GM Jiri Stocek of Czech Republic scored an unbeaten 7.5/9 to win Pardubice Open 2019. He finished a half point ahead of a group of nine players who scored 7.0/9. Top seed Czech no.3 Viktor Laznicka finished second due to a better tie-break score, followed by Sergei Movsesian of Armenia. Among the Indians, Deepan Chakravarthy was the best finisher with 6.5/9 at 11th position and Shardul Gagare also with the same points grabbed 13th position. The tournament was a big success for the Indians as we scored six norms - WGM norms for Rakshitta Ravi, Shalmali Gagare and Sahajashri CH, IM norms for Dushyant Sharma, Nikhil Dixit and Moksh Doshi. In this report we have annotated games by norm makers and also some very interesting videos shot by Rupali Mullick at the venue!

The 31st Czech Open International Chess Festival was held in Pardubice from 16th – 28th July 2019. Being one of the strongest and grandest chess tournaments of the Czech tour series, this event attracts some of the sharpest chess talents from around the world. IO Jan Mazuch has over the last 3 decades consistently improved and grown the chess culture in Pardubice, and worked tirelessly to organize international chess tournaments all over the Czech Republic from May to February every year. The Pardubice festival CZECH OPEN is the most famous of the whole series. For more information on the Czech Tour Series, visit here. 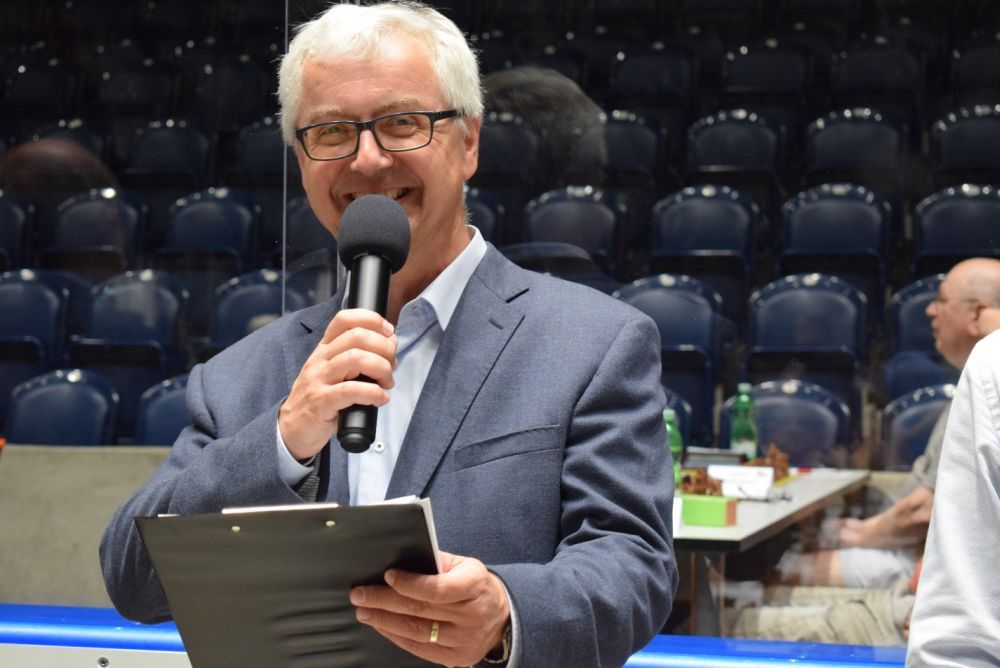 IO Jan Mazuch – the pioneer of Czech Tour Chess Tournaments | Photo: Rupali Mullick
Jan Mazuch's story is quite motivational. He went from organizing the first edition of Czech Open in Pardubice with 40 participants to it becoming one of the most popular tournaments in entire Europe! He is also the deputy mayor of Pardubice.

The CZECH OPEN Pardubice festival has various categories of chess tournaments amongst which the Grandmaster Open A is the main event for players with Elo >2100 and Open B is a rating tournament for players with Elo between 1700 and 2300. This year, there were 322 participants in the Grandmaster Open A tournament including 29 GMs, 5 WGMs, 58 IMs, 11 WIMs, 86 FMs and 8 WFMs. There were players from 37 countries with 81 players from various regions of the Czech Republic. There were 29 players from India with GM Deepan Chakravarthy at the top of the pack.

There were 6 players with 6.5 points after the eighth round. Draws on the first two boards was all the 8th seeded Czech GM Jiri Stocek needed, as he defeated GM Deepan Chakravarthy on the third board to comfortably secure the first place in the tournament with 7.5/9. ChessBase India spoke to Jiri after the tournament where he stated that this victory was extra special to him, as he had participated in this tournament for 26 years, also tied for first spot, but had never managed to win it with a clear margin! Jiri's patience finally bore fruit!

Jiri Stocek speaks about his victory, life in Czech Republic as a GM and more 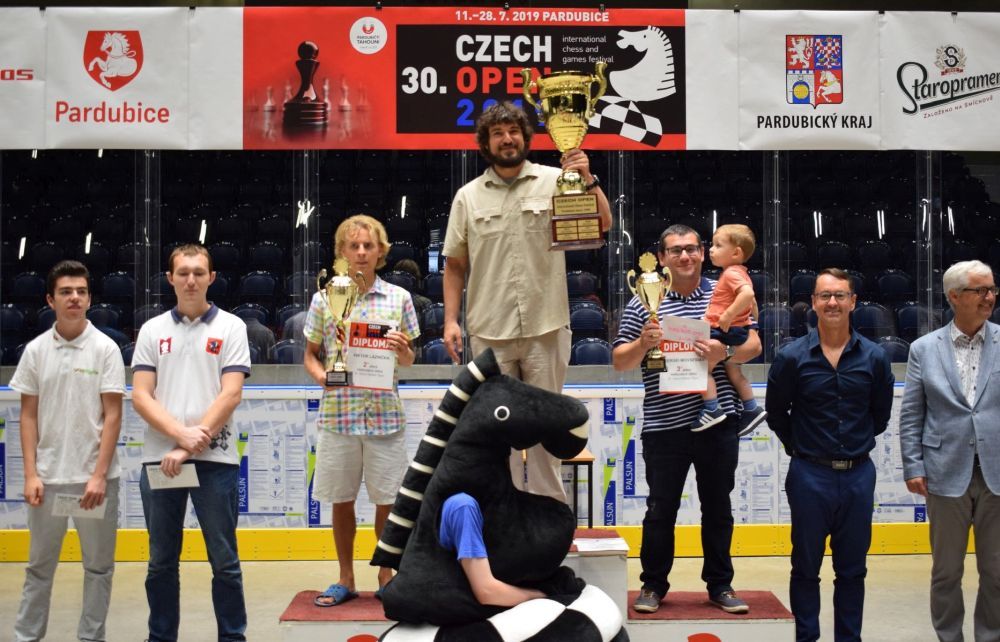 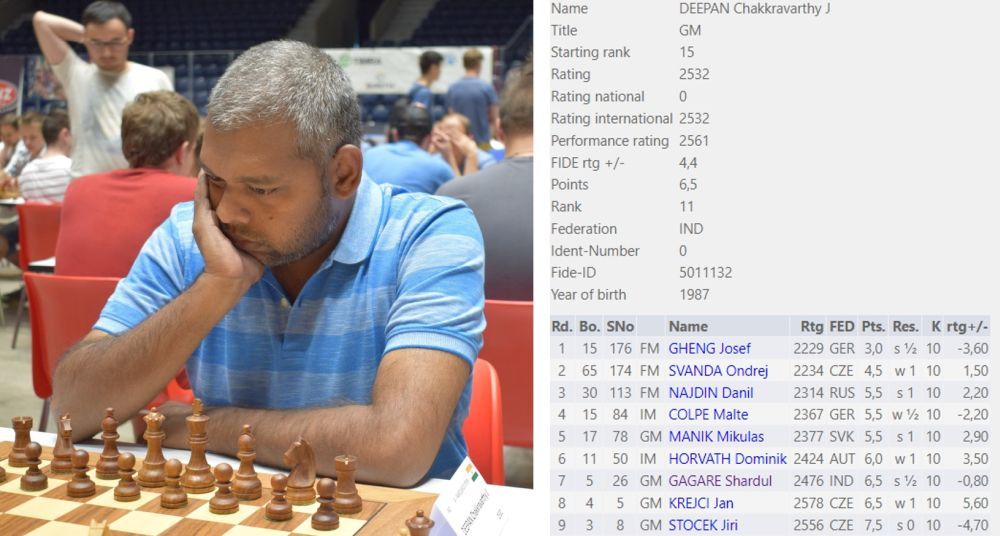 GM Deepan Chakravarthy had remained unbeaten in the tournament until the last round, but due to his last round loss against eventual champion GM Jiri Stocek, he finished at 11th place with 6.5/9 points | Photo: Rupali Mullick

Deepan played a very powerful game in round 8 to beat GM Jan Krejci. Have a look at how he sacrifices an exchange and brings home the full point. The knight was an absolute monster in this game: 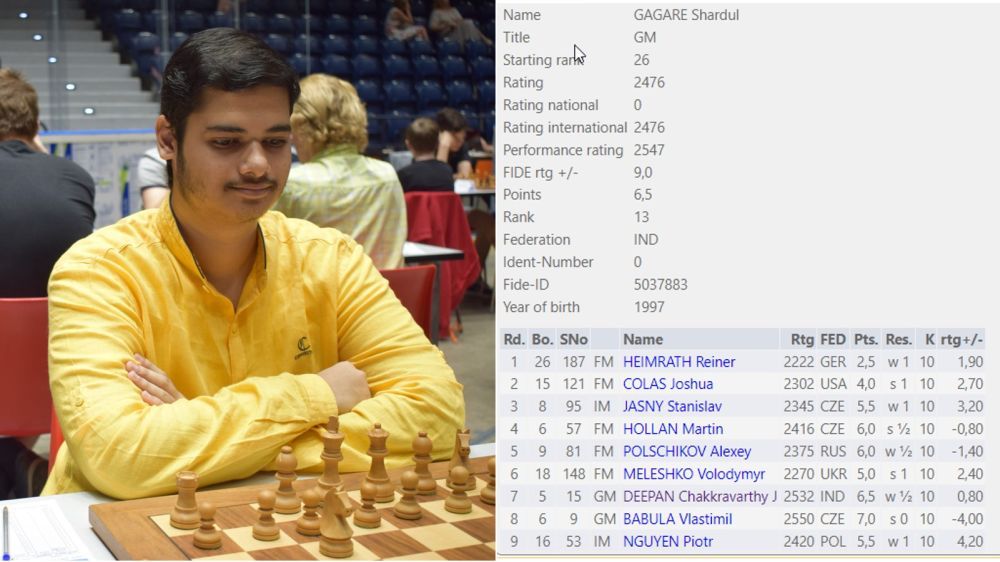 GM Shardul Gagare also played solid throughout the tournament, and after his only loss in the eighth round, came back to win the last round and secured the 13th place with 6.5/9 points | Photo: Rupali Mullick

Here is an annotated game by Shardul from his last round: 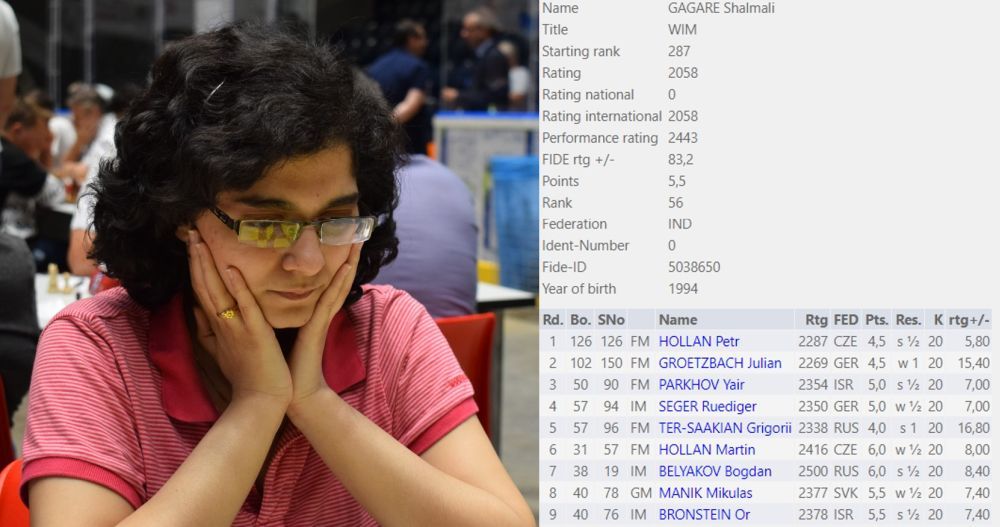 WIM Shalmali Gagare (Shardul's sister) also played excellent chess throughout the tournament, remained unbeaten scoring 5.5/9 and secured her maiden WGM norm with a round to spare and a performance rating of 2443. She missed her IM norm, as she drew her last round game with the black pieces | Photo: Rupali Mullick

Here is an annotated by WIM Shalmali Gagare from round 5 against FM Grigorii Ter-Saakian of Russia:

When Shardul Gagare began playing chess there was not a single rated player in Ahmednagar. Hailing from the village of Rahuri, Shardul and his family faced extreme difficulties to improve at the game of chess. As there were no players who could practice with Shardul, it was decided that his sister Shalmali should also learn chess! Within a year Shardul went on to become a under-7 national champion. He then won under-10 Asian title as well. Shalmali also moved from strength to strength winning the bronze in under-12 world championships. The brother-sister duo travelled together and annexed many a titles. Subsequently Shardul went on to become a grandmaster, and Shalmali a WIM. Together they have changed the landscape of Ahmednagar chess. From zero rated players, the city now boasts of over 100 rated players. This has been possible because of the untiring efforts of Shardul, Shalmali and their parents. Along their journey they received invaluable help from Narendra Firodia, who is sponsoring their chess journey and making sure that the sport grows in Ahmednagar. Apart from being a WIM, Shalmali is now also a dentist and Shardul is studying in the final year of his B.A course. At the Czech Open 2019 in Pardubice, Shalmali made her first WGM norm, while Shardul finished 13th. ChessBase India caught up with the siblings and did a detailed interview with them. 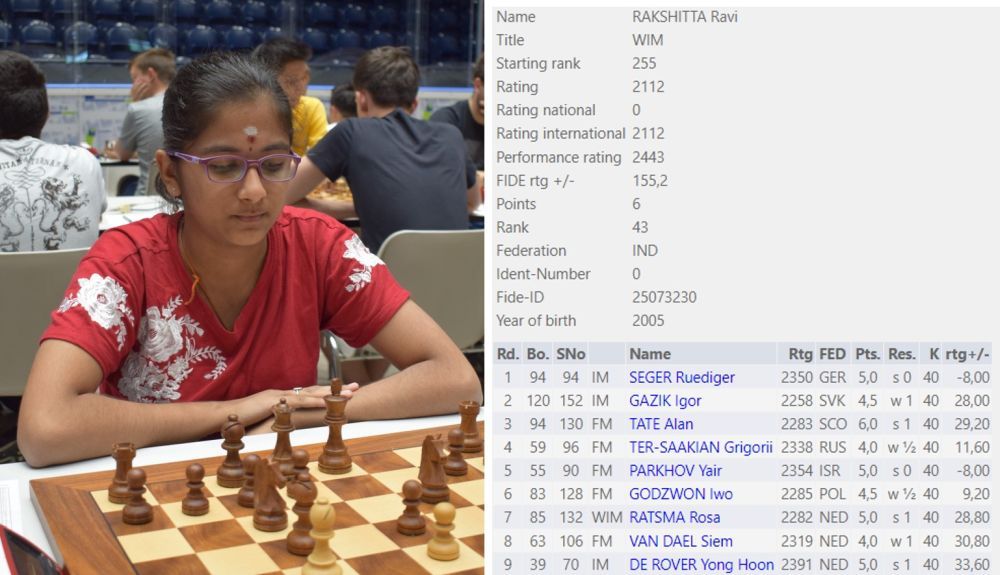 14-year-old WIM Rakshitta Ravi had an excellent run in Pardubice: she finished on 6.0/9 with a 2443 rating performance, gained 155 ELO points and secured her maiden WGM norm, just missing her IM norm by a whisker | Photo: Rupali Mullick
Rakshitta has had a tough year and missed many chances at her WGM norms. This performance has given her the much needed boost. Rupali Mullick caught up with the young talent after the tournament

WFM Sahajasri Cholleti also secured her WGM norm with a score of 5.0/9 and a performance rating of 2416 | Photo: Rupali Mullick 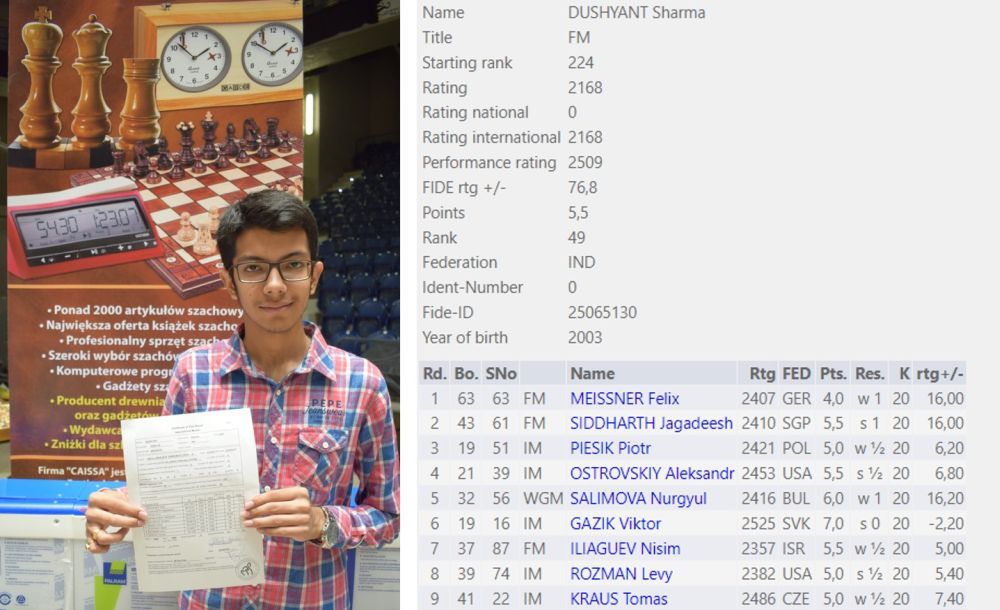 FM Dushyant Sharma had a fabulous tournament, scoring 5.5/9 and gained 77 ELO points. With a performance rating of 2509, he ensured an IM norm for himself | Photo: Rupali Mullick

Dushyant annotates his best game from round 5 against WGM Nurgyul Salimova: 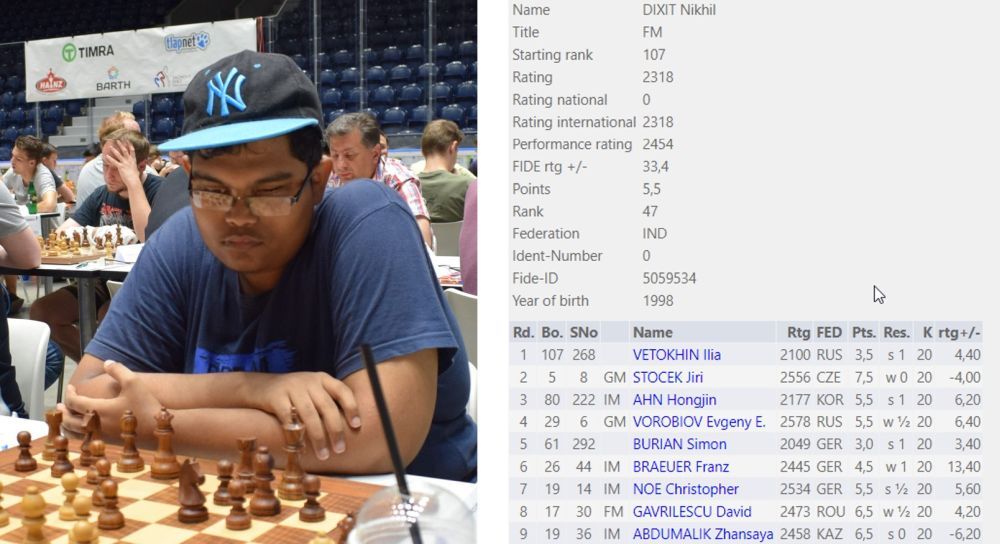 FM Nikhil Dixit also played strong and steady chess to secure his second IM norm with a round to spare, scoring 5.5/9 points and a performance rating of 2454. In spite of being visually impaired in one eye Nikhil is competing with sighted players and playing so well. This is truly commendable. | Photo: Rupali Mullick

Gujarat lad, Moksh Amit Doshi also had a great run in Pardubice, gaining 55 ELO points. He scored his 5th IM norm at the event, with a performance rating of 2467. Moksh’s rating after this event is 2343. The youngster just needs one more tournament like this one to help him become achieve his IM title | Photo: Rupali Mullick