After a splendid win in the previous round, Viswanathan Anand suffered a tragic loss at the hands of Fabiano Caruana in the eighth round of the Altibox Norway Chess. With just one round to go, Anand barely has any time to recover and win the event. His only hope lies in winning the next game and praying that the top two boards end in draws so he could catch up with the leaders. Hikaru Nakamura also joined the leaders beating Sergey Karjakin in the penultimate round. The other two games finished peacefully: Magnus Carlsen was held by Mamedyarov while Wesley So drew against Maxime Vachier-Lagrave. Round 8 report.

The penultimate round of Altibox Norway Chess 2018 witnessed the most number of decisive games in a round so far; two out of the four games of the round concluded with a decision. Unfortunately, the Indian ace, Vishy Anand, was at the wrong end of a decisive game against Fabiano Caruana. The other victor of the round was also an American: GM Hikaru Nakamura.  Nakamura enjoyed a relatively easier win against Sergey Karjakin, who messed up in the opening.

Caruana, who had the black pieces, put his faith yet again in the Petroff Defence with the black pieces. It has been a while now since the American number one has been experimenting with this opening with a fair bit of success. Also, the depth of his preparation has been very impressive. So much so, that even the world champion, Magnus Carlsen chose to sidestep the line altogether when he played Caruana in the inaugural round. 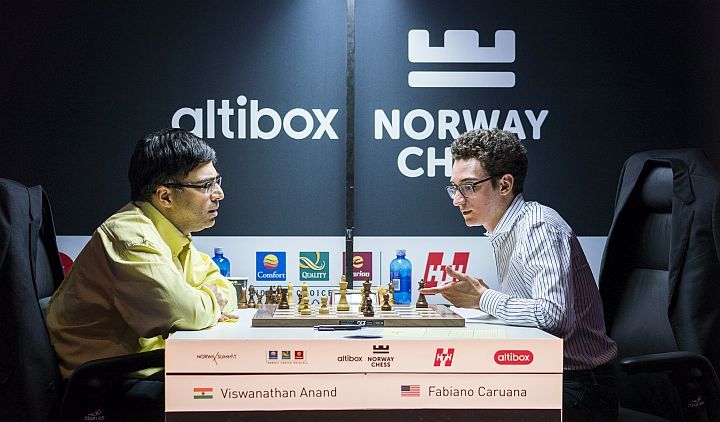 Anand chose to take the bull by the horns, though and went for the old main line of the opening. Caruana’s decision to expand on the kingside after having castled there looked a little odd at first glance. Further, he even allowed Anand to double his central pawns. But as it turned out, Caruana was well aware of what he was doing.

“It looks very anti-positional but, concretely, it’s quite dangerous for white,” Caruana said, talking about his opening. Caruana also pointed out that a critical moment came on the 14th move when Anand could have played 14.Qb3 instead of 14.Nbd2 and the ensuing complications seemed to favour white. 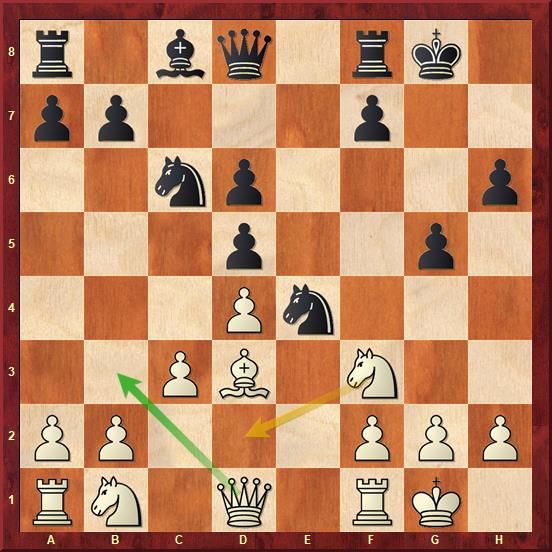 Here, Anand went for 14.Nfd2 instead of the critical line with 14.Qb3

This was sort of a bluff,” Caruana said. “I had analyzed it but it’s not good for black”. Further, explaining his choice of a dubious line, he added, “At least, I put pressure on him this way and I have my own chances to take over the initiative.”

When asked why Anand did not play the line, Caruana said: “We both saw this move. I guess he (Anand) saw some variation which concerned him a bit. And maybe he was worried that there was some sort of preparation behind it.”

After this Caruana got a comfortable position and began to press for the advantage. Soon, Caruana’s pawns and pieces began flooding in. Anand tried to hold on by giving up an exchange for two pawns. After a forced sequence of moves, the black queen and rook came marauding in. Anand tried to defend by fleeing with his king to the centre but this hardly helped. By the 50th move, Anand decided to throw in the towel.

For Anand, this loss means he will have to win in the final round and pray that the games on the top two boards finish in draws in order to join the leaders. If he draws or loses, however, he will have no chance at the title. 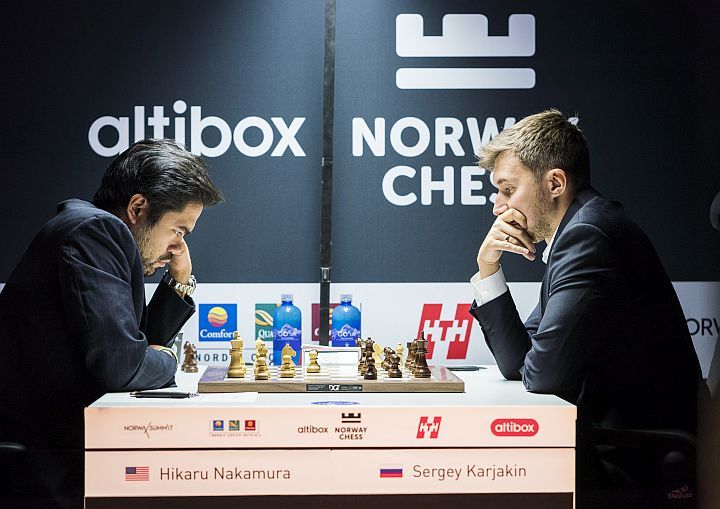 Karjakin was caught in some old preparation of Nakamura | Photo: Lennart Ootes

The other decisive game of the round, Hikaru Nakamura against Sergey Karjakin, was also the first game to finish in round eight. After a little more than three hours, the American number three had demolished his opponent. Karjakin was simply caught off guard in the opening. Just a few moves out of the opening, Karjakin was put under tremendous pressure by his American opponent and before the 20th move, horrible threats loomed around his king.

Karjakin survived the middlegame by giving up an exchange to liquidate into an endgame. But this was just a case of ‘out of the frying pan and into the fire’. The endgame provided no relief. One by one, all of black’s pawns were hacked off the board and by the 41st move, Karjakin had to resign. 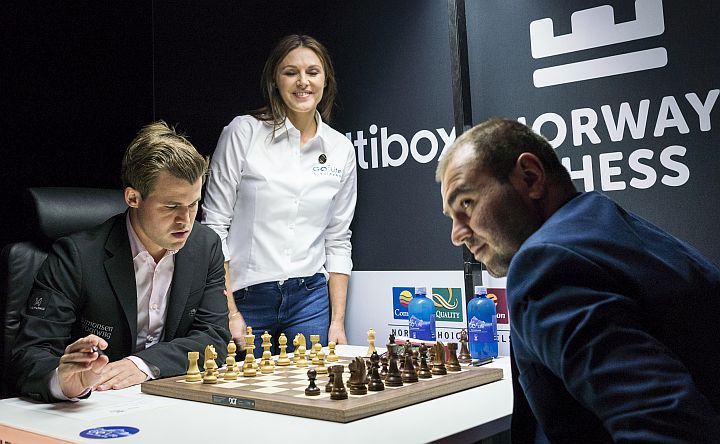 Mamedyarov played his last round of the tournament against Magnus Carlsen | Photo: Lennart Ootes

As play progressed, well timed central pawn breaks helped Mamedyarov liquidate into an endgame with both sides having a rook and a pair of bishops. Keeping up his solid play, Mamedyarov exchanged more pieces to enter a pure ‘bishops of opposite colours’ endgame where he had no problems forcing a draw.

With this draw, the tournament has come to a close for Mamedyarov. He was to play Ding in the final round but due to the Chinese player’s withdrawal, one round had to be cancelled. With a score of 3.5/8 is currently placed fifth. But he is sure to go down the leaderboard as other players play their final round and score some points to get past him. 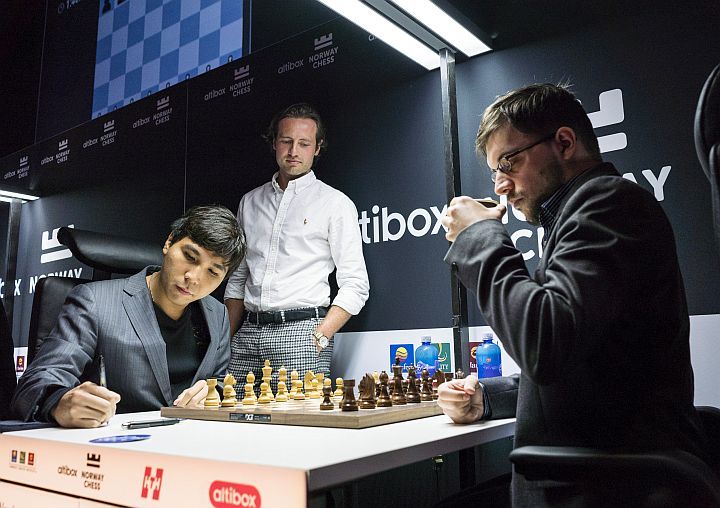 Wesley So and Maxime Vachier-Lagrave played the longest game of the round | Photo: Lennart Ootes

Wesley So had to play an 80-move-long marathon against Maxime Vachier-Lagrave before he could sue for peace in the penultimate round. With the white pieces, So chose the quiet 6.Be2 line against the Frenchman’s Najdorf which led to some interesting skirmishes on the queenside and in the centre. But once the dust had settled, So had entered a rook endgame with a pawn deficit. Theoretically, the endgame was a drawn one but Vachier-Lagrave decided not to let the American off the hook until he proved the theoretical draw over the board. It took Wesley a few moves, but he did succeed in splitting the point.

Going into the final round, the race will mainly be between four players: Magnus Carlsen, Wesley So, Fabiano Caruana and Hikaru Nakamura. Anand, with his loss today is half a point behind the leaders at 3.5/5. He has a chance of catching up with the leaders if he wins his game while both the top games are drawn.