Today Nihal Sarin turns 14 years old. He is one of the brightest chess talents of Indian chess. As on today we can all see his sparkling games and some of his fantastic victories to know the chess player he is. He already has a rating of 2551 and two GM norms at this tender age. But how did this boy develop into such a strong chess player? We go back in time and look at an important episode in Nihal's chess career that took place in the year 2012, when the boy was just 8 years old. This short anecdote tells us why Nihal is different from all the kids of his age.

"Listen to everyone, but decide for yourself"

The 2nd Fide International Rating Chess Tournament was organized by Kottayam Chess Academy in association with Kottayam Public Library under the auspicious of Chess Association of Kerala and All India Chess Federation from 27th December to 30th December 2012 at K.P.S.Menon Hall. This event has attracted 192 players from Goa, Karnataka, Kerala, Puducherry, Tamil Nadu and a foreign player from France.

Out of this, 113 players were rated players. The top billing was given to Linda Rangarajan of Puducherry. The Young children Varshini, Muthaiah, Easwar from Tamil Nadu and Nihal Sarin and Arjun from Kerala occupied the top tables and caused a fear wave to the senior players. The 8 years old Thrissur boy Nihal Sarin round by round attracted everyone.

At last 8 years old boy Nihal beat Linda the top-seeded and shared the first place with Muthaiah.' A lot of people advised Nihal to take a draw in the final round. Linda needed just a draw to win the title. Also, Linda was rated about 700 points above Nihal. Nihal's father Sarin Abdul Salam instead asked his son to decide on his own."Listen to everyone, but decide yourself", he said. Nihal declined the draw and squeezed out a win. Nihal Sarin's father still says that seeing the final stages of that game and seeing him win it was his proudest moment to date. 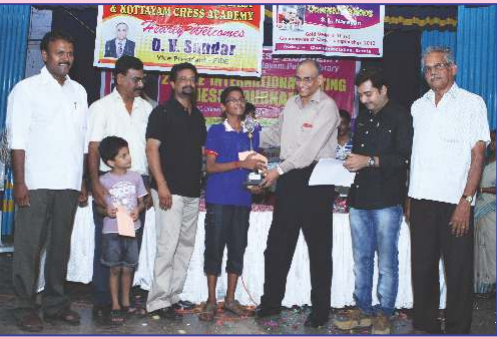 Al Muthaiah gets the winner's trophy. Little Nihal is on the left!

Nihal Sarin is one of the biggest chess prodigies in the world. He is just 14 years old and already has a rating of 2551 and two GM norms. When he beats strong players like Hammer, Georgiev etc. one question is natural: How did this kid become so strong? There is no better person to talk about this than Nihal's father. Dr. Sarin speaks about what makes his son special and at the same time he also gives priceless advice to all the chess parents in this video.

This video contains advice gained over years of experience and can be useful for all chess parents. High quality stuff!

This is the first video of Nihal ever captured - It was taken in 2014 World Juniors and was entitled as the "Boy who never sits!" Subsequently this title has stuck to Nihal over the years!
Nihal Sarin's first interview in the commentary room of World Juniors 2014
We can tell you this - A top 10 ranked World GM asked us before his crucial game, "This video of Nihal Sarin is fake, right? How can someone solve so quickly!"
Nihal Sarin decimates Evgeny Postny in blitz!
One of Nihal's detailed interviews at the World Youth 2017
How good is Nihal Sarin? This video reveals his level of play
Nihal launches a thrilling mating attack against 2479 rated Aryan Gholami
Nihal on his secret of not sitting on the board!
One of Nihal's latest interviews in May 2018
Interview with Dr. Shijin, Nihal's mother