National School championship takes place every year in six different age group categories. This time it took place in Raipur, Chattisgarh from 3rd-7th April 2019. Total 926 players participated from 23 different states and 2 union territories across the country. While Telangana won the maximum number of podium finishes (6) in the entire tournament, Maharashtra won the maximum number of categories - 2. The tournament was inaugurated by R P Dubey, Chancellor of Dr CV Raman University and the Chief Guest of Prize Distribution Ceremony was D V Sundar, Honorary Vice President of FIDE. Ayush Sharma of Madhya Pradesh was the highest rated player in the entire event having the rating of 2051. Photos: Vasanth B H

The biggest National for school children 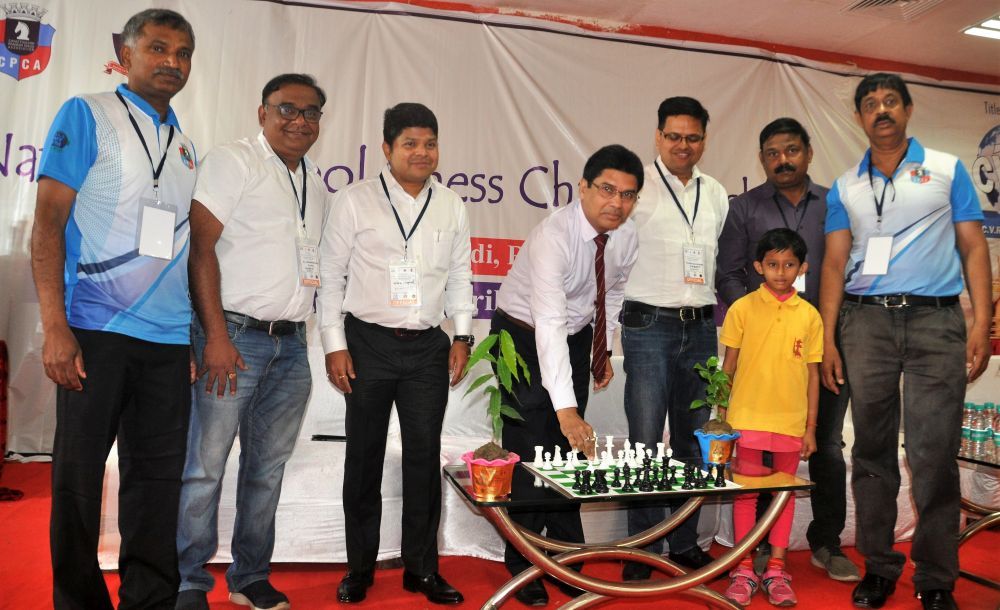 Inaugural move is being made | Photo: Vasanth BH 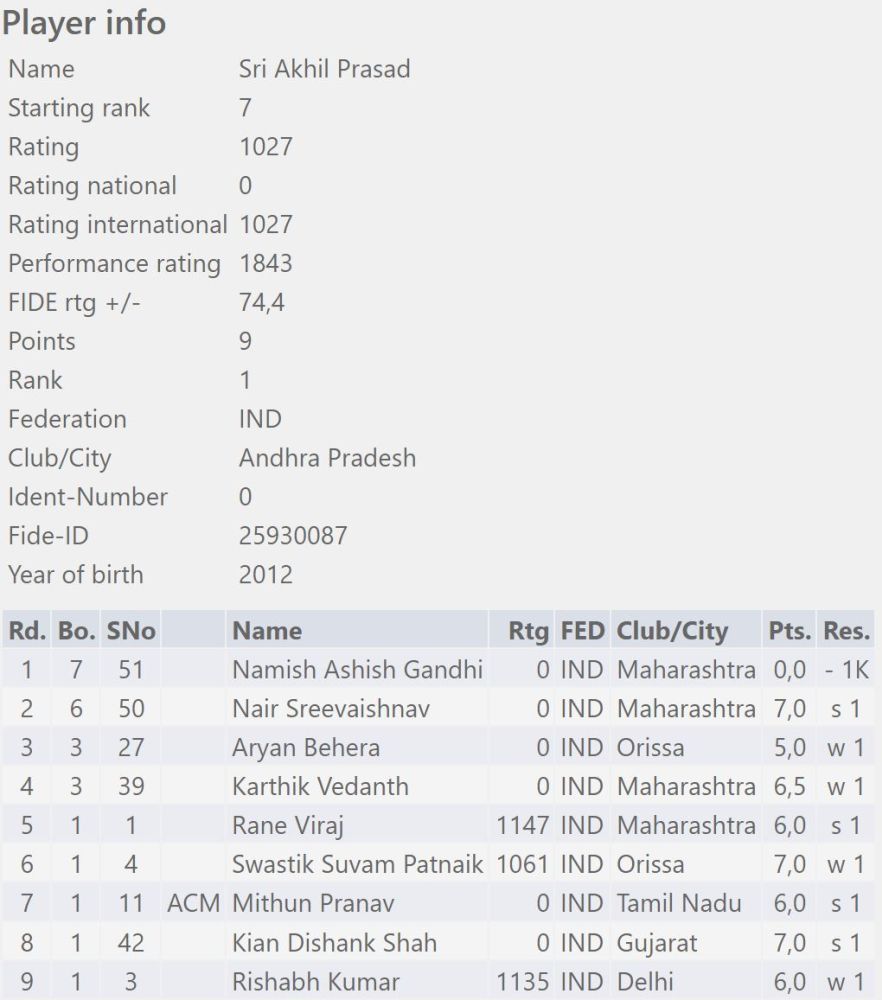 With a performance rating of 1843 and his opponents average score being 6.0+, Akhil definitely played some fantastic chess and has miles to go

6-year old Akhil Prasad, who is the current Andhra Pradesh under-7 state champion, made a perfect score of 9.0/9 to become National under-7 school champion in open category. 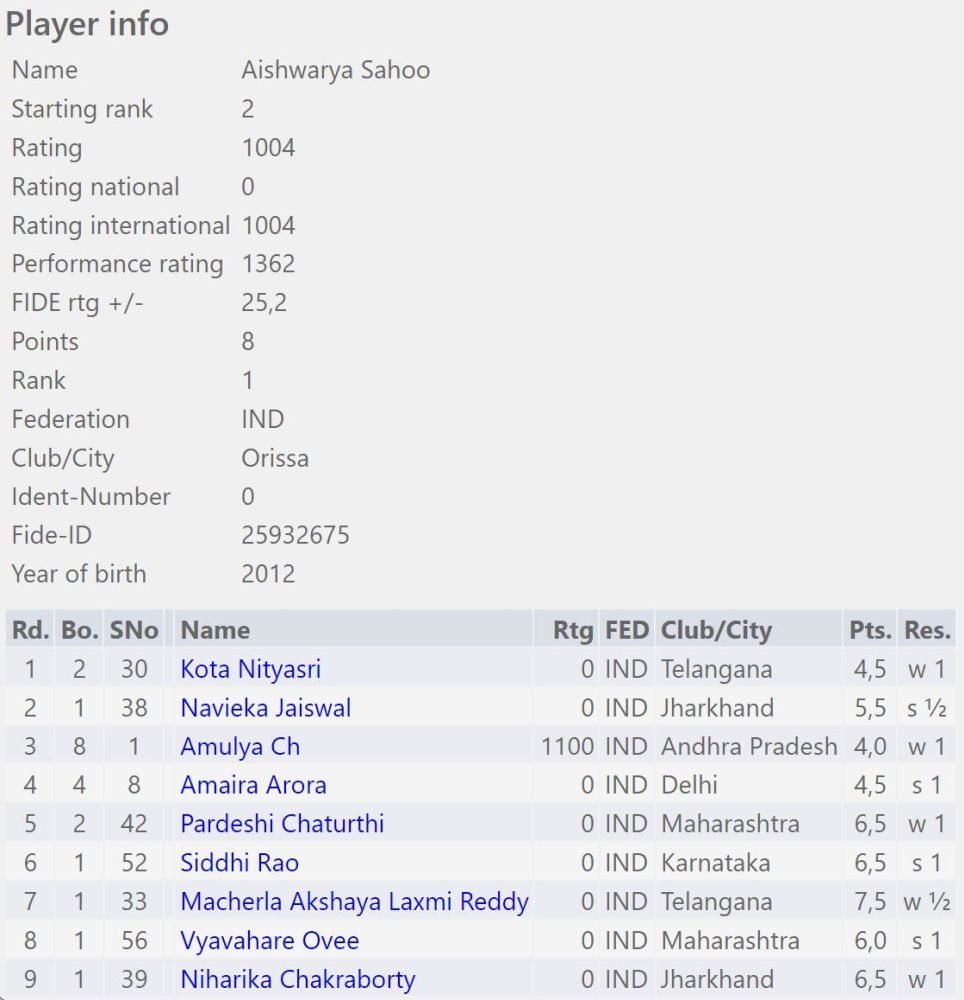 Aishwarya scored unbeaten 8.0/9 and increased her rating by 25 ELO points

Starting out as the second seed, Aishwarya Sahoo of Odisha made her maiden mark at National School by winning the under-7 girls category. This is her first championship victory in her chess career. 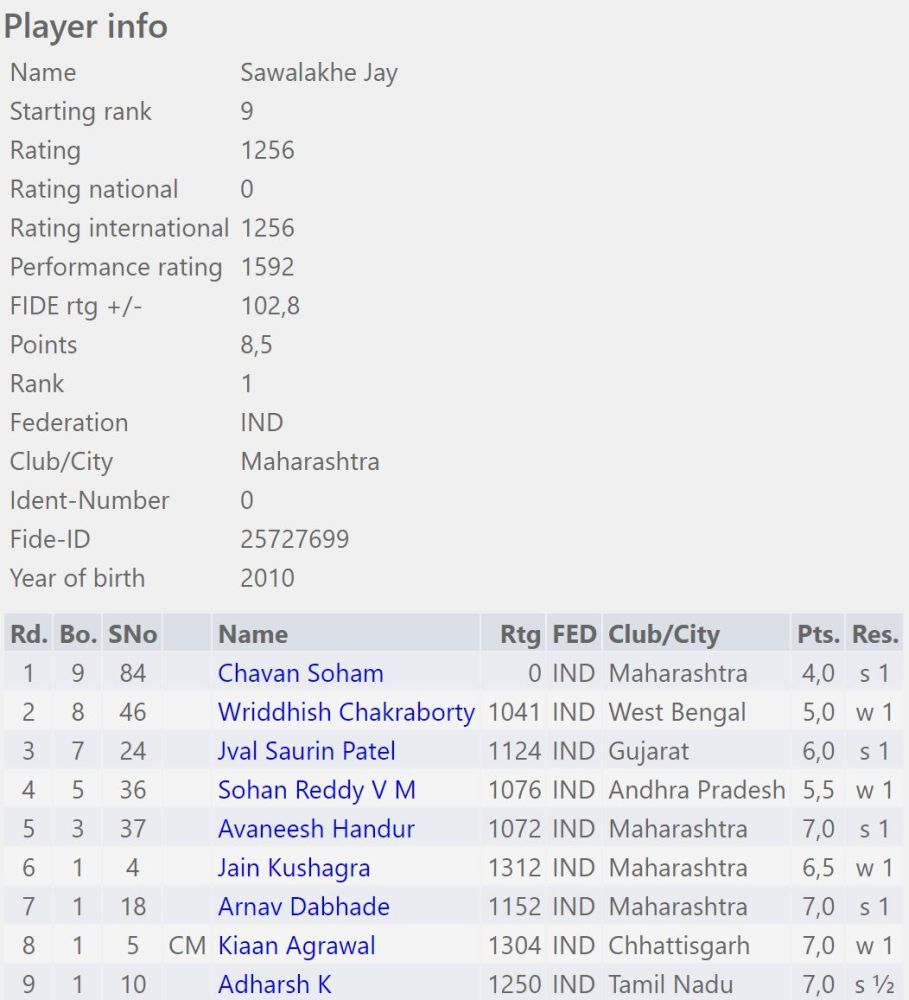 Sawalakhe won the tournament in the penultimate round as he scored eight straight wins, resulting in a 1.5 point lead heading into the final round which means he became a champion with a round to spare as he took an unassailable lead. This was Sawalakhe's maiden triumph in National level. He secured third position in Nagpur district under-9 open days before starting for this tournament. 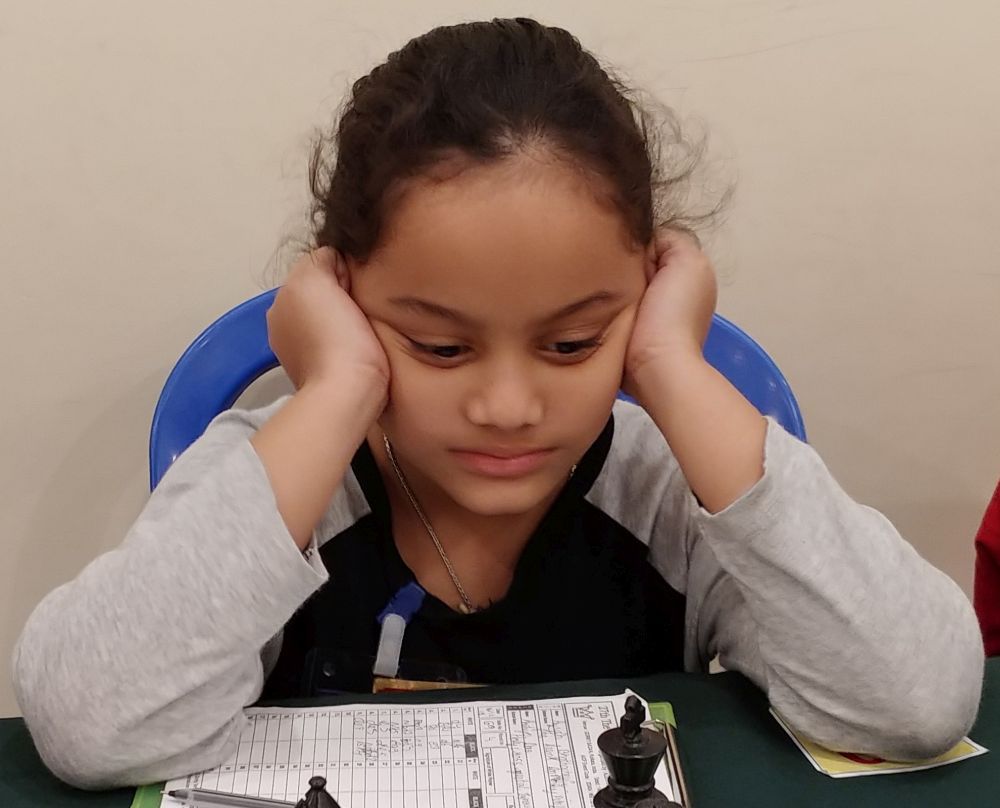 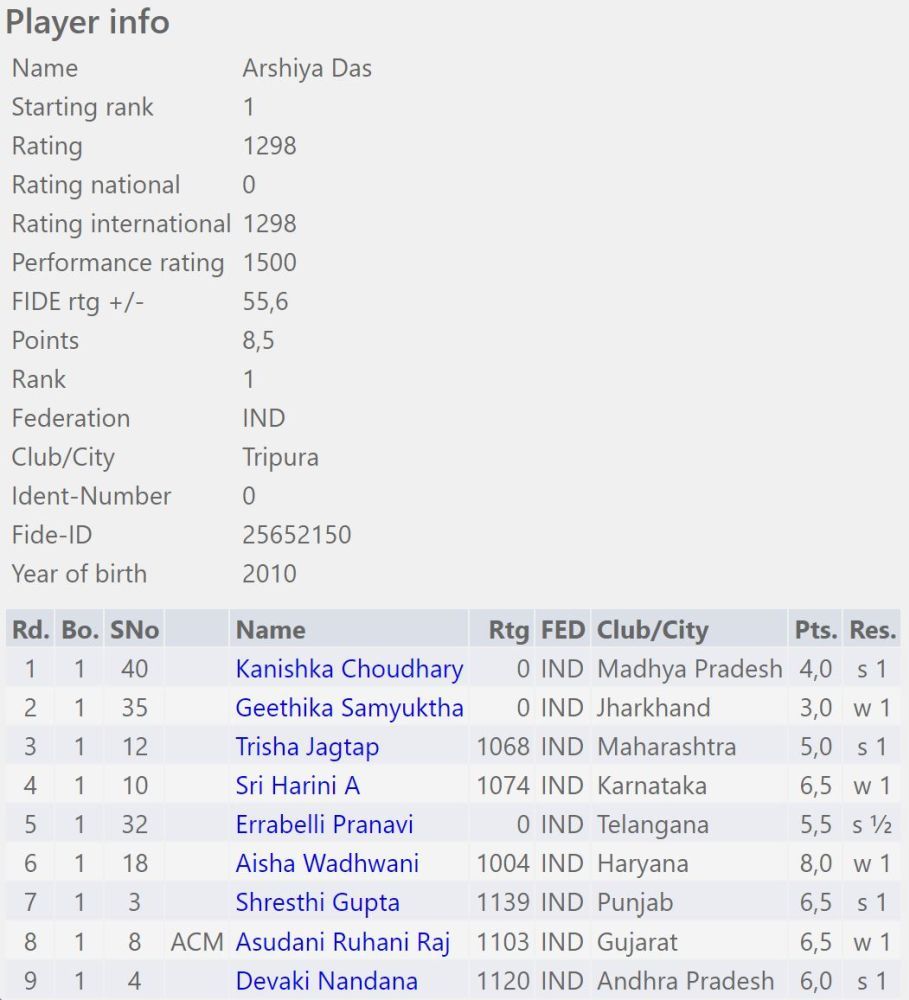 Starting out as the top seed, Arshiya Das maintained her composure and won the tournament emphatically by scoring 8.5/9

Reigning State under-9 girls champion, Arshiya Das of Tripura struck her maiden Gold at National School by scoring 8.5/9 with a performance rating of 1500. 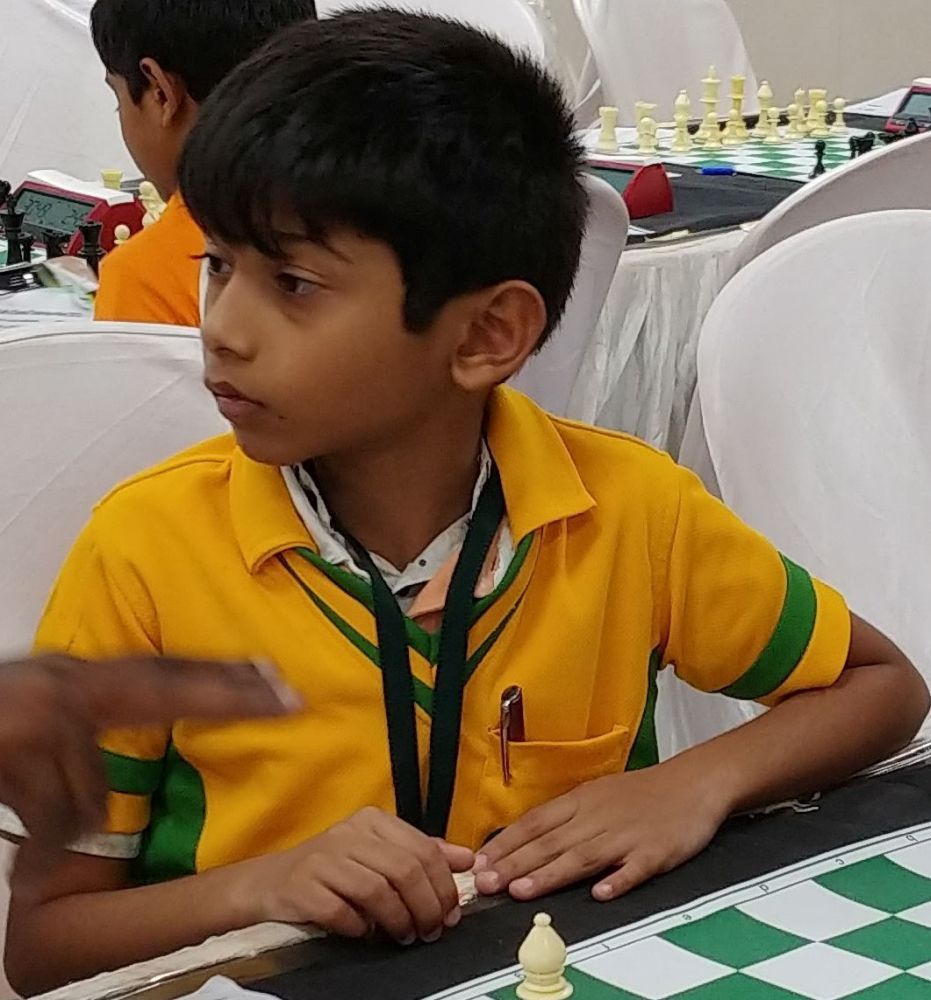 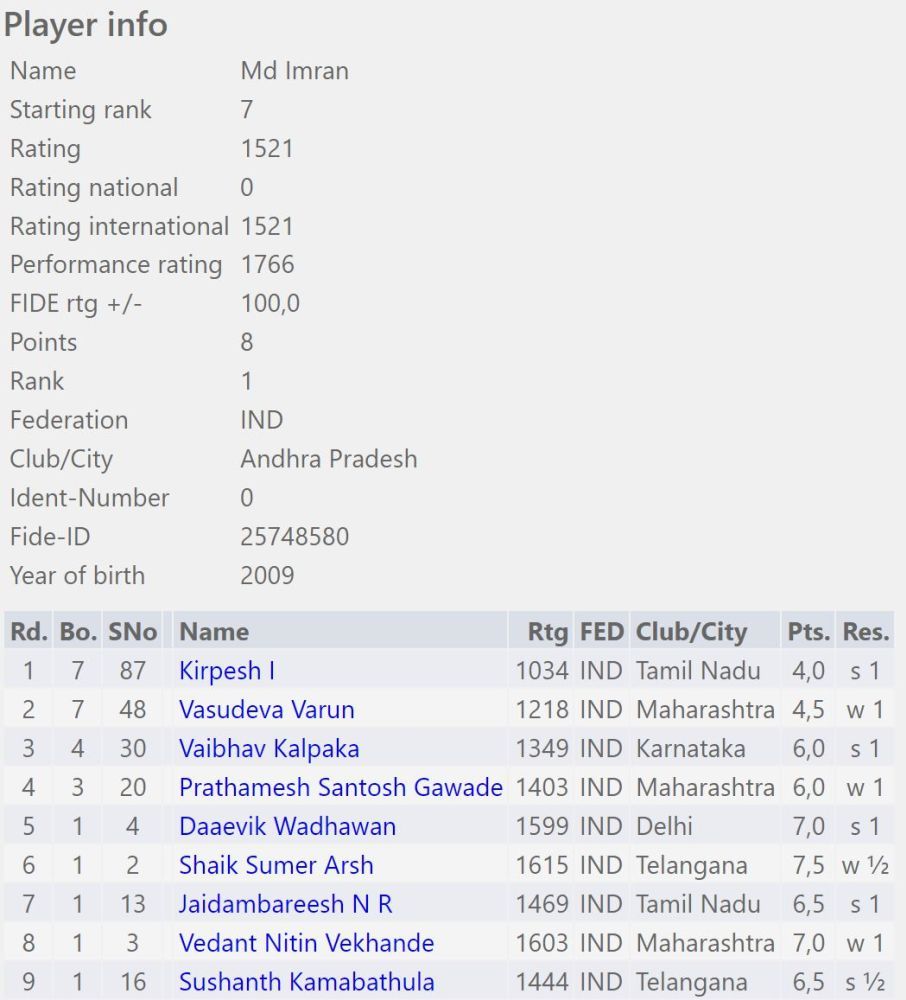 Imran won a Gold scoring 8.0/9 and with a performance rating of 1766, he increased his ELO Rating by a perfect 100 points

Md Imran of Andhra Pradesh won a below 1500 rating tournament last year. Since then this is his first major triumph in National School. Winning a Gold in under-11 open category at the age of 9 years is certainly an amazing feat. 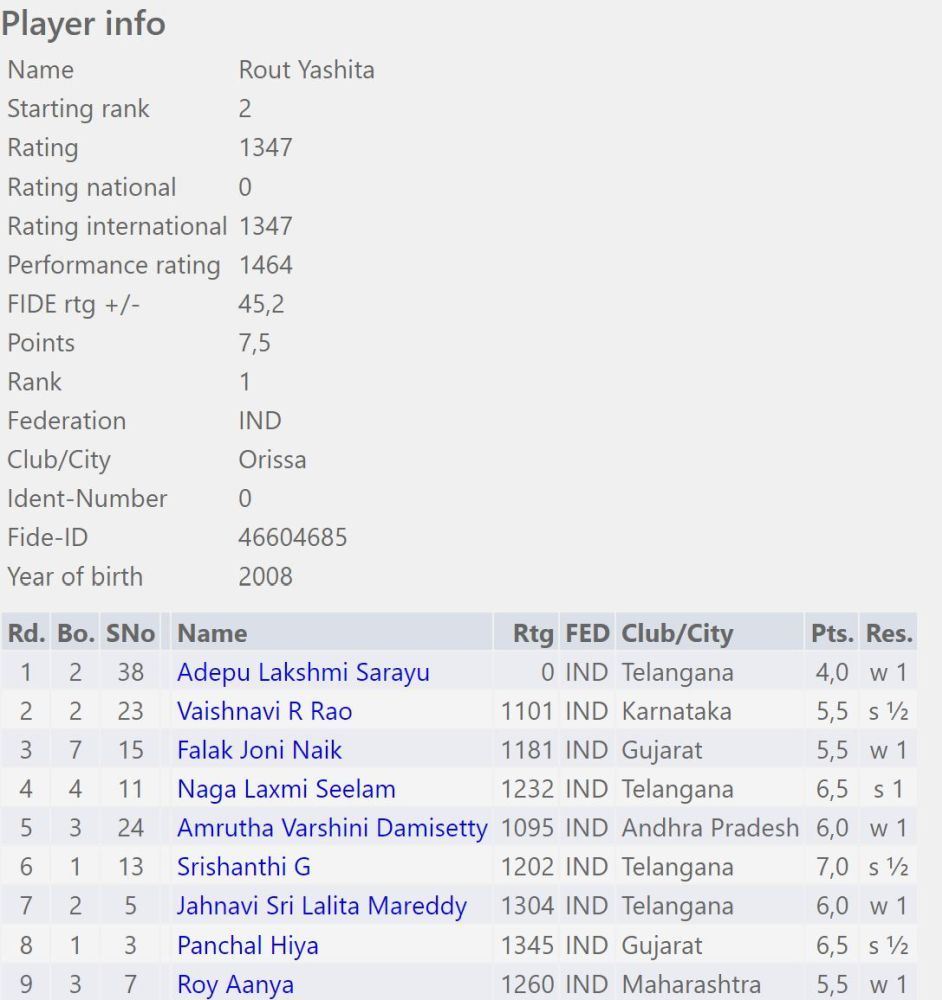 Yashita Rout is the current runner-up in Odisha State Women's. She scored 7.5/9, remained undefeated to win Gold in under-11 girls category. 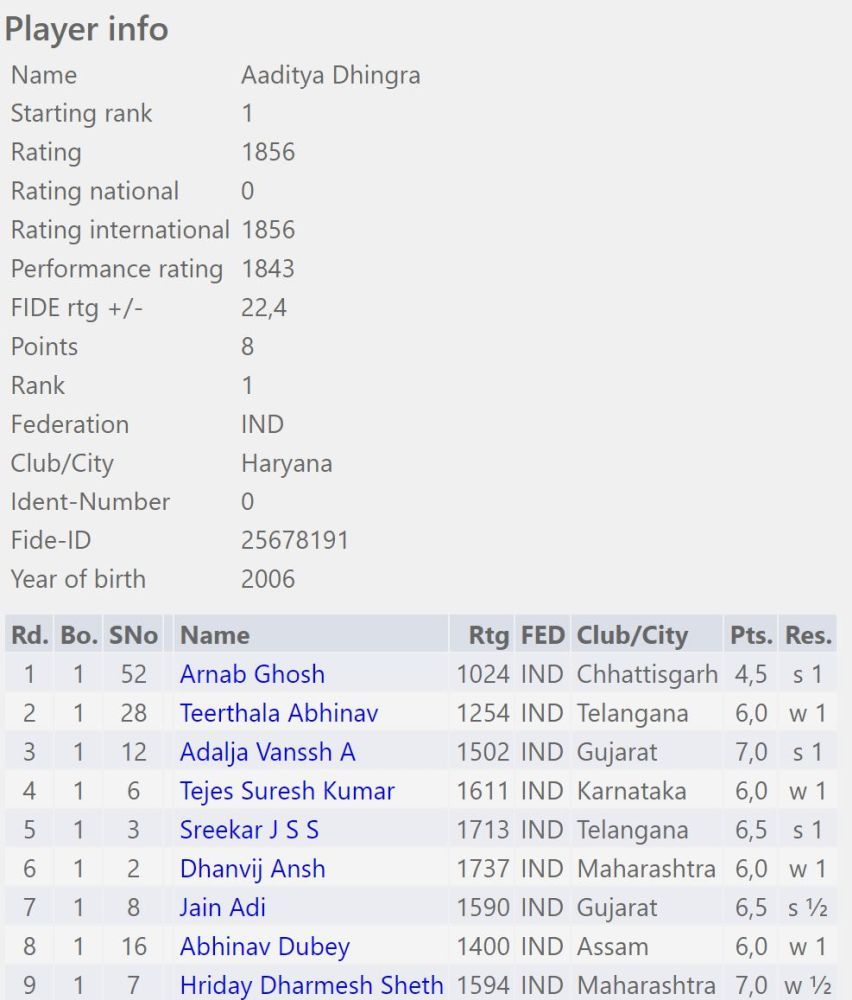 Top seed in his category, Aaditya Dhingra of Haryana scored 8.0/9 to become a champion. He took a full point heading into the final round and needed just a draw in the last round to become champion. Just days after winning National under-13 open, he won Haryana State under-13 boys. 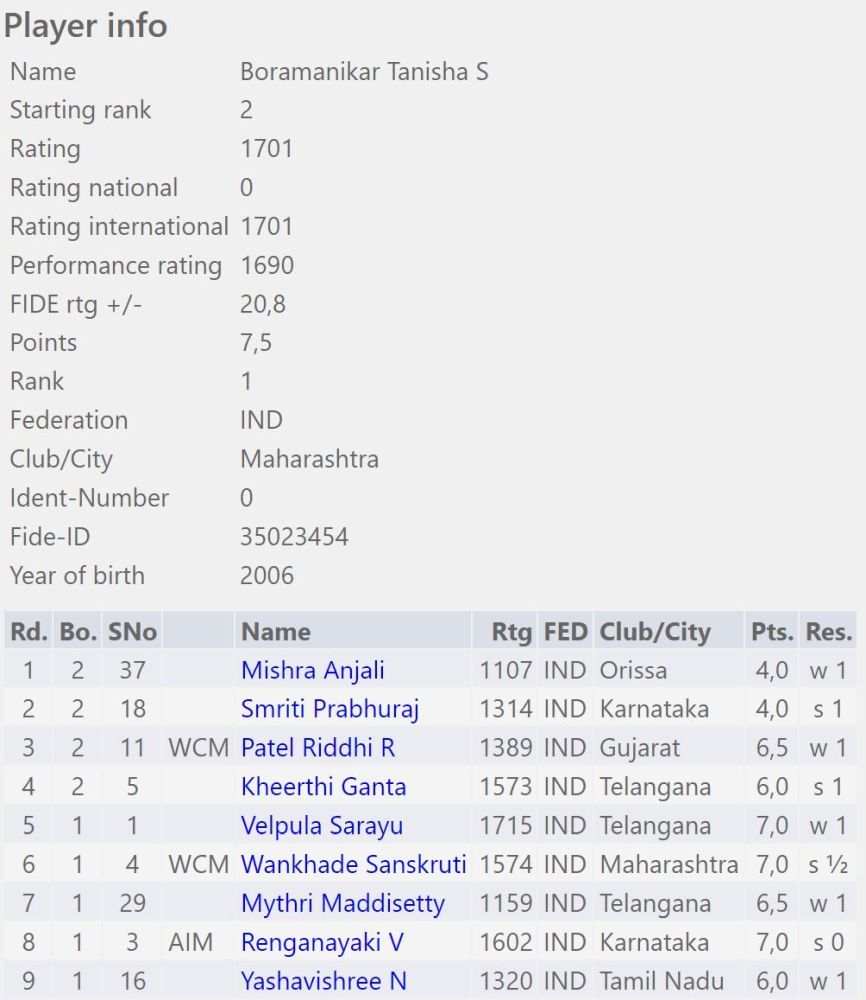 Despite suffering a loss in the penultimate round, Tanisha Boramanikar of Maharashtra did not let her spirits down. After winning Gold in National School under-13 girls, Tanisha went back to play Maharashtra State under-13 girls and finished at 2nd position. 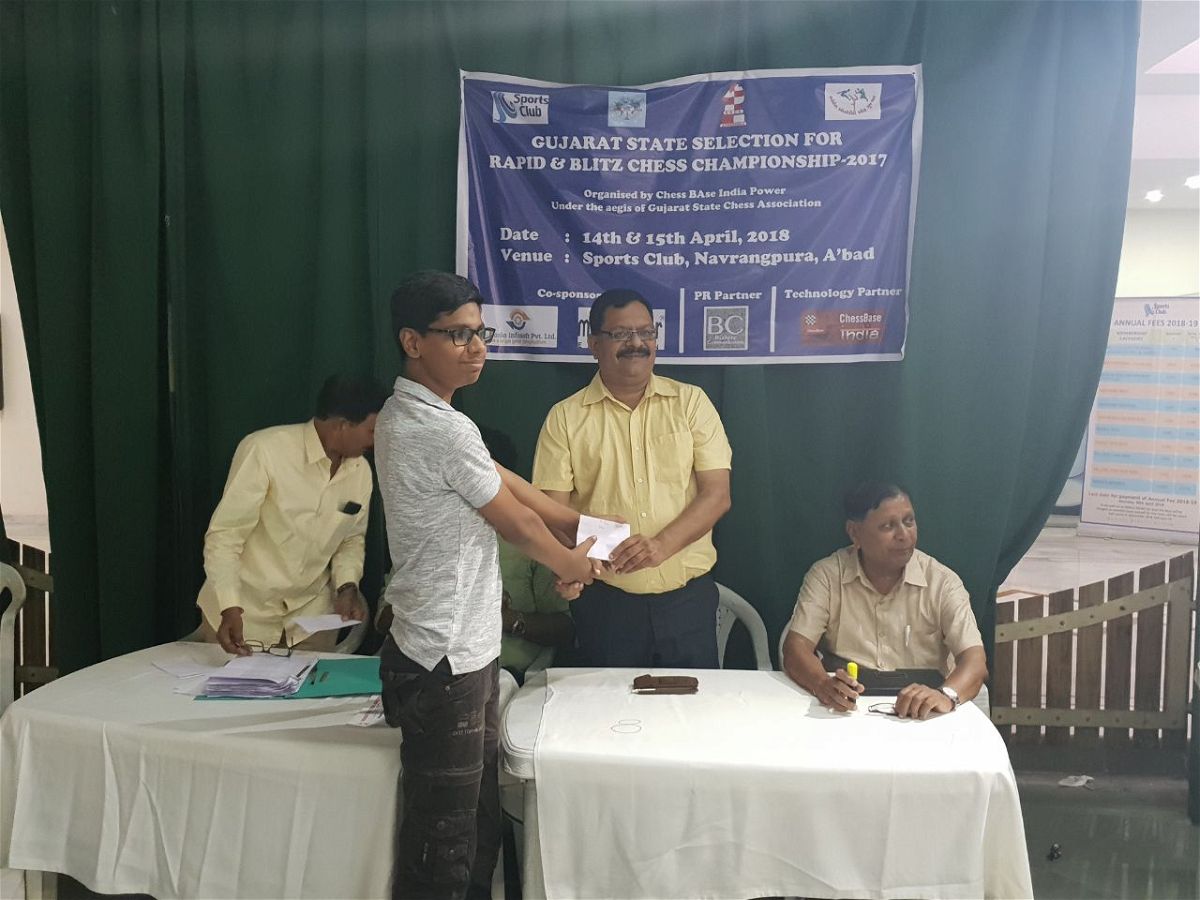 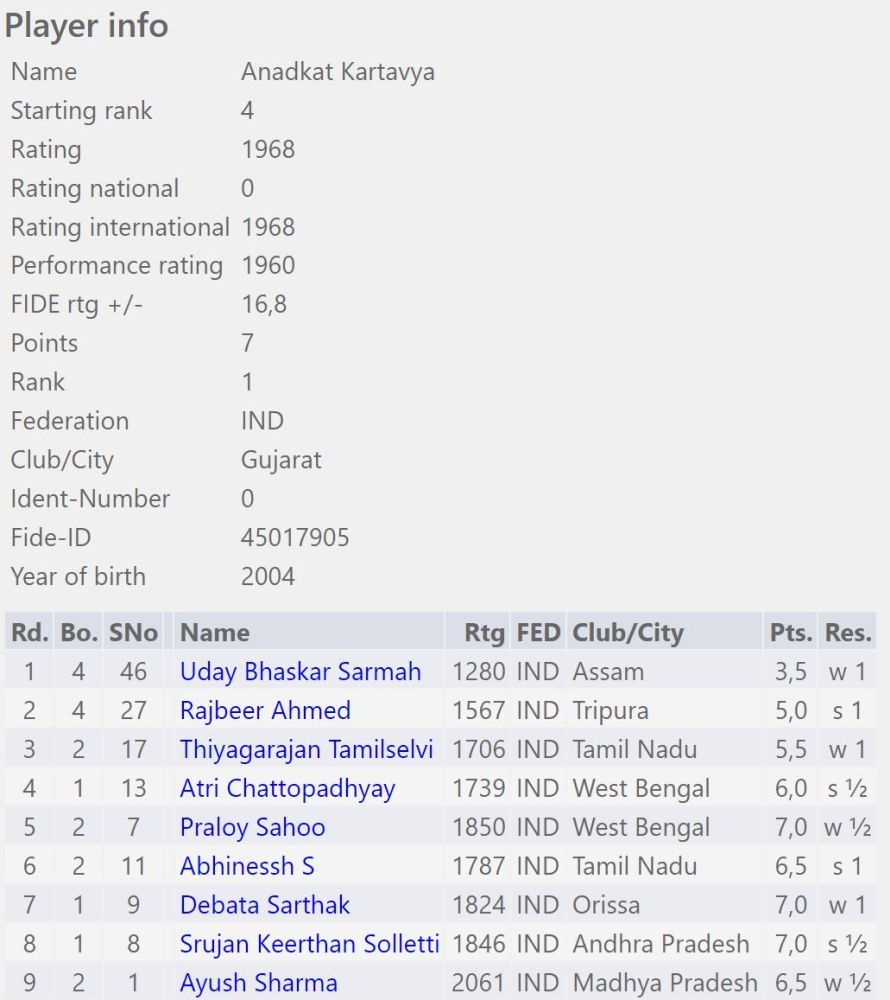 Reigning Gujarat State under-17 and under-19 boys champion, Kartavya Anadkat delivered an unbeaten performance, scoring 7.0/9 to win under-15 open category. 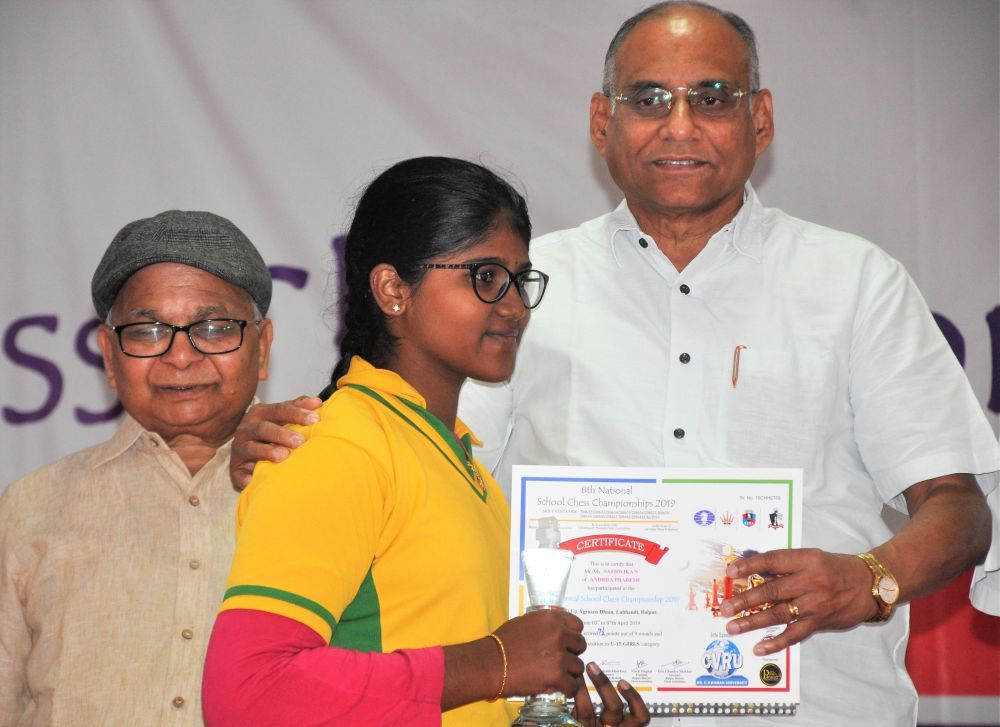 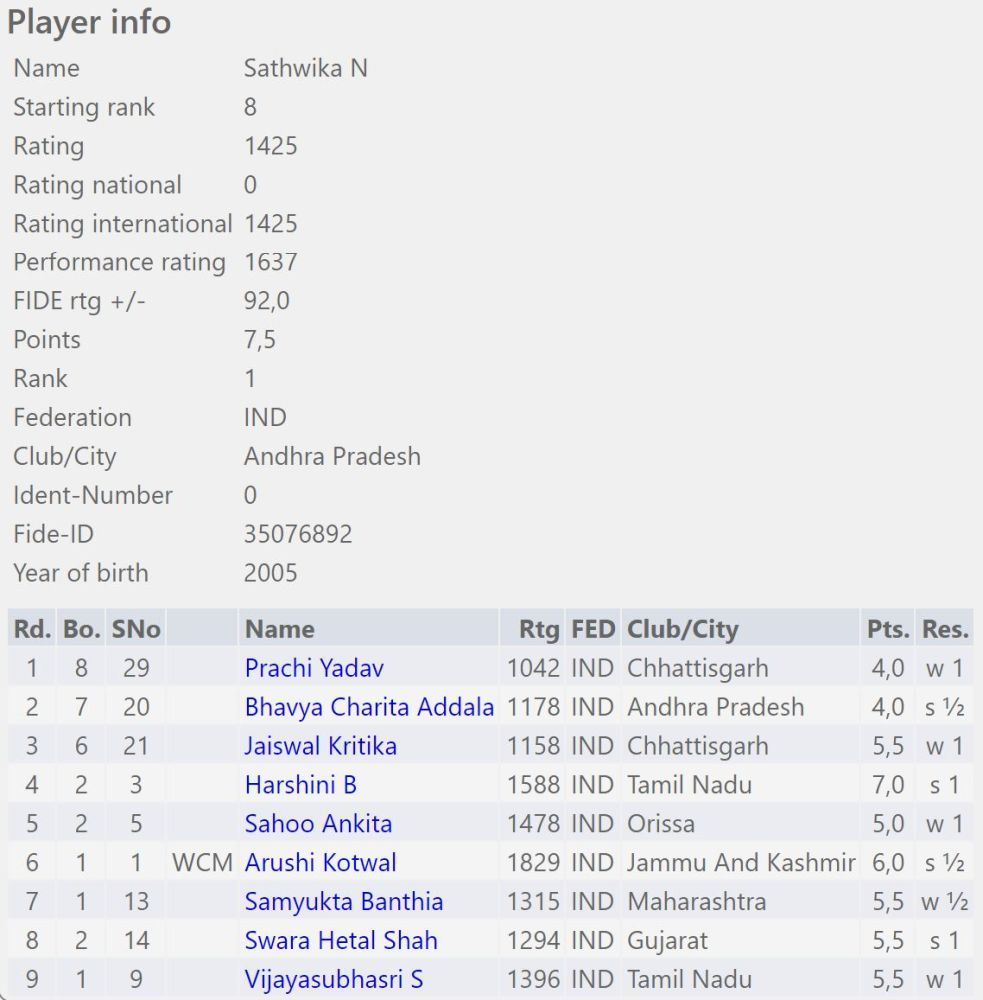 Sathwika N of Andhra Pradesh scored 7.5/9 with a performance rating of 1637, increased her rating by 92 ELO points, remained unbeaten to clinch Gold in under-15 girls. 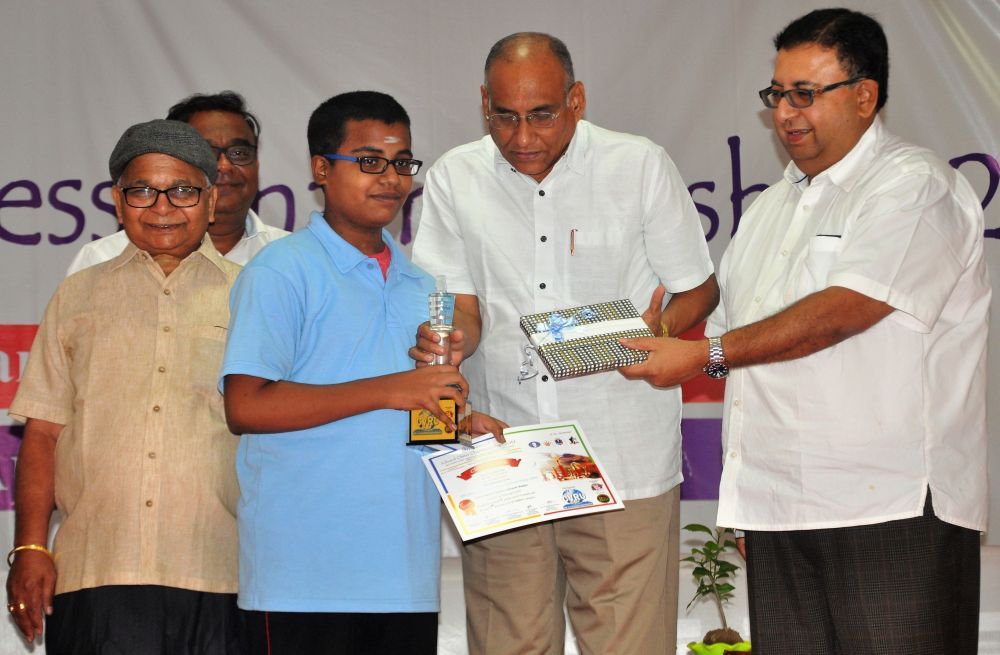 Yutesh receives his championship trophy, gift and a certificate from D V Sundar and Ravindra Dongre | Photo: Vasanth B H 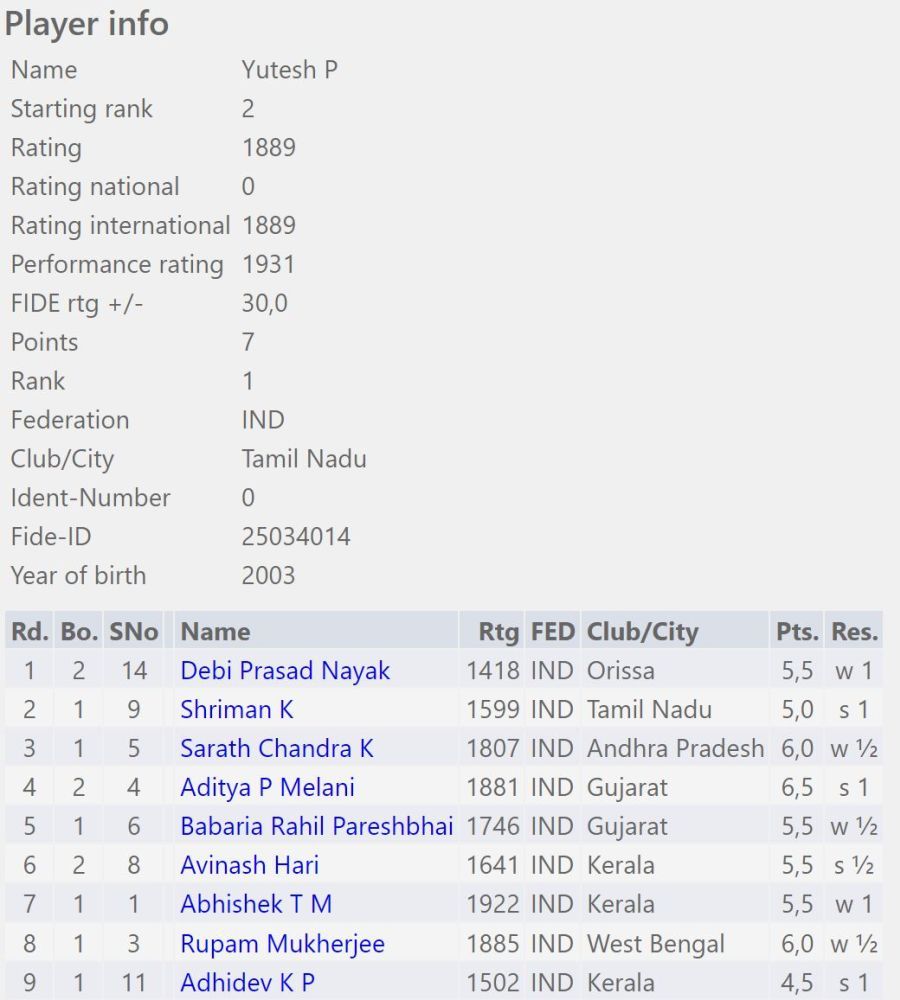 This is Yutesh P's first major triumph in a long time. After finishing 2nd in Tiruvallur district under-17 open just over a month, Tamil Nadu's Yutesh continued his momentum and delivered a champion's performance at National School under-17 open. 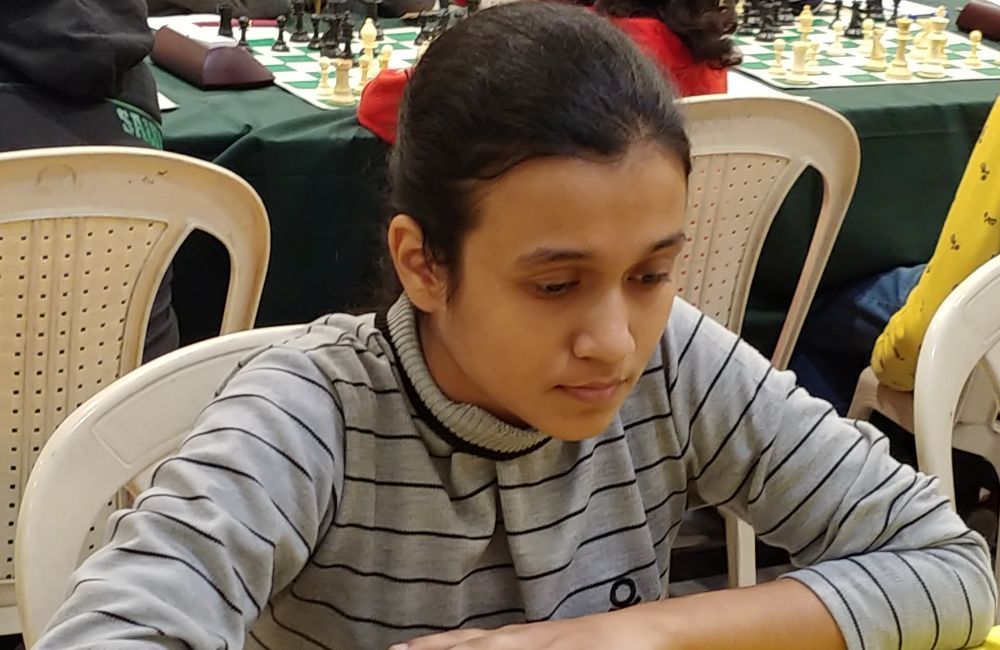 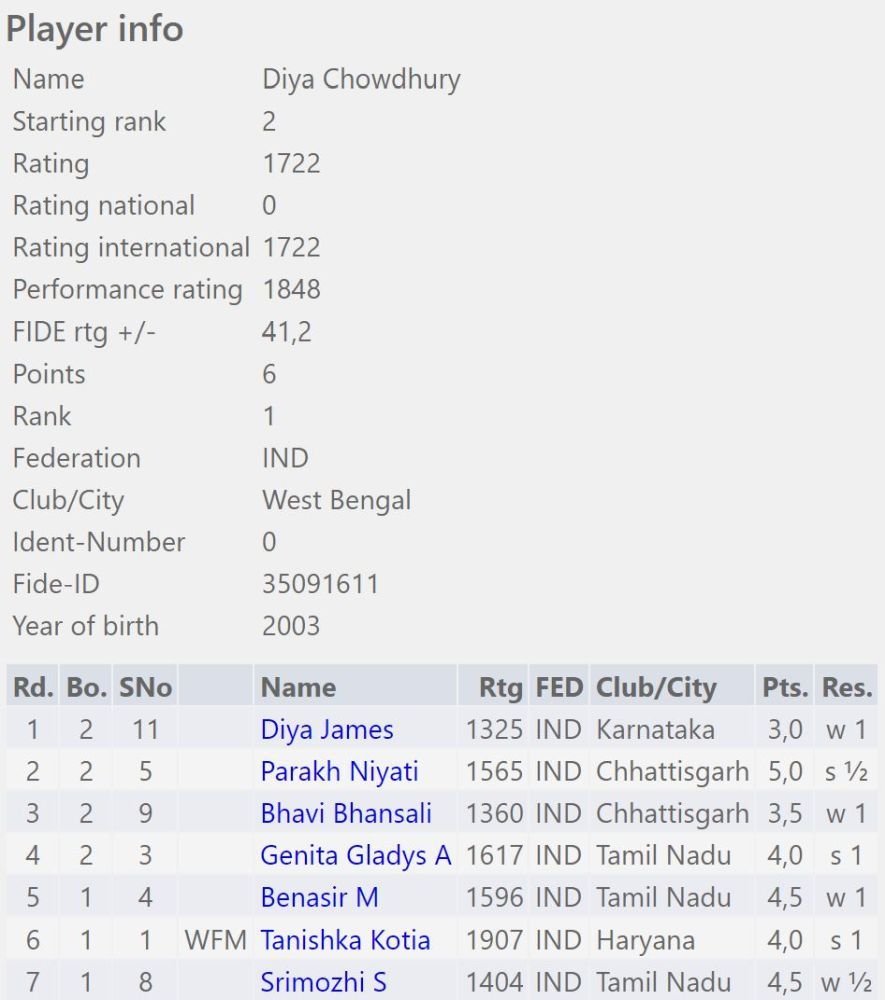 Diya Chowdhury of West Bengal is the current runner-up in State Junior. Despite starting out as the top seed, she went on to score 6.0/7 to become unbeaten champion in under-17 girls category. Monish P of Andhra Pradesh receives prize for the youngest player in the open category | Photo: Vasanth B H

All arbiters of the tournament | Photo: Vasanth B H 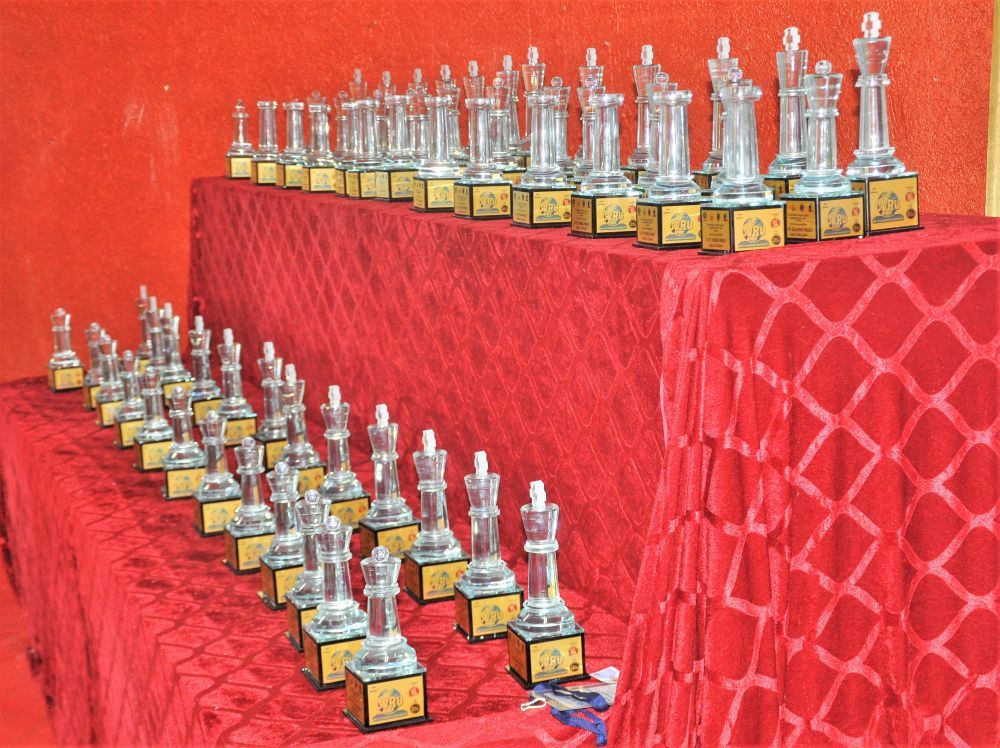 The beautiful trophies which were up for grabs | Photo: Vasanth B H Under-7 girls in action | Photo: Vasanth B H 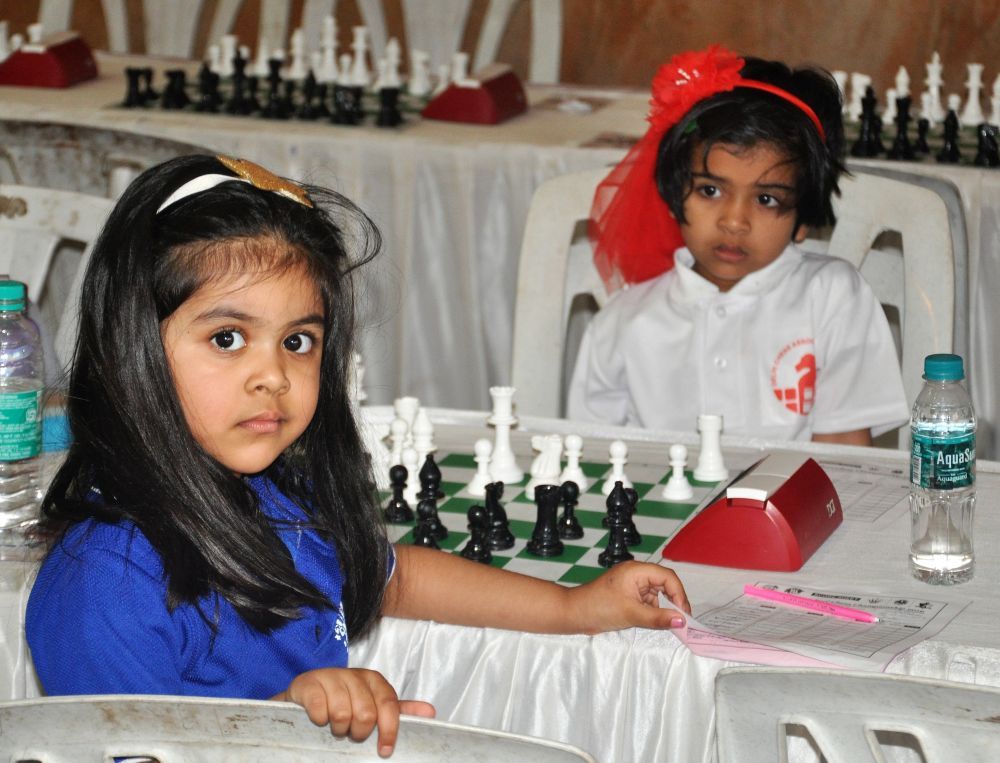 Under-7 girl after winning the game | Photo: Vasanth B H 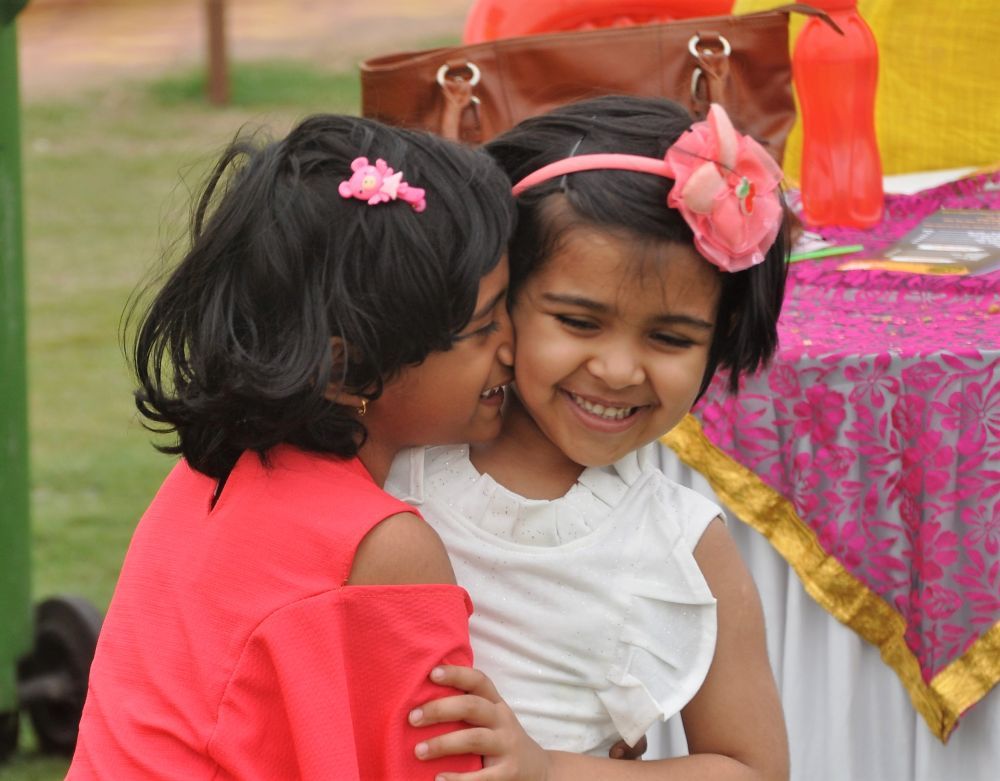 Light moments after winning a match | Photo: Vasanth B H Arbiter Vasanth B H interacting with the parents | Photo: Vasanth B H