Yesterday, famous Facebook vlogger, Nuseir Yassin aka Nas released an interesting video on Armenia's chess in schools program. For any chess lover, this was a pleasant surprise as finding chess in popular social media content is quite a rarity. Keeping with the spirit of his other videos, Nas shared an interesting story worth learning from. And guess what! Levon Aronian featured in that video along with the Armenian President. In this report, we share Nas' video, present a few quick facts about Armenia's Chess in Schools program and compare it with Indian scholastic chess.

The best way to build the future

Nas Daily, a vlog run by Nuseir Yassein  over various social media platforms like Facebook, YouTube, etc. is known for videos that tell short, inspiring tales of people Nuseir meets in his travels around the world. Anything new, inspiring, or worth learning is documented in a one minute long video for his viewers across various social media platforms. But why are we talking about Nas today? Well, it’s because of this.

Chess hardly finds enough space in mainstream media and, therefore, Nas doing a video about chess in Armenia was a pleasurable find for me on Facebook today. Coming to the learning part of the video, words from the narrative of the video ring aloud – “if we teach children discipline, patience, strategy and focus from a young age, we can create a world where everyone is a grandmaster”.

In the opinion of Armenian GM Smbat Lputian “bringing chess into schools is the best way to build the future.”

Of course, chess in schools isn’t a new idea. But for a country like India, where chess in schools exists in its nascent stages, Armenia can, perhaps, be an example to look up to. Currently, the Indian Chess in Schools program has only gained popularity among private schools while the need of time is for it to reach every student in every school. In Armenia’s case, over $1.5 million was spent to implement the program in the country. Today, every primary school in the country has chess as a part of its curriculum for children above the age of six.

But while taking Armenia for an example, one must also bear in mind that it is a small land-locked country between Asia and Europe with a population of less than 3 million. To achieve something similar in a country as large and diverse as India would require an effort of a much larger magnitude. And efforts are being made to get it implemented in the country. In one of his interviews with IM Sagar Shah, AICF secretary. Mr Bharat Singh Chauhan had shown keen interest in the program. It was also a part of his 15-point plan for Indian Chess.

One of the biggest problems that we face for implementing the Chess In Schools program is the lack of chess teachers. We, at ChessBase India think that Fritz and Chesster, where you learn chess by means of cartoons, could be an excellent way to spread chess in every school of our country. You do not need chess teachers for the same, you just need a teacher who will learn chess along with the students. To know more about Fritz and Chesster, check out this article. 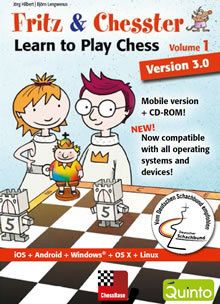 As aficionados, all we can hope is for these efforts to transpire into a success story very soon and that Chess in Schools program flourishes in a big way in India. I guess you've been reading for about a minute. See you tomorrow!