When someone asks which is highest prize money junior tournament in the world, people tend to think it must be held somewhere in USA, Europe or the middle-east. Turns out it's held in India, in the financial capital of the country - Mumbai. This year the IIFLW under-13 International is being held from the 29th of December to 7th of January 2018. The top seed is D. Gukesh (2362) who seems to be playing one tournament after another absolutely non stop. He will be facing stiff competition from the likes of Pranav, Leon, Anuj, Divya and the others. In this report we bring to you the entire action from rounds one and two along with some excellent pictures by Amruta Mokal.

The EKA by IIFLIM 3rd Mumbai International Chess tournament 2017-18 is back! It's one of the most awaited events of the year because it has two tournaments running simultaneously. In the morning you have the under-13 kids battling it out for the first prize of Rs.1,50,000 (Yes, it's the highest prize money under-13 event in the world) and in the evening you have the open event where some of the best grandmasters all around the world are seen in action. This report deals with round one and two of under-13 Mumbai International.

The under-13 event is something that I love. Mainly because there are a lot of future stars that you can see in action. Also you see some very raw expressions from the players which you do not see in the open section. This is a delight for our ace photographer Amruta Mokal. "I think the under-13 kids give some very nice expressions because they are not used to professional photographers shooting them. While in the open section almost all the players are used to it and give a very polished look." 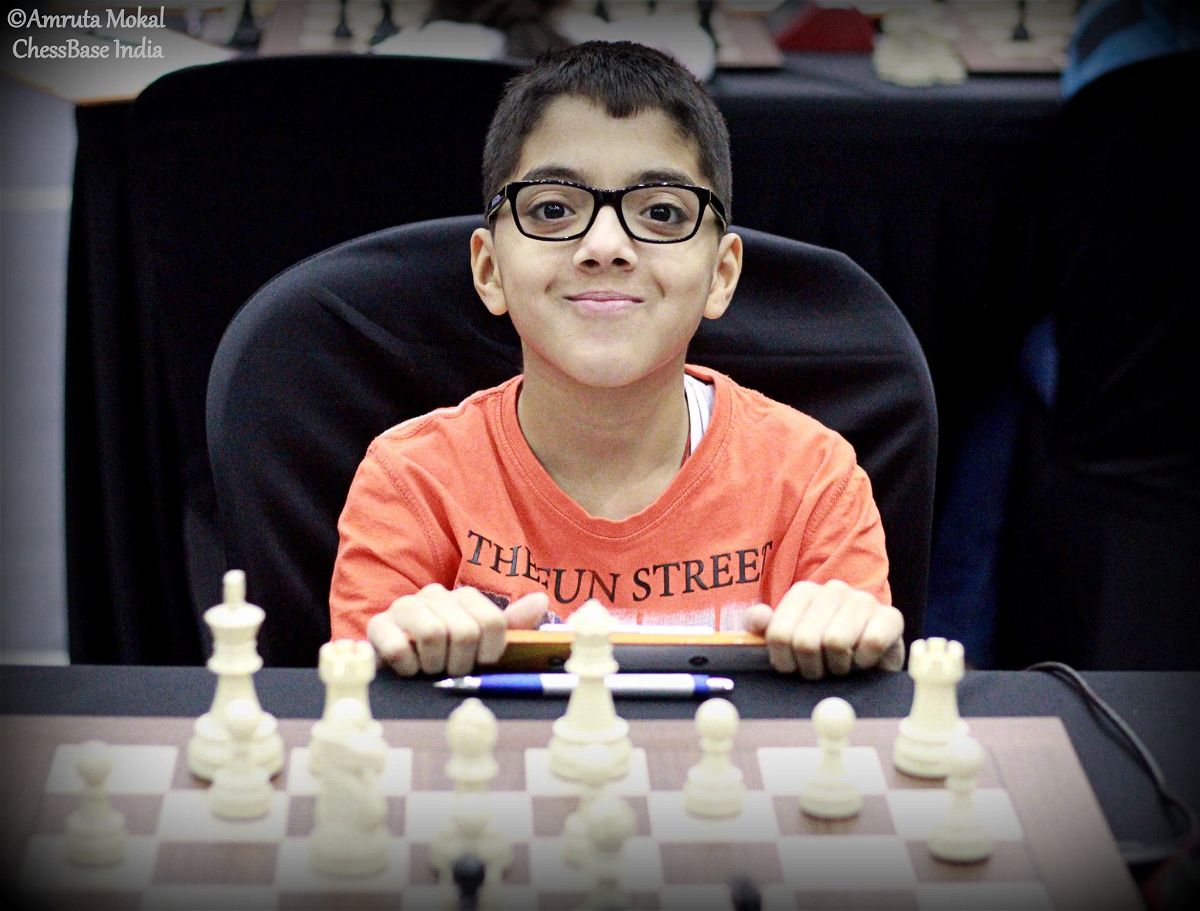 A photographer feels welcome when such expressions are given! | Photo: Amruta Mokal 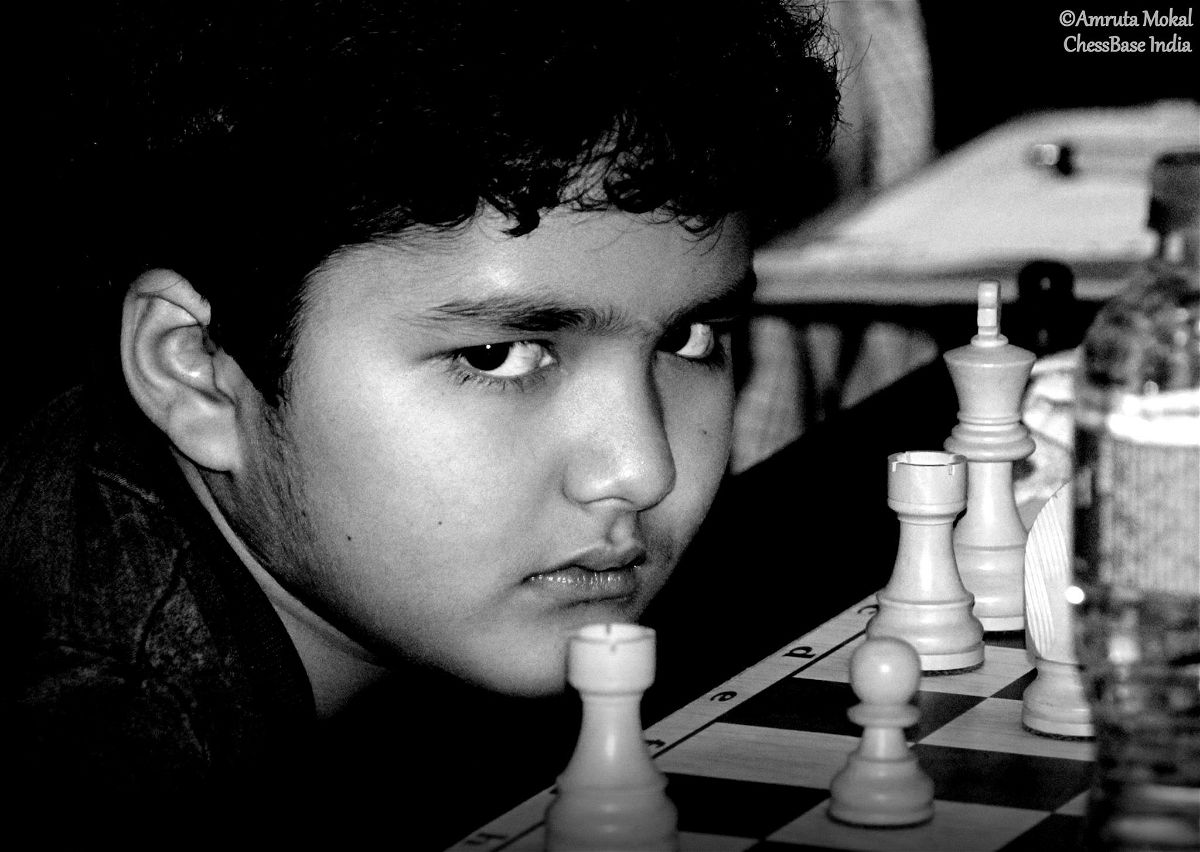 Not so welcome any more! | Photo: Amruta Mokal 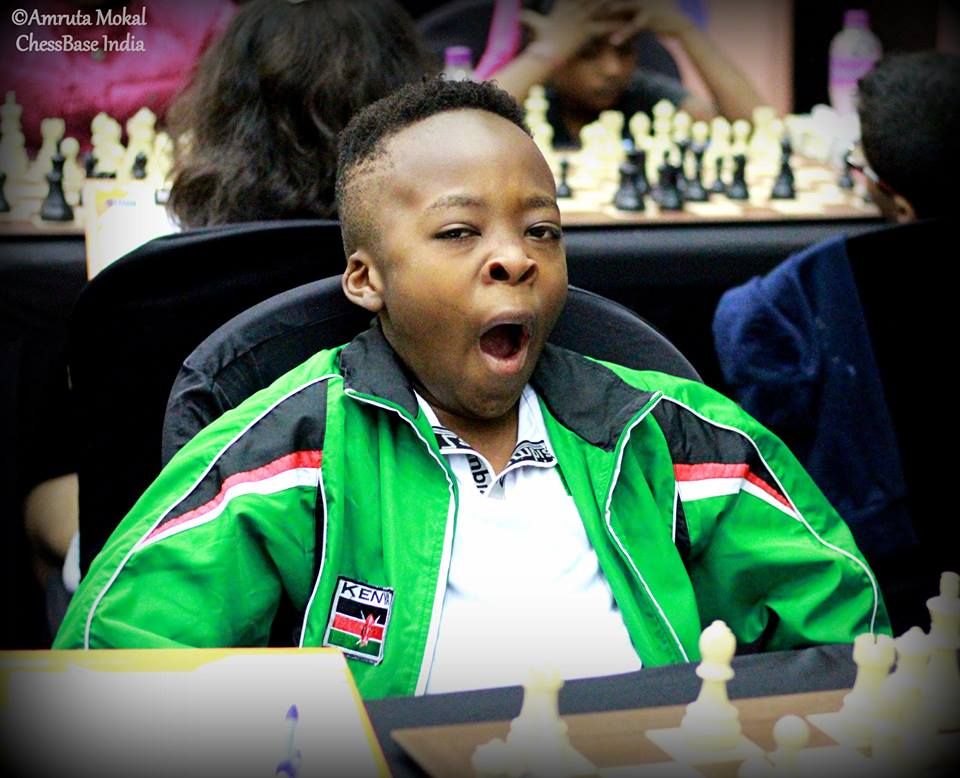 For this boy from Kenya the early morning round at 9.30 a.m. is a little too early! | Photo: Amruta Mokal 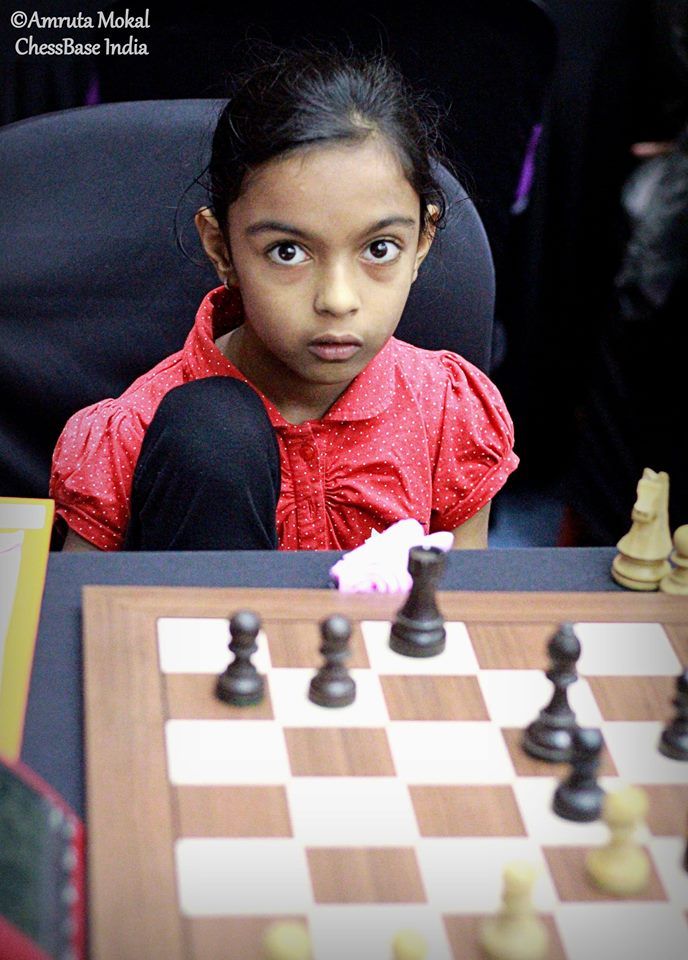 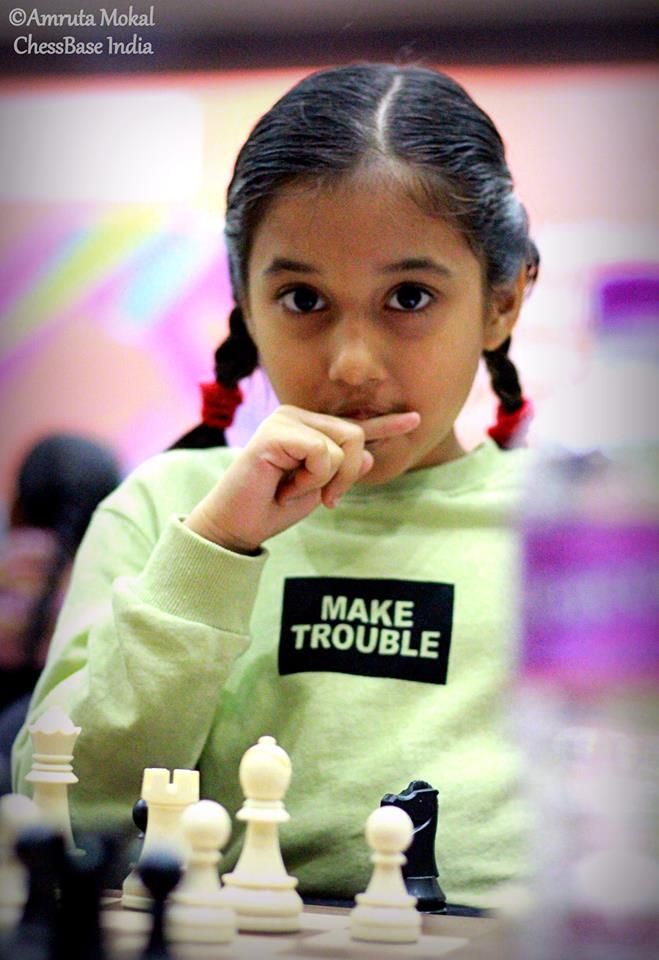 Is that a warning?! | Photo: Amruta Mokal 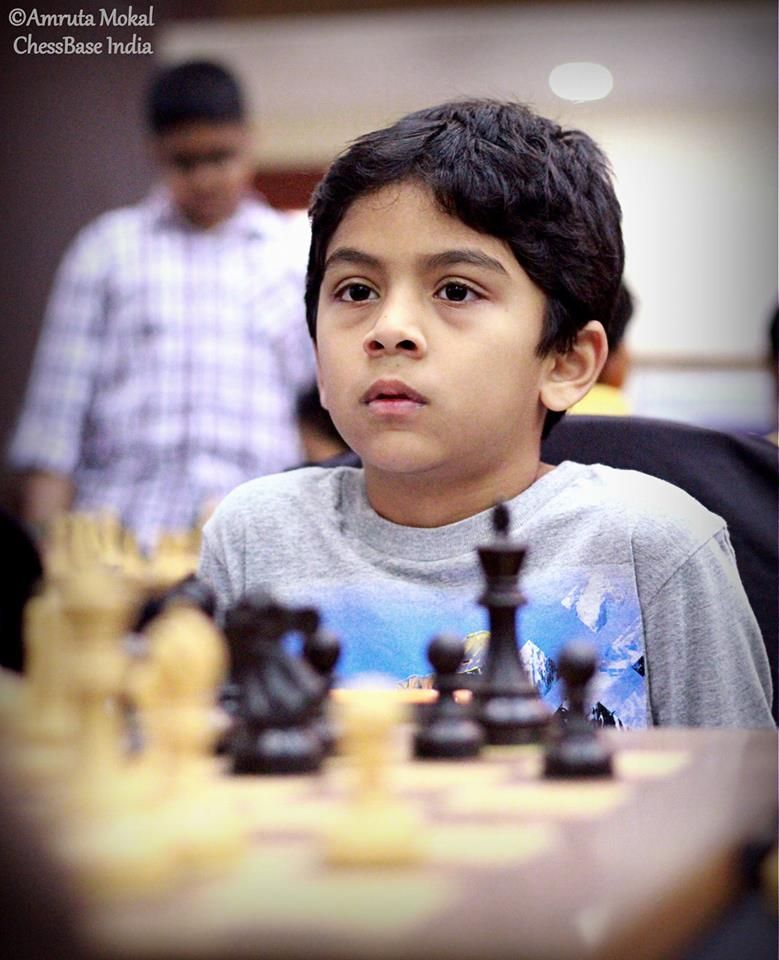 Wow! That was an amazing move! | Photo: Amruta Mokal 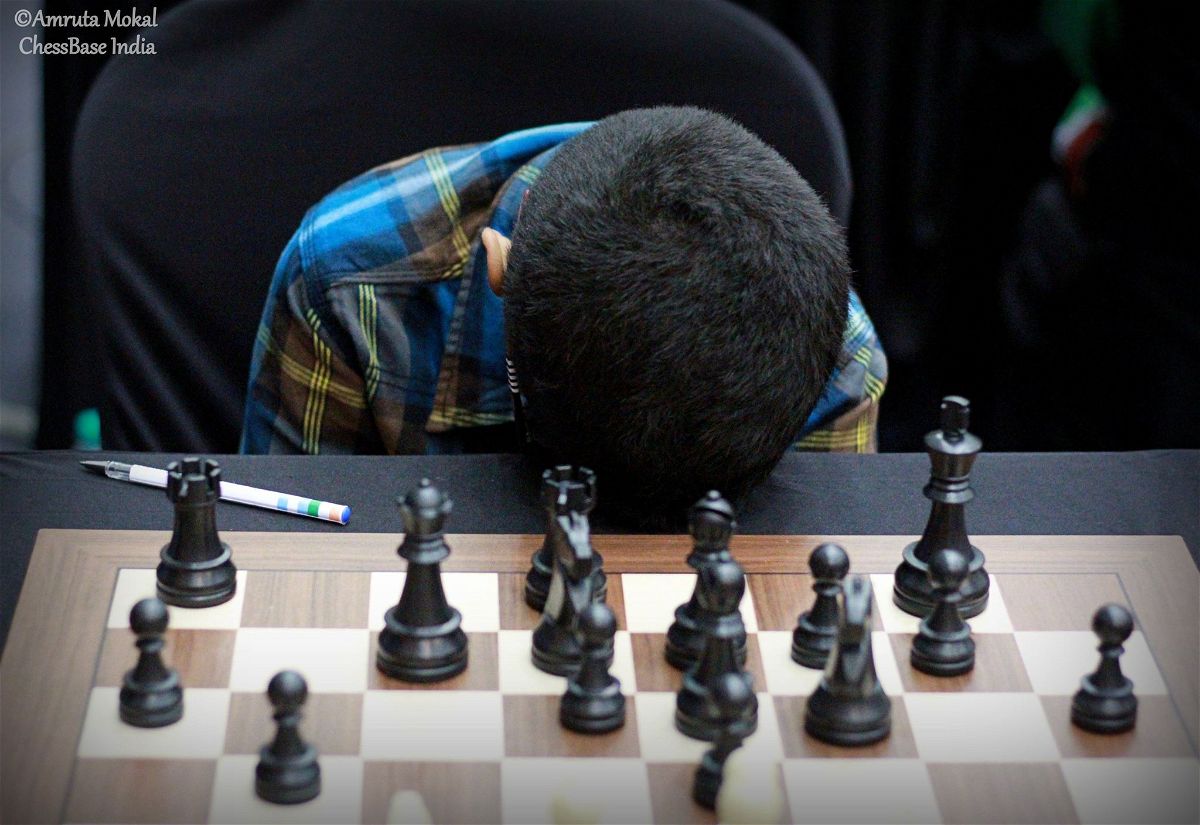 Did he just doze off or is he in despair?! Judging from the position it seems like the former! | Photo: Amruta Mokal 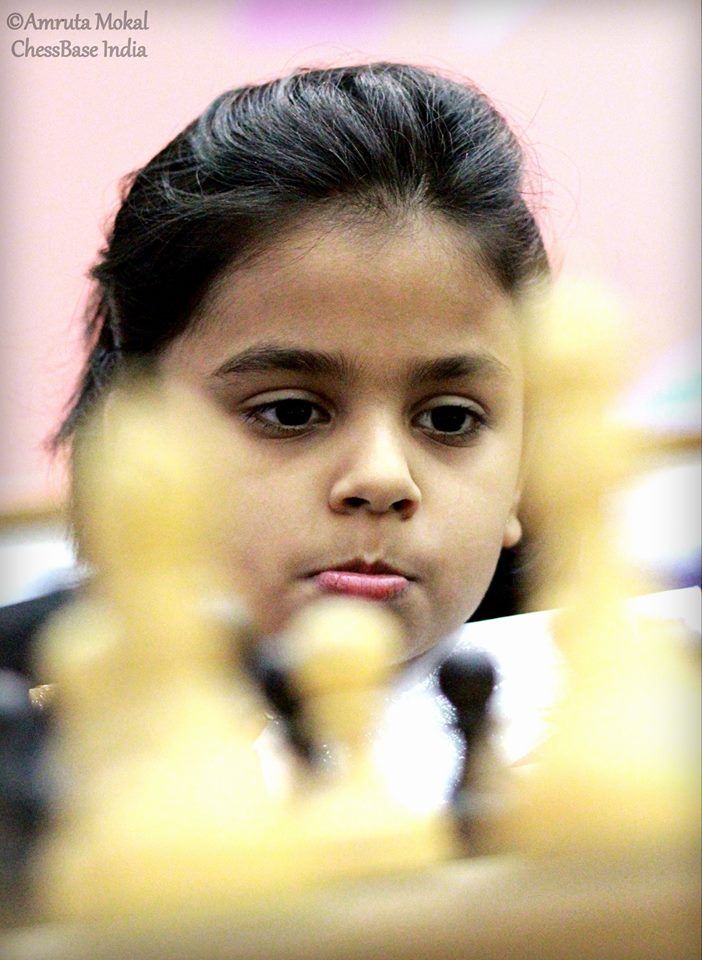 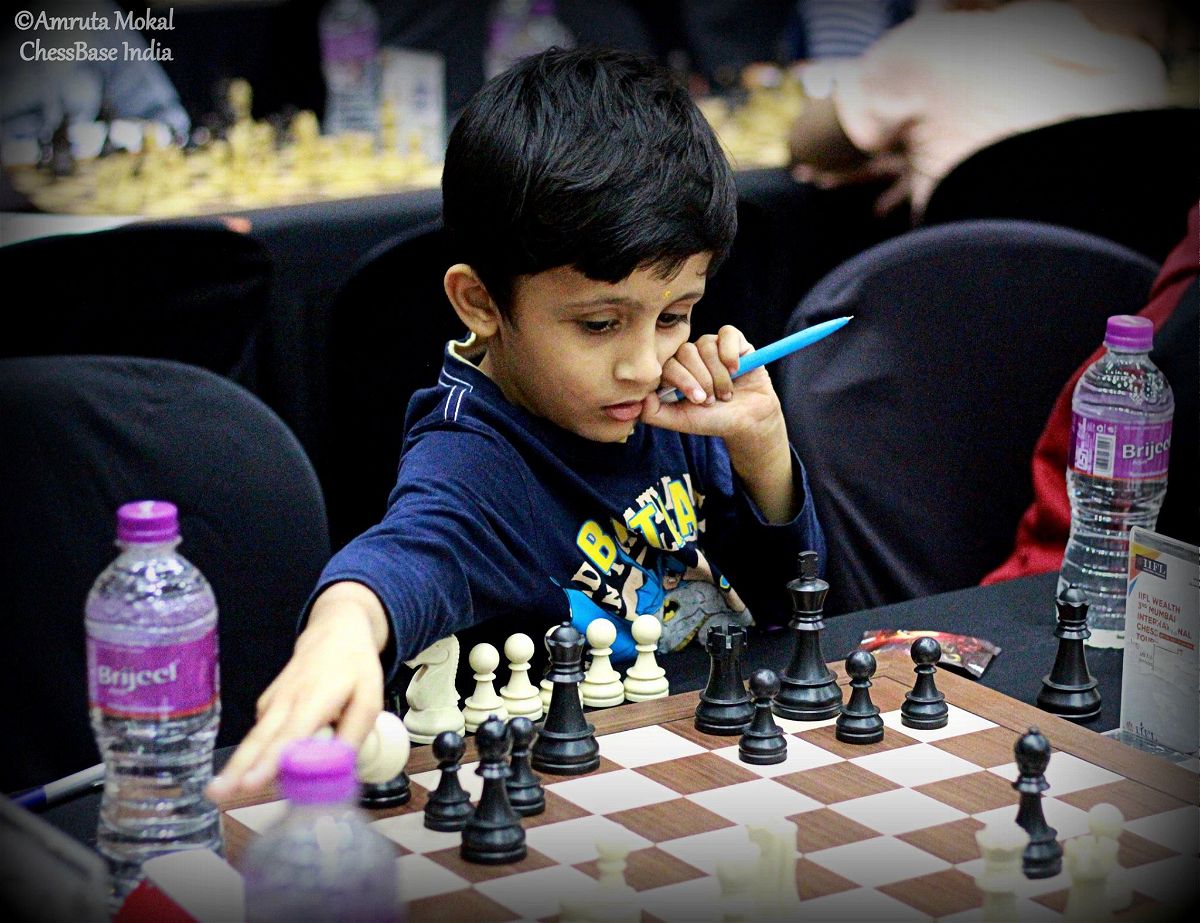 Ah! Pressing the clock is such a pain!  | Photo: Amruta Mokal 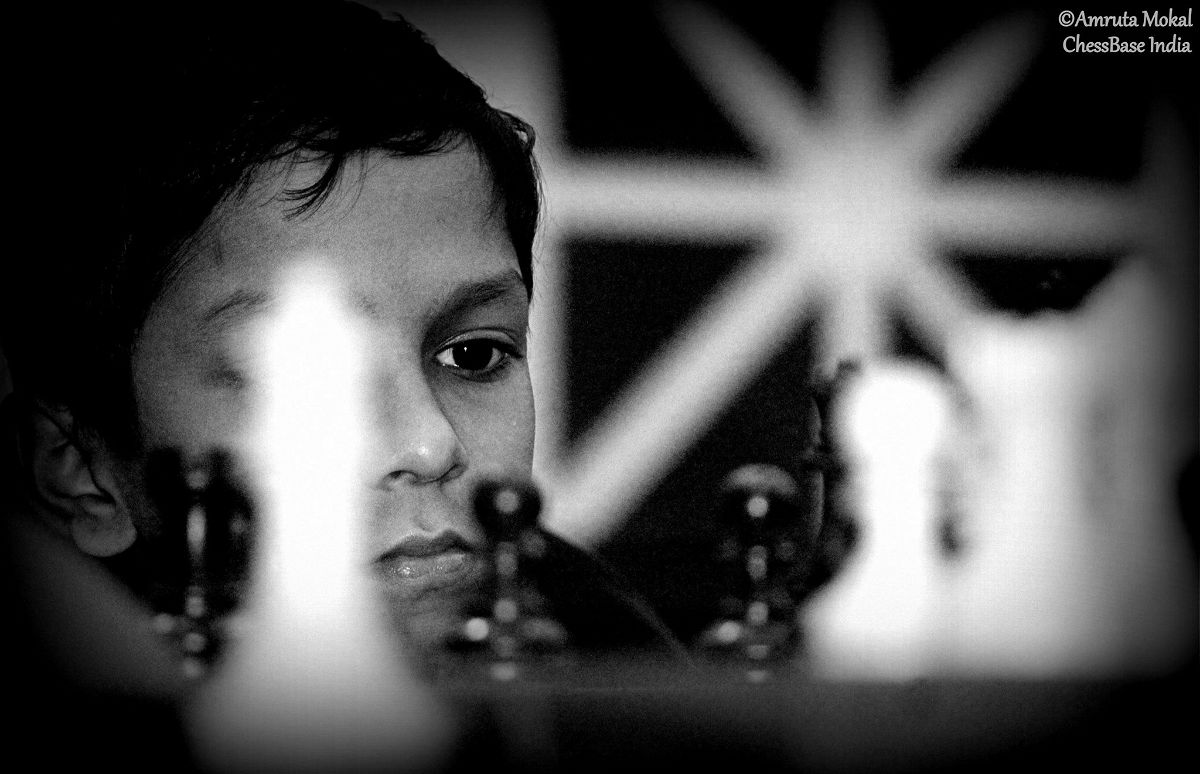 The playing hall at the Mount Litera school is one of the best that you will see. The sheer size of the hall gives you a feeling of grandeur. And with 104 DGT boards, it is a record of number of live games being shown in an Indian event. In fact the quantum was so high that the server of the official website crashed for a while. The organizers were quick to fix the issue. Hats off to Anandhbabu and Sandesh Nagarnaik for pulling off this ambitious project to broadcast 104 boards live. 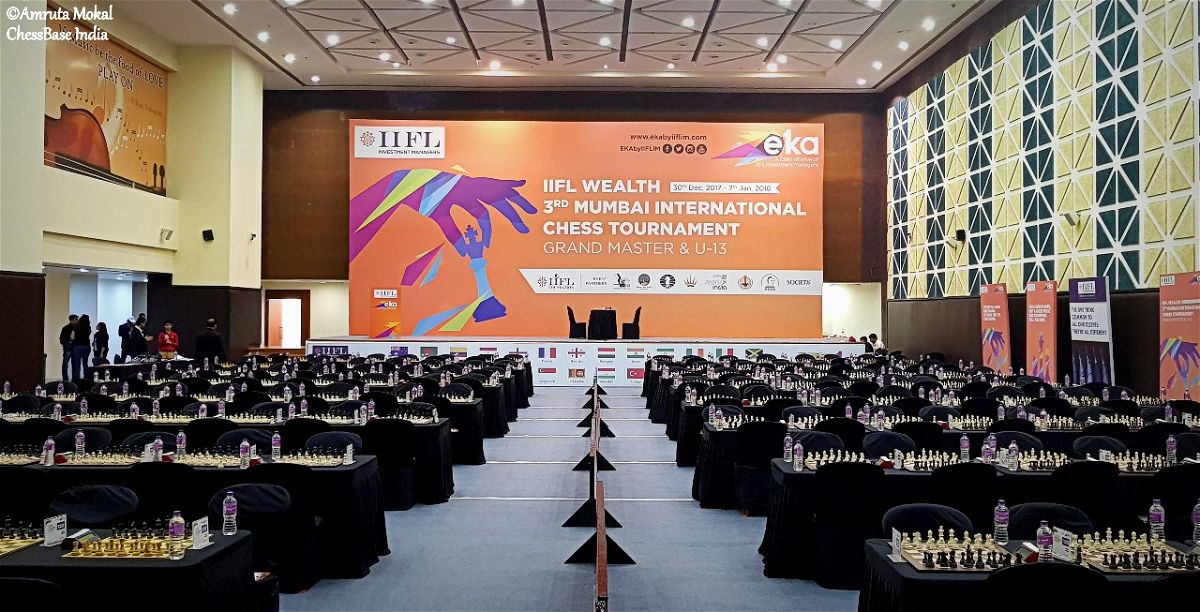 This year the tournament is organized by EKA which is the Corporate Social Responsibility initiative taken by IIFLIM (India Infoline of Investment Managers). EKA currently promotes three sports in India - chess, tennis and golf. The word literally translates to 'one' which is the vision of IIFLIM. All sports should be included under the umbrella of EKA. Chess was the first sport that IIFLW decided to support and they are extremely happy with the way things have turned out. Co-founder and Executive Director of IIFLW Yatin Shah was at the venue and we decided to ask him why a corporate giant like IIFLW supports chess in such a big way. 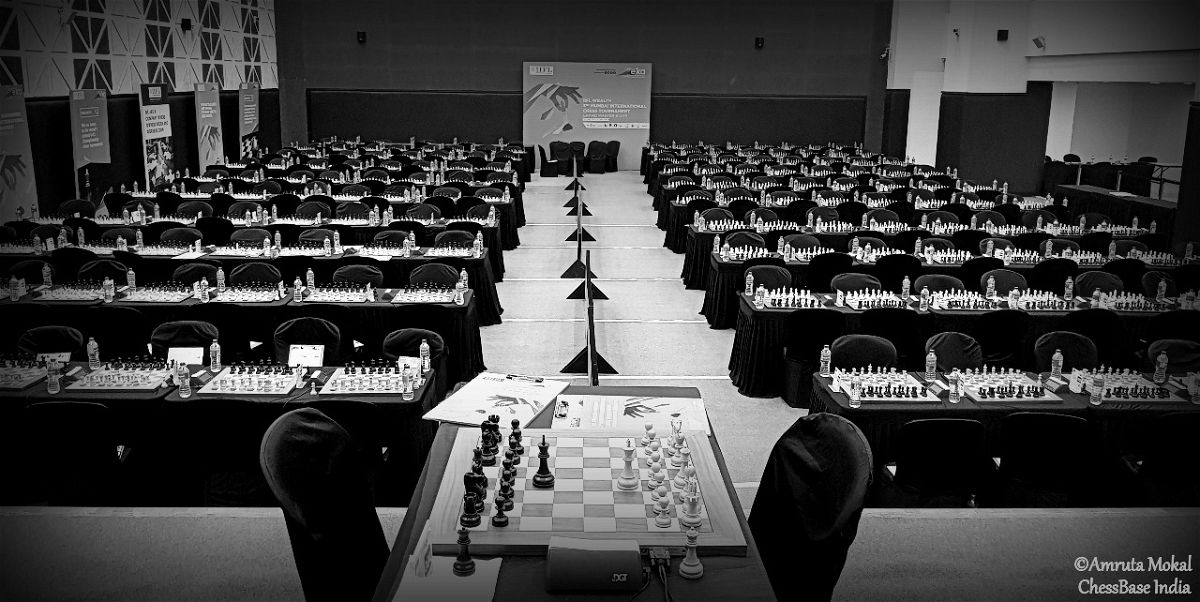 Who wouldn't like to play in this playing hall? | Photo: Amruta Mokal 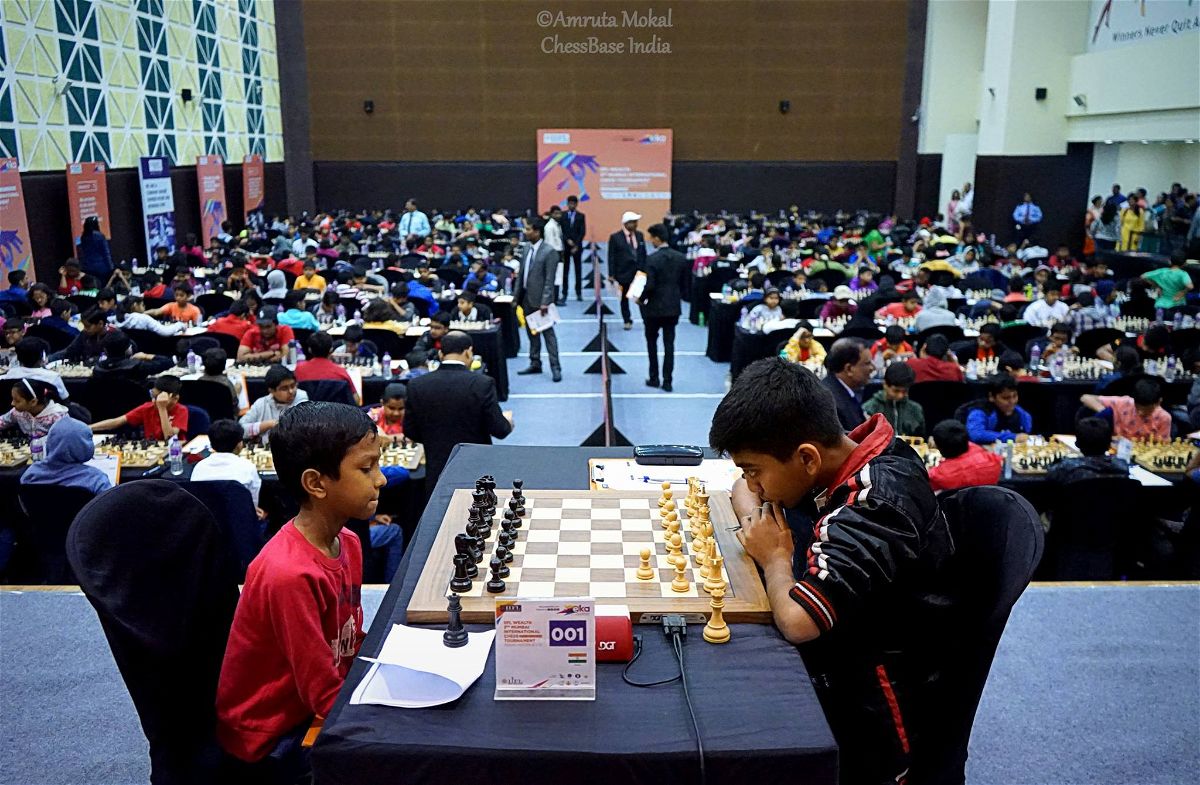 Top seed of the event (Gukesh) plays 1.b3 to kick off the event | Photo: Amruta Mokal

One thing which I find odd is the fact that only one board is placed on the big stage. Although aesthetically this might look quite pleasing, for practical reasons I would have been happy if there were four boards on top. First of all the first row (i.e boards 2-15 and beyond) would not be as crowded as they are right now and secondly sometimes games on second and third board are just as important as the top board and can very well decide the winner of the tournament. 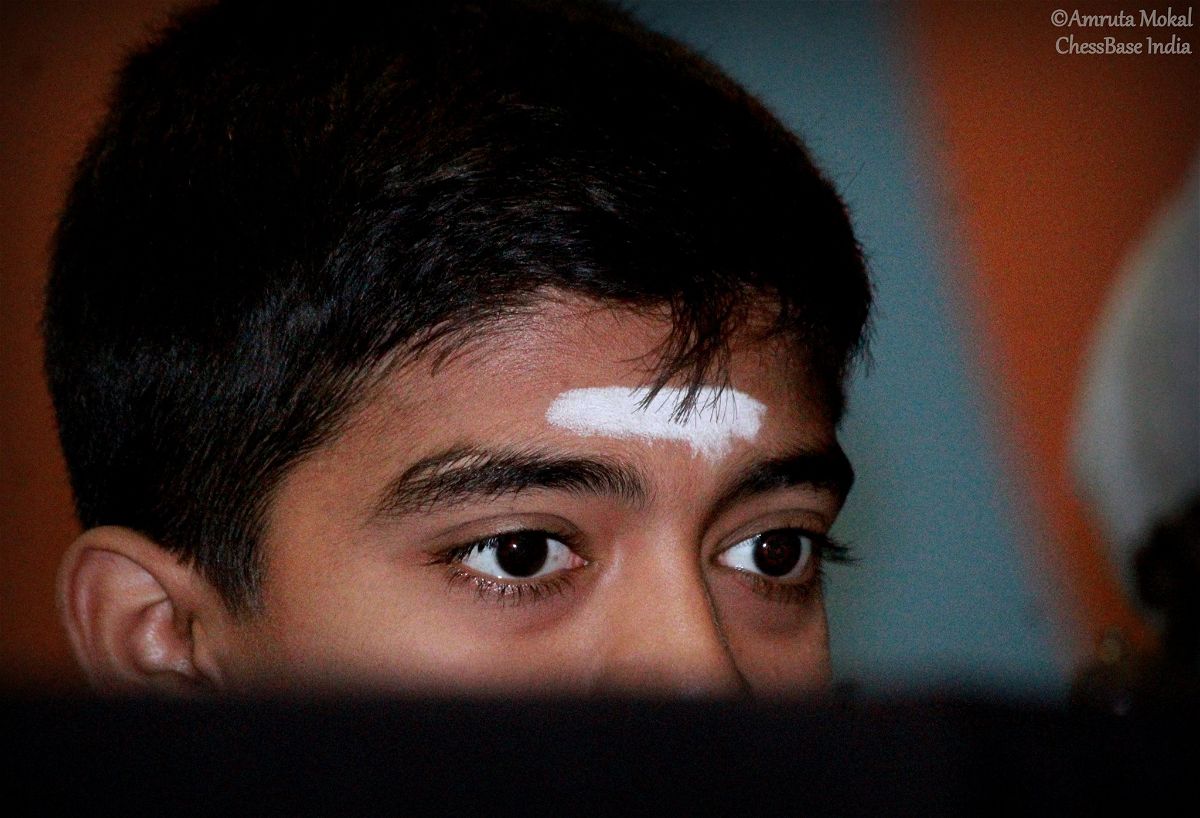 The favourite of this tournament D. Gukesh is playing on the top board and has begun with a 2.0/2 victory | Photo: Amruta Mokal 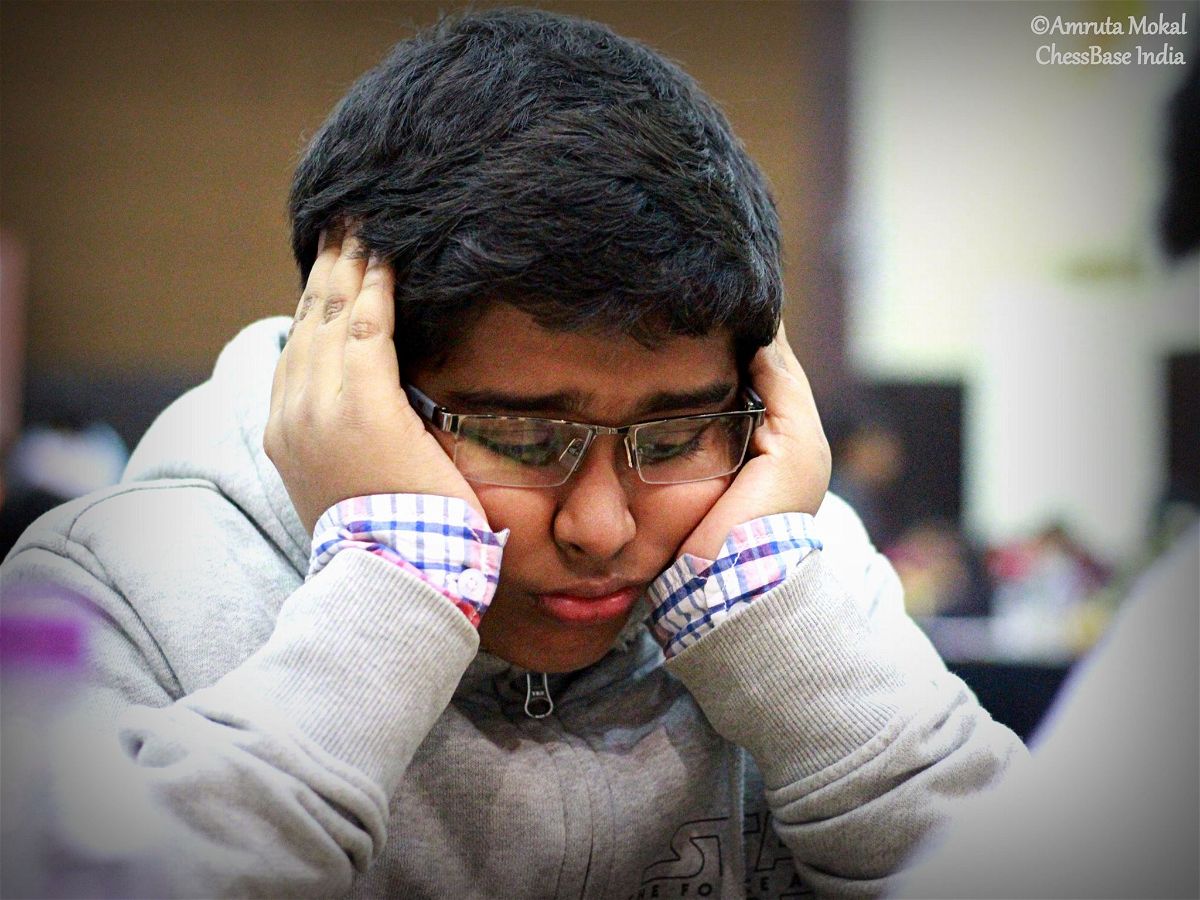 Tarun Kanyamarala who represents Ireland won the game of the day award in the first round | Photo: Amruta Mokal

Although the first round pairings were pretty skewed, Tarun played a very logical game of chess to win the game of the day prize. We will tell you the exact reason for the selection of his game in a bit, but first try your hand at solving this position: 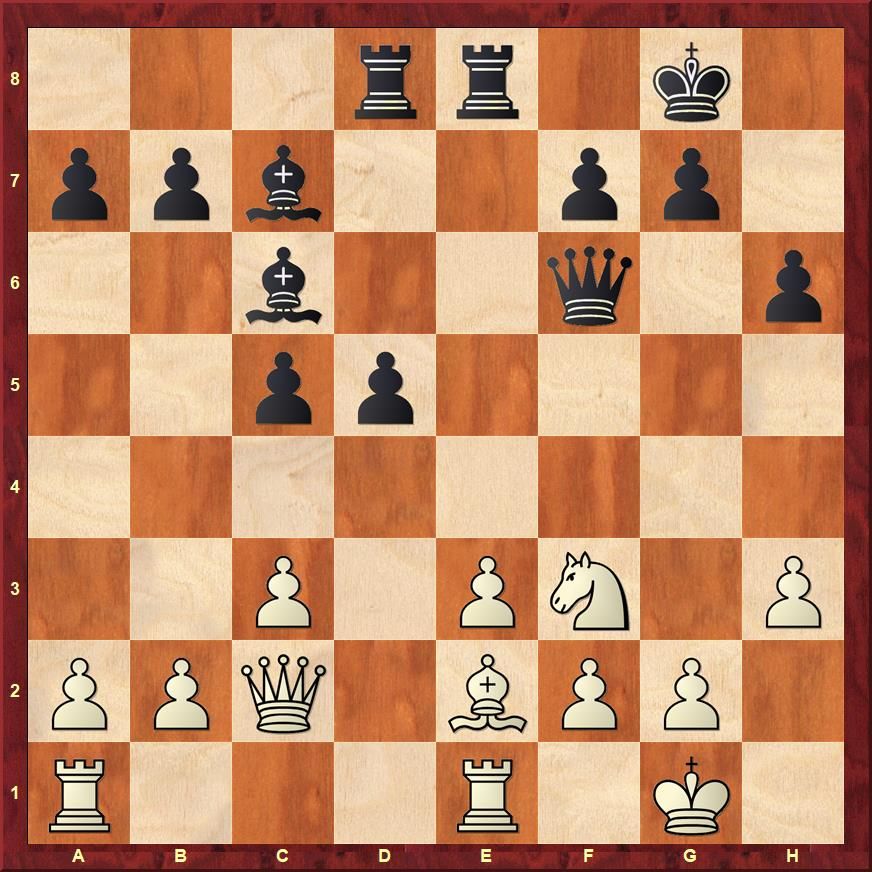 Tarun, who is black in this position, has maximized the placement of his pieces. How should Black continue?

Tarun played the move ....h5 here. His idea was to continue with g6, Kg7 followed by Rh8 and then g5-g4. Finding such plans which create something in a region of the board where nothing exists is not easy. Due credit must be given to the young boy. Writing your scoresheet with this pen might not be the best idea during time pressure! | Photo: Amruta Mokal 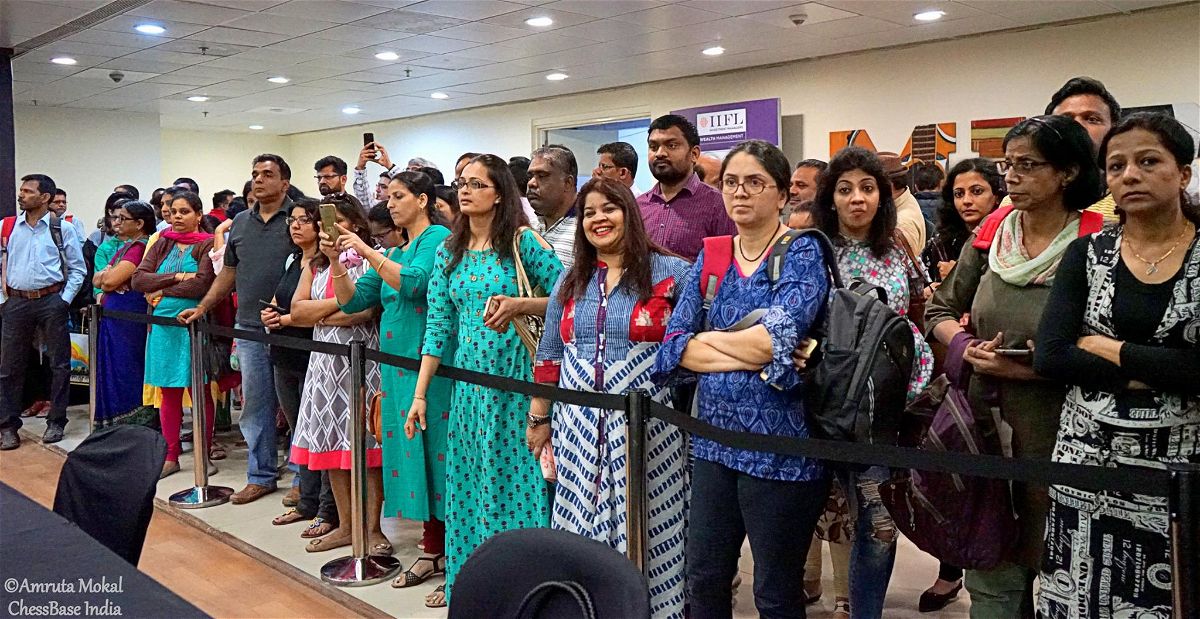 Parents are allowed to enter the playing hall only during the start of the round. Once the games begin they have to wait in the area outside the hall. | Photo: Amruta Mokal

The round has begun! Do you notice a famous chess player (International Master) who is here as a chess parent? | Photo: Amruta Mokal 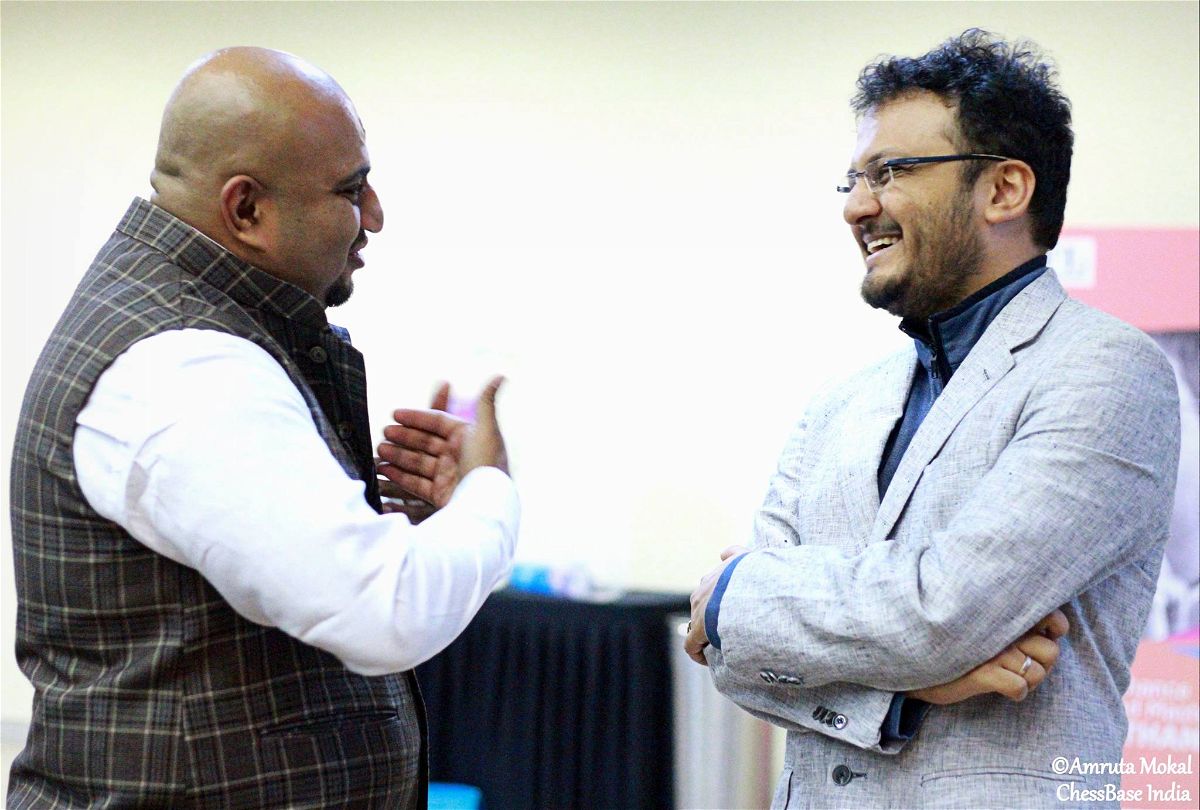 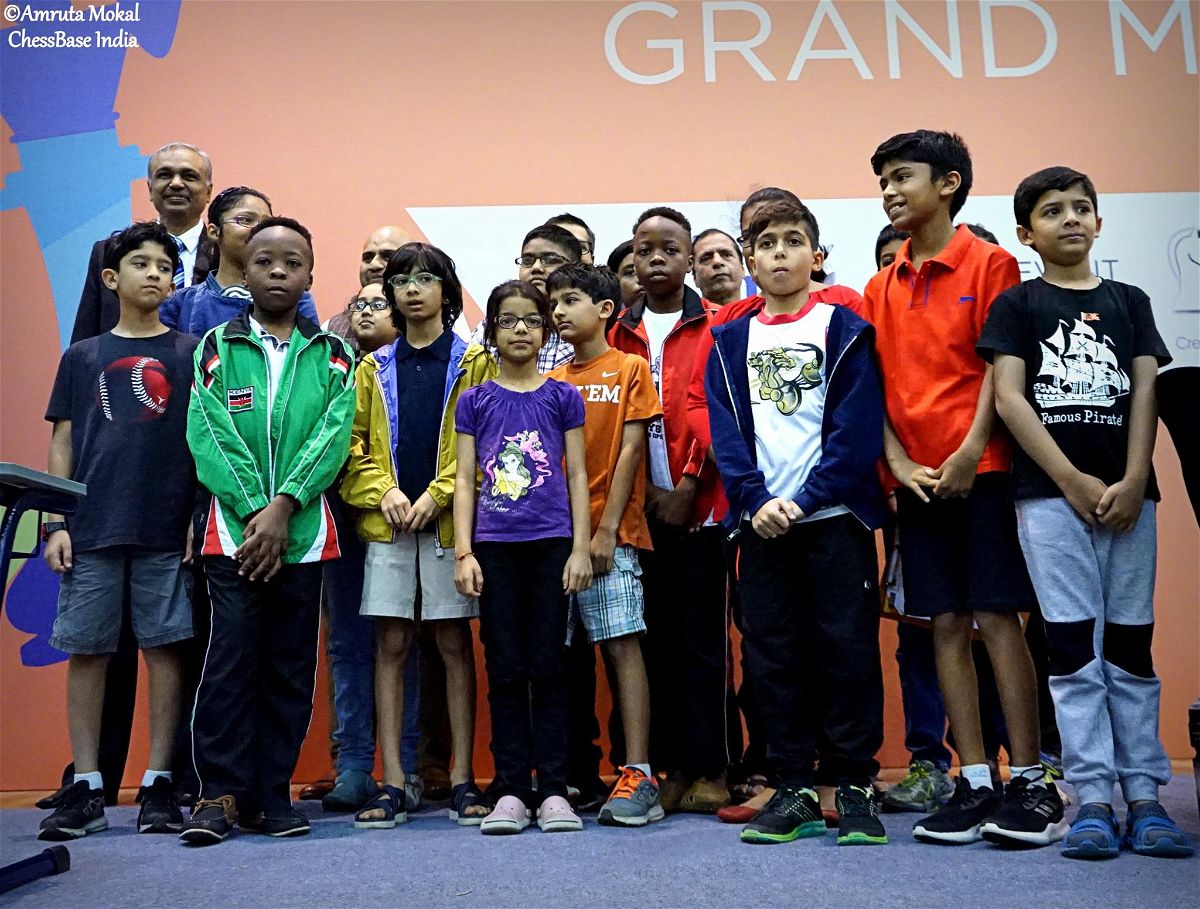 International players from nine countries are playing at the under-13 event | Photo: Amruta Mokal 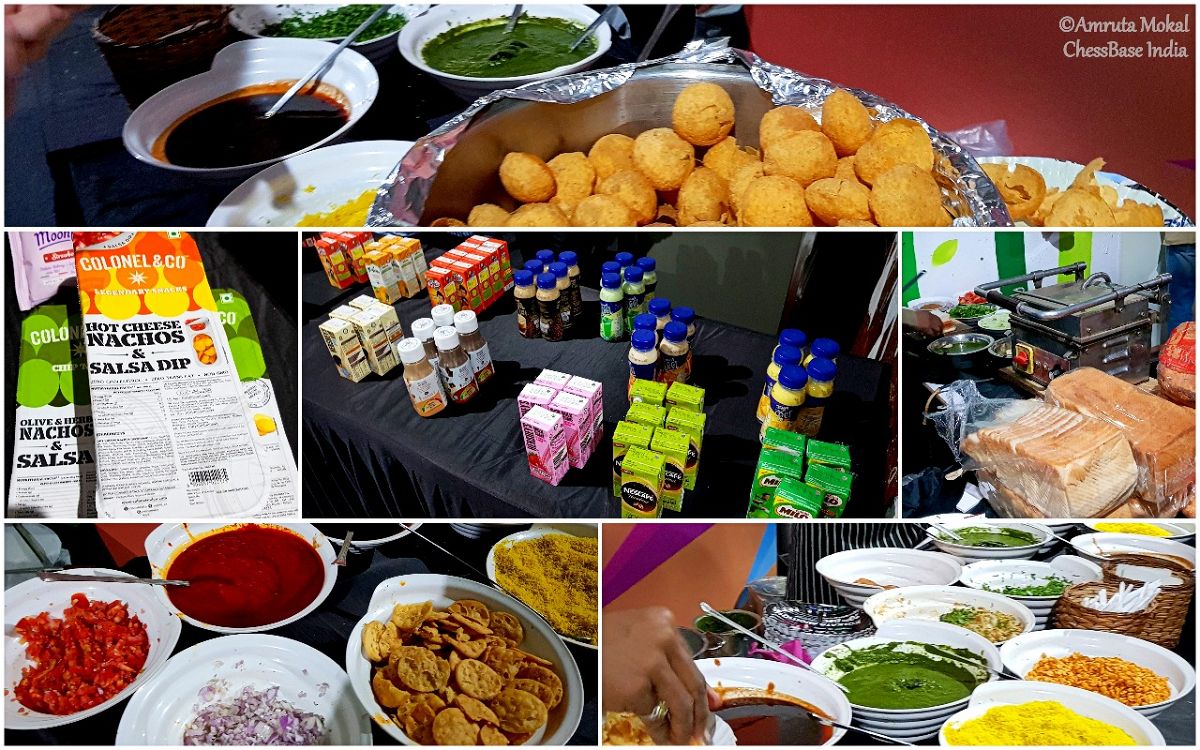 There is a huge variety of food for players at affordable prices served right inside the premises right from pani puri to sandwich, to milk and nachos! | Photo: Amruta Mokal

Watch all the games live