Meenakshi's advice to all unmarried girls

Meenakshi Subbaraman was one of India's top women players. She became a WGM in 2004. The WGM from Chennai had not played active chess for quite some time but decided to make a comeback by preparing hard for the National Premier. With a 15-month-old-son, a family to take care of and a job in Air India, things were not going to be easy. But Meenakshi proved that she was capable of achieving was she dreamt by very nearly winning the title. By losing the last two rounds she was relegated to the fifth spot. In the post-tournament interview, Meenakshi had great pearls of wisdom to share with the chess community, especially young girls. Nongsha Angom sends us the transcript.

I love the ChessBase India Youtube Channel. I think it has great material for players of all strengths. Whether you are an amateur or a grandmaster, there is something in there for everyone. Recently I was going through the videos and found a very interesting one by Meenakshi Subbaraman. The WGM from Chennai was very close to becoming the National Champion at the National Premier 2017 in Surat just a month ago. In the end, she lost her last two rounds and had to settle for the fifth spot. In her interview with IM Sagar Shah after the tournament, there were a lot of key points that I thought were worthy of being shared. Hence, I transcribed the entire interview: 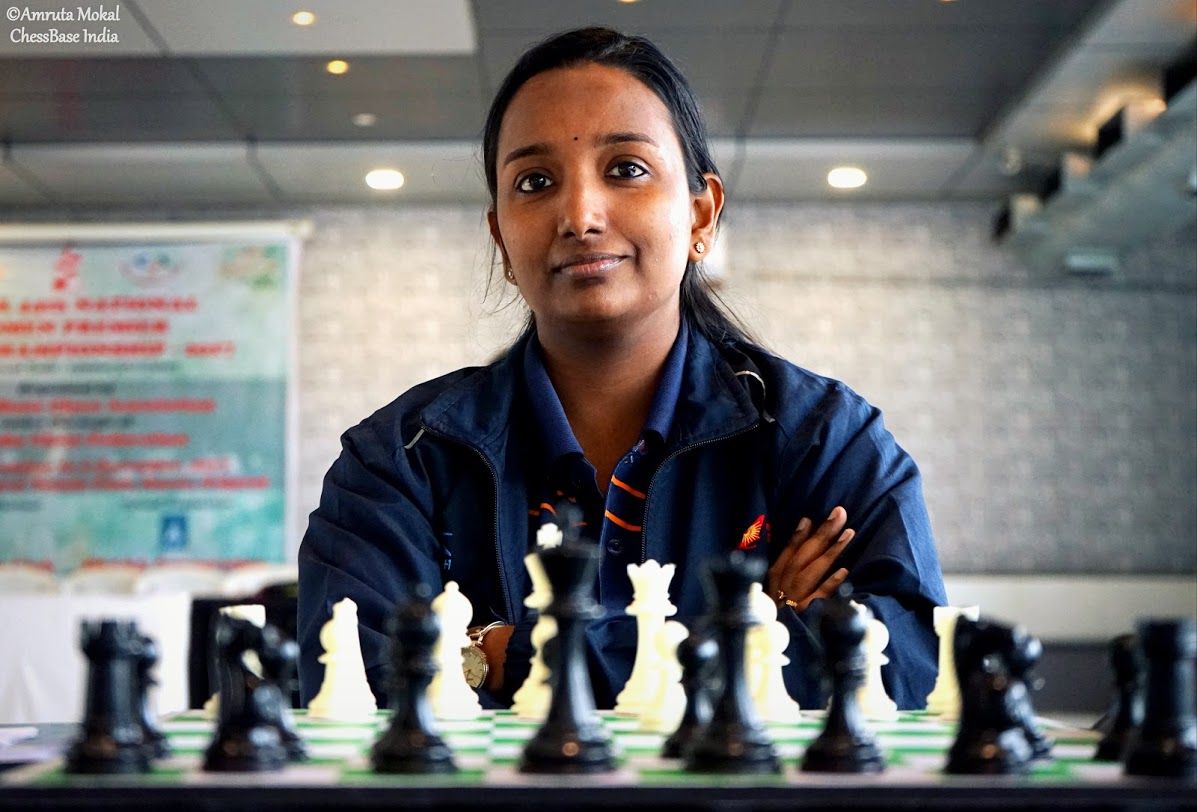 One of the most experienced and accomplished woman players in Indian chess - WGM Meenakshi Subbaraman | Photo: Amruta Mokal

Sagar Shah (SS): Meenakshi, you were so close yet so far, what exactly went wrong in your last two games?

Meenakshi Subbaraman (MS): I was leading by half a point until the 9th round but somehow failed, probably I should have won this tournament because I was facing lower rated opponents in the last two rounds and both Kiran (Manisha Mohanty) and Srishti (Pandey) were in really bad form. But there was one psychological factor going back in my mind which was my bad score against Kiran and I was also very tensed because I had missed the Nationals back in 2010 with much better chances. (Meenakshi finished 2nd in 2010 behind Harika). I was playing black against Kiran and I wanted to go for a safer option so I opted for the Petroff Defense and the position was equal. 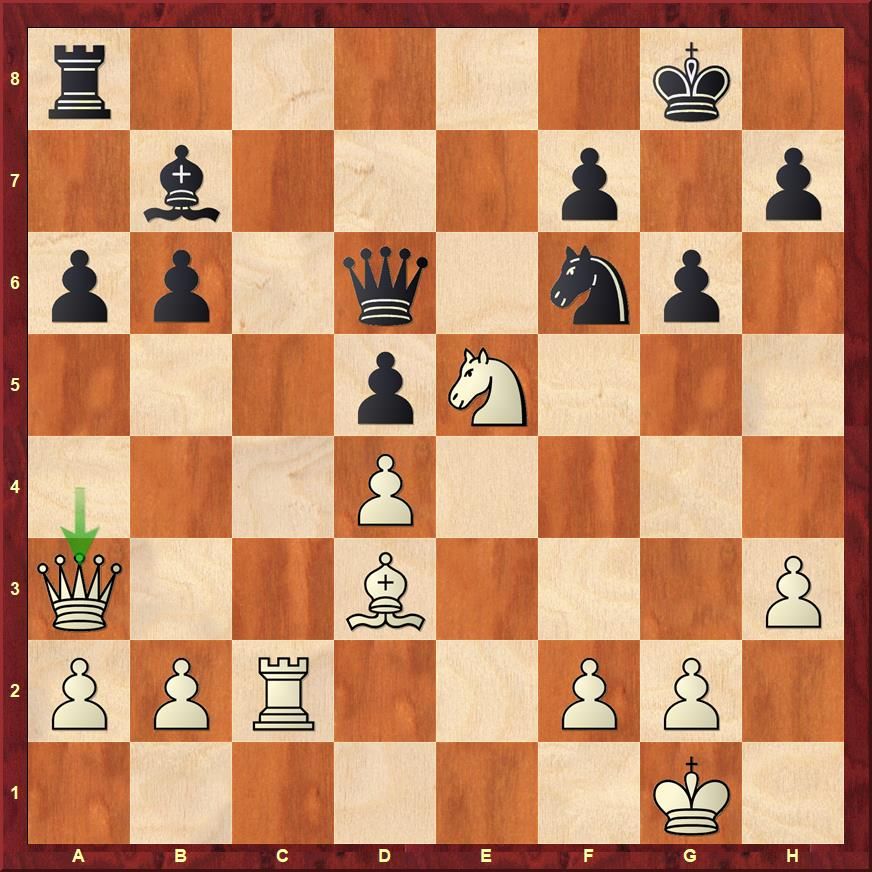 On Qa3 the right move was of course ..Qd8. I know I could have held that position but then I exchanged and something went wrong, it was like my mind got stuck and I ended up taking a lot of time and played really bad in time pressure, I was not able to give my best fight and that is one thing I am really upset about. I played quite good in the opening and middlegame but ultimately I just lost. But Nandhidhaa lost her game which gave me the chance to win the title by winning the last round. 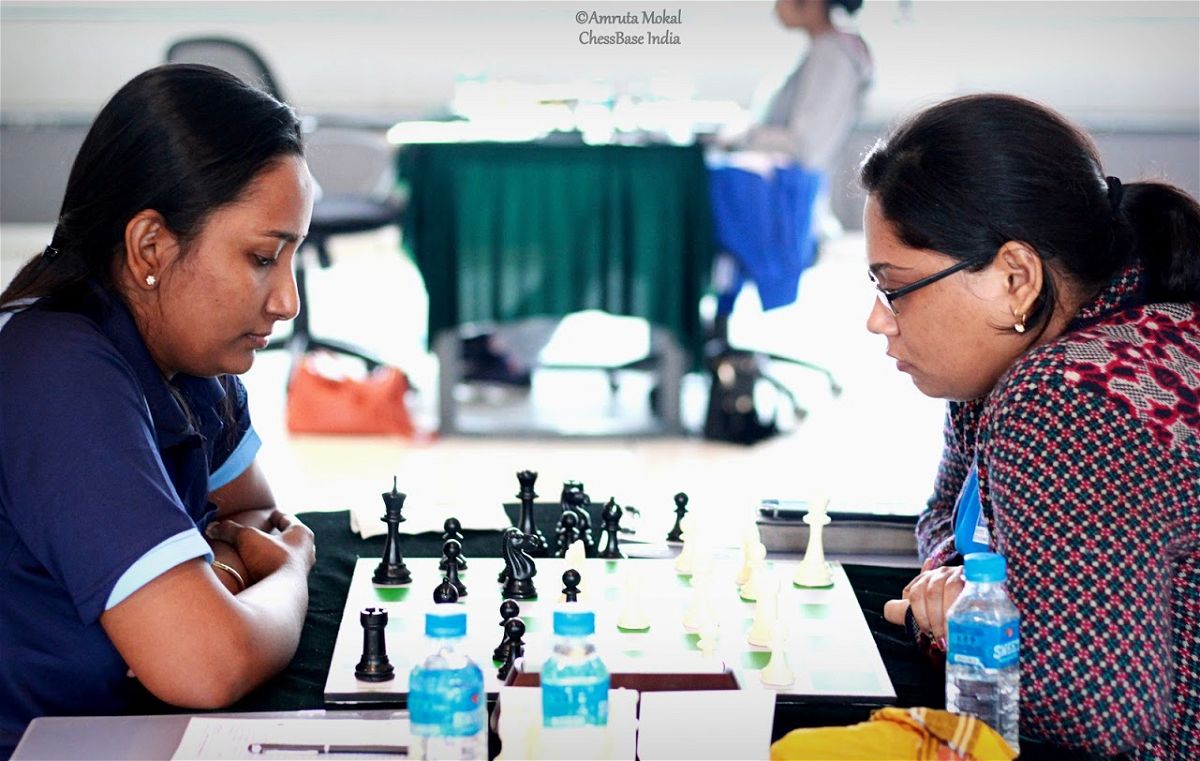 I faced Sristhi Pandey. She is 1800+ and I was playing white, I really prepared a lot you know and I played the Anti Grunfeld b4 variation and I got a comfortable position in the opening and middle but then I made hxg6 error: 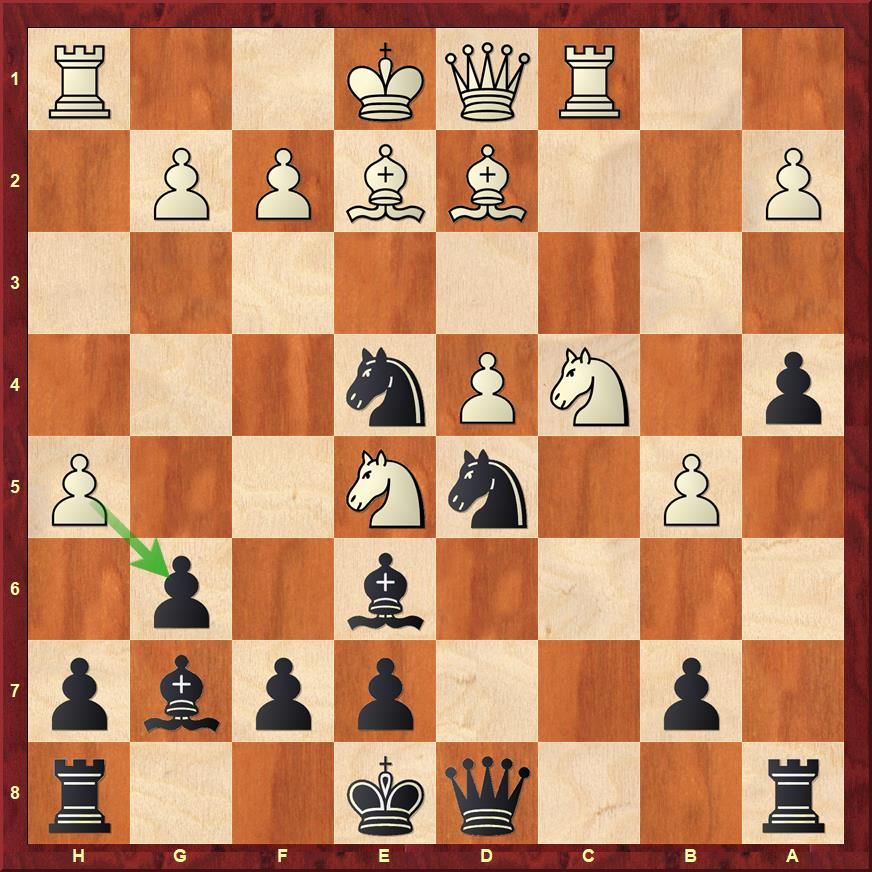 I had the intention to go for a kingside attack with initiative but I just exchanged hxg6 and suddenly there was no attack and by that time I got a bit worried because I knew that I had to do something now. It was very difficult because it was the 11th round and my 15 months old son was here. He didn’t sleep last night, kept on crying until 4:30 a.m. Even so, I used all my energy and played, but something didn’t click. I think Srishti gave me a chance, I should have taken Bxf7 with an equal position and a slight edge for me, I think I could have managed it and if not a win at least a draw would have helped me finish second. I just lost everything.

SS: You told about your 15 months old son. Usually when a mother has children that young they are taking care of them full time. You not only do that but also go to your job and you also prepared for the National Premier! How do you manage so much?

MS: By the start of the year 2017 in March I started taking the Nationals seriously, not the Women's B but the Women's A. I was lucky to get selected from the Women Challengers and from that time onwards it was on the back of my mind. 24 hours a day I was just thinking about the National Premier because I had missed a chance in 2010. You know, I really wanted to win the title. It was looking crazy when I couldn’t even tell people outside that I was trying for the championship because my rating had gone down very badly.

I was not playing chess for a while so it was like a comeback but I wanted the comeback to be really good. After my son was born it was really very difficult. I really worked hard you know. The time, whatever I got, I managed everything like my family, chess and my work. I had to go to the office also. So whatever time I got in the night I used to prepare. I have to thank Mr. Raju (Harika’s Coach) because at first, he said No when I asked him for help but eventually he helped me prepare for this tournament and I could improve on my middlegame.

With a 15 month-old-son, it is really very difficult you know. It is my sincere request to all the women chess players, young players especially: Please achieve whatever you can when you have the time. Before you get married or in your 20s, that’s what my dad used to say: "Don’t waste your time." I know I have achieved a few things but I could have done more if I had used my time more carefully.

All of us have our own set of problems and other things to do in life when you are a teenager or in your 20s. But it is my sincere advice as well as a request: "Girls, please concentrate on chess." Use your time wisely, achieve whatever you wanted to do at a young age before you get married or before you have a baby. It's very very difficult because you have to work 200% more and you are still not very sure whether you can win a tournament. I hope I get to win this in the future."

SS: You definitely are like a superwoman. Not many people can achieve this! Are you going to try for this National Premier Title again in the next few years to come?

MS: See this is the question I am asking myself because it was in 2010 I tried and it's already seven years, it takes a lot of energy. (hesitates) I am not sure, I might do it again.

SS: But you really want to win this title, it was the dream of your father, wasn't it?

SS: Well we wish you all the best and you keep inspiring us by playing and hope you win this title in the coming years.

If you found this interview useful, subscribe to the ChessBase India Channel. They have more than 800 videos! It's simply amazing the amount of quality content that they are able to produce with such great regularity.

Nongsha Angom is an aspiring chess player who fell in love with the royal game only two years ago in 2015. When he is not playing chess, he loves playing the guitar and the flute. He also has a 2nd DAN black belt in Manchurian Kung Fu and a black belt in Taekwondo. His aim is to establish himself as a chess player and play chess for the rest of his life while simultaneously promoting chess in North East India. Currently, he is pursuing a degree in English at IGNOU.