Too strong, too fast – Carlsen beats 16 opponents in 1 hour 15 minutes!

6th of October 2017 was a great day for Singapore chess. Thanks to the efforts of Norwegian Business Association Singapore, Magnus Carlsen visited the country for a simul against 16 players that was greatly enjoyed and appreciated by all the chess lovers of Singapore. The opposition that Magnus faced was not easy. Some players were rank amateurs, but there were also seasoned experts, with six-time National champion IM Kevin Goh Wei Ming (rated 2461!) being one of the participants. But Magnus showed absolutely no mercy. He cleaned up the field with a 16-0 score in little over an hour! | thumbnail image: Andrey Terekhov.

An astounding show of speed and precision!

In a move greatly appreciated by Singaporean chess fans, NBAS (Norwegian Business Association(Singapore) and Simonsen Vogt Wiig law firm organized  a simultaneous chess match for 16 players to face the World Champion at the Norwegian Ambassador’s residence on the 6th of October 2017. The organizers also roped in the support of the Singapore Chess Federation to supply the beautiful wooden Staunton sets for the occasion. Only 16 could take the seats to face the World champion but the place was jam-packed with Norwegian businesspeople and Singaporean chess fanatics, all joining in the occasion to witness the maestro at work. 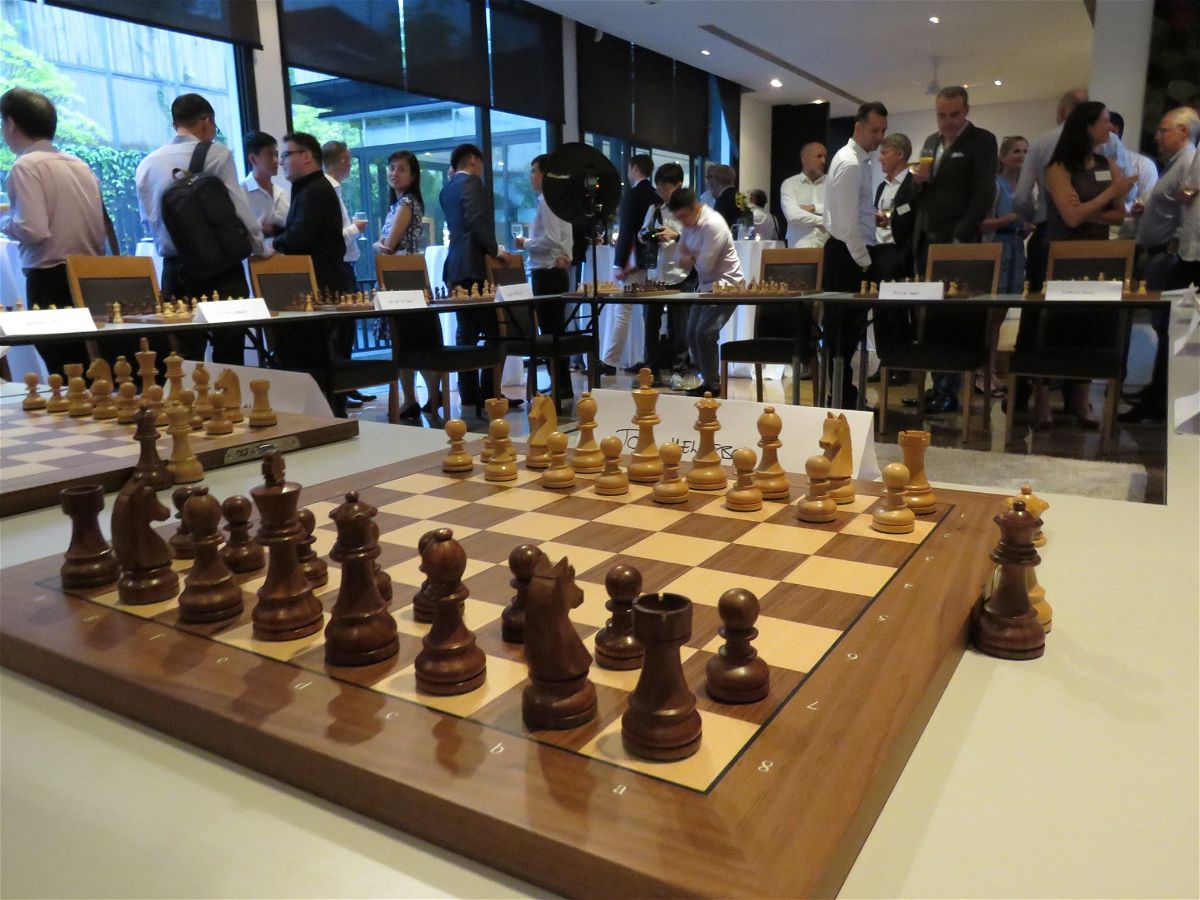 Prior to Magnus’ arrival, the emcee of the event, Mr Hakon Bruasket Kjel (Senior VP, Telenor Group) remarked to me that it is an honour for them to host someone of Magnus’ stature, and they are glad to create this avenue for local fans to get close to the World champion as well. Well, the serious chess fans operated strategically too, placing themselves at the doorway to ‘ambush’ Magnus upon his entrance and they were rewarded for their strong positional sense with autographs as well as a beaming Magnus pic. 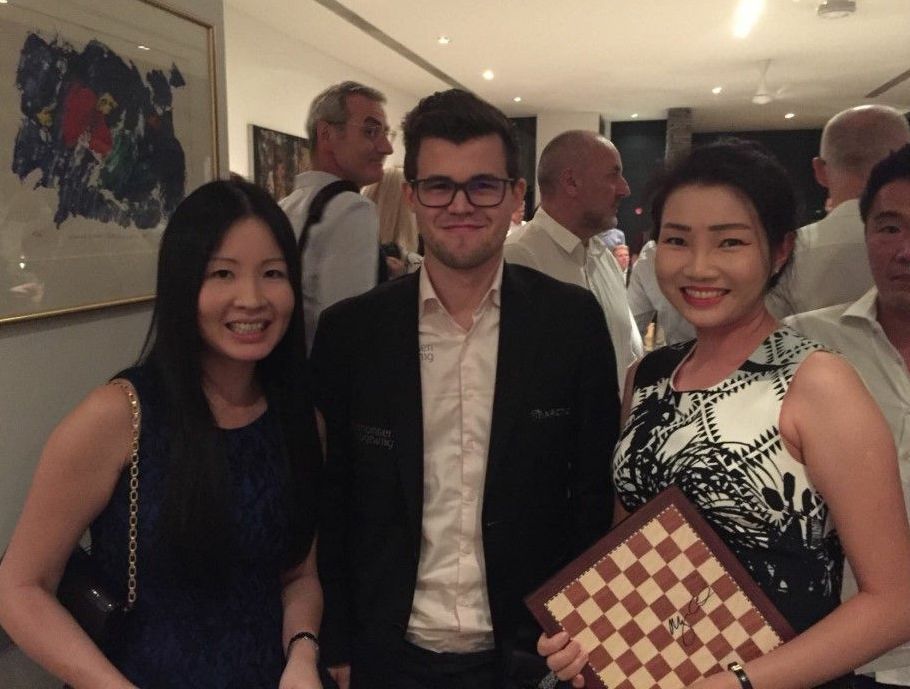 Hakon opened the event by introducing the players who were about to get the game of their lives:

4) Magnus Grimland, NBAS board member and co-founder of Zalora 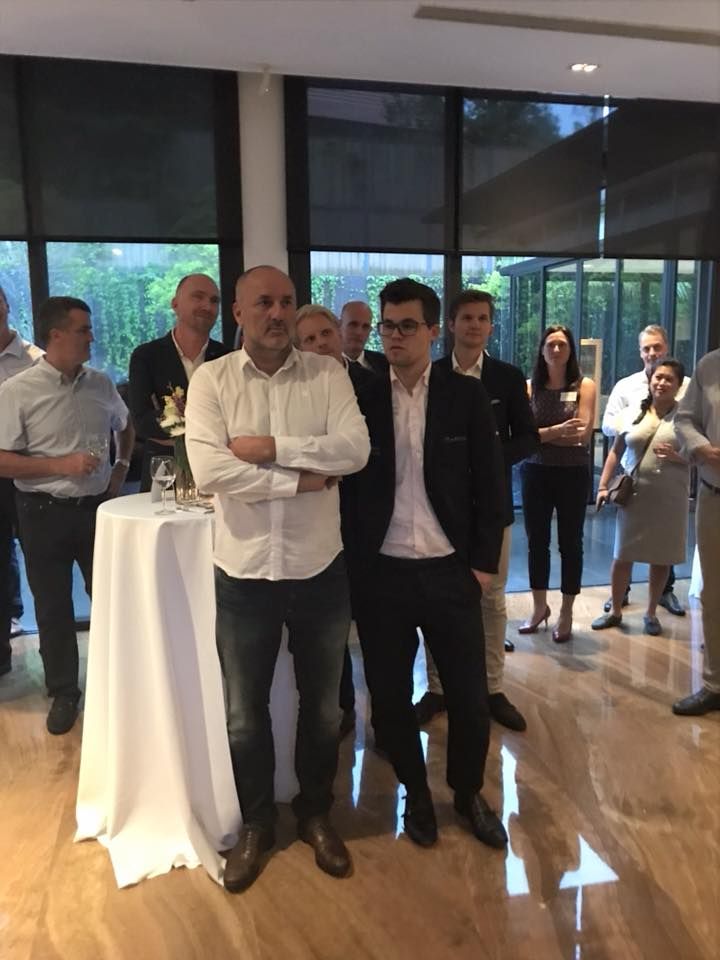 One very much appreciated innovation was Team Carlsen’s FM Espen Agdestein’s running commentary to the audience on how each player was doing every few moves. 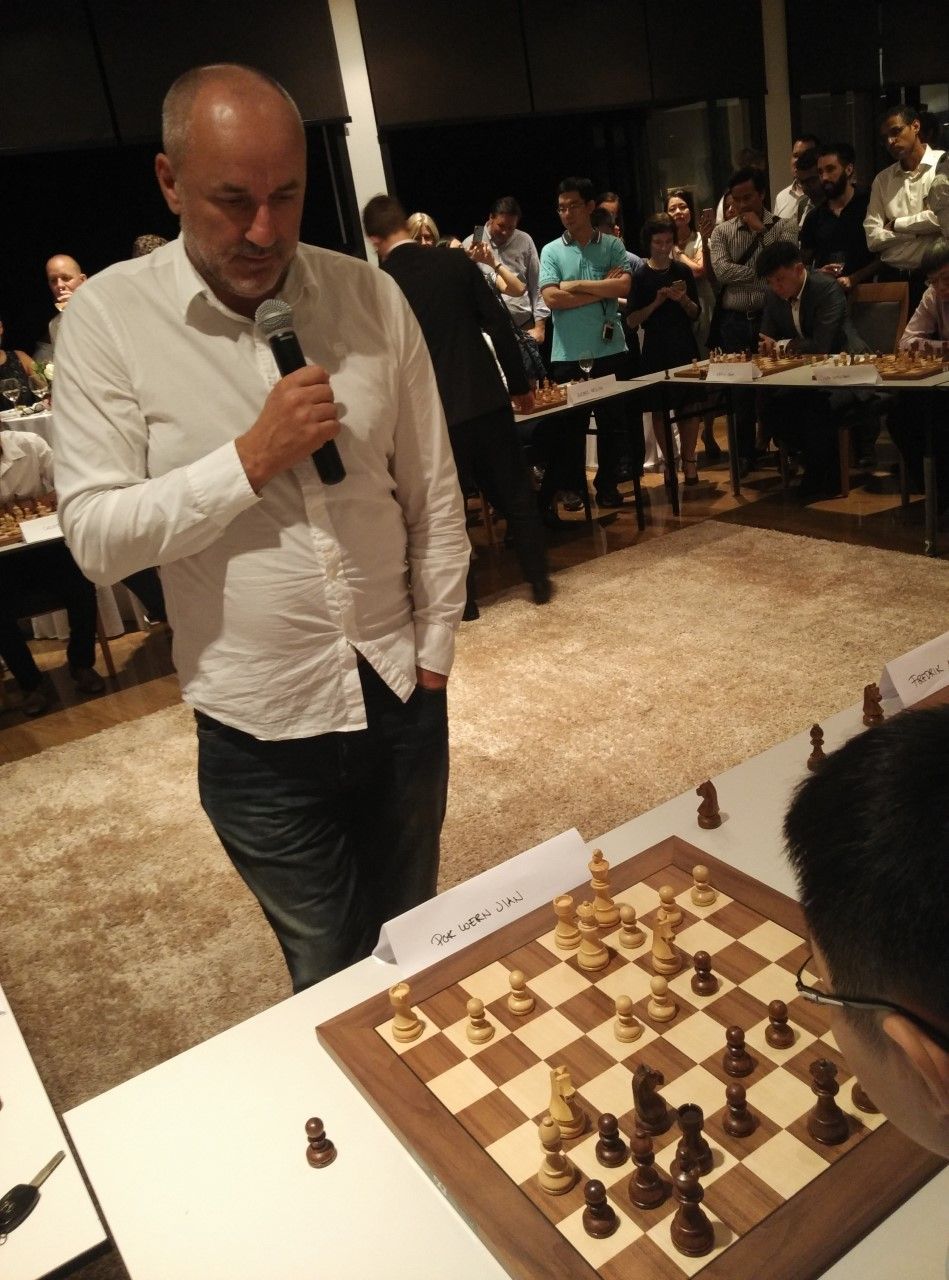 Soon, it became apparent that Olimpiu, Kevin, Chien Earn and Joshua were putting up strong resistance, especially, Kevin who was assessed to be giving Magnus an interesting fight. Espen also helpfully explained to the audience that typically, a player of Kevin’s stature (a 2461 rated IM) would not be participating in such a simul exhibition but Magnus loves a challenge so there you have it. Before the game, Kevin remarked in jest that he would be facing a third member of the Norwegian Olympiad team, having fought GMs Simen Agdestein and GM Aryan Tari to draws only a month ago. So can he keep ‘Team Norway’ at bay? 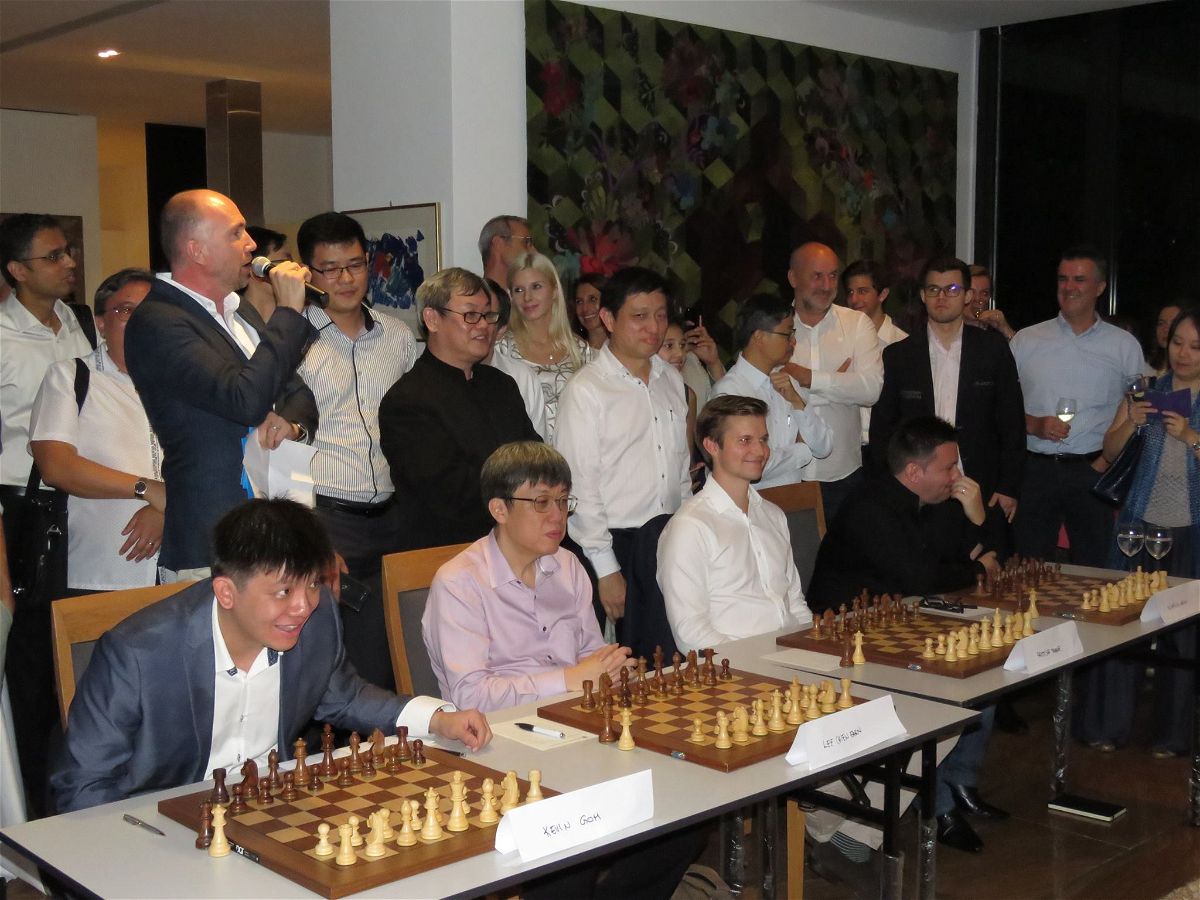 As I expected (having witnessed how Magnus dealt with 11 players (including 2 IMs(!) in a 2015 Chess.com online simul) Magnus played almost instantly on each board, moving from board to board with amazing speed. Clearly, the players were placed under tremendous pressure (how does the dude think so fast?) having to deal with his speedy moves. An ironic choice of chess literature placed by Tom Hellebø, perhaps appropriate given how swiftly Magnus was making the rounds. 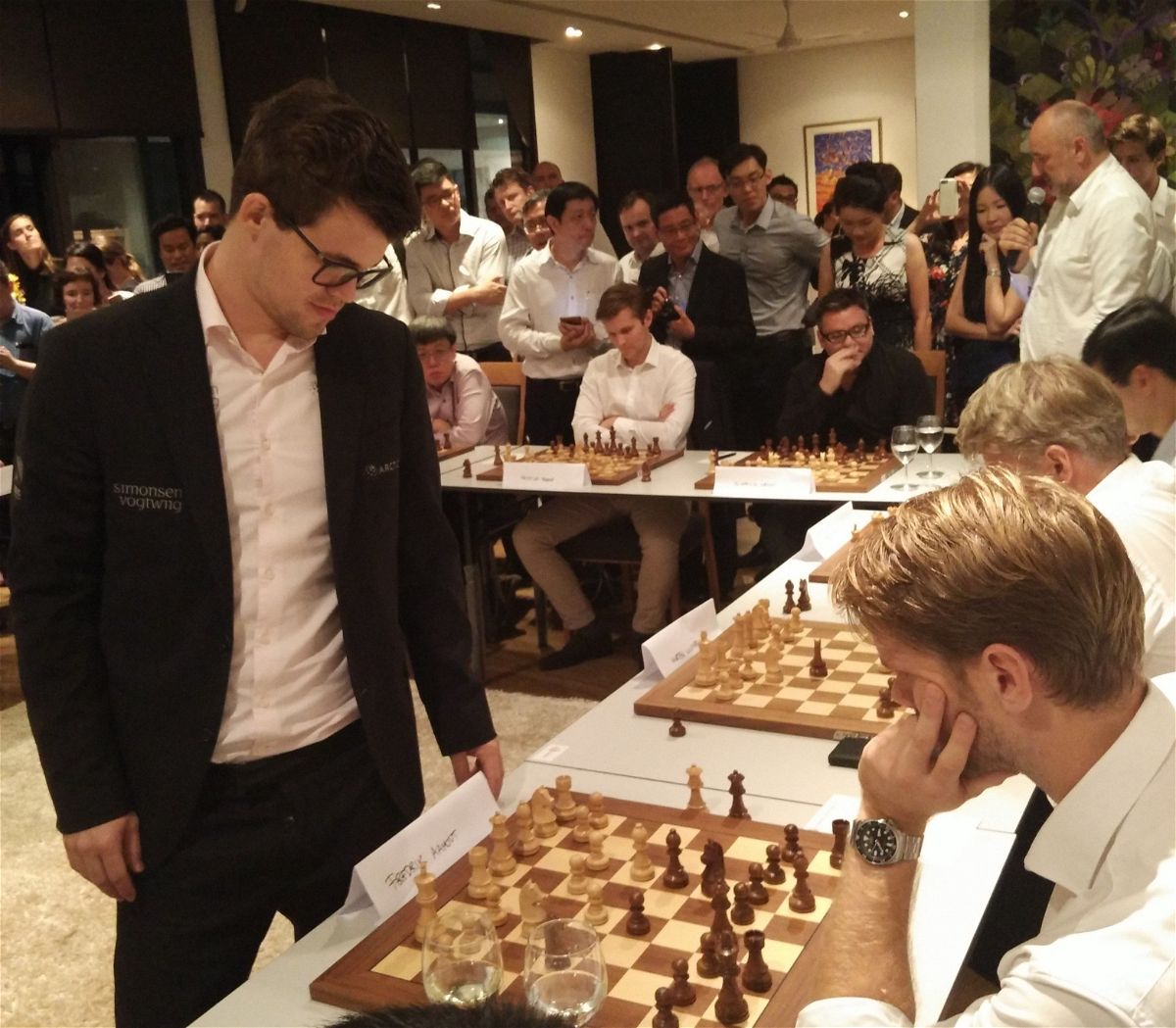 He’s back again?…OK,let’s hit f2 and see how he responds…

Within a hour and a quarter, all 16 opponents were routed, though Dr Lee Chien Earn put up great resistance. 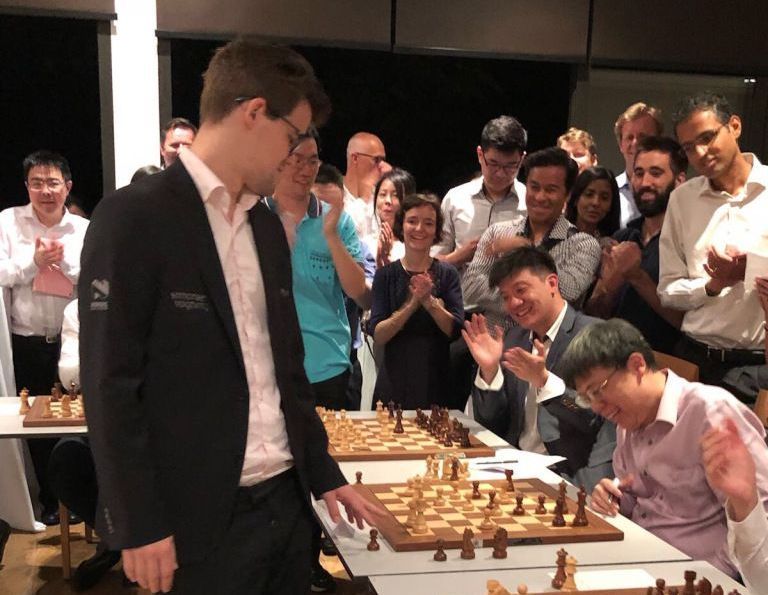 Dr Lee resisted the longest against the Maestro

Dr Lee Chien Earn (father of FM Lee Qing Aun) was the last opponent to lay down the arms. Just as we thought it was the end of a great show, Magnus went one better by explaining in detail about how the games went for the stronger opponents he faced! Here’s a transcription of what Magnus commented and the games he was commenting about.

"Against Kevin Goh, I was probably a bit worse out of the opening. I think he made a crucial mistake by putting his rook on e8, and had Kevin not lost a pawn, he would be In very good shape". He went on to analyse with Kevin in greater detail as seen in the following game annotated by the latter below.

"I also noticed that Olimpiu played the same opening I recently played against Kasimdzhanov. I assumed it was …..(Olimpiu interjected at this point “A bit of trolling?” amid laughter) part of a joke. Anyway, this game I solved this problem of the wayward rook and it is very difficult for Black to improve his position".

"I thought I had some advantage from the opening but he defended very stoutly with Knight on e6 and Knight on f6 and I couldn’t for the life of me see how to make progress but eventually I got the pawns moving and I think he played a bit too fast. At several points, it was possible to go for counterplay with ….c4 but I assume especially in a simul, you want to hold and not rock the boat unnecessarily".

Magnus even went to demonstrate to the audience ‘a funny position’, a cute stalemate position for Earn Chien, assuming the latter could get rid of his major pieces (not possible, according to Magnus, to the laughter of the audience). 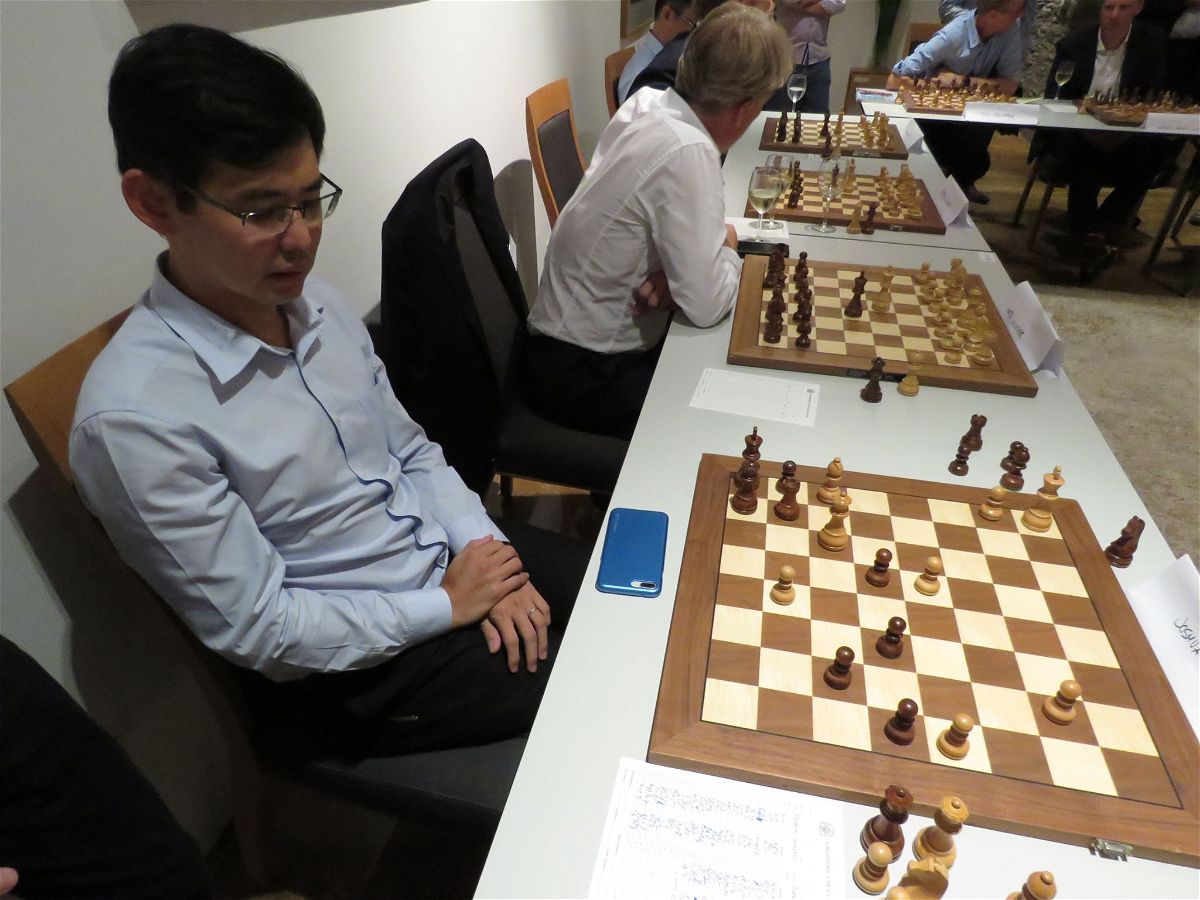 Epsen remarked that Magnus had a nice finish against Joshua Lim and the World Champion remarked “Yes, I thought at some point you played very well with the regrouping …Rc8, …Bd7, …Qd8, …Ne8 so I sort of had to take action with f4 but maybe you could have played …Nd6 a bit earlier on. If I take on e5, my e4-pawn is hanging as counterplay. Maybe you should go for …e5 at some point to give up a pawn and at least activate the pieces, advance the pawns in front of my king and it might be exposed”.

Magnus’ final comments about the field

"In general, I think several of the players were giving too much respect, so maybe next time play a little more aggressively. It’s not easy to strike the right balance".

And with that, the crowd showed their appreciation with much applause. What more can you ask for, a masterclass display, a running commentary during the game and patient post game analysis by the world champion himself! As IM Hsu Li Yang remarked, after the games, Magnus was also very generous with his time after the game with the audience, signing autographs and taking pictures with fans for a long time. A really successful event for which we must really thank NBAS, Team Norway and Simonsen Vogt Wiig for organizing and our host, Norway's Ambassador Designate to Singapore, Ms Anita Nergaard!

This article was originally published on Junior Tay's blog and has been reproduced here with his permission.