IM Pranav Venkatesh (TN) and FM Harshad S (TN) were second and third in the Open event scoring 7.0/9 each. Mrittika Mallick (WB) and Shubhi Gupta (UP) secured second and third place scoring 7.5/9 each in the Girls event. Tamil Nadu bagged top four places in the Open, five in total among top ten. In the Girls event, West Bengal got two out of top four and Maharashtra secured two among top ten finishers. Uttar Pradesh, Andhra Pradesh, Delhi, Tamil Nadu, Karnataka and Telangana earned a place each among top ten. 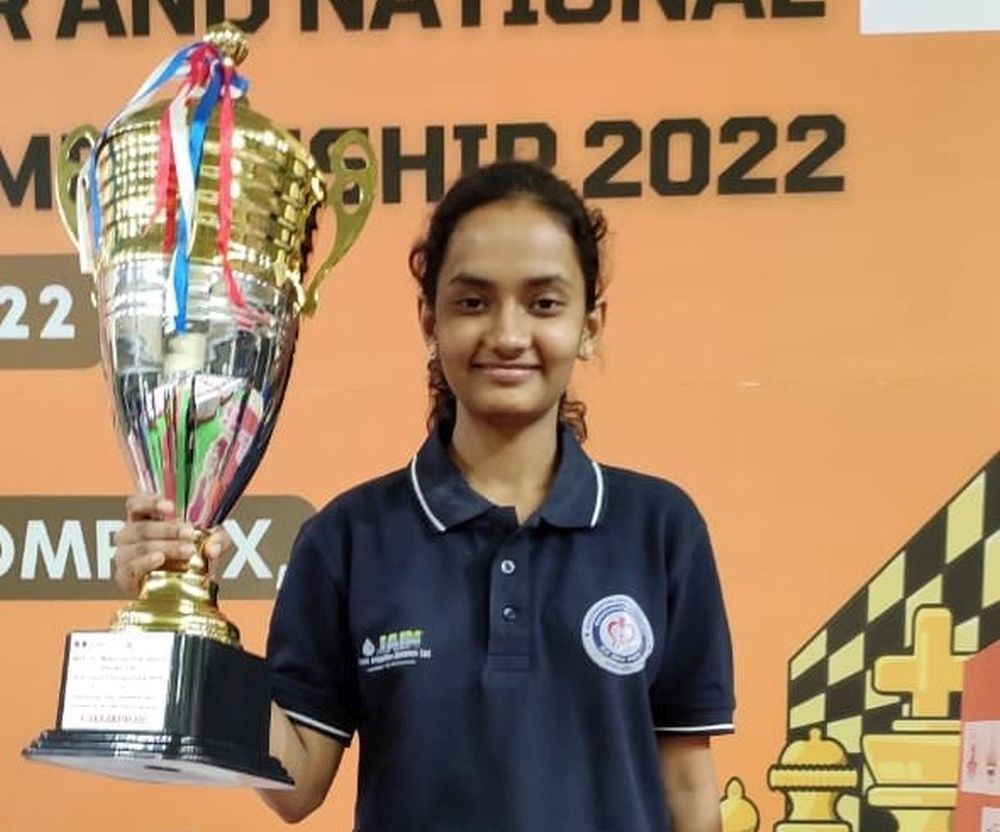 Both Mahendra Teja Mekala (AP) and IM Pranesh M (TN) had their fair share of chances in the endgame. The former had more and the reason behind that is probably time trouble. 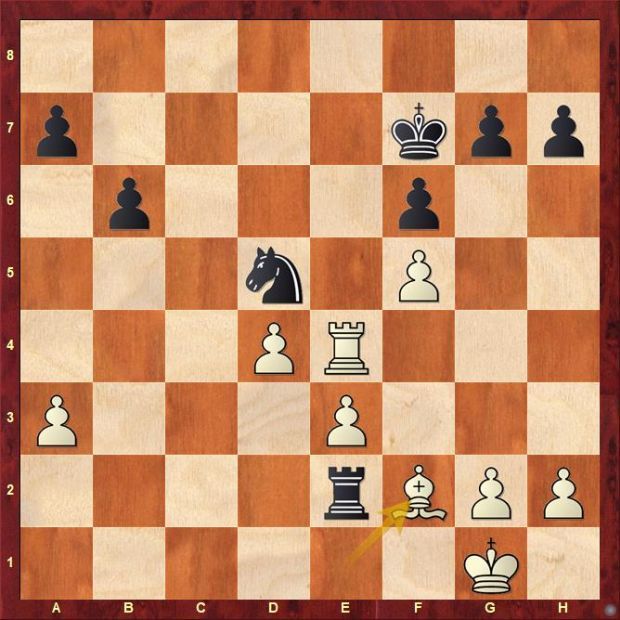 28...Ra2 drops the pawn. The rook at e4 is precariously placed. It makes things difficult for White combined with the fact of back-rank weakness. 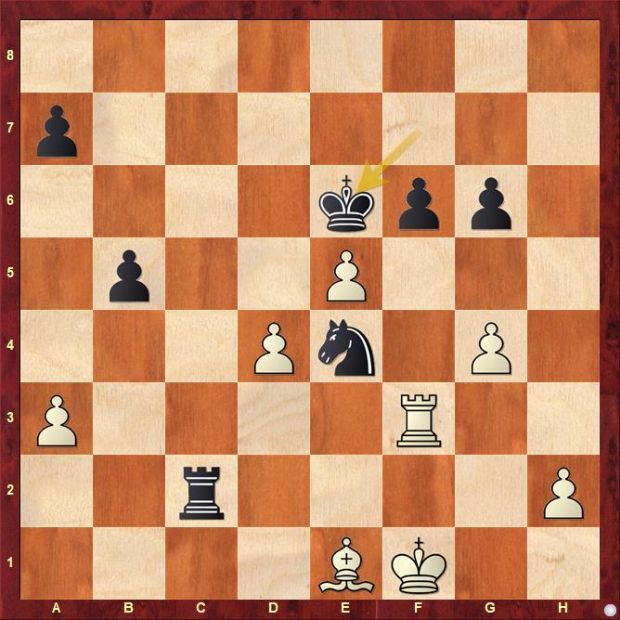 First real opportunity White had in the game was after 36...Ke6. Find out what was the best continuation for White here. 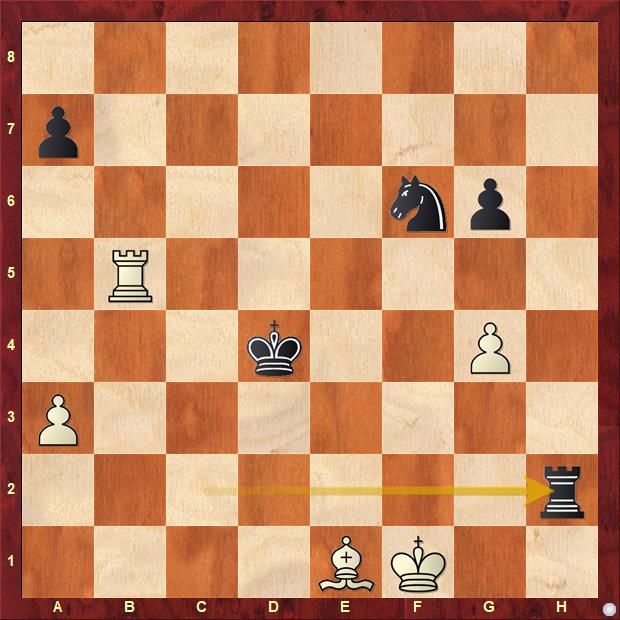 White's final opportunity to score a win was 41.Bg3 threatening Be5+. It is easy to spot these during analysis but that much difficult when the clock is ticking and it's the penultimate round against the tournament leader. 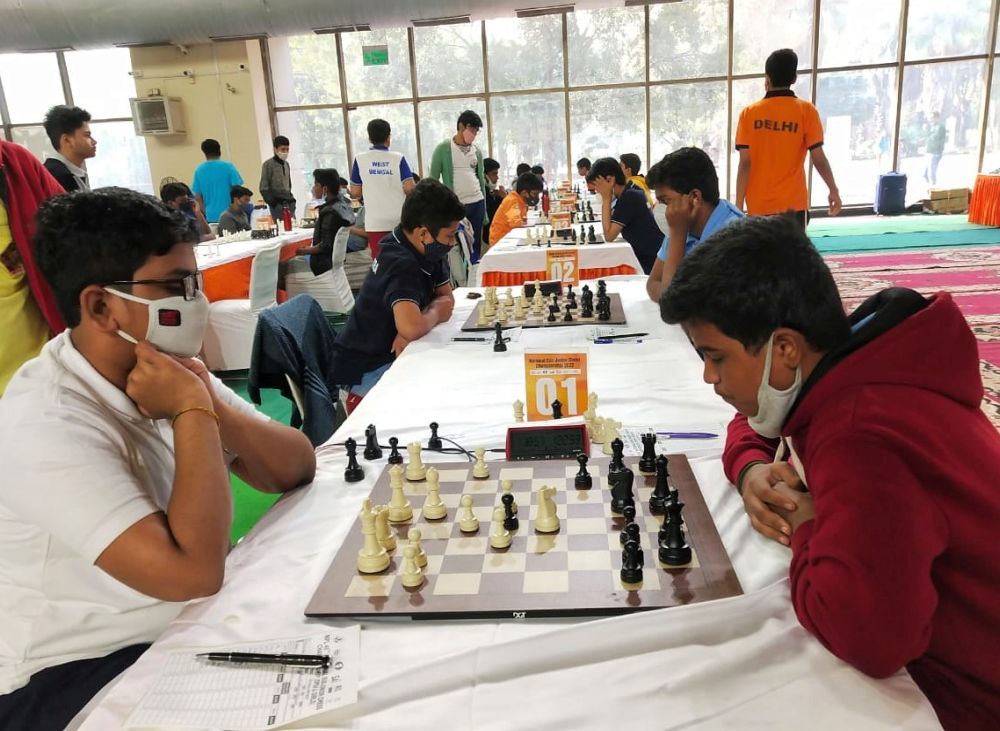 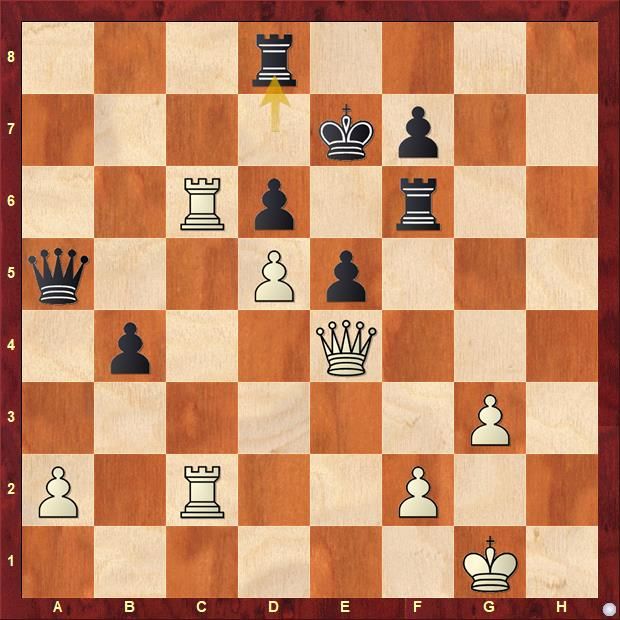 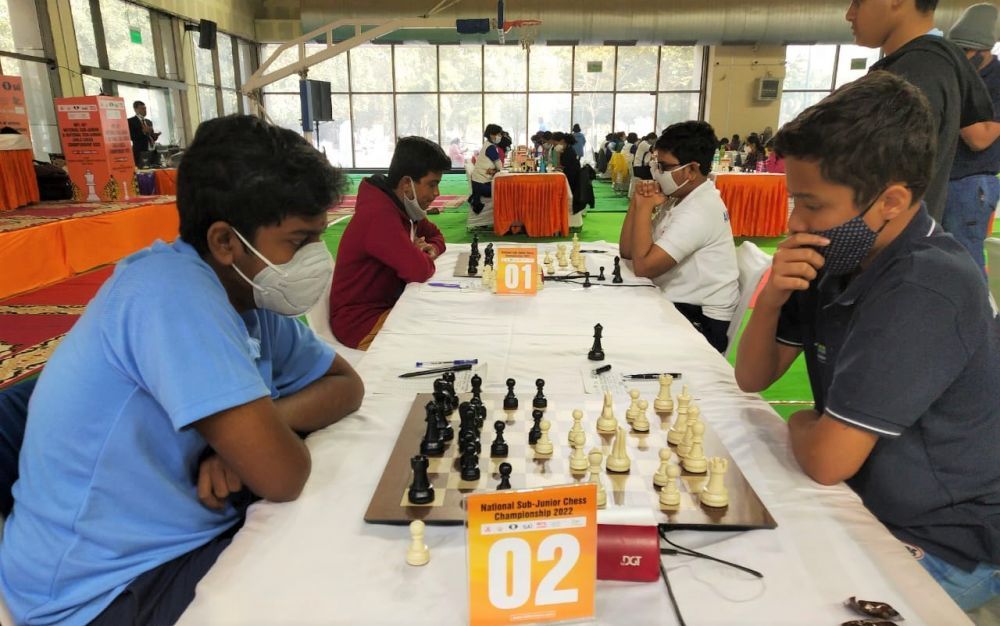 Gaurang was on the brink of victory against Pranav | Photo: IA Jitendra Choudhary

IM Pranesh M (TN) drew with Kushal R Jani (GUJ) comfortably. It was enough for him to win the championship. 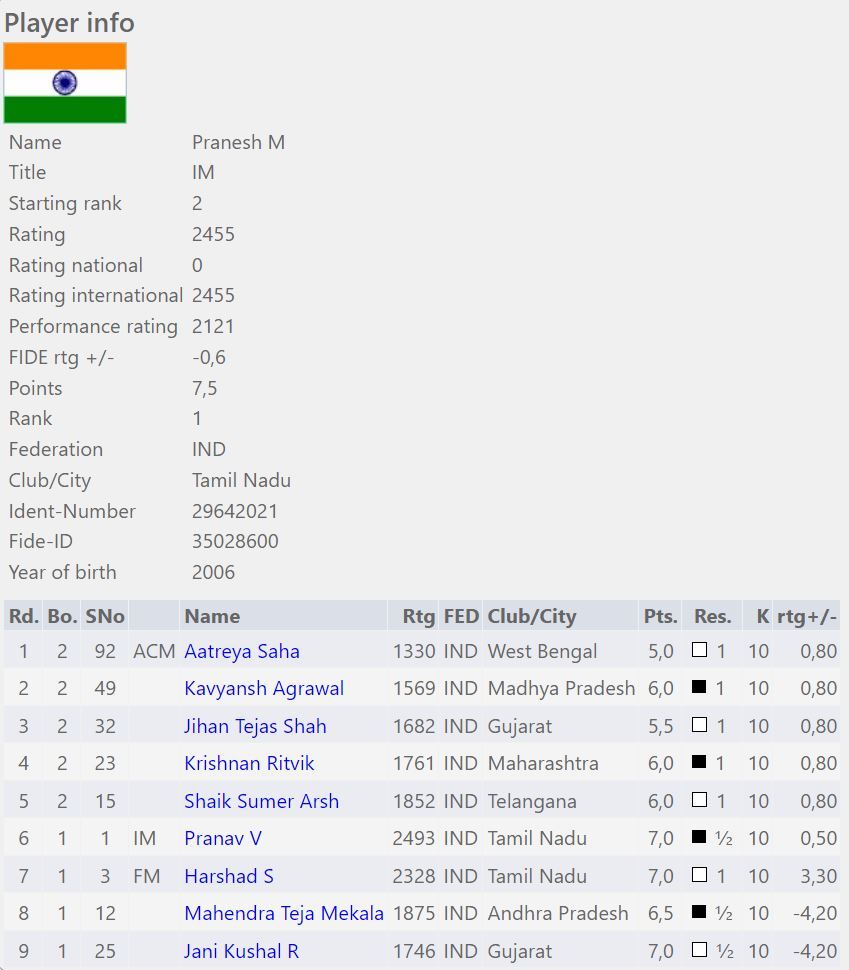 Pranesh scored an unbeaten 7.5/9 and finished a half point ahead of the field 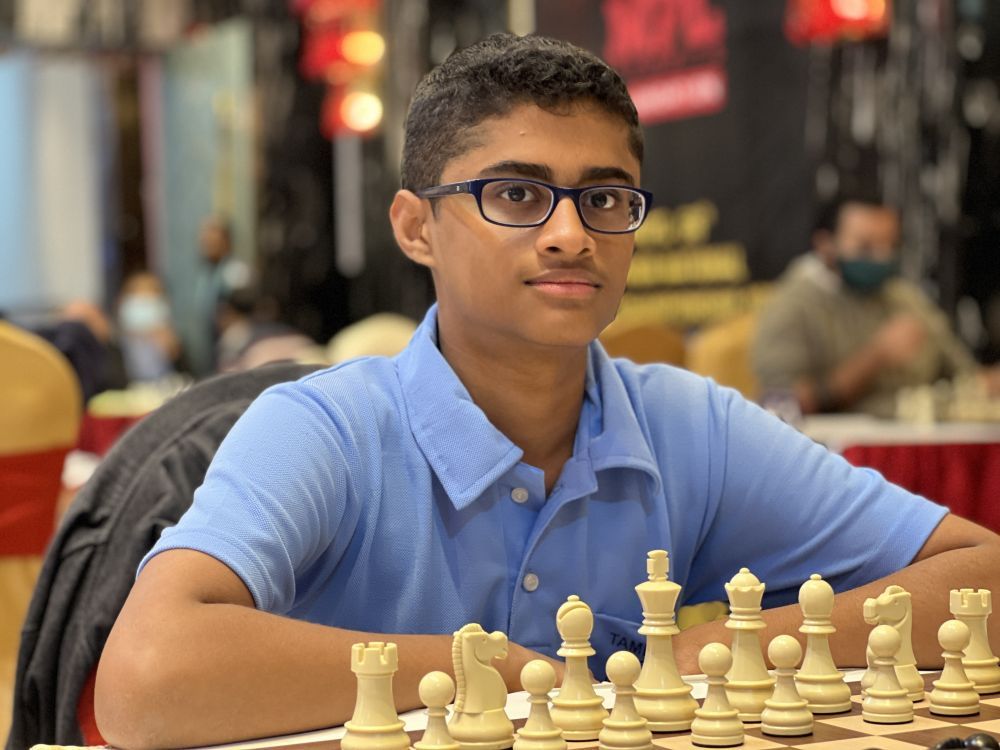 Tanisha Boramanikar (MAH) got into trouble early in the opening against Mrittika Mallick (WB). 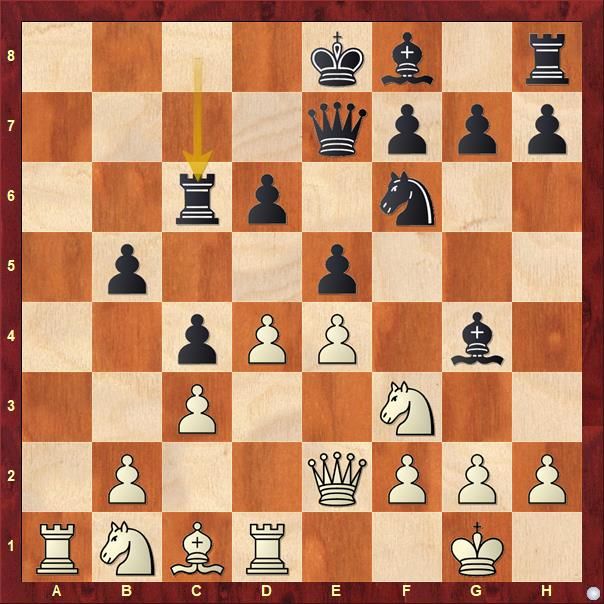 15.Ra8+ Rc8 16.Rxc8 Bxc8 17.dxe5 dxe5 and the attack fizzled out. Instead 16.h3 first would have made things difficult for Black. The king stranded in the middle of the board and the lack of good squares for the bishop and the c6-rook would have created a lot of trouble. 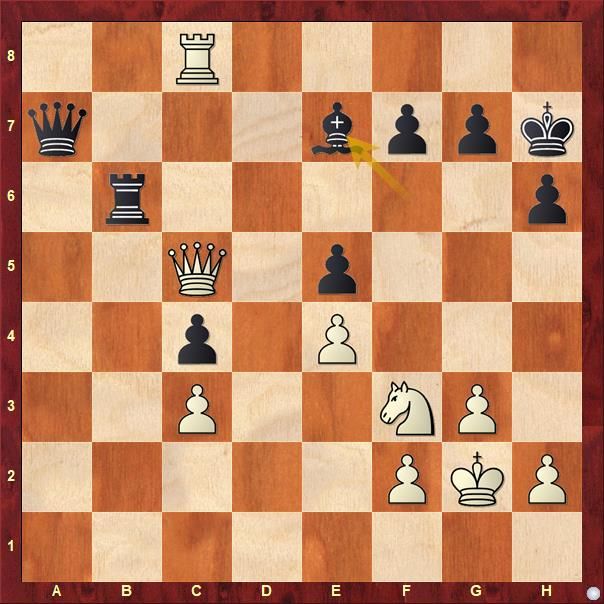 White kept pressing for the majority of the endgame which eventually led to a big mistake 34...Be7. White obviously took the pawn 35.Qxe5 Bf6 but then she did not follow through correctly 36.Qc7 Qxc7 37.Rxc7 and it meandered into a draw. 36.Qf5+ g6 37.Qc5 was the better alternative. 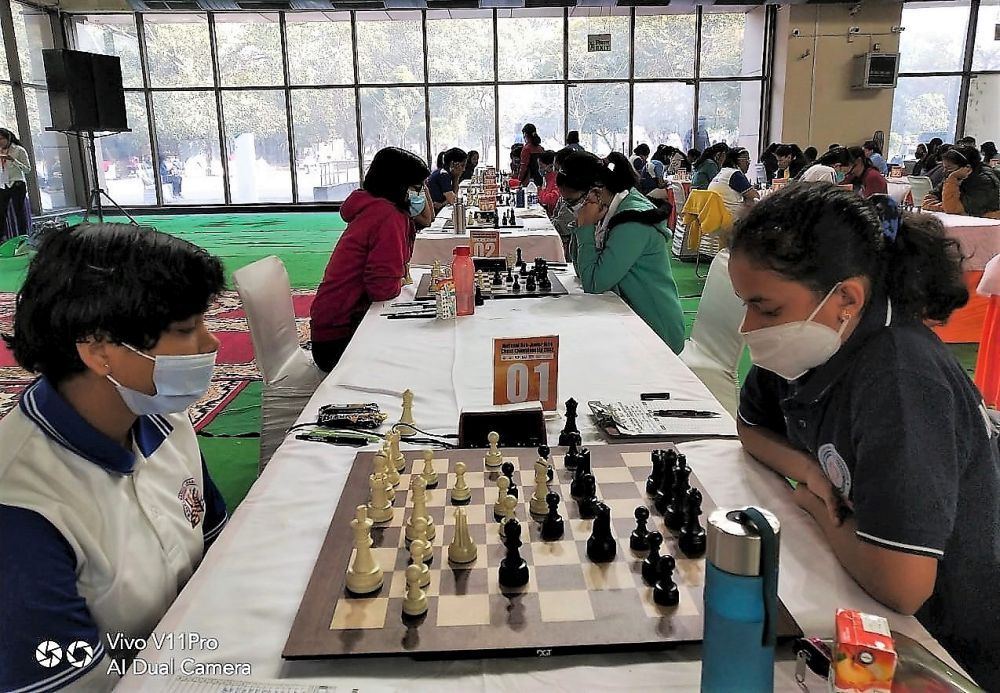 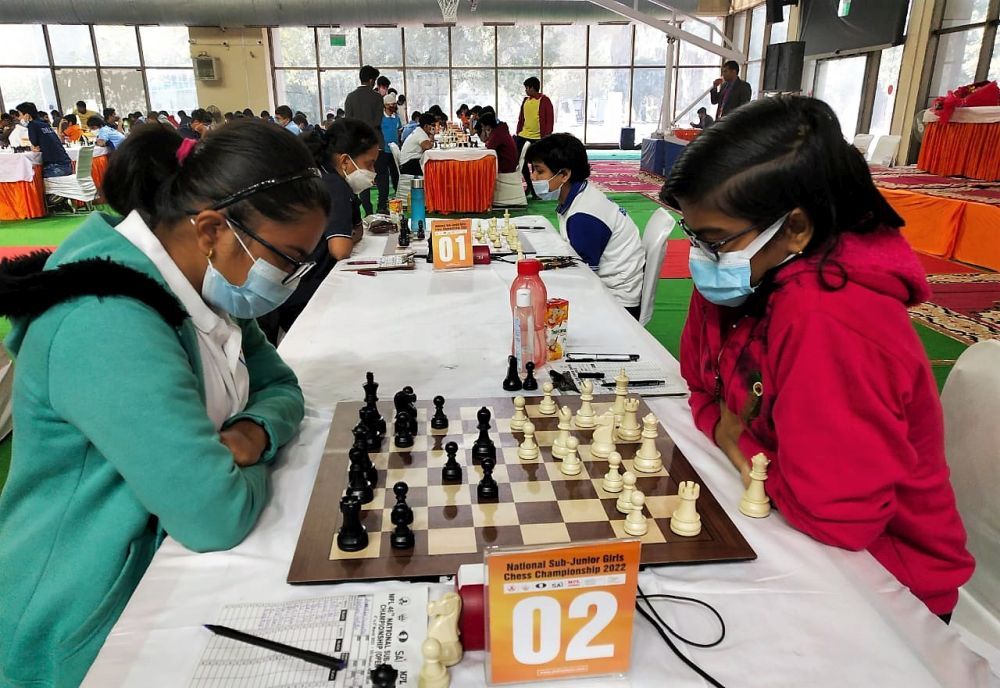 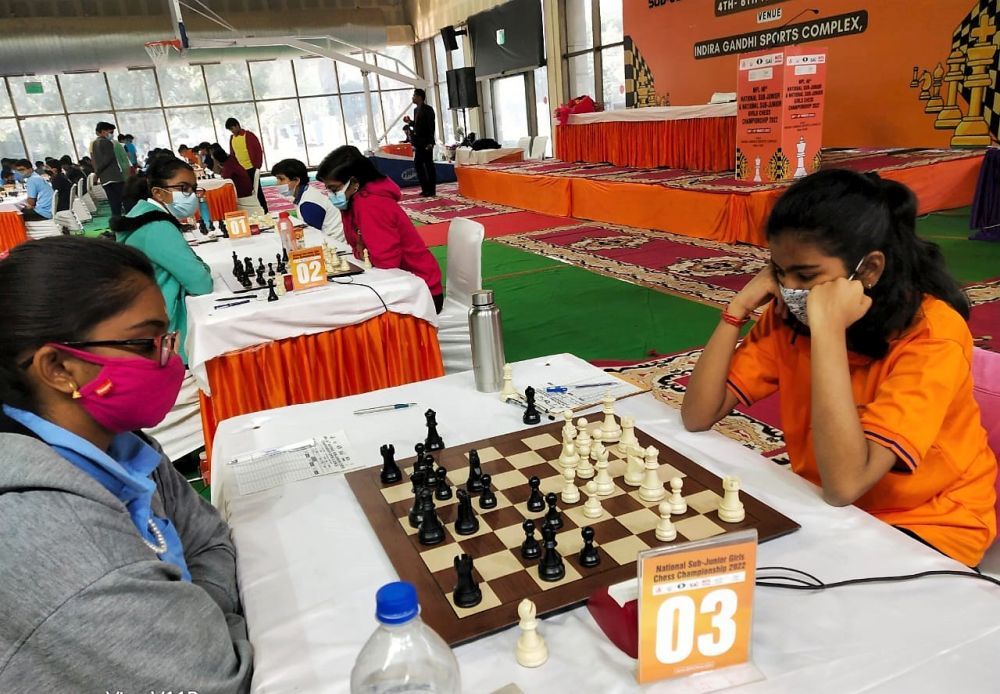 Shubhi Gupta (UP) defeated Keerti Shree Ready (TN) with a slightly not so smooth finish at the end | Photo: IA Jitendra Choudhary 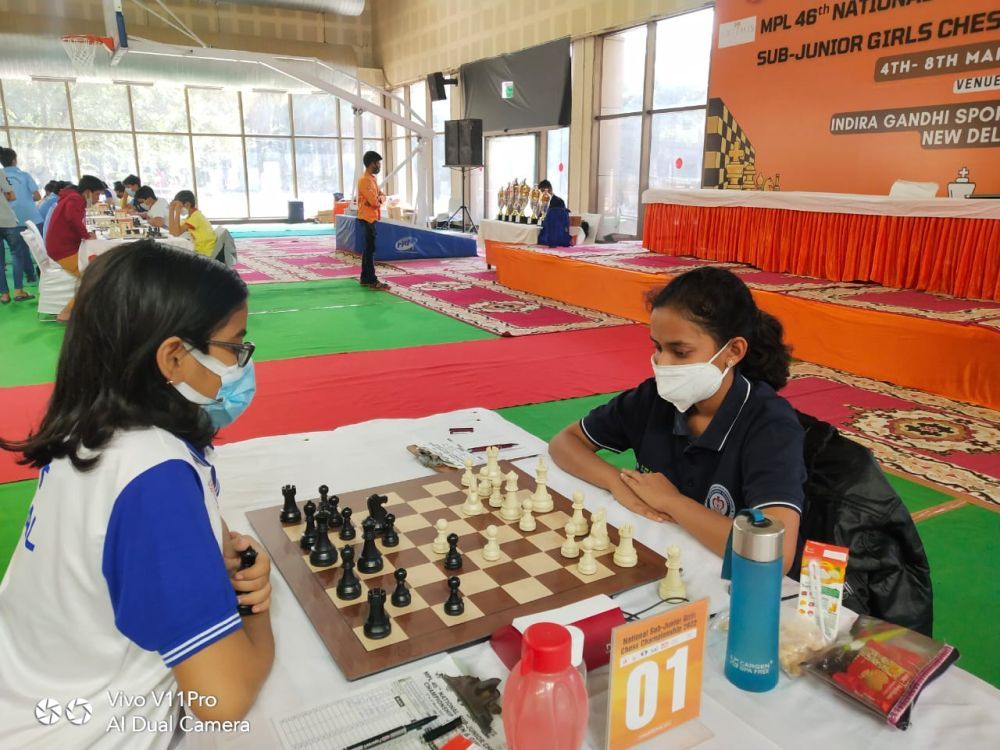 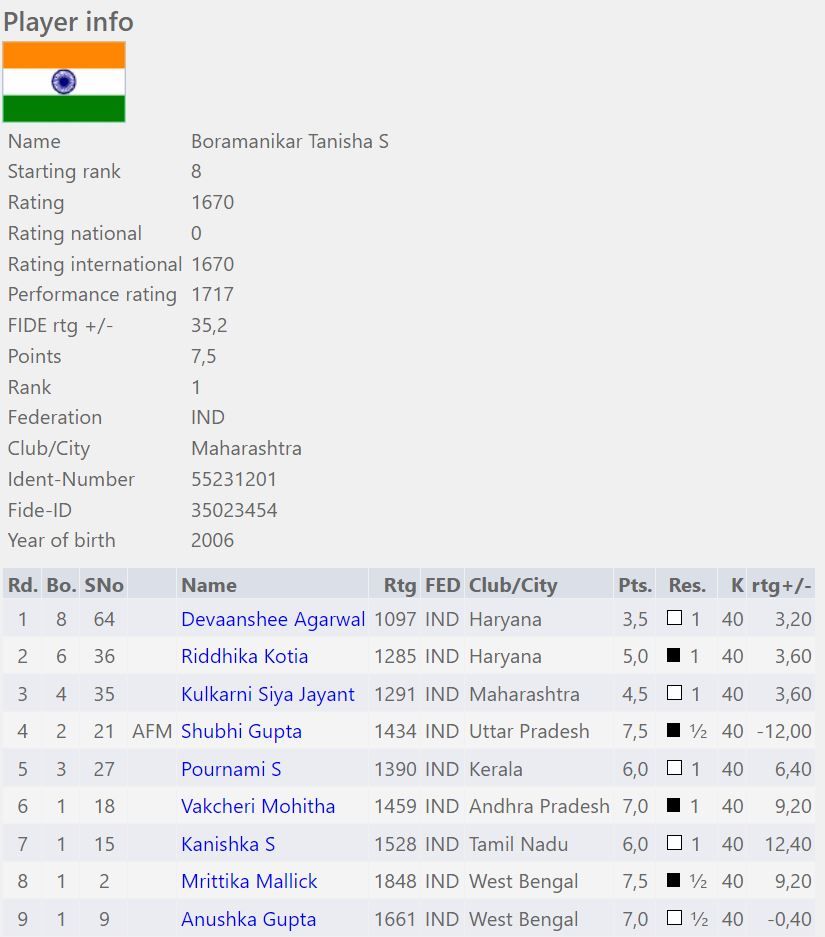 Knowing that a draw will not be enough to secure a podium finish, Sarayu Velpula (TEL) pushed too hard in the endgame for a win. Mrittika Mallick (WB) overcame a difficult position in the middlegame and waited for her opportunity. 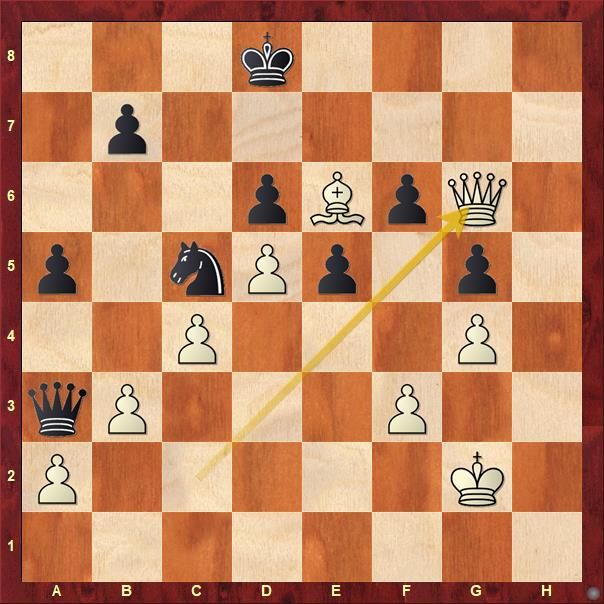 It is well-known that the combination of queen and knight is better than queen and bishop. Since the position is closed and White's king is more vulnerable, it was time for Black to seize her chance. 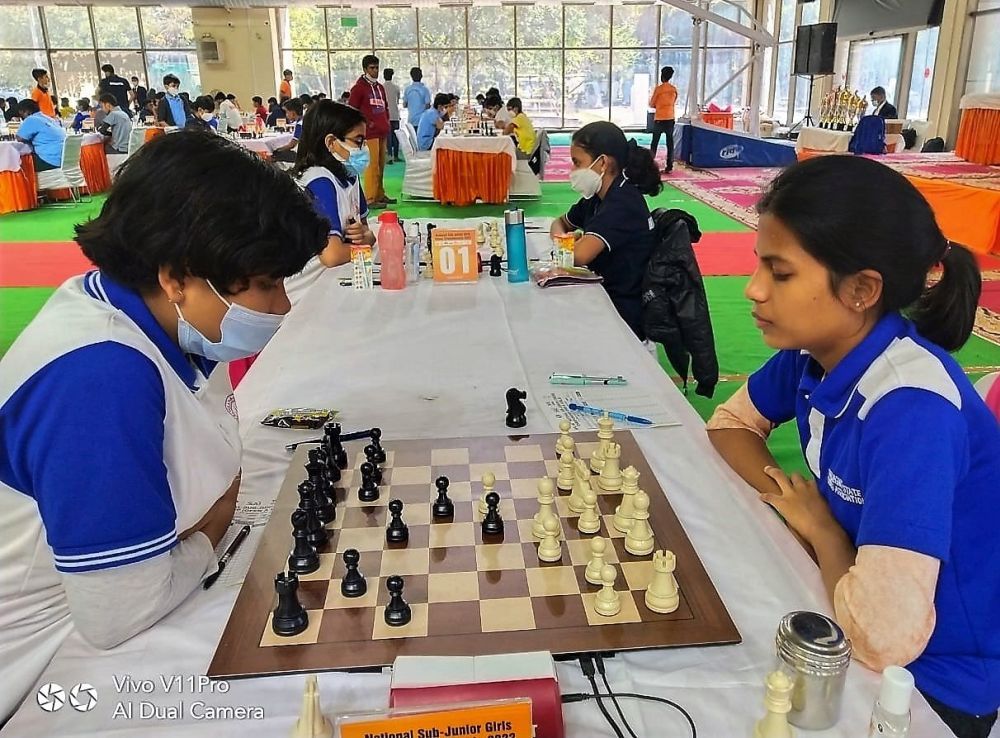 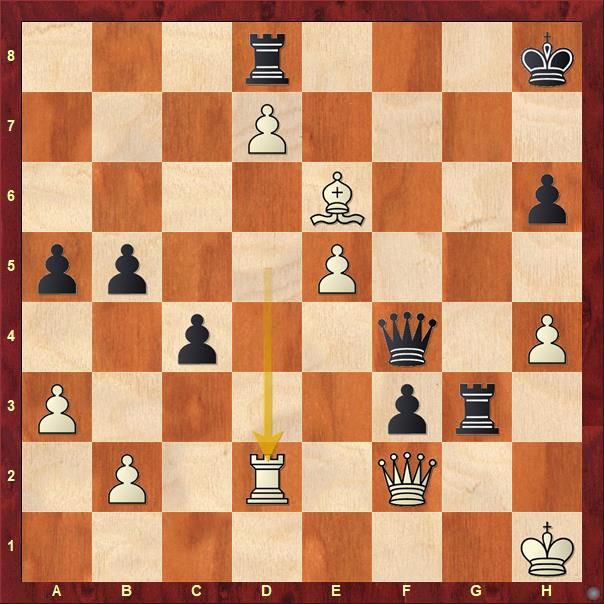 Find out the beautiful checkmate combination for Black. 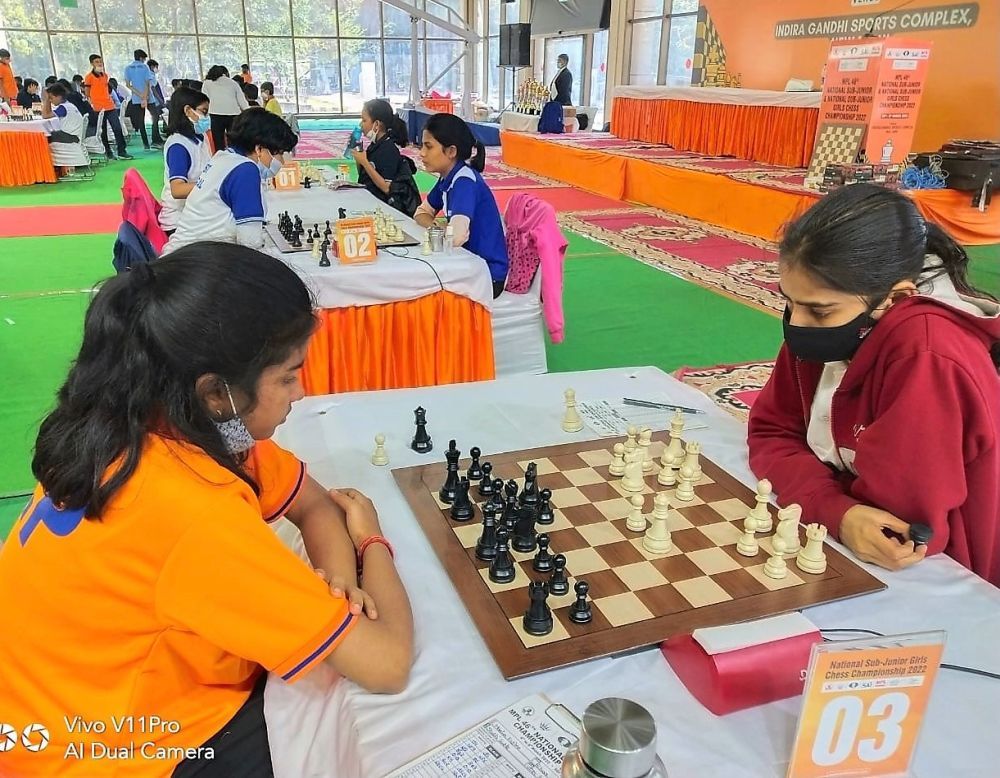 For more Round 8 and Round 9 photos, please click on the respective links.

A total of 175 players including 2 IMs in the Open and 113 players in the Girls tournament are taking part. It is organized by Delhi Chess Association. Both tournaments are taking place at Indira Gandhi Sports Complex, New Delhi from 4th to 8th March 2022. The nine-round Swiss league tournament has a time control of 90 minutes + 30 seconds increment from move no.1