Nostalgia at the Women National Challengers 2017

Manisha Mohite is a former national chess player. She had played in India's top tournaments during the 80s and 90s. Later she was one of the best chess reporters of the country covering some of the best exploits of Vishy Anand and Harikrishna Pentala at the world level. But in the last few years she had been off the chess grid. She decided to return to the chess atmosphere at the National Women Challengers 2017 held in Mysuru, Karnataka in July 2017. It was then that she saw few of her competitors from the 90s still going strong. Nostalgia prevailed and Manisha sent us this beautiful report.

Mystical Mysuru seeped in Royal culture with its tradition of Maharajas somehow appeared to be the right city for a game oozing with history and royalty.  Only, it were the Maharanis of chess who descended on the city to participate in the National Women’s Challenger Chess championship which concluded last month end. WGM Bhakti Kulkarni of Goa emphatically clinched one of the 8 qualifying slot for the Premier National Women’s Championship by emerging outright champion with a 9.5/11 performance. 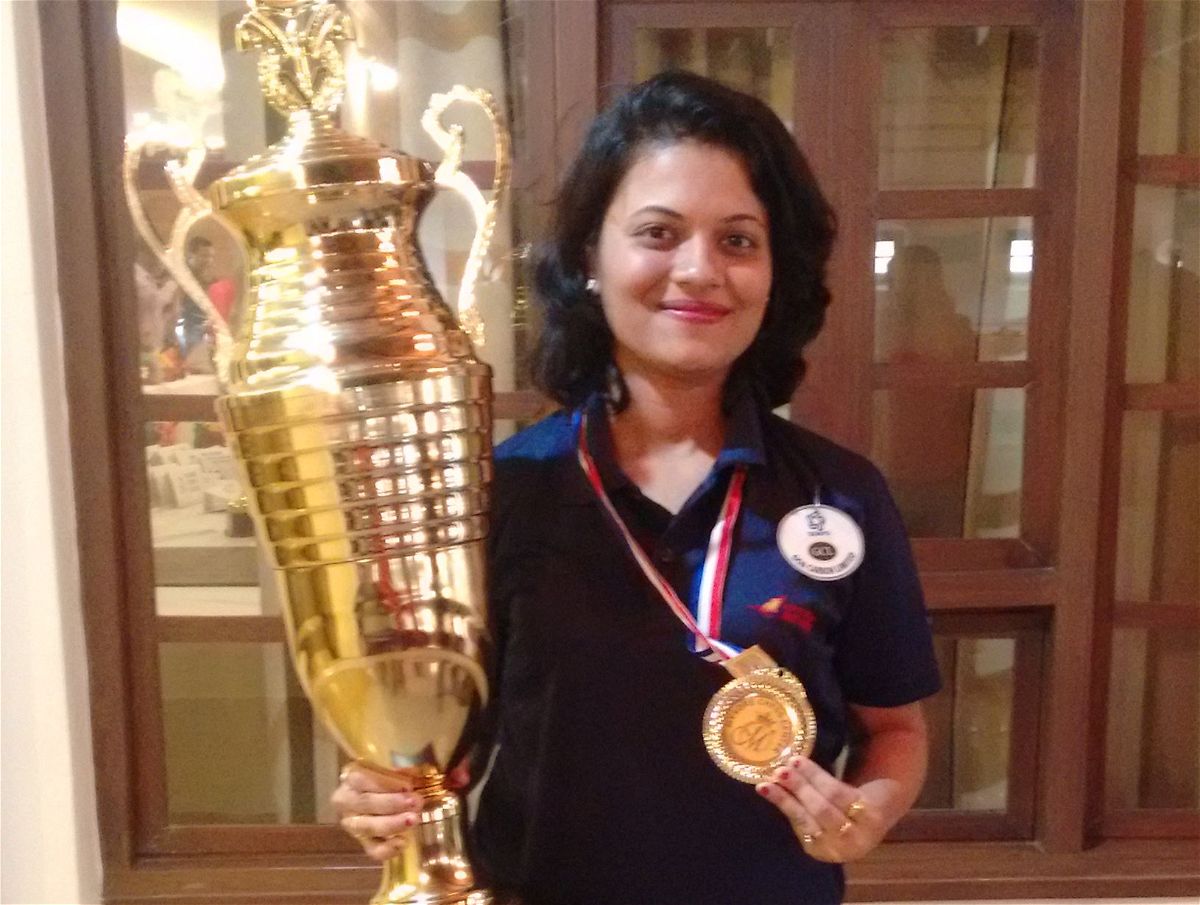 The winner of the 44th National Women's Challengers event 2017

The delightful grin and twinkling eyes of Bhakti may stand out and convey the final picture of the event, eclipsing the image of the downward grimace and blinking eyes - the result of a disastrous defeat in the very first round.  Bhakti preferred to peep behind positively and labelled the loss as a "wake up call." Is it always possible to look back at things with a different perspective in hindsight? Can we erase or downsize the difficulties which at one time appeared insurmountable? Would we be able go back and start our journey again, on a fresh note? Or are we just like the pawns which advance ahead, well aware that backing off is not an option –not in chess.

Here let me admit that my visit to watch the National challenger was an attempt to glance back, check on those who kept moving and wonder what keeps them ticking! An urge to connect with players with whom I had interacted and played last, 25 years back to be precise, in 1992 at Calicut National B. I was jolted, perhaps not more than Bhakti was in the first round, to witness the intensity and passion with which most of them still pursued the game! WGM Swati Ghate, WGM Nisha Mohota, WGM Meenakshi S, WGM Aarthie Ramaswamy, Jayshree Sankpal and Bindu Saritha were the players who have been marching on and not just because they didn’t have an option.

30 Nationals in 40 years is as mind boggling as the myriad variations possible in a chess opening but for 58-year-old Jayshree Sankpal, it is routine business as usual. For Sanskrit scholar, the much awarded and decorated Professor Premaleela Mallana, juggling her profession and passion with equal fervor has been a way of life, even now at 68 years. These two ladies interestingly exhibit chess culture in different ways, Jayshree inheriting it from her father and Premaleela passing on the baton to her daughters. 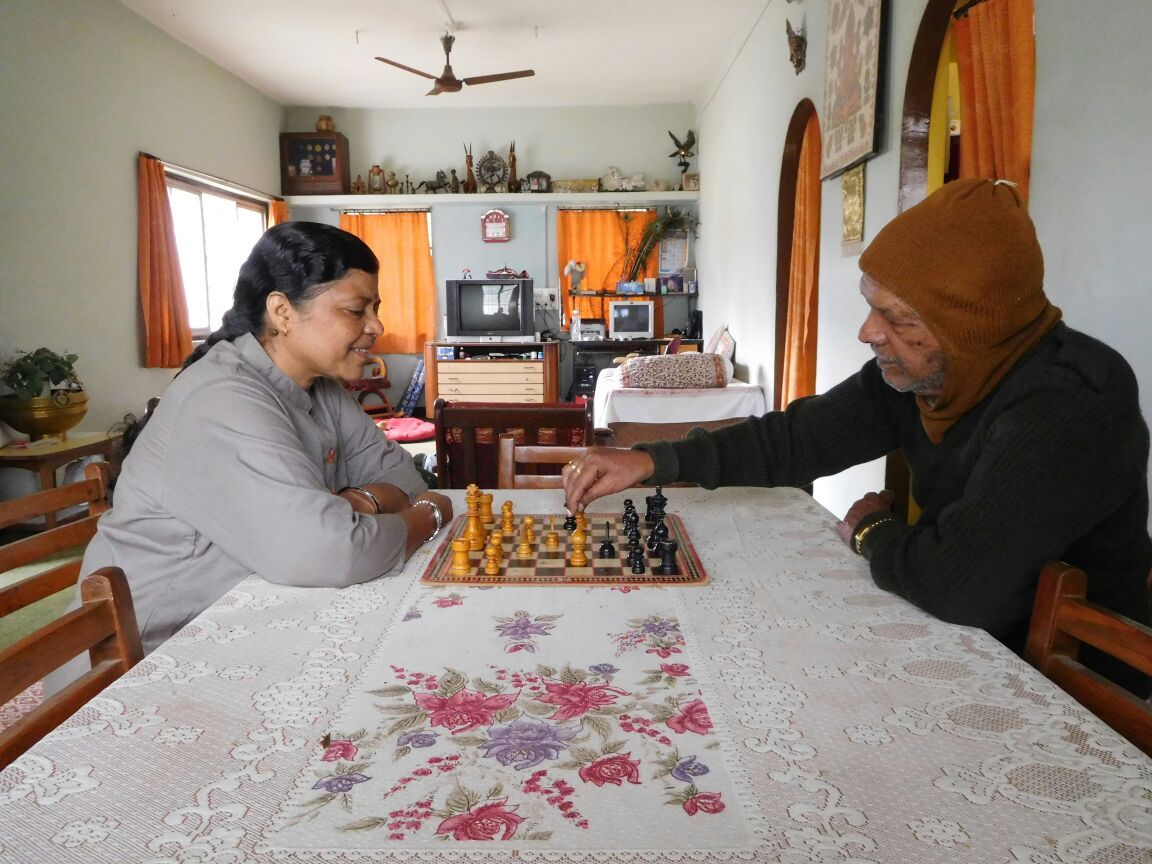 Jayshree Sankpal with her 89-year-old father Pandurang Sakharam Sankpal. Jayshree's father has matched his wits with great players of Indian chess like Sapre, Mhaiskar and Padsalgikar in the past

Premaleela has been winning the best veteran prizes for a while now but interestingly very few chess players know about this literary genius who was bestowed the Dr. Radhakrishna National Award for literary publications in Sanskrit and “International Women Year Award 2012 in the field of creative Compositions from Kendra Kannada Sahitya Parishad. She has also authored several books in kannada language and translated Classic English Poems to Kannada. 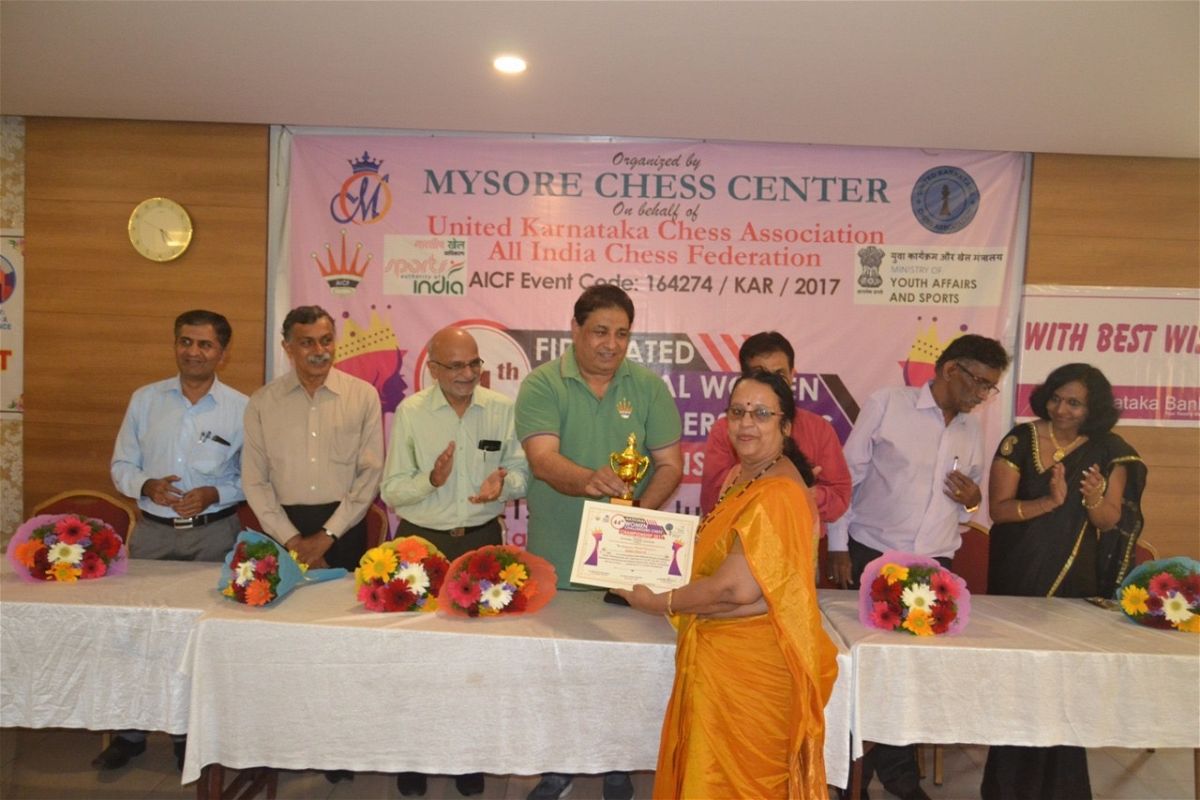 The calm, collected and  soft spoken Premaleela based in Mysore virtually plays a role in all aspects of chess from playing, to organizing to promoting and often hosting chess players in transit at their home. In fact her daughter Kavyashree commented "My mother's love for chess is admirable as she used to tag me along as a six-year-old to tournaments where she was participating as the concept of babysitting was alien then.” Kavyashree and her other sister Kavanna too have won a few state titles and Kavyashree runs a chess company ‘Celestial Minds” in the US. Premaleela’s husband, Prof Mallanna is also an acclaimed singer. “We are an unusual duo, I write poems, songs and dramas and my husband sings them.” 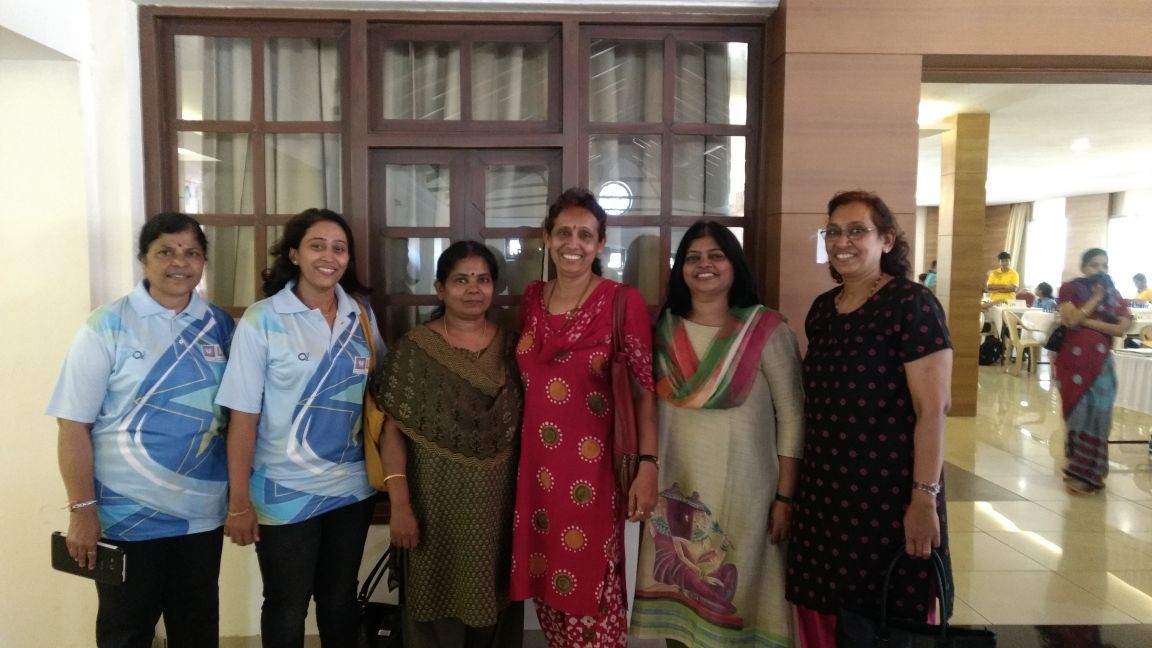 Jayshree on the other hand grew in a chess culture where her father Pandurang Sankpal cycled a few kilometres from Ashta to Sangli (the chess hub then) to play with the late Bhausaheb Padsalgikar and B P Mhaiskar. Jayshree played her first National way back in 1977 (Women’s first National was held in 1974 at Bangalore). Jayshree won the Maharashtra Women’s title four times in succession which is a record. She was also the first chess recruit in LIC in 1981. She finished fifth, twice in the Women’s Nationals and represented India at the 1986 Commonwealth Championships and was the receipient of the Chhatrapati Award, the highest state award in Maharashtra for sporting excellence.

If Jayshree continued to fight her battle on the 64 squares, both her children preferred real warfare, opting to serve the country in the Armed forces. Her son  Captain Ravishankar Kadam is currently posted in Uri while daughter Jigeesha is undergoing training as an Air force pilot. 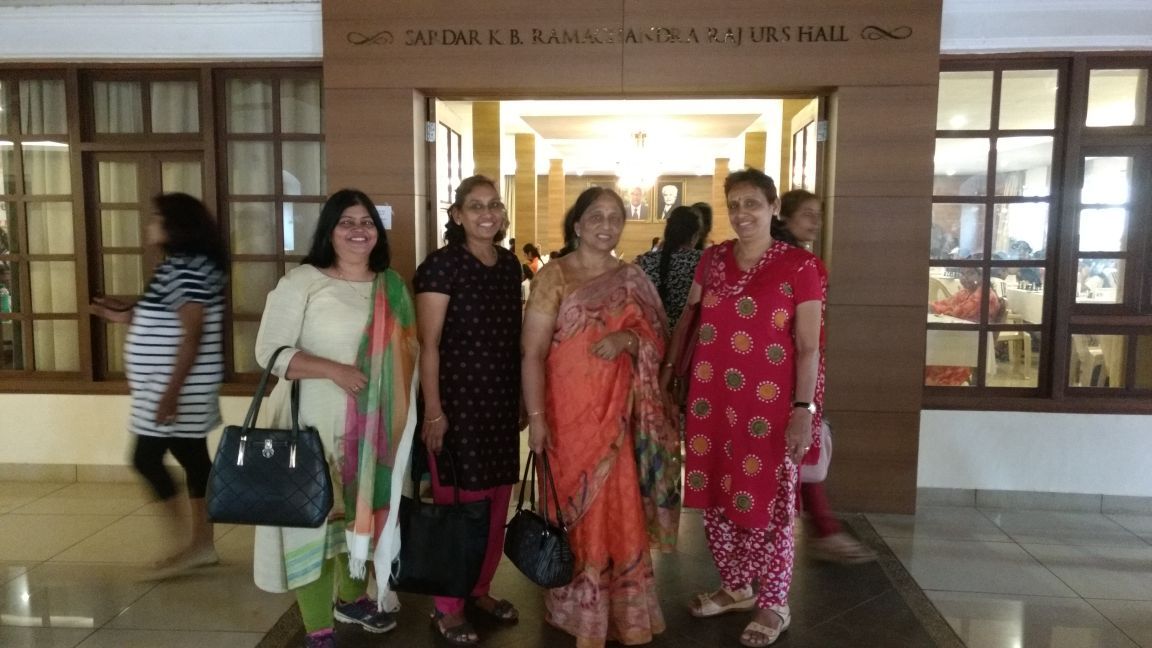 Left to right: The author of these lines Manisha Mohite, KS Sujatha, Mayura G and KS Shashikala. All have played Nationals for their country!

Each and every chess player has his or her story which needs telling but for the bunch of us who traveled from Bangalore to Mysore (4 of us who have played the Nationals at least thrice) , it was a nostalgic moment. A time to reflect, reacquaint and perhaps to retrospect! 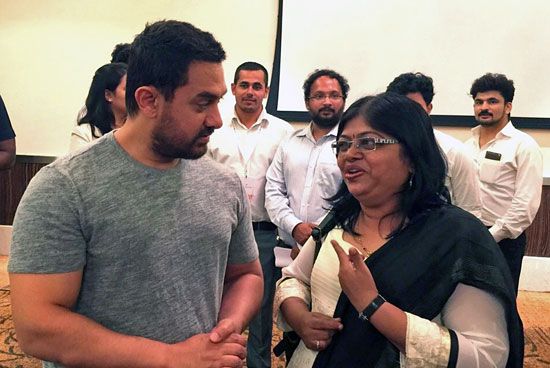 Manisha Mohite was one of the most prolific writers for chess in India when Vishy Anand was on a rampage winning one World Championship title after another. She has written for a variety of important newspapers like Mid-day, Deccan-Herald, Sify Sports etc. Currently she is based in Bangalore and is planning to make a competitive return to the game of chess!

The women National Premier will be held later this in Gujarat from 24th November to 6th December. It will be a 12 players Round-Robin. This is how the participants will be selected:

Clarification of the rule:

It should be assumed that Humpy and Harika will not participate in the National Premier. This means that we have only three more players above 2350. They are Tania Sachdev, Eesha Karavade and S. Vijayalakshmi. These three will qualify for the National premier. However, if any of them does not participate, then ninth, tenth and eleventh place of National Challengers (Samriddha Ghosh, Swati Ghate and Arpita Mukherjee) may have a chance.