Day one of the Grand Chess Tour Leuven Rapids turned out to be a disaster for the Indian ace, GM Viswanathan Anand. Out of his three games in the day, Anand lost the first two and drew in the third. In the very first round, Anand suffered a shocking defeat at the hands of Shakhriyar Mamedyarov who conducted a brilliant attack on Anand's king to take home the full point. Against Anish Giri in the second round, Anand, even though a pawn down seemed comfortable but mishaps in the rook endgame

The Grand Chess Tour got underway with the Your Next Move rapid and blitz event in Leuven, Belgium on Tuesday evening. The event has attracted some of the top players in the world like Fabiano Caruana, Wesley So, Levon Aronian, Maxime Vachier-Lagrave and so forth. India’s frontman in Leuven is Viswanathan Anand. Magnus Carlsen was also an invitee to this world-class event but the world champion declined the invitation. Another player to decline to play in the Grand Chess Tour is the Russian number one, Vladimir Kramnik.

Over a span of five days, from June 12 to June 16, 2018, nine rounds of rapid chess and eighteen rounds of blitz are scheduled to be played in the historical Leuven Town Hall, a castle built in the 15th century. The rapid games will be played on the first three days of the event while the blitz tournament is reserved for the last two. 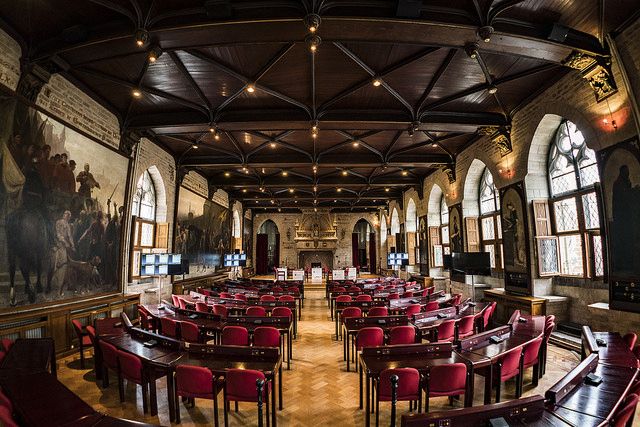 A quirk of the Leuven event is that the time control for both rapid and blitz tournaments will have a delay instead of the usual increment. While the rapid event will be played with a time control of 25 minutes for the entire game with a 10-second delay, players will get 5 minutes with a 3-second delay in blitz.

A dreadful day for Anand

Three rounds of rapid chess were played on the inaugural day. At the conclusion of all the games for the day, Filipino-American GM Wesley So found himself on top of the leaderboard with a score of 5/6. In his three games, So was able to score two wins and a draw. The scoring system for rapid games is such that it awards two points for a win, one point for a draw and none for a loss. 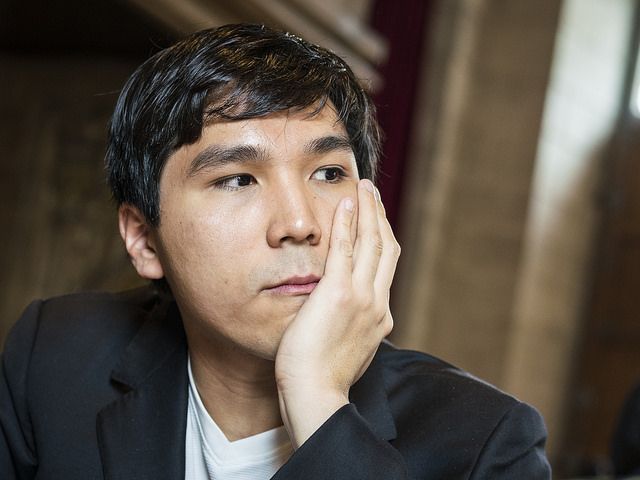 For Vishy Anand, the opening day was a complete disaster. He, with So’s compatriot, Fabiano Caruana, finished on the bottom of the table with 1/6. In his three games, Anand was only able to score one draw.

In the first round, Anand was caught in an opening surprise by the Azerbaijan grandmaster, Shakhriyar Mamedyarov.  To Anand’s king’s pawn opening, Mamedyarov responded with a Sicilian Defence. The Sicilian is indeed a standard opening in top-level chess, but it was Mamedyarov’s second move that was the shocker. He opted for the Nimzowitch variation of the Sicilian, a line very rarely seen in top-level chess. 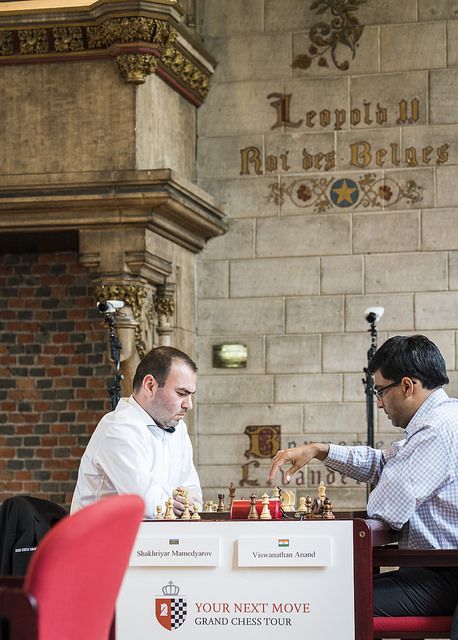 Mamedyarov won with a startling piece sacrifice in round 1 | Photo: Lennart Ootes

Anand reacted energetically, sacrificing a pawn for initiative quite early in the game but the position was really double edged. This made Anand expend not only a lot of thought but also a fair bit of time off his clock. The crunch moment of the game came on the 21st move when the Azerbaijan grandmaster went for an all-out attack against Anand’s king with a daring bishop sacrifice. 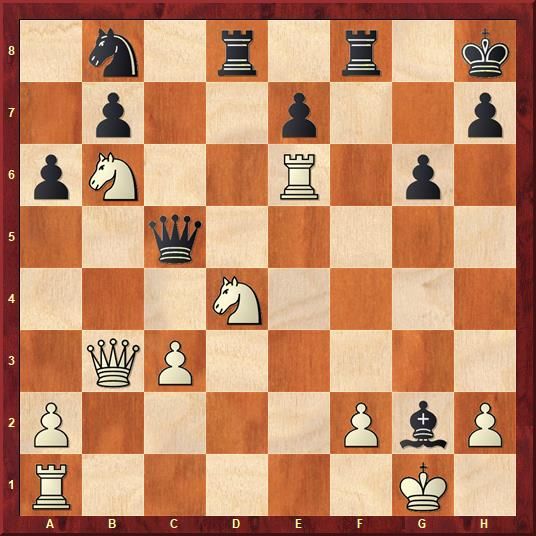 At first, it wasn’t clear where black’s compensation was but as play progressed, Mamedyarov conducted his attack with computer-like precision. Anand tried finding the best moves and even managed to save his king and liquidate into an endgame. But the sad part for the Indian ace was that the endgame was a dead lost one. Anand’s two knights and a pawn proved no match to Mamedyarov’s rook and three pawns. Anand resigned on the 51st move.

In the second round, Anand had the black pieces against Anish Giri. And just like at the recently concluded Norway Chess Classic, Anand put his faith in the open variation of the Ruy Lopez to push for a win. Even though Anand was successful in his attempt in Norway against Vachier-Lagrave, it was quite a different case against Giri in Leuven. Anand could have been in deep trouble after his 13th move had Giri found an uncanny knight move on his 14th turn instead of recapturing Anand’s knight straight away. 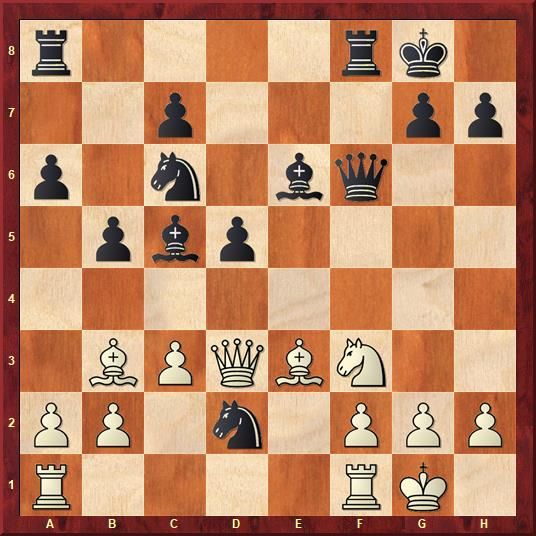 Anand had just captured a knight with 13...Nxd2. Giri recaptured with 14.Qxd2. However, white could have won with the stunning 14.Ng5!! here.

Fortunately for Anand, Giri missed the possibility. After this, Anand immediately liquidated the position even if it came at the cost of a pawn. He had correctly judged that the ensuing heavy piece endgame was a very difficult one to covert for Giri despite his extra pawn. But as the tournament commentator, Jovanka Houska said, “he (Giri) could have fun trying”. And so he did. Soon, Giri’s with his extra pawn, in conjunction with an extra passed pawn that Anand allowed Giri on the queenside, began to dominate the game. And soon the position slipped out of the rapid world champion’s hand.

Having lost both of his first two games, Anand played solidly in the final round of the day against Levon Aronian. But Anand still tried to keep his chances. The game began with a Berlin where Anand decided not to go for the dull endgame that usually leads to drawn positions. Instead, Anand chose a well-known antidote with 7.Bf1.

Anand had a slight edge for most part of the middlegame as well as the endgame but Aronian defended well and did not allow Anand any chances in the two rooks and a bishop endgame. A pair of rooks was swapped by the time the 40th move was reached and the bishops were traded off a few moves later. By this point, Anand barely had any chances to win and peace was signed by the 54th move. 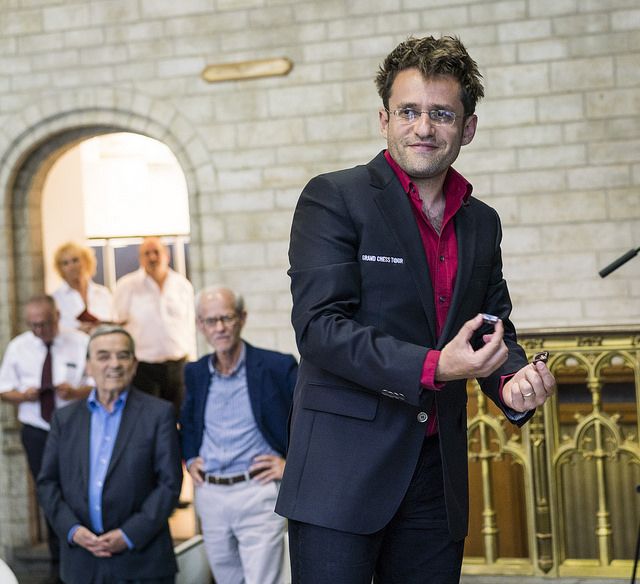 Three rounds into the tournament, things look difficult for Anand given that he is four points behind the leader, Wesley So. But there are six more rounds of rapid chess to be played, not to mention the eighteen rounds of blitz. Anand, therefore, has enough time to recover.