Nihal Sarin is the reigning Asian Continental Blitz champion, he is the top seed and one of the favorites to win the Super Juniors Cup. He is considered one of the best speed chess players in the world. His list of accolades are countless. His first trainer Nirmal EP developed his talent and he still does along with GM Srinath Narayanan. Co-founder of Creative Chess Academy, Nirmal EP is organizing a chess camp from 12th December 2020 to 3rd January 2021. Who can join it? Anyone rated above 1500. Seats are limited to only first 15 participants. In this article we also hear from the man Nirmal himself who shares some valuable insight. Photo: Creative Chess Academy

The year was 2012. EP Nirmal had just won the Kerala State Chess Championship and was invited to CMI Devamatha School in Thrissur to give a simultaneous exhibition and teach a bit of chess to a bunch of kids. Nirmal had been teaching children to play chess for a while now. But he always had one complaint.

“I had noticed while growing up as a player that most coaches would impose their wills on the child’s character and suppress their natural game. They would force the student to follow a set of rules, or force him/her to play in a particular way,” Nirmal used to lament.

So while he walked into the Devamatha school premises, he had modest expectations. He played the kids. He lost one game. Nirmal began to think about the game he had lost and the kid he played against.

Something struck him as odd. The kid’s parents were different too. They seemed honest and sincere, with a genuine interest in letting their kid have fun without really having expectations.

The kid was Nihal Sarin. After years of looking, Nirmal had finally found a protégé with whom he could try something he always wanted to.

“When they are very young, it is the phase where their intuition is developing. A coach must teach the student, but the interference should be minimal. This approach worked with Nihal. My job has been to remove the roadblocks and let him flow.”

Nihal after winning the National Under-9 in 2013 in Chennai

Nirmal says, “The focus has always been on playing. He plays bucket loads of blitz online on various sites. We pay special attention to these games. He plays something, and after the blitz game, I suggest a better or a different idea or a pattern I find from my own work on master games. This ensures that Nihal grabs the meaning of the pattern and remembers it. I just add that particular pattern to something he has just used in a fresh game.”

Nihal and his trainer GM Srinath Narayanan going through the process

Even today, Nihal uses similar methods to learn and improve at chess while he works with his training partners.

Nirmal co-founded Creative Chess Academy along with 2014 National Women’s Challengers Bronze medalist Hinduja Reddy. He uses his principles and methods to teach chess to a new generation of tech-first kids via the Creative Chess Academy. He envisions moulding natural talents and creative insights from a young age. The Academy provides chess training aimed at developing creativity in children.

As part of their program to develop creativity in children via chess, Creative Chess Academy will host a GM Camp by GM Srinath and IM Viani D’Cunha (also a former student of EP Nirmal). 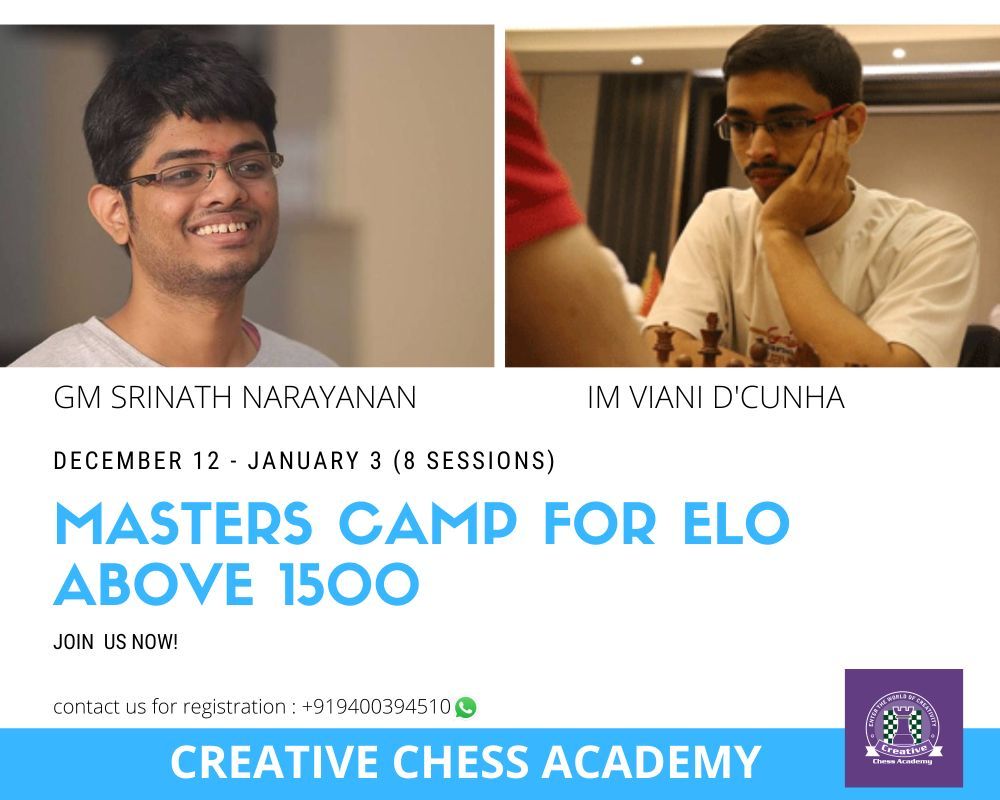 GM Srinath Narayanan, with a rating of 2540, is a three-time Asian junior champion, Indian team Vice-Captain for Olympiad and the current trainer to Nihal Sarin. IM Viani D’Cunha from Karnataka is a recipient of the Ekalavya award. He is rated 2397. He won the bronze medal at the prestigious National Sub-Junior Championship in 2010.

• The maximum number of students in the camp will be 15. The camp is open for players rated 1500 and above. The spots will be allotted on first come first serve basis.

All students who would like to participate and have any questions can contact Creative Chess Academy at:

What is the best way to know more about Creative Chess Academy than to hear from the co-founder Nirmal EP himself? We decided to interview the man who developed Nihal Sarin's talent - Nirmal EP.

Shahid Ahmed (SA): We have learnt before that you worked on a department that Nihal wanted to work on a particular day according to his mood, do you think this is the best way to teach children individually?

Nirmal EP (NEP): Depends. You should observe a child and find out what suits him/her.

SA: Tell us about 'The Nihal Sarin way'.

NEP: It is very difficult to put it into words. It happened accidentally or magically. Initially, when I started training Nihal I tried to teach him lessons from a book or something like that. But he was not cooperating. Since I have already read books of Osho and Krishnamurti in which they give a lot of emphasis on allowing children to progress naturally, I changed my approach. So, rather than imposing my things on him, I went by his feel... One key part here is ‘active listening’. When you listen to the child empathically there starts a process in which the child ‘reinvents itself’ or recalls his ‘forgotten self’. It works well only if the parents are not greedy about success and don’t interfere.

SA: You have mentioned before that 'interference' should be minimal of a coach to a player. Since there is so much chess material available for one to learn, do you think this still works?

NEP: It can still work. But, now coaches and parents are faced with new challenges. Conventional chess coaching revolves around giving more information to chess pupils. They already have far too much of it ― in form of books, and databases filled with millions of games. So, perhaps, we should try to embed in children the ability to make sense of information, to tell the difference between what is important and what is unimportant, and, above all, to combine many bits of information into a broad picture of the overall game. Perhaps we should enable the child to understand what is happening around him/her and navigate the maze of information.

SA: Do you think children should be allowed to play more instead of encumbering with a lot of theoretical knowledge?

NEP: Yes. Parents should find spaces where children can play with other players over the board. If there are not such places, in my opinion, parents should invest money to create such places. Playing on the internet with an upper limit to the number of hours the child spends on the computer is also a viable option.

SA: When did you realize Nihal has something special in him?

NEP: I strongly believe in the concept of ‘Indigo children’. And, I also believe that Nihal is an ‘Indigo child’. It was apparent first itself. But then since progress depends on many other things, it was difficult to predict anything.

SA: What are your thoughts on Nihal becoming one of the best in the world?

NEP: It depends on many things. Maybe it is going to happen.

SA: What would you say has worked for Nihal among your methods and why?

NEP: a. Non-interfering but at the same time highly committed parents.

b. A personal space in which the student is allowed to be himself.

c. Association with a player (myself in this case) who is a co-traveller rather than a coach.

SA: How much do you think parents' support plays a key role in a child's success?

NEP: Really big. Parents should arrange things like books, softwares... etc. for their children without putting pressure on the children. They should support their child to pursue the activities which the child likes the most.

More than anything else, parents should create an ambience in their homes which is conducive for the growth of children. For creating such an ambience meditation would be an ideal option.

SA: What would be your advice to all talented players who are looking for a breakthrough and their parents?

SA: Thank you very much for taking the time to answer these. I wish you the best in your future endeavors.

NEP: Thank you too for giving me an opportunity to express my views. And also for doing so much for Indian chess.