At the age of six, kids find it tough to accomplish the banal day to day tasks of life - like eating food without spilling it, tying your shoe laces, or getting dressed on your own! But here we have S. Lakshana, a six-year-old prodigy from Sivaganga district near Madhurai. She recently won the World Schools Championship in the under-7 girls section. IM Sagar Shah looked closely at two of her games and he was greatly impressed. At the age of six Lakshana is showing skills which players much above her age find it hard to grasp! We assure you that you are going to hear her name a lot in future, and hence we acquaint you with this phenomenal talent in this article.

Amruta Mokal was strolling around the venue of the Chennai Open 2018. Holding her camera in one hand, she looked around for something interesting that she could capture. Suddenly her attention was drawn towards 3-4 very young kids running around and making a lot of noise! She went up to them and asked the smallest looking one, "What happened in your game?" "I lost", she replied and started playing again! Amruta did ask this 6-year-old about her game and what moves she made. When she came back to me she said, "Sagar, you have to interview this girl. I think she is going to be something special." I asked Amruta about the little girl's score. "It's not about the score! It's just the way she speaks!" I did not argue further and I decided to interview her after the Chennai Open ended.

Although the girl was cute, I had absolutely no idea why I had done the interview. Majorly I just didn't want to say no to Amruta! But Amruta's intuition didn't fail her! Just three days after the interview we got the news that Lakshana had won the National Schools under-7 section held in Bhubaneshwar. That's when I tuned into the video to hear what the 6-year-old, born in 2011, had to say!

Lakshana comes from a town called Karaikudi which is 80 kilometres from Madurai.

Talent can sprout from just about anywhere!

Thanks to winning the National Schools under-7 Lakshana qualified for the World Schools 2018. In the under-7 section you don't really know what to expect. The players are not rated, they have no fear, they can get bored anytime, and they can even produce some gems! So, when Lakshana went to Albania for the World Schools 2018 no one knew what would happen. But being the national schools champion, she definitely had a good chance.

Things didn't start so well for Lakshana. She lost to a fellow India Anaishaa Nahar in the very first round. 0.0/1 might seem depressing, but for a little girl who is just six it didn't matter. Lakshana went to the board on the following days and started winning one game after another. Before you knew it, she had won all her games and ended the tournament with 8.0/9! 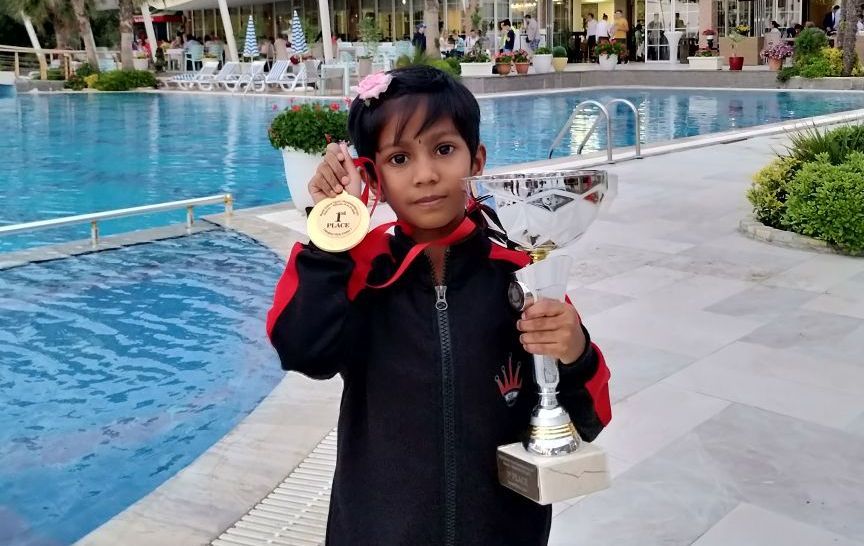 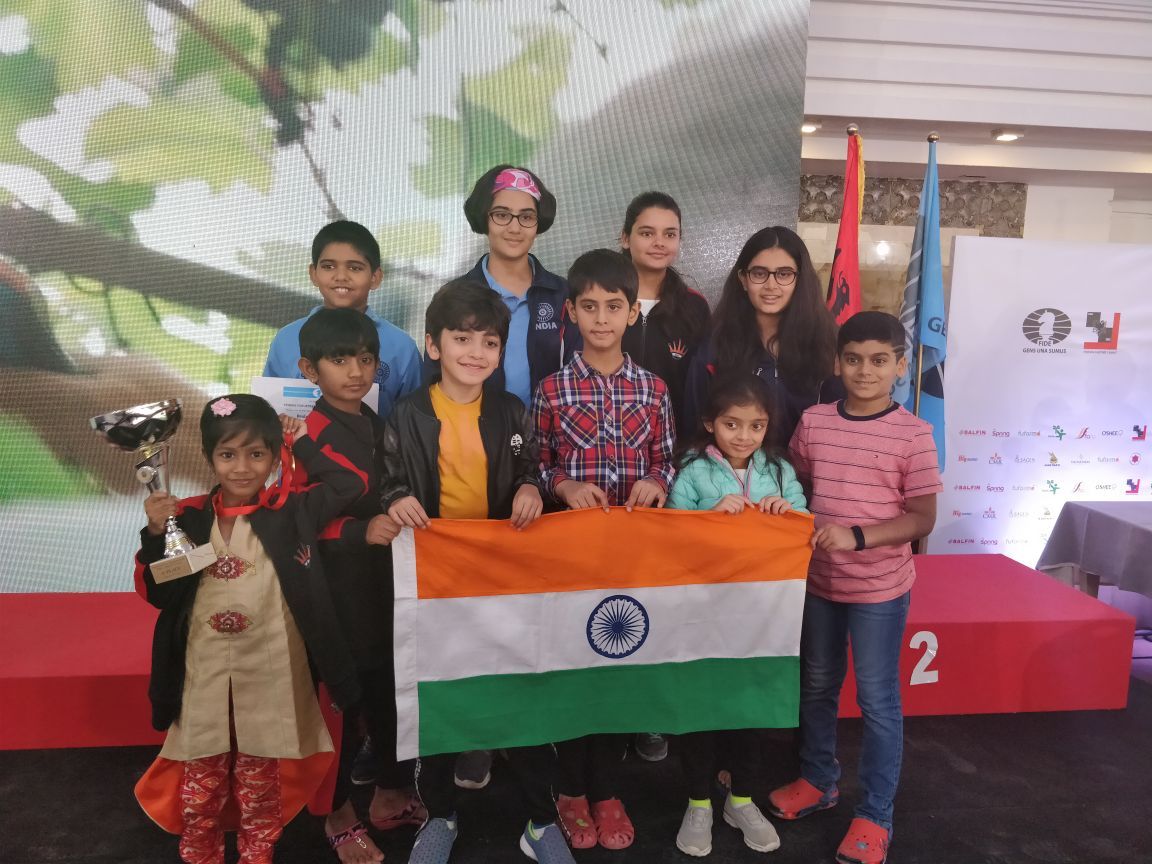 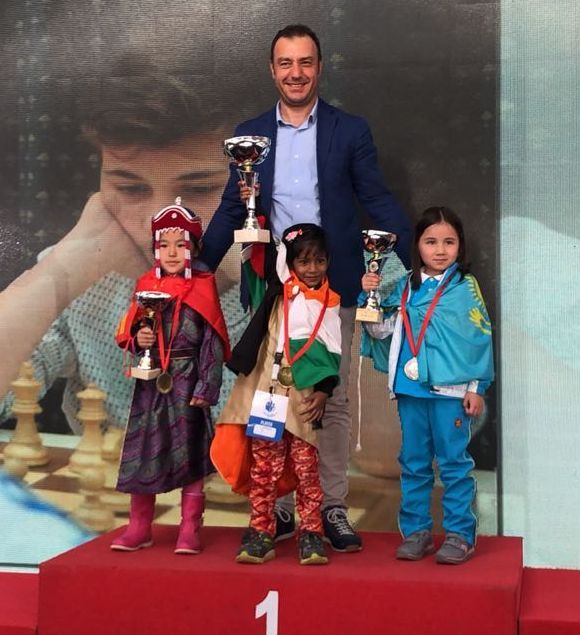 Holding that trophy as high as she can!
Lakshana winning the gold medal captured by Chessmom Rekha Nahar 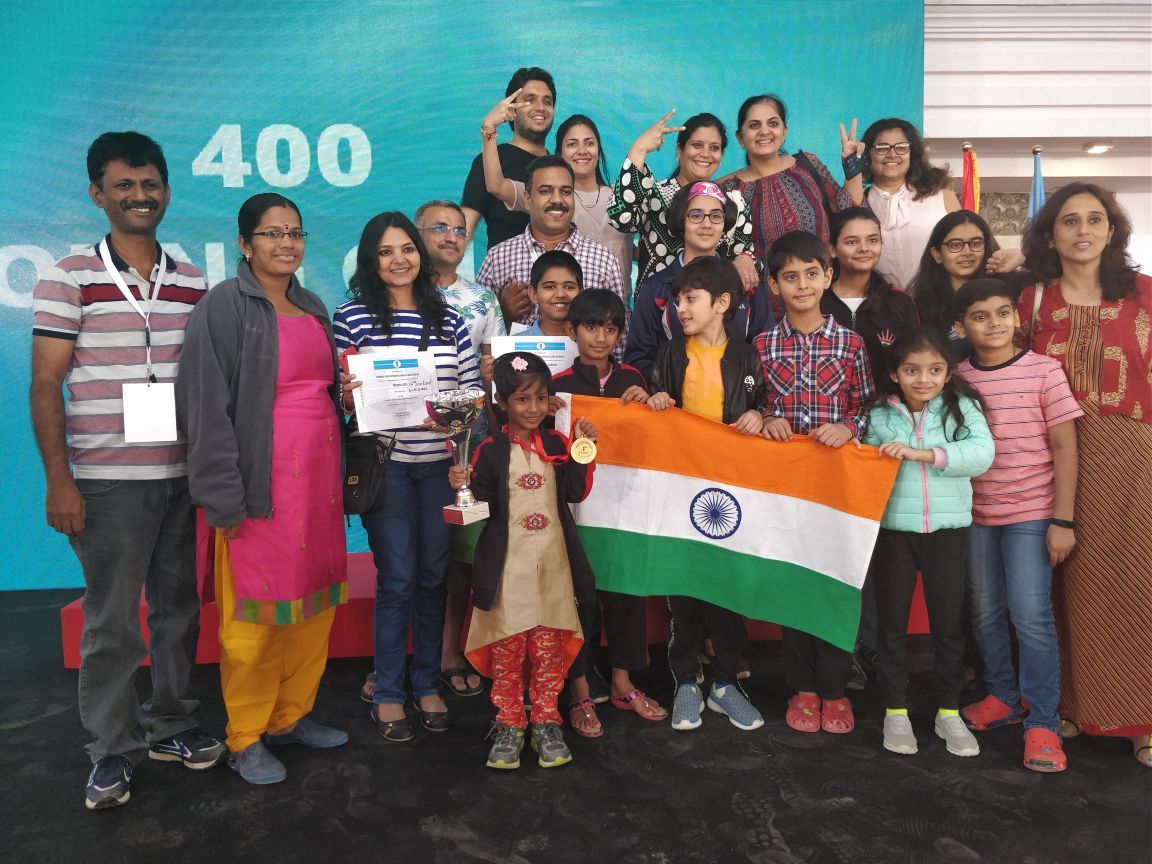 Thanks to Lakshana the entire Indian squad is going back with a smile on their face! 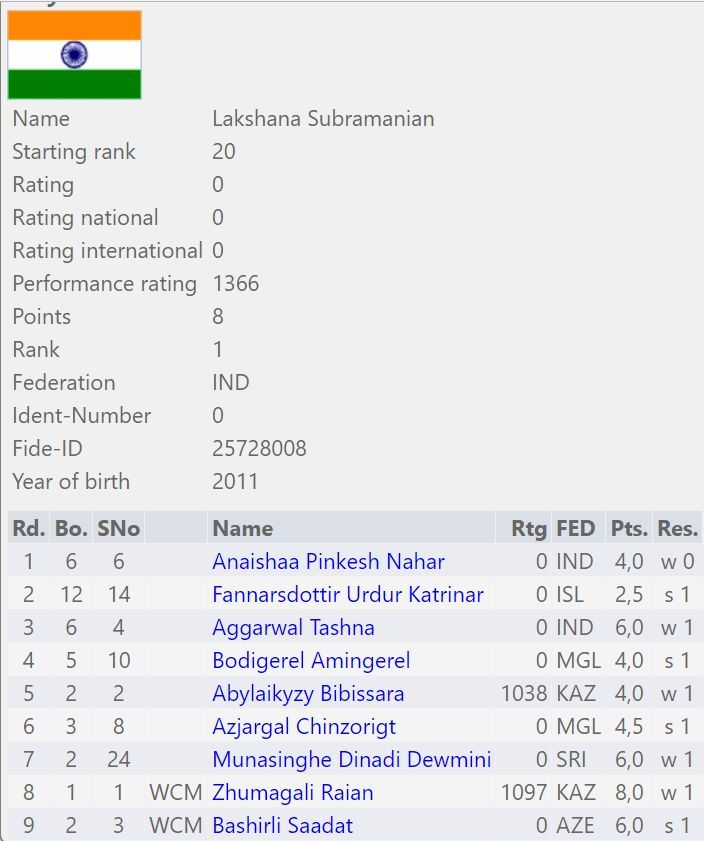 Lakshana's performance at the World Schools 2018 under-7
A huge thanks to Nandita Kanyamarala from Any Time Chess for this interview of Lakshana after round seven. Look at how quickly she narrates her moves!

I annotated two of Lakshana games from the event just to get a feel of her playing strength:

In this game (below) against the Indian player Tashna, Lakshana shows the importance of not wasting any move in the opening. On each and every move, she is seen developing her pieces!

In the next game, Lakshana sacrifices (maybe overlooks) a pawn in the opening and then goes on to show some excellent dynamic chess. She has a very good feel for compensation, and once she got a positional advantage, she just didn't let her advantage go!

We must remember while seeing the above two games, that it was played by a 6-year-old girl! Six years is currently an ideal age to start learning the game of chess. However, Lakshana has already walked many a miles along that path!

Of course, it was a moment of joy and pride for Mr. Subramanian (father of Lakshana). Both of his daughters did exceedingly well at the World School Championships. While Lakshana won the gold, Indira Priyadharshini finished eighth in the under-9 section. After the victory, he wrote a letter to TNSCA and AICF sharing his joy and thanking the officials for the great job that they are doing for chess. We reproduce it here:

I am happy to inform you that My 6 year old daughter Ms S.Lakshana (Fide id 25728008), student of Chettinad Pubic school, Managiri, Karaikudi Sivaganga dist, has won Gold medal in the WORLD SCHOOL CHESS CHAMPIONSHIP held at Durres, Albania, Europe from 20th to 29th April 2018 , conducted by Albania chess Federation under the auspices of the World Chess Federation (FIDE).

She won this gold medal in Under 7 girls category, thereby may get a title of “Women Candidate master". She is the lone medal winner from India in this chess tournament. Totally 387 players from 40 countries participated in this World championship tournament, conducted for six categories of boys and girls each. Out of the total 12 Gold medals, our Lakshana secured the one in under 7 girls by scoring 8 points out of 9 rounds.

Her sister, Ms S. Indira Priyadharshini, studying IV std in the same school, also participated in this Chess tournament secured eighth position in under – 9 girls category. Both were coached by Mr. S. Athulan and trained by Mr. Sa.Kannan of Karaikudi. I wish to convey my sincere gratitude to TNSCA/AICF officials for your blessings and continuous support in this regard.

Lakshana is currently being trained by the experienced chess coach from Karaikudi S. Athulan. She is also coached by Sa Kannan, who is a strong chess player rated 1968. Athulan has developed many strong players over the years. Starting from Poobesh Anand, WIM M. Kasturi, Mahima Rajmohan to the recent talents M. Pranesh, S. Rohit. Even Sa Kannan is one of Athulan's students. Being in such capable hands it seems very likely that we will be hearing Lakshana's name quite often. When asked about Lakshana special qualities, coach Sa Kannan did mention, "I don't think anything makes her 'special'. Only hard work did. Few positive traits I have noticed in her are focus, determination and love to 'play' chess."

As of now, I am excited to see how the six-year-old fares at the under-11 nationals which will be held in her school - Chettinad Public School. Battling against girls nearly twice her age from 28th of July in her own school, Lakshana will definitely be the center of attraction.

Performance of other Indian players:

Thanks to the Kanyamarala family who provided regular information from Albania, we were able to cover the tournament on ChessBase India. Our special thanks to Rekha Nahar as well for sending us some very nice pictures and videos.