India's 19th Grandmaster Sundararajan Kidambi writes on Karthikeyan Murali's latest incredible Queen Sacrifice against Alireza Firouzja in round 5 of the ongoing Asian Continental 2019. Kidambi wrote a post on his blog after more than a year. We all are aware of Kidambi's impeccable knowledge of the game and how meticulous he is with his analysis. In this article, he discusses the game with incredible details, his observation on key elements in an early Queen Sacrifices. He also shares past instances where similar things have happened. He makes the readers think and study the past games by sharing similar Queen sacrifices. Photo: ChessBase India archive/Shahid Ahmed

"For it is in giving that we receive" - St.Francis of Assisi

Right from the times of Greco until the current day, the idea of sacrifices in chess has appealed to both amateurs and professionals alike. Masters of the yesteryear valued the spirit of chivalry very highly and would even stake their quest for victory in order to create artistic beauty. Perhaps, things have changed a little bit nowadays with the advent of better defense aided with advent of powerful chess engines refuting (in theory) daring and beautiful attacks through cold blooded defense (though, I have to admit, who knows how Alpha Zero has changed even the perception of the engines!) Nevertheless I know that all of the players aspire to create a lasting masterpiece over the board. If sacrifices appeal to the artistic side of a chess player what can be a better way than to sacrifice the most powerful of all pieces - the Queen?

While observing the games from the ongoing Asian Continental Chess Championship at China, the following position from the first board duel between two talented youngsters caught my eye. 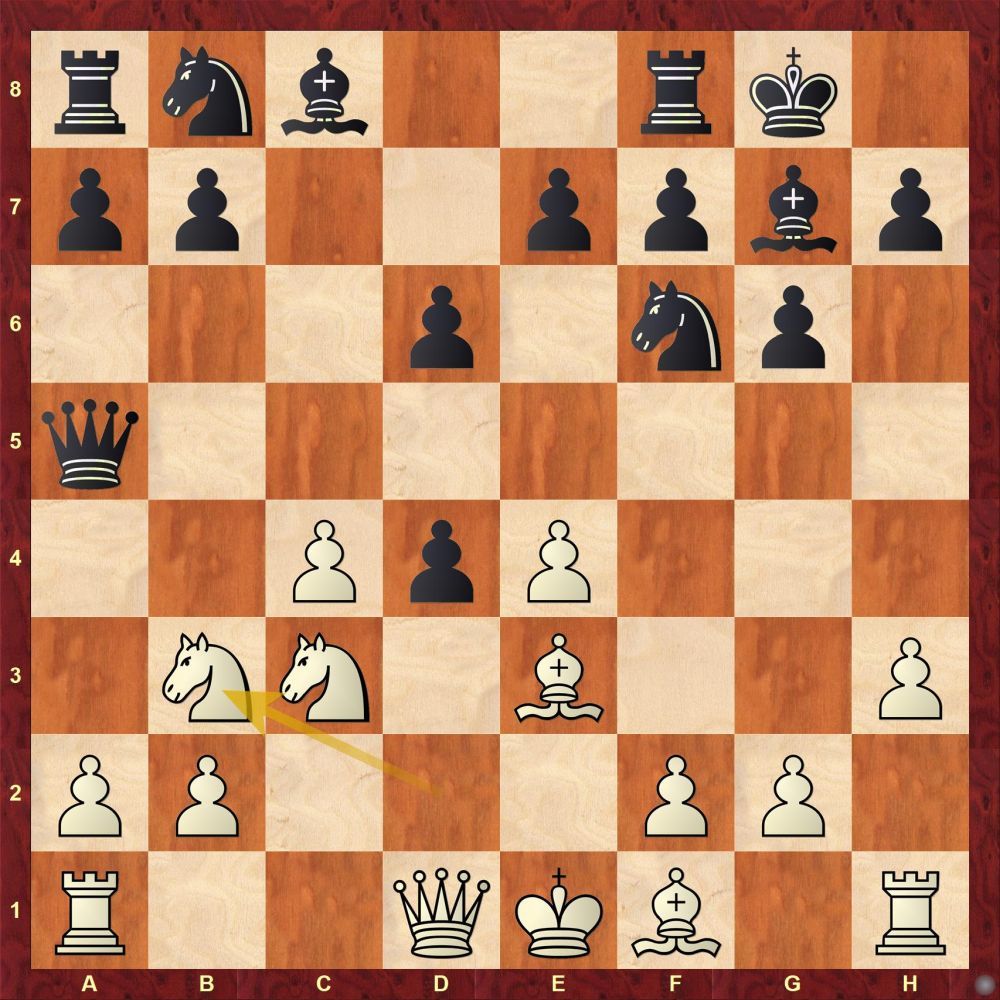 Here, after 21 minutes of thought former National Champion Karthikeyan came up 9...Qxc3!! From the time spent I infer that it was purely an improvisation over the board than a result of detailed home preparation (which makes it even more impressive!) The sacrifice is purely positional one and there are no forced lines leading to clear assessments in the near vicinity. I do not (or even want to!) know whether the sacrifice is objectively the best continuation and so on. But things are clear that as a practical player the opponent is in for a big shock when you sacrifice your queen this early in the game for 2 minor pieces. There can also be thoughts such as "I need to refute this impudent sacrifice etc." which can be counterproductive to a calm thought process. So all in all a brilliant psychological master stroke, but things do not end there! Thinking purely in chess terms also I like the fact that Black gets 2 minor pieces and a pawn for the sacrificed Queen and apart from that wrecks white's pawn structure a little bit and gains good sole control of dark squares of the board. But all said and done, a Queen is still a Queen and it still requires great guts and imagination to sacrifice it! 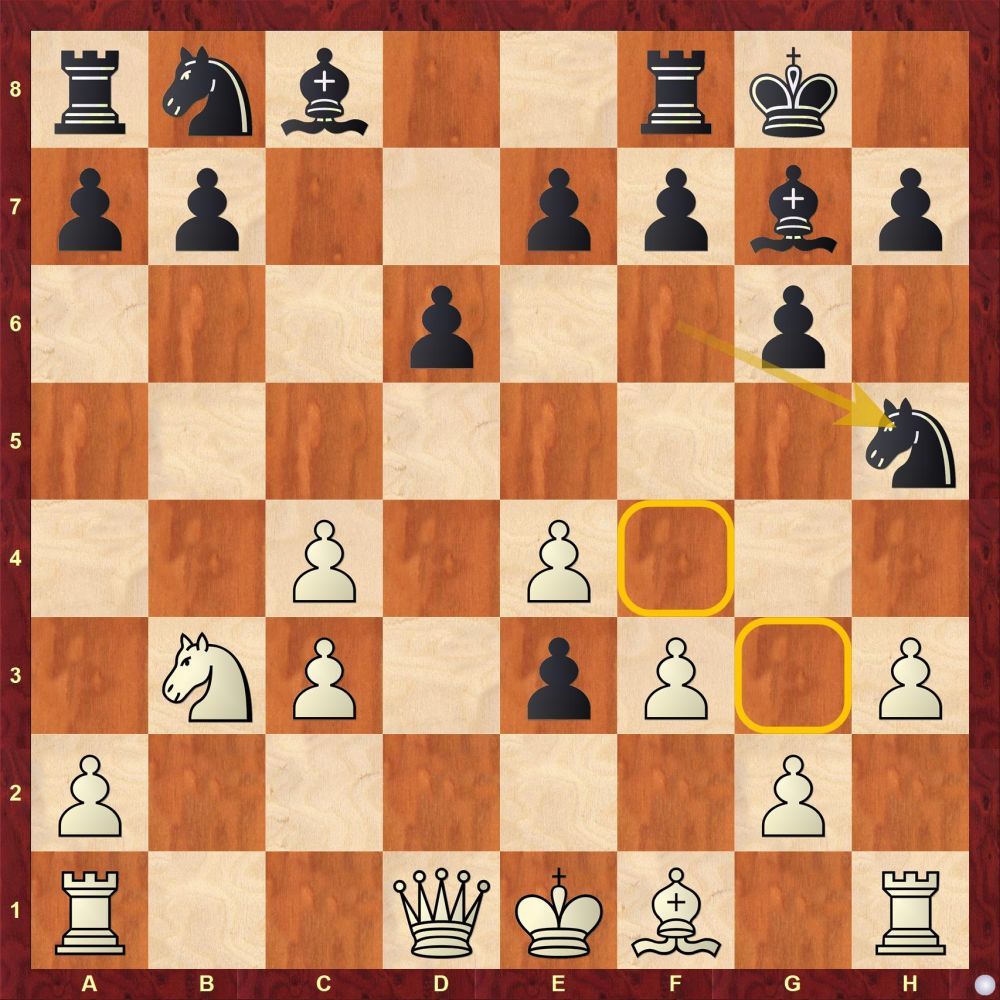 Note the position of the pawn on h3 which weakens the g3 square and also indirectly the f4-square. If the pawn were on h2 White could have retained a good chance of control of central dark squares with an eventual g2-g3 and f3-f4. But black obviously was attentive to this little detail! Moving on, we come to the position after Black's 16th move ...Bf4

Clearly things have become a whole lot brighter from Black's perspective. He is completely dominating the central and king-side dark squares, thanks to the absence of White's minor pieces which could have controlled them. White's King is rather shaky in trying to find a permanent shelter, while White's pawns especially the backward doubled pawns on the semi open c-file are inviting targets for Blacks pieces. Black has no targets/weaknesses to offer White's major pieces. Black's coordination among all his pieces is nothing short of remarkable!

Let us move in to the position after move 27 by Black : 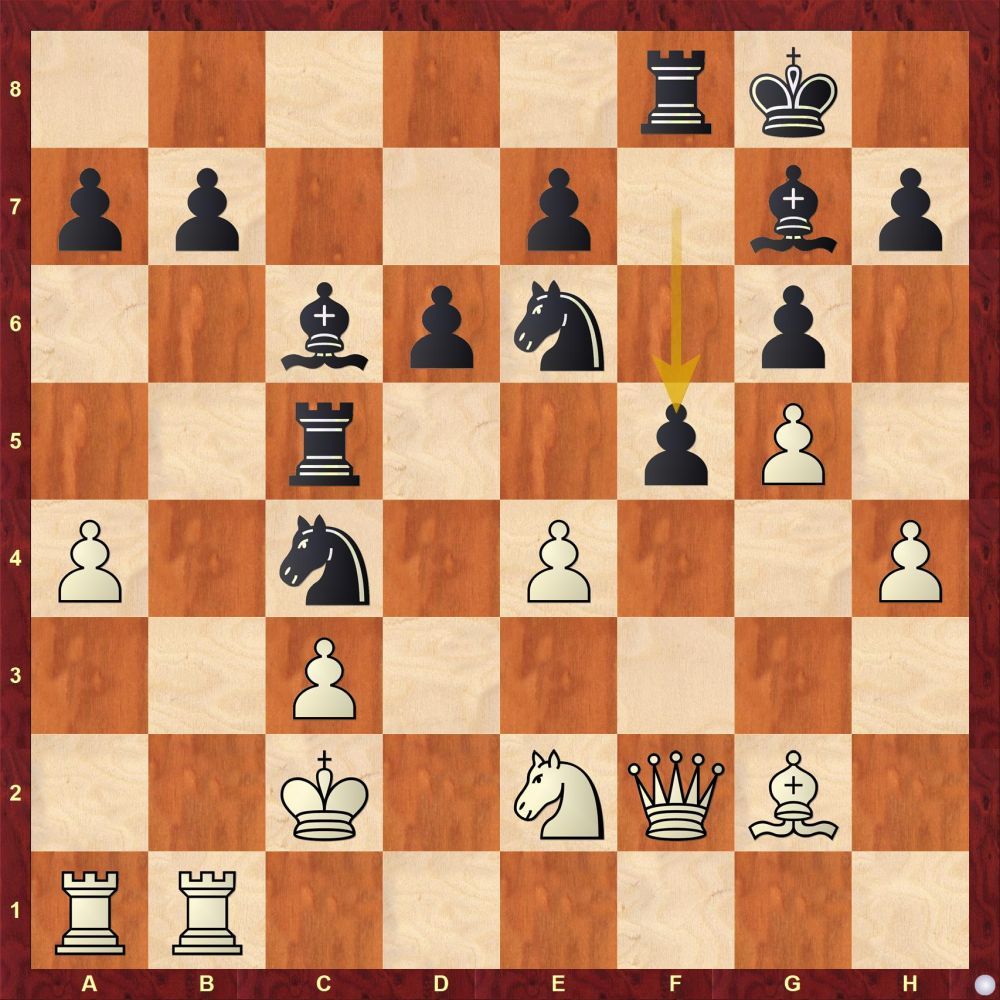 Each one of Black's pieces are a symbol of efficiency. With 27...f5  Black brings in the last dormant rook on f8 into the game and crashes through White's defenses. I will conclude this game with 2 more diagrams. 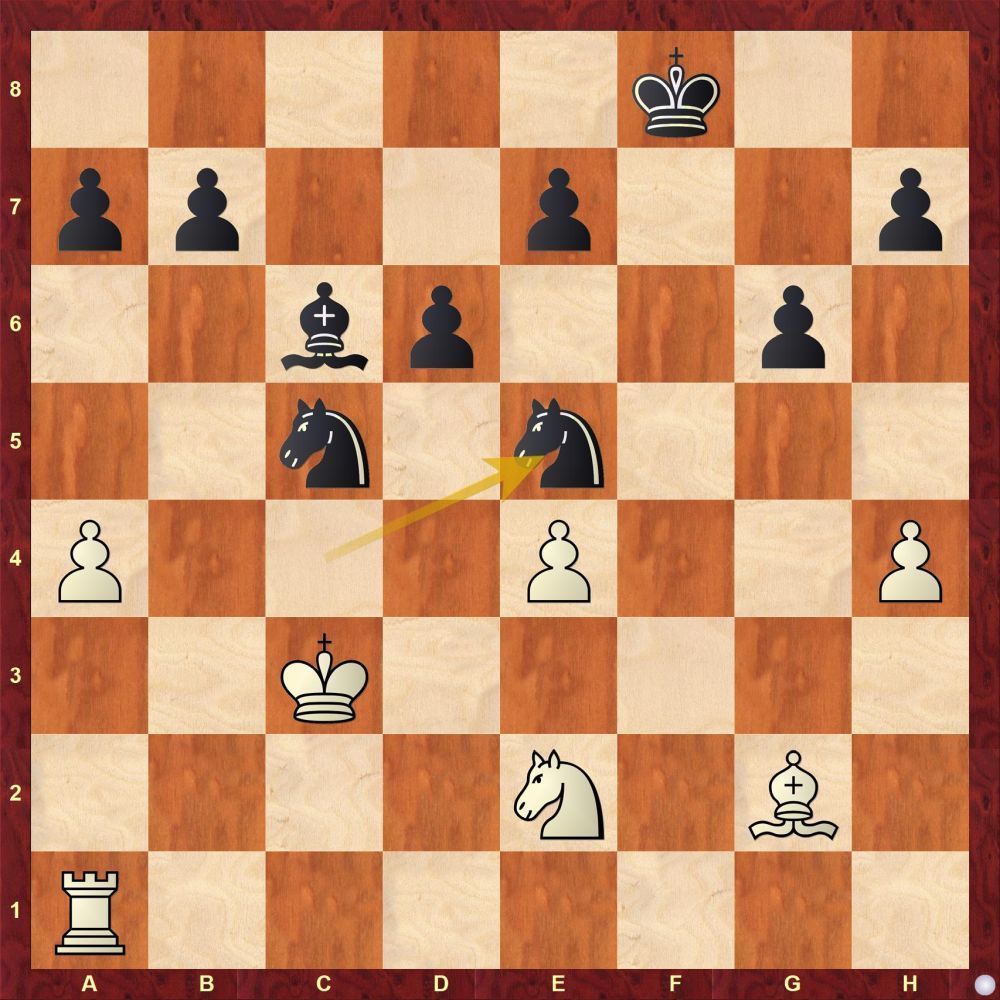 This position after Black's 32nd move is reminiscent of end games from a Sicilian Dragon where Black mops up all White's pawns though he is an exchange down. 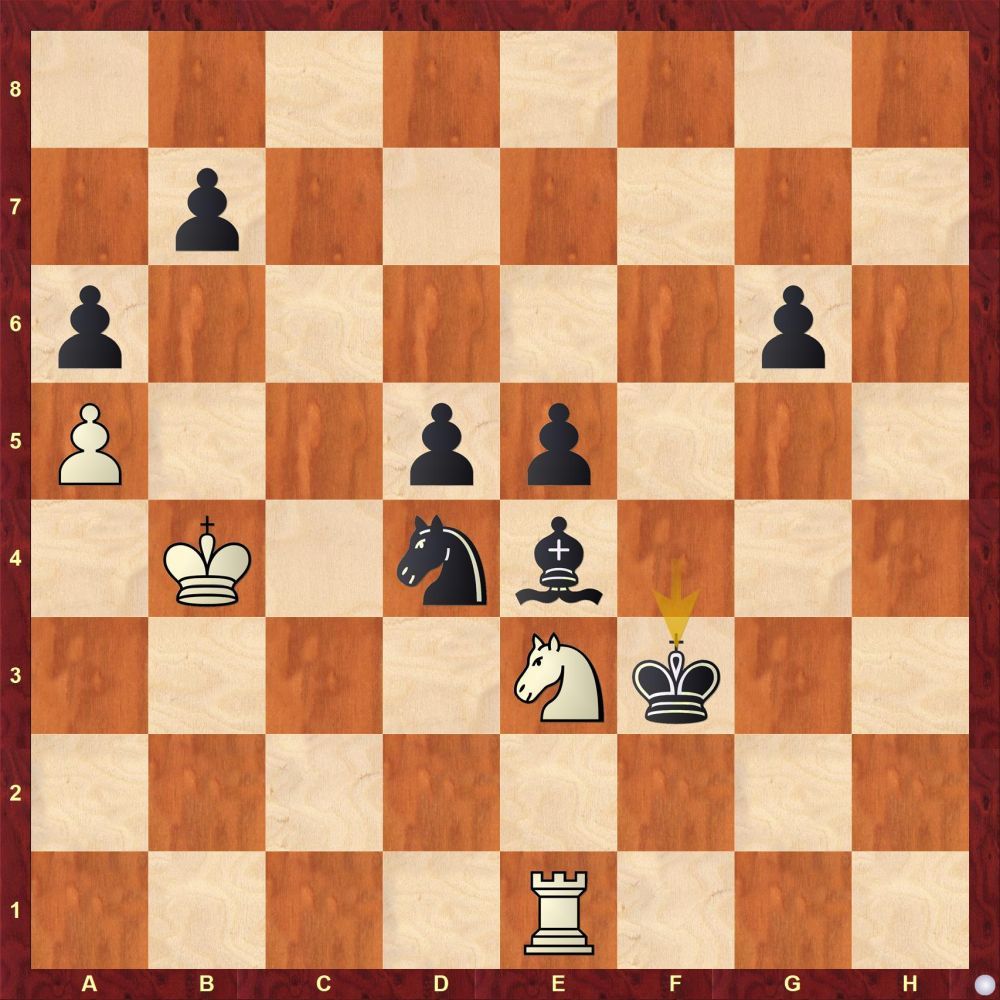 The final position after move 52...Kf3 whereupon White resigned is a picture of pure domination!Given below is the full game replayable with my comments:

While looking at the above game the famous game Spassky-Bronstein Amsterdam Candidates 1956 obviously came to my mind. I will share some interesting moments from the classic game. 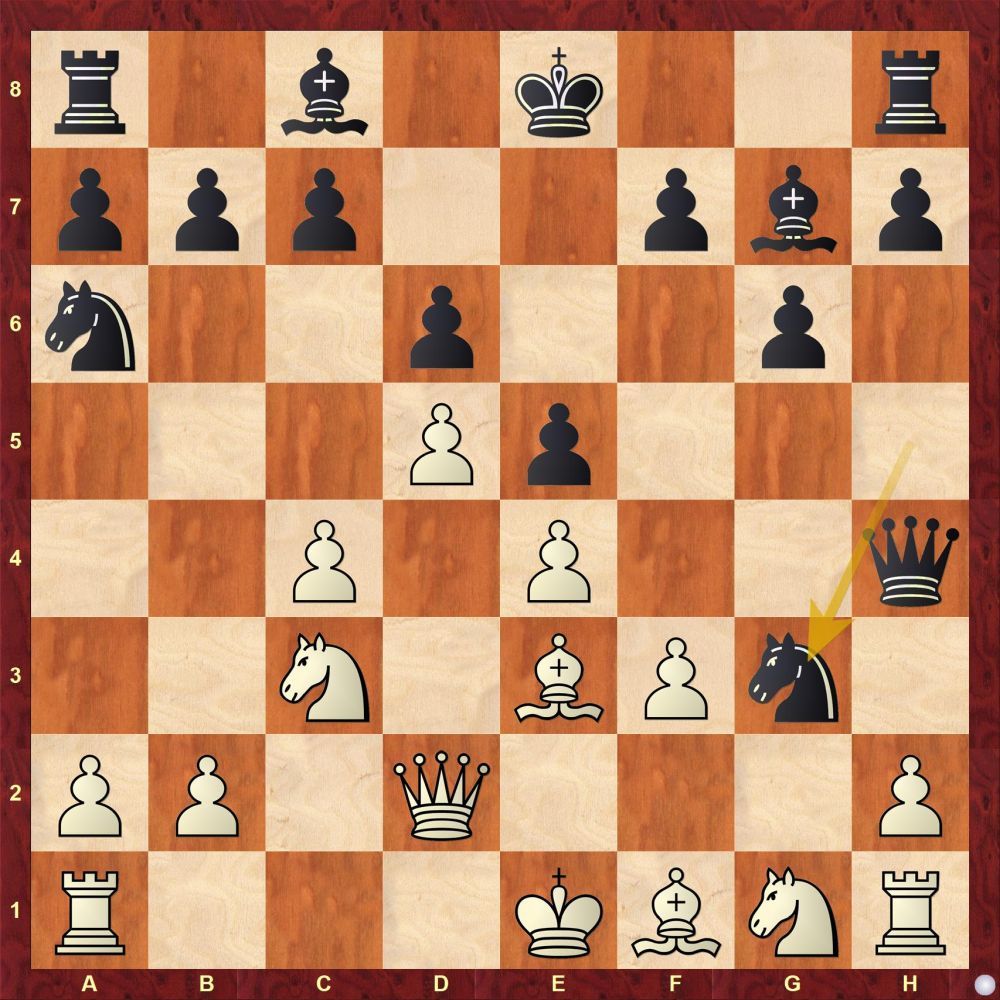 Bronstein played 9....Nxg3 here inviting 10.Qf2 to which he had prepared the response. 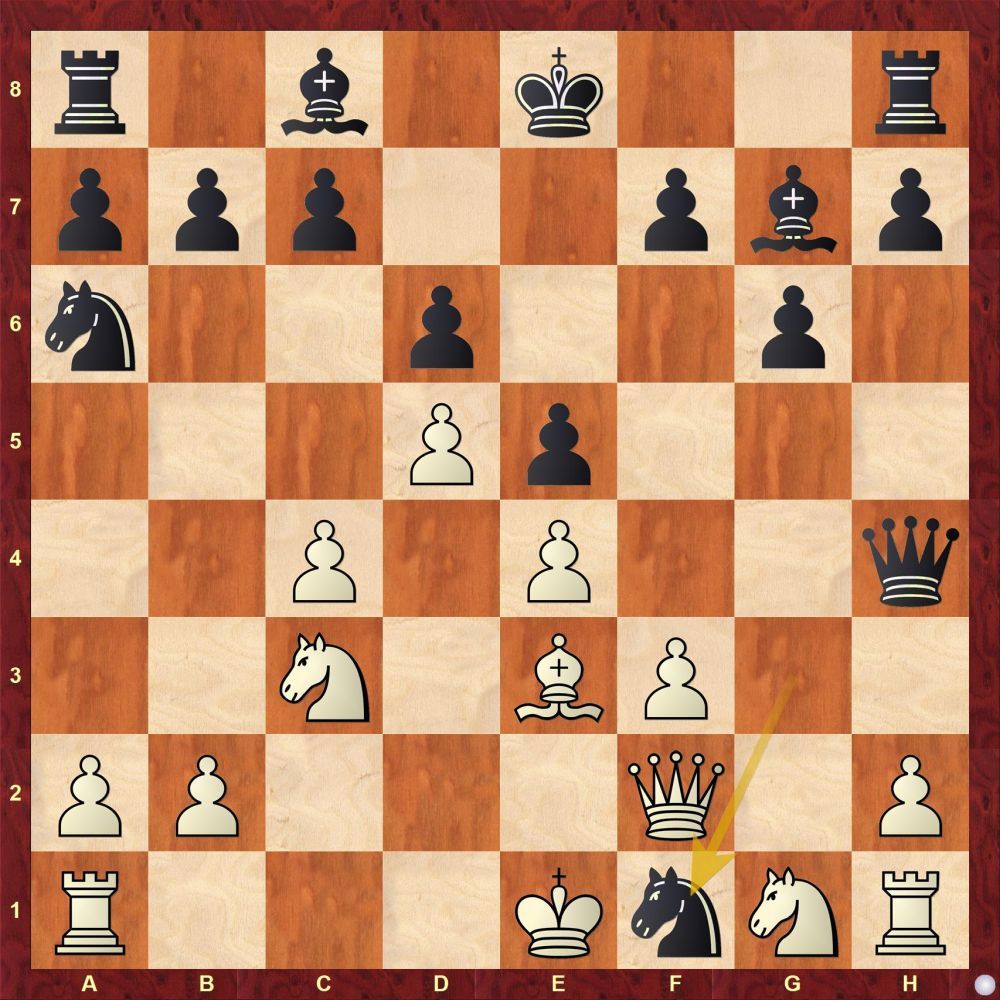 10......Nxf1 sacrificing his Queen for two minor pieces and a couple of pawns just like how it happened in the Alireza-Karthikeyan game. 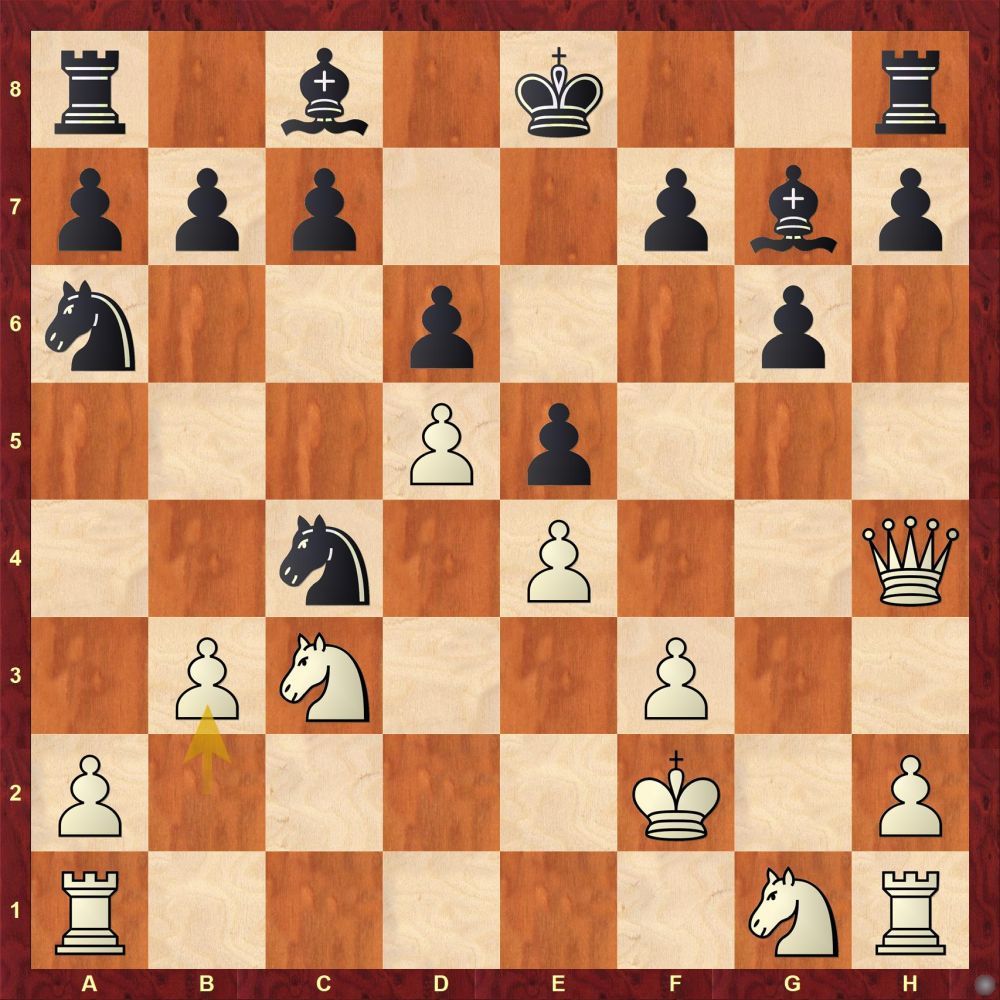 Moving forward we reach the position after White's 13th move 13.b3. Here according to Bronstein it was possible to play the active 13....Na3!? with a later ...Nb4 in mind. Instead he chose to play 13....Nb6 and the game went on. The next interesting moment comes after White's 20th move exf5 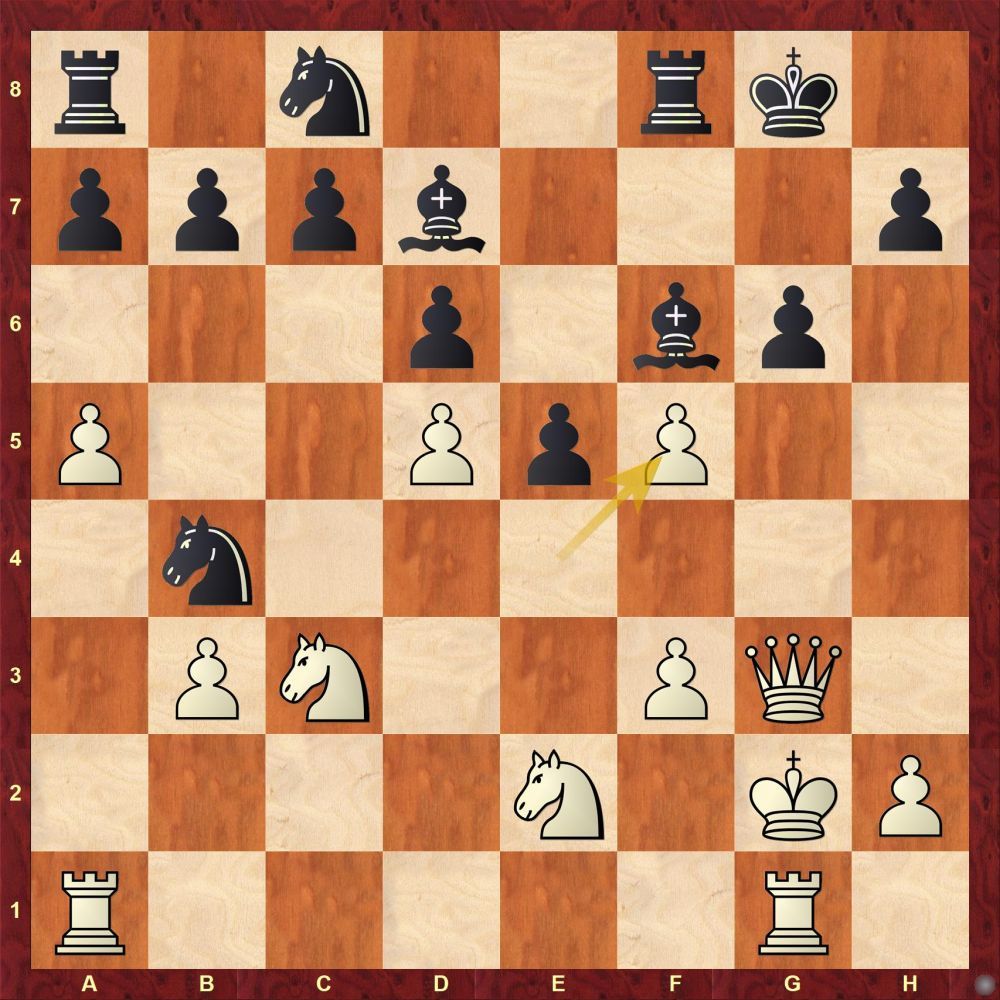 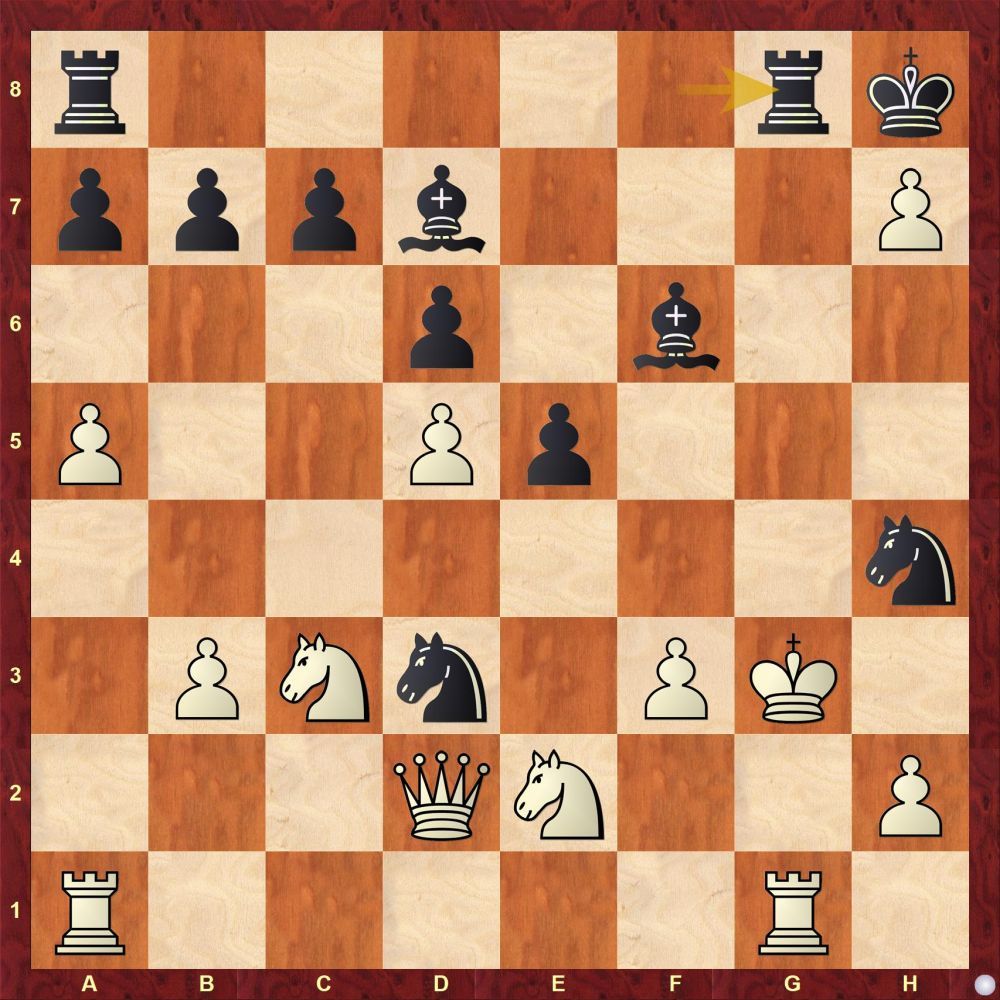 Instead Bronstein chose to play 20....Bf5 which led to the sly response 21.Ra4! from Spassky which as Bronstein admits he had evidently overlooked. The game was a big slugfest after that but Spassky nursed home his material advantage in exemplary fashion.You can check the full game with Bronstein's comments from his book Sorcerers Apprentice co authored with Tom Furstenberg in the replayable board below. 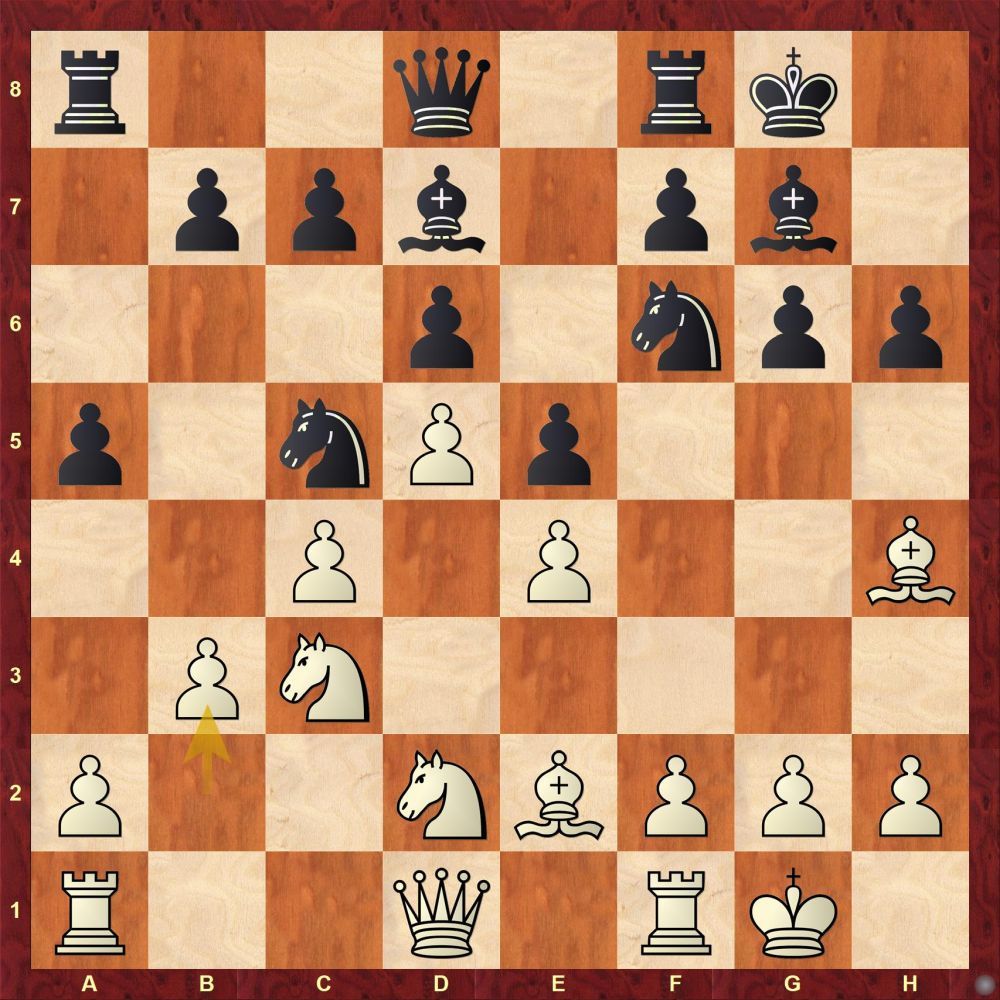 This is a position from the blitz game between Kramnik and Kasparov from 1994, as you would have already guessed, Black chose 12....Nfxe4! sacrificing the Queen for 2 minor pieces and a pawn. Despite being a blitz game it illustrates the point well and is quite similiar in spirit to the other two games examined here. For the continuation and the full game find the board viewer below:

My observation from these three games are as follows:

1. The side sacrificing the Queen maintains a very clean pawn structure.

2. The minor pieces co-ordinate well with the pawns as well as remaining major pieces on the board.

4.The Queen, though a very good attacking piece is by far a poor defensive piece. This is even more pronounced when dealing with pieces of lesser value (especially the minor pieces).

To conclude, I would like to congratulate Karthi for taking such a pretty decision and etching his name in history along with the other giants!  I also feel that I have barely scratched the surface of a fascinating topic - namely Positional Queen Sacrifices. Interested readers can turn their attention towards Spielmann's Art of Sacrifice in Chess and Suba's Positional Chess Sacrifices.

As an additional study material I would also refer the readers to check the following games. Happy Explorations! 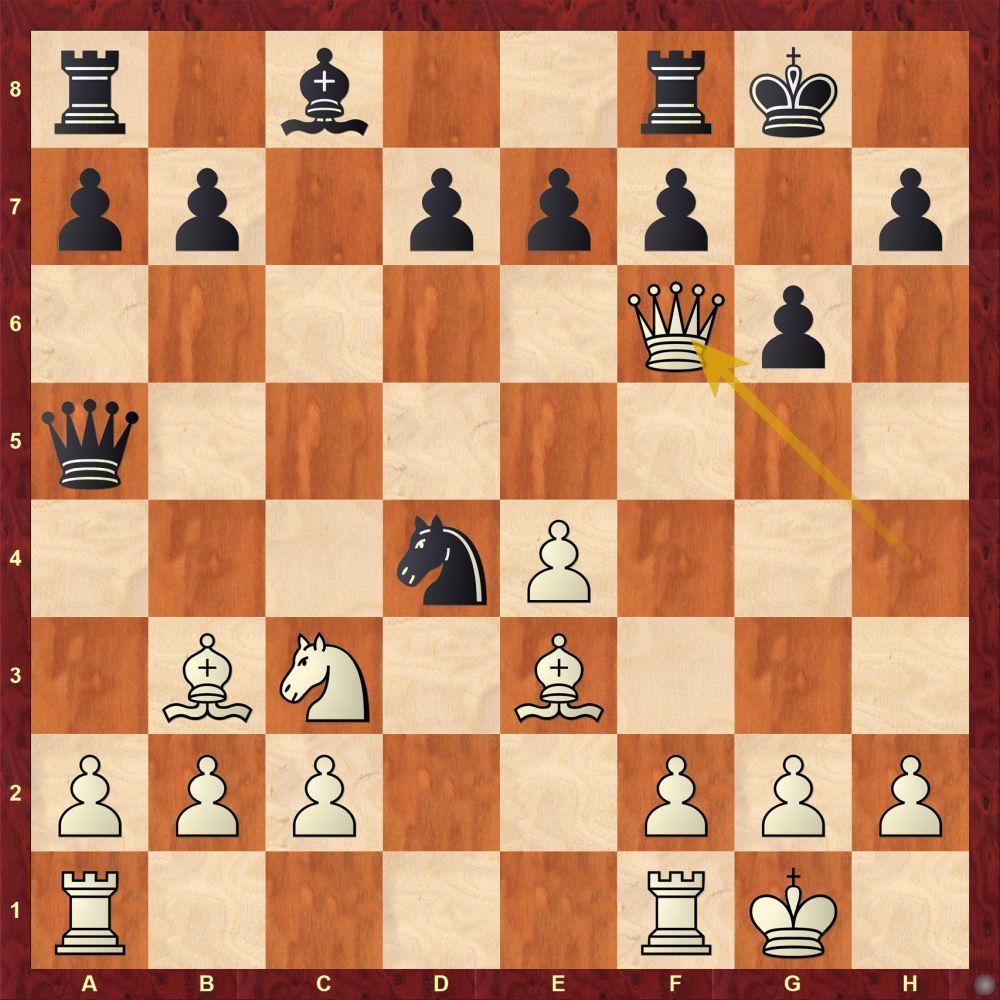 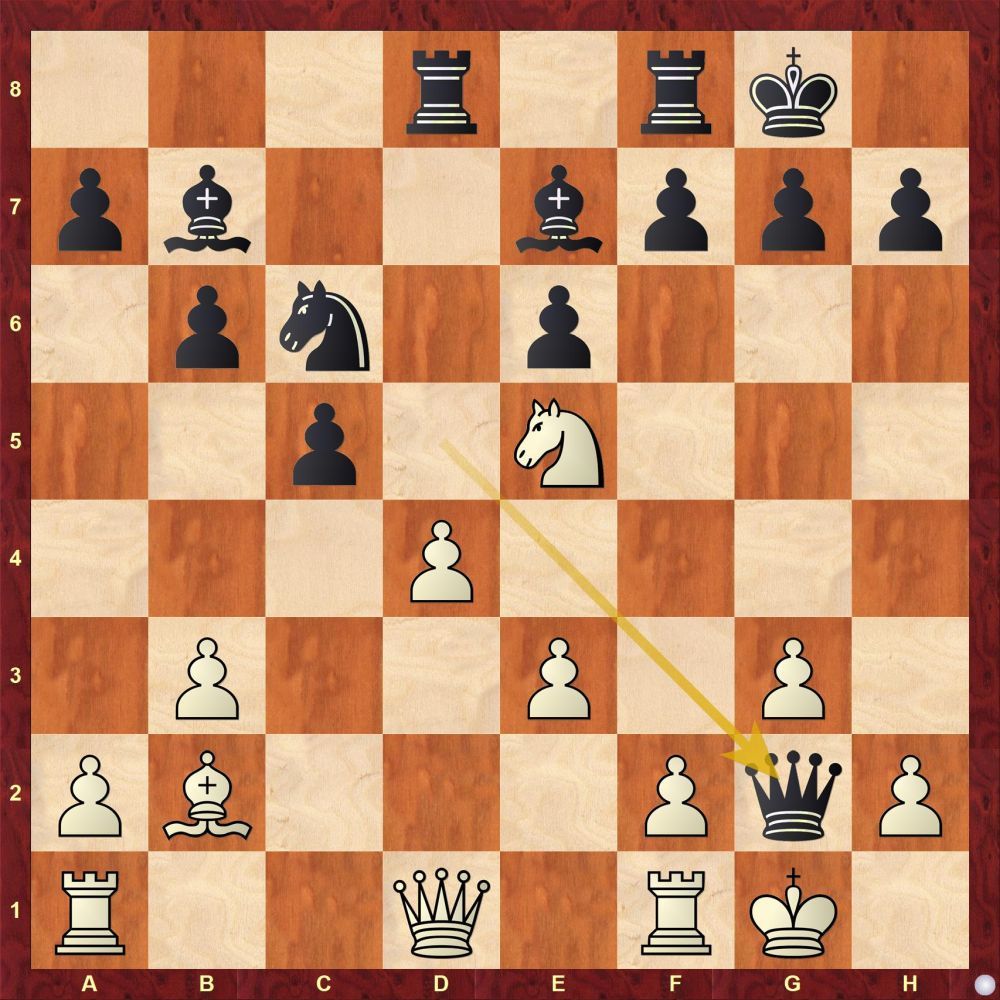 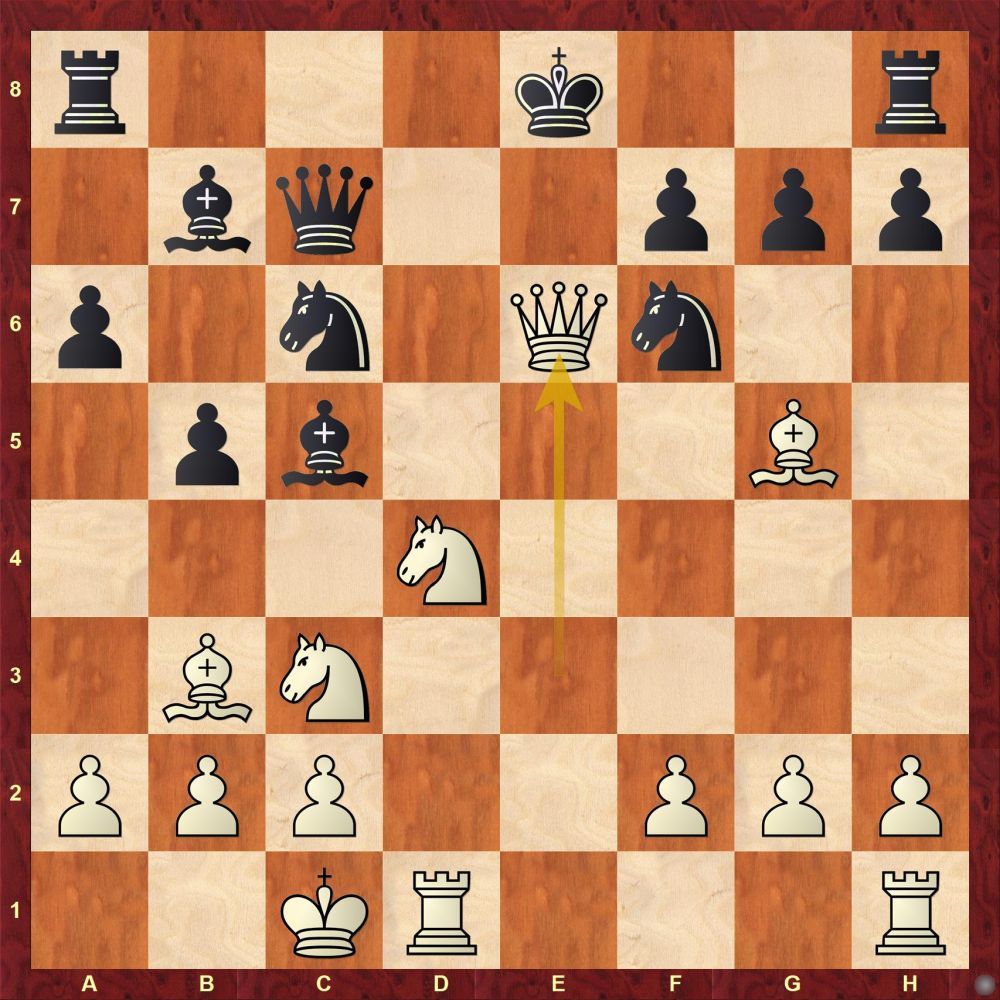 GM Sundararajan Kidambi is considered by many Indian players as the one with impeccable knowledge of chess classics | Photo: ChessBase India archives

ChessBase India is happy to see GM Sundararajan Kidambi reviving his blog "Musings on Chess". Knowing what an encyclopedic knowledge the grandmaster from Chennai possesses, I think we are in for a treat! One can only hope that Kidambi keeps writing regularly! We will keep reminding him about it!