The KIIT chess festival concluded a couple of days ago. In the main event, 19-year-old International Master Karthik Venkatraman stunned players and spectators alike and won the event with an unbeaten 9.0/10. In his run, he defeated four GMs in the last four rounds that included the fourth-seeded GM Sandipan Chanda as well as the top seed of the tournament Martyn Kravstiv. Rated a modest 2457, Venkatraman finished with a mindboggling performance of 2740 to earn a GM norm and 34 Elo points along with his title prize.

The KIIT Chess Festival was organized from May 25 to June 1, 2018, at the KIIT Campus in Bhubaneshwar Orissa. The focal point of the event i.e. the Grandmaster Open attracted a total of almost 300 participants which included 19 Grandmasters and 23 International Masters. The time control for the event was 2 hours for the entire game with a 30-second increment from the first move.

After the scheduled 10 rounds, the event was surprisingly won by the 19th seed of the tournament, IM Karthik Venkatraman. Venkatraman finished with a score of 9.0/10, a full point ahead of the top three seeds, Martyn Kravstiv, Farrukh Amonatov and Ivan Rozum who all finished with 8.0/10. After tie-breaks were applied, Rozum was declared second, Amonatov third and Kravstiv fourth. 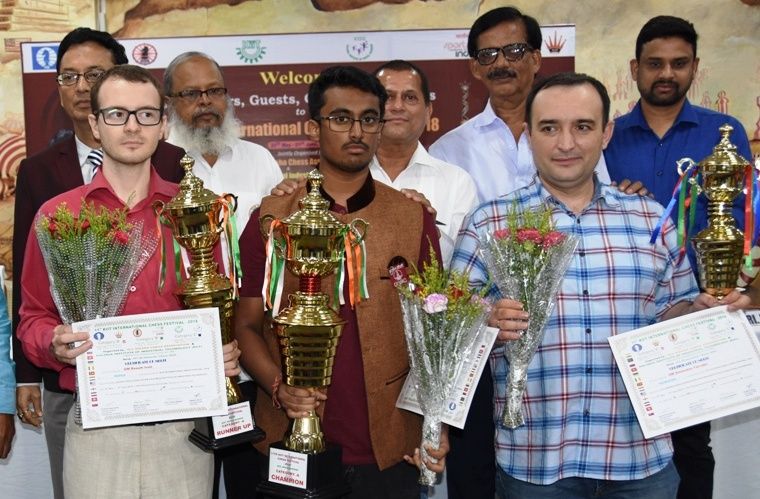 Venkatraman had had a brilliant start to the event, having won all four of his first four rounds. In rounds five and six, he was held to draws by D Gukesh and Farrukh Amonatov, respectively. And then began his incredible winning spree. 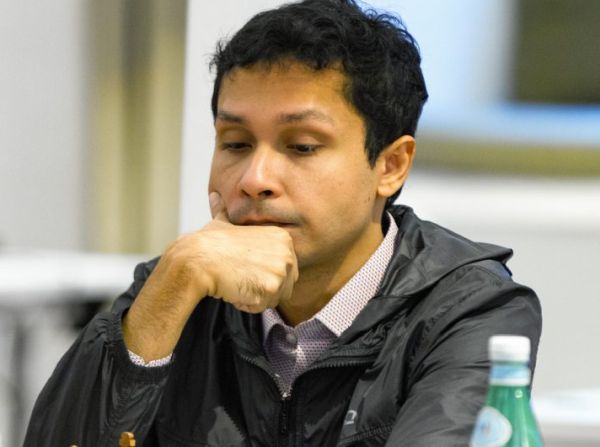 In round 7, Venkatraman was playing against GM Sandipan Chanda (Elo 2573), the fourth seed of the tournament. Chanda opened with the 3.Qd6 Scandinavian with the black pieces but mixed up something horribly. In a fairly balanced position, Chanda miscalculated and offered his bishop. 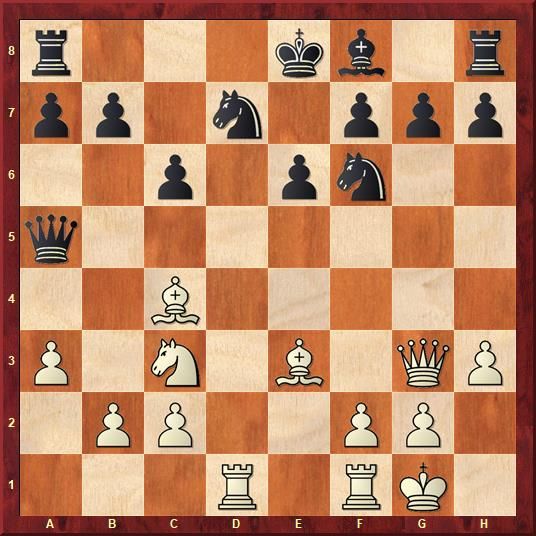 Here, black simply gave up his bishop with 13…Bxa3?

Of course, taking the bishop with the b2 pawn leaves the c3 knight en prise. But Venkatraman simply pinned the offending bishop with 14.Ra1 and there was no way out for black. Chanda limped on for five more moves before throwing in the towel. 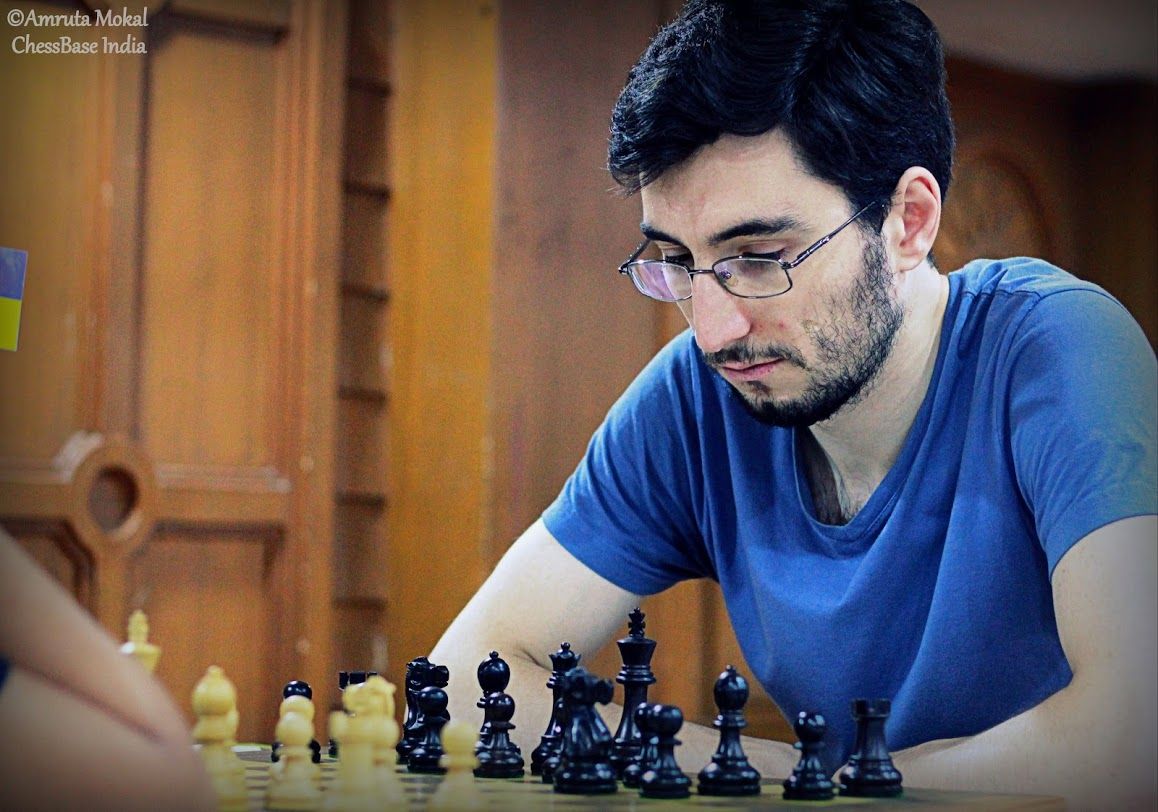 In round 8, Venkatraman had to survive Tukhaev's pawn storm in the Najdorf | Photo: Amruta Mokal

In the antepenultimate round, Adam Tukhaev had the white pieces against Venkatraman. Against the Indian lad’s Najdorf, Tukhaev went on the aggressive on the kingside, storming his pawns towards the enemy king. But before move 20, Venkatraman succeeded in exchanging queens and Tukhaev’s attack led him nowhere. The position was still equal though. However, by around move 32, Venkatraman began encircling white’s weak pawn on d5 and hacked it off eventually. This also entailed a major exchange of pieces which left Tukhaev a pawn down in a knight endgame. Within the next 15 moves, Venkatraman succeeded in forcing resignation. 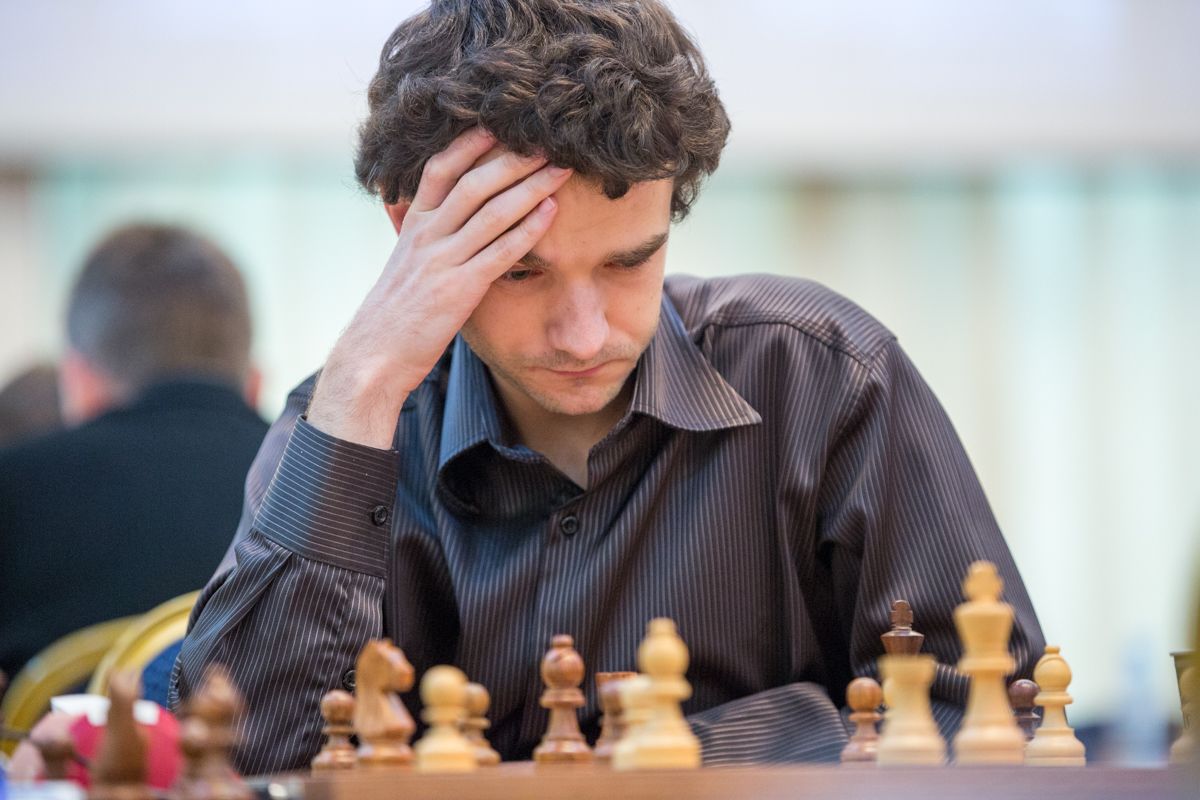 The penultimate round featured a faceoff between Karthik and the top seed of the tournament, Maryn Kravtsiv | Photo: Maria Emelianova

With this win, Venkatraman had joined the top seed of the tournament Martyn Kravtsiv in tournament lead; and in the penultimate round, the two were slated to lock horns. Play kicked off with the closed variation of the Ruy Lopez where Venkatraman had the white pieces. Out of the opening, the young IM battled for advantage in a roughly balanced position by breaking open in the centre. Kravtsiv refused to take the e5 pawn, however. But in doing so, he gave his opponent a dangerous bit of piece activity.

Once he had the initiative, Venkatraman began pressurizing Kravtsiv generating threats on the kingside and in the centre. On his 30th turn, Kravtsiv cracked and allowed his opponent a pretty tactic to finish things off. Venkatraman was also alert and grabbed this opportunity with both hands. 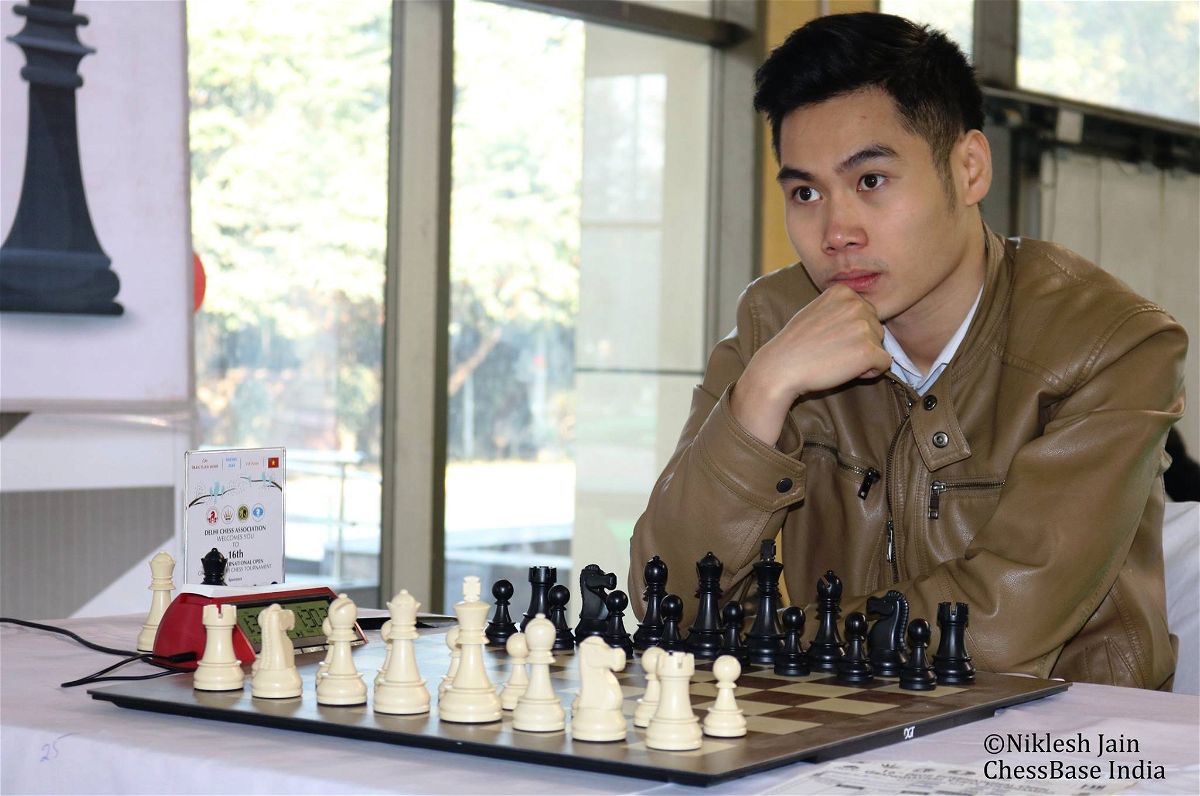 However, Venkatraman did not take a quick draw in the final round. With the black pieces, he went for a full-blooded fight deploying the Gruenfeld defence and, quite thematically, was able to secure a queenside passed pawn. His bishop pair only added to this trump of his by covering the advancing squares of the passer. By the 32nd move, Tran Tuan Minh dropped a central pawn trying to stop the advancing black passer and was forced to resign six moves later.

This win made Venkatraman the clear winner. Having scored 9.0/10, he was a full point ahead of a field that consisted of two 2600+ GMs and many other extremely strong players. Rated a modest 2457, the 19-year-old recorded a stunning 2740 performance and gained 34 Elo points with this win. Not to mention, he also inched a step closer to the GM title by scoring a grandmaster norm.

Besides Karthik, two other Indian players scored norms in the tournament. 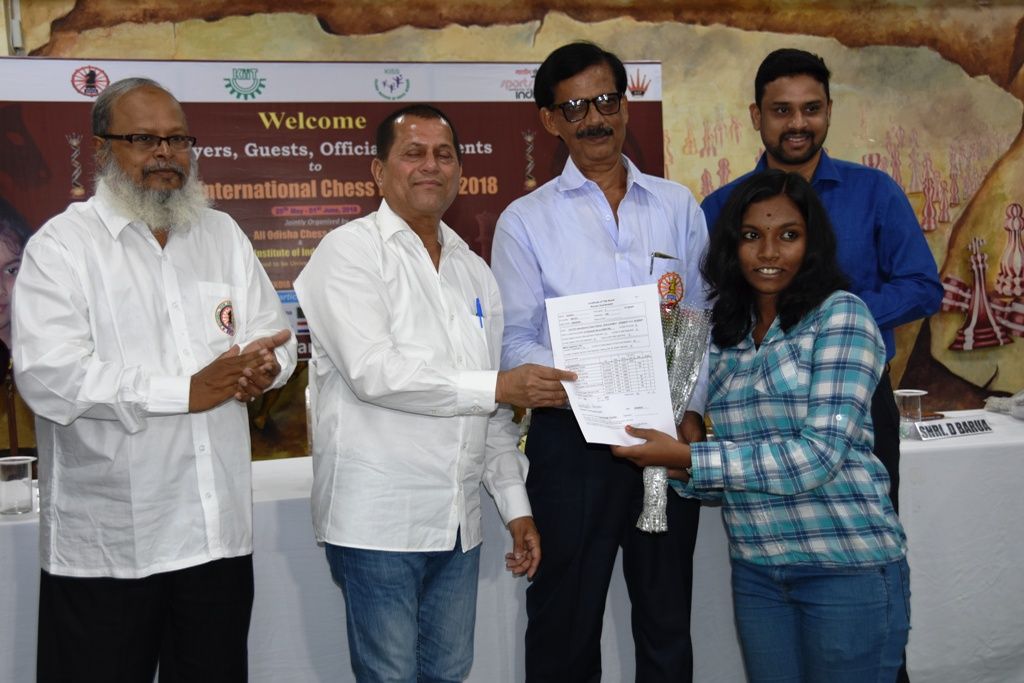 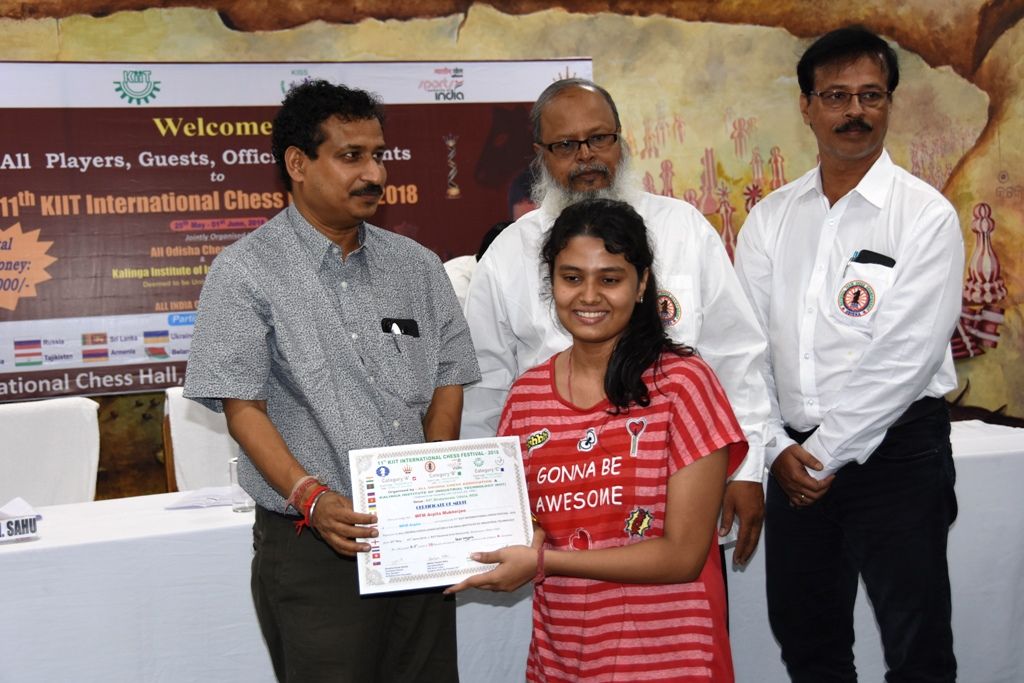