At the conclusion of the seventh round at the Karpov Poikovsky International, Vidit Gujrathi had drawn his sixth game of the tournament against Vladislav Artemiev. Meanwhile, Jakovenko, who has taken sole lead in the tournament, is already 1.5 points ahead of the Indian. Ian Nepomniachtchi, too, is ahead by a point. Given the current scores, it looks highly improbable that Vidit will have any shot at the title. After all, with two rounds to go, overcoming a 1.5-point lead seems highly unlikely. | Photo: Vasily Papin

Vidit and his drawing streak

When the seventh round of the Karpov Poikovsky International came to a close on Sunday evening, India’s rising star, Vidit Gujrathi found his chances of title contention had almost evaporated. Having drawn both of his games in rounds six and seven, he is now a point and a half behind the current tournament leader, Dmitry Jakovenko. With just two more rounds to go, this means that Vidit will not have any realistic chance of catching up for the top spots.

Meanwhile, for the first time in the tournament, Nepomniachtchi had to settle for the second place. Having won both of his last two games, it was Dmitry Jakovenko who succeeded in overtaking the tournament’s top seed after Nepo agreed to a quick draw in the seventh round against Vladislav Kovalev.

In the sixth round, all games ended decisively, except one. That one game was Vidit Gujrathi’s game against Emil Sutovsky. This time around, Vidit tried to mix things up a little in the opening in an attempt to score a win. He opted for the Open variation of the Ruy Lopez to kick the game off. But just a few moves into the game, it was clear that the Israeli GM was fully prepared to face the Ruy Lopez. 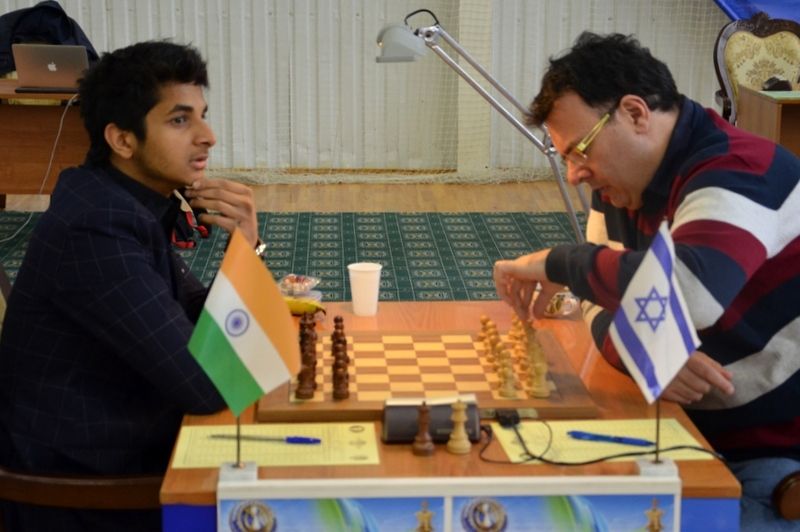 Vidit's game against Emil Sutovsky was the only draw of round 6 | Photo: Vasily Papin

A fully balanced position arose out of the opening and before the 20th move, an endgame was reached. All that remained on the board was a pair of rooks and a bunch of pawns for each side. Sutovsky’s central passed pawn was far advanced in the position. But Vidit had absolutely nothing to worry about in the position since his rooks were much too advanced in their post on the seventh rank. Forcing perpetual checks in the position took no effort from Vidit’s end.

While Vidit drew his game, tournament leader, Ian Nepomniachtchi made a strong comeback post his loss against Vladimir Fedoseev in the previous round. Usually, after having lost a game, Grandmasters tend to slow down and go on damage control mode by playing safely in the following game. But in Nepomniachtchti’s case in the sixth round of the tournament, he knew that this was his chance of scoring a point. His opponent was Victor Bologan who is having one nightmare of a tournament in Poikovsky. Out of his first five games, Bologan had lost four and drawn one.  Moreover, Nepomniachtchi had the white pieces. 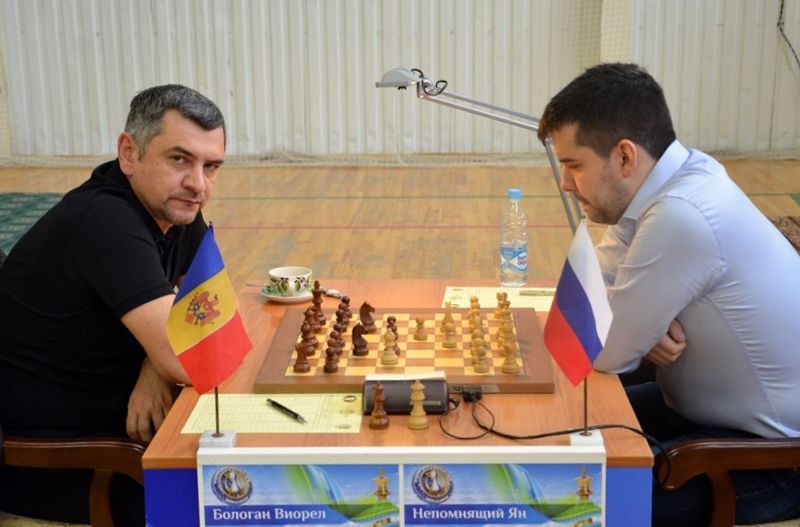 Despite suffering his first loss of the tournament in the previous round, Nepo went all guns blazing against Victor Bologan | Photo: Vasily Papin

Bologan tried to play it safe, venturing into the Berlin wall in the hope of keeping the game unruffled. But after Nepo castled queenside in the game, this was hardly going to be the case.  Pawns stormed down the board on both flanks as players tried to break through to the enemy king. On his 24th turn Bologan tried to rip open the white king with back to back pawn breaks but this backfired horribly. Giving up an exchange, Nepomniachtchi converted the game very easily.

Another important game of the round was the clash between the other two co-leaders of the tournament, Dmitry Jakovenko and Vladimir Fedoseev. Fedoseev opened with the Caro-Kann and whipped out a novelty as early as on move 6. But coming out of the opening, it was Jakovenko who had the better position. Jakovenko soon won a pawn and liquidated into an endgame. 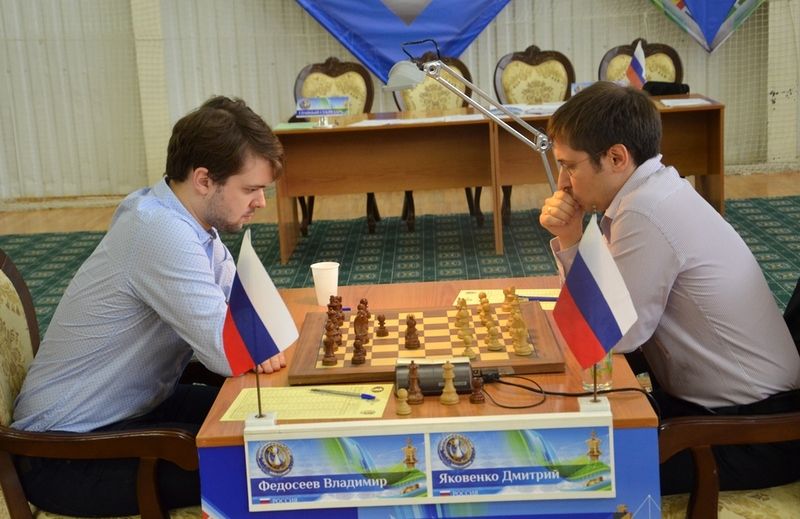 Despite his extra pawn, though, converting this endgame was no piece of cake for Jakovenko. It took him a good 70 moves to force a resignation from Fedoseev.

Meanwhile, Boris Gelfand, after his spectacular save against Vidit Gujrathi in round five, continued his great form in the sixth round.  Playing against Korobov, Gelfand found a neat bishop sacrifice that won him the black queen for a rook and a minor piece. 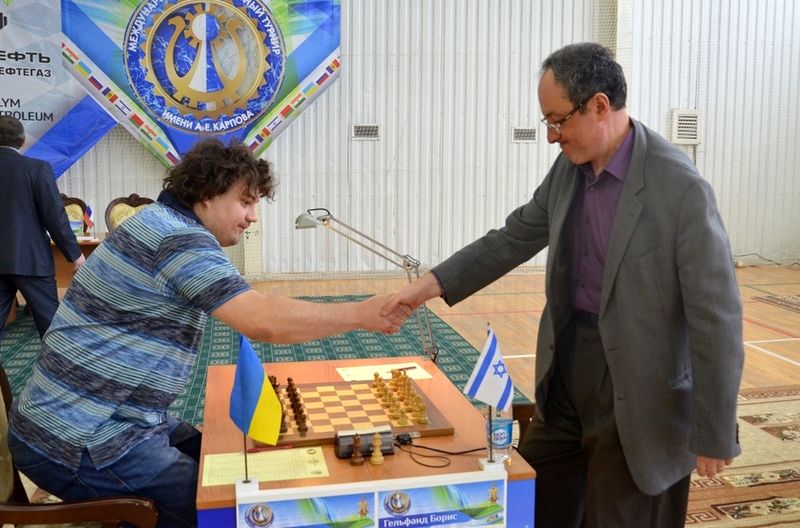 Korobov defended tenaciously trying to save half a point but his rook and knight weren’t able to match his opponent’s all-powerful queen. With this victory, Gelfand came within a half-point radius of the leaders.

Going into the antepenultimate round, the need for a victory was already beginning to be felt. Vidit was a full point behind the leaders and the number of games remaining to overcome this gap was reducing after every round. In this round, Vidit was pitted against the young Russian GM Vladislav Artemiev. Rated 2704, Artemiev was definitely not an easy opponent. 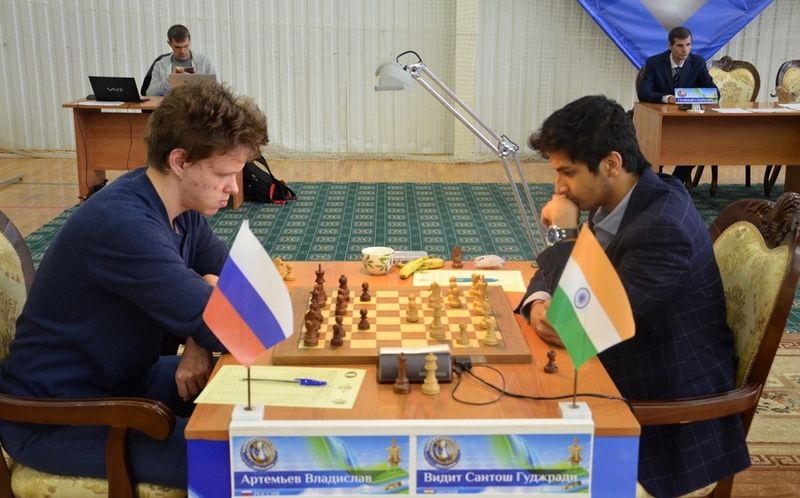 The game began with a Gruenfeld defence in which Vidit had the white pieces. Again, Vidit wasn’t able to gain much out of the opening. By the time the 30th move was reached Vidit was already an exchange down but with his two bishops, Vidit was able to hold on to a draw. The game went on for 64 moves but Vidit was, in the end, able to save half a point.

Jakovenko and Nepomniachtchi were the leaders going into the antepenultimate round and were closely followed by Boris Gelfand who was half-a-point behind. But by the end of the round, things had almost magically fallen in place for Jakovenko. 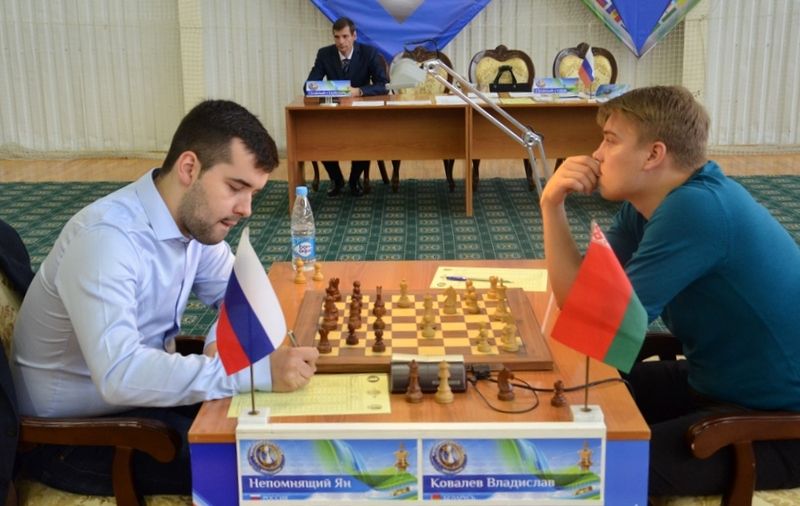 To start with, Ian Nepomniachtchi headed straight for a draw in his game against Vladislav Kovalev. In a 3.Bb5 Sicilian, the two merely played 17 moves before calling it a day. 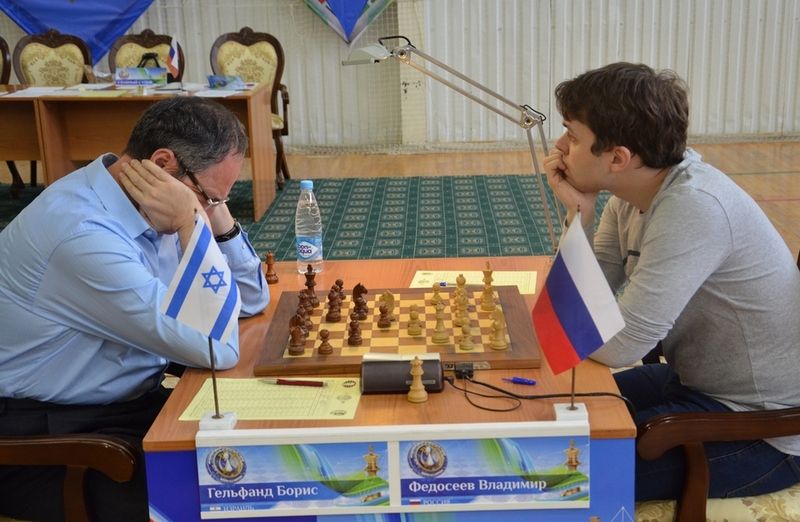 Fedoseev did not pose Gelfand many problems in a Bogo Indian | Photo: Vasily Papin

Another important game for the standings was the one between Gelfand and Fedoseev. Had Gelfand won this one, he would have become a serious chance at the title. The game was fairly balanced throughout and one move after the first time control was reached, peace was signed.

Jakovenko’s own game didn’t look too promising either. He was black against Bologan in a Sicilian Taimanov and had reached an almost dead drawn endgame. But Bologan, who has been struggling badly in this tournament, blundered. 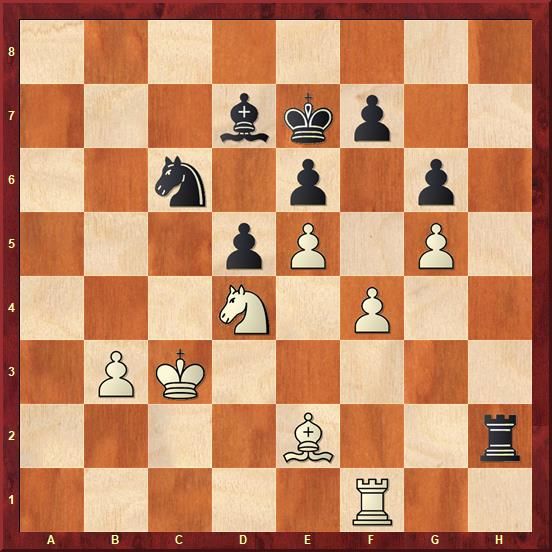 Black is threatening to take on d4 and then on e2 in this position. This could be parried easily with 44.Re1 or 44.Nxc6+ followed by Re1. But Bologan went for 44.Ba6 and now the bishop is running out of squares. Play continued 44…Nxd4 45.Kxd4 Ra2. 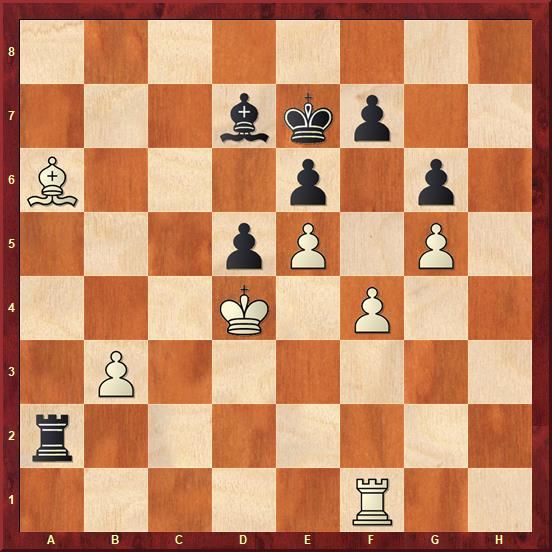 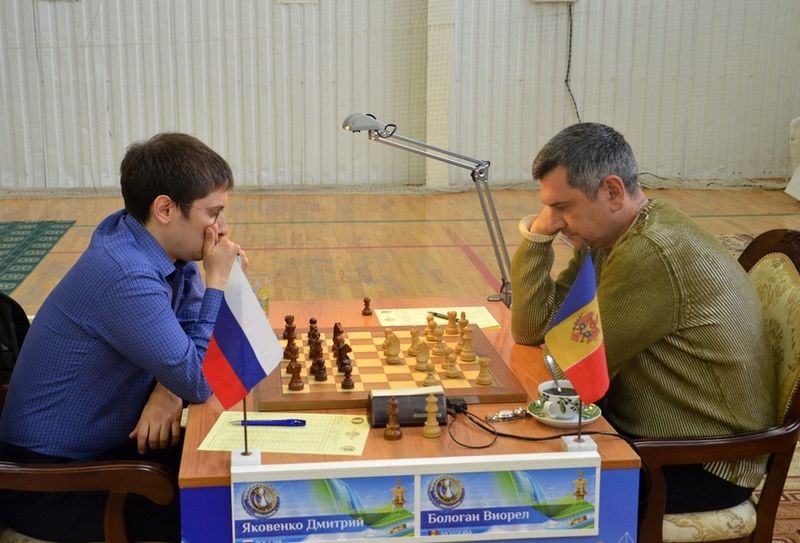 Jakovenko, with his win in round seven, has taken sole lead in the tournament. The only two players who could catch up with him are Ian Nepopmniachtchi and Boris Gelfand. As for Vidit, it his highly unlikely that he will be able to overcome a deficit of 1.5 points in two rounds with just two rounds remaining.