7-year-old prodigy from Mumbai Jaivardhan Raj won the prestigious Maharashtra U-7 State Championship held at Kolhapur from 24th - 27th May, with an impressive score of 7.5/8 points. He started the tournament as a 3rd seed behind top seed Shourya Khadilkar of Mumbai and 2nd seed Nivaan Khandhadia of Pune and went on to play rock solid chess to cement his position for the title by remaining unbeaten throughout the event. In this article we let you know more about this young talent, who is sure to make it big in the chess world in the years to come!

Currently number five in India (U-7), Jaivardhan Raj started the under-7 Maharashtra State Selection tournament as the 3rd seed and went on to deliver a rock solid performance. The 6th round was the most crucial round as he was up against the top seeded Shourya Khadilkar whom he beautifully outplayed and cemented his lead, maintaining it till the last round to lift the champion's trophy. 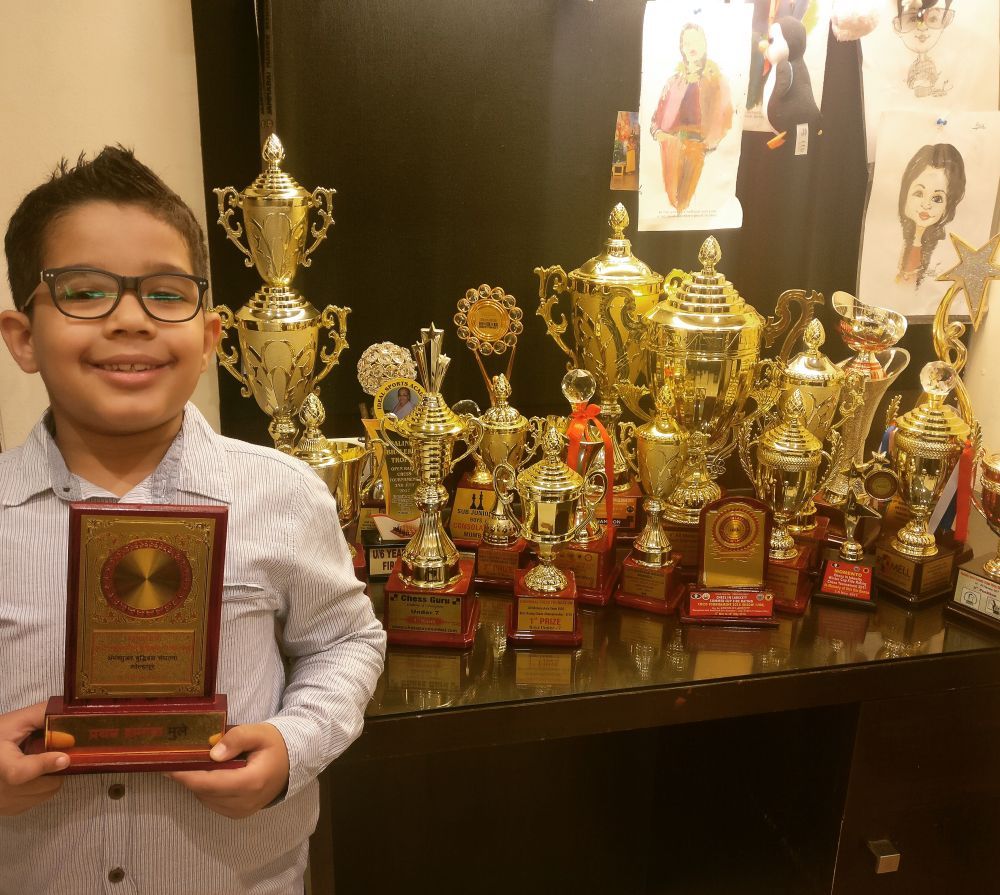 All together 80 players participated in the event, out of which 3 were rated players. Vivaan Vijay Saraogi of Nagpur was the 1st runners up and Ahire Aatish Keda of Nashik was the 2nd runners up. The event was held at Kolhapur from 24th May - 27th May. The final standings of under-7 Maharashtra state. You can get the complete standings here. 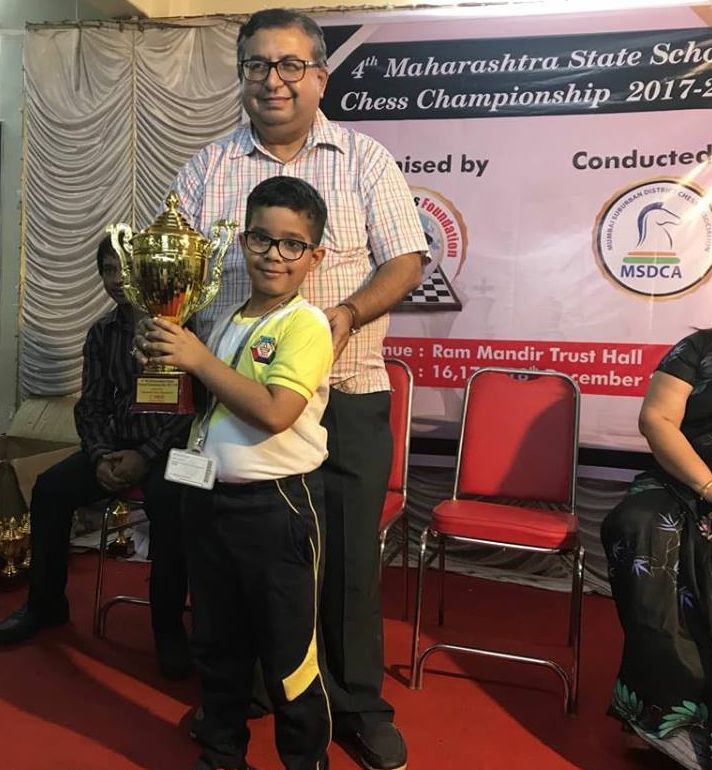 With Mr. Ravindra Dongre. Jai is one the few player in India who is under-7 and has a rating in all the three formats of the game!

With this impressive win Jaivardhan is all set to represent Maharashtra at the Nationals which are to be held in Tumukur, Karnataka in the month of July. Currently he is the holder of all four major chess titles in Maharashtra simultaneously. He currently holds the title of Champion for: 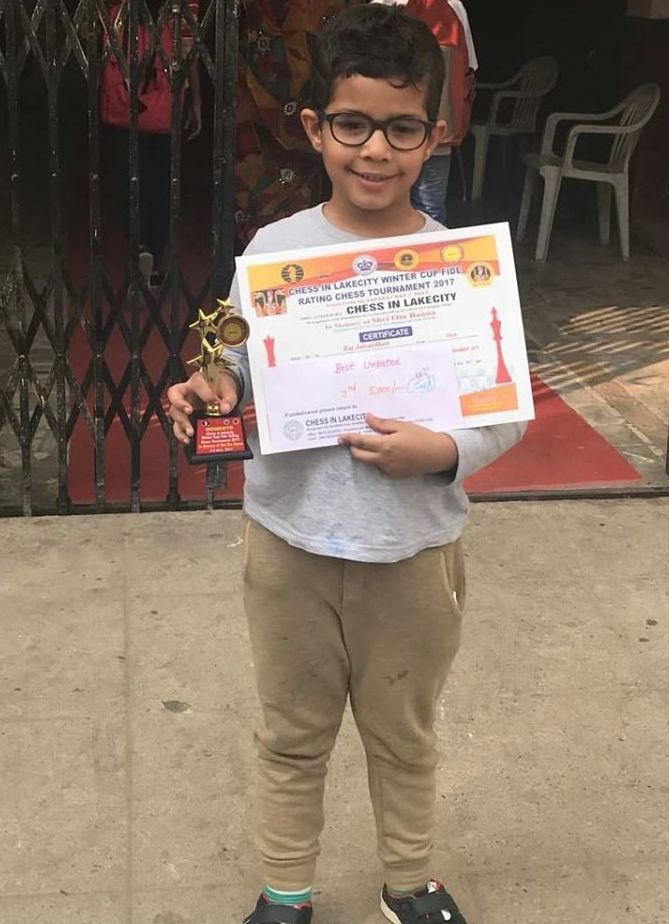 Jai with his best unrated player trophy in Udaipur!

Jaivardhan had shown a lot of promise when he bagged 2nd best unrated player at the Udaipur Rating Chess Tournament in November 2017, where he achieved the FIDE rating of 1085 elo at the age of 6 years and 8 months and also gave an impressive performance winning 6 games out of possible 8 against rated opponents. 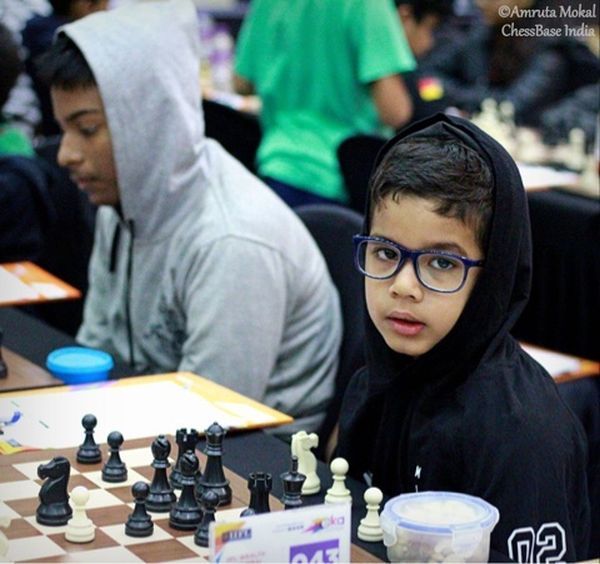 “He hasn’t really realized what he has actually achieved,” said Jaivardhan’s father Satyam Raj on this feat, while his mother Anubha added that “It was expected, but the feeling is entirely different when it happens for real. Certainly, our goals are higher and this is the first step towards them.” 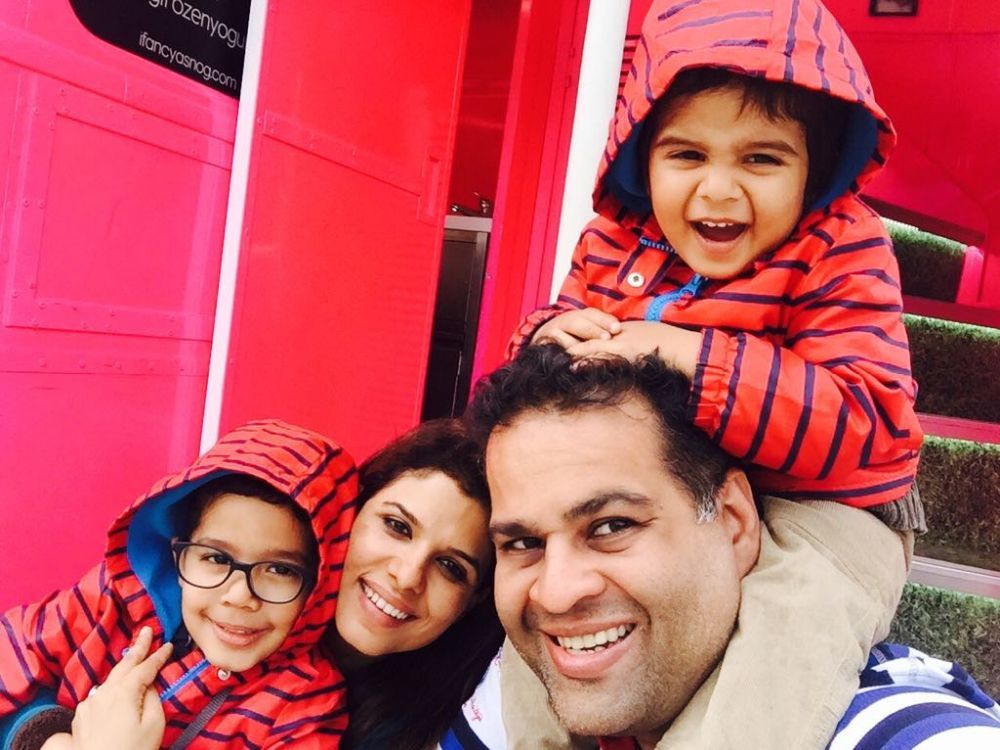 "Behind every young child who believes in himself is a parent who believed first."- Matthew L Jacobson

In 2018, he was the best under 7 at the 2nd Holi Cup Lakecity open FIDE Rating Tournament and the 2nd Runner-up at the Late Bharatbai Halkude Memorial Below 1600 FIDE Rating Chess Tournament 2018 in Pune. He has also finished strong at the Asian Youth championship 2018  at Chiang Mai, Thailand and the World School Championship in Durres, Albania. 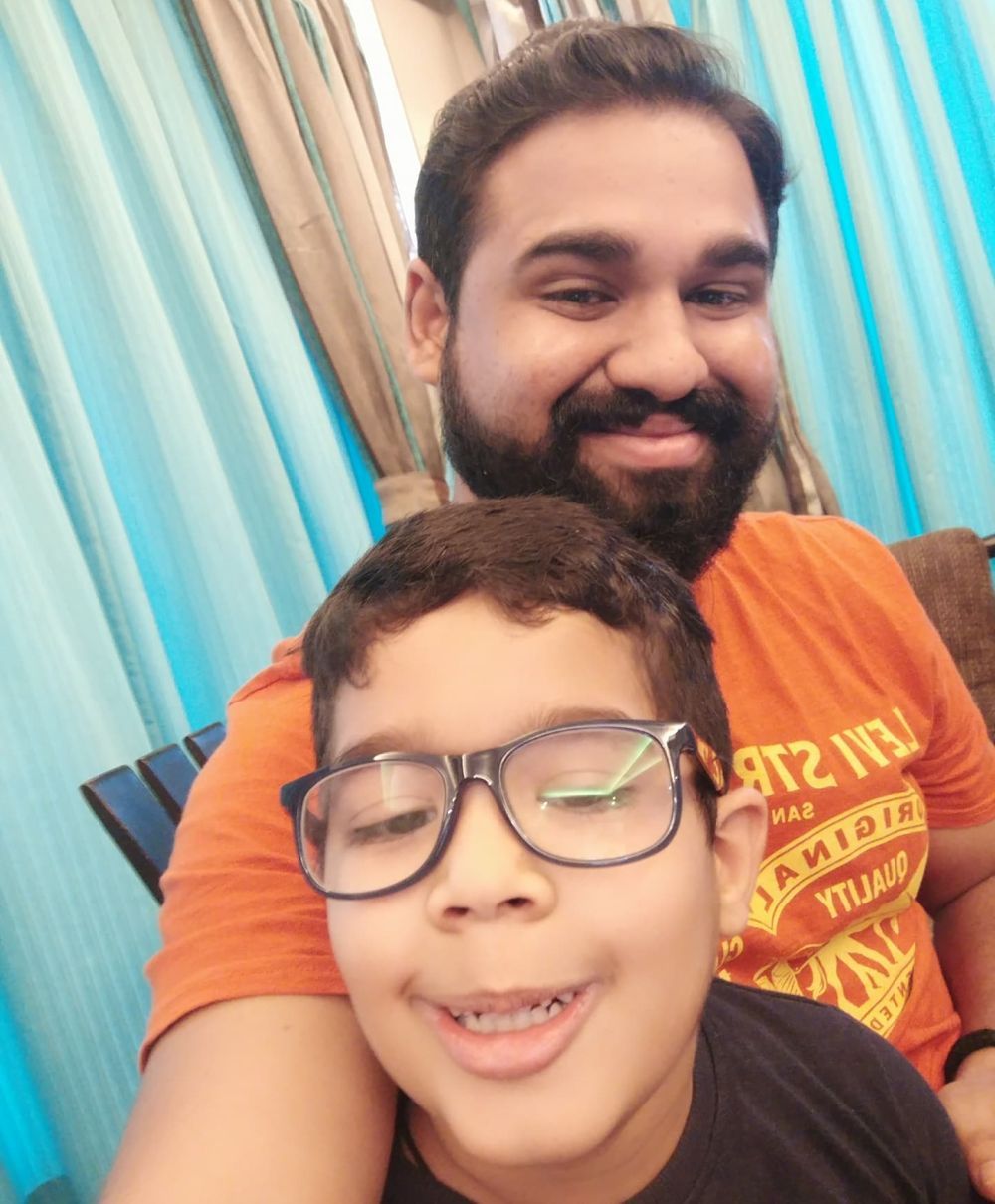 Its very important for a kid like Jai to meet the right mentor at the right moment and for Jai it was Harsh! | Photo: Harsh Kanoje

“His passion for chess is matched by his by love for trophies.” says his coach, Mr. Harsh Kanoje (orange city Nagpur) who feels he is a special talent. His passion for the game is just amazing. Kids of his age can get easily distracted with various things happening around them. But, Jai is an exception since the start of his training. Jaivardhan is a very calm and quiet child, which has helped him reach this stage. He is highly talented and definitely a GM prospect." 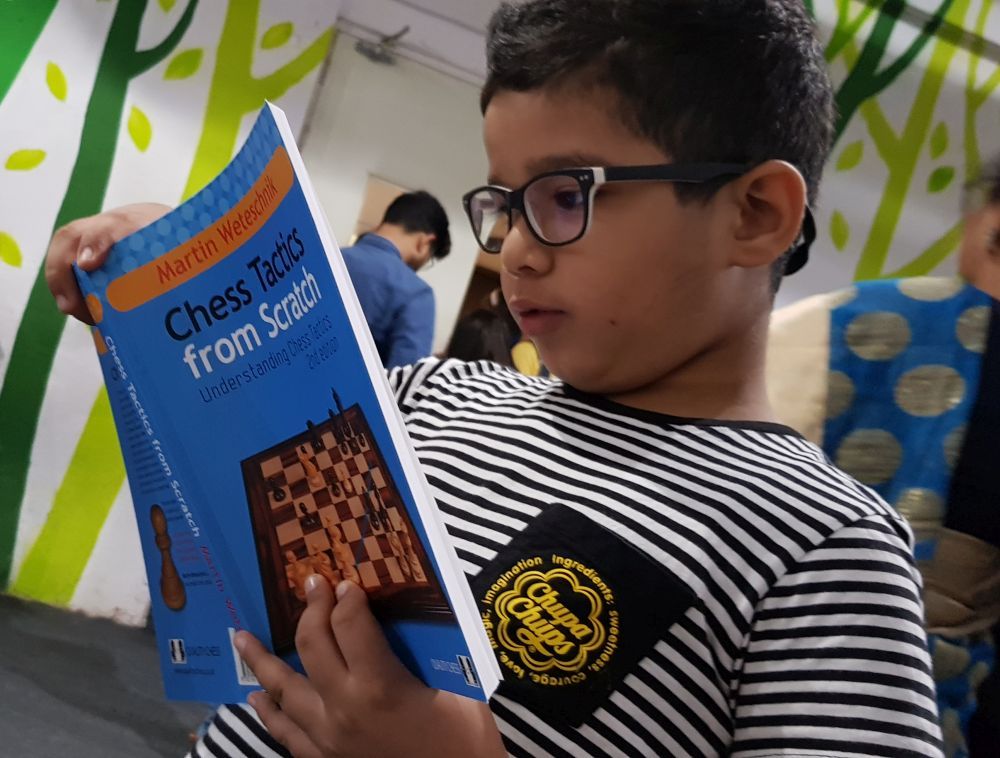 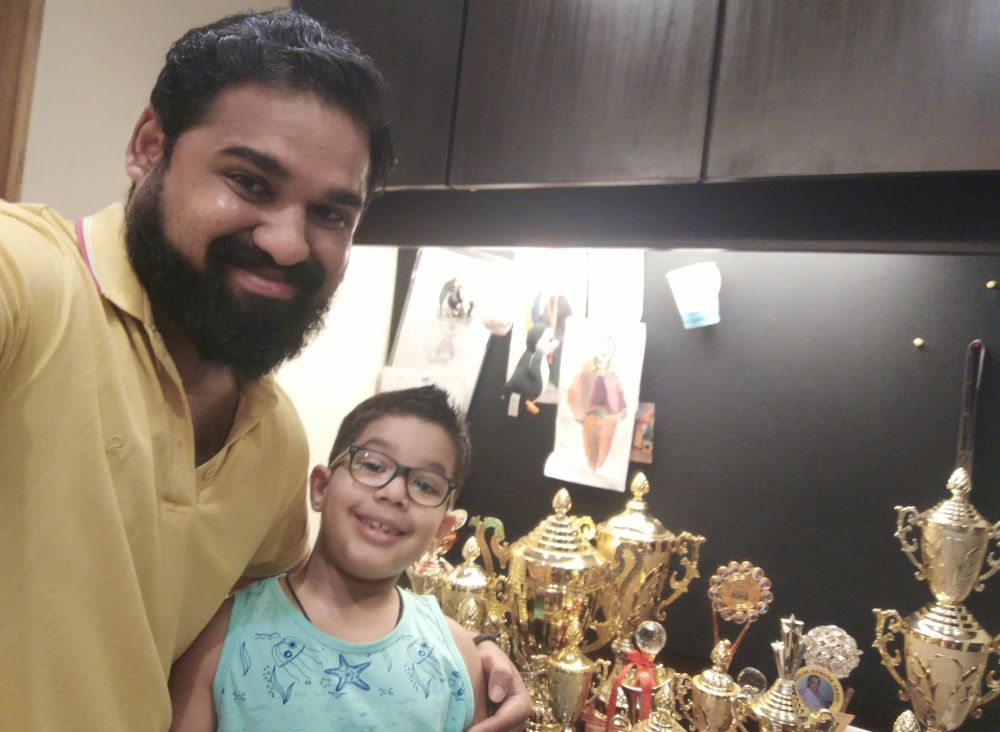 Here are couple of games played by Jai:

Jamnabai Narsee School have been very supportive to Jai and helped him to stay flexible and play tournaments without any pressure. Born on 1st of March 2011, Jai is still very young and has a long way to go, but we wish him all the very best with all his future endeavors and hope to see him keep climbing up the chess ladder.

On a parting note we leave you with this video, that will show you how talented this young boy is. IM Sagar Shah sat with him at the IIFLW under-13 tournament and analyzed one of his games. He asked the little boy a lot of questions and this brings out the thought process of Jai who was just 6.5 years old back then!