Isle of Man Masters: Raunak Sadhwani gives Vishy a major scare in the opening round

In its fifth year, the Chess.com Isle of Man Masters has become the strongest open tournament ever! Headlined by six of the world's top ten chess players, the field boasts of as many as 20 Grandmasters rated above Elo 2700. However, as the opening round of the event came to a close, almost half of them were held to draws. Sundararajan Kidambi held Vladimir Kramnik on board four; just one board ahead, CRG Krishna signed the truce against Wesley So. Viswanathan Anand was also on the brink of losing against IM Raunak Sadhwani but the Madras Tiger found his way out and won after 74 moves. Round 1 report.

The Chess.com Isle of Man International has been known over the last few years for being one of the strongest open chess tournaments of the year. Even though the top four players on the world rankings have chosen the event a miss, it boasts of a stellar field that includes all of the remaining six from the world’s top ten. In fact, all of the top 20 seeds are rated above Elo 2700, making it the strongest open chess tournament ever!

The nine-round Swiss league will be played in the Royal hall of Villa Marina in Douglas. The rate of play is 100 minutes for 40 moves, followed by 50 minutes for 20 moves, then 15 minutes for the remaining moves, with 30 seconds added per move from the start. On the line is a hefty £133,000 prize purse, of which the title winner’s share will be £50,000.

One of the biggest changes in this year’s edition is that the organizers have scrapped the randomized pairings for the opening round and have gone back to the traditional Swiss manager pairings. This, of course, means that, unlike last year, the second and the third seeds would not face each other in the opening round itself. But the inaugural round did witness some very interesting matchups.

On the sixth board, GM Viswanathan Anand was to face his 13-year-old compatriot, IM Raunak Sadhwani. Raunak has played fearlessly against some very strong grandmasters in the past. In this game, too, Raunak played ruthlessly to reach a winning position in the middle game. But Raunak was playing the Viswanathan Anand after all and nerves did play a role in the game.

Anand had opted for the 4…g6 variation of the Ruy Lopez, something he has been seen using quite frequently since the Batumi Olympiad. Sadhwani looked well prepared. Exchanging a couple of minor pieces, he got out of the opening with a pleasant position.

On his 18th move, Anand dived into danger with his queen and grabbed a pawn but soon began to repent his decision. “I think, his position was just very pleasant out of the opening. I didn’t like it, so I went for this suicidal 18...Qg4. But I simply missed that 20.Ra7 is so strong,” Anand told in his post-game interview.

Sadhwani, however, failed to find the most critical continuation and allowed his opponent to slowly make his way out of the dungeon. Equality had been restored by the 30th move and eventually, Anand managed to pull out a win.

Anand also pointed out after the game that Sadhwani is “ridiculously underrated” and said that it was an unpleasant feeling for him to see the pairings.

“OK, now I am relieved to have won,” Anand said with a sigh, in conclusion | Chess.comNews YouTube. 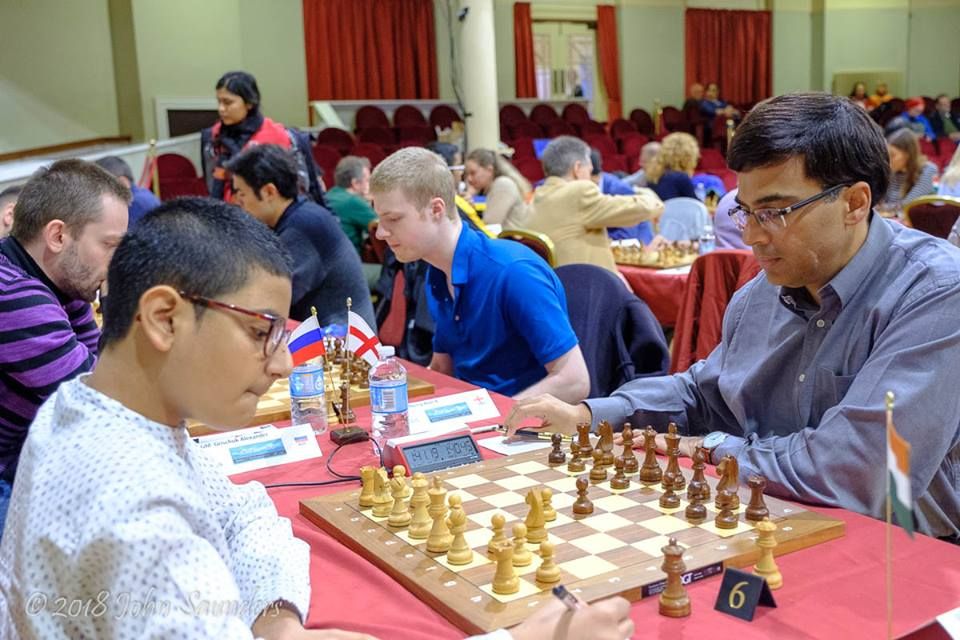 One board above Anand, another Indian International Master, CRG Krishna played some excellent chess against Wesley So to hold the American number two to a draw. So, who had the white pieces in the game, went all out for a victory grabbing space on both wings of the board quite early in the game. By the 20th move, he had already given up a pawn and was looking to attack down the ‘h’ file.

Krishna simply took the pawn and blockaded the file in question with his bishop. Wesley had taken some risk and, consequently, had ended up in a worse position. Around the 35th move, Krishna was merely inches away from slaying one of the top grandmasters of the world but So generated enough complications in the second time control to wriggle out with a draw. 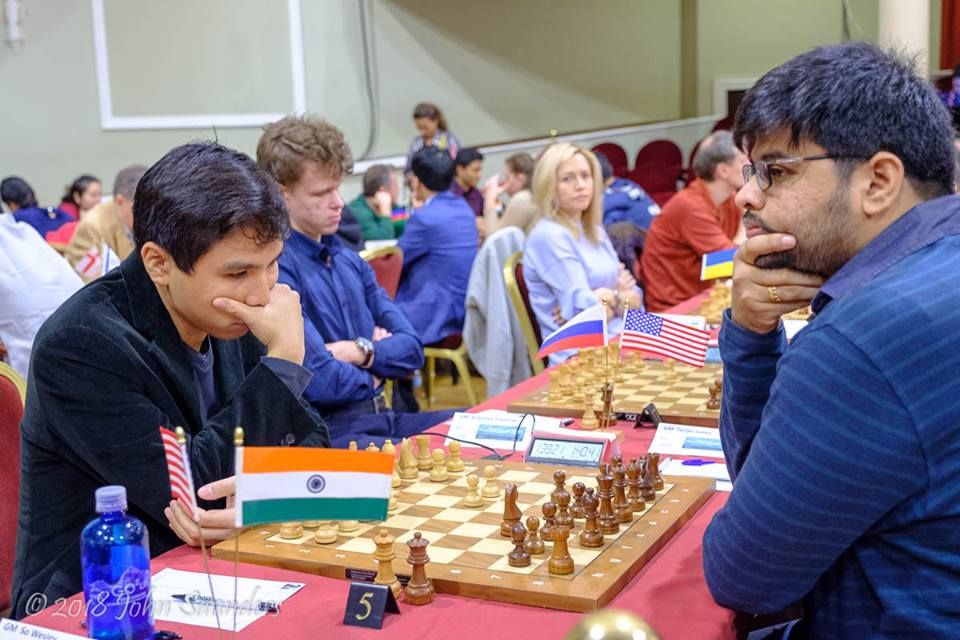 Wesley So had a rough time against CRG Krishna in round 1 | Photo: John Saunders

Vladimir Kramnik also had to walk a tightrope in his game against GM Sundararajan Kidambi. Kidambi got a decent edge out of an English opening and pressed on the queenside with the white pieces. While he had the better position, for the most part, some misplay in the endgame left Kidambi in an equal position by the time the first time control was reached. Kramnik then began to press for an edge but once the queens were exchanged, an endgame with opposite coloured bishops was reached. Kramnik had an extra pawn here. He tried pushing for a win for about 20 more moves but had to concede half a point in the end. 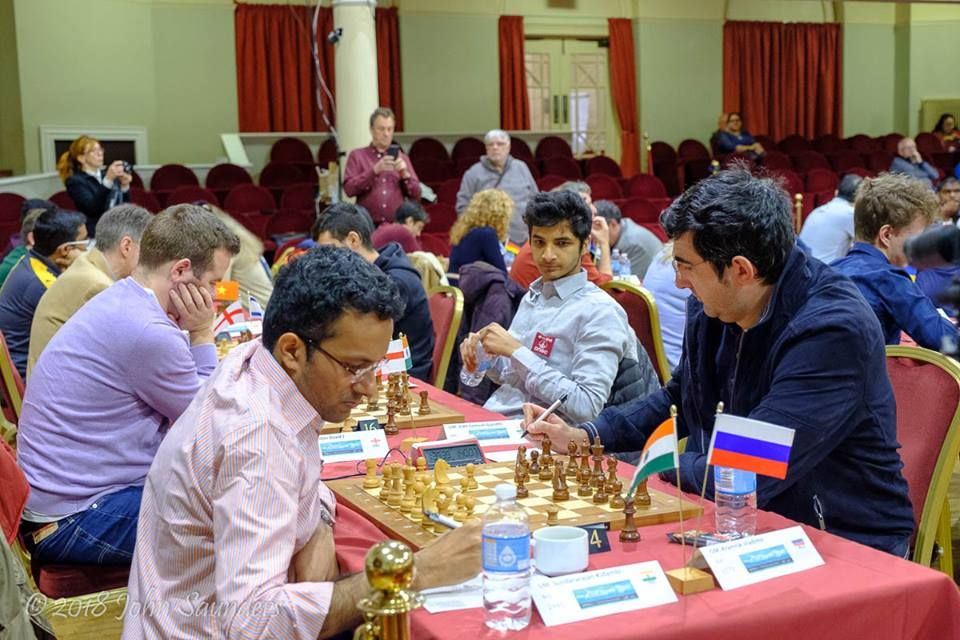 On the 29th board, IM Eesha Karavade lost the shortest game of the round to the 17-year-old American GM Jeffery Xiong. With the white pieces, Xiong generated a monstrous attack on the black king after Karavade made some errors in the opening. On her 16th turn, Karavade made the decisive error that allowed Xiong a mating combination. Averting checkmate required Karavade to suffer a ruinous loss of material. She, therefore, decided to throw in the towel after 21 moves. 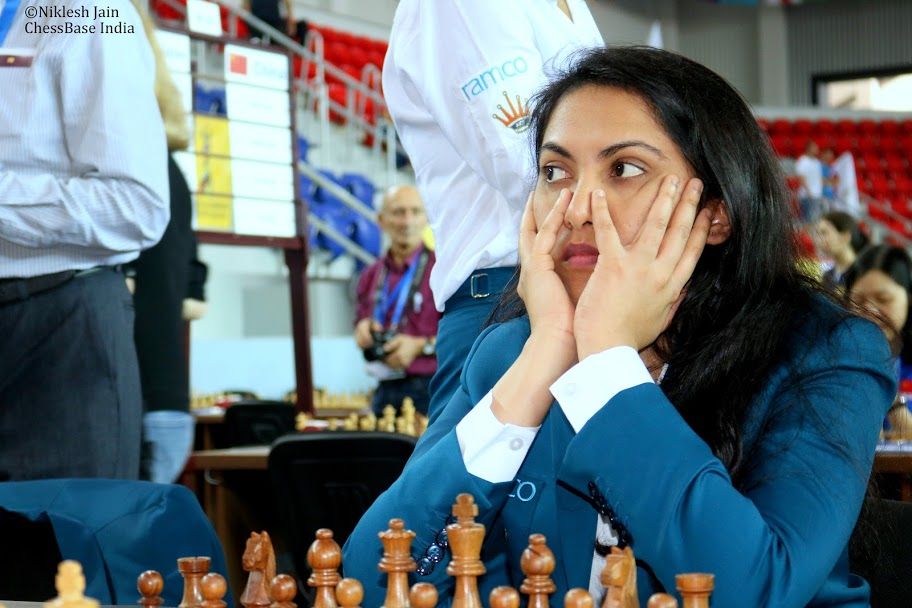 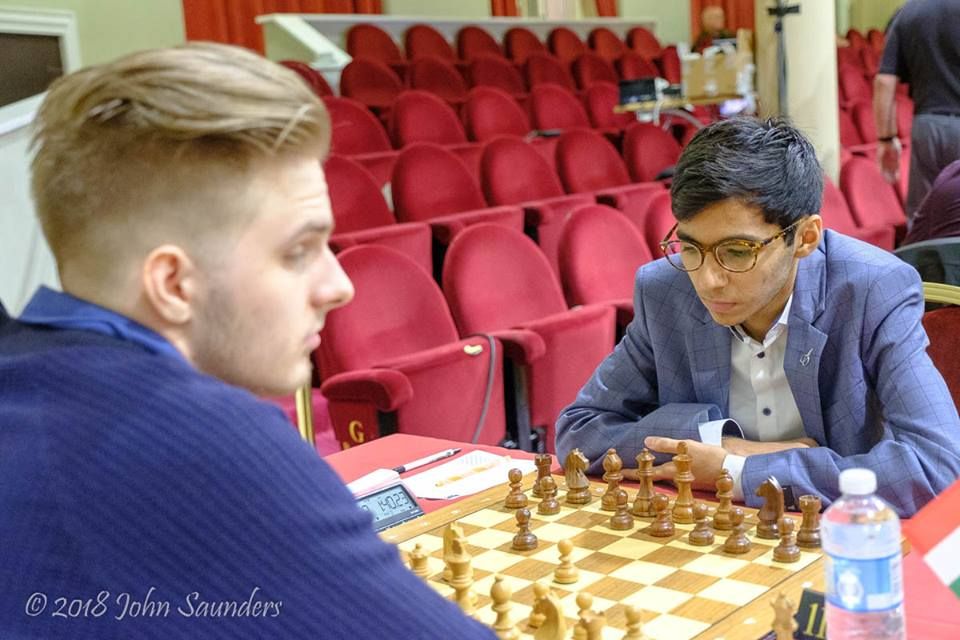 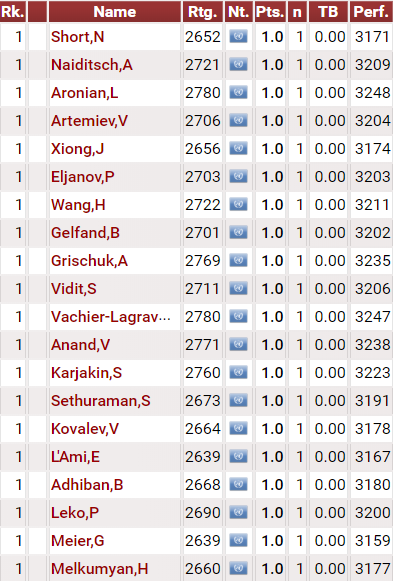