Carl Portman is an English chess player who wrote a unique book on chess. This is not another theoretical book, this is a legacy book as he likes to call it titled 'Chess Behind Bars' by Quality Chess. In his interview with ChessBase India, Carl talks about why he decided to start Chess in Prison voluntarily in England, what motivates him to continue working on this project, how successful he was in this unique project, how he tries to push this in governors' prison agenda, different situations he had to face and how he dealt with it. Here is an interview with Carl Portman by Amruta Mokal.

Carl Portman makes a difference using chess with the inmates

Carl Portman is the manager of chess in Prison for English Chess Federation. He voluntarily made a goal of introducing chess in every prison in England. He started chess clubs, got inmates to talk about chess and most importantly he is trying to influence the governors to put chess in their agenda in prison. In 2015, about eighty-six thousand inmates in the United Kingdom including five thousand women inmates enjoyed playing chess in prison. When he speaks to anyone, he shows the letters he had received from the inmates who tell him the benefits of playing chess, it improves their thinking and in some cases their health. Carl talks about his book, his experience in visiting various prisons, how successful he was in inculcating chess in various prisons of England. 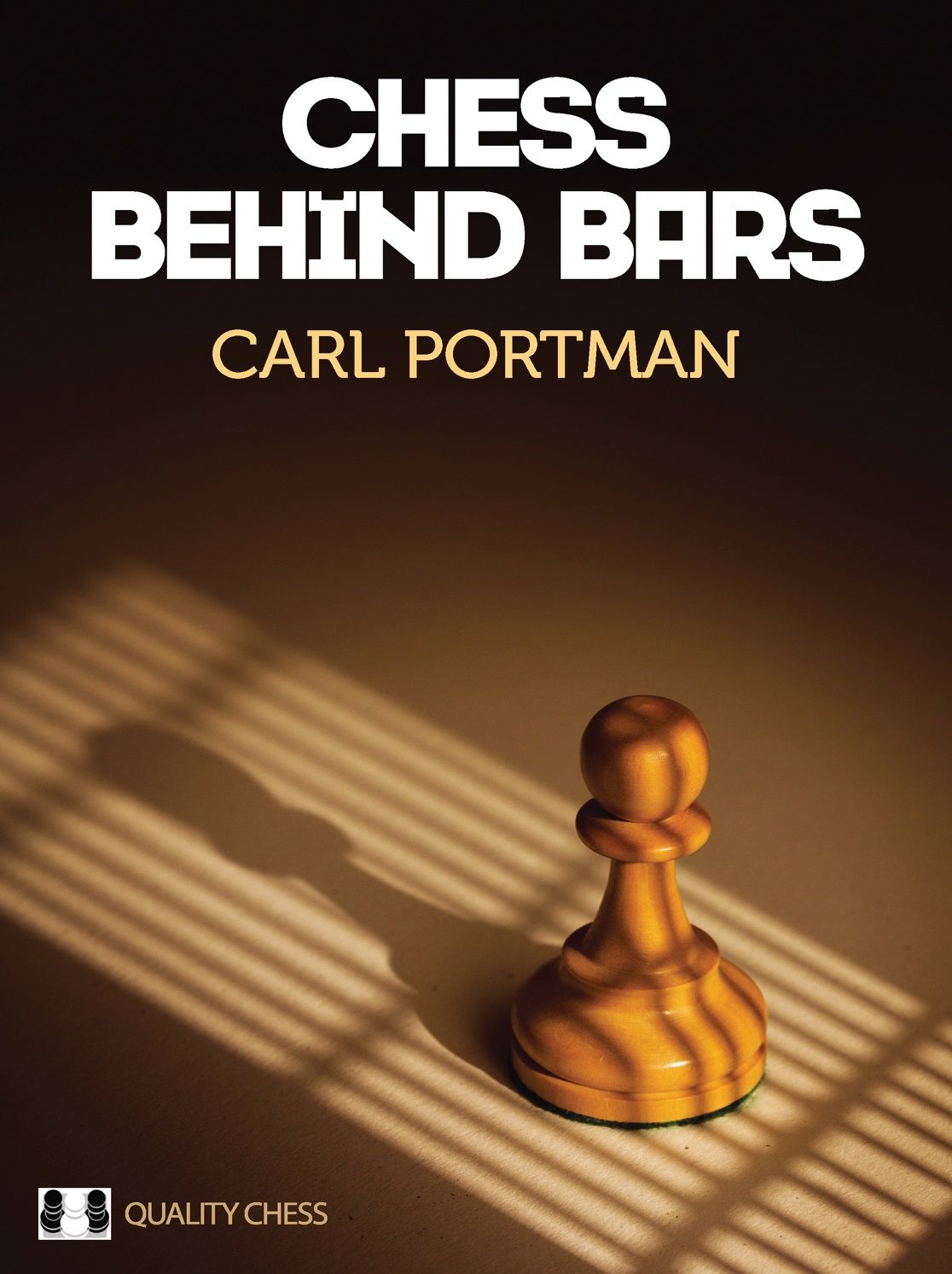 Here is an interview conducted by ChessBase India with Carl Portman

Amruta Mokal (AM): How did the idea of teaching chess in prisons come to you?

Carl Portman (CP): There was a vacancy at the English Chess Federation for such a role. I had always been interested in chess in prisons and the life-changing part it can play after reading John Healy’s ‘The Grass Arena’ which is now a classic. It tells of how a man found chess whilst in prison (or did chess find the man?) and how the game changed his life in a hugely significant and positive way. There is a revealing interview with John Healy in my book.

AM: Which was the first prison that you went and taught?

CP: It was HMP Coldingley in Surrey in the South East of England. It was several years ago but I remember it as if it were yesterday. I had never been in a prison until then and it made a deep impression on me. 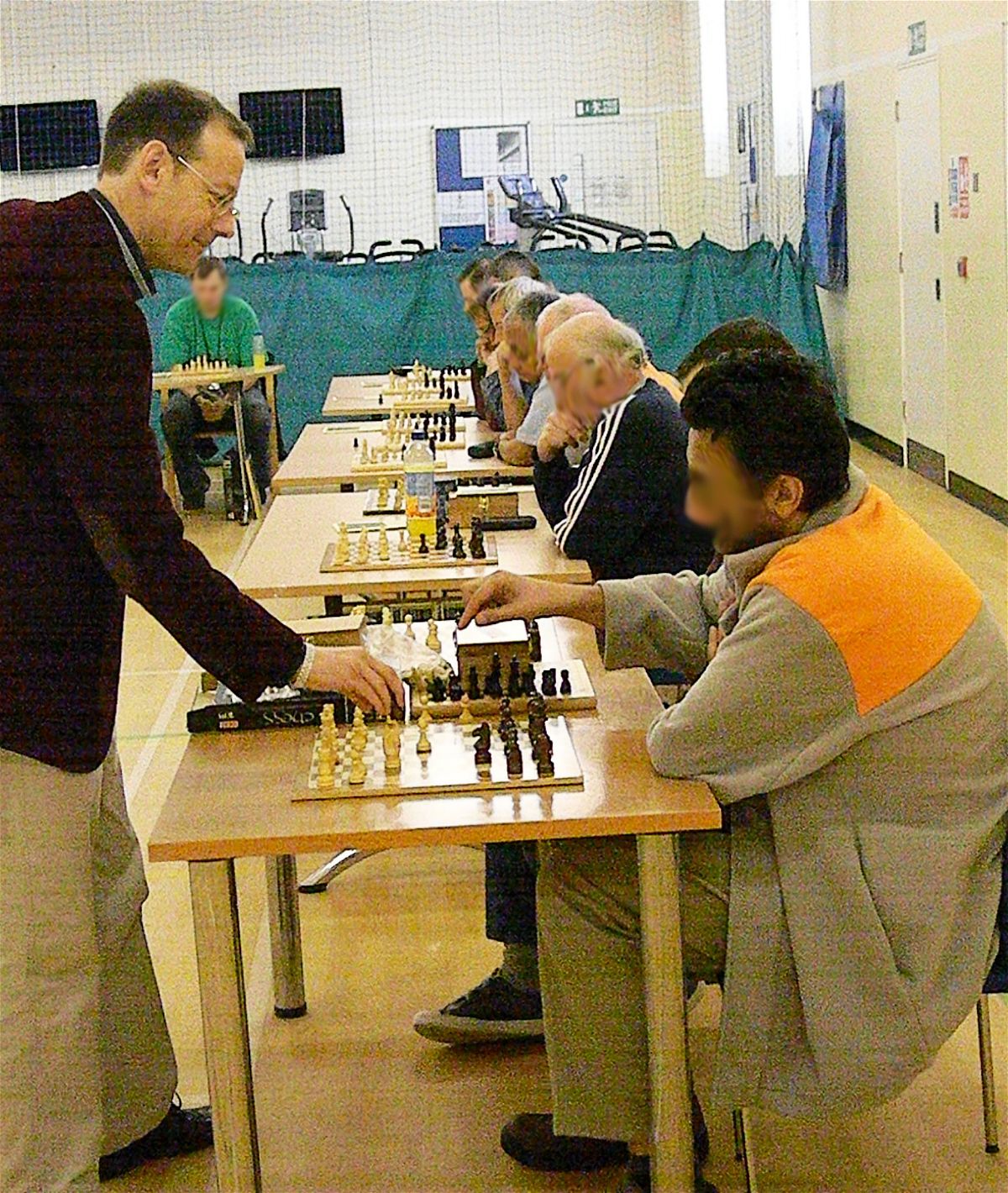 AM: How were you able to convince the prisoners to learn chess?

CP: I didn’t need to! There were already plenty of chess playing inmates and they and the governor had invited me in. They were chomping at the bit to play and that has been the case with every prison I have visited, including the women’s prisons. They appreciate that chess is a tremendous use of time.

AM: How many prisons and prisoners have you taught chess to date?

CP: I prefer to think of it as ‘encouraged’. My usual agenda for a prison visit is to hold a chess question and answer session, donate equipment and books and play a simultaneous exhibition against all comers. There’s no time for one-to-one coaching because inmates do not have much time out of their cells each day – so I work with groups. However, I do have some key inmates who champion chess and keep me informed about how chess is developing in their prison. They teach others and they encourage chess playing in their establishment. These are largely unsung people doing really good things.

AM: I am sure you have had many memories of teaching in prisons. Can you tell us two or three of the most interesting ones?

CP: I think that playing a simultaneous display against up to 20 Category A opponents who have been convicted of very serious crimes, including murder and serious violence focuses the mind. It was a tense atmosphere. It’s certainly different playing chess in a testosterone filled room but the moment the play started the chess did the talking. Strangely, I am not unhappy when an inmate actually beats me. Firstly, they have earned it and secondly the feeling of accomplishment always shows on their face. Their self-esteem and social standing amongst peers shines through. I should mention that receiving a letter from an inmate in America was very enlightening for me, and to be told that chess was the only means that helped him reunite again with his long-lost father was very powerful.

AM: People generally have the belief that it is scary to go and teach chess in prison. Did you feel the same?

CP: I will say that you cannot be a wilting flower to do this work. You will definitely encounter some trash talking and macho psychology including some not very nice comments occasionally but in general, the inmates have no intention of jeopardising a visit because they have been looking forward to a visit for a long time and appreciate I am doing it voluntarily.

The unexpected can and does happen. In fact, there was a sudden outbreak of violence in front of me when I visited one prison – a women’s prison – and some of the people that were due to meet and play me were confined to their cells as punishment so I ended up playing just a handful of people that day.

I have the played the occasional inmate who will for want of a better word ‘cheat’ and move pieces on the board as I am going around but this happens very infrequently. You’ve got to show that whilst you want it to be fun there’s no quarter asked or given when play starts.

AM: What was the improvement that you saw in the prisoners after regular chess lessons?

CP: Inmates write to me and tell me how chess is changing lives, including improving health and attitudes. That’s got to be good news in any language, and in any country. It is not only improvement in chess itself but the friendships that the game creates. Some inmates have made new pals only because of chess. The positive social aspects of chess in prison are truly significant. The ruthless discipline that chess teaches us all about thinking before we move is not lost on a community that has often done the very opposite.

AM: Is there a particularly touching moment close to your heart?

CP: There is. Inmates in one prison had made a special gift for me in the weeks leading up to my visit. It was a chess knight and it was presented with obvious pride by the inmates before my simultaneous began. I was quite choked that they had done this and it takes pride of place on my mantelpiece. 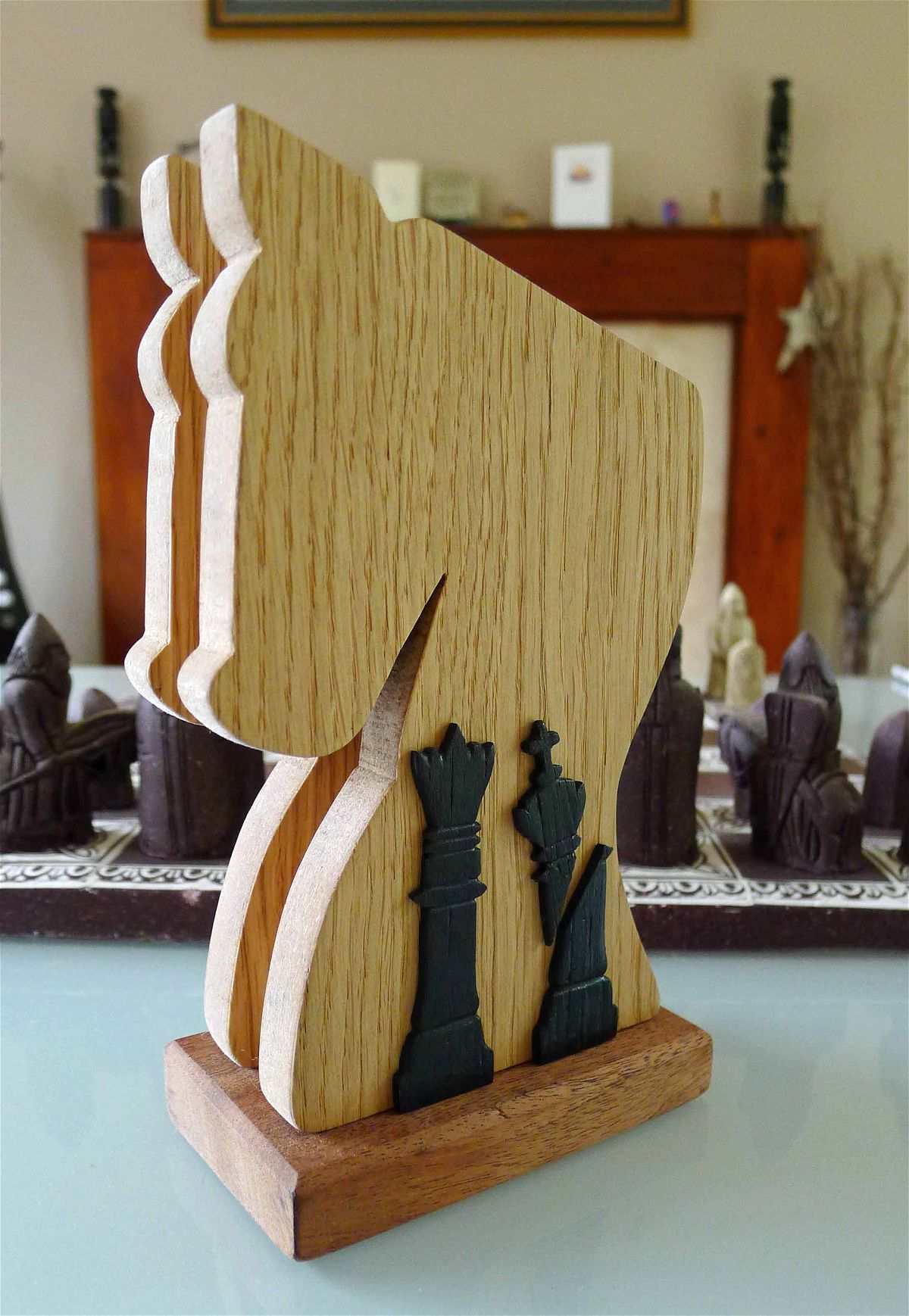 Garth Horse made by the inmates

I also felt incredibly sorry for the lad who sat down to play me in a simul who had right up until the moment of the first move told his pals he was a good player. When I arrived at his board he went bright red and had to admit he couldn’t play. He wasn’t being arrogant, he simply wanted to fit in with a social group and got ‘found out’ at the very last. His mates gave him a lot of stick but I told him to learn to play and I would come back and we could play a game…I hope that happens.

AM: Has any prisoner contacted you after leaving the prison?

CP: Yes. This has always been a worry for friends and family – because of what happens if??? In general terms I will not maintain lines of communication with inmates once they have been released (I do chess in prisons after all) but common-sense dictates that there may be some occasions where responding is necessary – such as if people write to ask how they can find out where their nearest chess club is or how they could play correspondence chess. It’s cool.

AM: Why did you decide to write a book on this subject?

CP: Because there was a desperate need for it. I established this after several prison visits, and I could see that it had redemptive qualities. There is nothing quite like Chess Behind Bars out there at the moment and it is applicable for all prisons across the globe. It’s a legacy book – giving something back to chess. One reviewer kindly wrote that ‘Portman (…) has enlightened the society of criminals with the best of humanity’, and that’s really humbling.

AM: Would you be interested to come to prisons in India and teach chess?

CP: It would be an absolute dream. As I say, the work I have done and the process I use in prisons will benefit inmates and prison staff anywhere. Because of the history of India and chess, it would be especially memorable to visit. There must be a massive community of chess players – and wannabe chess players - languishing in Indian prisons.

AM: What are the things you have learned from this experience of teaching chess to prisoners?

CP: Most importantly I have learned not to judge people. Everyone makes mistakes in life and I personally would hate to be judged by the biggest mistake I ever made in my life. I know for certain that there are some ‘good’ people in prison (Nelson Mandela was jailed, remember) and some ‘bad’ people on the outside. Despite our backgrounds and life stories chess unites is. Caissa loves us all.

AM: With such an interesting subject you have covered, we are very eager to know about your experience and spread it to the world.

CP: Chess in prisons is a good news story, and we could all use good news. I know that there are incredible things happening in prisons in Mexico, the United States, The United Kingdom and other countries with chess and we really need to keep these in the spotlight.

I want my book to be read because it will not only be a lifelong friend to an inmate who feels that there is no hope in a hopeless place, but that the wider community can appreciate the potential for chess to change lives through its many qualities. After all, inmates know that there is a dream behind every prison door.

About the Author of Chess Behind Bars: 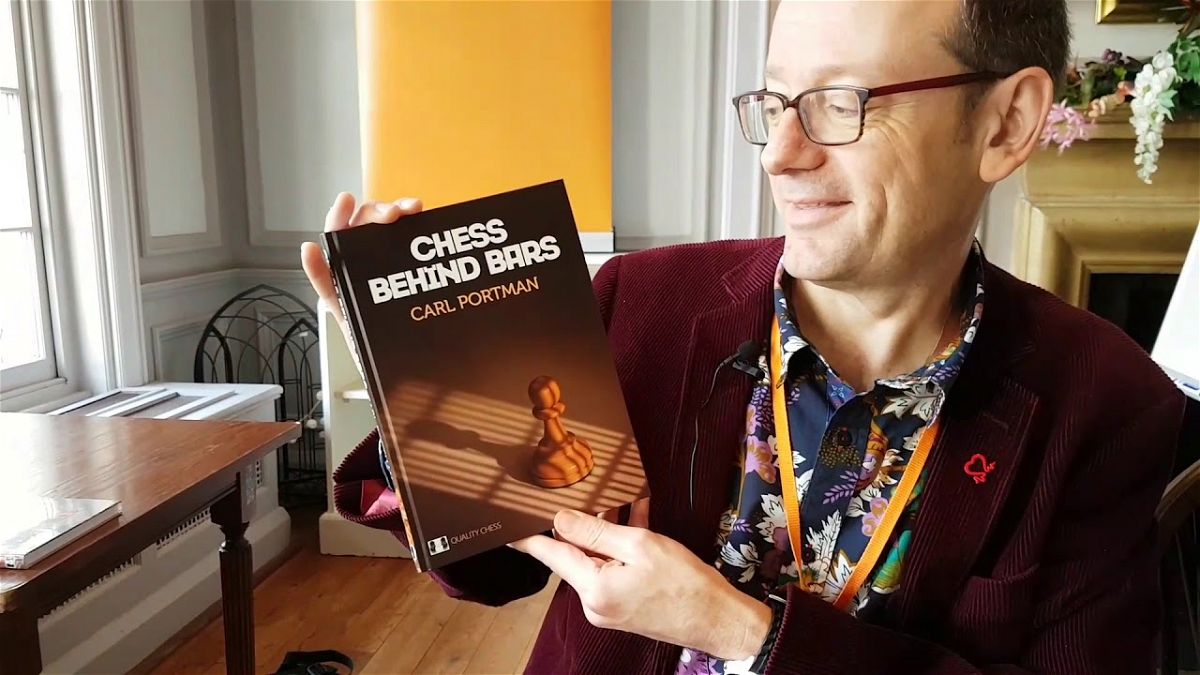 Carl is well known on the chess circuit and has considerable experience of organizing, coaching and playing chess, as well as working in the public sector and dealing with senior officials, including MPs. His goal is to see chess being offered to prisoners across England as one of their educational options and to foster the pursuit of chess in prisons. Carl is aware that the task is difficult, especially in the current climate of prison closures and budget reductions, but he is keen to see what can be achieved in this area.