He started playing chess as early as 5 years old and became the youngest rated player of India in 2002. Soon he became a rising star in the world of chess. Fenil Shah is a known name in the chess circuit of India who recently was crowned with the International Master Title and became only the 4th person from his state Gujarat to achieve it. He is among the very few players to win all the age categories and senior title in the state championships. He has won various national age groups, Asian, Commonwealth and also the British championship U-9 and U-11 in the very same year (2003). But in the year 2010 all of a sudden Fenil disappeared! Yes, he put all his chess progress on hold to pursue his studies and joined an Engineering college only to return back in 2017. Within 10 months he completed all his norms and rating criteria to achieve the IM title. Read this article to know more about Fenil Shah and how he managed to break the break!

Sagar Shah(SS): How did you learn chess?

Fenil Shah(FS): It all started with a coincidence. At the age of 5, I was sitting in one corner of a room watching my elder brother practicing chess with a coach and I was wondering what could be the power of those tiny pieces. Within no time I learned all the moves and started checkmating my family members which made them realize that there was some innate passion within me for the game. Ever since I started playing in tournaments the local coaches were pretty impressed by my performances and asked my parents to get me seriously involved in this game and that's how my journey began. 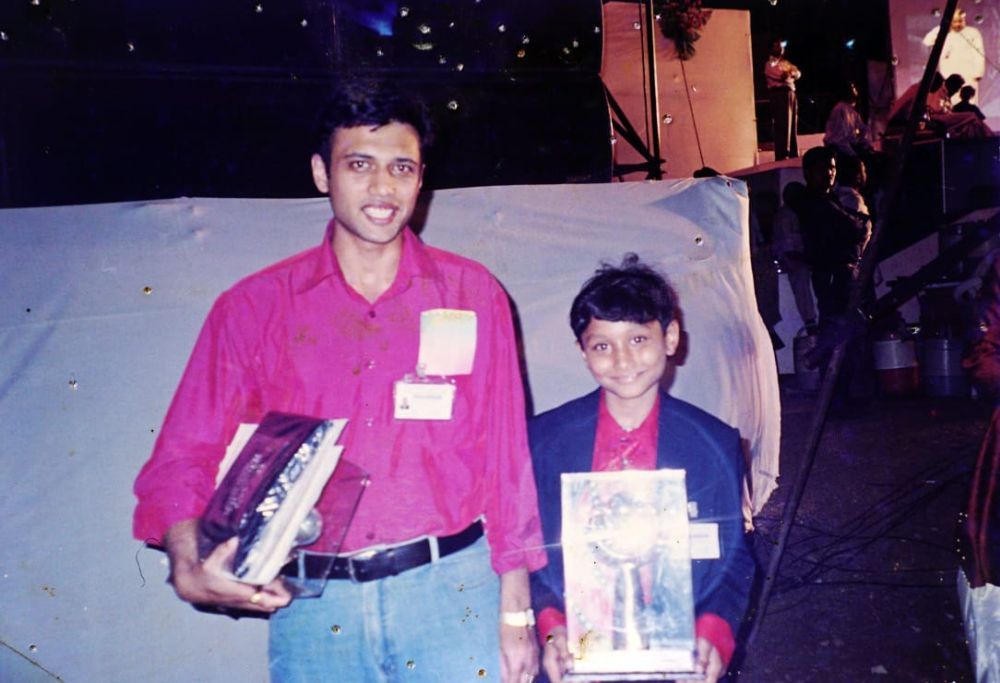 The 11th GM of India with little Fenil! Can you name him? | Photo: Fenil Shah

SS: What were some of your major achievements when you were young? 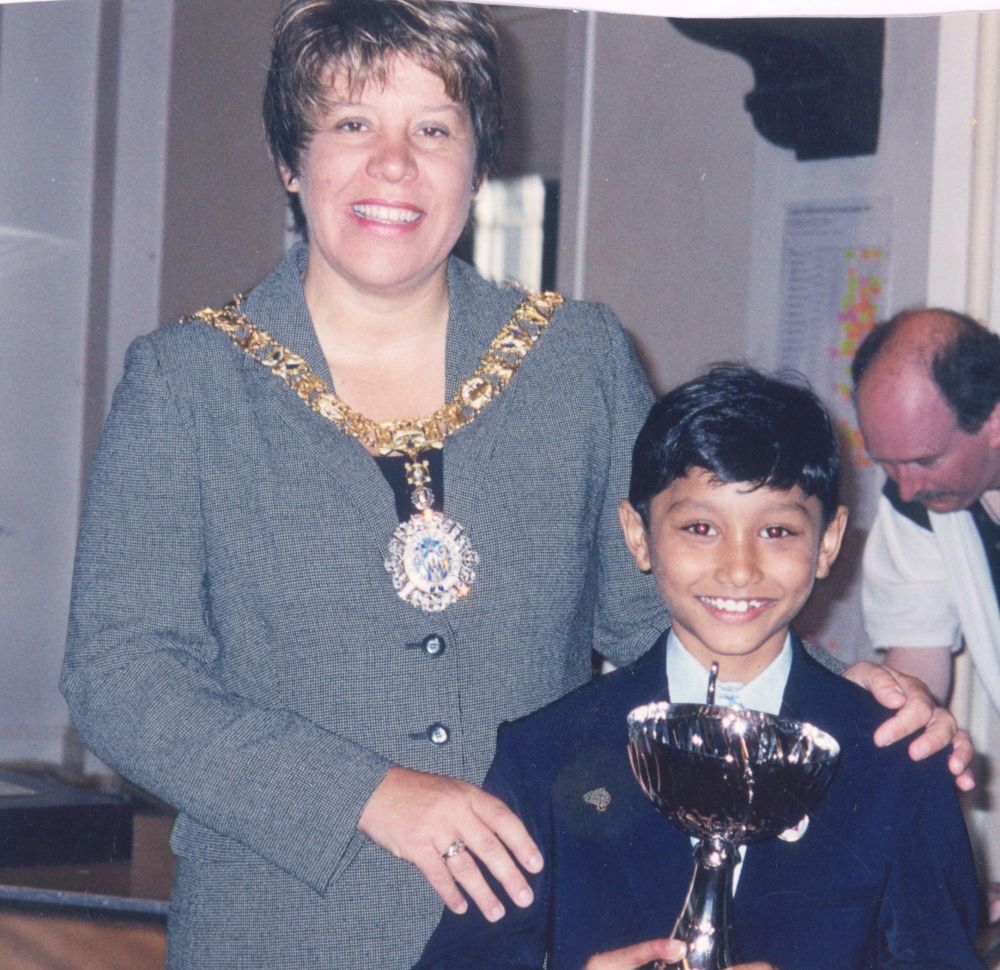 SS: What according to you were some of your biggest skills when you started becoming good at chess?

FS: That’s a difficult question! Well I think my calculation ability and concentration during the game have been my greatest virtue until now, but at the rudimentary stage my innate passion for the game was good enough to make me succeed. 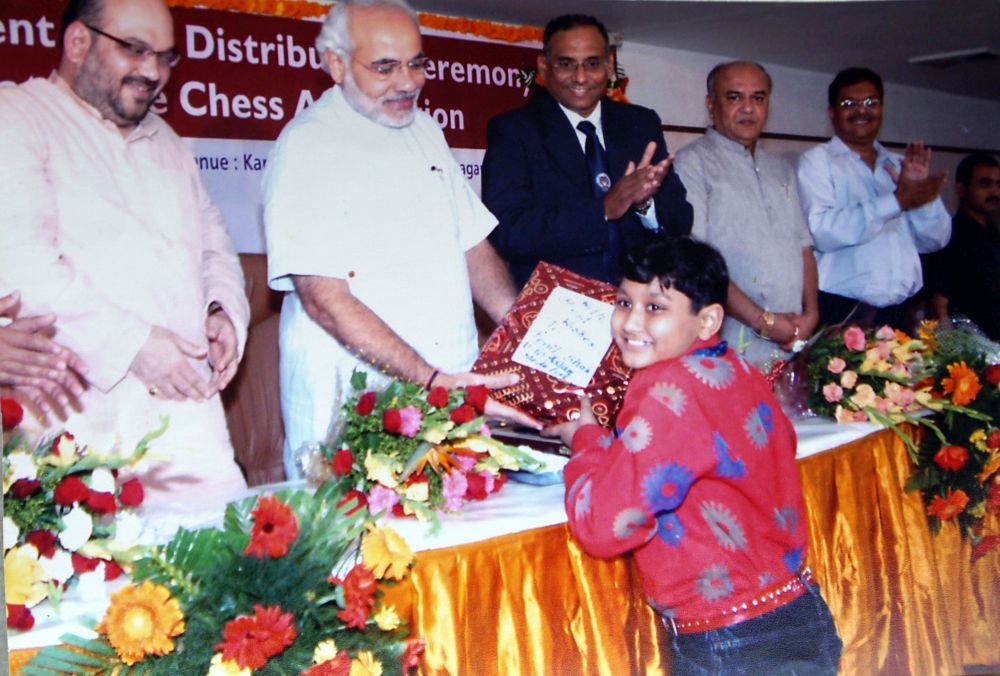 SS: You were doing quite good in chess then suddenly why did you leave chess?

FS: Actually along with chess I was also excelling in my studies and it was a very tough decision for me to prioritize between chess and academics at one point. But I believed in one thing that chess is a sport which can pursued professionally at any age and at that point choosing studies seemed to be a more practical choice. Also due to few changes in the state board education system in science stream it became very difficult for me to continue playing chess professionally but I was always in touch with the happenings of the chess world. 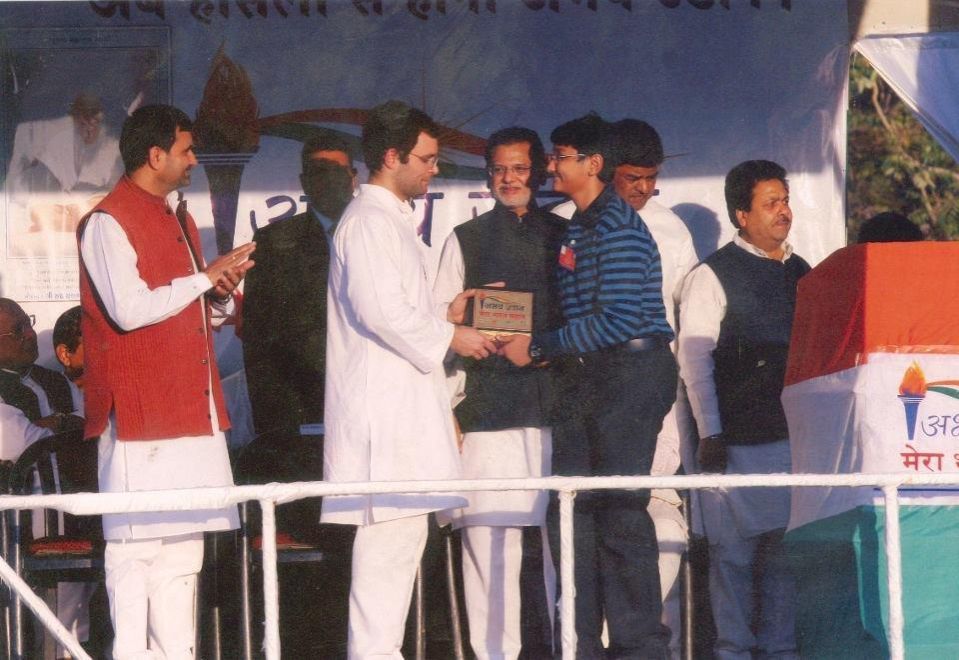 SS: When did you leave chess and what was your rating at that point?

FS: I was 14 years old and in 9th standard when I decided to focus more on my academics and practically speaking I had never left chess but had taken a break from playing professional chess. My rating was around 2252 back then and I had one IM norm. 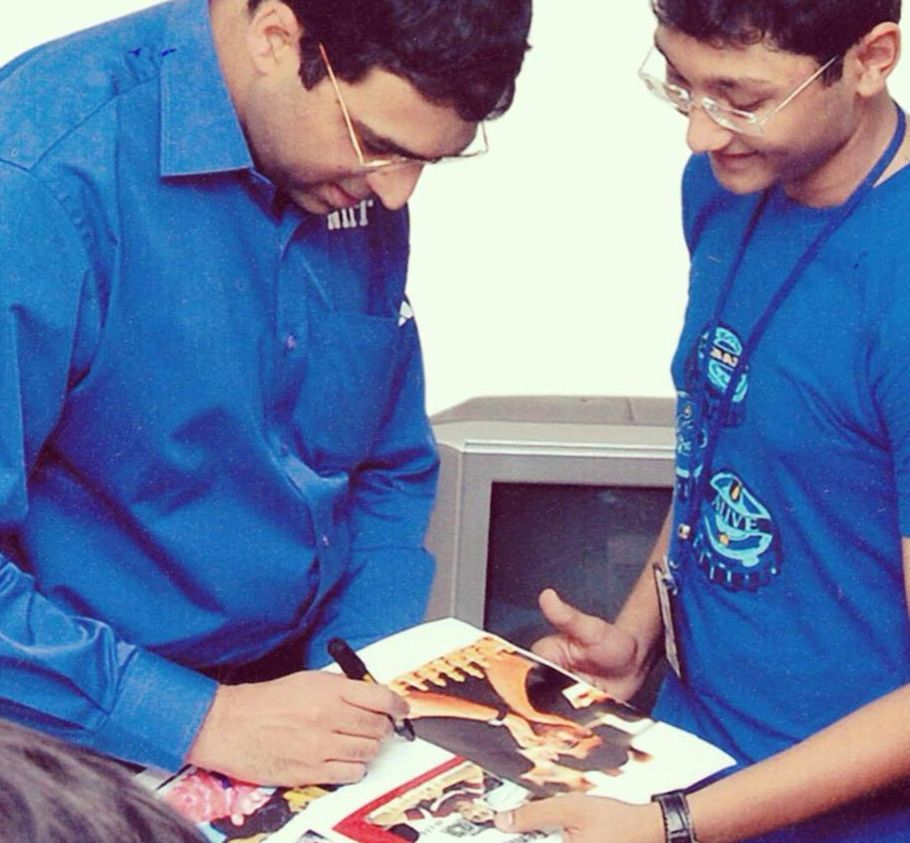 Meeting your idol is amazing, getting an autograph from him is more and somebody taking a picture of that moment is the most! | Photo: Fenil Shah

SS: What did you pursue academically?

FS: I graduated with majors in Civil Engineering and minors in Finance.

SS: When did you decided to make a comeback?

FS: Towards the latter half of my engineering.

SS: How difficult was it to play after such a huge gap?

FS: To be honest it was much harder than I had expected it to be. There was a great extent of technology upgradation! Over the board I had to recalculate the variations a couple of times more just to ensure that I am not losing on the spot and due to which I started ending up in time trouble. The foundation of the chess was still the same but I faced a lot of practical difficulties while playing over the board. 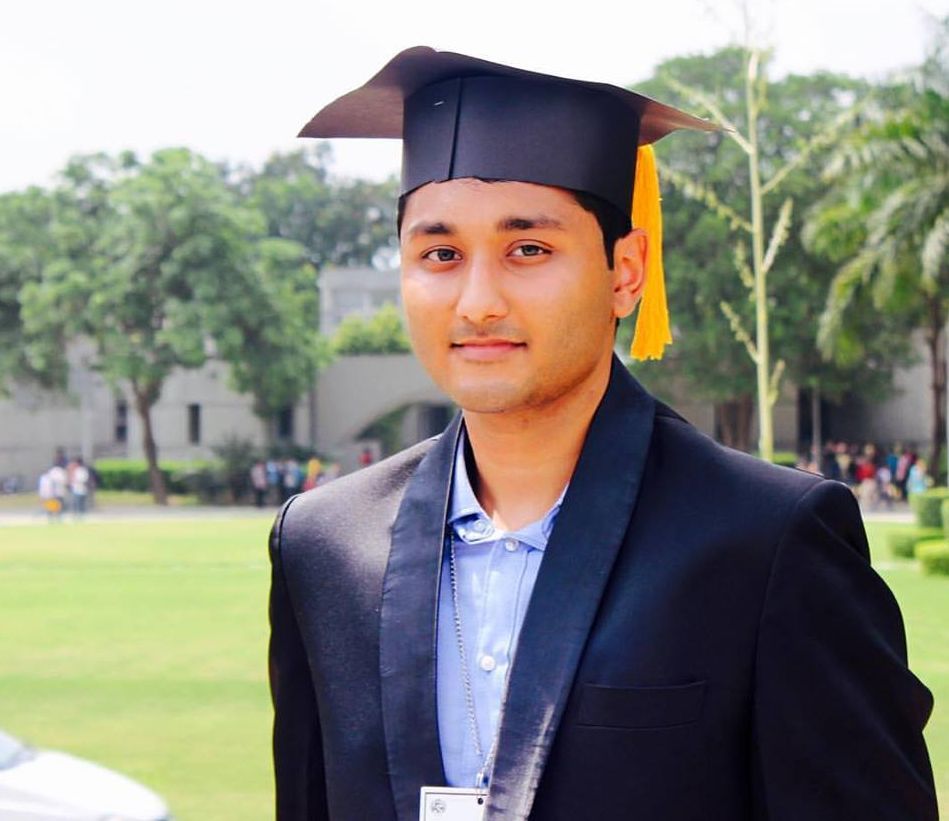 That happiness when you realize that finally its over and you don't have to attend classes anymore! | Photo: Fenil Shah

SS: You made your remaining two IM norms and also reached 2400 Elo within a year. How did you manage to do that?

FS: I always thought in the back of my mind that I had enough potential to reach the IM level, the only question was how much time would it take!

SS: What were some of the techniques, materials, etc. you used which could be useful to our readers?

FS: There is a lot of chess material available on internet these days which can be useful like the Quality Chess Books by GM Jacob Aagaard, Chessbase DVDs, Chess24 video series, Modern Chess Magazine (which can be useful to build up an opening repertoire), latest recommendations in various ChessBase Magazines (CBM) and Yearbook and I believe every passionate chess player must buy the New In Chess Magazine to stay in touch with the chess happenings. Though apart from these, one should work on their own but these open source materials can surely be taken as a starting point. Also some chess psychology books like Logical Decision Making by GM RB Ramesh and 7 Deadly Chess Sins by Jonathan Rowson can be very useful. 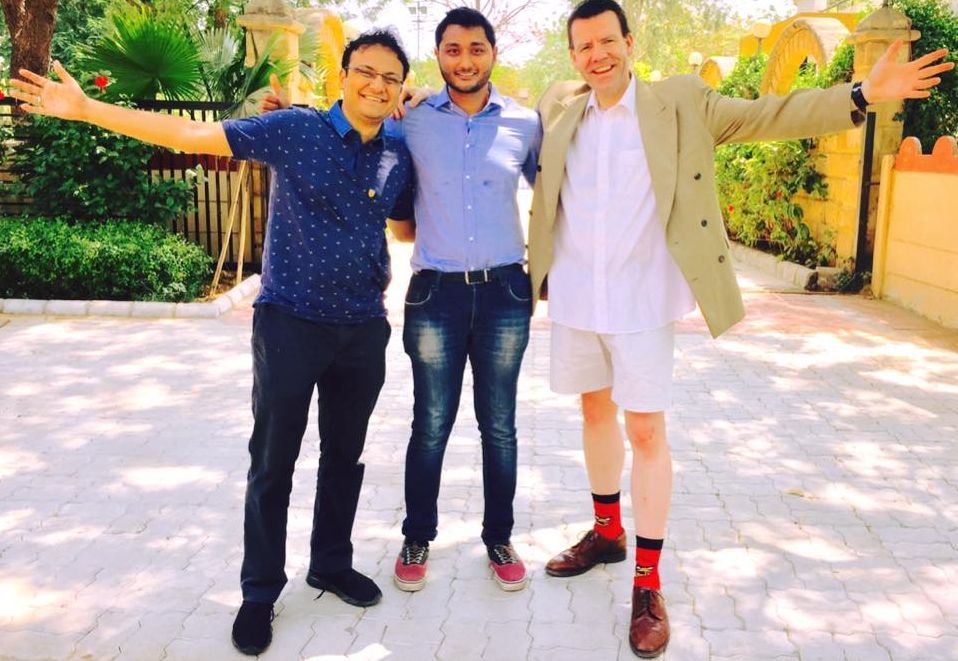 Happy people are always fun to be with! | Photo: Fenil Shah

SS: If you are pursuing chess, do you think you unnecessarily spent time for your educational degree?

FS: Life is a bit more complicated to be equated in terms of chess and education only. It’s much more than that.

SS: Do you think academics helps you in chess?

FS: It surely does. It’s both ways actually.

SS: According to you, did you make the right decision by leaving chess for education when you were at the height of your chess potential?

FS: Sometimes in life there are no right or wrong decisions, they are just different decisions. I’m surely proud of that decision and if I am asked to choose between these two decisions again, I would take the same decision in life. My perception towards life changed a lot in this phase and I grew as a person. As I said, life is much more than just to be equated in terms of education and chess. 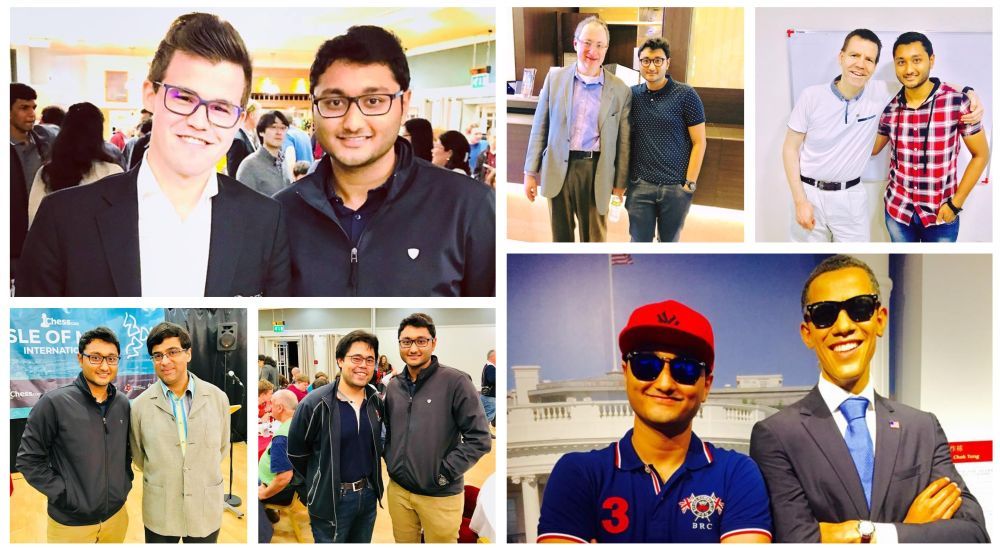 If you can spot the odd one! Level:0 | Photo: Fenil Shah Archive & FB

SS: In the past while playing you used to be extremely nervous and tensed, you used to shake your legs and almost your entire body. Now you look much calmer. How did you manage to achieve that?

FS: In the earlier days, I used to take losses very personally. I think after a certain age, you start comprehending that in sports, losses are bound to happen, you have to learn to deal with them in a mature way. Also, I started to mediate and yoga which helped me to become a lot calmer. 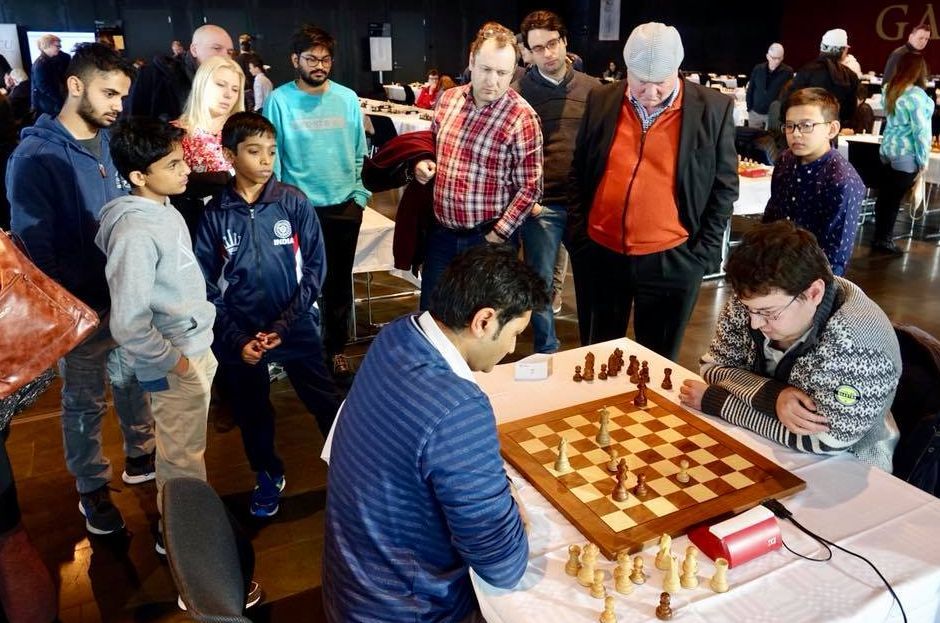 This one is from the Reykjavik Open 2018 , how many GM s and future GMs can you spot in this pic? | Photo: Fenil Shah

SS: Who are the people you would like to thank for your achievements?

FS: I would like to thank everyone who has been a part of my journey: my family - who has been like a constant pillar of support and inspiration in my whole journey; my coaches - without them I would not have been standing at this place where I am right now and my friends - who kept pushing me to fight in odd situations.

SS: What are your next aims?

FS: My next obvious aim in chess is to try to become a Grandmaster as soon as possible but I also have a distant dream of pursuing Masters abroad. Let’s see how things fall in place. 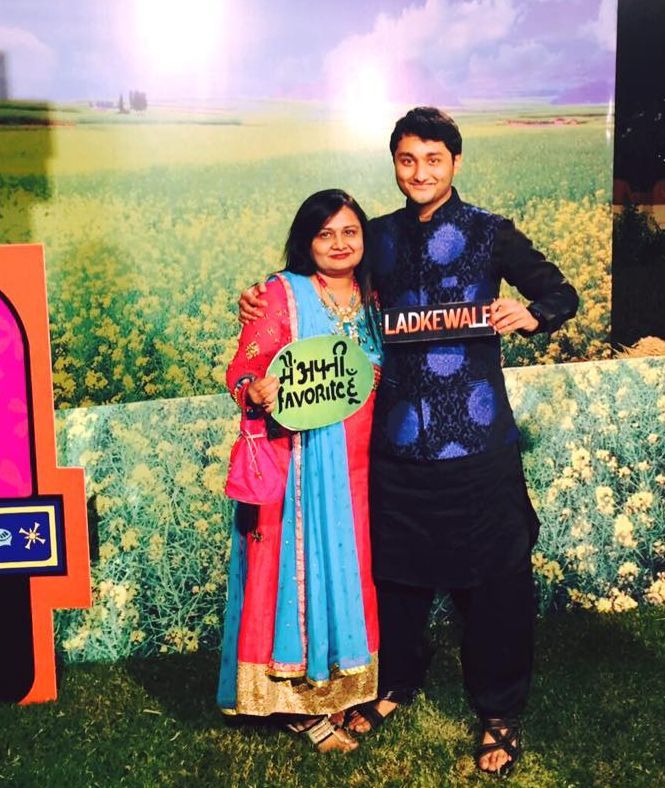 Life doesn't come with a manual but with a mother who is the most supportive person in the world! | Photo: Fenil Shah

Here is a game of Fenil Shah from Rilton Cup 2017 which he has kindly annotated for the readers of ChessBase India.

Fenil managed to achieve his goal of becoming an engineering as well as an IM. Now we are eager to see if he can acheive his Masters as well as his GM title! We wish the lad from Ahmedabad the best in his journey.