Ramco was the first sponsor of our chess icon Viswanathan Anand and now it sponsors the third youngest grandmaster R. Praggnannandhaa and his sister R.Vaishali. Not to forget it also sponsored the Indian team at the Olympiad this year. Ramco Institute of Technology International FIDE Rated Open Chess Tournament 2018 was held from 29th November till 2nd December, 2018. The event was organised by RIT, a popular engineering college in Tamil Nadu, run by the Ramco Group of Industries. A total number of 313 players took part in the event from all over India including 1 GM, 4 IMs and 2 FMs. Kunal M. of Tamil Nadu who started as the 6th seed clinched the title by scoring 7.0/8 points. Chief Arbiter of the tournament IA R. Anantharam send us a detailed pictorial report of the event.

The year was 1938. It was a time when the reverberations of the Industrial Revolution had not yet reached the interiors of South India. Despite scarce capital and resources, Mr. P A C Ramaswamy Raja (grandfather of Mr. P R Venketrama Raja, Hony. President of AICF) setup the first spinning mill at Rajapalayam, which later became the focal point of the Ramco Group. His sharp focus on technology and quality has inspired a generation of entrepreneurs and formed the basis for the collective vision of the Group. 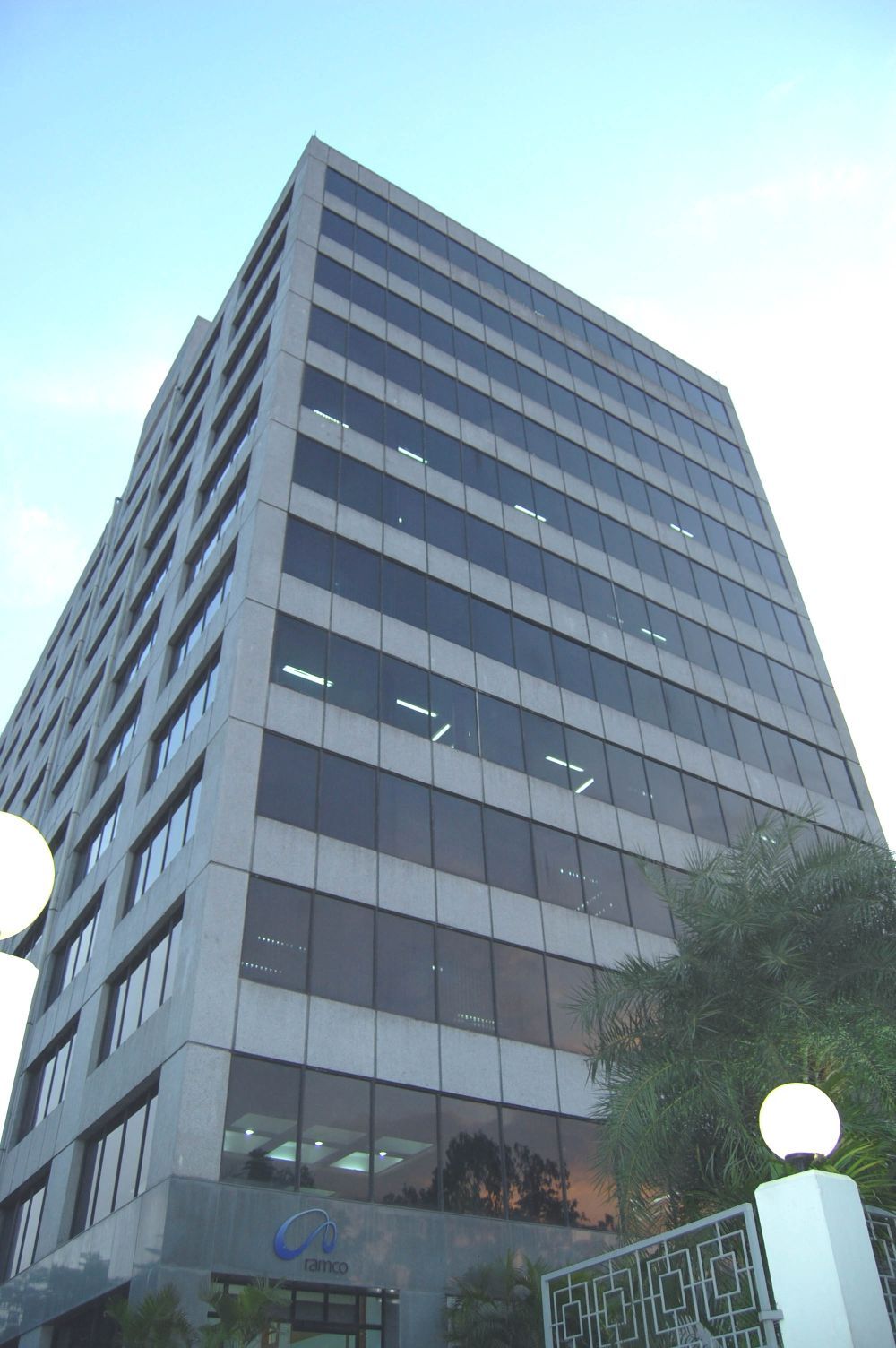 Under the leadership of his son, late Chairman, Mr. P R Ramasubrahmaneya Rajha, the Ramco Group has expanded into a USD 1 Billion industrial conglomerate with interests spanning across cotton and synthetic yarn, cement, building products, software solutions, wind-energy, bio-technology and more. Today, with steadfast focus on R&D and innovation, Mr. P R Venketrama Raja, Hony. President of AICF, has been steering the Group to become one of the most reputed business houses and achieve global recognition for its quality products and services. 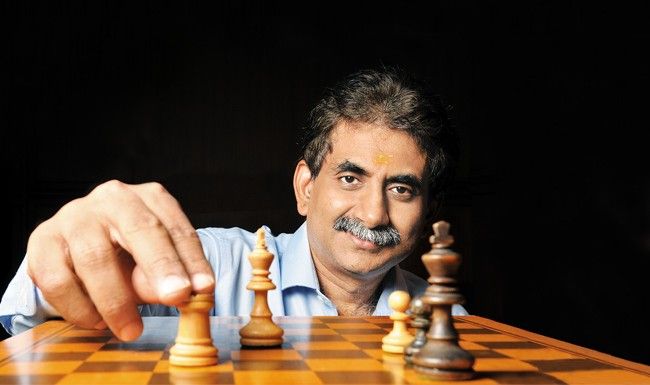 Ramco Institute of Technology International FIDE Rated Open Chess Tournament 2018 was held from 29th November till 2nd December, 2018. The event was conducted by Ramco Institute of Technology, Chennai. The top seed of the event was GM R.R. Laxman of ICF followed by IM Harikrishnan.A.Ra of Tamil Nadu and IM Muthaiah Al of Tamil Nadu. On the whole, more than 300 players from Tamilnadu, Kerala, Pondichery and other parts of India participated in this 4 day tournament which carried a total prize fund of Rs. 5,00,000. 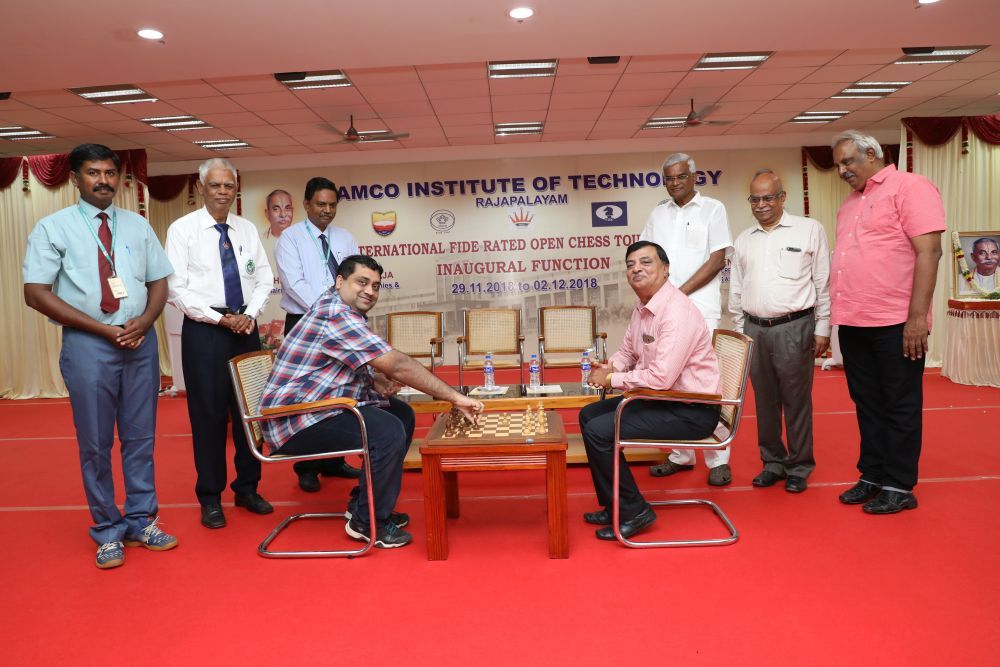 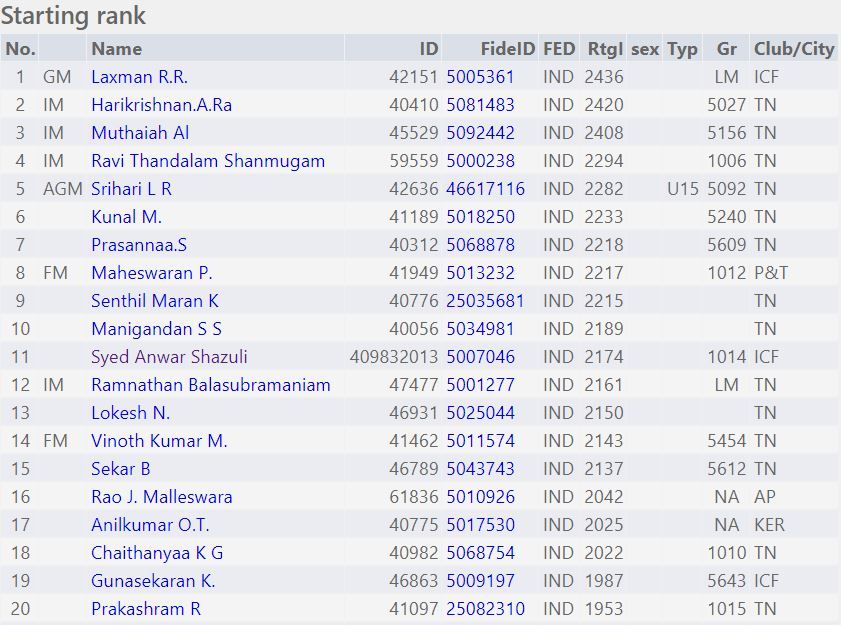 At the end of the last round as many as 4 players were tied for the first place with 7.0/8 points but ultimately the title went to IM-elect Kunal M. of Tamil Nadu who had a better tie-break score than the rest. Kunal started as the 6th seed and remained undefeated throughout the event. He increased his rating by 25 Elo and cashed home Rs. 70,000 as the first prize. Second and third position went to IM Harikrishnan.A.Ra and Syed Anwar Shazuli who received Rs.50,000 and Rs.35,000 respectively. 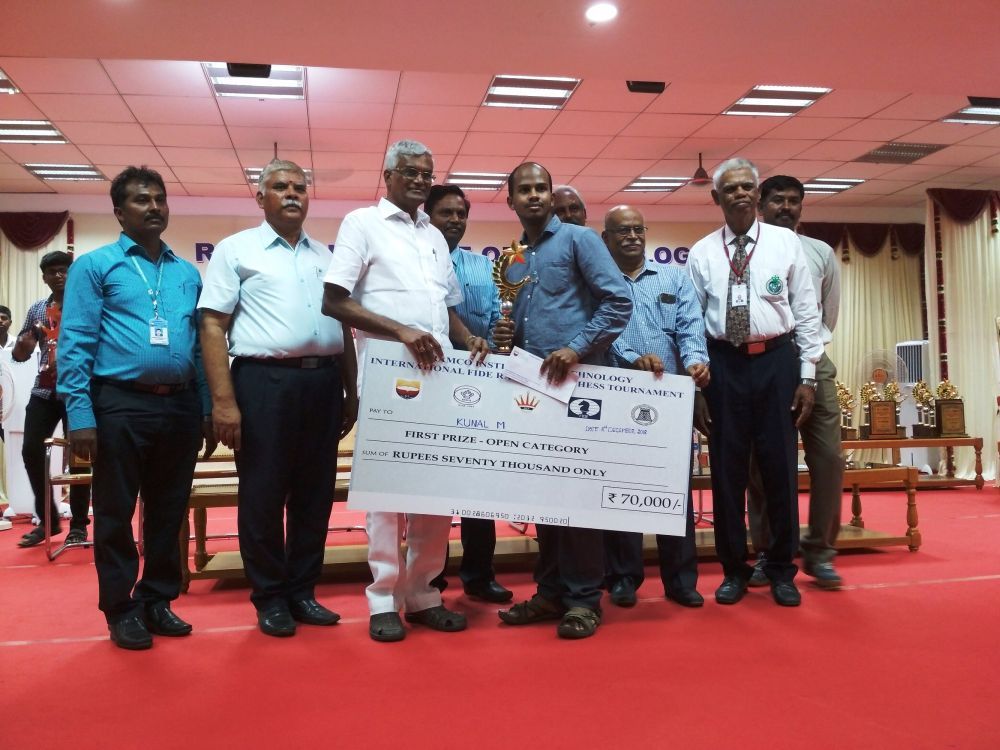 Winner M. Kunal receives his prize from Sri A. Gopalsamy, President of Virudhunagar District Chess Association. | Photo: R. Anantharam
Did you know Kunal has all the three norms for becoming an IM and had reached a career high Elo of 2399. From there he is down to 2200s, but just have a look at his positivity in the video! 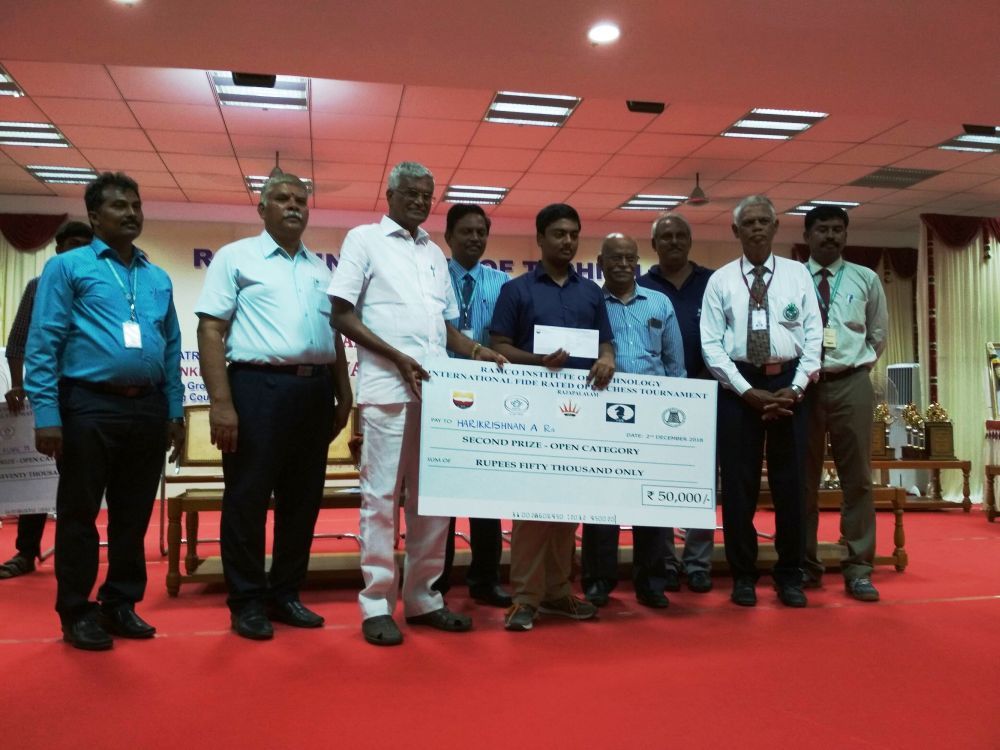 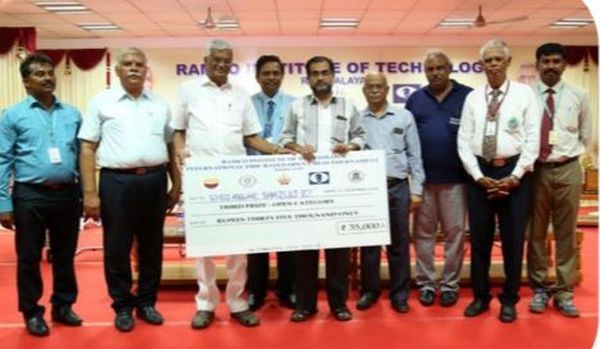 Former U-10 National Champion Syed Anwar Shazuli started as the 11th seed and went on to register the 2nd runners up spot. | Photo: RIT

The playing ambience was excellent – only 313 players occupied the spacious hall where about 900 to 1000 players can easily play. Players were accommodated in the hostel with star hotel quality beds and free food was offered to all the players which was hygienic and of high quality. 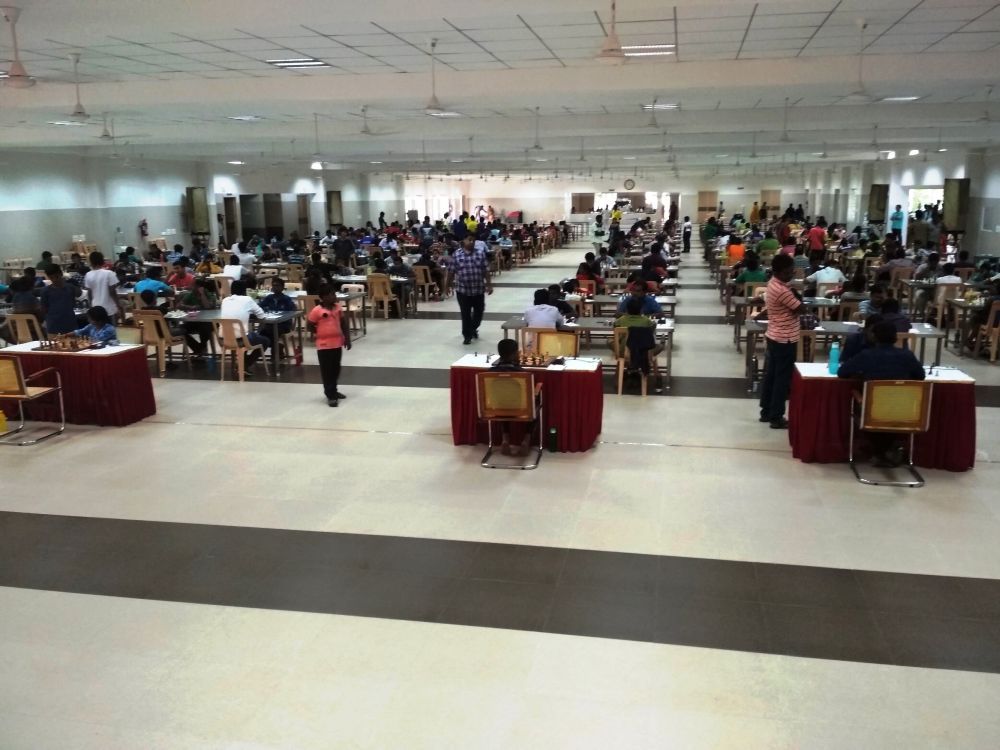 The spacious venue of the event. | Photo: R. Anantharam 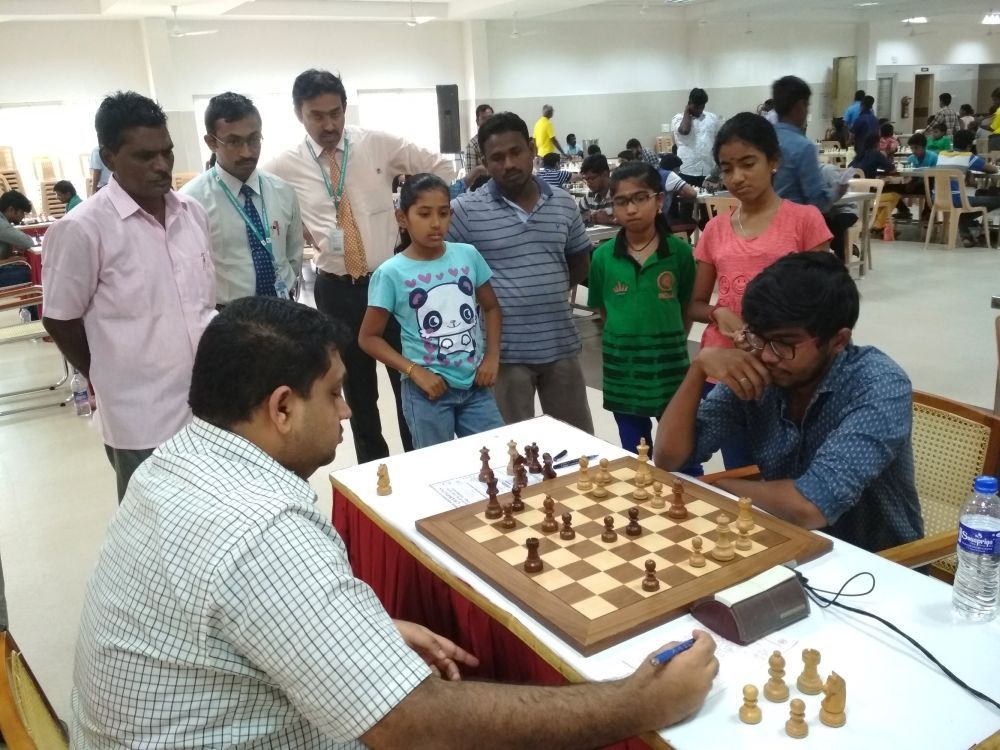 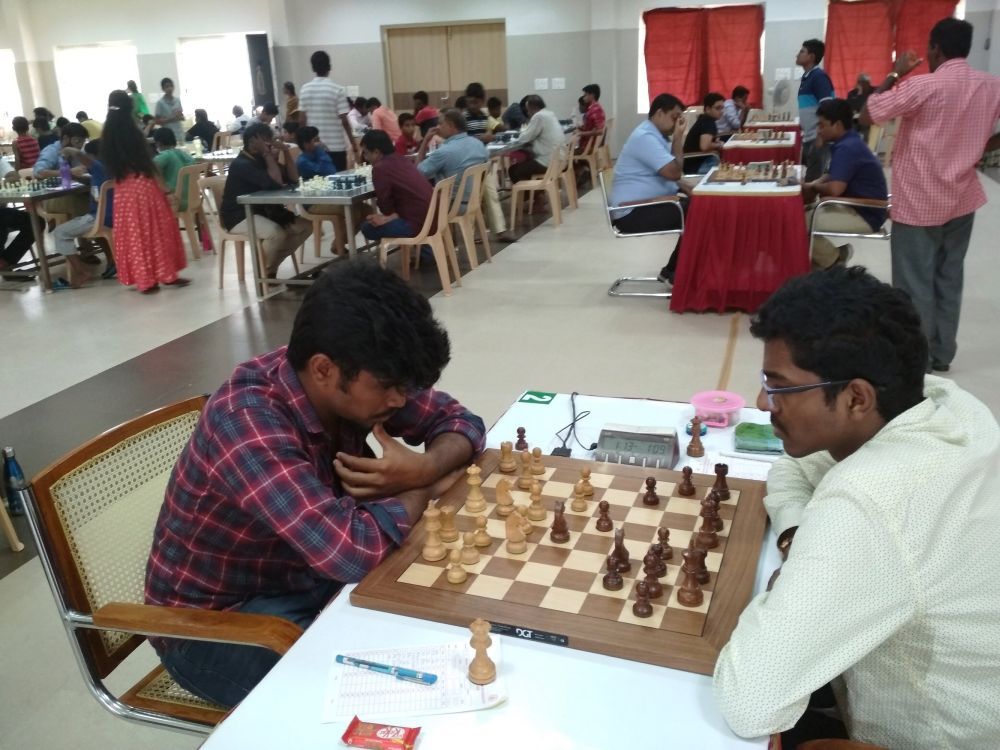 Earlier the event was inaugurated by P Stephen Balasamy, General Secretary, Tamil Nadu State Chess Association. The parents were also escorted to the nearby Ayyanar falls, situated at the footstep of the western ghat about six km from the college. One can sight the elephants in the night and if anybody is interested in spotting wild animals, they have to climb up the hills. The jungle stream and the serene beauty of the area make it a good picnic spot. 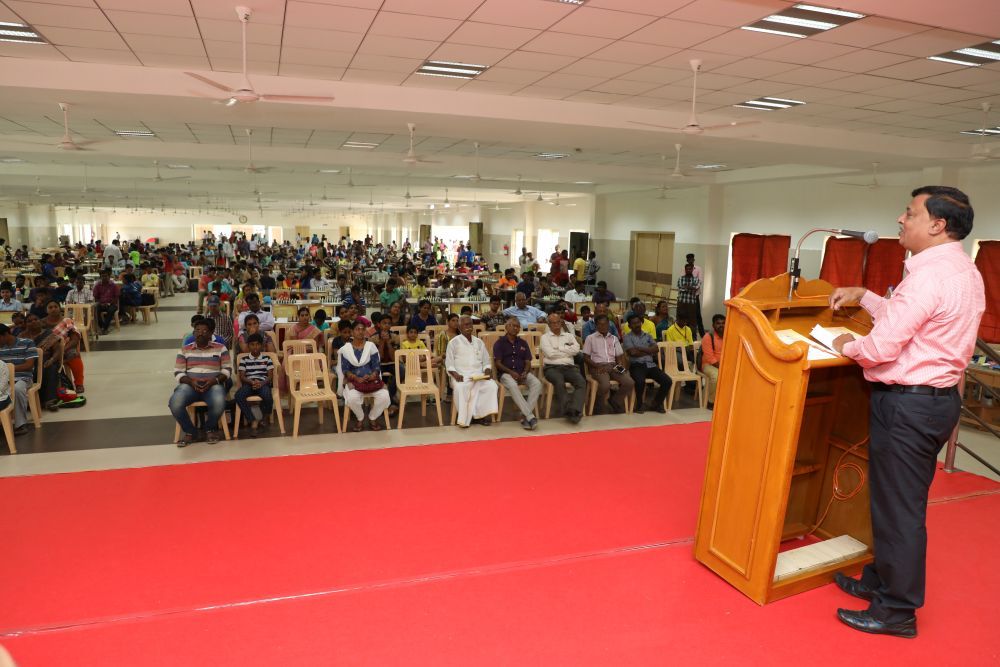 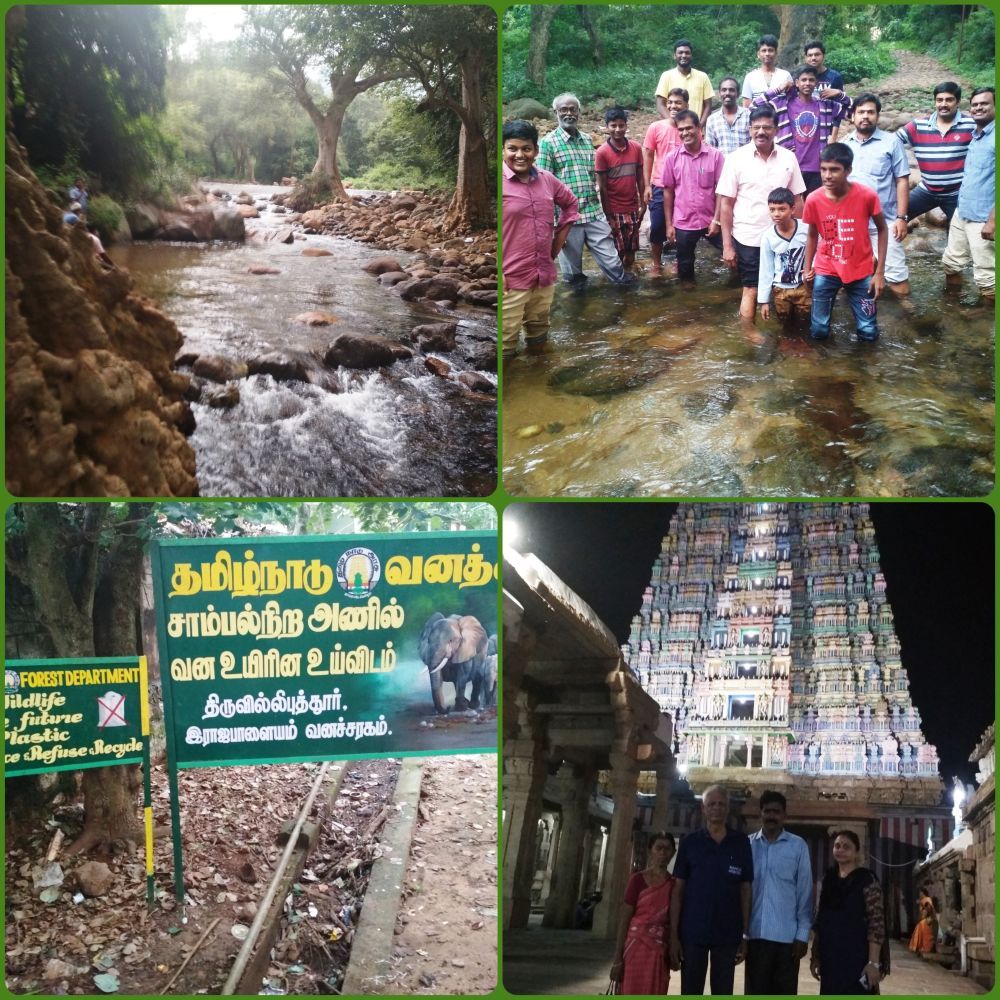 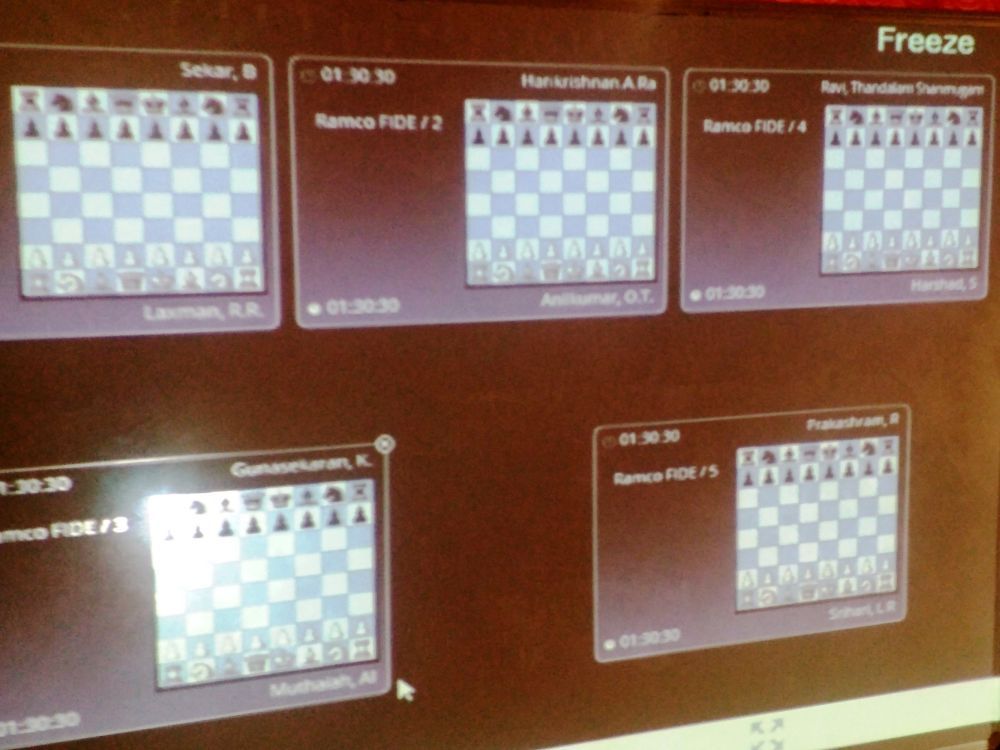 Live games were arranged for parents in the waiting hall! | Photo: R. Anantharam 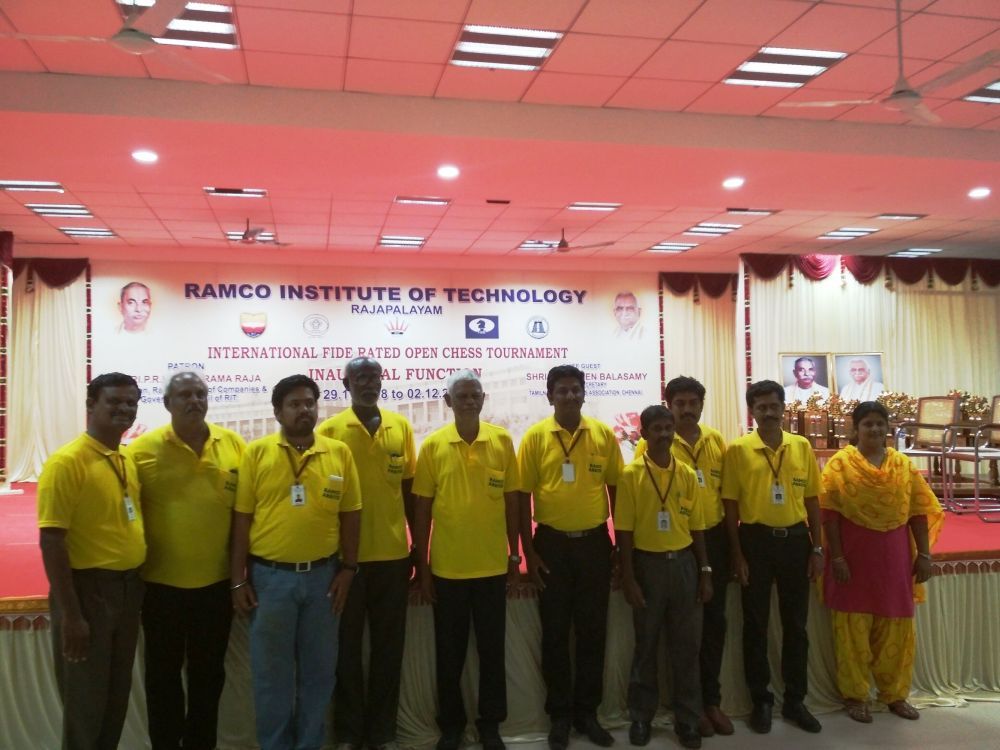 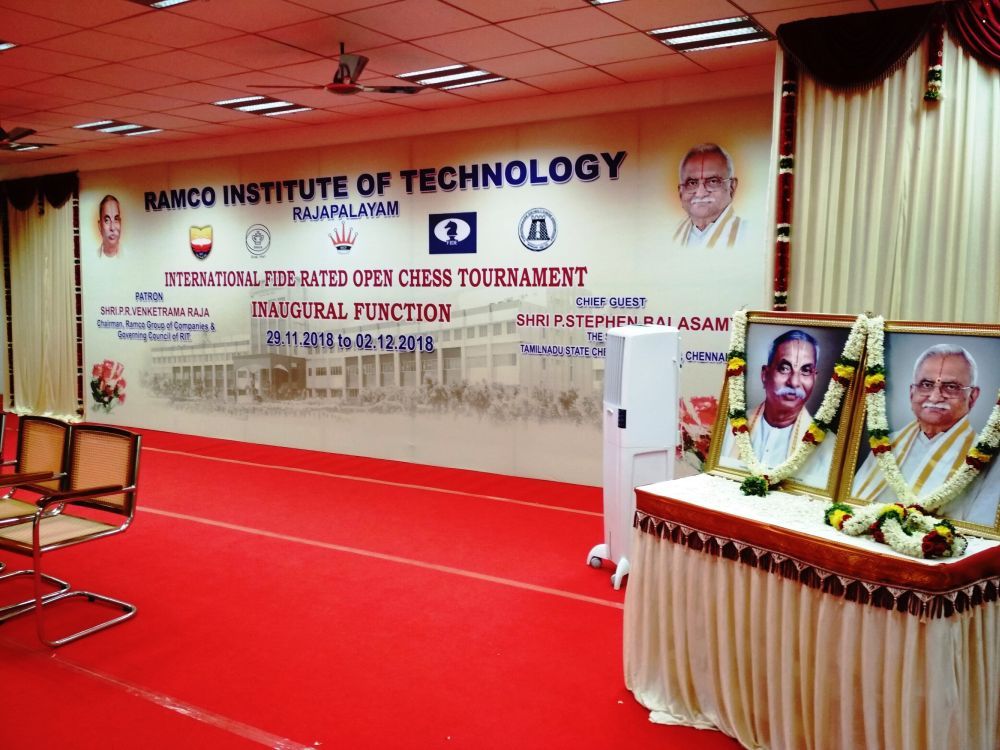 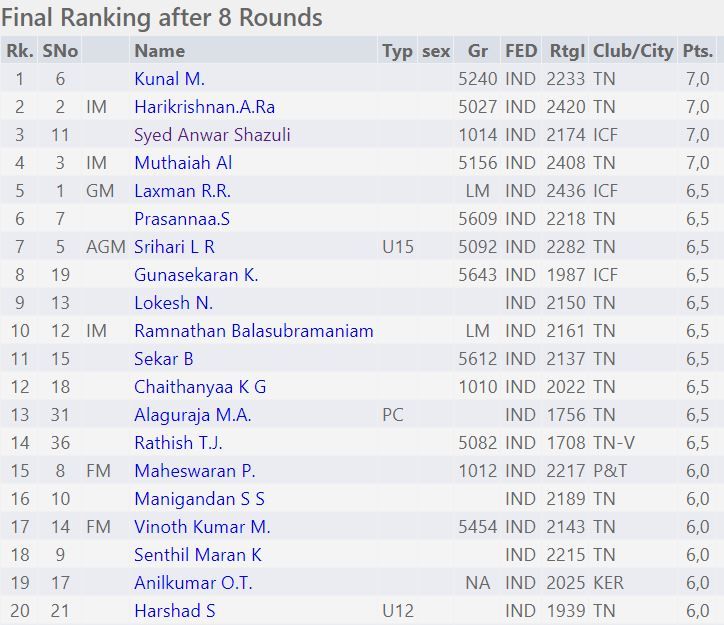 Play through the games of the event from here

Personal interview with one of India's finest arbiters!