IIFLW Mumbai Round 6: Deepan and Abhijeet pull off a miracle!

The sixth round of Eka by IIFIM Mumbai International Chess tournament 2017-18 turned out to be a nail-biting affair. Overnight leader, Deepan Chakkravarthi won a crazy game against Adam Tukhaev to retain his tournament lead. GM Abhijeet Gupta had to walk a tightrope in his game against Shakil Abu Sufian but managed to pull out a win while 11-year-old Pranav held Deviatkin to a draw. In the Juniors' group, although the draw between the leaders, Aaryan Varshney and Nikhil Magizhnan was an exciting one, it allowed three more players to catch up with them. We have a report with games, pictures, and analysis.

Round 6 of the 3rd Mumbai IIFL International Chess Tournament abound with fascinating chess. On the top table, Deepan Chakkravarthy and Adam Tukhaev played Fianchetto variation of the King's Indian Defence and reached an utterly mad middlegame where the Ukranian GM managed to get an edge out of the opening. The position, however, was so complicated that the evaluation kept changing like quicksilver.

By the 25th move, Tukhaev had sacrificed an exchange and had successfully imprisoned the white queen in his base camp. Soon, the black bishops were positioned menacingly and on move 5l, trying to make the most of his advantage, Tukhaev sacrificed his two minor pieces for Deepan's rook. Given that he had already sacrificed an exchange earlier, this meant that he was now a full piece down. But as compensation, he had three pawns and it looked more than enough for the Ukranian GM to win. 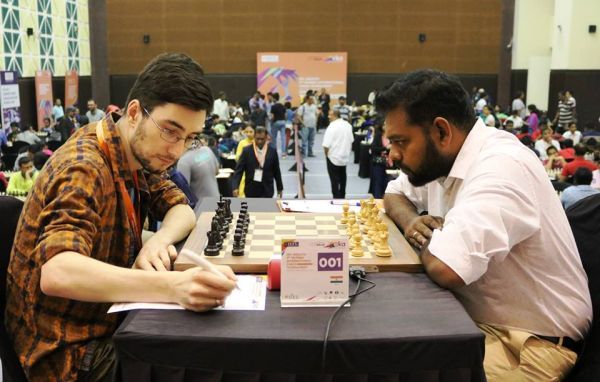 The Rajinikanth of Indian Chess played for so long that seasons changed outside the window! | Photo: Niklesh Jain

However, as Chakkravarthy said after the game, "a piece is a piece". Tukhaev's advantage began evaporating soon. Within just a few moves, the silicon monsters changed the evaluation from better for black to equal to winning for white. With his extra piece, Chakkravarthy began harvesting Tukhaev's pawns one after another and after 79 long moves, Tukhaev was on his knees. 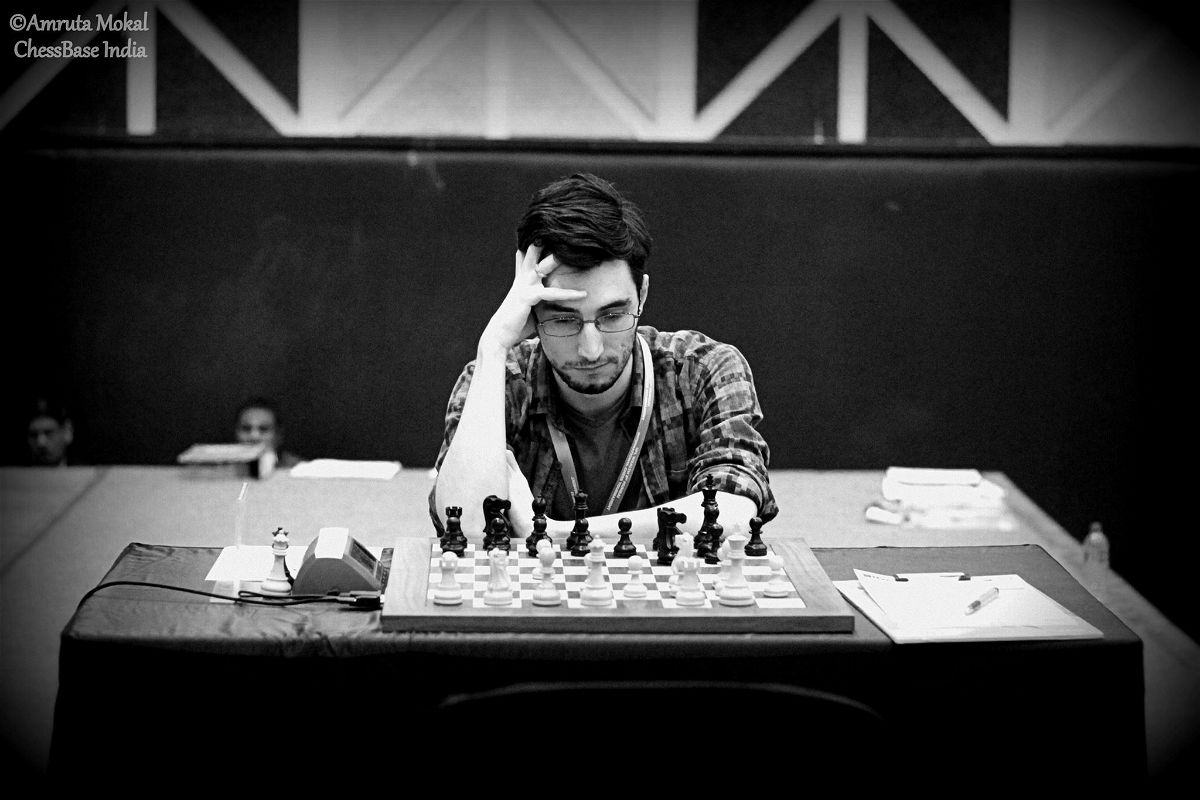 The defending champion desperately wanted to snatch the lead, but it was not to be! | Photo: Amruta Mokal 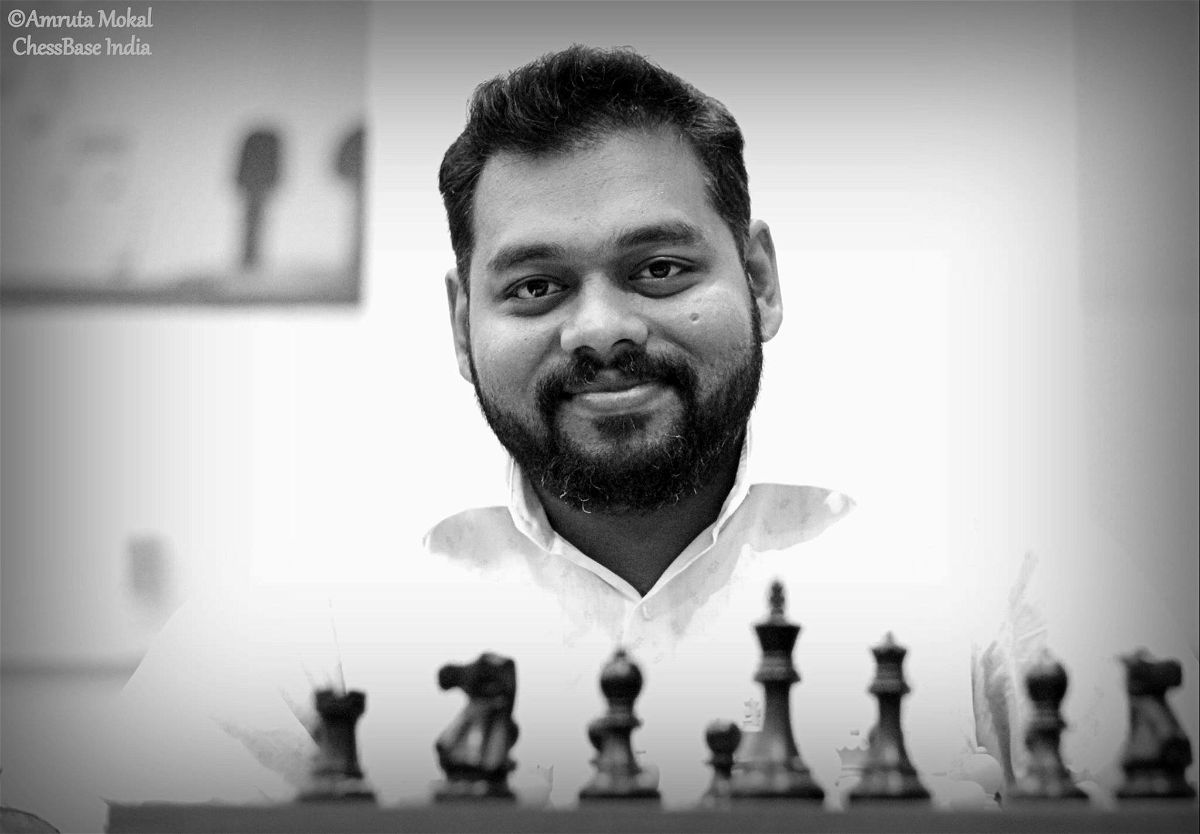 The top seed of the tournament, GM Abhijeet Gupta had to walk a tightrope in his sixth round game against Bangladeshi International Master, Shakil Abu Sufian. Playing from the white side of a Modern Benoni, Abhijeet stumbled in the opening and was struggling through most part of the middlegame. By the 26th move, he was already a couple of pawns down. 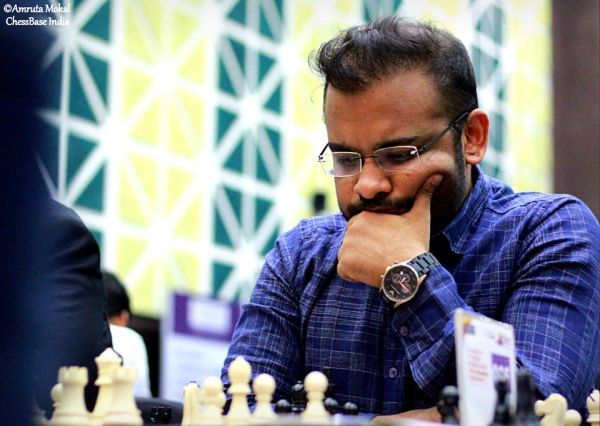 Abhijeet Gupta's sixth-round win was so magical that it could put even Hogwarts graduates to shame | Photo: Amruta Mokal

But as play progressed, his Bangladeshi opponent began playing passively. It seemed to Abhijeet that his opponent was just playing for a draw and this should be punished even if he had to play a very long game to accomplish it. After around six long hours, Abhijeet's efforts were rewarded when his opponent misjudged the ensuing king and pawn endgame that arose after a queen exchange on move 54. Just eight moves later, it was all over.

ChessBase India's Hindi Editor-in-Chief, Niklesh Jain, caught up with Abhijeet after the game

After a sparkling win against Srija Seshadri yesterday, the blindfold king of chess, Timur Gareyev, played another spectacular game against IM K Rathnakaran. Things went wild right out of the opening as Gareyev, with the black pieces, played g6 on his second move in an open Sicilian. Seeing an opportunity to get things complicated, Rathnakaran too went straight for the kill with 3.h4 to attack black's kingside. 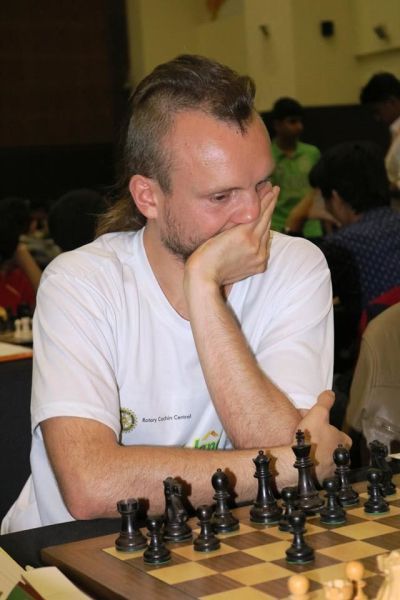 After his King's Gambit against Seshadri yesterday, Timur Gareyev had another surprise in a Sicilian for... | Photo: Niklesh Jain 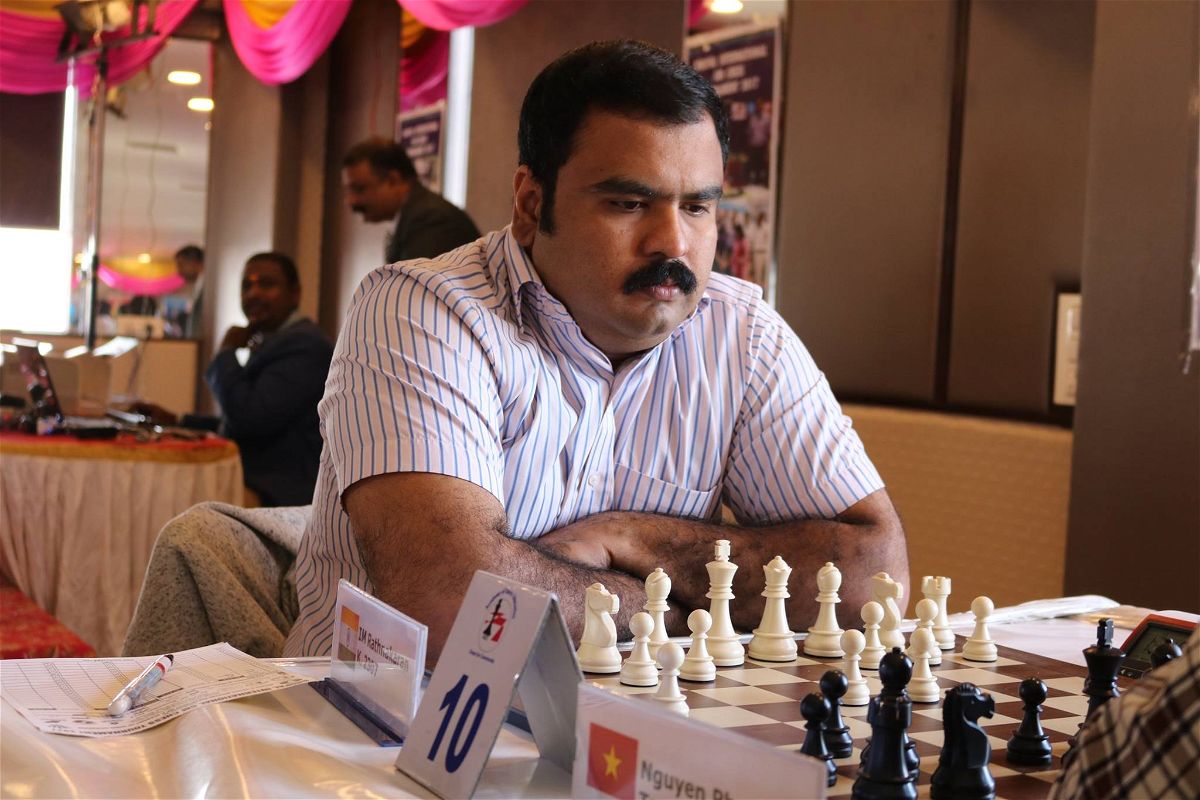 After the opening phase of the game, it seemed Gareyev had come out on top and had attained a much better position. A few moves later, however, his advantage had evanesced. Trying to keep things complicated, Gareyev sacrificed an exchange but Rathnakaran returned it almost immediately and maintained equilibrium. On the 41st move, players signed the truce after a move repetition. 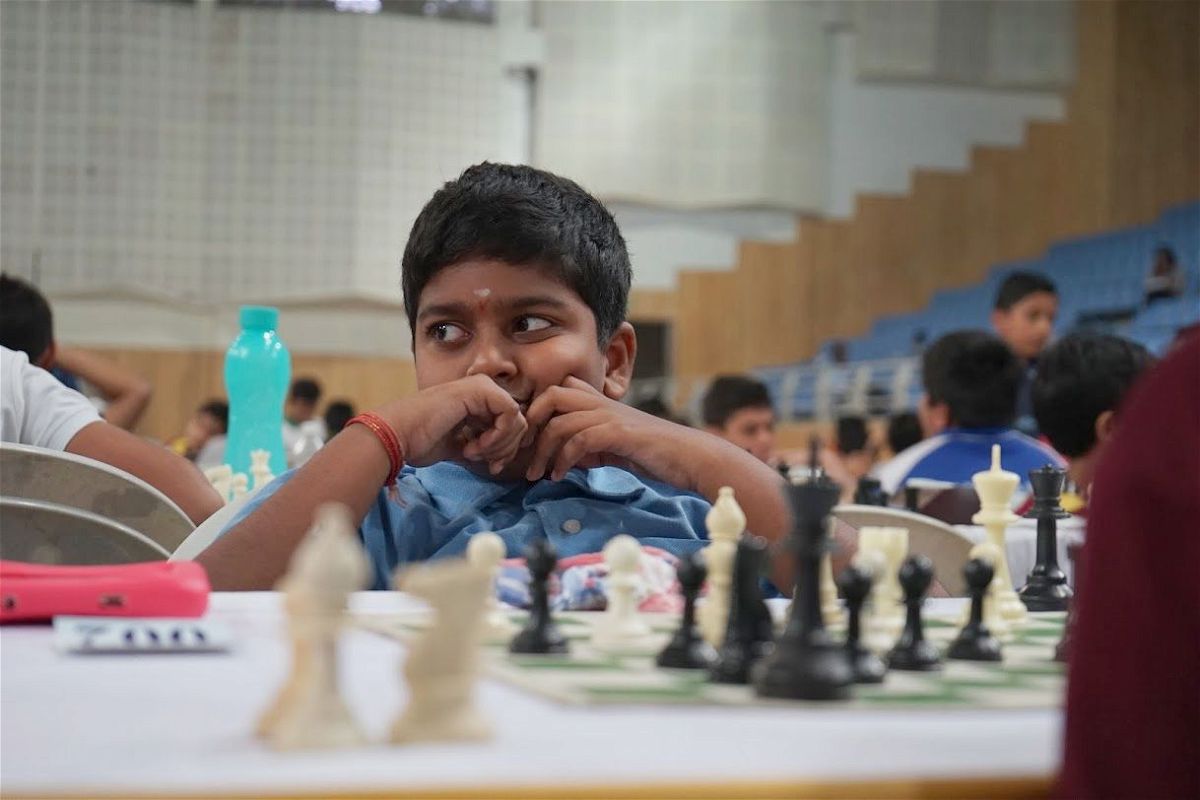 Young prodigies from India are proof that India is definitely going to be a chess superpower in the not so distant future. In round 6, the 11-year-old prodigy from Chennai was able to get a dominating position against the strong Russian GM Andrei Deviatkin. Play kicked off with the Torre attack in which Pranav had the black pieces. Out of the opening, the Chennai boy was able to neutralise comfortably.

On the 34th move, Deviatkin tried to open up black's king by sacrificing a pawn but soon, the boot was on the wrong foot. On move 43 Deviatkin missed a tactical shot that cost him a second pawn and put Pranav in a dominating position. Deviatkin won his pawn back a few moves later but the evaluation of the position still favoured the Chennai kid. However, in winning this pawn, Deviatkin had also created an outside passed pawn for himself and this turned out to be a good source of counterplay. The 54th move of the game saw an exchange of Pranav's passed queen-pawn with Deviatkin's queen-rook pawn. Pranav still had an extra pawn on the board but the presence of rooks in the game made the defensive task of Deviatkin much simpler. A few moves later, players decided to split the point and call it a day.

In the juniors' group, the sixth round witnessed a battle between the two tournament leaders, Aaryan Varshney and Nikhil Maghizhnan. Play kicked off with the Queen's Indian Defence in which Varshney had the white pieces. Queens were traded early in the game and, as play progressed, all pieces except rooks were traded off. 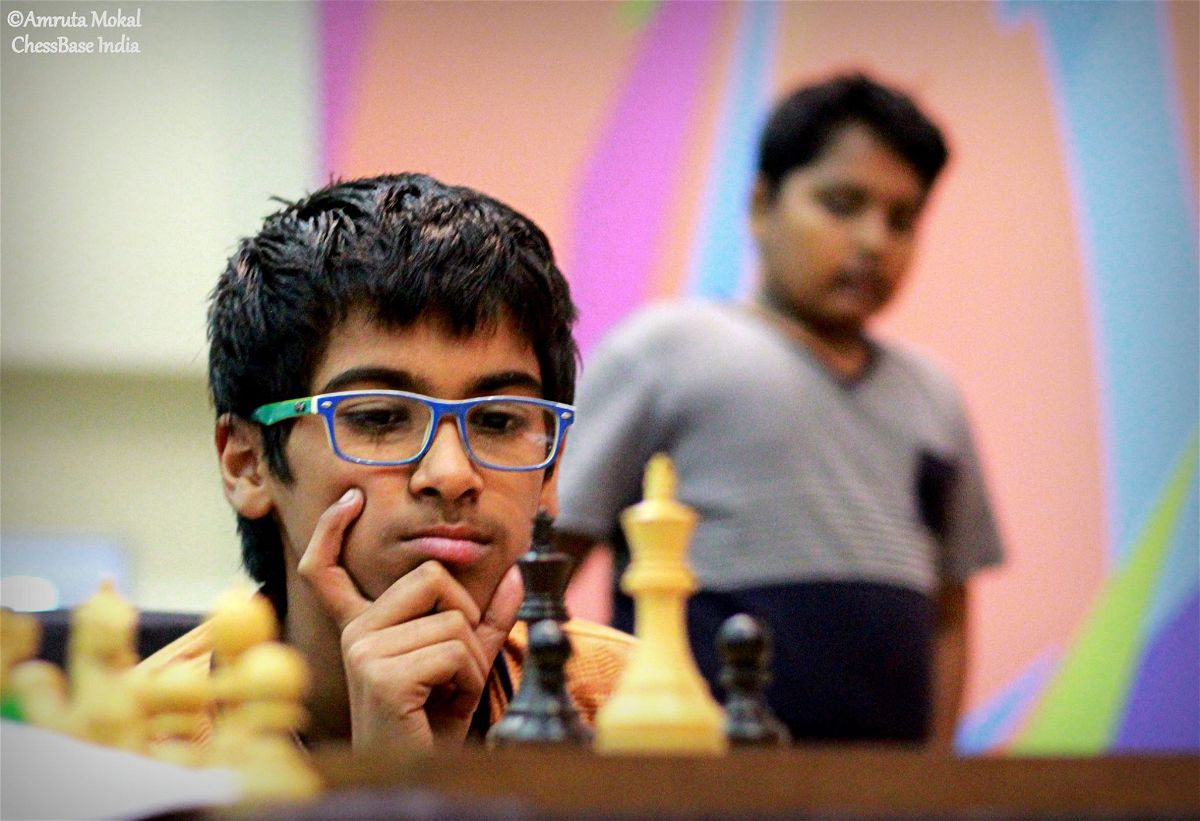 Varshney had an extra queen rook pawn in the rook endgame that followed and tried really hard to win. He would even have succeeded had he not missed exchanging his pawns on g5 instead of going all out for queening his pawn. In the line Varshney played, he gave his opponent two connected kingside passers as compensation for his rook. Magizhnan made the most of it by rolling them down the board and clinging on to a draw by forcing a stalemate at the end.

This draw allowed D Gukesh, Srihari LR and Pranav V to catch up with the leaders by winning their games. Moreover, a battalion of eleven players is sharing the second spot with a score of 5.0/6. After six rounds, five players are tied for first in the Juniors section and the tournament is wide open with three rounds to go.

Some of our favourite photographs from round 6: 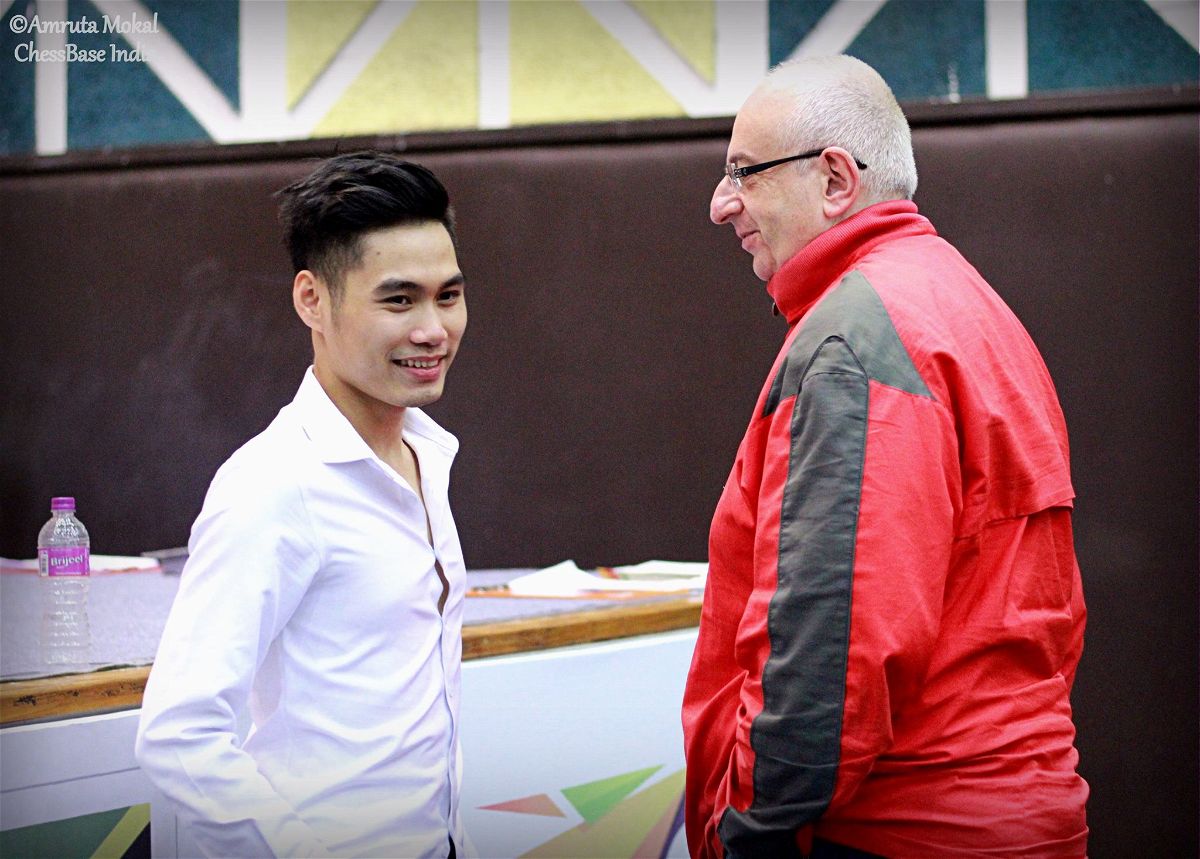 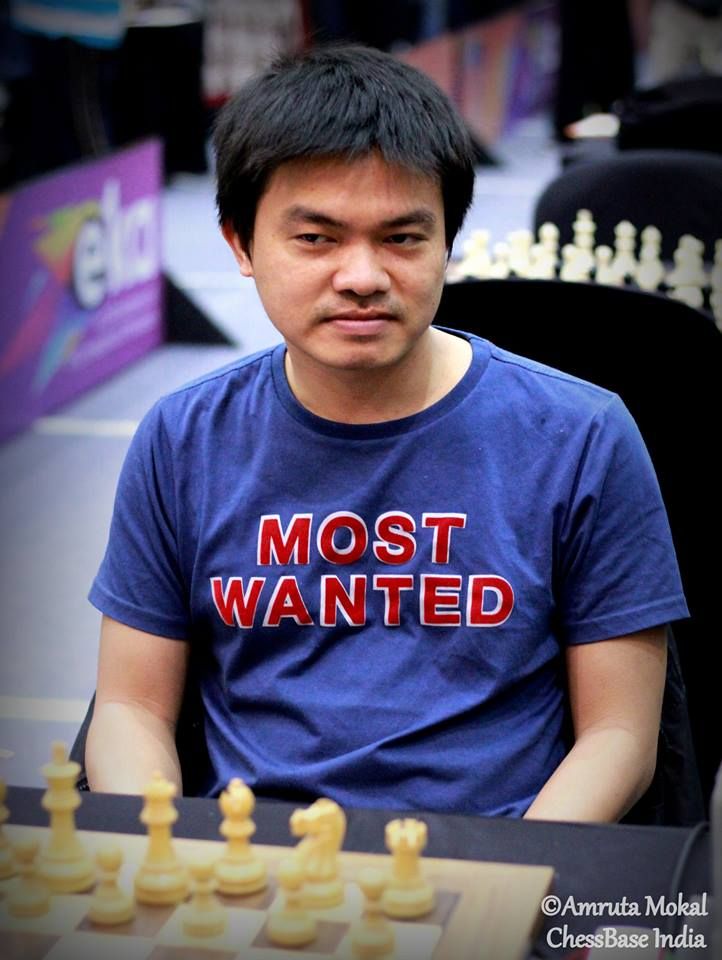 When you win three grandmaster events back to back, you are definitely one of the most wanted people! | Photo: Amruta Mokal 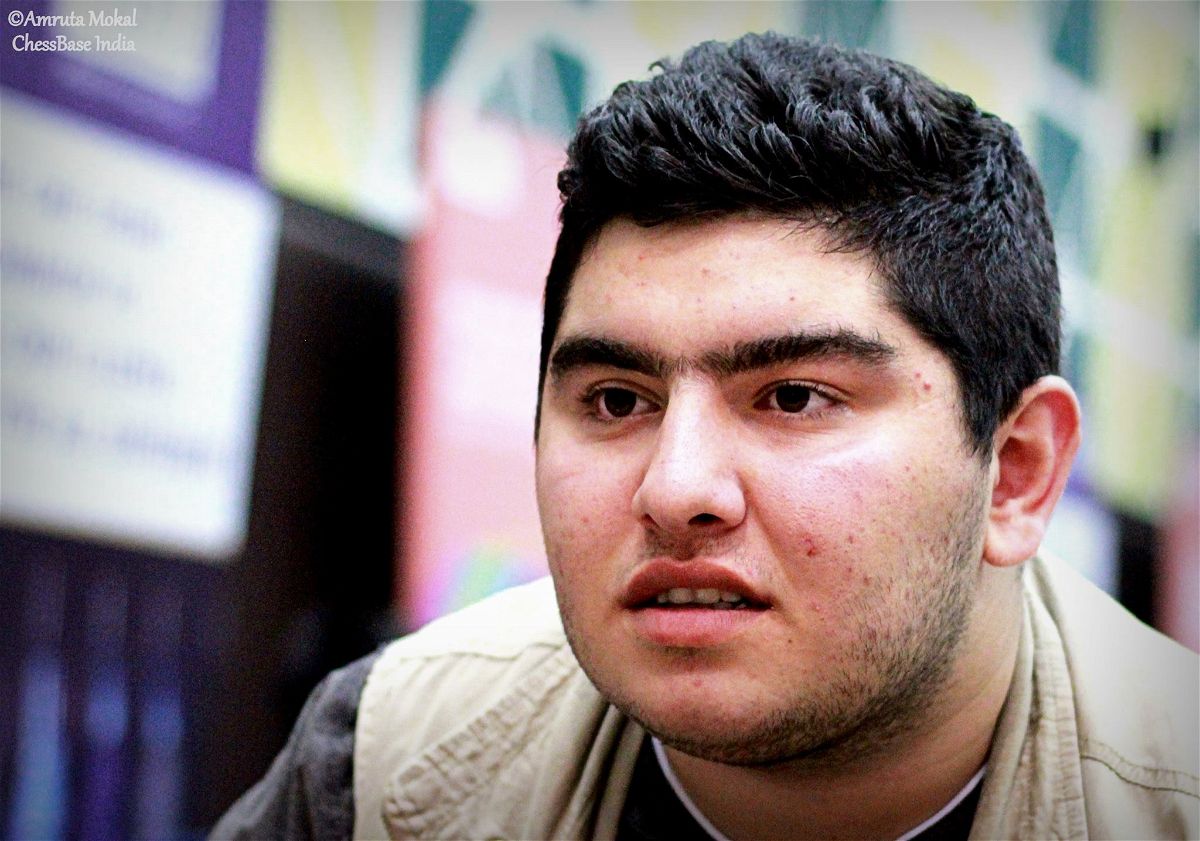 Parham Maghsoodloo is half a point behind the leader, but we have the feeling that his best is yet to come! | Photo: Amruta Mokal 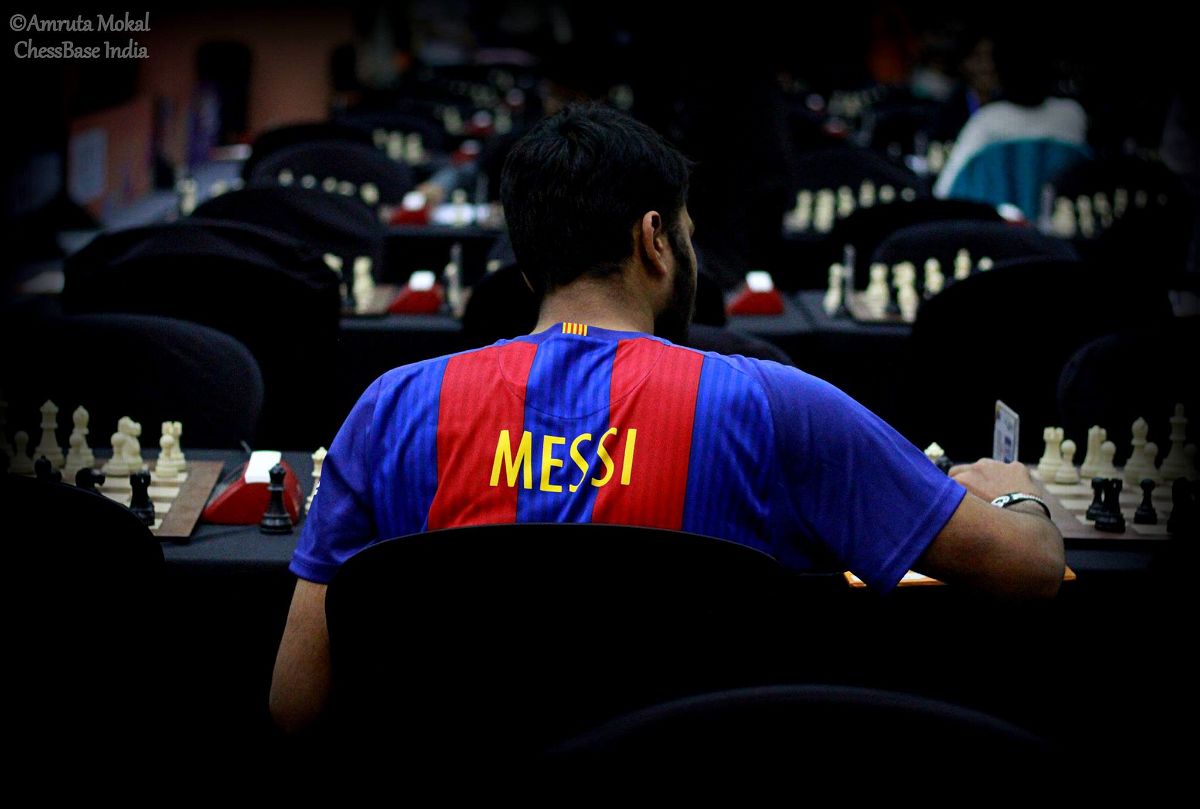 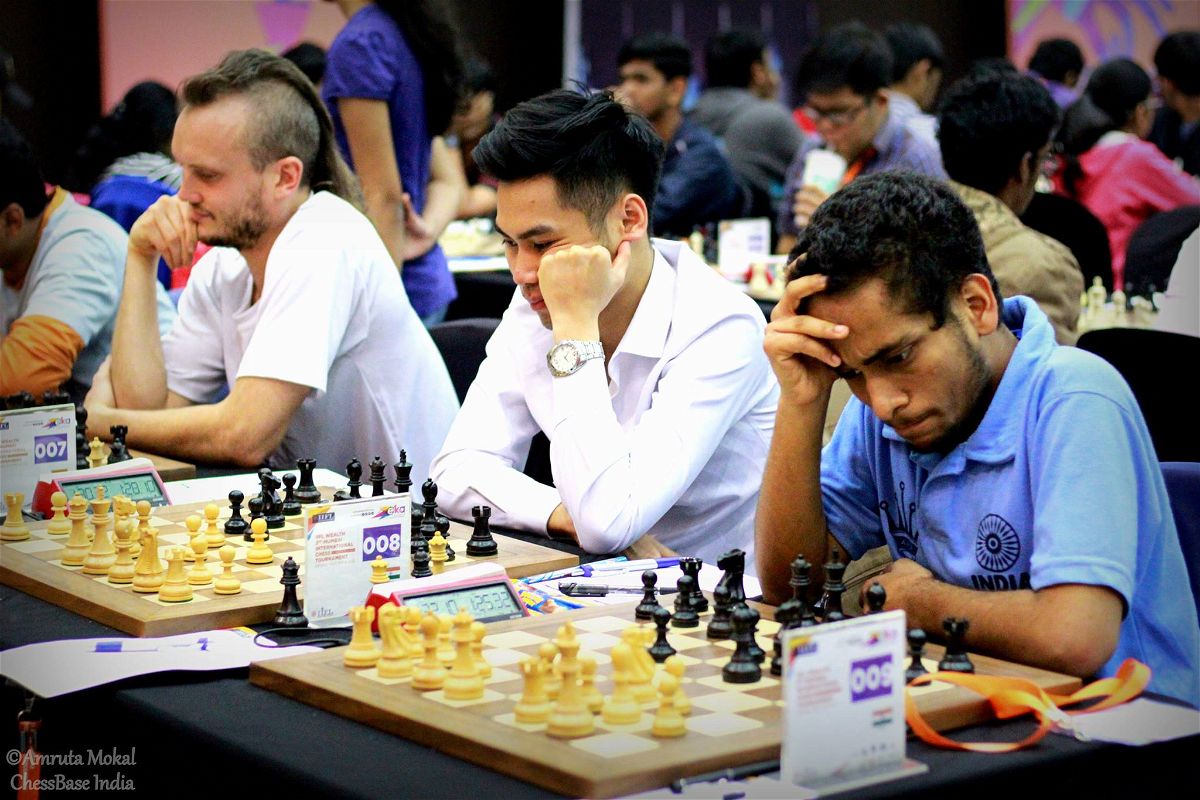 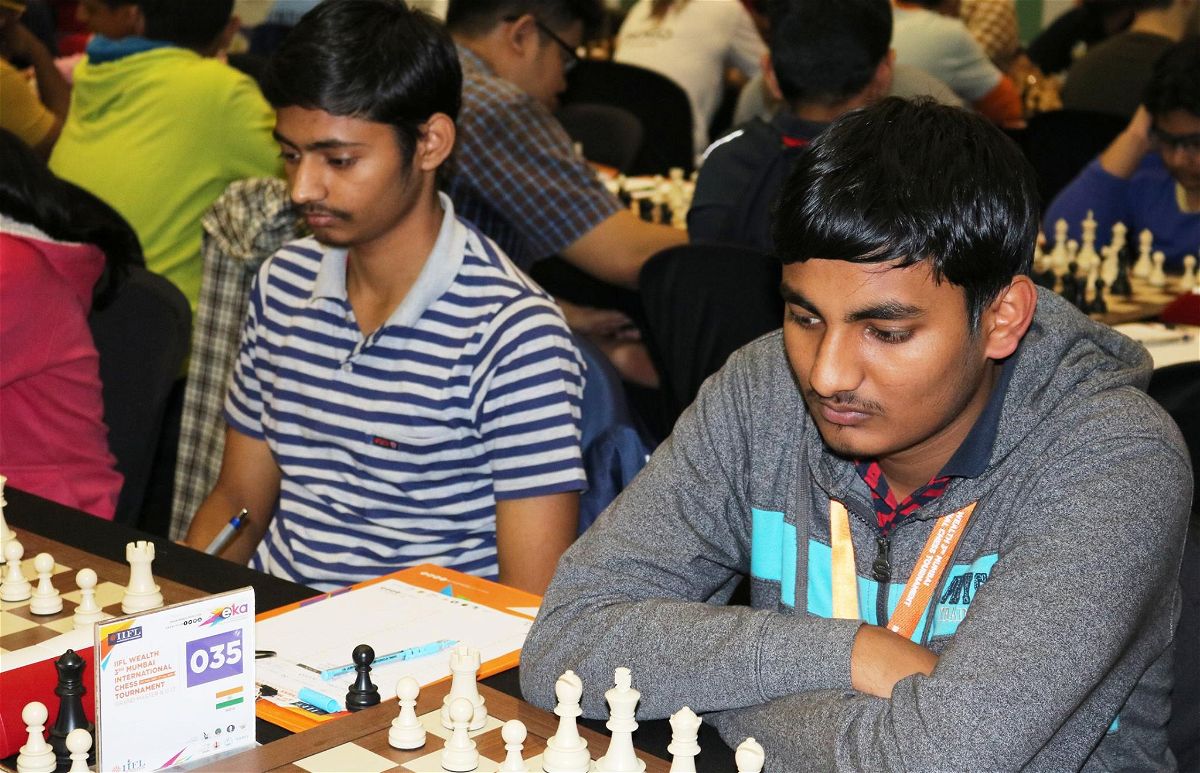 Siblings from Bihar Kumar Gaurav (left) and Saurabh Anand are hoping to be the first titled players from their state | Photo: Niklesh Jain 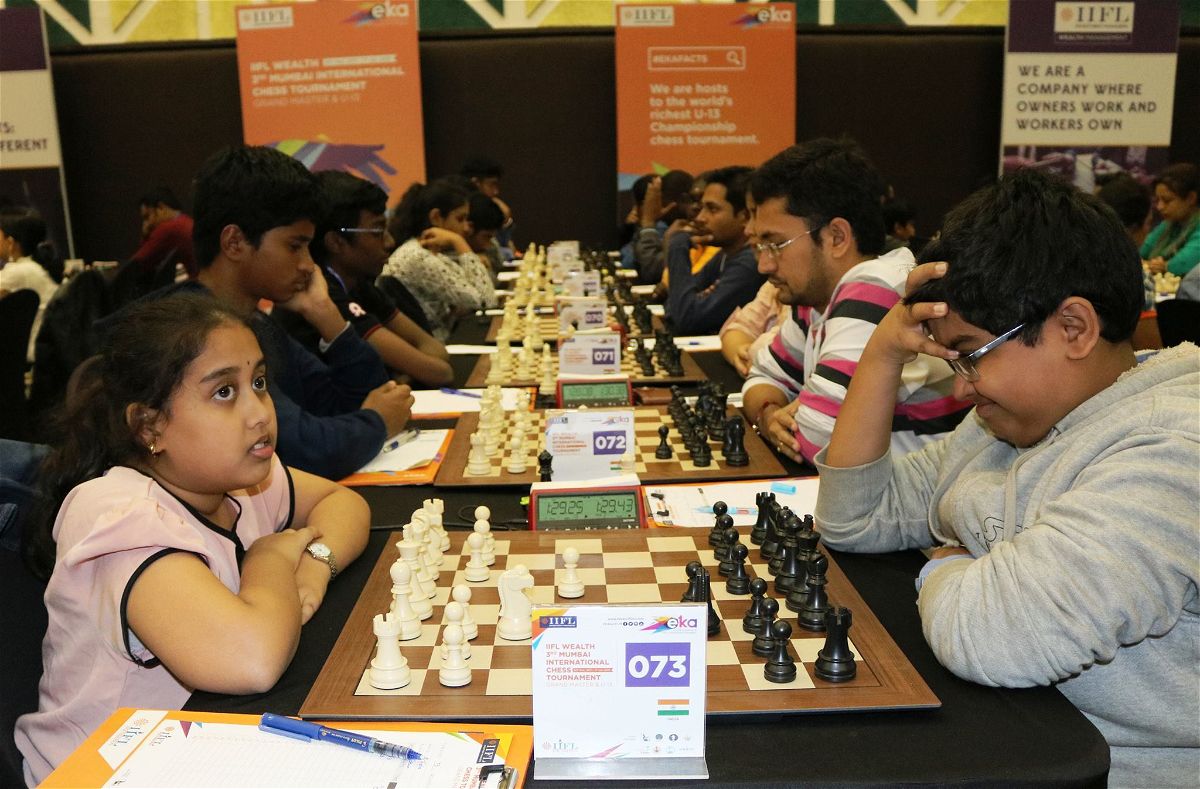 Siblings Trish and Tarun Kanyamarala playing hard against each other | Photo: Niklesh Jain

There is a lot to learn from the Kanyamarala siblings. Both of them are playing in the under-13 and open section. Naturally, they were tired and could have taken a short draw when facing each other. Besides they had already faced each other in Bhopal and had played out a fighting game. Tarun and Trisha fought their mental demons and decided to once again sit opposite each other for a full-fledged fight. Tarun won his game, but both of them became mentally stronger.

The fighting spirit of Tarun and Trisha reminds us of the Facebook post written by Sagar Shah after he had faced his wife Amruta Mokal over the board in 2016 at the Leiden Open. 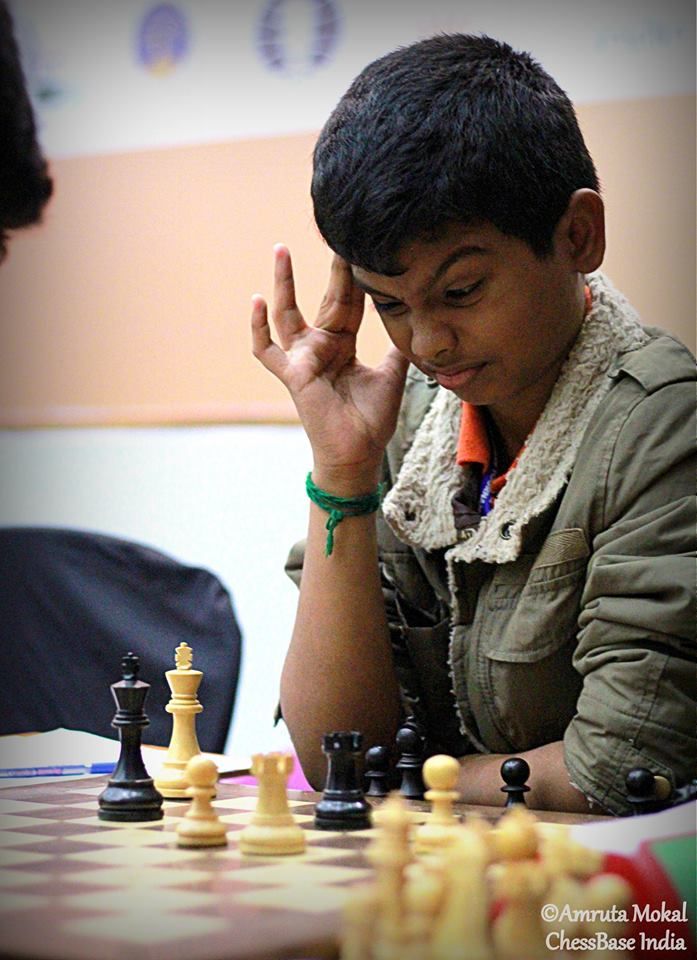 I don't really like my position! | Photo: Amruta Mokal 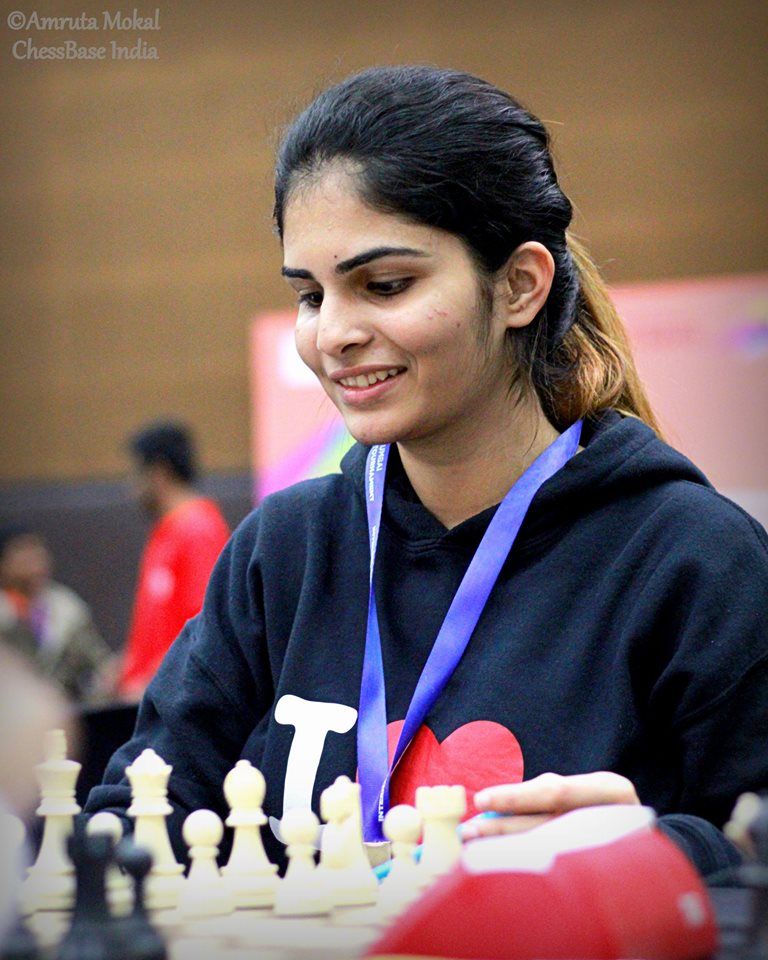 Just happy to be on the chess board! -Vrushali Deodhar | Photo: Amruta Mokal 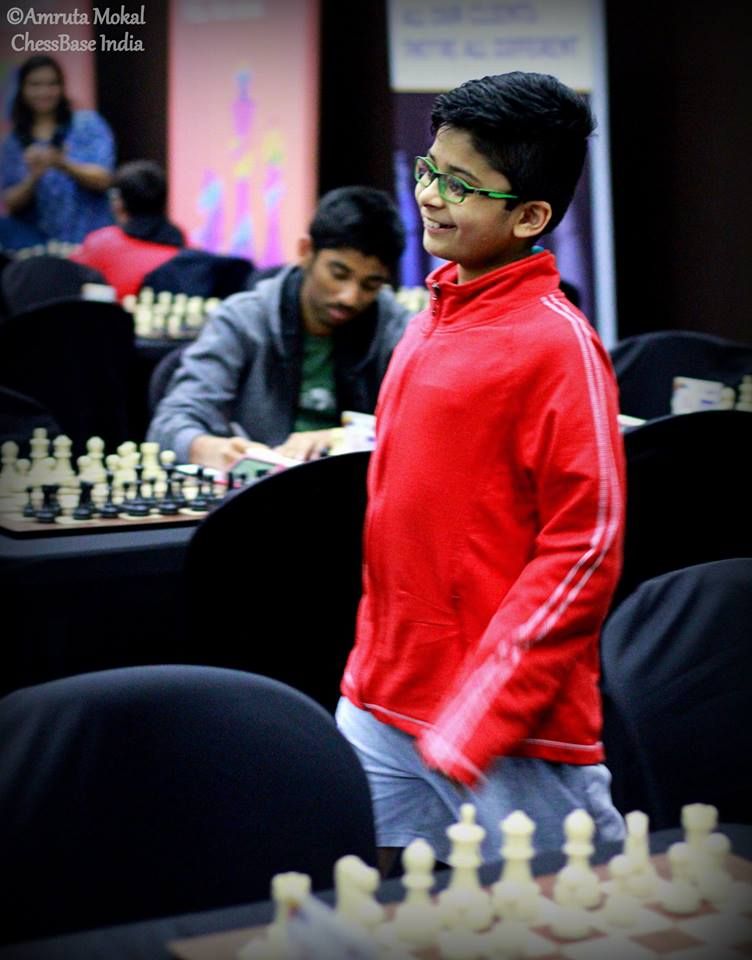 And that's how I tricked my opponent! Goa's Leon Mendonca! | Photo: Amruta Mokal The sinking feeling of 'my position is lost' sets in. Bharath Subramaniyam from Tamil Nadu. | Photo: Amruta Mokal
ChessBase India is making giant strides in bringing live commentary to the viewers! This is the first time that a tournament is being covered by live broadcast. We not only have master analysis with IM Sagar Shah and IM Vishal Sareen commentating, but also top players come to the studio to analyze their games after it is over.