Thanki Hemal Karsanji of Gujarat and Sandhya Goli of Andhra Pradesh won 6th National Amateur Chess Championship 2017. Hemal remained undefeated throughout the tournament, scored 9 points out of 11 rounds whereas Sandhya scored 8 points to clinch the championship in the women's category. Hemal shares with us the fact that ChessBase and its products had a big role to play in his success. As for Sandhya don't miss out on the Inktalk where she speaks about the challenges she has faced and overcome as a chess player. Here's a report consisting of pictures and annotated games by the champions. Photo: Delhi chess 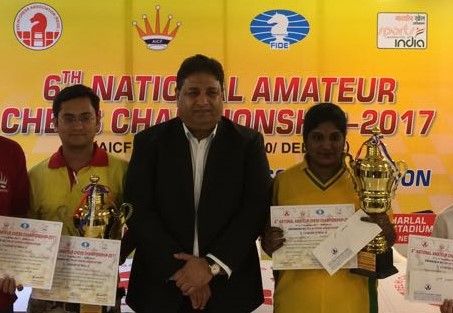 Thanki Hemal Karsanji of Gujarat started as a 4th seed, but he slipped from leading position after drawing his fifth round game. Then he went on and drew his sixth and seventh round game as well, resulting in a hat-trick of draws which put him in a 13-way tie for a seventh position. He then drew his tenth round game against top seed of the tournament CM Kushagra Mohan of Telengana and won the last round against Mohammed Dilshad of Kerala to become the champion. 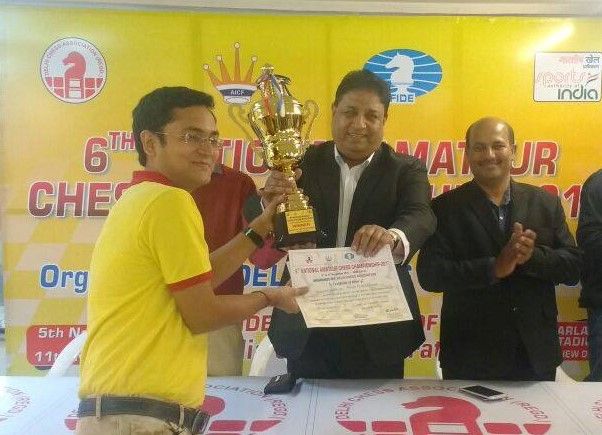 Here is a game of the last round, annotated by Hemal himself which according to him is the best of his from the tournament. Go through the game and you will know what was going through Hemal's mind during the opening, how he calculated and decided which risk not to take.

Here is a short interview to know Thanki Hemal Karsanji a bit better:

Thanki Hemal Karsanji (THK): Thank you so much! There were 6 people on 8 (points) after round 10. I was 4th due to tie break. So I was not expecting championship even after winning the last round. But when I knew that I won the tournament, I was very happy.

SA: How did you prepare for the tournament?

THK: I made use of the Online database and ChessBase on my laptop. These are essential products for any budding chess player!

SA: You made 4 draws in the tournament and remained undefeated. Who do you think gave you the toughest resistance?

THK: Kushagra Mohan had a slight plus but he could not convert that advantage. It was the only game where I had inferior position. My health was down when I made consecutive draws.

SA: What happened to you?

THK: I had some cold issue during almost 70% tournament. I have to improve over this problem.

SA: How did you manage to deal with cold along with the tournament?

THK: I think it was important to take enough rest and I made sure that I slept well in the night.

SA: Whom will you give maximum credit for your success at National Amateur?

THK: It is tough to give credit to one person. My family, BSNL and Gujarat state.

THK: I am self-taught. I have attended 1-2 camps organized by Gujarat state and 1-2 personal session but it is a bit costly so I prefer to use the databases provided by ChessBase.

SA: What is your ambition for World Amateur 2018?

THK: I want to become world champion. I will do my best.

Sandhya Goli did not have a smooth sailing on her way to become champion. She drew her second round game against a lower rated player, got a walk over on fourth round. She even lost her seventh round against second seed of the tournament Santu Mondal and tenth round against fifth seed Aaryan Varshney. But in the end she did manage to become the women's National Amateur Champion! 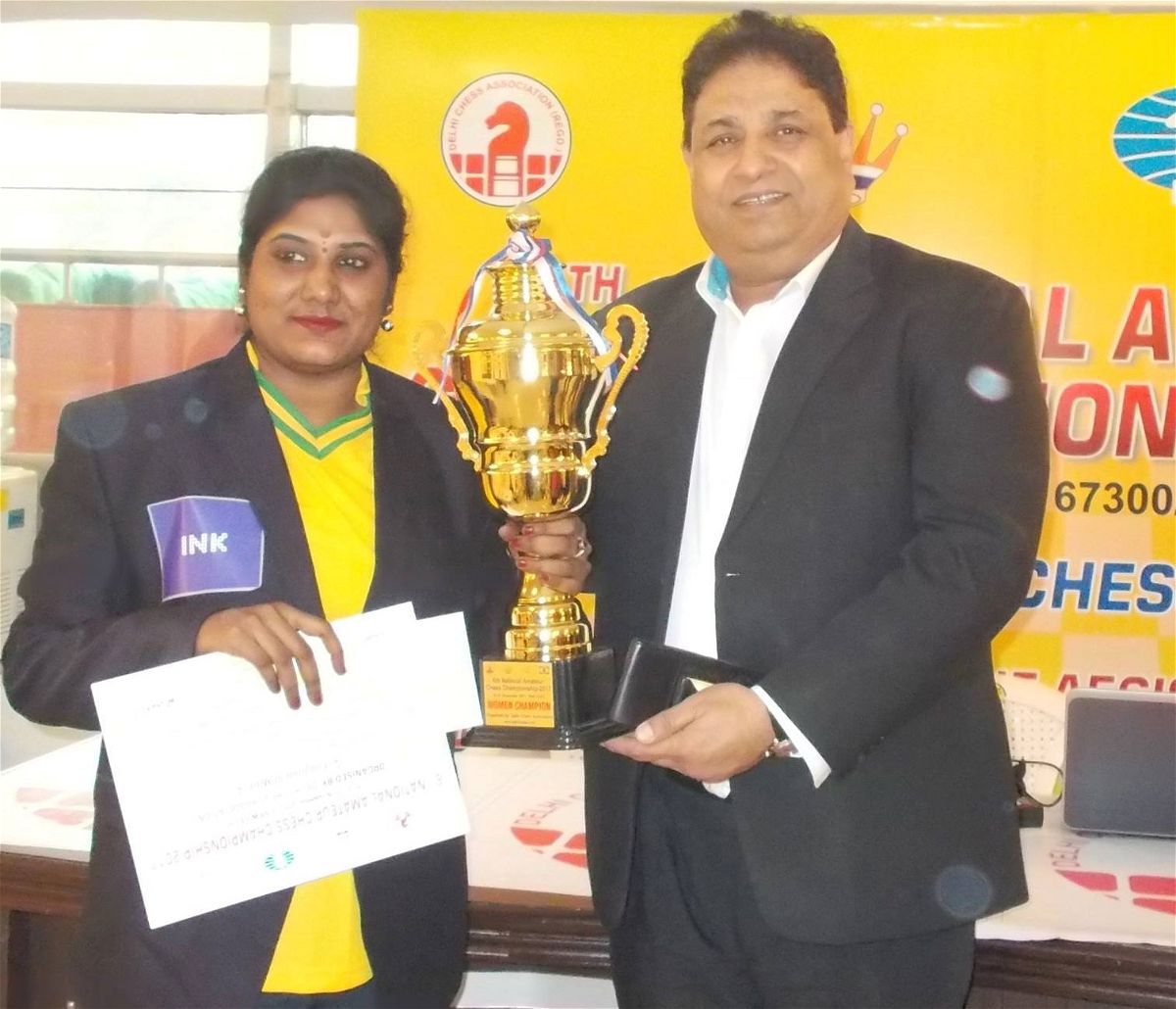 Here is a game annotated by Sandhya of her ninth round game against Raghvendra Kumar Mishra.

A short interview with Sandhya:

Shahid Ahmed (SA): How did you feel after knowing that you have become National Amateur champion in the women's category

SA: How did you prepare for the tournament?

SG: Like other tournaments, women tournament is not separate. So, I have to fight in open section and score good points. So I prepared like I have to give my best.

SA: In the penultimate round, you lost against Aaryan Varshney of Delhi. What was going through your mind then?

SG: Actually, While playing against Aaryan Varshney, I was thinking that if I win this round then I will become women champion. So, I thought like winning is compulsory and felt pressure and lost. After I lost, I realized my mistake. Last round, I simply forgot about everything, I thought like I have to play normally and I won.

SA: Asian Amateur is just a few days away in Chiang Mai, Thailand. How are you preparing for it?

SG: I am improving my game from analysing my previous games mistakes and trying to learn new techniques in middlegame and endgame.

SA: What is your ambition for Asian Amateur 2017?

SA: You have also won Amateur A category in Gibraltar early this year. How much do you think that has helped you?

SG: Winning at Gibraltar increased my self confidence and it helped me a lot. I was missing self-confidence before in my games

SA: Whom will you give the maximum credit for your success?

SG: INKtalks (I am an INK fellow), My Coach, My family.

[Ed: Don't miss out this Inktalk by Sandhya:]

The tournament witnessed about 260 players across 19 different states of India. Jawaharlal Nehru Stadium hosted the tournament from 5th to 11th November 2017 and the event was organized by Delhi Chess Association.