Harsha Bharathakoti: A star on the rise

At the Isle of Man Open last month, the Indian contingent gave spectators every reason to believe that India is the next big thing in chess. While Vishy finished joint second and Vidit Gujrathi drew the world champion, another young Indian boy, Harsha Bharathakoti made his presence felt in Douglas by scoring back to back upsets. Rated merely 2394, Harsha scored wins against much higher rated GMs like Varuzhan Akobian and Bhaskaran Adhiban and earned his maiden GM norm with a round to spare. Below is the brief of the young man's spectacular show along with annotated games by Harsha himself!

The recently concluded Isle of Man Chess attracted some of the biggest names in chess. To name a few, there was the world champion, Magnus Carlsen; the blitz king, Hikaru Nakamura; the Tiger from Madras, Vishy Anand. With the best of the best in the field, the event attracted 160 participants, of whom 30 were Indian.

Overall, the Indian posse did exceptionally well at the event. There were some remarkable performances like Swapnil Dhopade’s unbeaten run which ended with a rating performance of 2768 or Vidit’s comfortable draw against Magnus Carlsen. But the 17-year-old Harsha Bharathakoti perhaps stunned everyone the most. 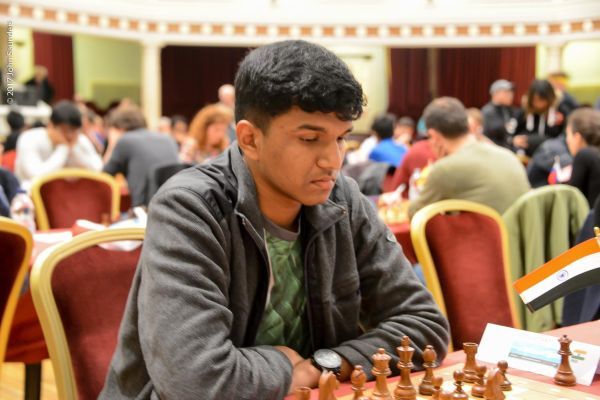 Harsha, during his round 5 game against Adhiban | Photo by John Saunders

Rated at a modest 2394, the recently crowned National Junior champion went through several acid tests taking on players rated in the vicinity of 2650 in almost all of his first five games. And believe it or not, the boy remained unbeaten! At this point, his rating performance had reached a stunning 2894, something even the elites of the game would envy.

Below is his round 5 game in which he got the better of his compatriot, B Adhiban (who, by the way, was rated almost 300 points above Harsha) with the black pieces.

By round 6, Harsha had reached the very high up the ladder. Not only was he tied for second, but he was also half a point ahead of the god of Indian chess, Vishy Anand. Playing on board 5, he was paired against the GM on the rise, Vidit Gujrathi. 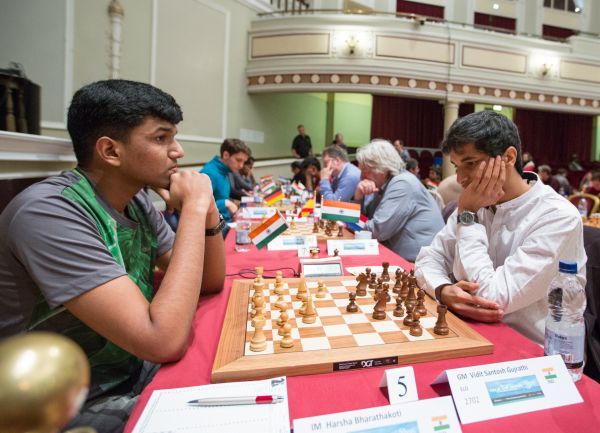 Who could have imagined a player rated 2394 would play on one of the top boards of such an elite event!| Chess.com / Maria Emelianova

From the very start of the game, Vidit went all guns blazing at the young IM from Telangana. As early as on move 7, Vidit uncorked a novelty and shattered Harsha’s pawn structure. Another oversight in the middle game led to a pawn loss and a queen exchange. Then on, it was a cakewalk for Vidit. Harsha, thus, suffered his first loss of the tournament.

In the entire tournament, Harsha did not face a single similarly rated opponent. In fact, all of his opponents – except Aravindh Chithambaram and Sebastian Bogner – were rated above 2650. But despite the rating difference, the Telangana lad stood strong and gathered five points out of a possible nine, drawing against and beating almost every ‘on paper favourite’.

Harsha has been kind enough to annotate the other two wins of his successful campaign at the Isle of Man as well for our readers. 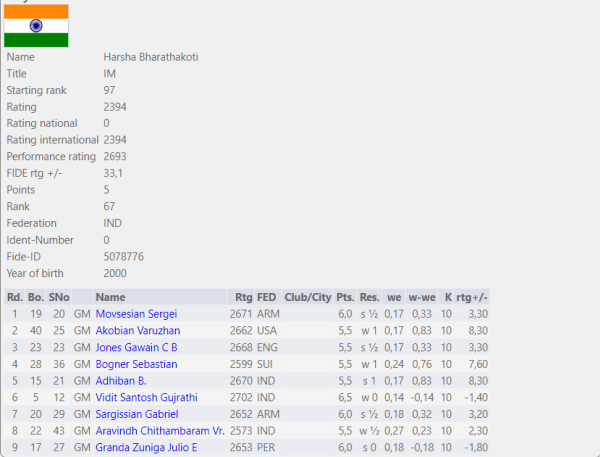 Despite losing two games in the second half of the event, Harsha finished with a rating performance of 2693!

With this stupendous show, this young Indian International Master has not only earned himself a GM norm with a round to spare but has also made it clear to the world that a storm by the name of Harsha Bharathakoti is soon to stun the elites of the chess world.