It was going to be a 12 game rapid match between David Navara and Ding Liren in the capital of Czech Republic - Prague. However, Ding Liren met with an accident and injured his hip at the recently concluded Norway Chess. The organizers found a last minute replacement in India number two Pentala Harikrishna. Hari has recently shifted his base to Prague after marriage. On the first day, the Indian was clearly the better player as he scored a win and two draws to lead the match by a score of 2:1. We have the pictures, games and analysis in this report.

When Ding Liren fell off the bike in Norway and got his hip operated, the organizers of the CEZ Trophy in Prague were in a quandry. They had scheduled a 12-game rapid match between Ding Liren and their ace player David Navara. To find such a strong replacement for Ding Liren at the last moment was not going to be easy. But the organizers didn't have to look far! India number two Pentala Harikrishna has made Prague his base after he got married a few months ago. 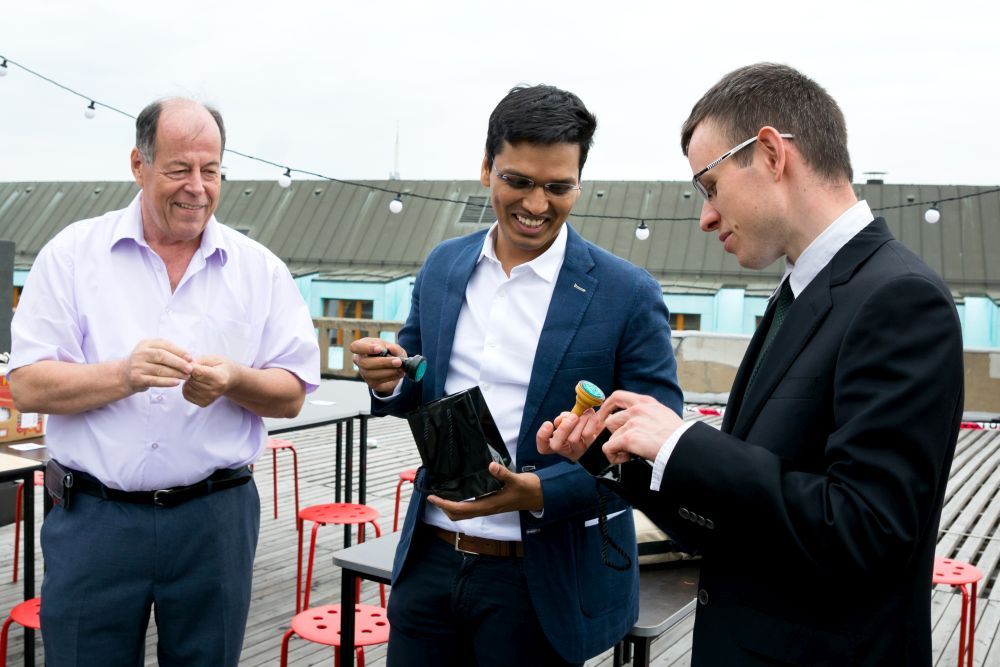 What's that written below the king? | Photo: Official website 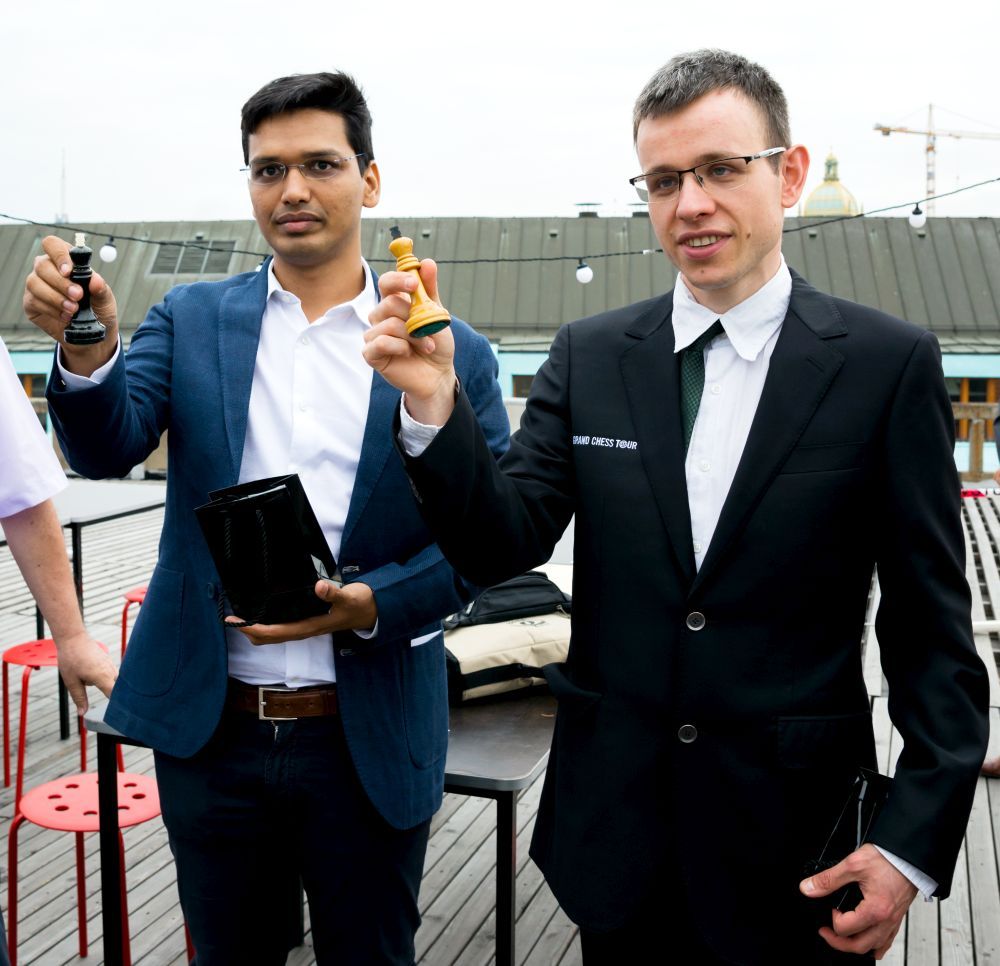 White pieces for Navara in game one!  | Photo: Official website

Navara and Harikrishna are close friends. When Hari was knocked out of the World Cup 2017, instead of taking his flight back home, he decided to help Navara to prepare against Grischuk. The style of both the players is very different. While Navara likes to take risks and heavily depends on opening preparation, Harikrishna likes to play original chess and is more balanced as a player. Also, when it comes to calculations I think it is David who comes out ahead, but if we talk about positional feel, then Harikrishna seems to be the better player. All in all this 12 game rapid match (time control of 20 mins + 10 sec increment) was one that everyone looked forward to with great interest.

Navara played the topical line in the Mikenas variation of the English. But Harikrishna soon got a fine position. White's error could well be his slow 16.Rc1. Hari was able to coordinate well and get a clear advantage. It was a pity that he couldn't convert it. 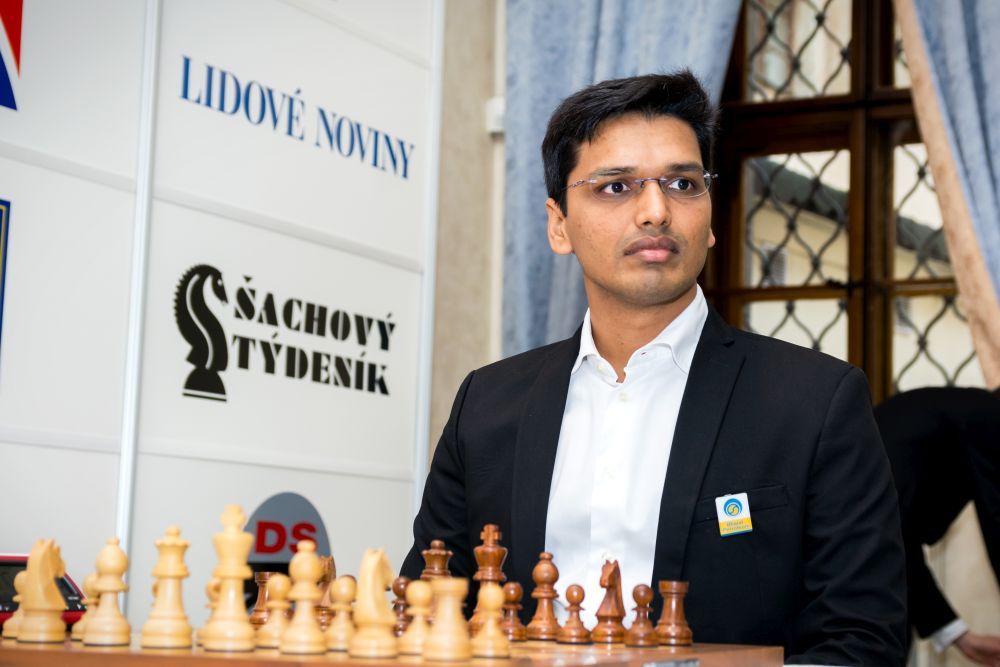 After missing his opportunity in round one, Hari struck back to win game two  | Photo: Official website

If you are aware of the famous game Janowski-Capablanca, you will surely find some similar contours between that and Hari's game against Navara. Although, White (Hari) was always slightly better, it was not so easy to convert it into a full point. But Harikrishna maintained the pressure right until the very end and made his opponent err. Here's the game:

Just in case you were curious about the Janowski - Capablance game:

The move that really made it a famous game was Capablanca's retreating bishop manoeuvre: 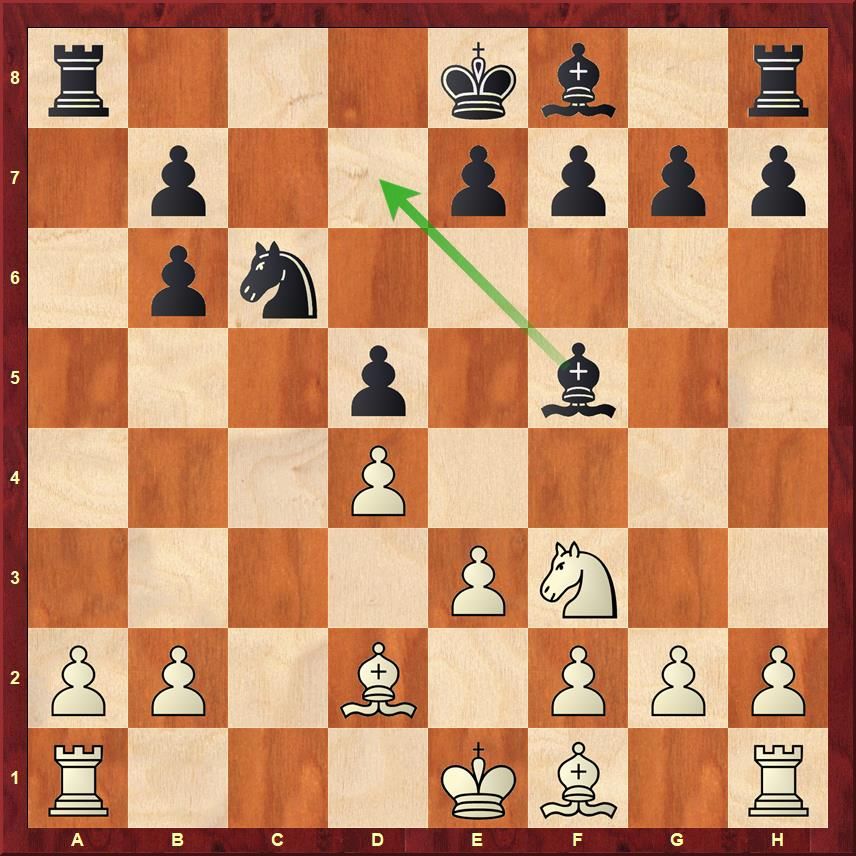 The game was well fought and ended in a draw in the rook endgame. 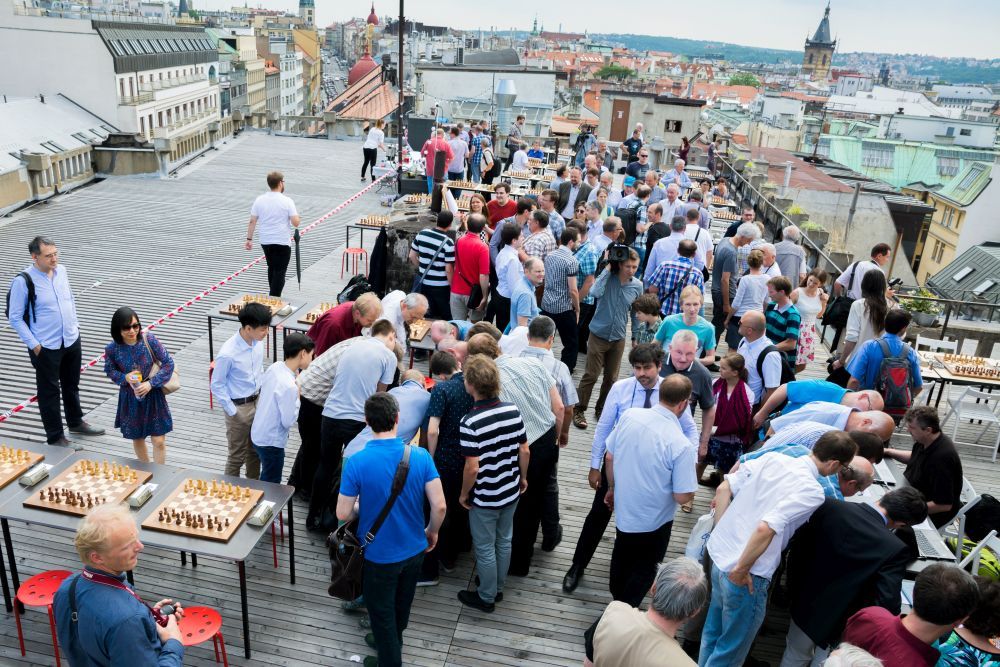 One day prior to the main event, was the blitz event which took place on the rooftop with a nice view of the city of Prague  | Photo: Official website 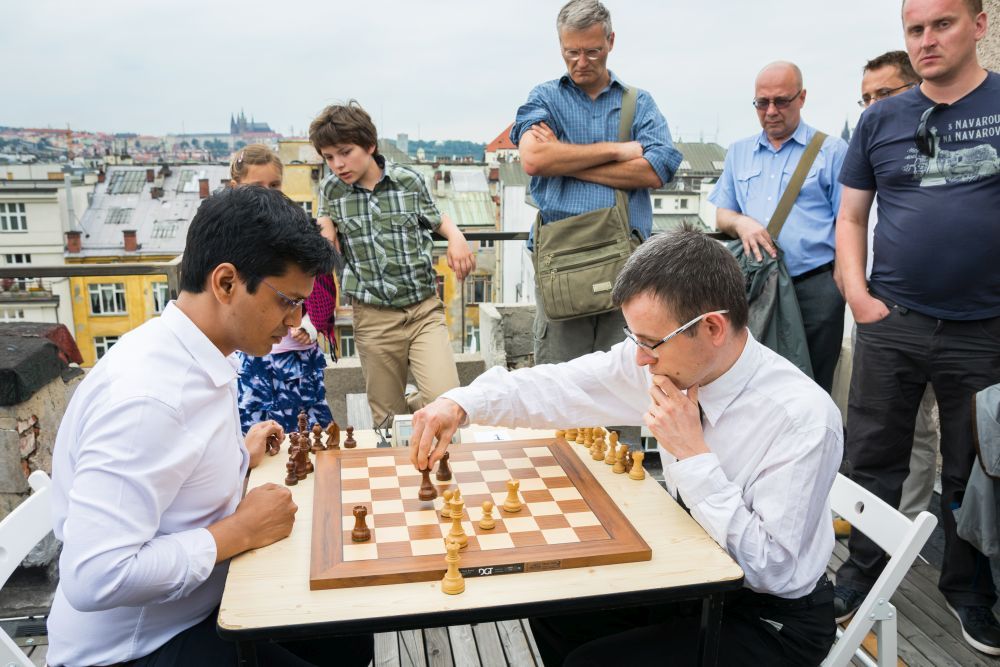 David Navara managed to beat Hari in the blitz tournament and emerged as the winner  | Photo: Official website 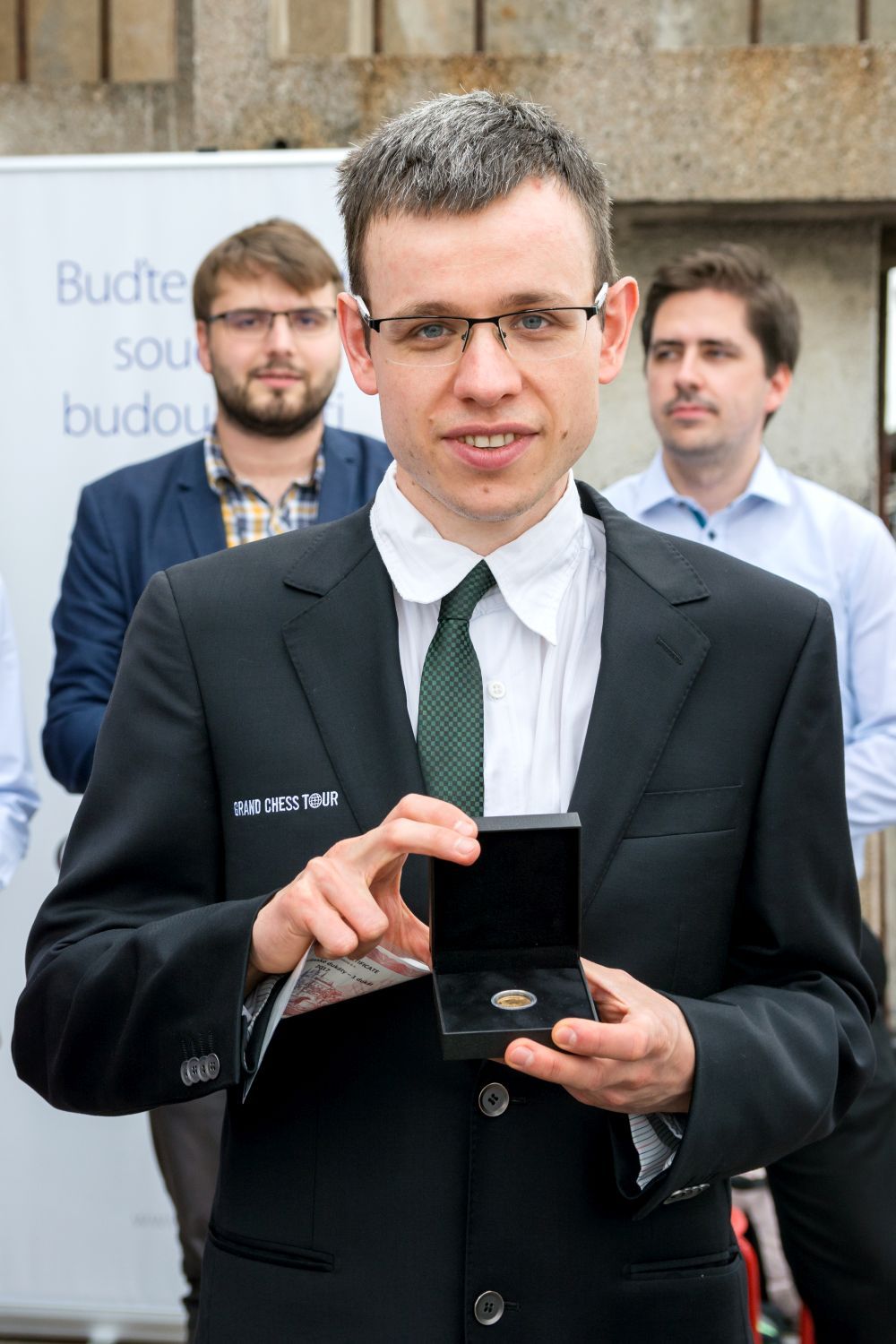 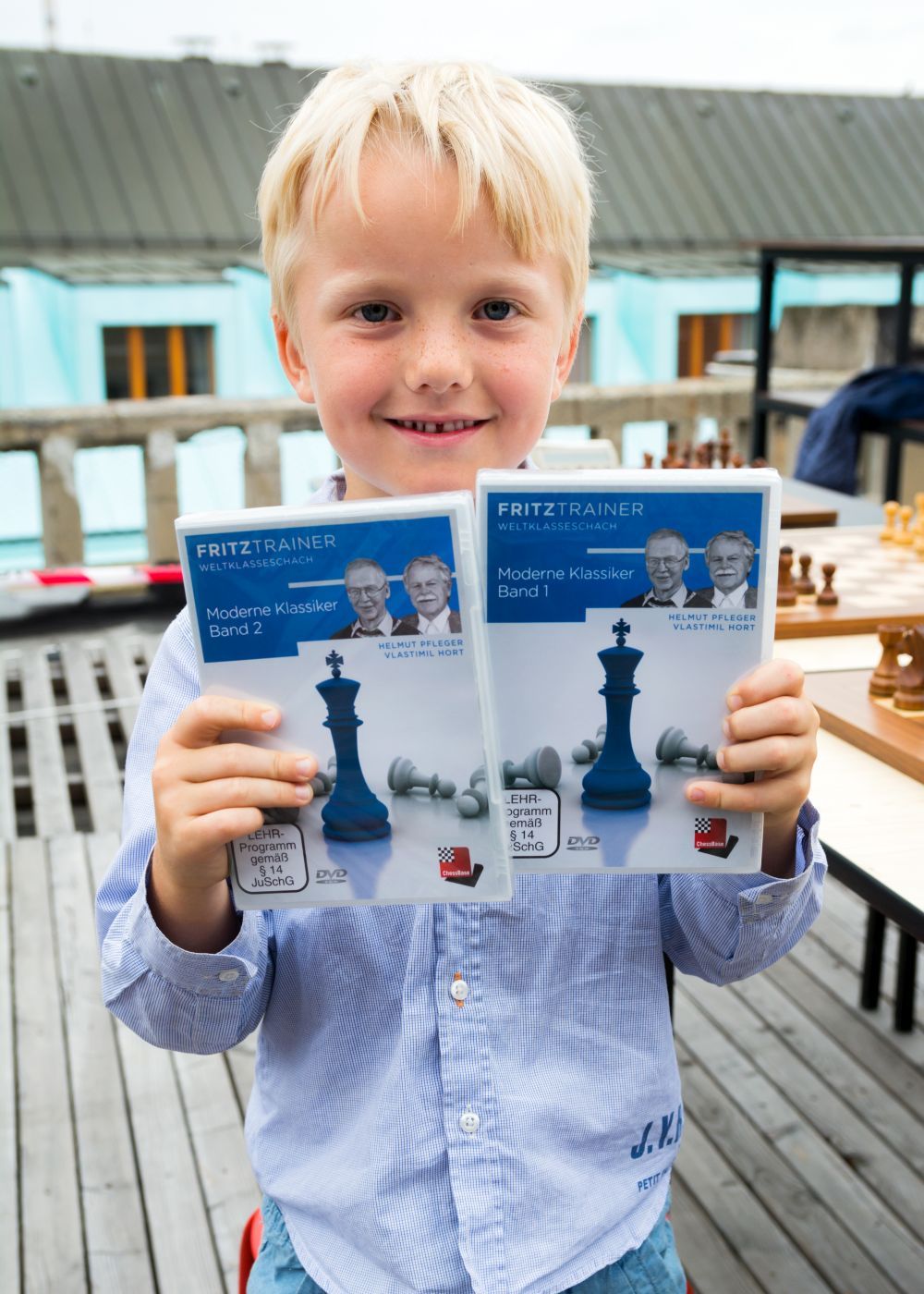 The young boy is quite pleased with his ChessBase DVDs!  | Photo: Official website

Final rankings of the blitz tournament: