With Vidit Gujrathi presenting his flamboyant victory against the legendary Vladimir Kramnik, the all-new Grandmaster Chess series piloted with a cracker of a first episode last month. The second instalment of the show therefore only saw the interest snowball, as this time all the four comedians - Samay Raina, Biswa Kalyan Rath, Vaibhav Sethia, and Anirban Dasgupta - came thronging in to join the ever genial host Sagar Shah. The guest was IM Tania Sachdev, and the game she selected for the occasion was her win against WGM Swati Ghate from the 37th Indian Women's Championship, 2011.

Tania is a superb chess player, a charming commentator, but in this two hours long stream we discover that she fairs quite well as an instructor too!

About Tania Sachdev, and a bit of backstory... 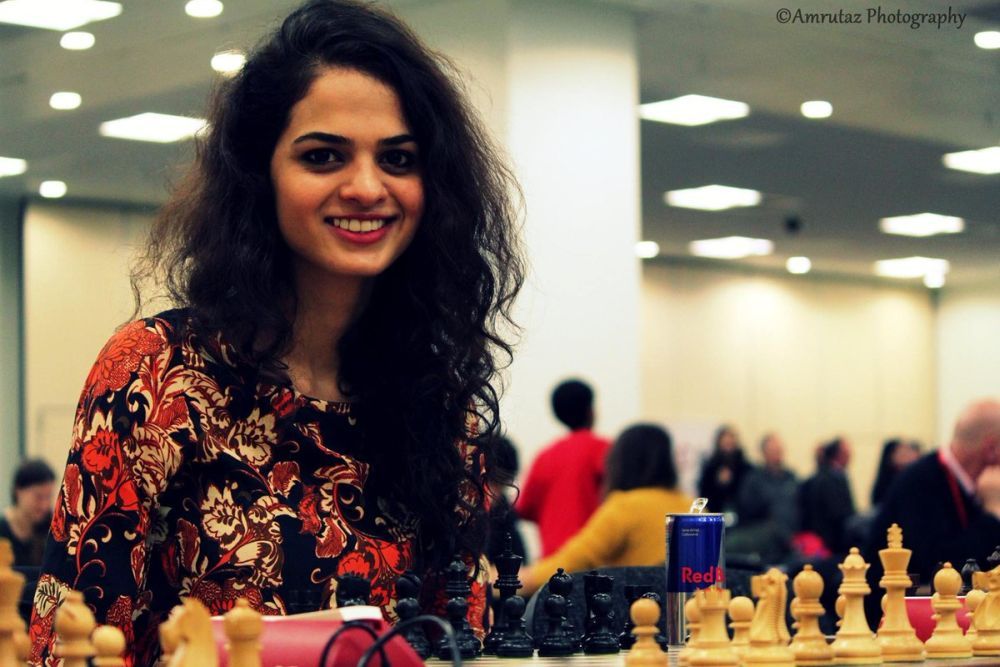 Tania is an International Master and one of the most acclaimed and glamorous faces of Indian chess. She was conferred with the prestigious Arjuna Award back in 2009 for her outstanding achievements which include, among others, winning the National Women's Premier Chess Championship twice, in 2006 as well as 2007. Tania is also much sought-after as a commentator and was even a member of the official commentary team for the 2013 (Chennai) World Championship Match between Magnus Carlsen and Viswanathan Anand. (Photo: Amruta Mokal)

With notable results even against strong Grandmasters, there's no dearth of brilliancies in Tania's career as an International chess player. But for this particular stream, she picked an encounter played nine years ago in a National platform - the 37th Indian Women's Championship. Her opponent was Swati Ghate, a well-established WGM, known particularly for her attacking style of play.

Swati's hyper-aggressive style used to be a problem back then for Tania. "I used to have most difficulty facing Swati, her style was very intimidating over the board," she confesses in the stream. But this particular game proved to be a sort of turnabout where she overcame her jinx by not only beating Swati, but beating her very much in her own style.

If you want a different result, you have to start trying out different things. Interestingly, the opening Tania chose in this game was also a first-time for her. She says that she usually doesn't like giving away material even if it's for compensation, but here she went ahead and boldly chose to drop a pawn for superior activity in exchange. 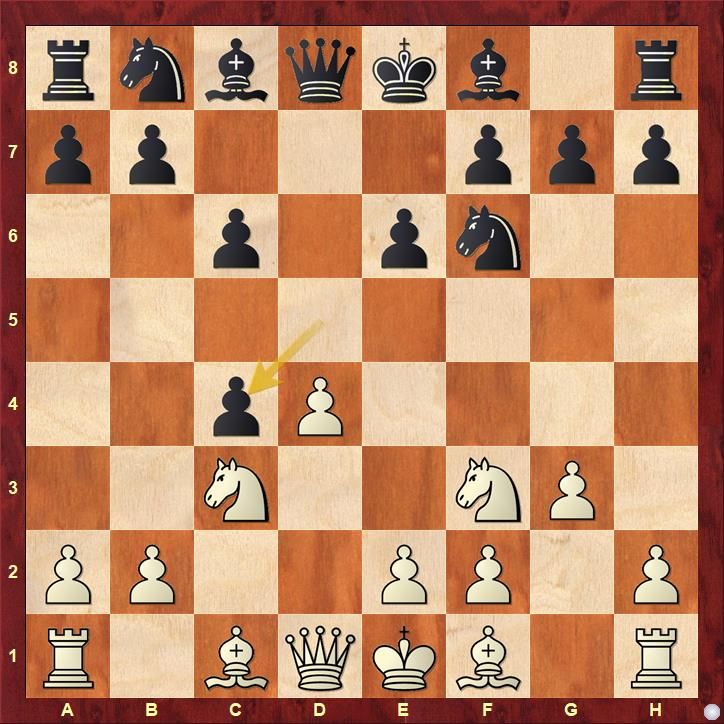 ...And therefore a closed Catalan was on the board. After ...dxc4, as Tania says, White simply continues down a pawn but gets a lot of development in return!

Taking away dynamism from Swati Ghate is like taking water away from a fish! Once steered into a cramped position, her vulnerability became apparent, and even with an extra pawn, she clearly struggled to hold her own. Tania on the other hand, with each of her move, kept making compelling use of her superior activity and space.

We give you the ten critical positions from the encounter below, and recommend you to go over them chronologically for it is mostly about tapping into the spirit of the game, understanding how one can exploit space to one's advantage. We also give you the scores of the comedians below the positions so that you may tally your performance relative to them.

Time to test your wits against the comedians!

Episode 2 of Grandmaster Chess saw all four comedians aboard - a 100% attendance. Careful, given how motivated these guys have gotten lately, it won't be easy to better them. You would definitely need to be all eyes and ears! 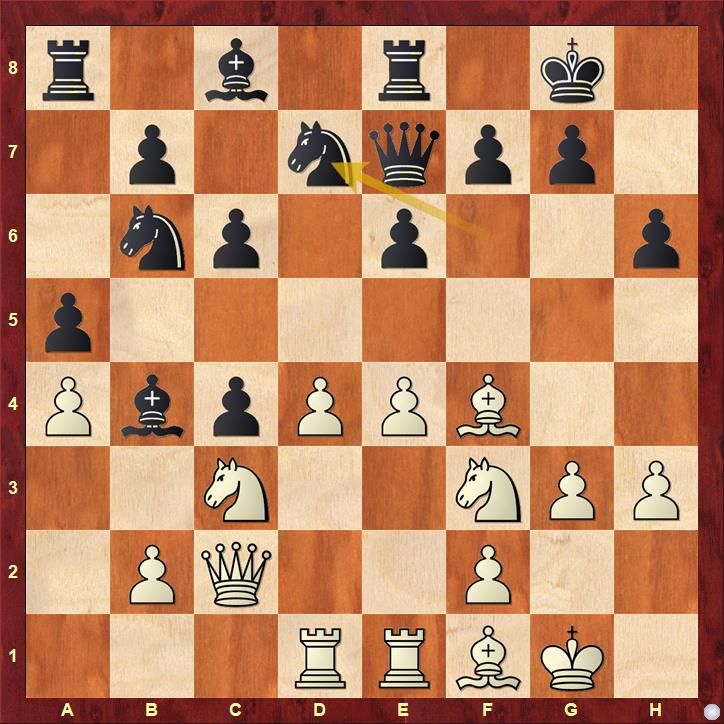 Black has just played 15...Nfd7. It isn't hard to guess the moves leading the diagram above up to this current position. As Tania explains in the video, this is a setup opening. White gives up the c4 pawn and then simply continues with the most natural developing moves, hoping to break at some point with e5 or d5. But surprisingly after Black's last move, here White already has a meaty chance to reinforce the space advantage that she enjoys. Black is passive and the next move Tania plays makes her all the more so. Can you spot it?

Actually, none of the comedians managed to score a point here! The correct answer is 16.Bc7! a very non-standard move that almost paralyses Black by attacking b8, d8, and most importantly b6, which ensures that the knight on d7 is stuck. Black's only hope is to force exchange of the dark-squared bishops in this position with 16...Bd6, which was indeed played in the game, but as we will see this exchange only favours White. Tania explains in the stream how she found this idea and speaks of a famous Karpov game which inspired her to play like this. 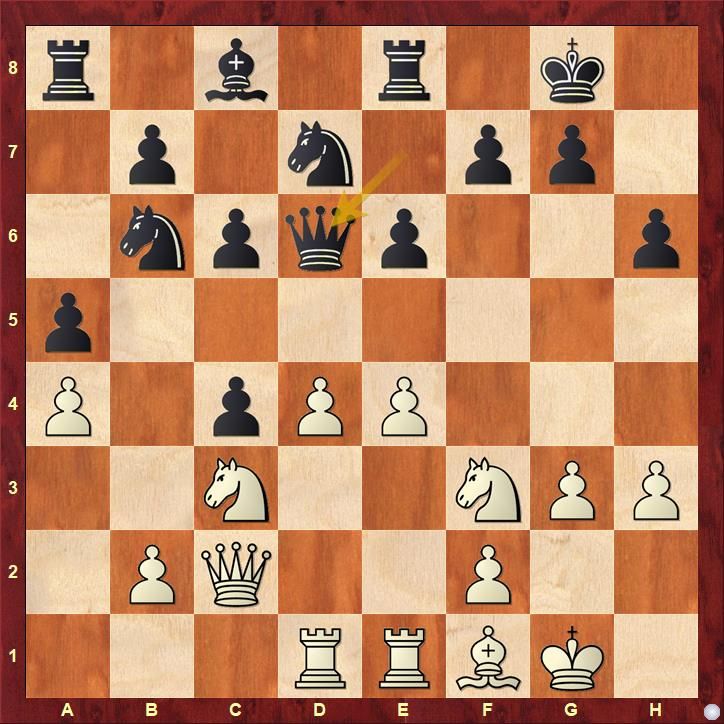 Next, the dark-squared bishops were traded. We already mentioned that this exchange only favours White, but can you actually figure out the continuation that ensures the advantage? How does the absence of bishops on f4 and b4 affect the position?

The move that comes immediately next isn't hard to guess and all the comedians got it right. Yes, it is 18.e5! - White wins a tempo on the queen and prepares to grab the d6 square with the knight. Thanks to the dark-squared bishops gone, the d6 square is now a juicy outpost for one of White's knights. 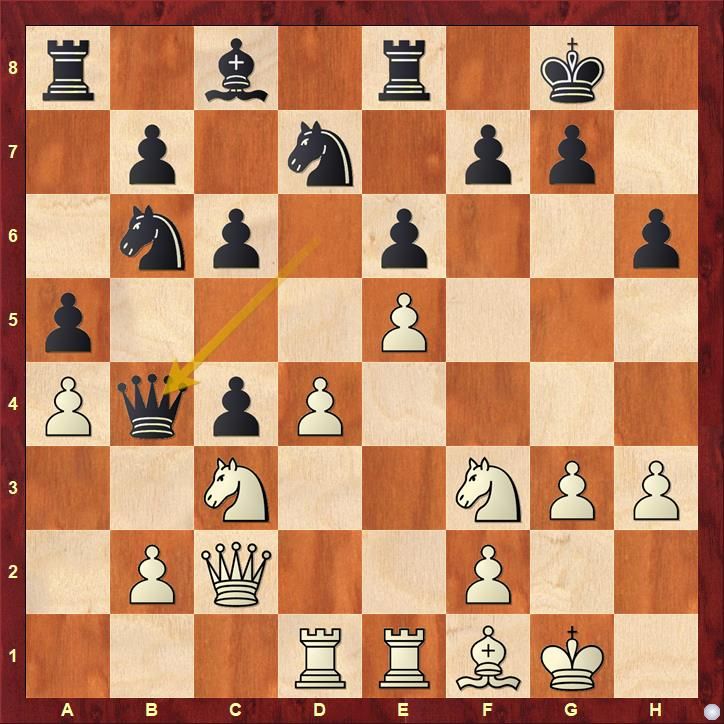 Again an easy point to score. The plan is simply to get one of the knights to d6. How did Tania manage that?

Biswa was the only one to find the right answer here, which is 19.Nd2! with the idea of Ne4-Nd6 next. Samay preposterously suggested going 19.Ne4 which also aims for Nd6 but hangs the a4 pawn unfortunately. Vaibhav came up with a strong alternative in the form of the rook-lift 19.Re4 and was awarded half a point for the same! 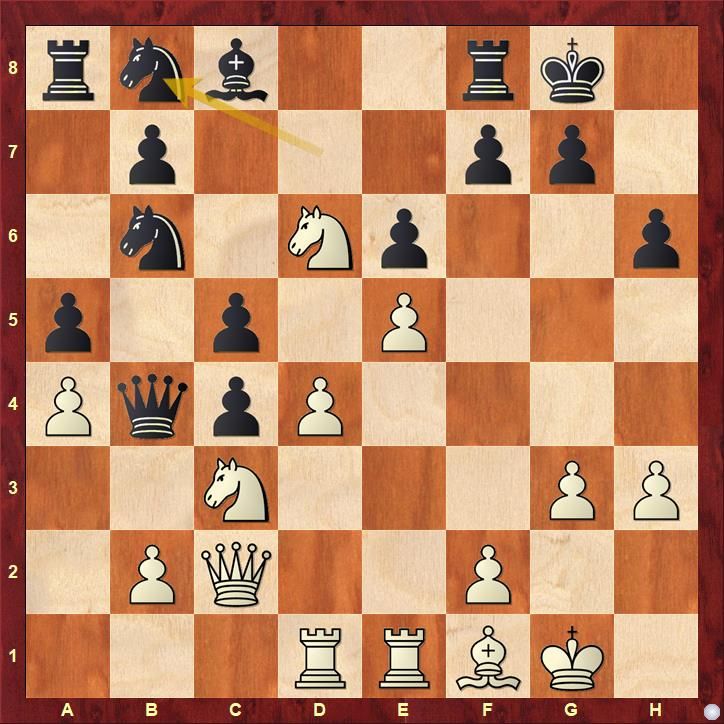 With 21...Nb8 Black was hoping for Nc6 next and some activity thereof, but here White had something very concrete and perhaps also a little anticlimactic in store. Can you see it? Time to calculate some concrete variations here!

The right answer is 22.d5 and Vaibhav guessed it correctly. But the point behind this concrete break lies in the follow up...So let's proceed to our next question! 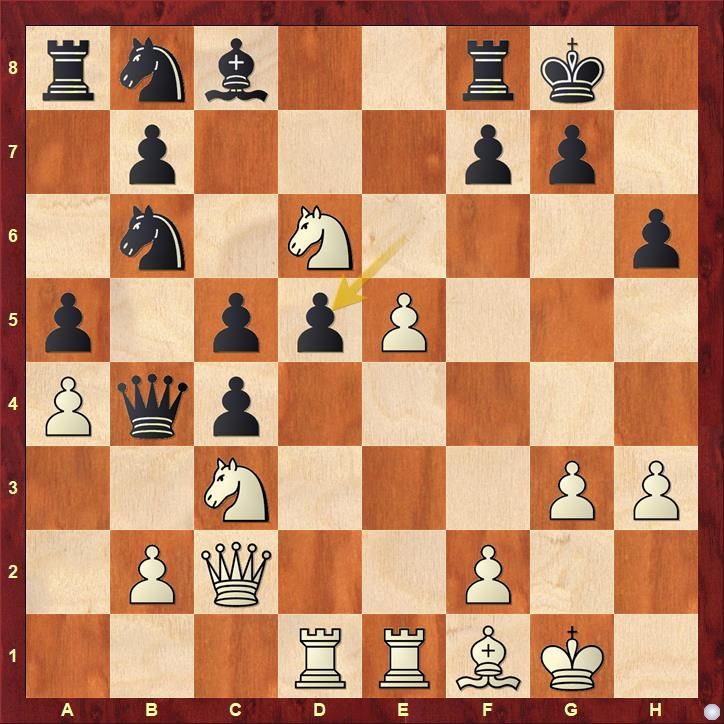 The right move here is 23.Nxc8! Yes, it feels a bit anticlimactic to exchange the fantastically placed knight on d6 for the bishop on c8, but Tania had very concrete reasons behind this decision. Can you see it? Well, hold on! That's what our next question is. 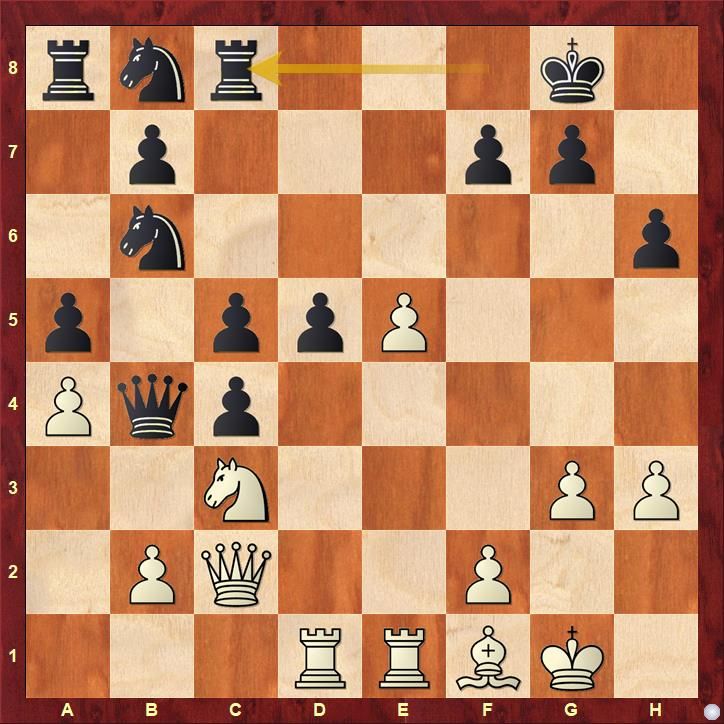 Once the bishop on c8 is gone, what is that move that screams to be played?

Like they say, strike the iron when it is hot! The right move is 24.e6! - this is the break we need when all of black's pieces are invested on the queenside. After 24...fxe6 23.Rxe6 White gets another piece - the rook - into the attack. 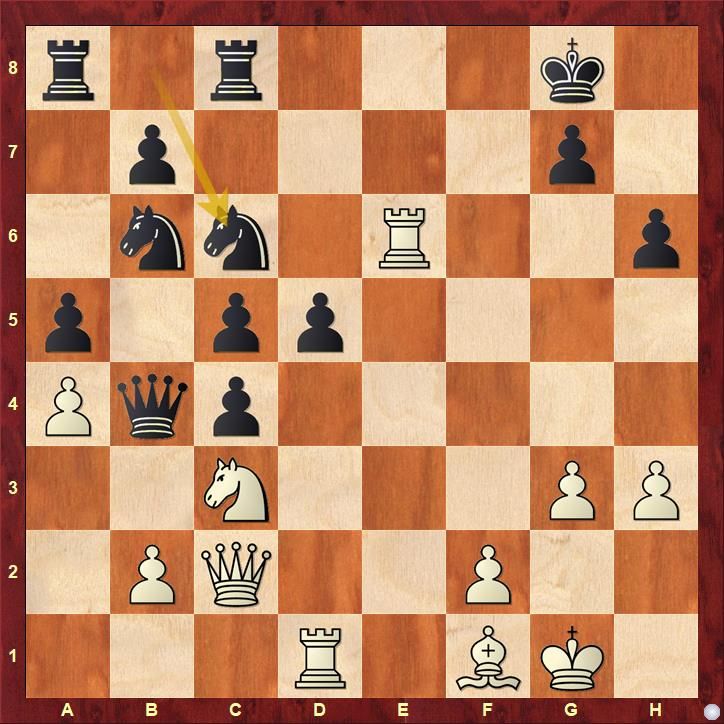 White has done enough building up and so now it's time to deliver a masterstroke. What would you play as White here?

It's a bit radical and perhaps that's why the comedian missed it, the move Tania played here and which probably is the star move of the game is 26.Rxh6!! Give yourself a pat on the back if you guessed it. Tania explains that with all of Black's pieces on the queenside, such a sacrifice actually makes a lot of sense. 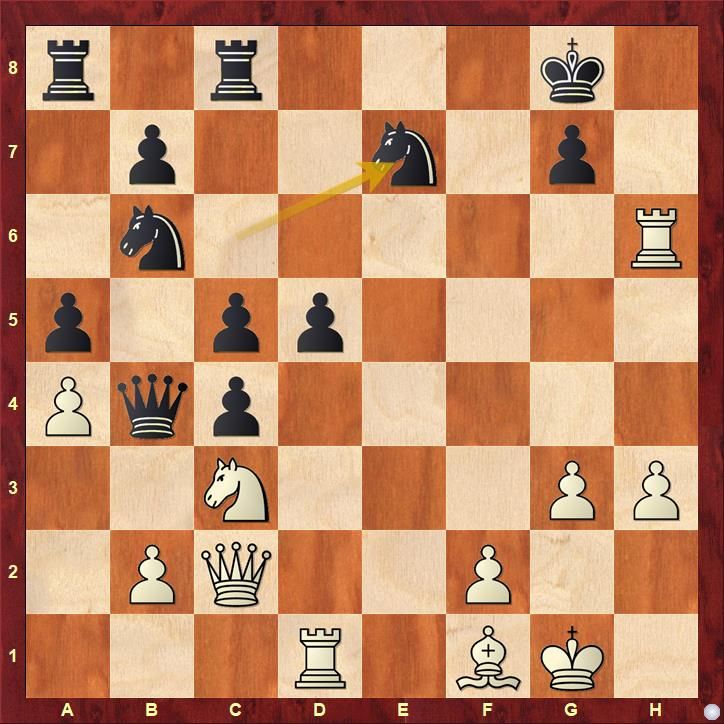 But it is not over till it's over. How would you continue after 26...Ne7? It is once again about getting more pieces into the foray.

The move is 27.Re1! - you can see how White is bringing all her troops into the play. Activity is really the theme of this entire game. Tania doesn't concede Swati any breathing room. 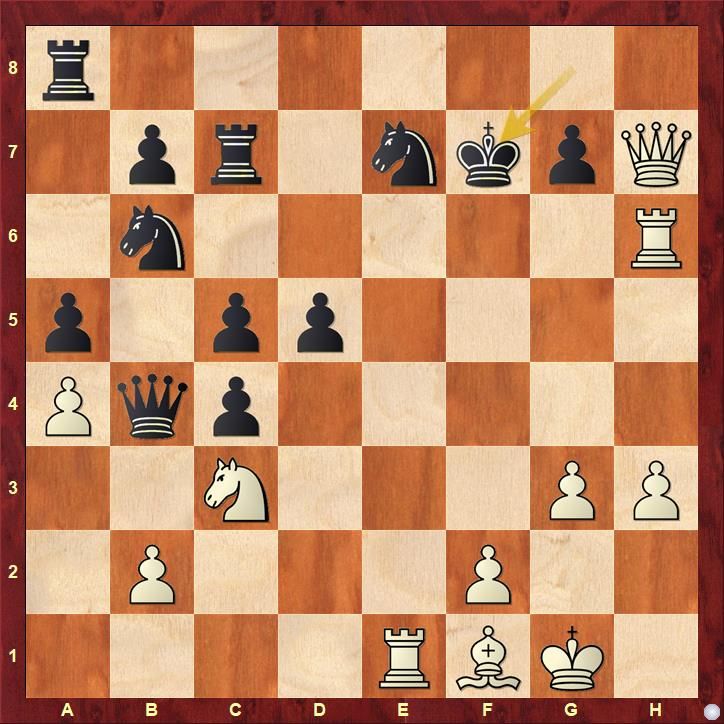 There are more than one good move for White available here!

Both Re3 and Re6 are very strong here. Even Rxe7+ works in a spectacular way. Tania played 29.Ree6 in the game. 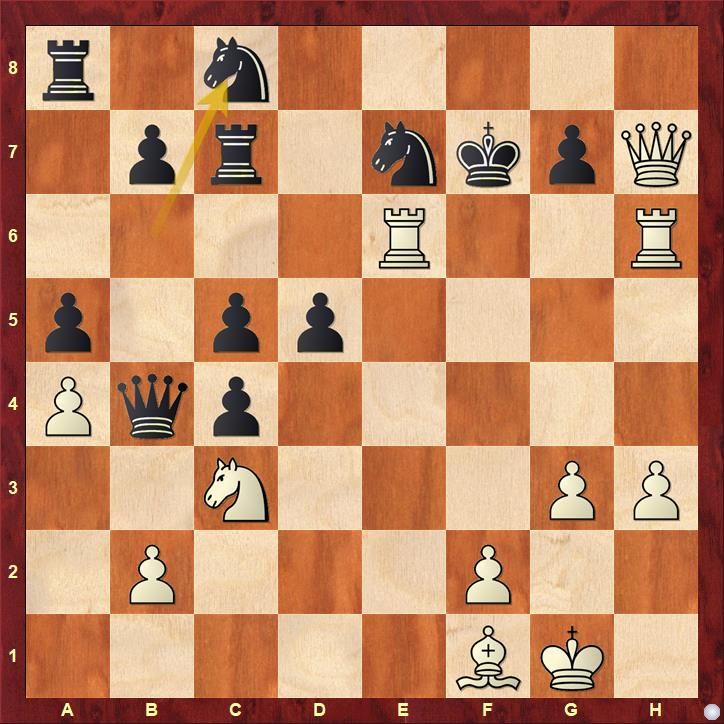 Again, many roads lead to Rome. But let's keep things simple and find the best move, shall we?

The best move is 30.Rhf6+ which is what Tania played to finish Swati off. But actually 30.Nb5, 30.Ref6+ too are good enough to bring the full point home. Now we will leave the full game with annotation below for you to replay:

Let us know in the comments section below, how you enjoyed this game and how many points you scored!