This article comes with a slight delay, but the timing is quite apt. GM Debashis Das performed amazingly at the Gibraltar Masters 2018. He performed at an Elo of 2700+. But we must remind our readers that two months ago, he won the SMCA Online Blitz chess tournament convincingly. This was the first time that the grandmaster from Odisha had won a ChessBase Online Blitz tournament. He finished ahead of Indian stalwarts like Adhiban, Sethuraman, Gopal, Aravindh Chithambaram and many more. This tournament's average rating of top 14 player was higher than National Premier, thus it made the tournament the strongest ChessBase Online Blitz tournament of the year 2017. We bring you some of the most interesting games of these players and the entire prize list. 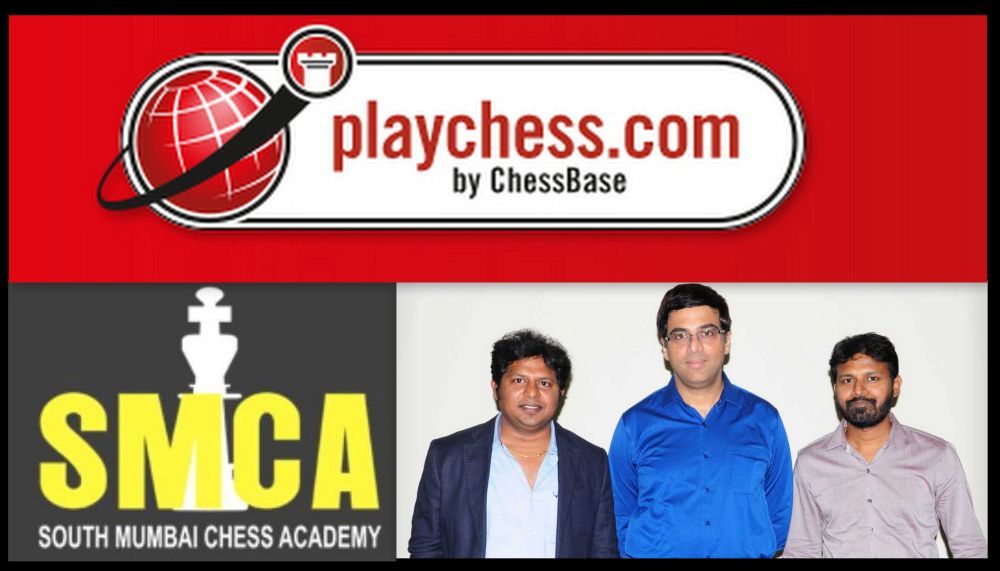 The tournament was held on the 3rd of December 2017. 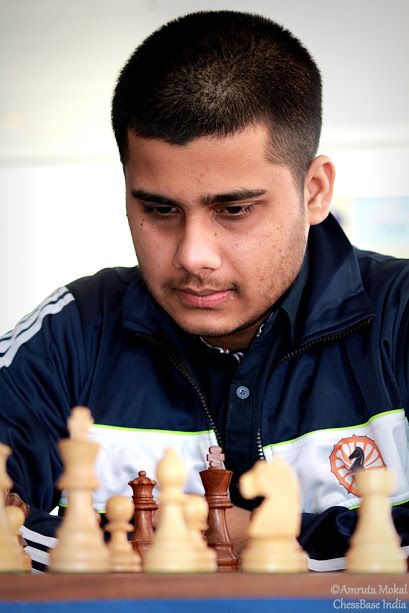 Here is the top 25 seeds of the tournament that was held on 3rd of December 2017. The strongest line-up for a ChessBase Online tournament:

Despite having a slow start by drawing his third round game against National under 13 and under 17 champion Raja Rithvik R, losing against former Commonwealth under 13 champion Koustav Chatterjee in the fourth round, he won his next six games which made all the difference and finished with 8.5/10. His victims from fifth to tenth round were, Mounika Akshaya Bommini, P Karthikeyan, G N Gopal, Baskaran Adhiban, S L Narayanan and 2-time ChessBase Online Blitz champion, R Lalith Babu.

The last round was nerve-wracking as Debashis Das faced Lalith Babu, while S.L. Narayanan was up against Swayams Mishra. In the end both Odisha boys triumphed. IM Sagar Shah did the live commentary when the game was in progress:

Live commentary in the final round by IM Sagar Shah

Here is the only loss Debashis suffered in the entire tournament against Koustav:

His best game was against S L Narayanan (Indianwonder) in the 9th round: 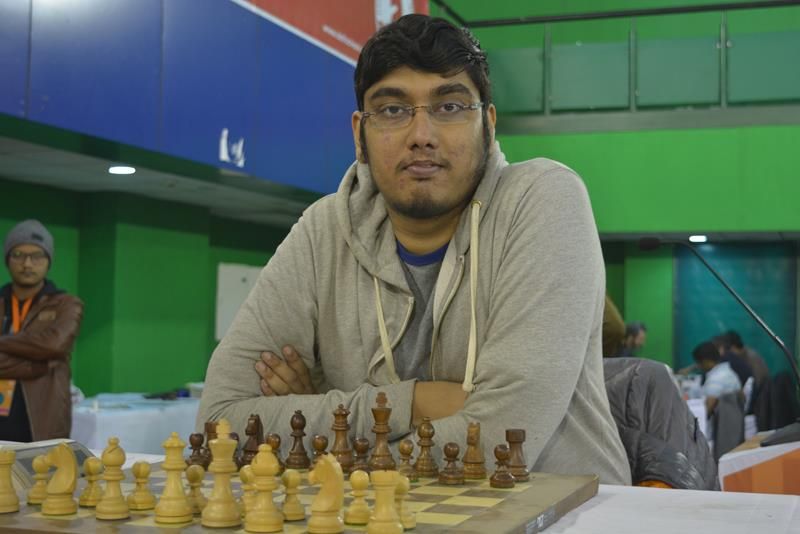 Lately, if there is anyone who is consistently finishing for the podium it has to be IM Swayams Mishra (Mr bh6). His best game was against GM Murali Karthikeyan (Fighter64) 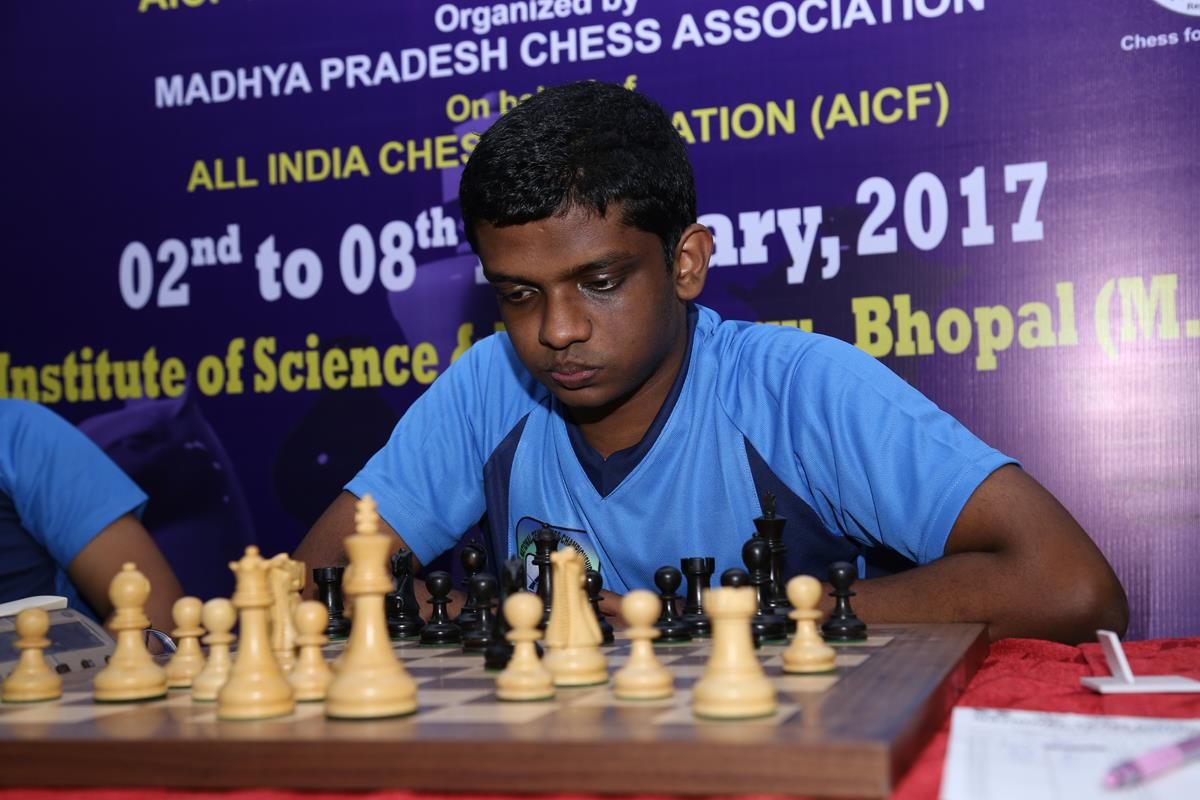 GM S. L. Narayanan (Indianwonder) started fantastic with 7.5/8, but losing last two rounds cost him the championship, still he managed to finish at third position. He had a marathon game of 92 moves against GM M R Lalith Babu in the 7th round:

Speaking to ChessBase India after the tournament S.L. Narayanan said, "It was a great experience to play in such a strong field through an online platform. This was my first online tournament and I am very much elated by the way it was conducted. Kudos to the team! And in my opinion, such tournaments should be conducted more often." 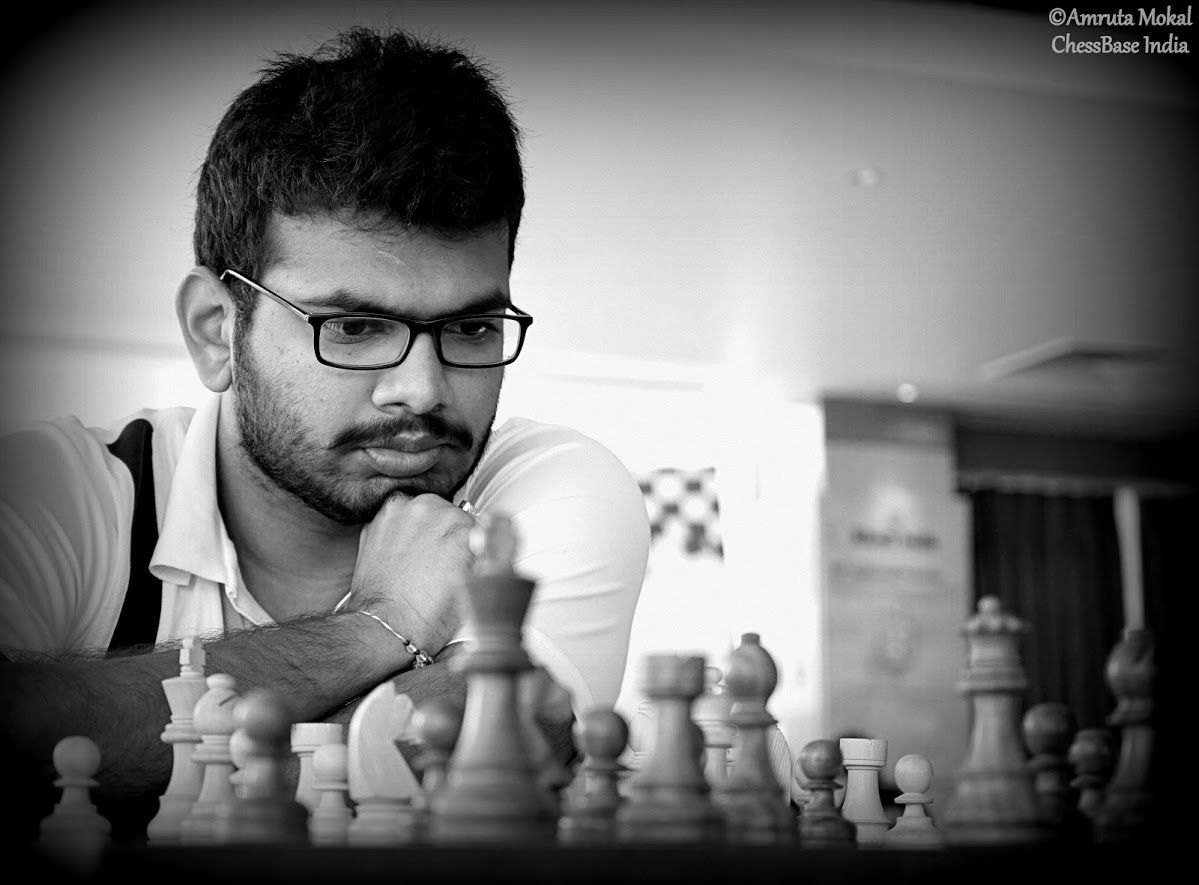 Lalith Babu did not have a strong finish which is very unusual for Mr.Playchess! He might be the only player who would not be happy with a fourth place finish and take home ₹5000

GM M R Lalith Babu, did not have a good tournament as per his previous records. He scored 7.5/10 and was placed 4th. In the 9th round, he defeated Commonwealth under 16, Asian Youth Open and Rapid, gold medal winner FM Arjun Erigaisi in King's Indian Defence.

While for many players fourth place finish is a good result, for Lalith it is not because he has won the ChessBase Online prize money tournaments twice and is truly on of the best blitz players in India. 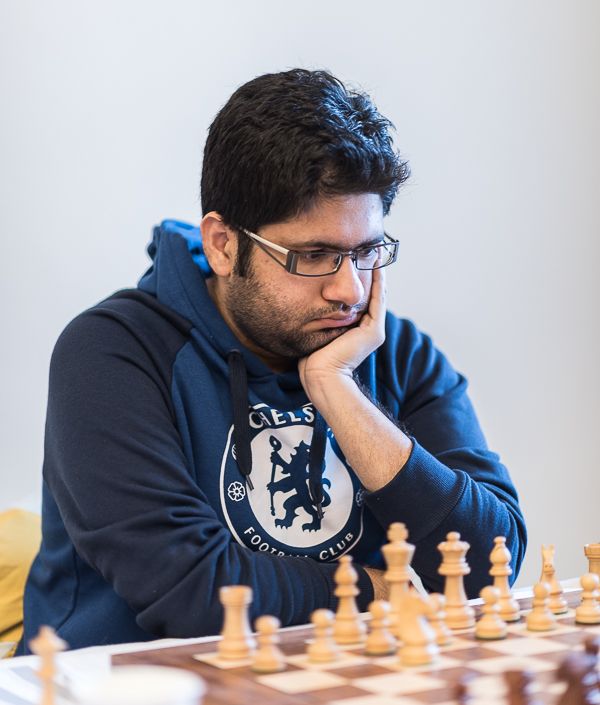 IM Hemant Sharma of Delhi played a fantastic tournament scoring 7.5/10 and secured 5th position. Hemant also known as Arubaba is a regular player on Playchess. In this tournament he showed that having a feel of what it is to compete on Playchess can help you perform better. He had quite a long game of 88 moves against GM S L Narayanan in the 4th round which ended up in a draw:

GM Baskaran Adhiban did not have a good tournament, finished at 6th position | Photo: Lennart Ootes

GM Baskaran Adhiban was shocked in the first round when he had to settle for a draw against Pavan B N B (Loss2win). He suffered two losses in the tournament. One against GM S L Naranayan and the other against GM Debashis Das.

Adhiban fought back and finished sixth. After the tournament we contacted him and he said, "It was great and lot of fun, it would have been nice to win it of course. But I played too weak too slow against Debs and this other guy I lost :)" 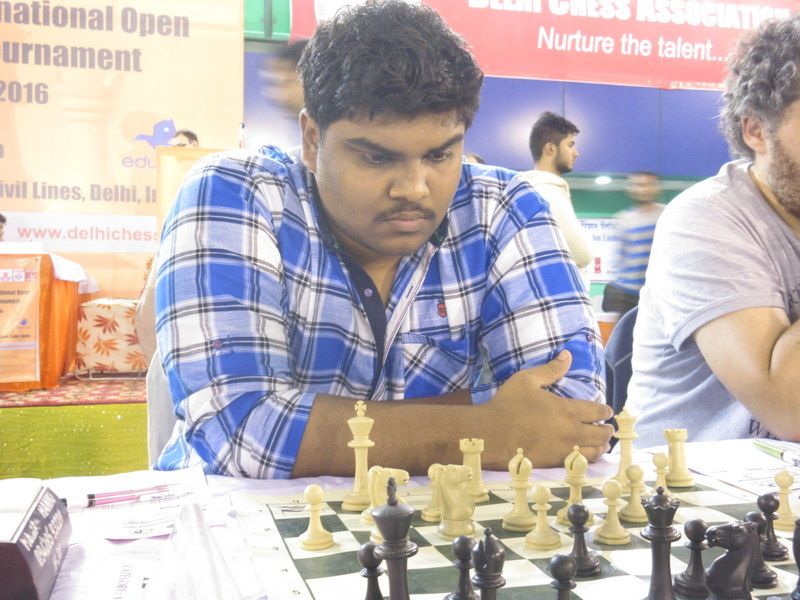 FM Mehar Chinna Reddy also scored 7.5/10 and secured 7th position due to a lower tie-break score. He defeated P Saravana Krishnan (mbachez90) in the 9th round in just 30 moves: 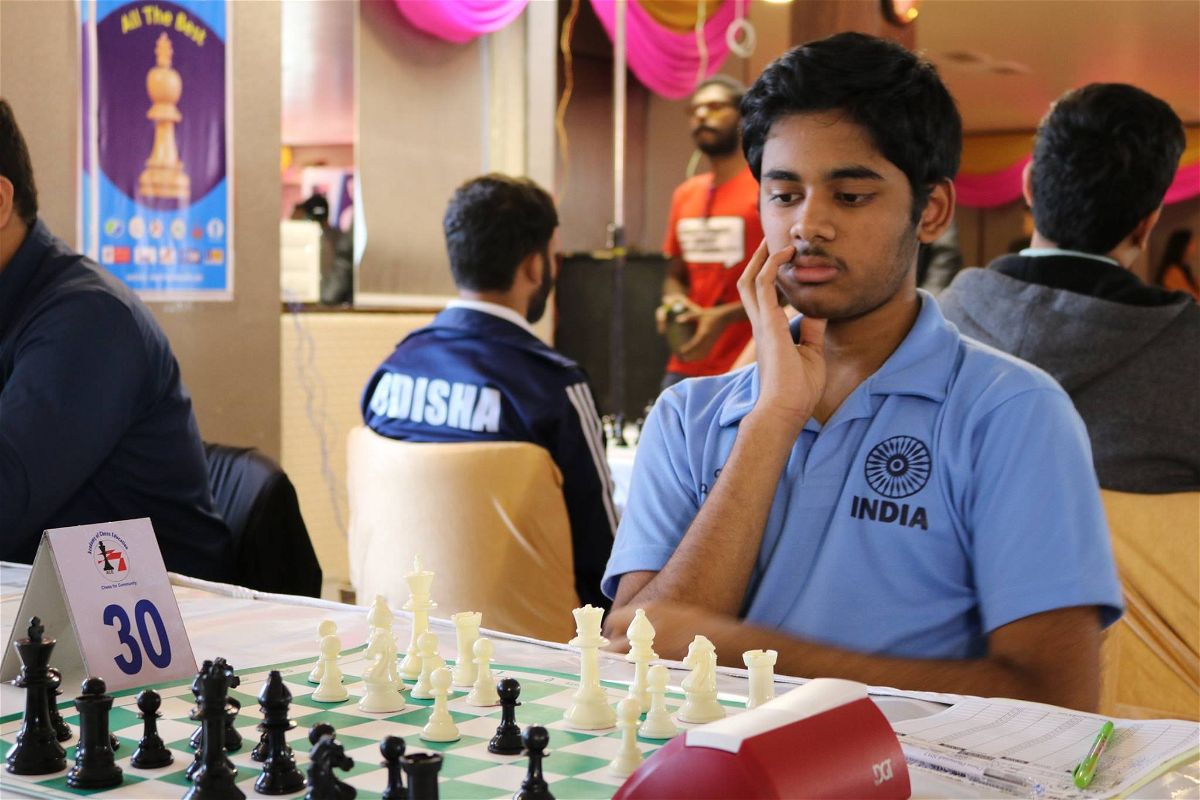 FM Arjun Erigaisi who is one of the youngest players to finish in top 10, played some fine games, scored 7/10 and he secured 7th position. He defeated two-time National Premier Champion GM Murali Karthikeyan in the last round:

Recently at a live commentary session in Mumbai when the secretary of All India Chess Federation Bharat Singh Chauhan was asked about who he thinks is a great talent in Indian chess apart from Praggnanandhaa and Nihal, he pointed out to Arjun and said that the young boy will become Telangana's first grandmaster! 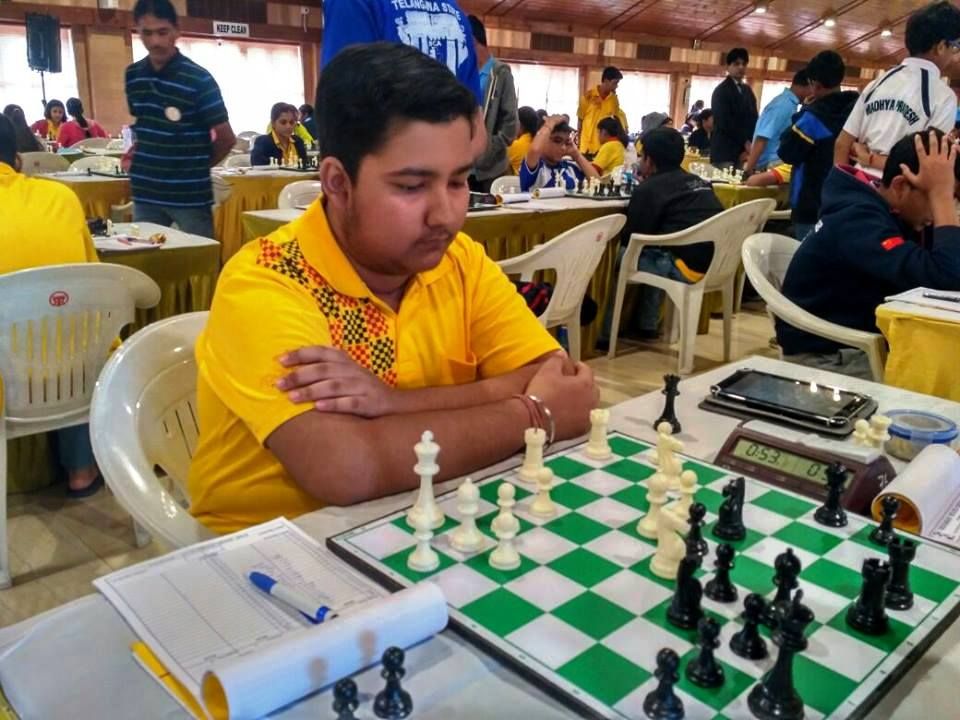 The other youngest player to finish in top 10 was Koustav Chatterjee who is a former Commonwealth under 13 gold medal winner. He drew with GM Aravindh Chithambaram (Refresh) in the 2nd round, defeated GM Abhimanyu Puranik (Pabh) in the 3rd round, defeated GM Debashis Das (Debashisdas) in the 4th round, defeated IM Sidhant Mohapatra (Sidhant) in the 5th round and defeated GM R R Laxman (LAXMAN). He had a quite an impressive tournament. His best game would be defeating reigning National Blitz Champion and Blitz king of India, GM R R Laxman. 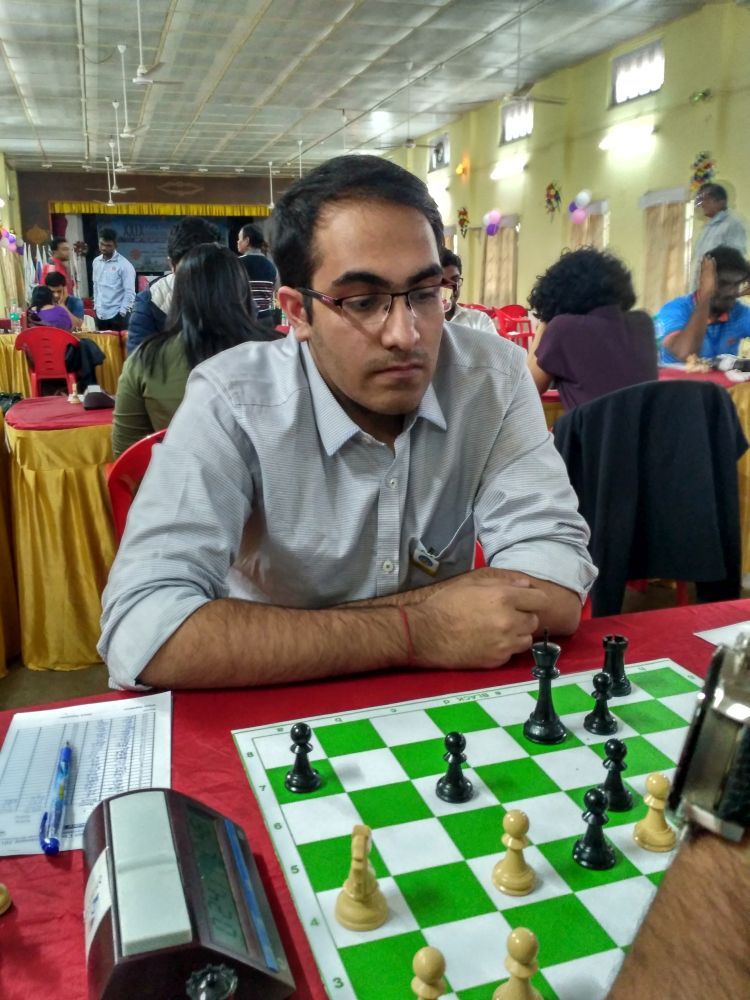 Former ChessBase Online Blitz and Bronze medal winner in Asian Indoor Games 2017 GM Vaibhav Suri finished at 10th position with a score of 7/10. He checkmated Swayams Mishra (Mr bh6) in the 5th round in just 34 moves 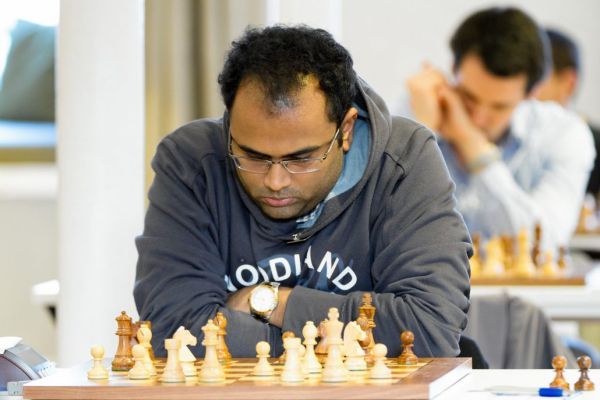 GM G N Gopal finished at 11th, although things could have been different if he did not have to endure technical issues

GM G N Gopal deserves a special mention as he could not play the first round due to some technical error. In spite of that, he scored 7.0/9 and managed to finish 11th. 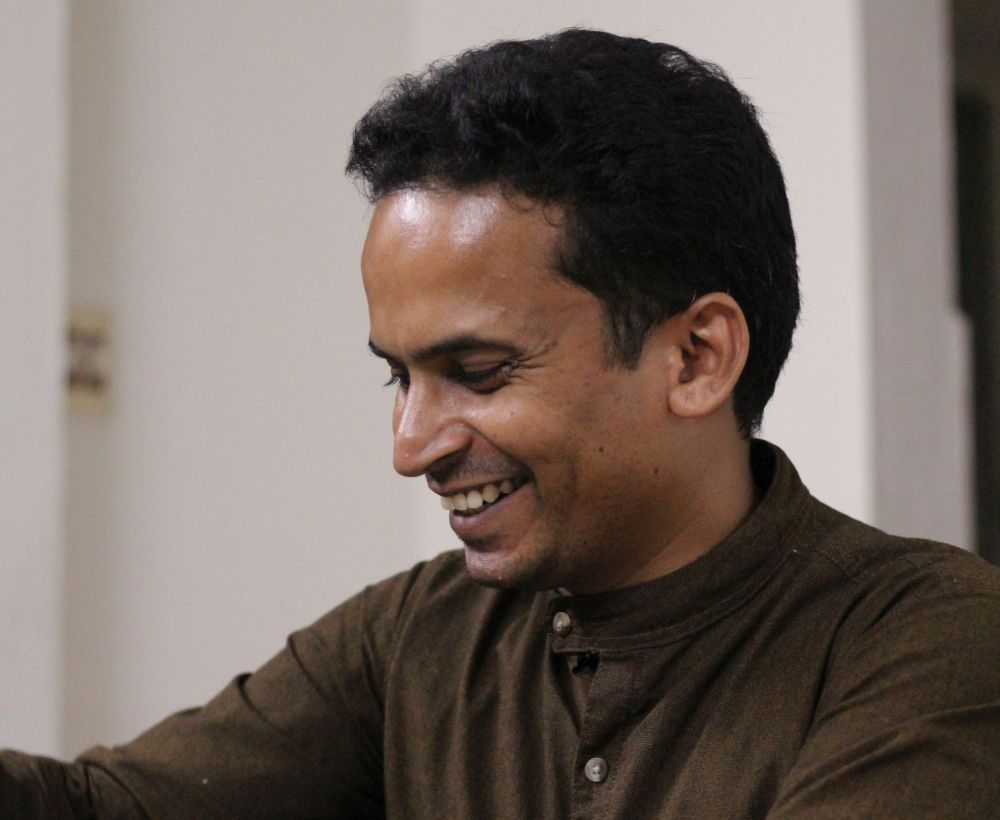 As always, we thank our tournament director and playchess head Halsagar Chincholimath for conducting the tournament smoothly

We (Ravi Teja&Anusha NLV) thoroughly enjoyed the tournament.it was exciting!