It is clear that chess in India is booming. The number of players taking up the sport is growing each and every day. In such a scenario, it is important that quality trainers are created in the country. With an aim to ensure that coaches get the right guidance AICF along with Sports Authority of India have put in place the FIDE Trainers' Seminar to be held at different parts of the country from time to time. From 4th-6th March, GM R.B.Ramesh and IM Vishal Sareen interacted with the coaches in Mohali. There were also 30 talented kids who received training from these excellent coaches. All in all a great initiative by AICF, SAI, Ramesh and Vishal Sareen.

Two months ago AICF came up with an initiative of conducting free of cost seminar at Guwahati for the students as well as trainers belonging to North-Eastern states and Andaman. This initiative offers the participants free boarding, lodging and FIDE fees. Now they went a step further and organized the next FIDE Trainers' seminar. This time the Sports Authority of India – All India Chess Federation Coaches Conference - FIDE Trainers' Seminar was organised at Learning Paths School, Mohali from 4th to 6th March 2018. In all 40 participants from 8 different States - Jammu & Kashmir, Punjab, Himachal Pradesh, Haryana, Uttarakhand, Uttar Pradesh, Chandigarh and Rajasthan participated in the event. 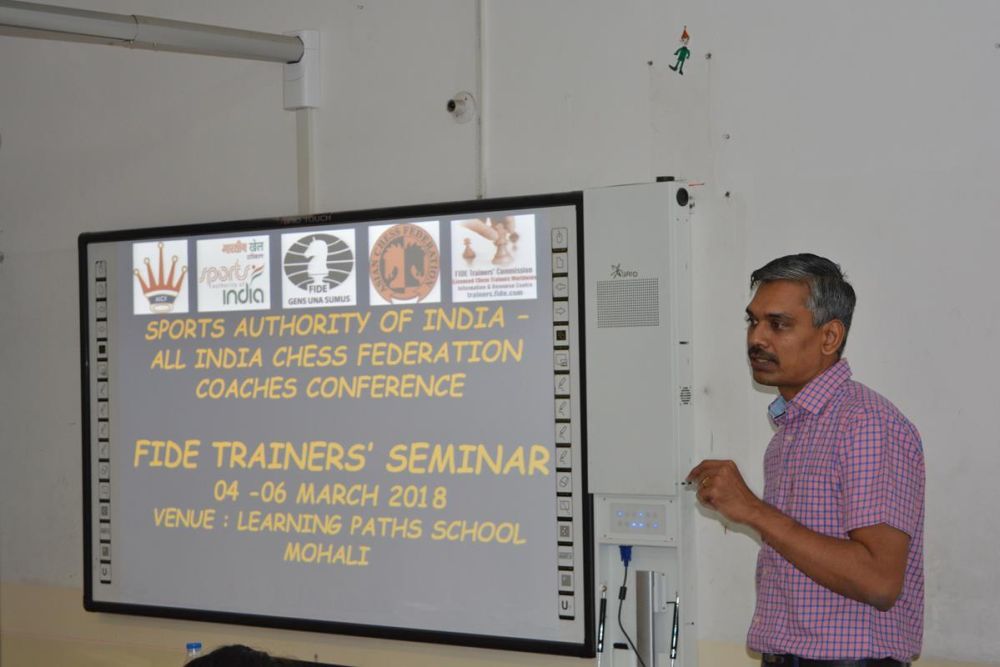 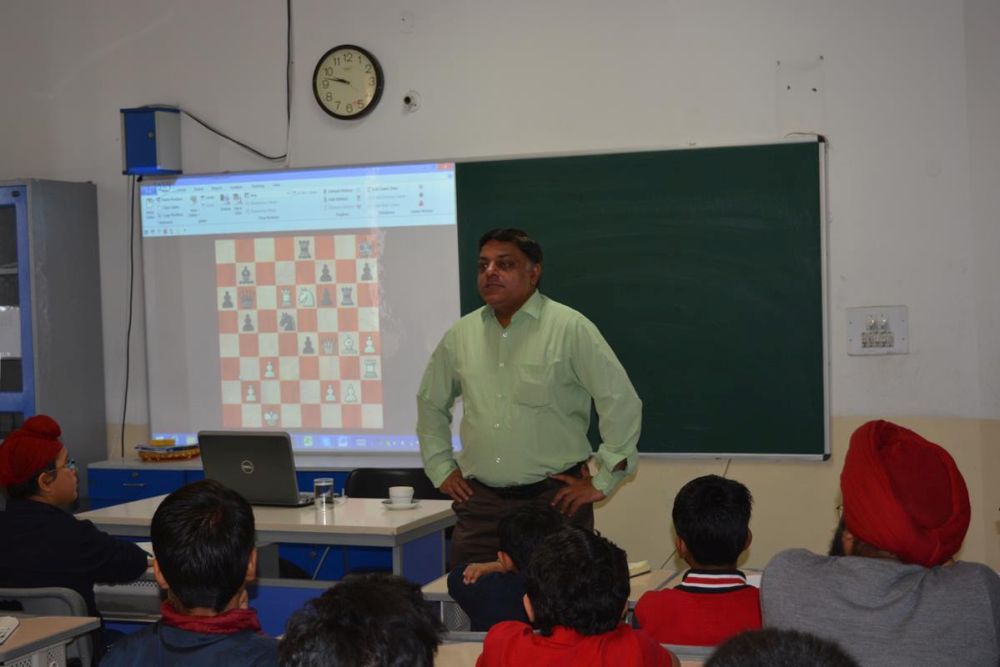 He was joined by IM Vishal Sareen | Photo: Gopakumar Sudhakaran

FIDE Senior Trainer's Grandmaster RB Ramesh and International Master Vishal Sareen were the lecturers of this three-day seminar and at the end of the seminar, an examination was conducted. Now based on the performances of the participants, various trainer titles according to World Chess Federation will be awarded by FIDE Trainers Commission with the approval of FIDE Presidential Board. 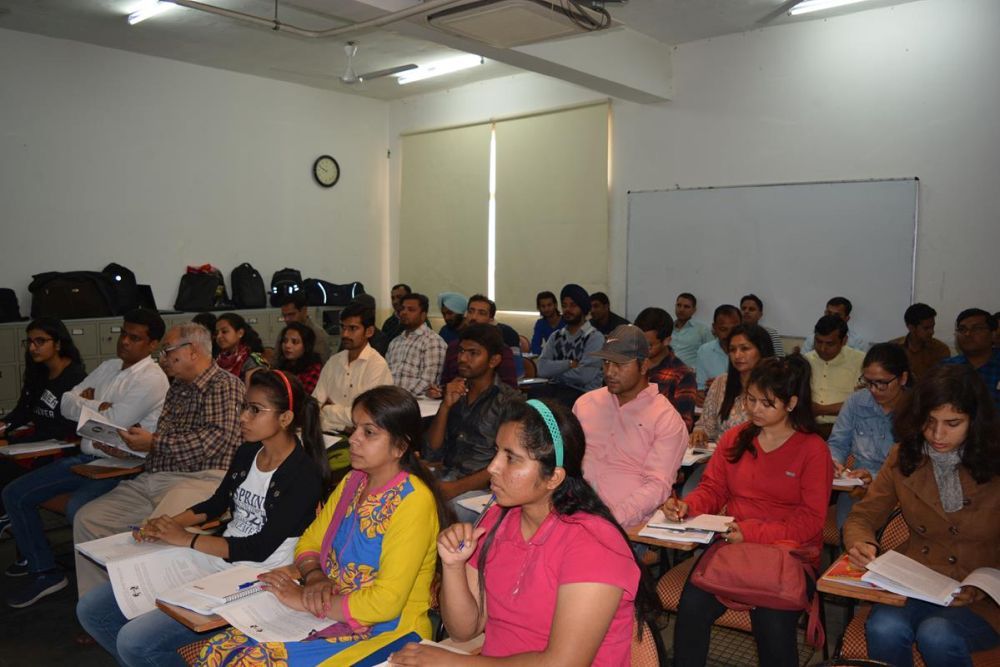 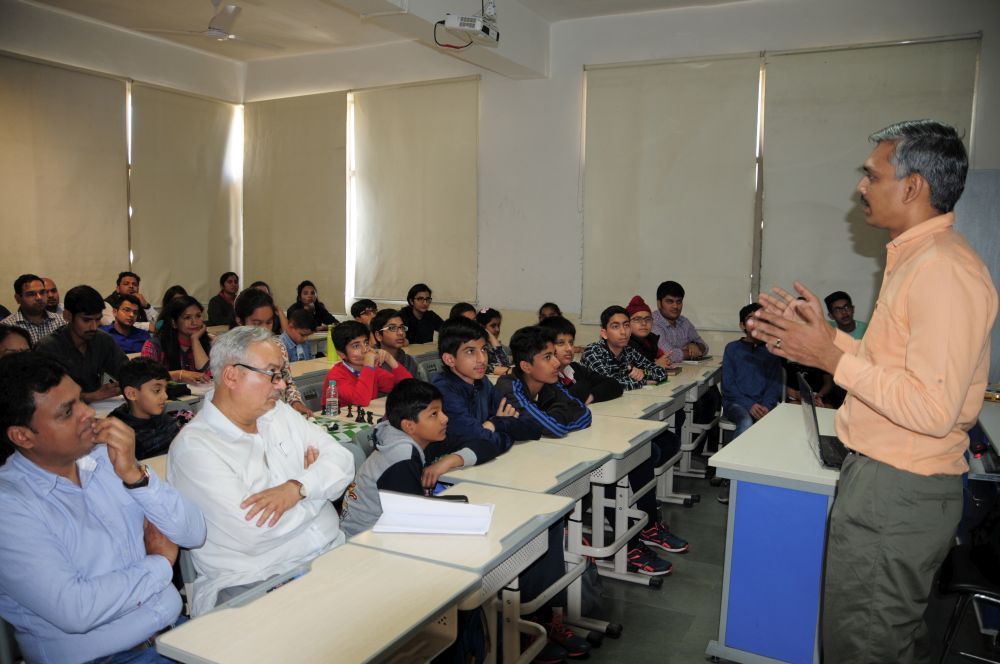 You can guess how fortunate everyone in the room is when you get to know that Ramesh will be taking a camp for the Indian national team from 16th of March onwards where Vishy Anand would also be participating | Photo: Gopakumar Sudhakaran 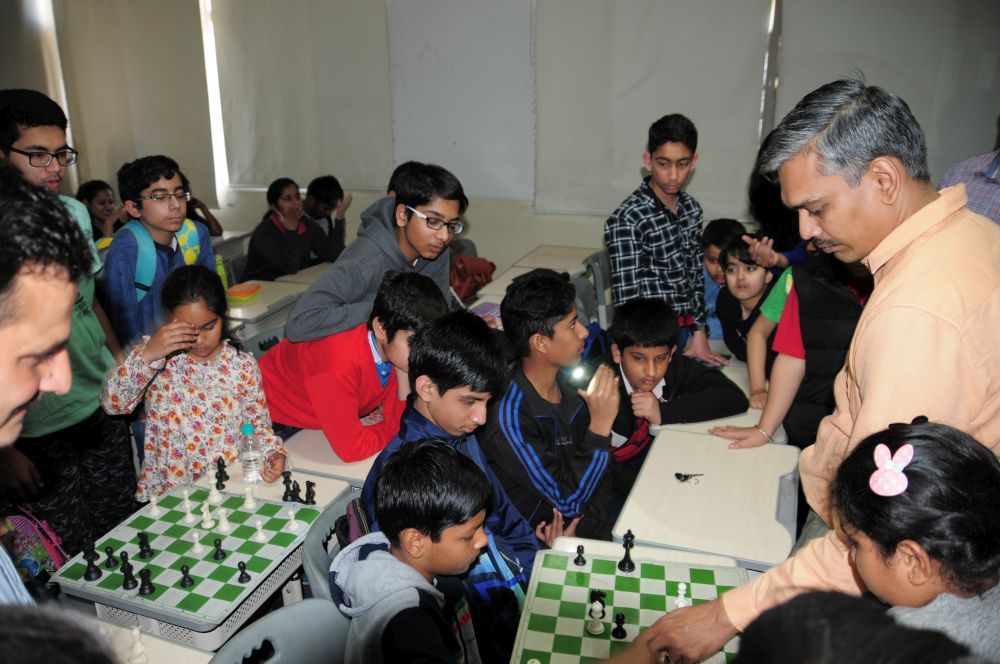 A special coaching camp for a group of 30 promising children from Punjab and Chandigarh was held simultaneously to hone the skills of the upcoming talents. The Northern States of India were covered through Mohali seminar and now the All India Chess Federation is aiming for more number of such seminars at other parts of the Country.

Talking to ChessBase India, GM R.B. Ramesh said, "It was a great experience. The Learning Path school provided very good infrastructure for the Trainers' seminar and the children's coaching camp. The coaches were eager to improve their teaching abilities and asked lots of interesting questions in this direction."

IM Vishal Sareen gave us a peek into what he taught at the seminar for the students.

Do you know the Evergreen game? If not, then first try solving the position below and then let Kasparov take you through the game with analysis: 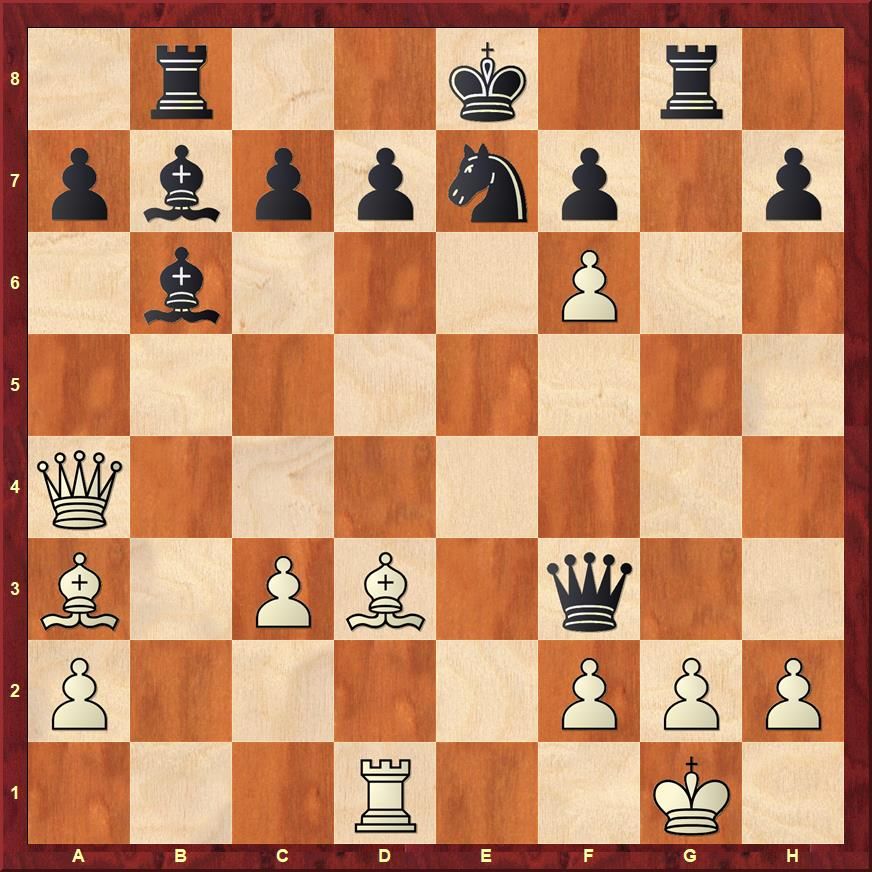 Anderssen - Dufresne, What should White play?

The immortal game was played by Anderssen against Kieseritzky. It was a game where White sacrificed two rooks and a queen to mate the black king! The end is picturesque. Try to see if you can find the fastest win for White: 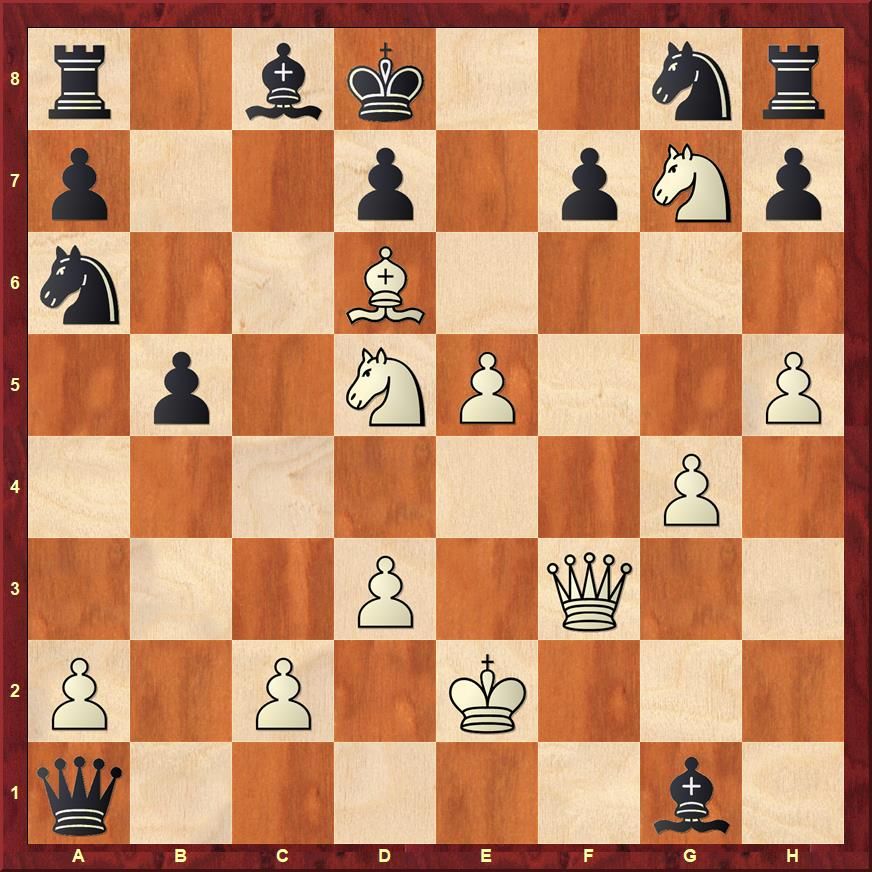 Perhaps, one of the most beautiful combinations that one can ever see was between Steinitz and Von Bardeleben. Before you see the amazing game played by the first World Champion, try and solve this one. Mind you, it's not an easy nut to crack! 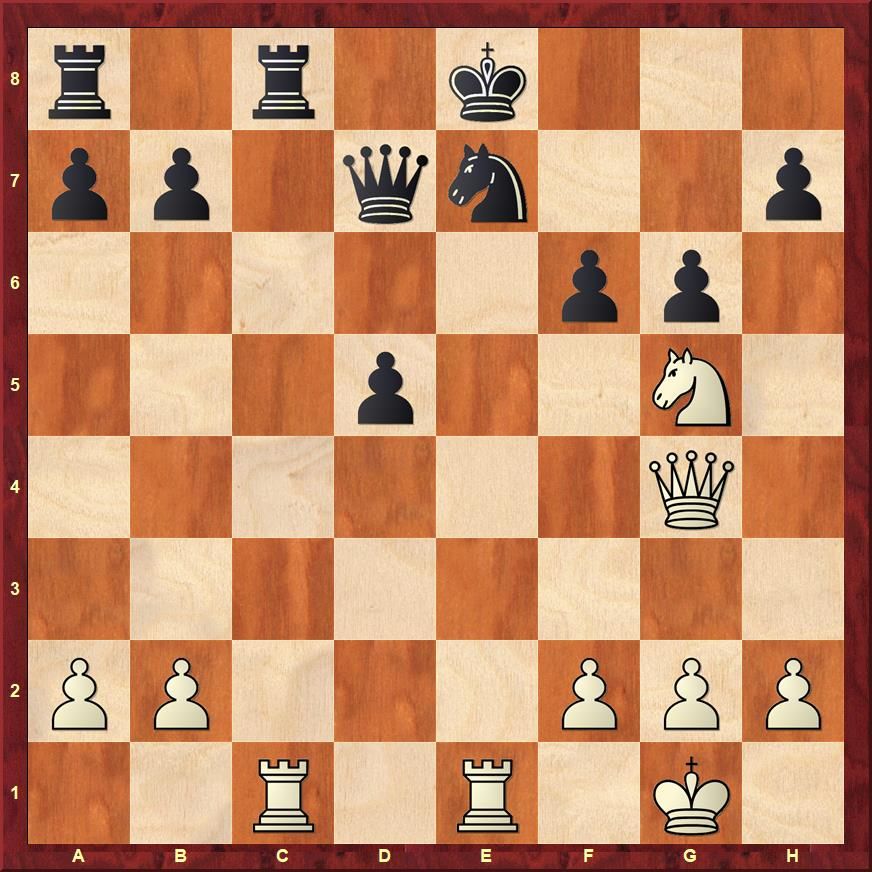 White to play. How did Steinitz finish off the game?

In the trainers' section, IM Vishal Sareen showed them concepts of development and how older players used it. The advent of Chess Psychology was taught through the Tarrasch - Lasker game where Lasker beats Tarrasch simply on the basis of psychologically outwitting his opponent. Play through this game with notes by Kasparov and understand how psychology plays a role in chess:

Speaking to ChessBase India, Vishal Sareen said, "It was quite a nice experience, enjoyed every minute of it. Special thanks to Secretary AICF Bharat Singh Chauhan, who is taking some great initiatives since he took the chair. Such seminars will go a long way in promoting chess in the country." 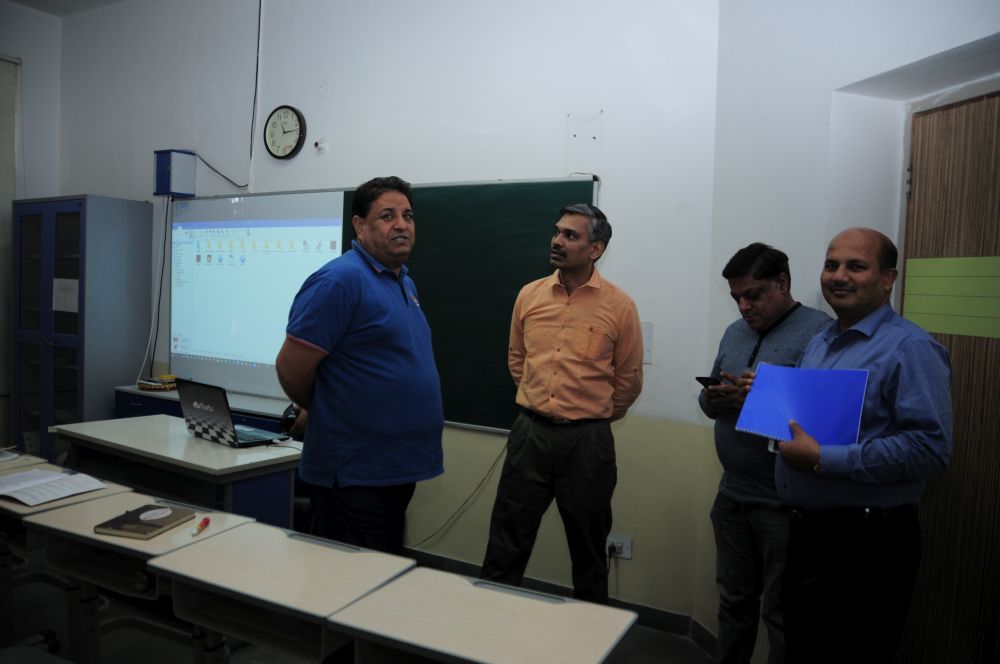 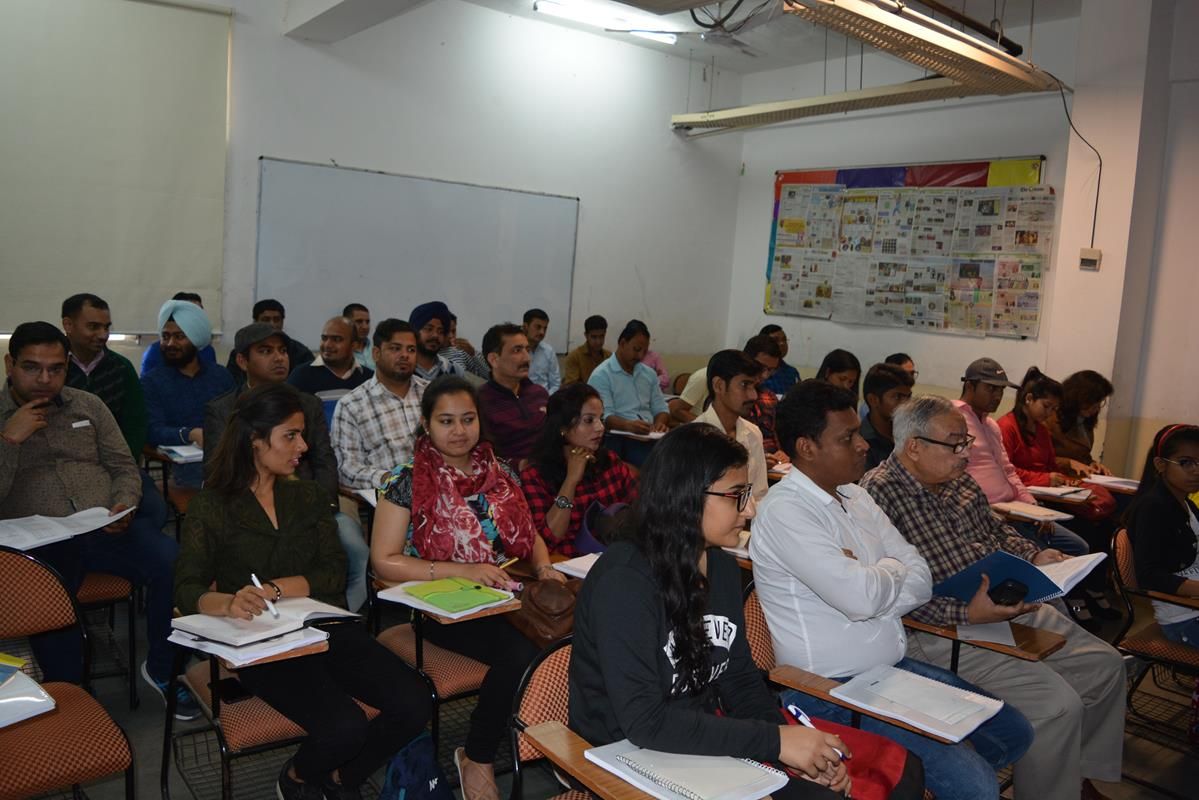 It is clear that from the way chess is progressing in the country we will need a lot of trainers within a few years. These seminars go a long way in carving out the best trainers | Photo: Gopakumar Sudhakaran

During the closing ceremony of seminar Chess in Schools programme was started in the states of Jammu and Kashmir, Punjab, Himachal Pradesh, Haryana, Uttarakhand, Uttar Pradesh, Chandigarh and Rajasthan. 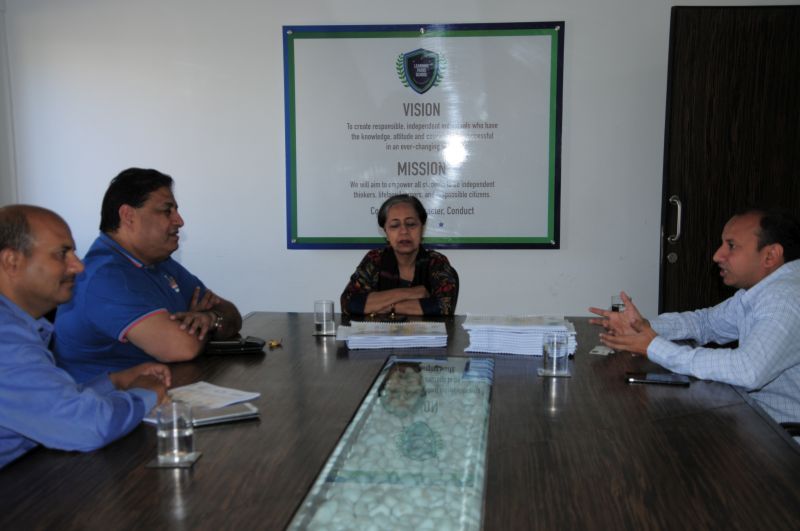 Bharat Singh Chauhan and A.K. Verma discussing with the authorities about the Chess in Schools Program | Photo: Gopakumar Sudhakaran

The All India Chess Federation (AICF) and some of the best minds in the country are working with great intent and enthusiasm to boost the sport in the country. This is going to make a big difference in Indian chess.