She might be the bottom-most seed of the tournament but she sure as hell can bite. In the fourth round of the Aeroflot Open, IM Eesha Karavade continued her stupendous run at the event scoring yet another win against a 2600+ GM. With this victory, she has earned herself the shared second spot on the leaderboard. Another player to beat a higher rated grandmaster and share the joint second spot with Eesha was GM Murali Karthikeyan. With the white pieces, Karthikeyan took down the fourth seed of the tournament, Rauf Mamedov in a 77 move marathon. We have an illustrated report with interviews and annotated games.

In our previous report, we mentioned how, despite being the bottom-most seed in the tournament, Eesha Karavade took on some world-class grandmasters in the first three rounds and scored 2.0/3. Round four pitted Eesha against another GM rated above 2600, Rinat Jumabayev. And yet again, she overcame a rating difference of more than 200 points and emerged victorious.

With the white pieces, Eesha essayed a rare sideline in the Sicilian Defence which eventually transposed into the Rossolimo variation. As per her post-game interview, she had no clue what her opponent might open with and, therefore, deploying a sideline seemed to be the way to go. Quite early in the game, Eesha was forced to give up the right to castle but she had compensation in her opponent’s isolated doubled pawns. 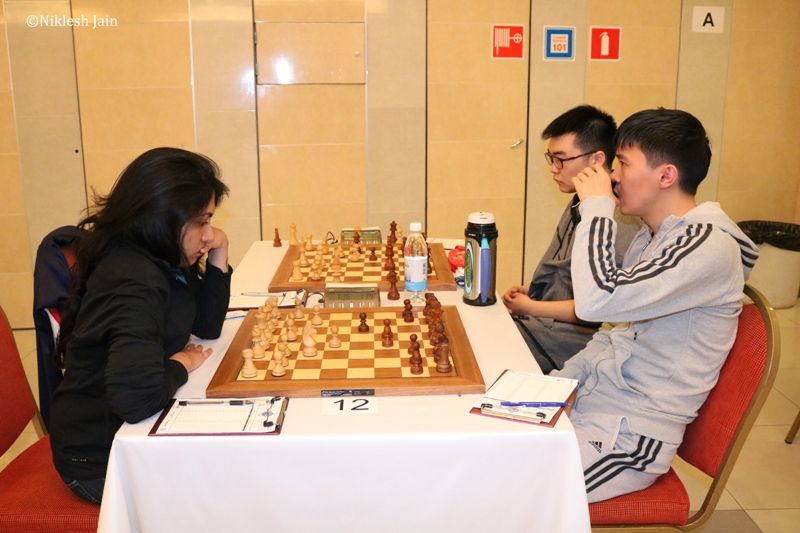 From playing and offbeat opening to defending tenaciously, Eesha did all within her might to bring home the full point | Photo: Niklesh Jain

The complex middle game that was reached made both players shed a significant amount of time off their clocks and were in severe time trouble. Jumabayev was in total control of the position for the most part of the middle game but on the last move of the time control, an unfortunate blunder by the Kazakh GM lost him a full piece. He limped on for nine move moves desperately trying to create complications but the Indian IM held her nerves well and forced an exchange of queens to put an end to all tricks. With this win, Eesha has put herself in the joint second spot on the leaderboard.

ChessBase India would like to thank WIM Angela Franco for annotating this game.

Another Indian sharing the second place on the leaderboard with Eesha is GM Murali Karthikeyan. In round four, Karthikeyan scored his third win against the fourth seed of the tournament, GM Rauf Mamedov. This game also kicked off with a Sicilian Rossolimo and featured a blunder by the higher rated player towards the end of the first time control. 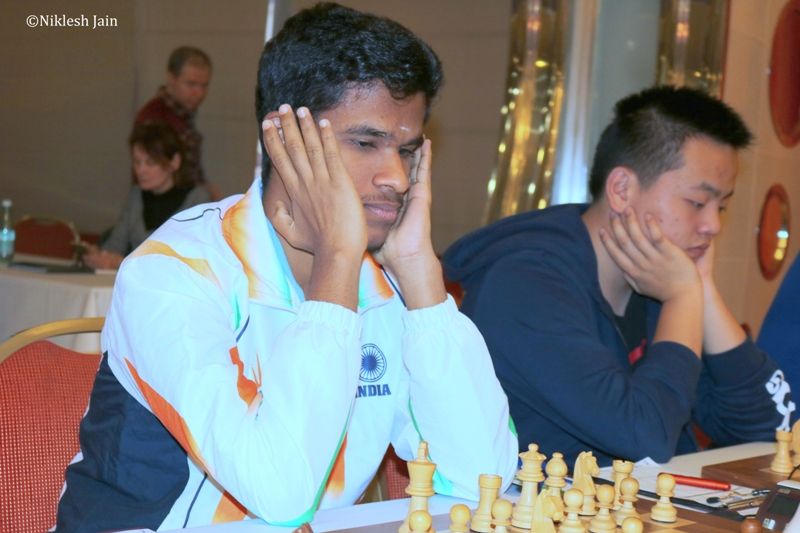 Karthikeyan vs Mamedov was a 77 move marathon which ended with a win for the Indian | Photo: Niklesh Jain

Karthikeyan sacrificed a pawn early in the game due to which Mamedov got a strong central passer. But Mamedov also fumbled and the position had turned equal again when the Azeri GM gave up an exchange to thrust his passer towards the queening square. This turned out to be a fatal error as Karthikeyan was able to block the pawn easily and hack it off the board. The game went on for around twenty more moves when Mamedov’s knight was trapped in a rather funny manner on the edge of the board. 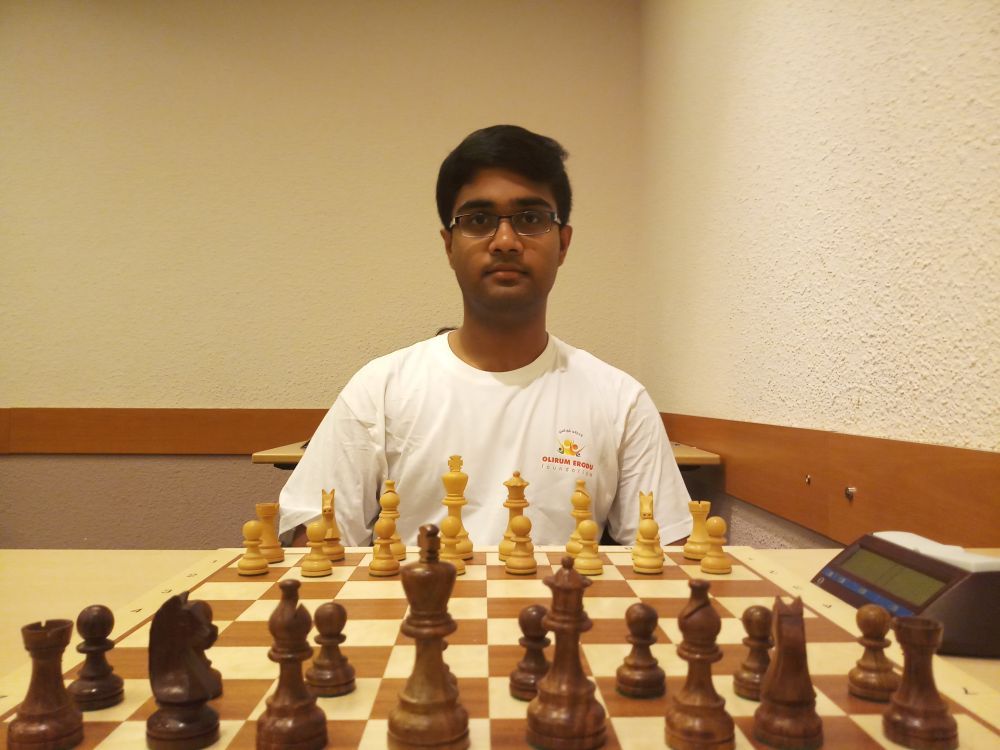 With the white pieces in a Sicilian Najdorf, the former went for broke in the middle-game in an attempt to break through to his opponent’s king. Twenty-three moves into the game, Kotronias gave up a full rook first and then a bishop to rip open the pawn shelter of the opposing monarch. As planned, black’s king shelter was indeed ripped off but there was no knockout blow in sight. Just two moves later, Iniyan gave up some of his extra material to force an endgame where he was a piece up and a resignation followed soon afterwards. 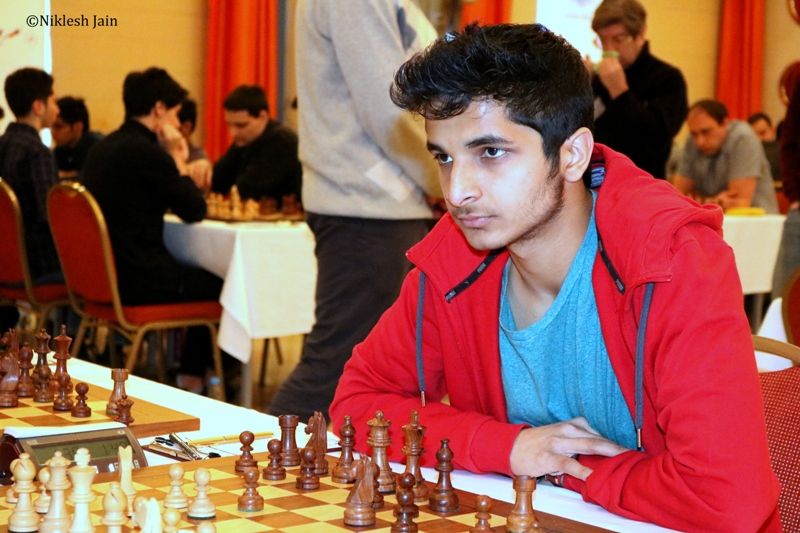 Four rounds into the tournament, Vidit Gujrathi is yet to score his first win | Photo: Niklesh Jain

The second seed of the tournament, Vidit Gujrathi, was unable to break his drawing streak in the fourth round as well. Playing with black against GM Xu Yinglun, the Nashik lad was able to equalize with ease in a Gruenfeld Defence but that was all he could do. After a mass trade of pieces in the middle game, Xu found a neat temporary exchange sacrifice on the 26th turn that would have left both players with rooks and bishops of opposite colour and more pawn trades in the forthcoming moves. Players agreed to sign the truce at this point. 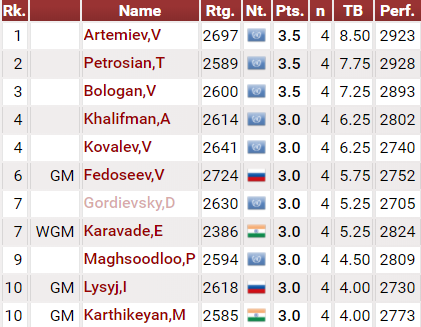