The Dubai Open 2018 holds tremendous interest for Indian fans. Apart from the fact that we have three leaders on 3.0/3, we also have 73 participants out of 164 players! Truly mind boggling! Ganguly, Sethuraman and Narayanan S.L are on top with 100% score. But our attention was caught by the resurgent Chennai GM Sundararajan Kidambi. We call him resurgent because he has been able to show a string of fantastic performances off late. At the Dubai Open 2018 he beat his 2700 opponent Bassem Amin. How did Kidambi resurrect his chess career? We bring you the secret!

"How to improve at chess" is a question that a lot of players like to ask. But when someone gives a genuine answer, it puts most of the questioners in a difficult situation. That is because the route to improvement is tough. It is a path filled with abstinence, great will power and extreme hard work. GM Sundarajan Kidambi decided to walk on this path a couple of years ago. Kidu (as he is lovingly called by his friends) was a highly talented player in his younger days. He became a GM in 2009 at the age of 27. However, his chess improvement graph plateaued somewhere after that. No matter how hard he tried he couldn't improve his level of play. Something was going wrong. The normal thing to do in such a situation is to slowly and steadily reduce the focus on chess and turn your attention towards coaching. Being a grandmaster and a sincere tutor he would surely have become one of the best trainers in India. But Kidambi chose the tougher path - the journey of trying to find the "Road to chess improvement." 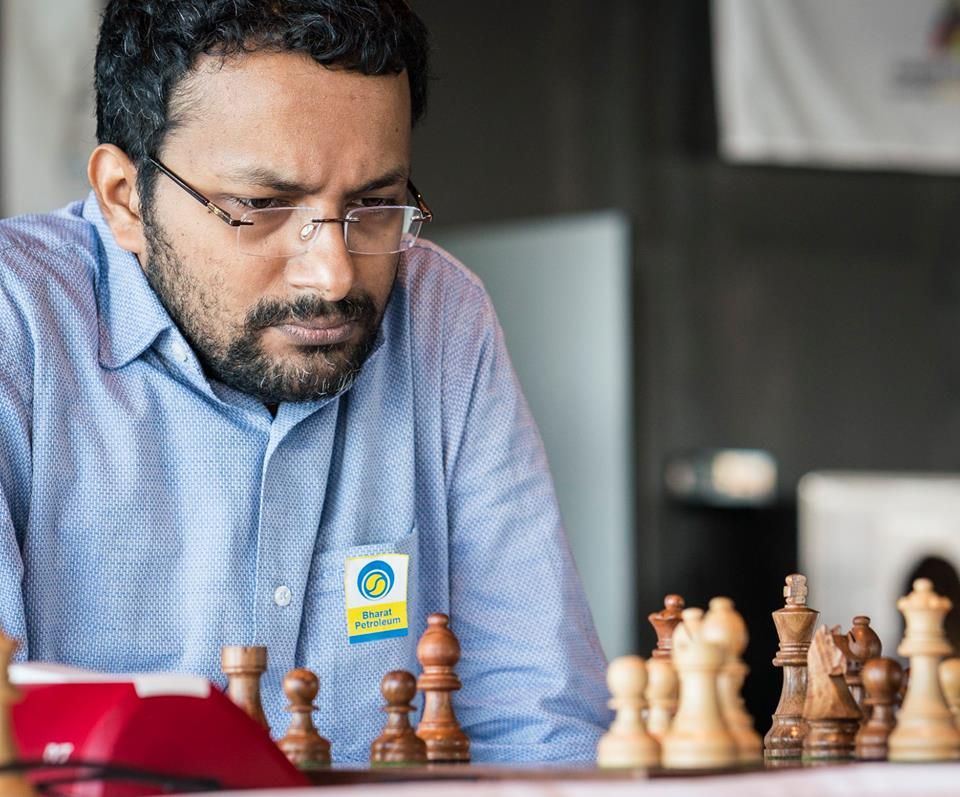 Sundararajan Kidambi chose a path of difficulty when there were much easier ways out | Photo: Lennart Ootes

Sundararajan Kidambi decided to go on an indefinite engine-fast! He would not use chess engines for any of his chess preparation! Now to some this might seem like insanity. In today's world where every opening novelty is found by the engines how was this GM from Chennai going to survive? But Kidu had figured that engines had had a detrimental effect on his game. His brain was not working at its optimum level. For him it was more important that he could bring back 100% mental agility than find those novelties, which even after being played could not be followed up by him in the best possible manner.

Now, it is not a cakewalk to stay away from engines once you decide it. You are all the time worried whether the move that you are thinking about is a good move or not. But the trick is to overcome this self-doubt and start believing in your abilities. It is possible that the moves your brain comes up with are not the best, but then even Magnus Carlsen is not able to match Stockfish, Houdini or Komodo's level. You just accept the fact that finding those computer like perfect moves is not what chess is all about and you start making your brain do a lot of thinking. Overall it helps you become a stronger chess player and keeps your mind agile. After having a tough time for many tournaments, Kidambi's approach finally started to bear fruits. This is how he did at the recently concluded Reykjavik Open. Draws against Eljanov, Adhiban and Cornette and win over Joshua Friedel to remain unbeaten in such a strong event was a great feat. 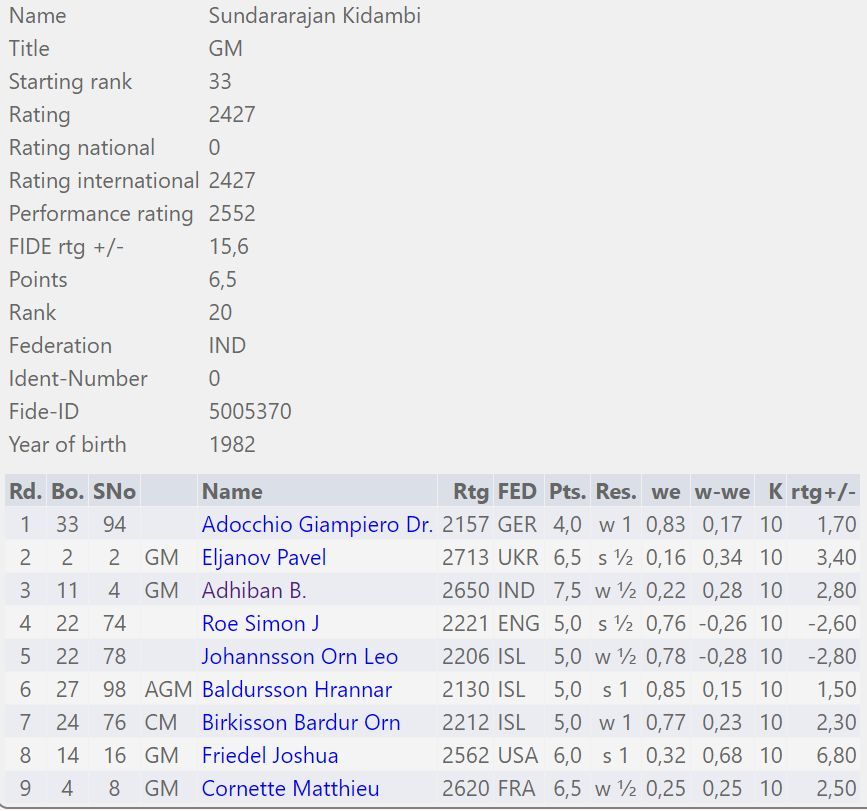 Kidambi's performance at the Reykjavik Open 2018

Kidambi also makes sure that he shares his chess knowledge with the chess world through his blog. So he is even ready to publish his computer-free analysis on a public forum! Now that takes some guts! After coming back from Reykjavik, the Chennai GM wrote an article on his blog, prepared some chess, took some rest and finally made his way to the Dubai Open where he would face some of the best GMs in the world. His second round opponent was the very strong African GM Bassem Amin. Amin is the first African player to have crossed 2700 Elo on the FIDE rating list. Kidambi, with the white pieces, played a beautiful game of chess to win against Bassem. As a mark of respect I decided to analyze the game without any engine assistance, just like how Kidambi would have liked it!

In the third round Kidambi drew his game against the strong Russian GM Sergey Volkov and he will now he facing GM Leandro Krysa from Argentina in the fourth round. It will be fun to follow the games of a player who has taken such a bold path towards improvement in chess. If Kidambi is able to propel himself back into the 2500 zone and forward, we can be sure that his methods work!

India has quite a huge representation at the Dubai Open. 73 out of the 164 participants are from India. There are bound to be many upsets for sure. One game that caught our attention in particular was Chennai youngster Nikhil Maghiznan (2105) beating R. Praggnanandhaa in round one. The funny thing is that Followchess App did broadcast this game but the chess-results website shows that Nikhil got a walkover. What is the true story, we will have to find out. But we would just like to show you the game because it was an interesting one, even if it may not have happened! 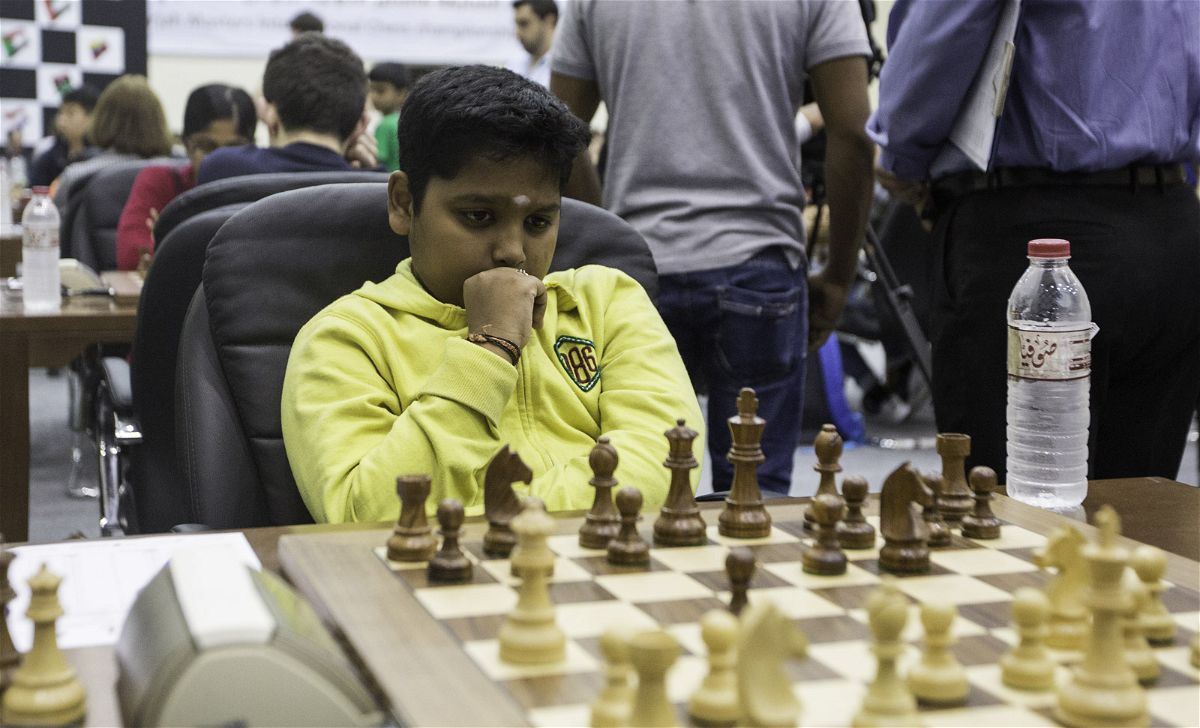 With three Indians at the top - Ganguly, Sethuraman and S.L. Narayanan, this is going to be an exciting tournament to follow. Not to forget that Sethuraman and Ganguly are in the race for the fourth and fifth spot in the Indian Olympiad team! So every rating point in this event matters.