The World Youth Championships 2018 came to an end with two medals for the Indian team. Divya Deshmukh from Maharashtra won the bronze in the girls under-14 section, while Sanskriti Goyal from Uttar Pradesh took home the bronze medal in girls under-16. When the final two rounds began nine Indian players had a chance for the medal but finally only two of them were able to finish in the top three. Places four to six were also given medals and the Indians who finished in this bracket were Aashna Makhija (6th in under-16 girls), L. Jyothsna (5th in under-14 girls), Tejaswini Sagar (4th in girls under-18) and Arpita Mukherjee (6th in girls under-18). In this report we analyze two important games of Divya and Sanskriti's final round and also tell you about a cheating accusation.

With two rounds to go, nine Indians were in with a chance to win a medal at the World Youth Championships 2018. At such high pressure events it is extremely important to finish well. Two Indians who won medals for the country - Divya Deshmukh in the under-14 girls section and Sanskriti Goyal in the under-16 girls section ended the tournament with a scintillating score. While Divya scored 4.5 in her last five rounds, Sanskriti went one step ahead and achieved 5.5/6. 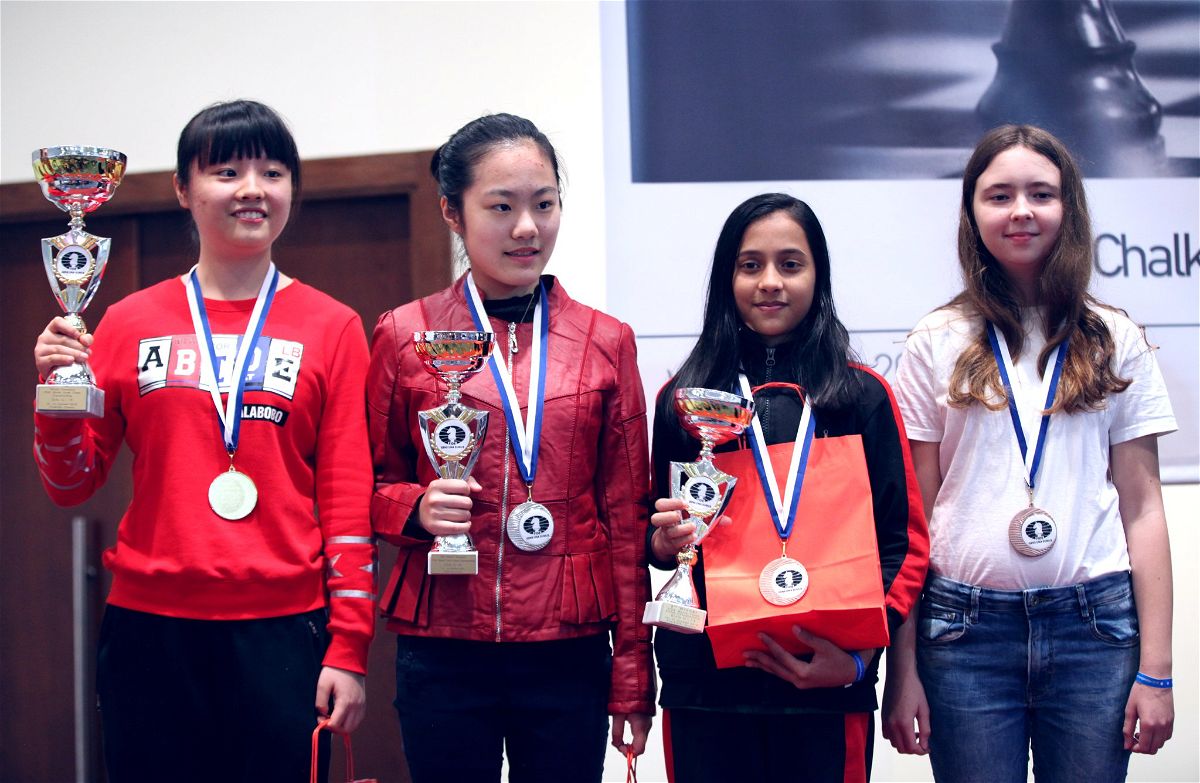 Divya Deshmukh won the bronze in girl's under-14. For the youngster, who has won multiple gold medals, this was not the best result. But after the start she had at the event, Divya would take the bronze! | Photo: Anastasia Karlovich 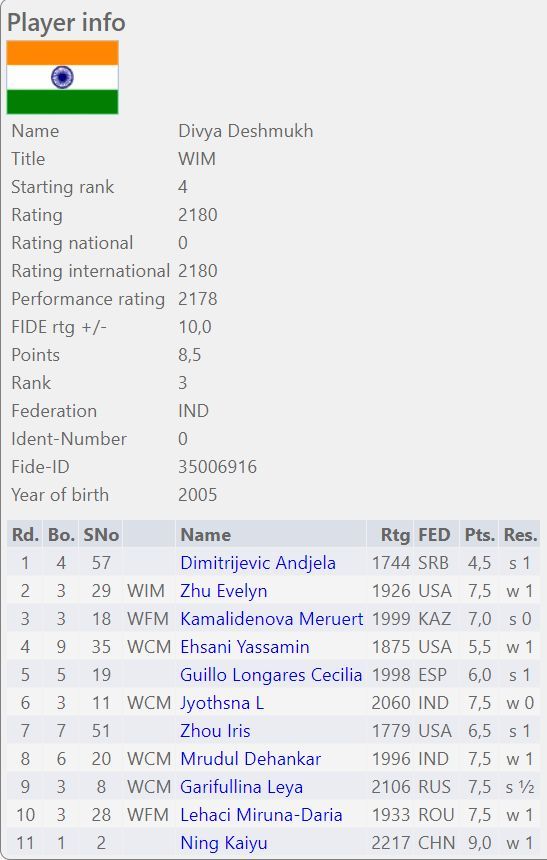 Look at that sprint towards the end!

The thing that differentiates Divya from everyone else is her fearlessness. Be it a GM or a super GM, she just plays normally without getting over-awed by the situation. Hence, when she faced the leader of the tournament Chinese girl Ning Kaiyu in the last round, she took it as an opportunity to inflict the eventual champion with one final defeat! Ning was on 9.0/10 and had already assured herself of the gold. Divya played an interesting game from the white side of the French and beat her Chinese opponent. Here's one critical position from the game: 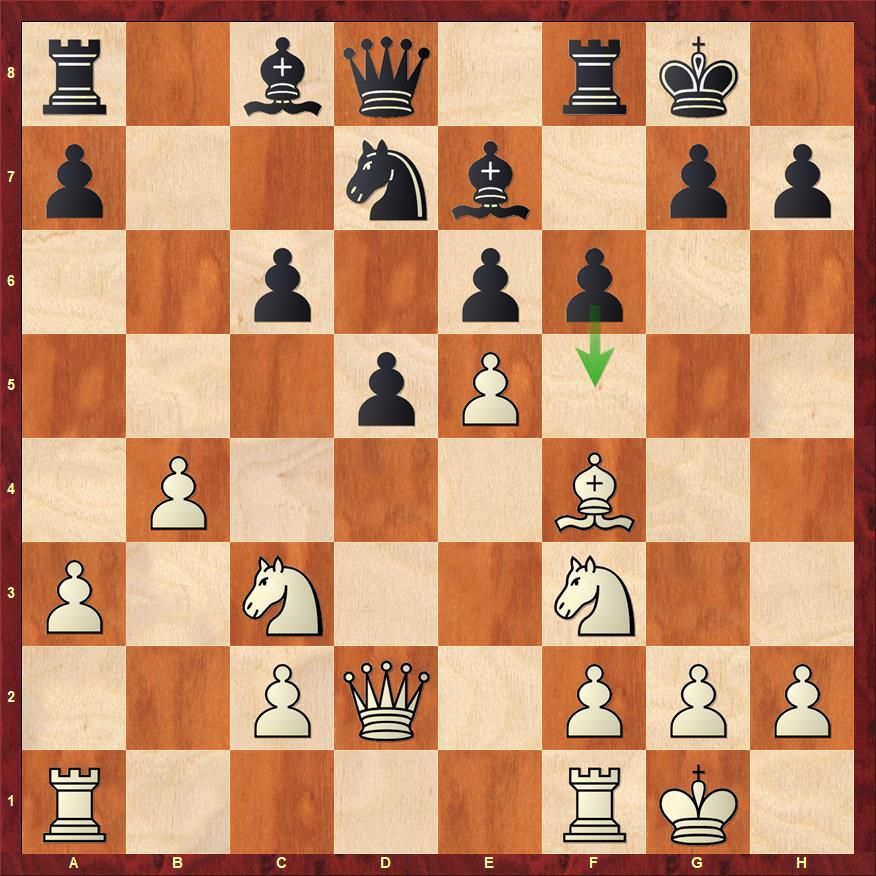 It is Black's move and the tension in the centre is in Black's favour, because she can take any time on e5 and at the same time she has no problems as exf6 is completely fine for her. The best plan now is to keep the centre fluid and relocate her knight to c4 with ...Nb6. The knight will sit really well on c4 and along with the bishop on e7, the move ...a5 will open up the position and Black will be in driver's seat. Instead Ning played the move ...f5 which was a positional mistake and after that Divya played a fine game to win the bronze medal. 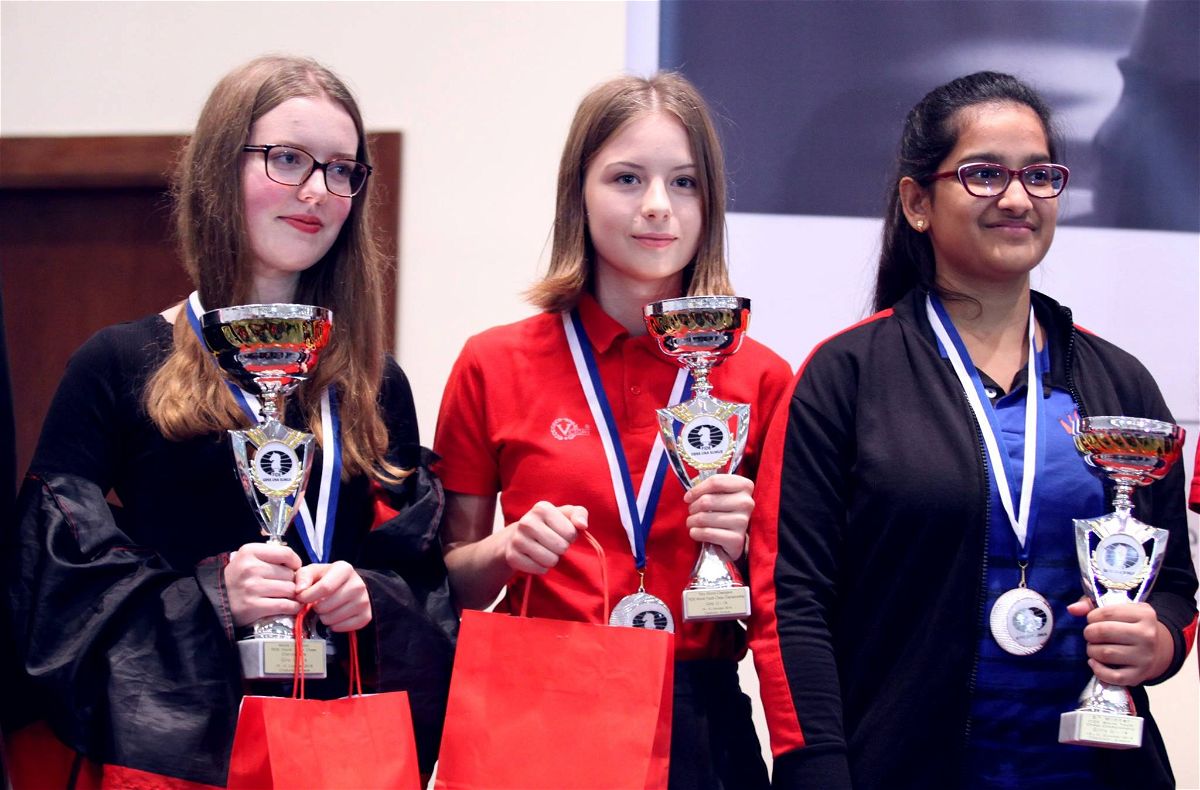 Sanskriti Goyal started as the 40th seed in the under-16 girls section. With a score of 2.5/5, nothing really was going her way. But she is a fighter and a girl who never gives up. Sanskriti pulled up her socks and started notching up one win after another. Before you knew it she had scored 5.5 points in the last six rounds and had won the bronze medal with a score of 8.0/11. What a great comeback. We asked her coach GM Himanshu Sharma about the best qualities of the young girl. The first GM from Haryana was quick to point out, " Sanskriti is a dedicated chess loving kid. She has good willpower and works very hard. I made her daily schedule and she follows it regularly. She is eager to learn new ideas and tries to implement them in her games. Right now she has a lot to improve as a chess player, but I think these are her best qualities." 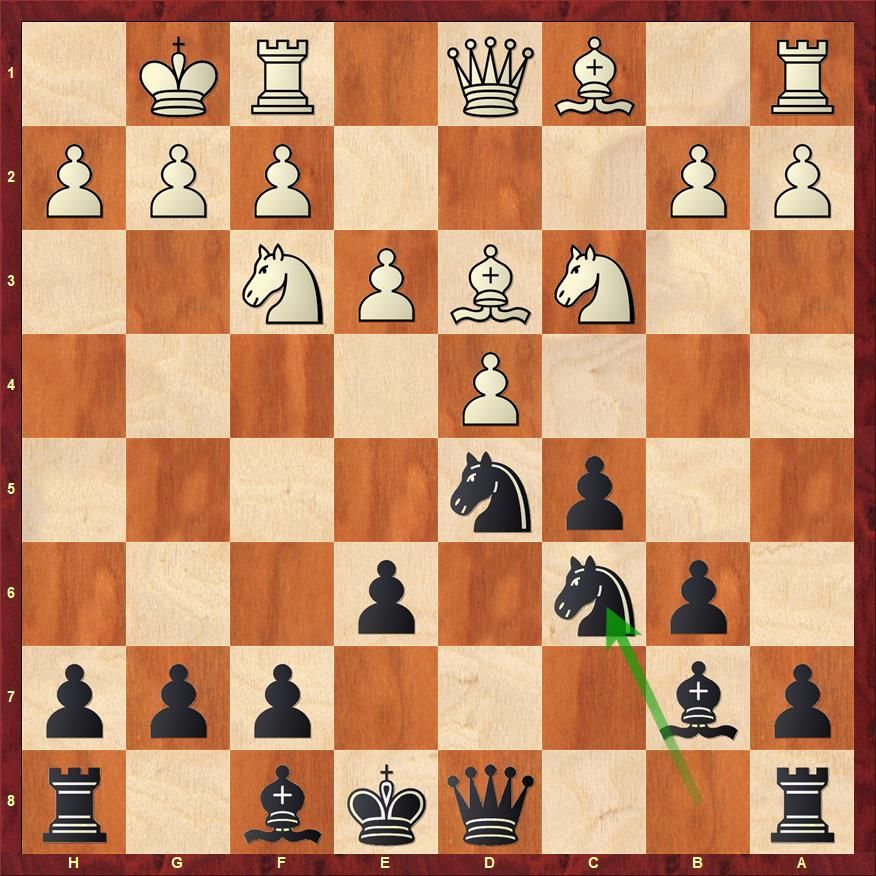 Sanskriti has just played her knight to c6 which is ambitious, to say the least. Her bishop is still on f8, the king is still in the centre. How should White continue here?

Jovana Srdanovic showed a lack of understanding for the dynamics in the position when she went for the move a3. It just meant that Sanskriti could complete her development and come out with a good position out of the opening. There were many better ways to contonue for White which I have given in the notes to the game below. 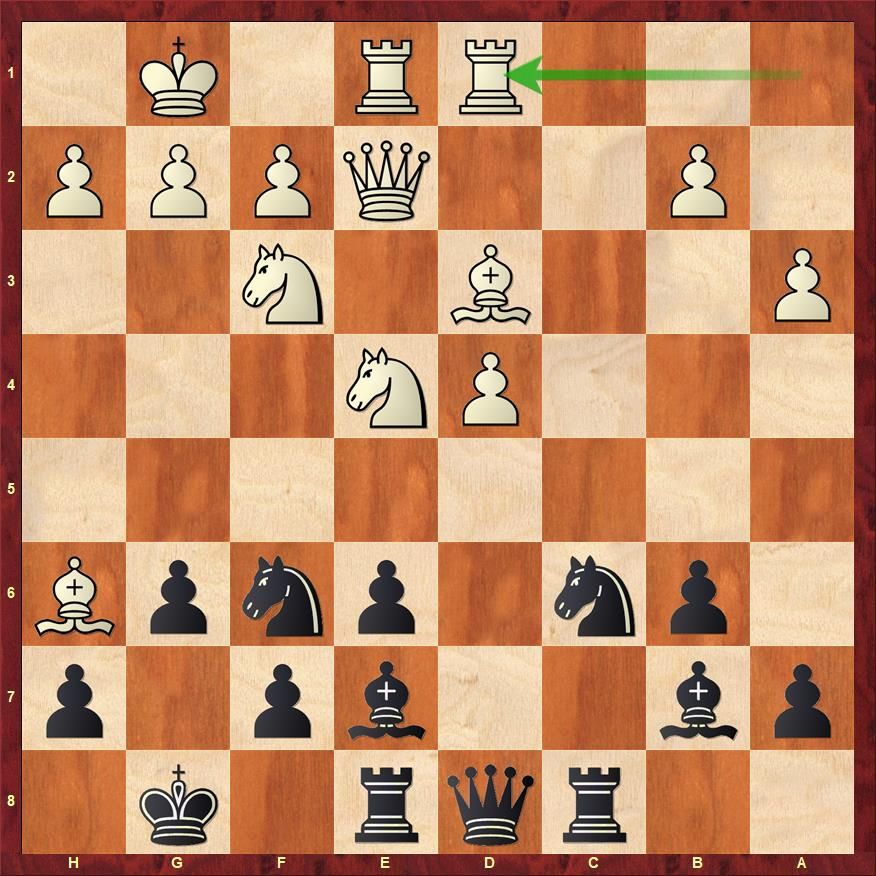 White has just brought her rook from a1 to d1. What would you do if you were in Sanskriti's shoes?

Most of us would not even consider the move Nxd4. Wasn't the rook brought from a1 to d1 exactly to prevent the capture of the pawn on d4. Those of us who would consider ...Nxd4 as a move would doubt ourselves if we were seeing everything correctly. But that's the difference between a strong player and normal player. The strong player has self-belief. Sanskriti calculated ...Nxd4 Nxd4 Qxd4 and looked very hard for any sort of discovered attacks. She realized nothing was working and made the move. This brave decision is what helped her win not only the game, but eventually the bronze medal. 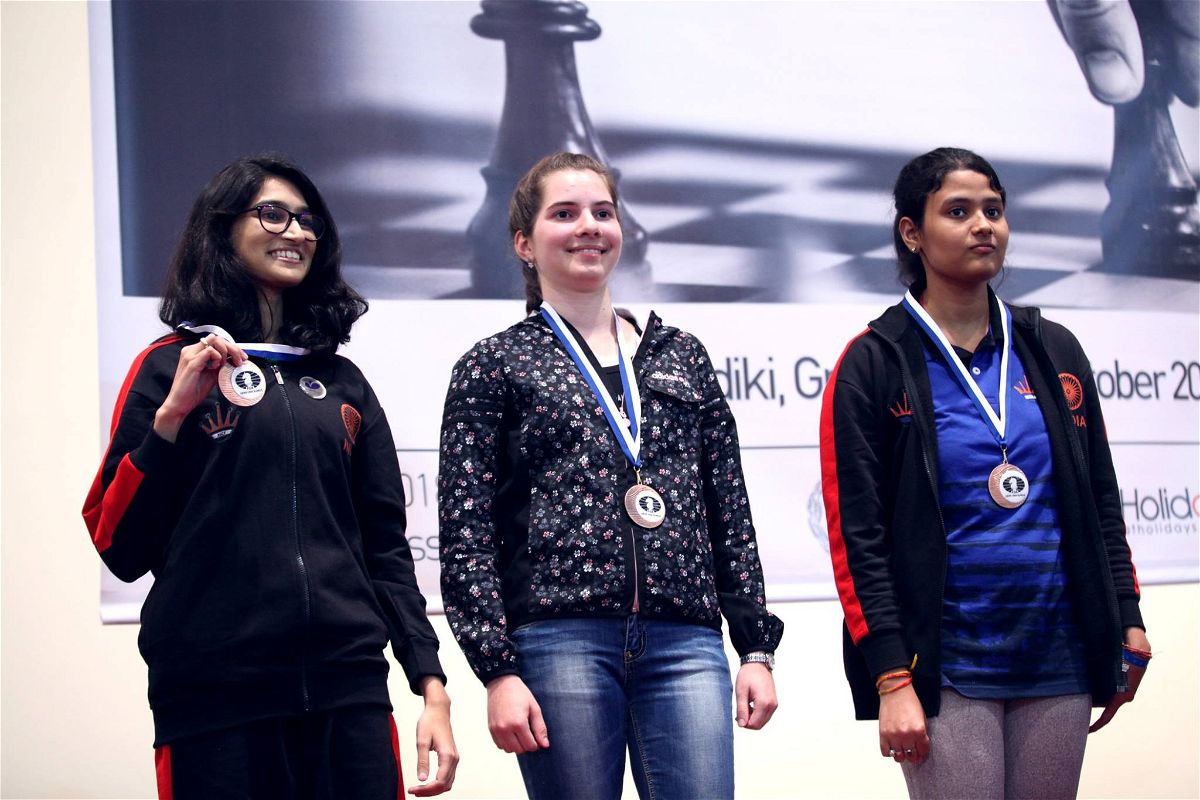 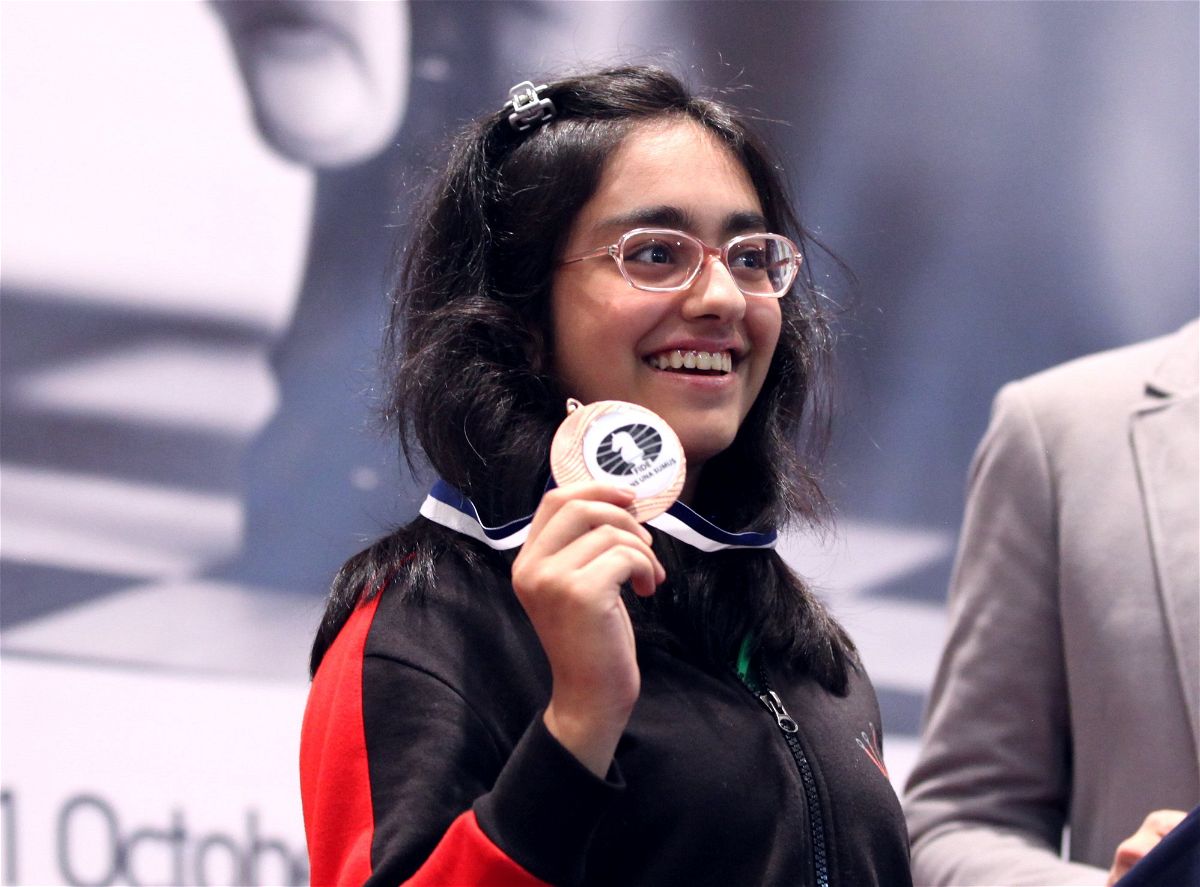 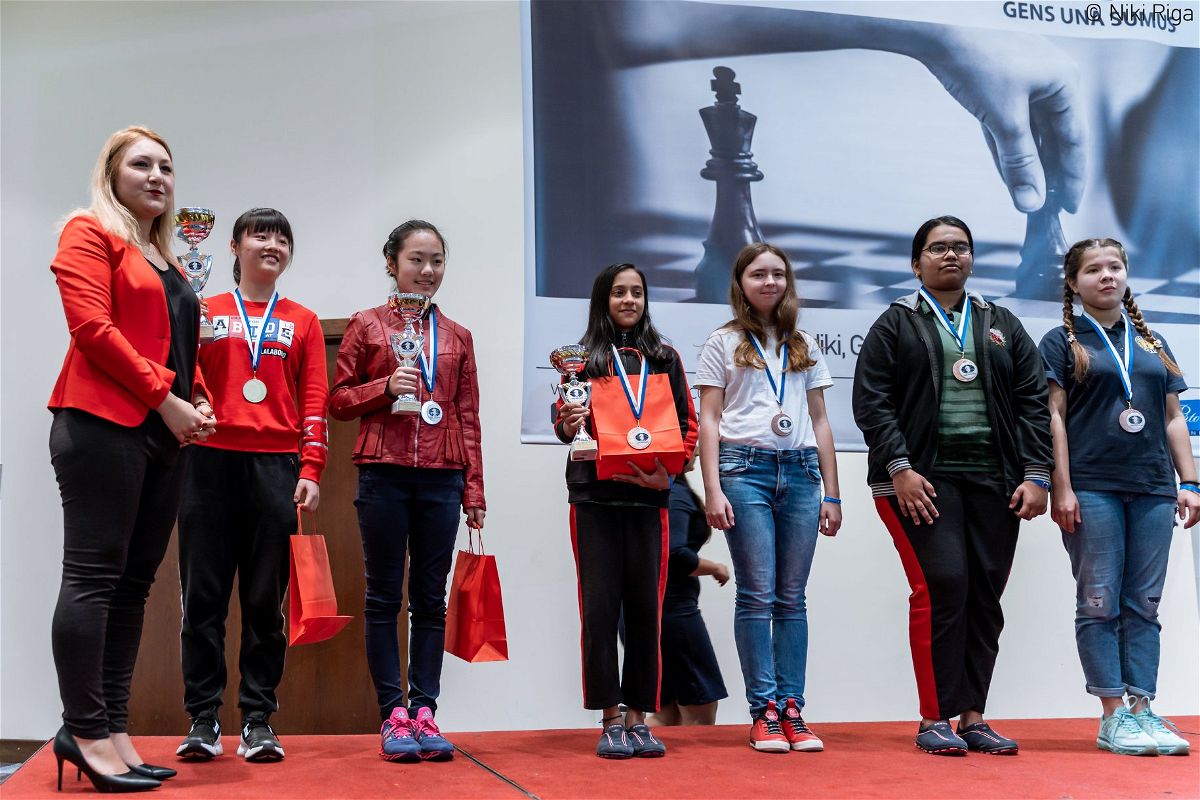 Under-14 girls - Divya won the bronze and Jyothsna was fifth | Photo: Niki Riga 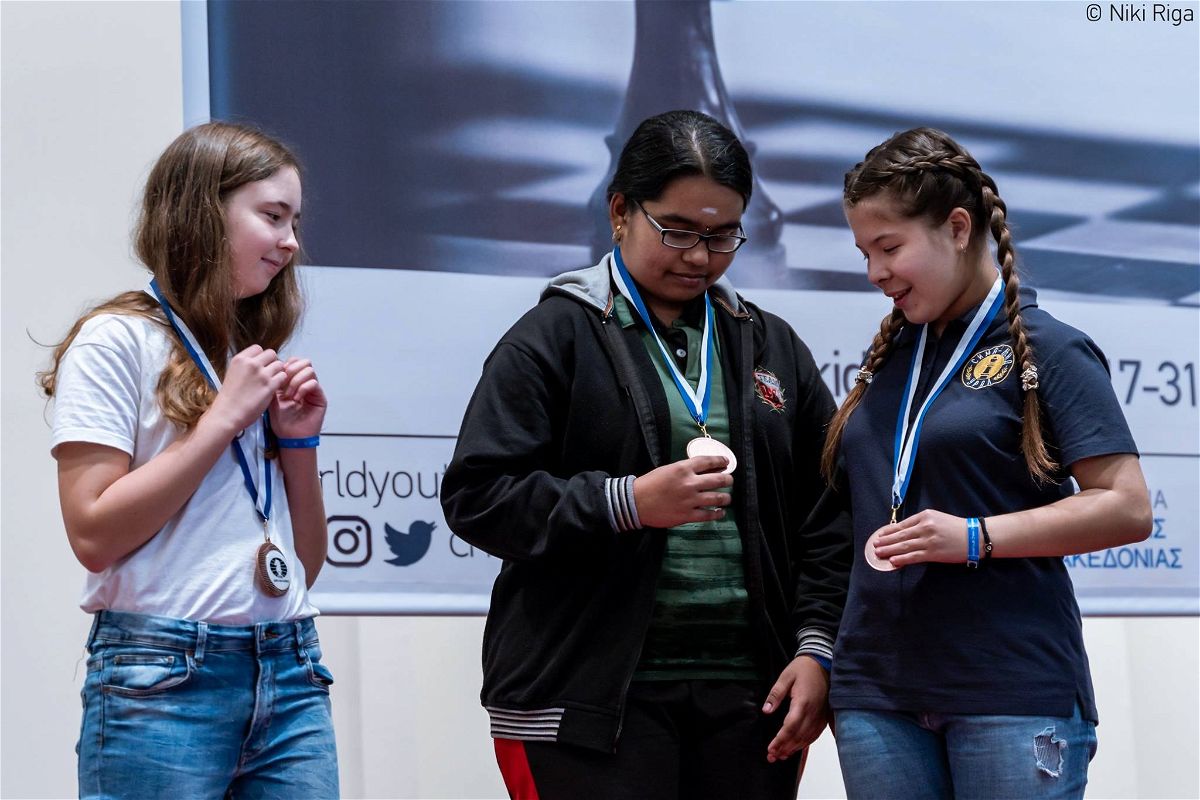 Hey! your medal looks brighter than mine! | Photo: Niki Riga 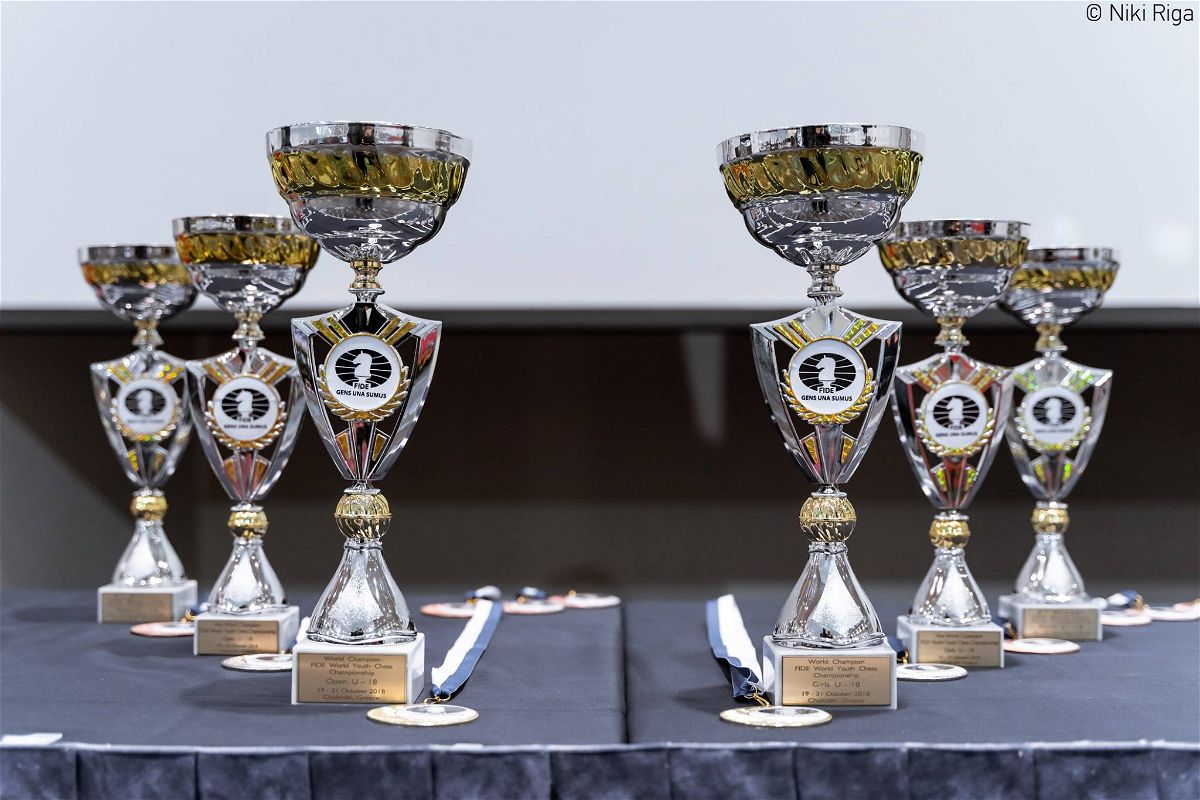 Trophies that were given to the top three in each section | Photo: Niki Riga 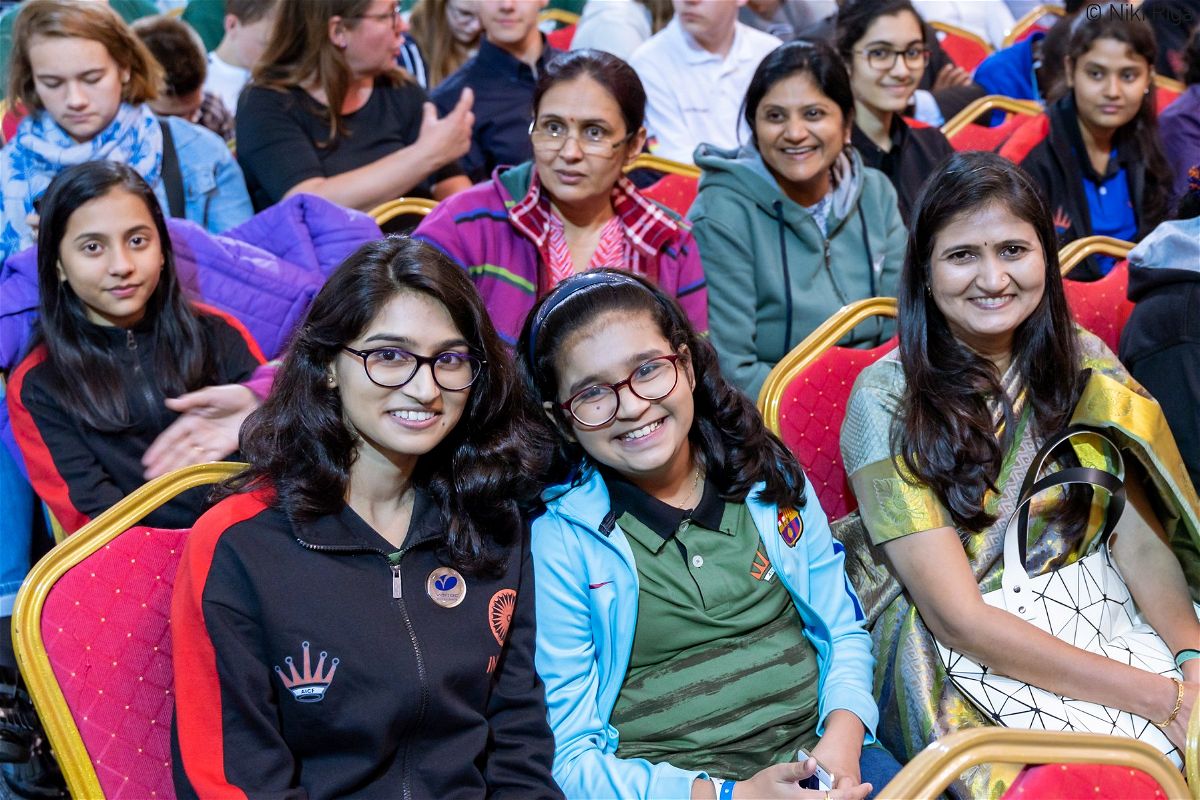 The Indian corner and the adorable Sagar family in the front row - Tejaswini, Siya and Anjali | Photo: Niki Riga 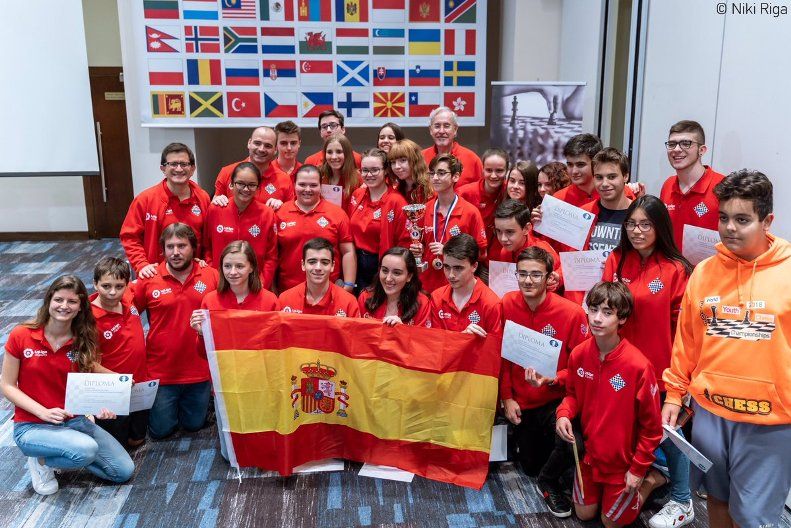 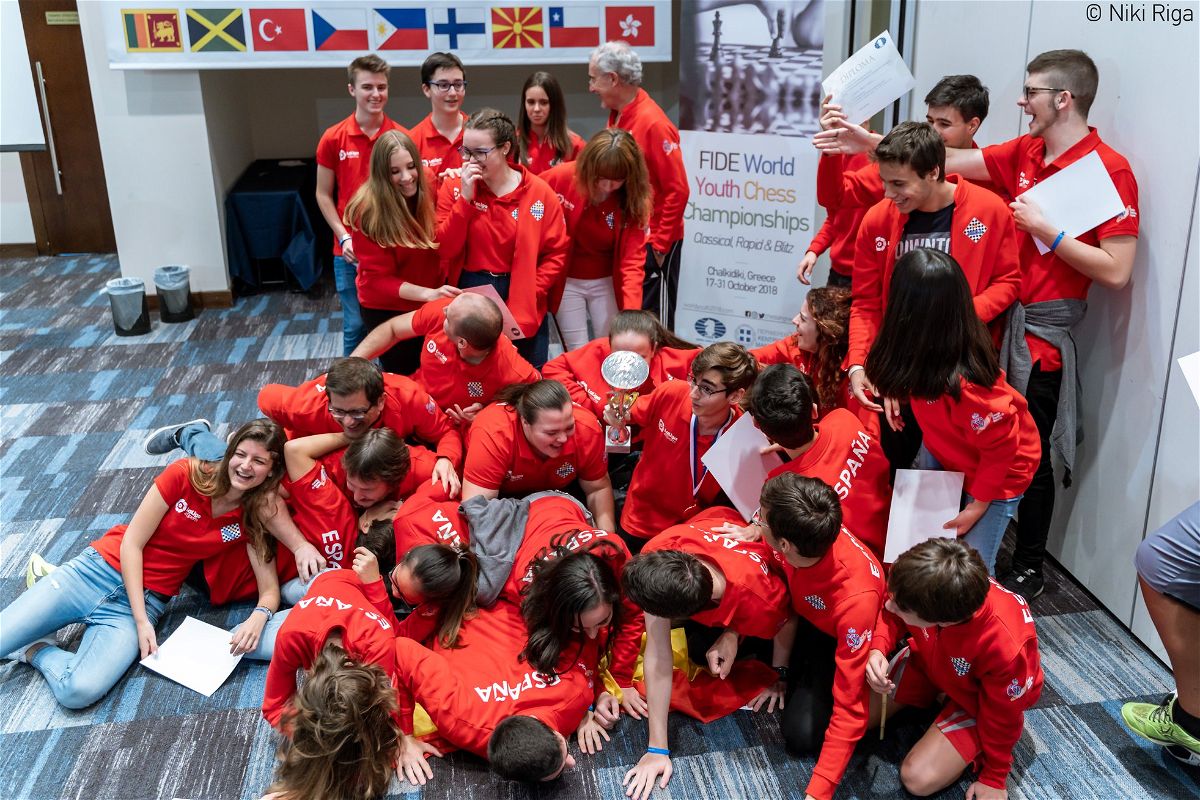 Rithvik Raja finished ninth. He had a clear shot at the medal if he hadn't lost the last round to the eventual silver medalist.

The last round in the under-14 section saw a controversy. On the top board the eventual gold medalist Gines Esteo (Spain) was playing with the black pieces against Alexander Krastev. 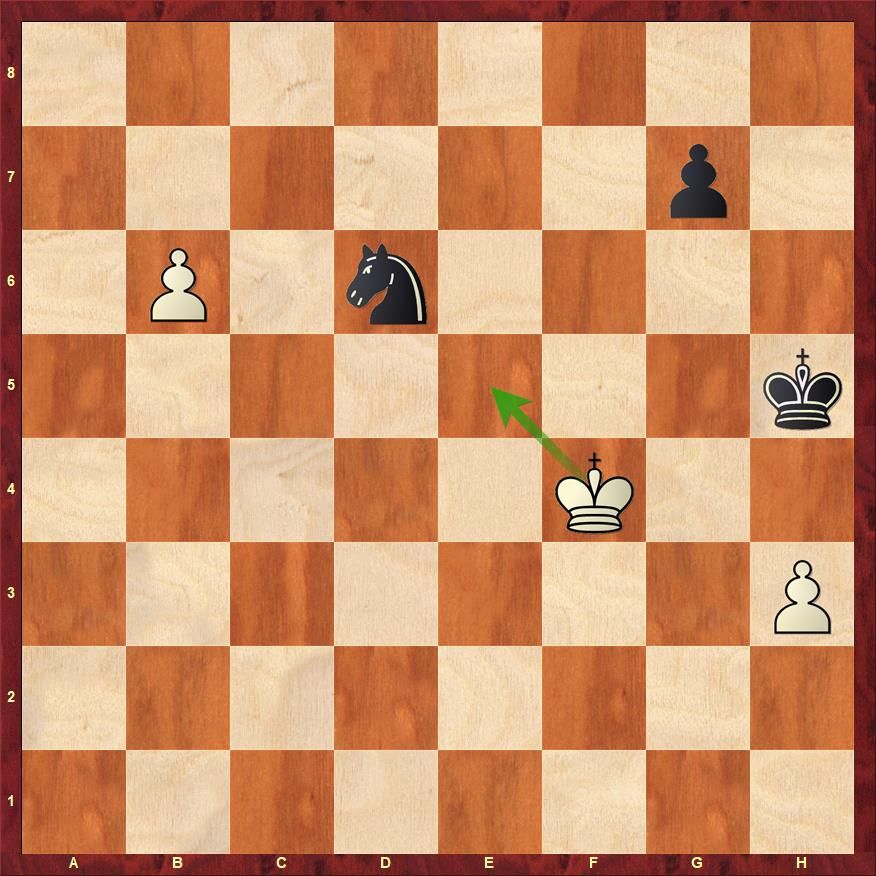 This position is drawn, but White played the move Ke5 which allows...Nc4+ and Gines Esteo won the gold medal

After this happend Zurab Azmaiparashvili, the ECU President wrote on Facebook accusing the German player with the white pieces of cheating. He was enraged because his Georgian player Nikolozi Kacharava had to settle for the silver medal. Zurab wrote about the above position, "White to move and black is becoming world champion under 14! Is it cheating or not? I’m asking this question to FIDE and ACP. Unfortunately I cannot react because by this result Georgian player Nikolozi Kacharava didn’t become a world champion and I’m Georgian too..."

A day later Zurab understood that he had gone wrong and apologized on Facebook:

Three girls did well in this section - Divya, Jyothsna and Mrudul.

The best performing Indian was Sankalp Gupta, who made his final IM norm at the event, but a lose in the penultimate round ruined his medal chances. He finished 13th. The interesting to note is that top seed of the event and one of the most talented youngsters in the world right now Andrey Esipenko with a rating of 2609, couldn't finish in top 10! He had to settle for the 11th spot. That's how tough it is out there.

Sanskriti Goyal's bronze and Aashna Makhija's sixth place was a good performance by Indians in the girls under-16.

The best performing Indian in this section was Mitrabha Guha who finished 30th. India's performance in the under-18 section was not great.

Tejaswini Sagar was doing well throughout the event and was unlucky that she missed out on the medal. A loss in the penultimate round to Alexandra Obolentseva derailed her chances. Arpita Mukherjee finished sixth and Tarini Goyal also wasn't too far behind on the seventh spot. A fine performance by the Indian girls.

As we publish the report on World Youth 2018, the World Cadets (under-8,10,12) have begun in Santiago, Spain. While Indians usually dominate in the cadets championships, I think this year it is not going to be easy. There are a lot of strong players and the clear favourite for India to win a gold is Gukesh in under-12 open, but it will also be a tough fight. It will be interesting to follow how our cadets do. As for the World Youth Championships, this experience will prove invaluable to the youngsters who are taking the leap to the next level in their chess career. At the same time, two bronze medals is not something that India would be happy with. If you look closely the two medals and four other players who finished in top six, were all girls! I am sure the boys would be inspired to do better. We are capable of more and I am sure we will come back stronger in 2019.