Delhi 2018 Round 10: Arkadij Naiditsch romps to the finish line!

When the 2700+ rated Azeri GM confirmed his participation for the Delhi International 2018, questions arose whether he would be able to win the tournament or not. With the under-rated Indian players, it was not going to be easy. However, Naiditsch showed to the world that he was a class apart as he easily won the tournament with 8.5/10. He paced himself in exemplary style and was never in danger of being pushed behind. Ziaur Rahman finished second and Nubairshah Shaikh was third. The C-category was won by Anirudh Jain. We bring you the final round report along with some pictures of the prize giving ceremony.

If the Delhi International 2018 was a 10-kilometre run, then Arkadij Naiditsch zoomed past everyone is the first 8 kilometres and then walked his way to the finish line in the last two. The Azeri GM seemed simply in control of everything during the tournament and scored a clinical 8.5/10 (with draws against Ratnakaran, Akash PC Iyer and Alberto David). 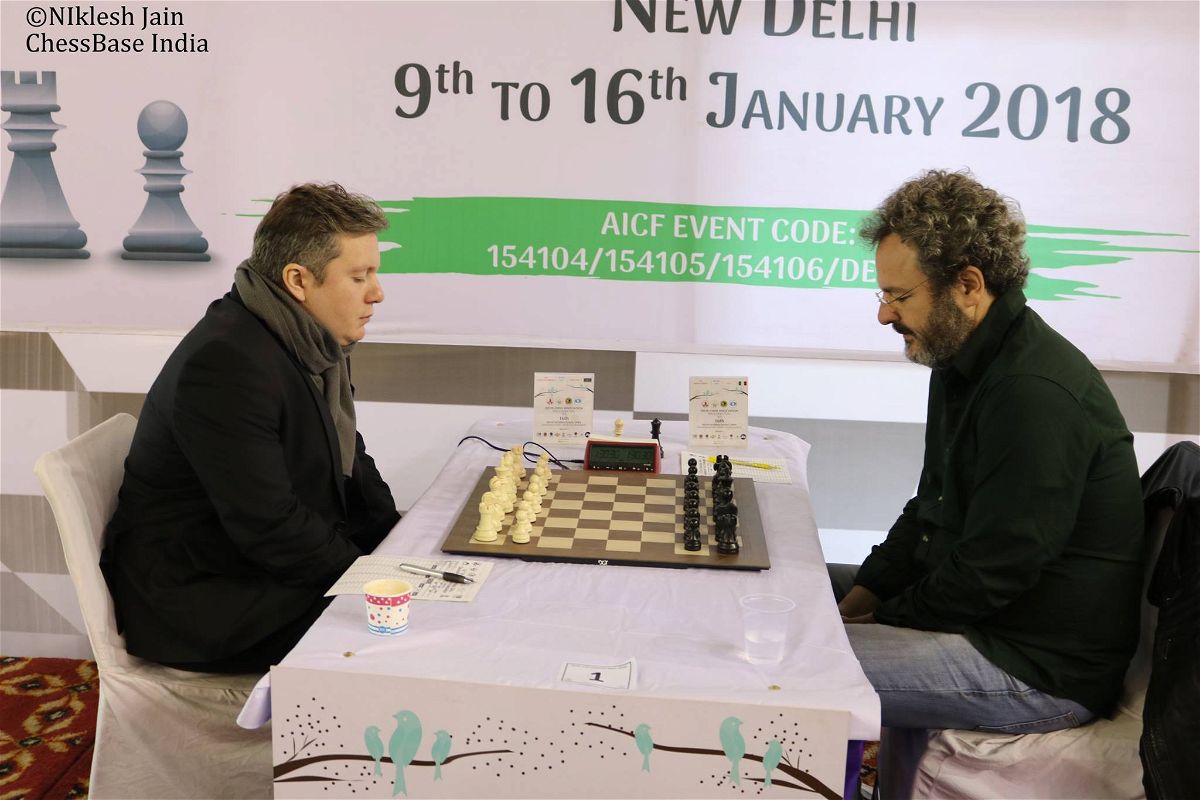 The final round clash between Naiditsch and Alberto David ended in a quick draw. Naiditsch was happy with a draw, because even if Ziaur won, the Azeri GM would win the event due to direct encounter being the first tiebreak. 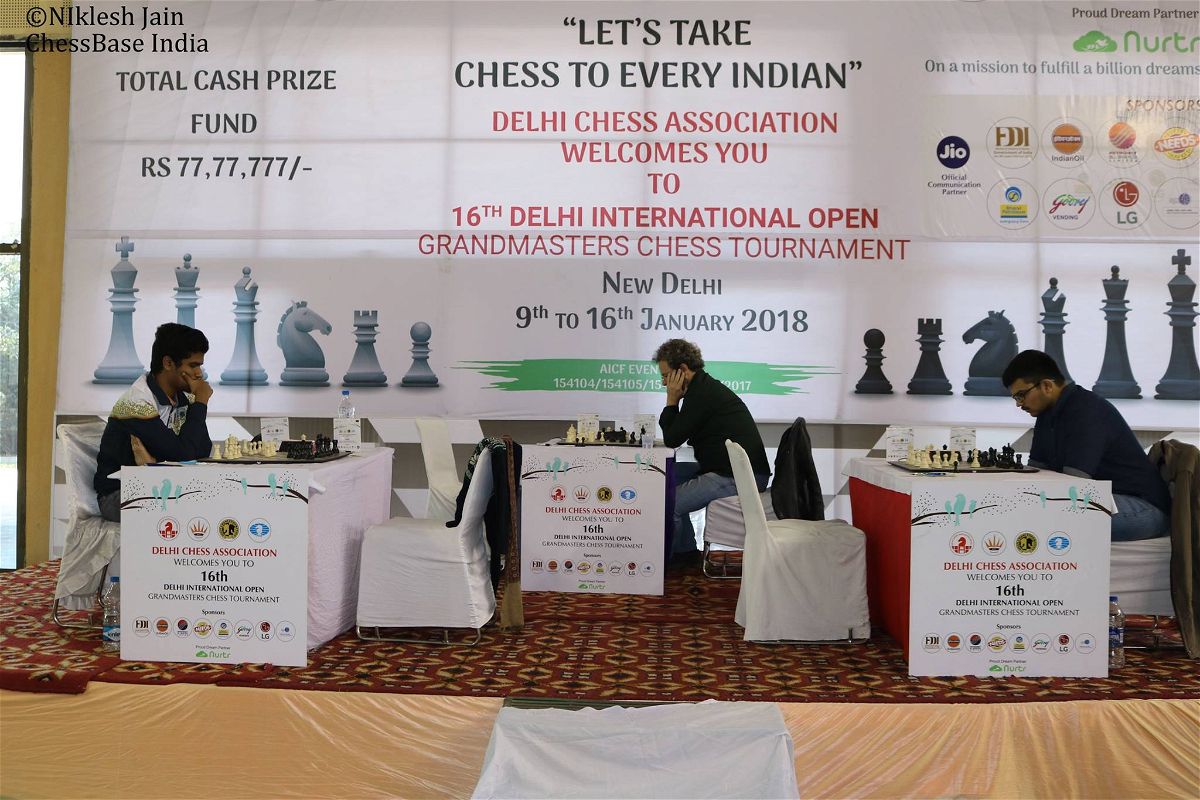 And you thought chess was a game played between two players! 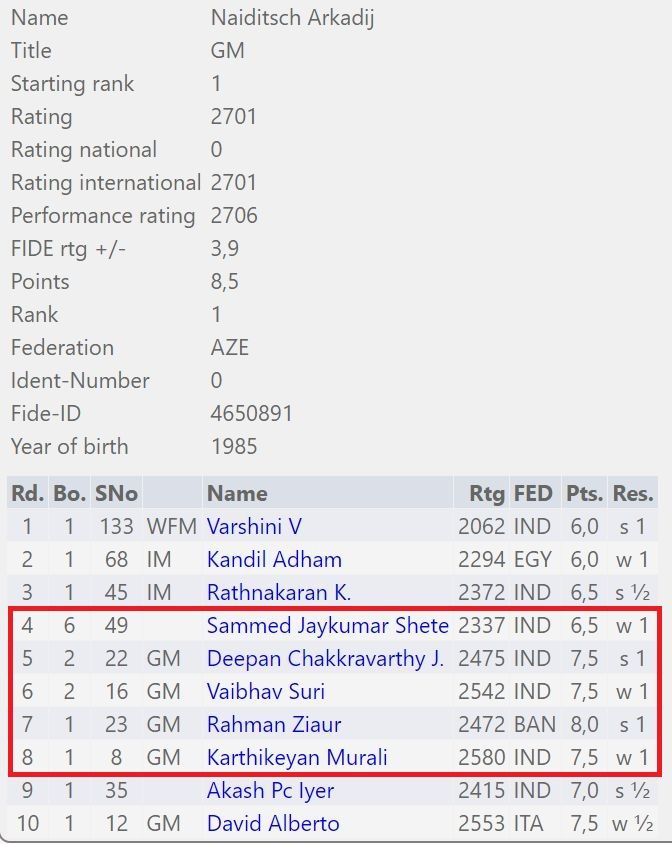 The five wins from rounds four to eight ensured Naiditsch's victory at the event
Immediately after his game we caught up with Naiditsch and asked him about his experience of playing in India, his two victories over Magnus Carlsen and what he feels about Vishy Anand becoming the World Rapid Champion at 48. 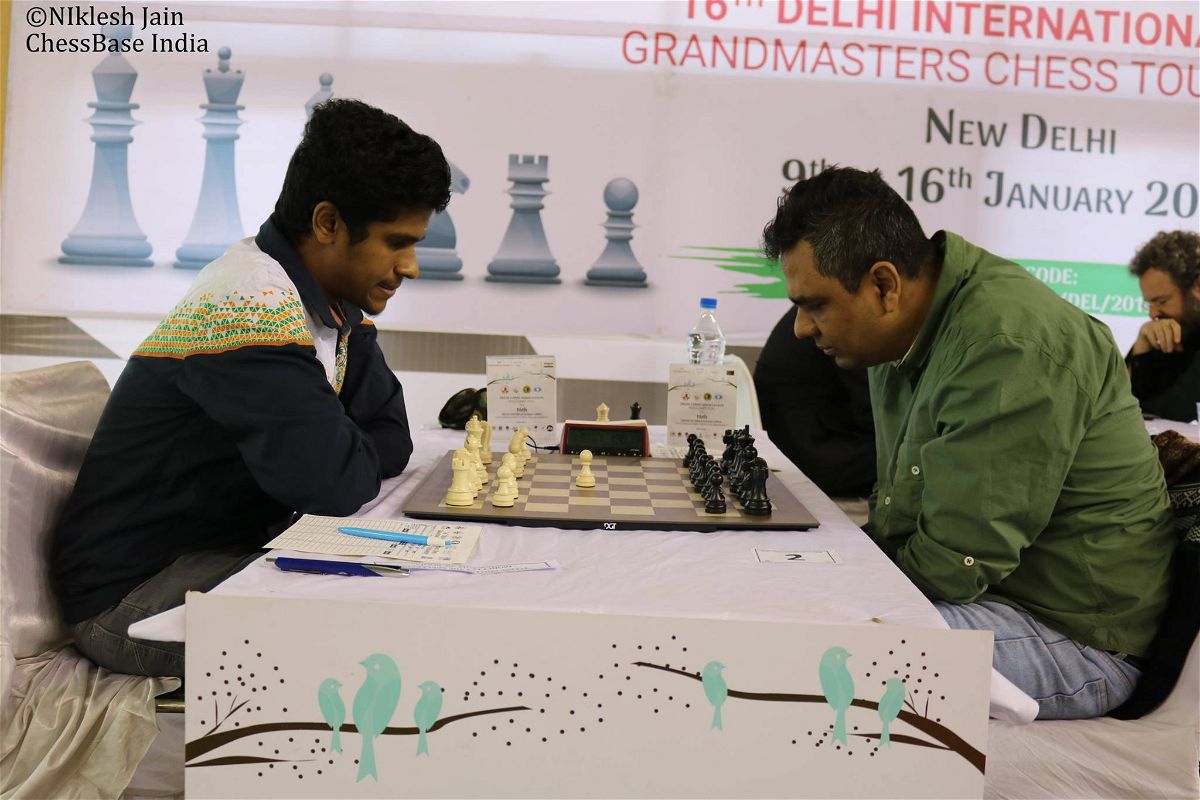 Karthikeyan Murali and Ziaur Rahman fought very hard, but the game ended in a draw

For Ziaur Rahman this was one of the most important performances of his chess career. Not only did he finish second and took home Rs. 4,00,000, but he also gained 31 Elo points. This means that he is back into the 2500 league! A place where he deserves to be. 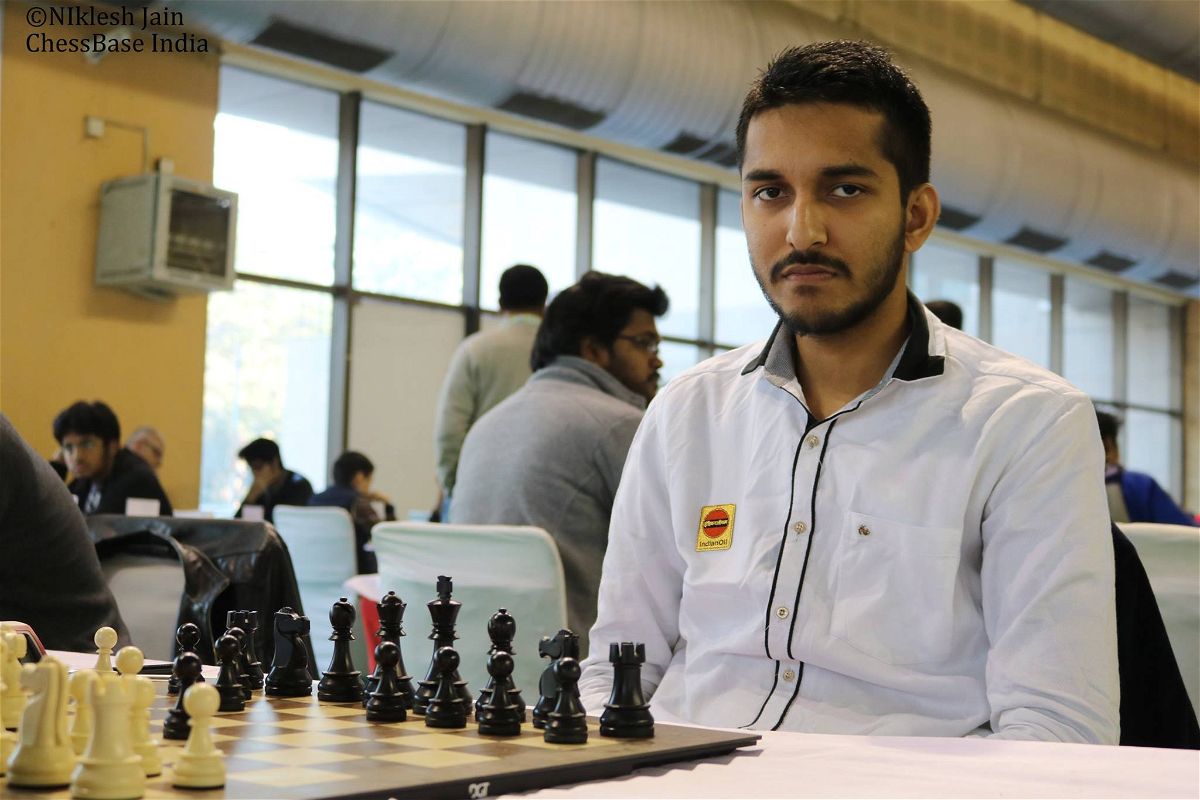 The find of the tournament was Nubairshah Shaikh who scored 8.0/10, earned his maiden GM norm and also finished third

Nubair's tournament was already very successful after he had achieved his GM norm in nine rounds. Hence, he offered his opponent Vignesh a draw after just three moves. But Vignesh was in a fighting mood and went for a full-blooded fight. Nubair played a model game in the Caro Kann and won the game in style. First have a look at the game on our replayable board and then listen to the lad analyze the game.

Nubairshah Shaikh analyzes his tenth round win against Vignesh 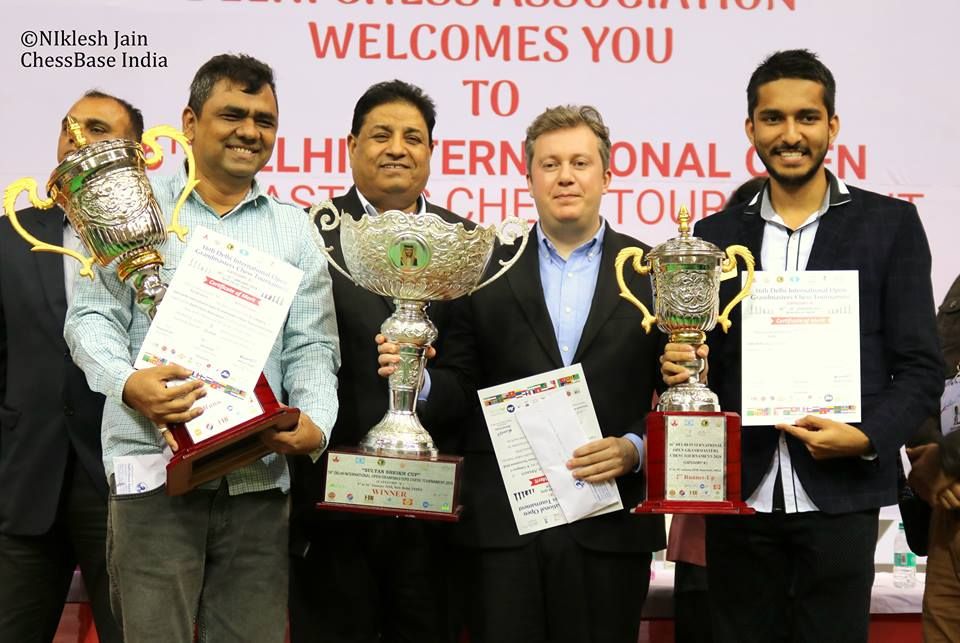 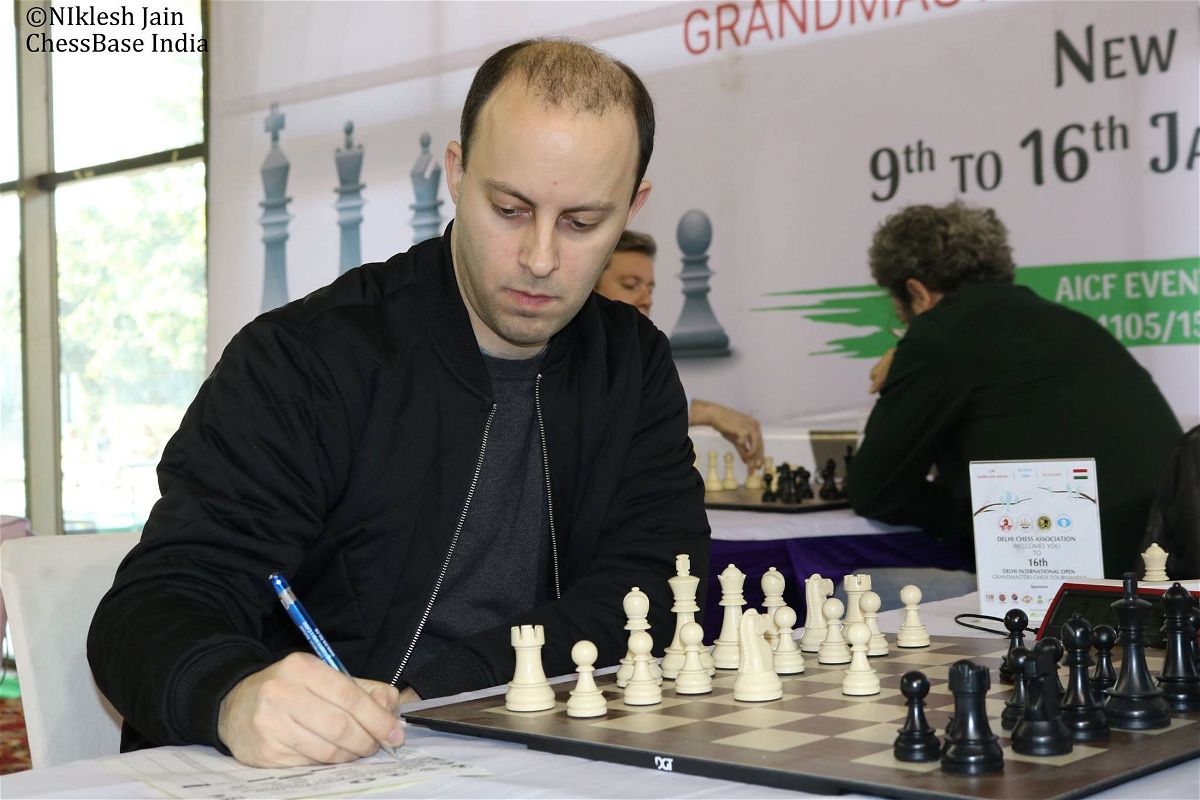 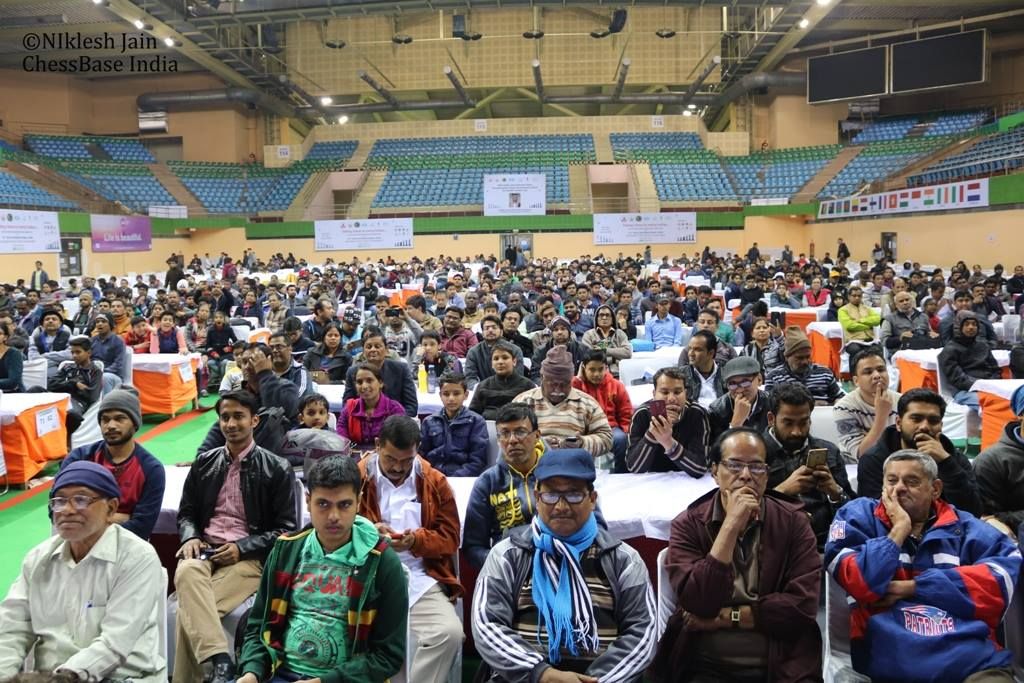 The closing ceremony was attended in huge numbers by the participants! 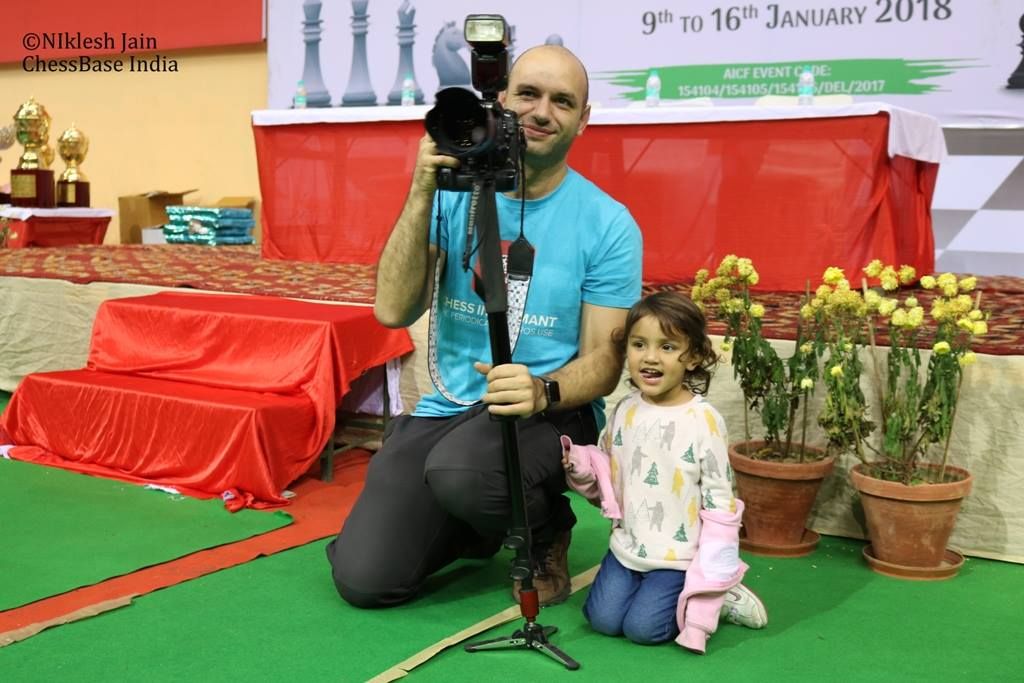 David Llada had his work cut out, but he had a few assistants! 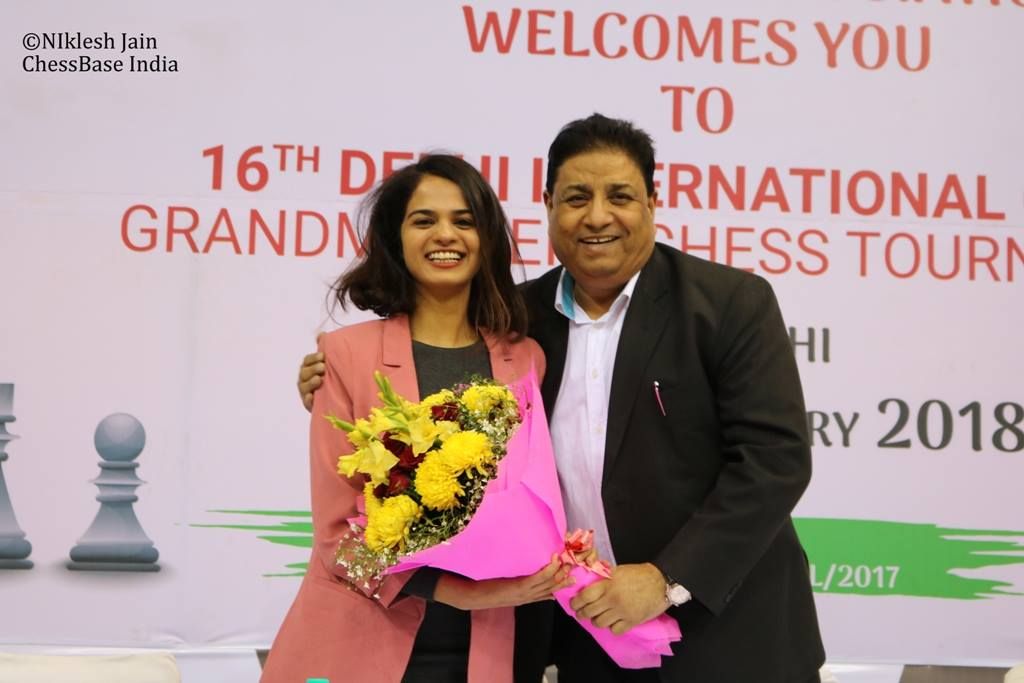 Tania Sachdev was the special guest at the event! 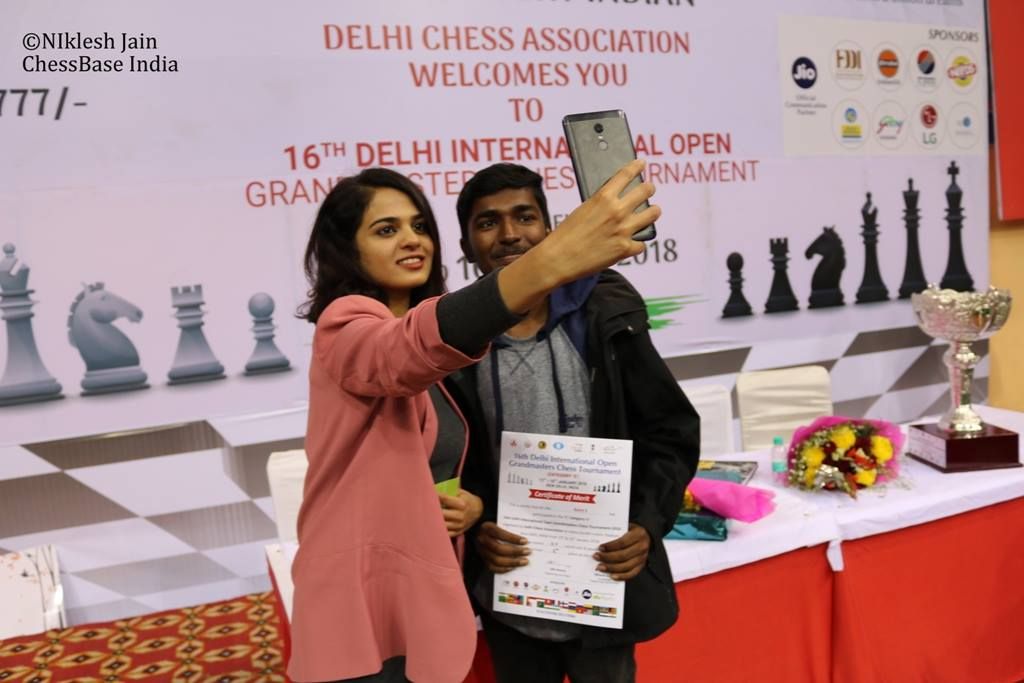 Selfie requests abounded in plenty!
ChessBase India caught up with Tania to speak about the Delhi International 2018, her role at the Gibraltar Chess Festival and how chess can make it to the Olympics 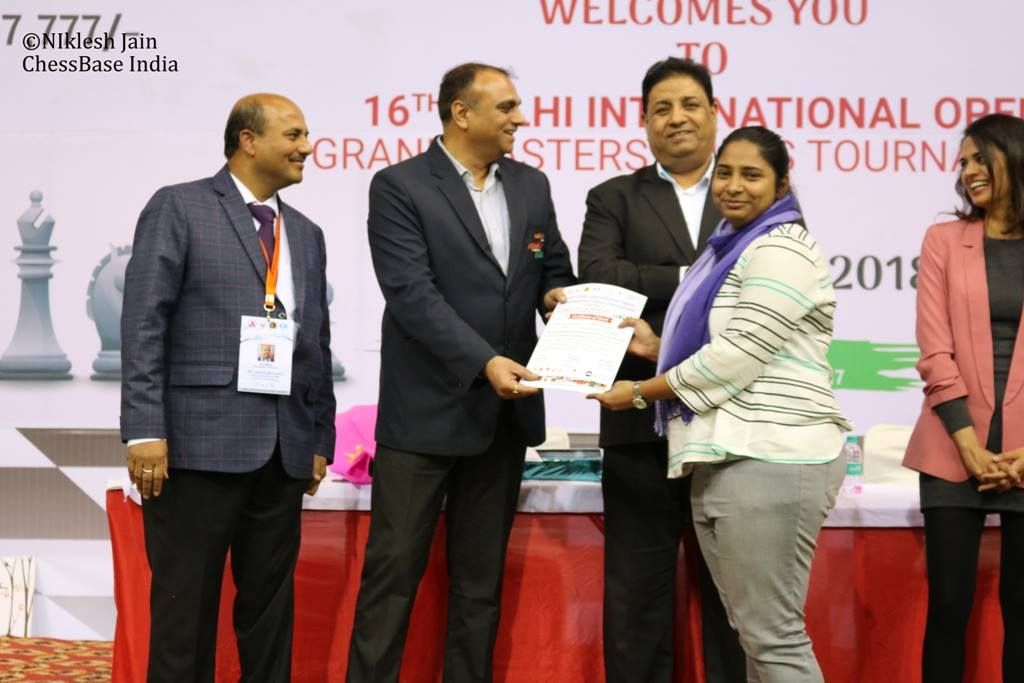 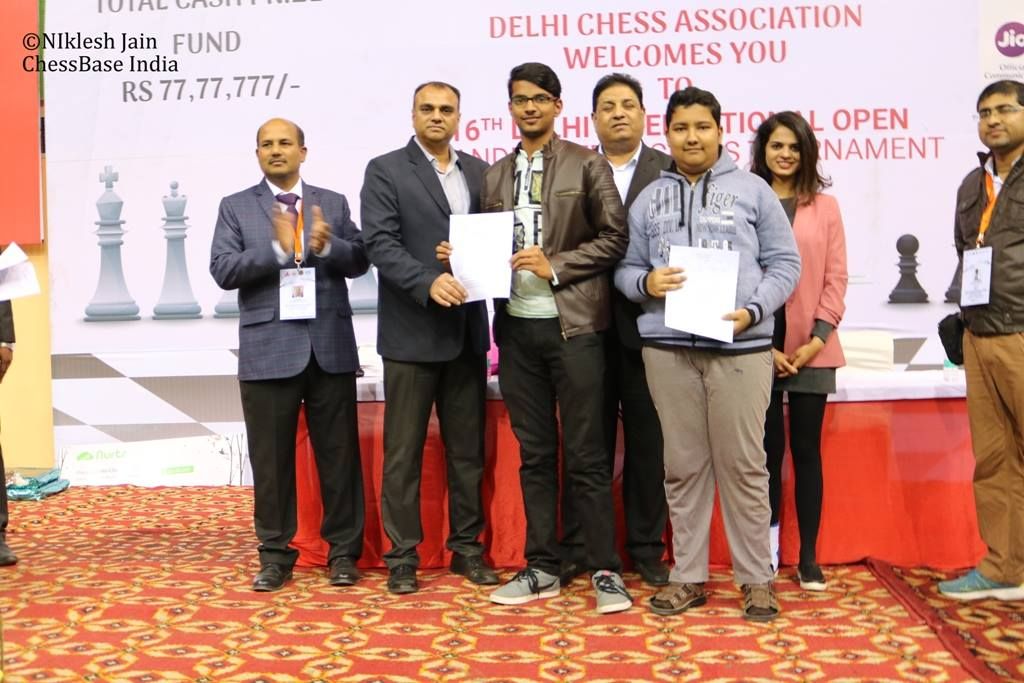 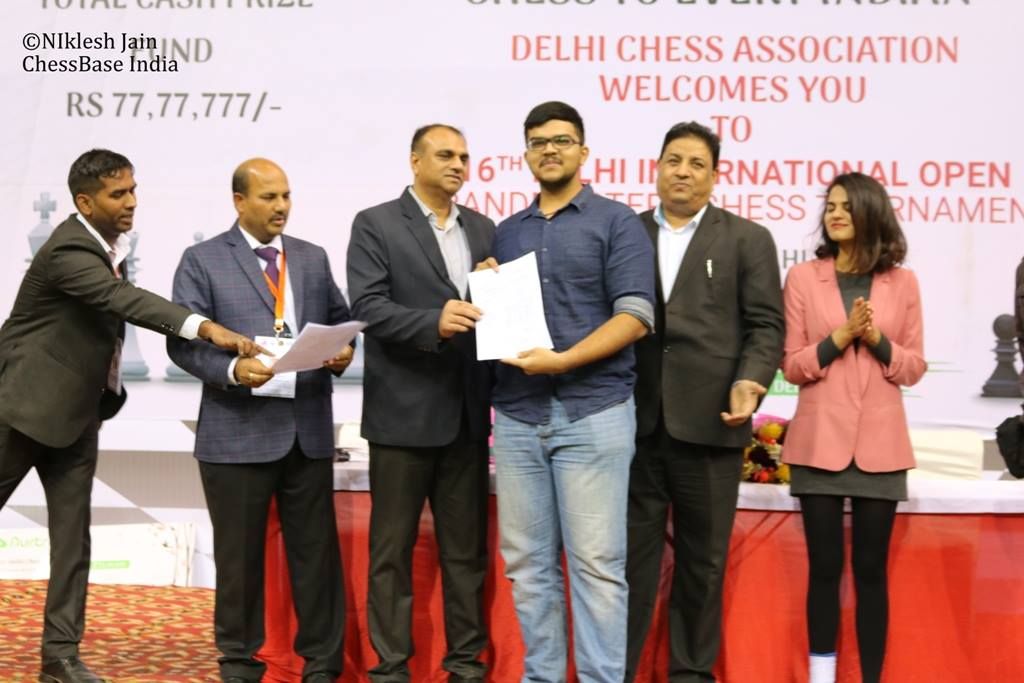 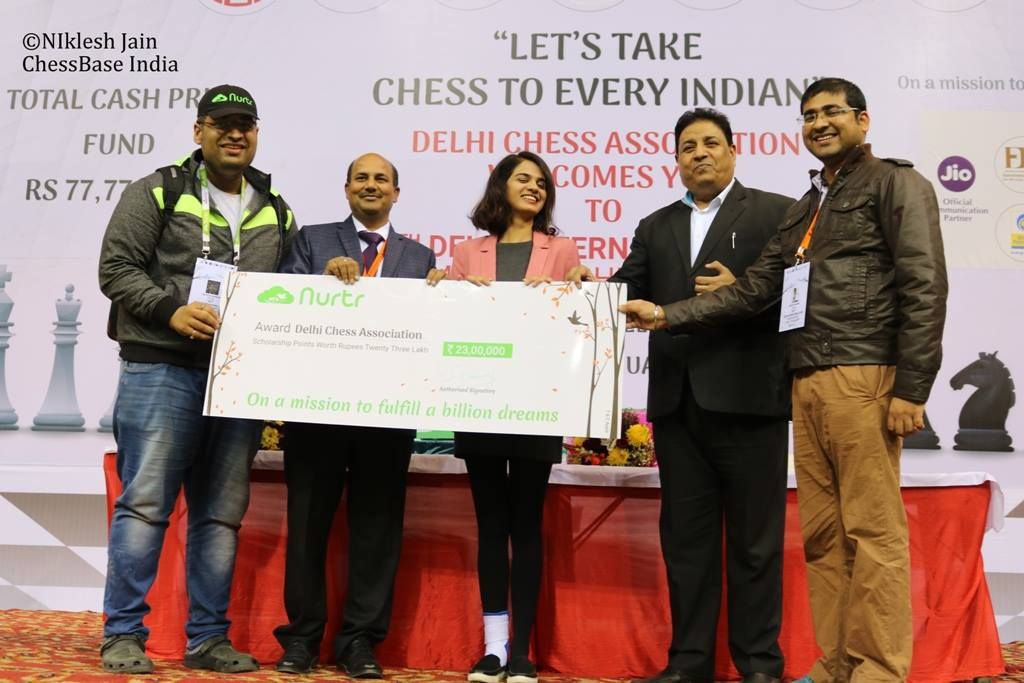 Nurtr supported the tournament in a big way by sponsoring Rs. 21 lakh 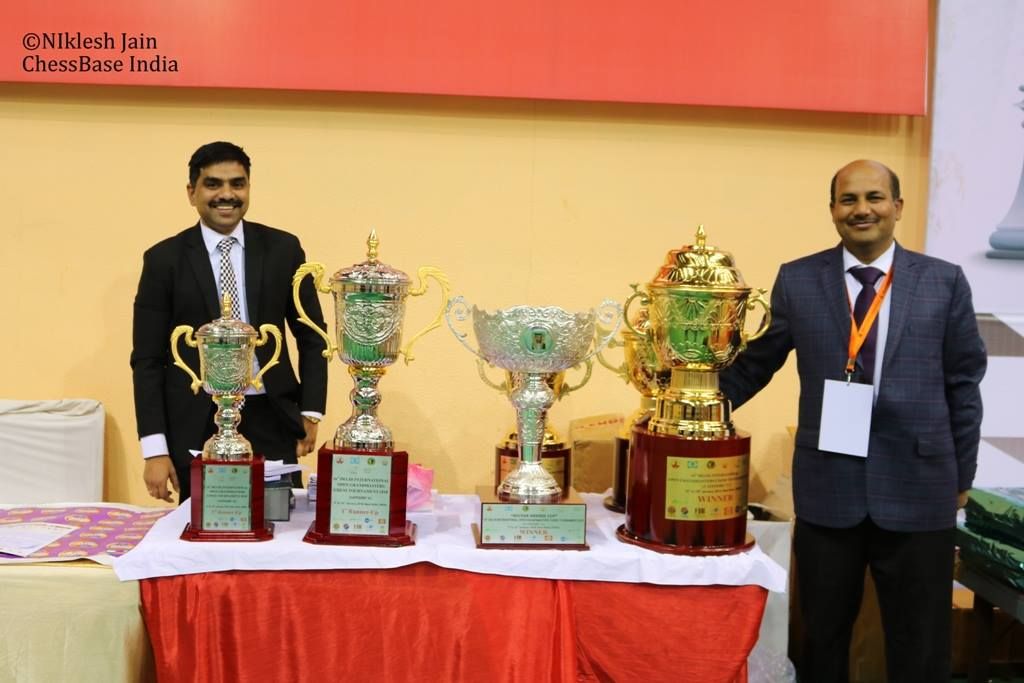 Two pillars of the tournament Gopakumar Sudhakaran and A.K. Verma with the majestic trophies

Category C witnessed huge number of entries - 1273 to be precise. If you do open the chess-results page you have to just keep scrolling! This shows that there are a lot of amateur players in India and having good prize money events can attract them to play. The total prize fund was Rs.25,00,000 and the first prize was Rs.2,50,000 followed by Rs.2,00,000 and 1,50,000. 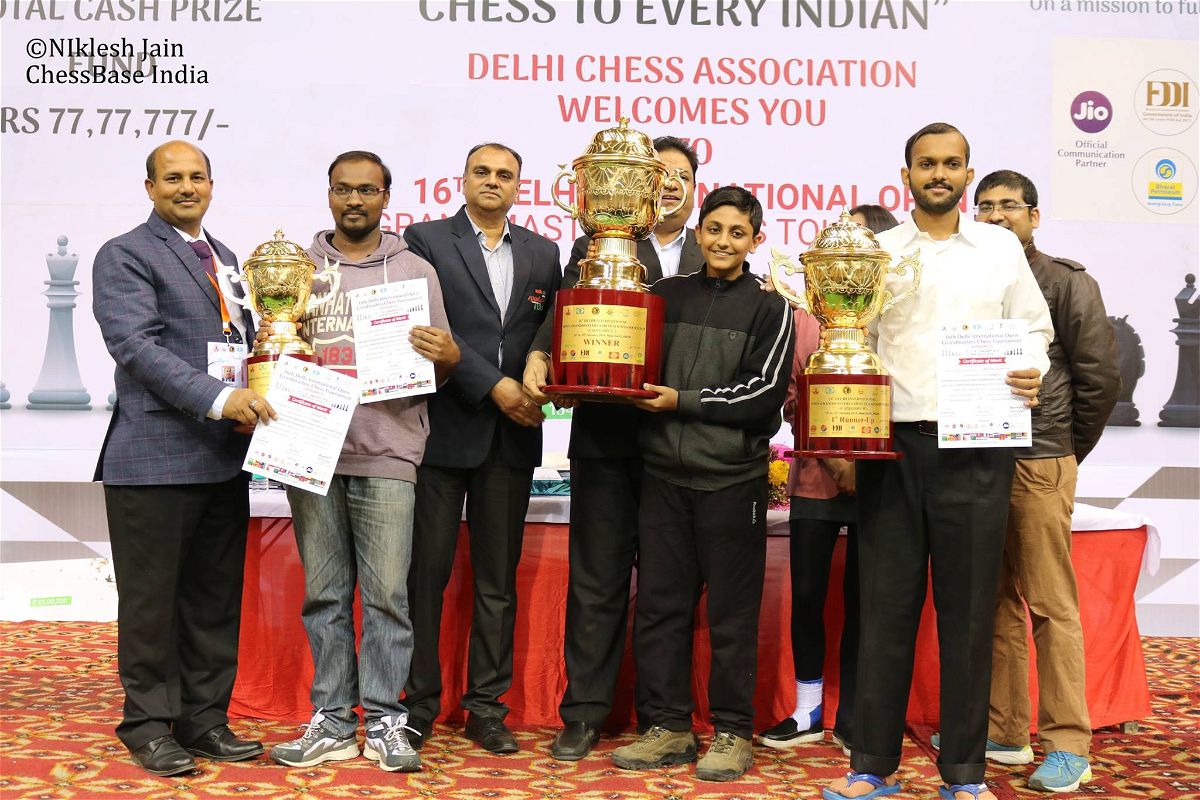 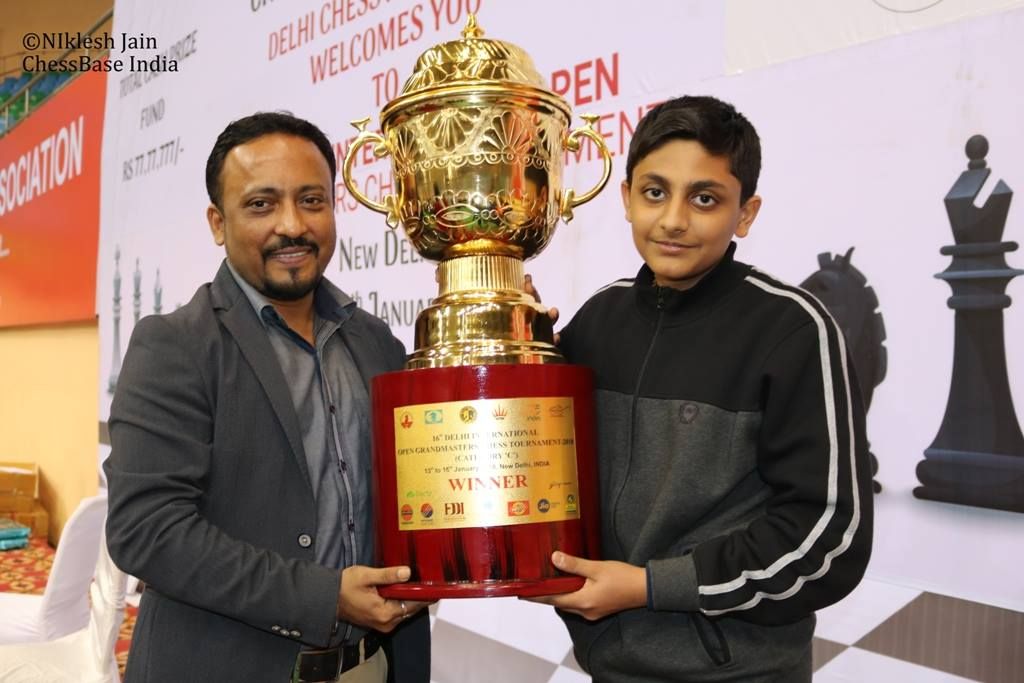 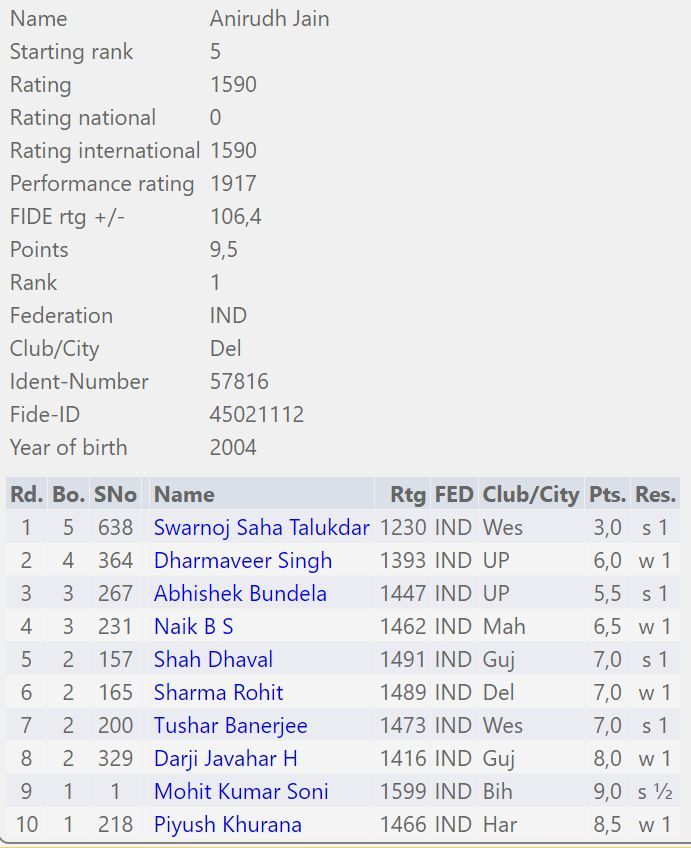