What a great gathering of chess players we have at the Leela Ambience Hotel in Delhi. The Commonwealth Chess Championships 2018 kicked off from the 26th of June 2018. A record number of players are taking part in this event. In the mornings you have the age category events, while in the afternoon, the open section begins. Most of the top seeds sailed through, with the exception of the strongest female player in the tournament - Tania Sachdev. In a completely winning position she blundered in a big way and gifted the full point to the opponent. We have a huge report with some excellent pictures by Amruta Mokal.

This year the Commonwealth Championships just like the last year is divided into 15 categories. We have 14 age categories and one open event. Earlier, the age category prizes used to be given based on the open tournament itself, but since the last year, the Commonwealth Association have wanted to pit the youngsters against players of their age category in order to determine the medals. This is the reason why you have under-8, 10, 12, 14, 16, 18, 20 in both open and girls section, which comes to 14 age category events.

Let's first have a look at the absolute Open event before moving to the age category section.

Although we have a very good turnout of Indian GMs, the tournament misses International Grandmasters.

Deep Sengupta is the top seed of the tournament. He had some difficulties in the first round against his opponent from Mauritius Hoolan Naipal. The game was around even, or slightly worse for Deep, but he fought back and won the first round | Photo: Amruta Mokal 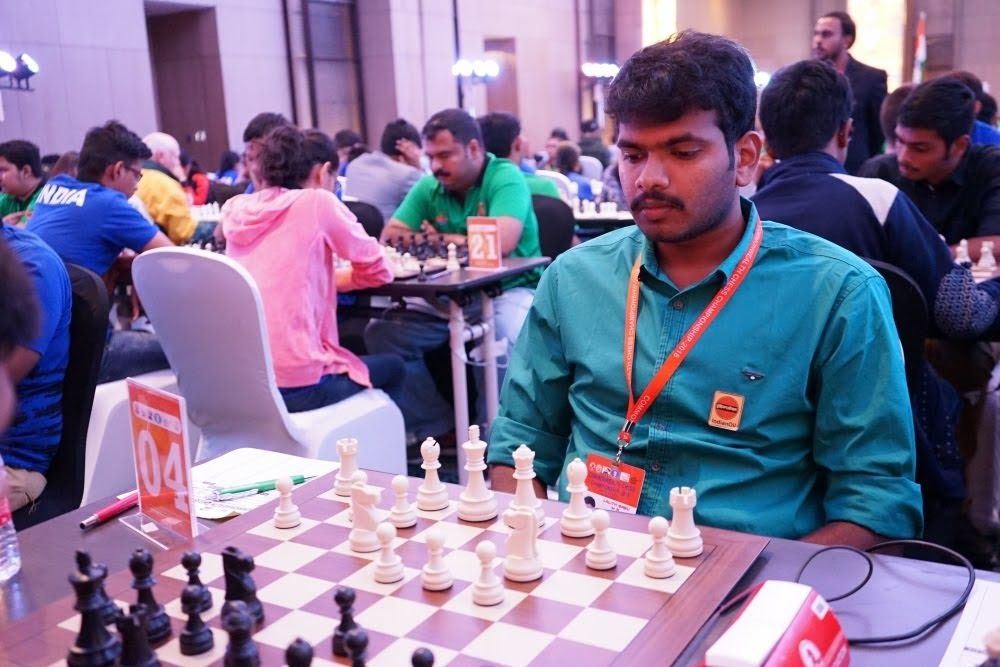 Lalith Babu played a very nice game from the white side of the King's Indian and won against Karan Trivedi | Photo: Amruta Mokal 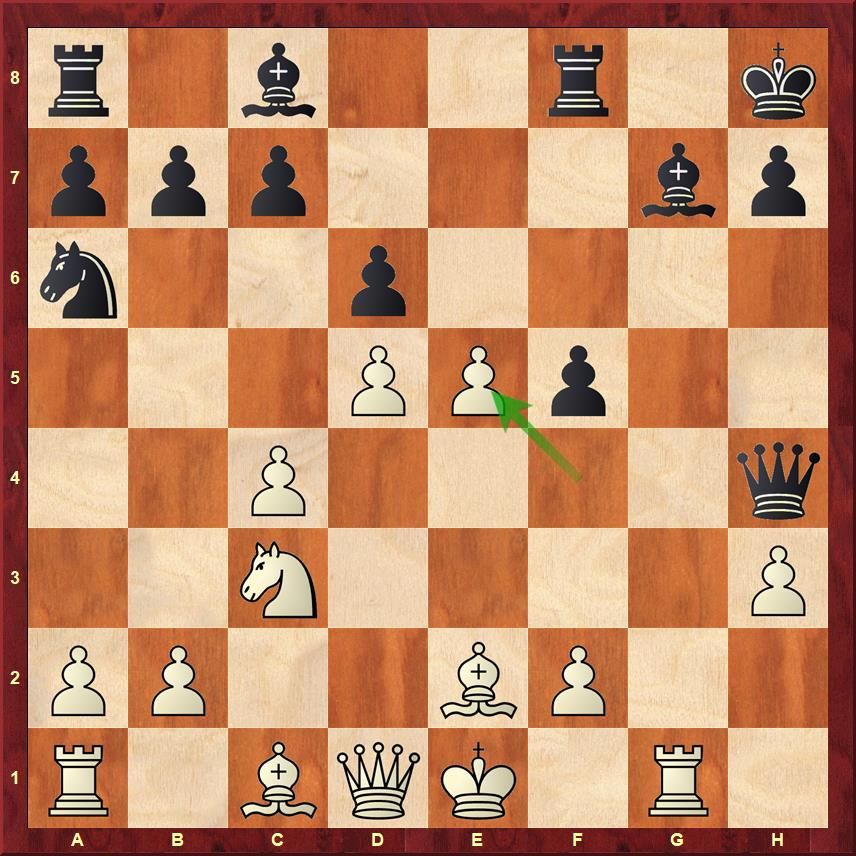 White has just taken the pawn on e5. How should Black recapture?

It's positions like these that Jacob Aagaard explains in the chapter "Comparison" of his book Grand Master Preparation - Calculation. What Jacob essentially mentions is that you go ahead with one line for example Bxe5 Bg5 Qxh3 Qd2 f4 and now in this position replace the bishop on e5 with pawn on e5, assuming that if you took dxe5 this position would have arose! You have to compare both the positions in this particular manner and when that is done, you have to choose which move is better. It is quite apparent that the bishop on e5 works much better than one on g7 hemmed in by his own pawn on e5. Karan's decision to take on e5 with the pawn was wrong and he lost the game. ...Bxe5! would have given Black a good position. 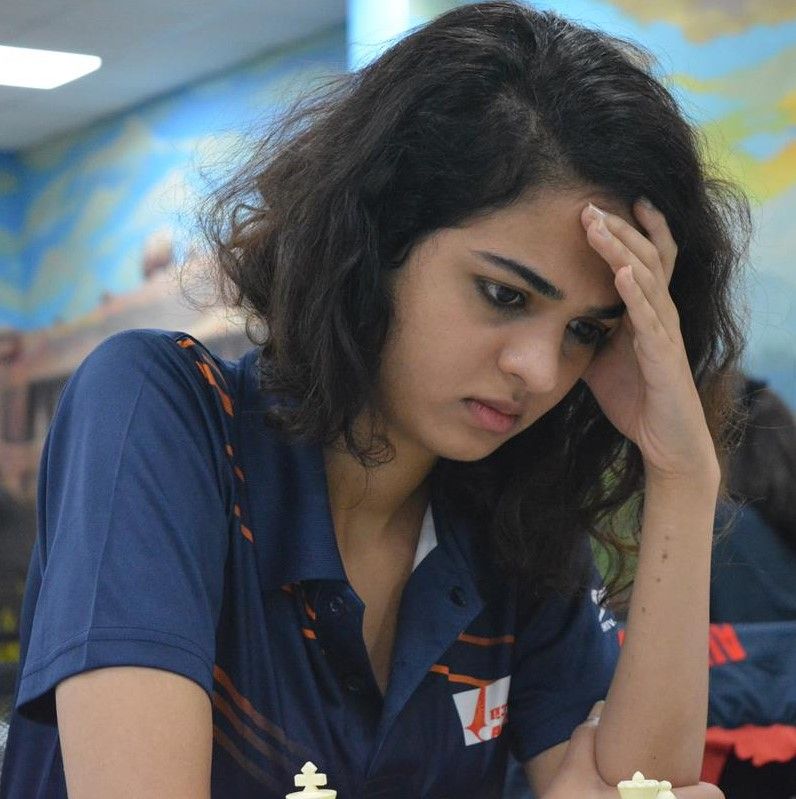 The biggest casualty of day one was IM Tania Sachdev who blundered in a completely winning position against V.S. Negi  | Photo: Amruta Mokal 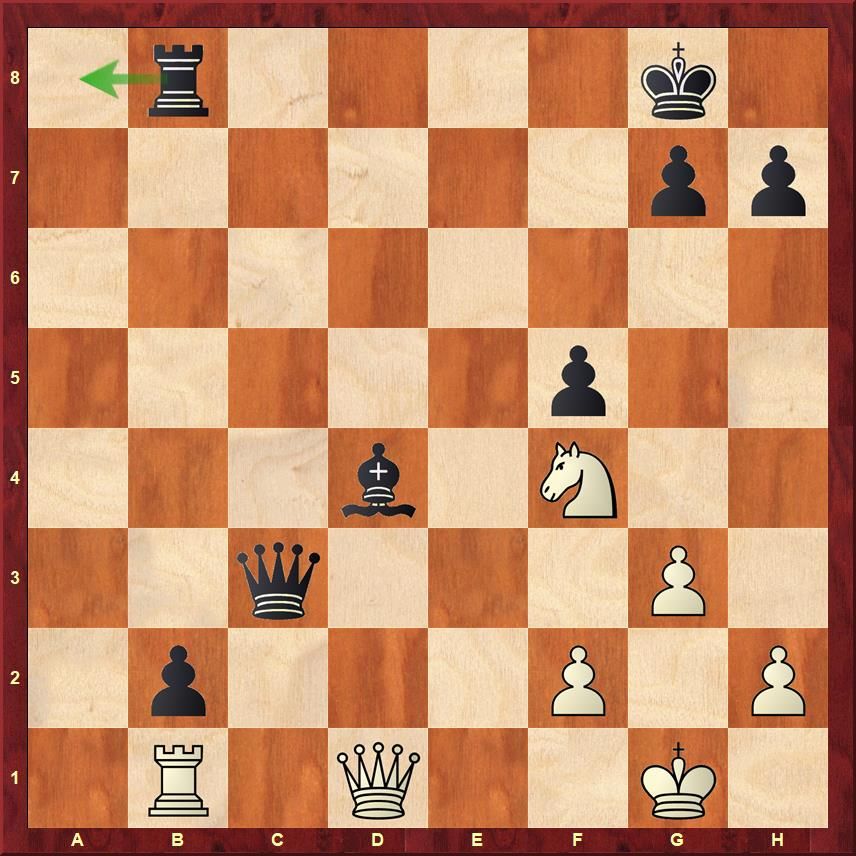 Tania, in this position played Rb8-a8. Can you see how White can come back into the game? | Photo: Amruta Mokal

Even after Negi played Ne2, the game would not have ended had Tania played Qc4, as Nxd4 is met with Rd8. But in the game, Tania played ...Qc5 and after Nxd4 Rd8 Qb3+, the game was all but over! 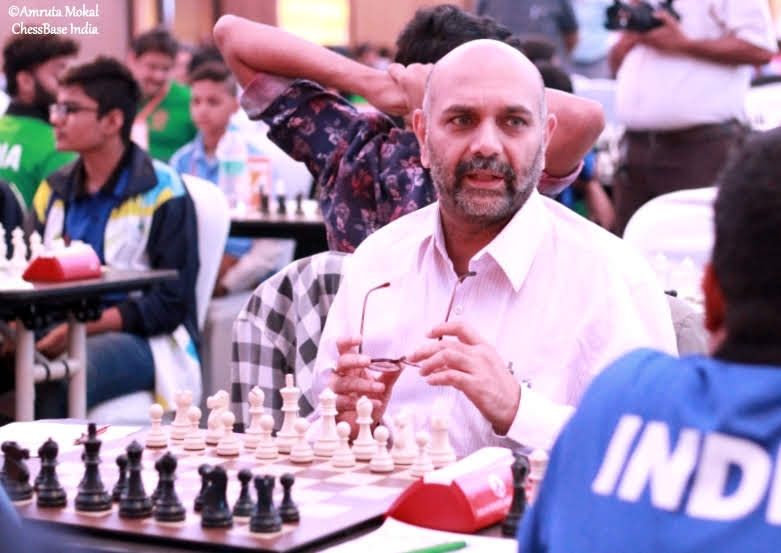 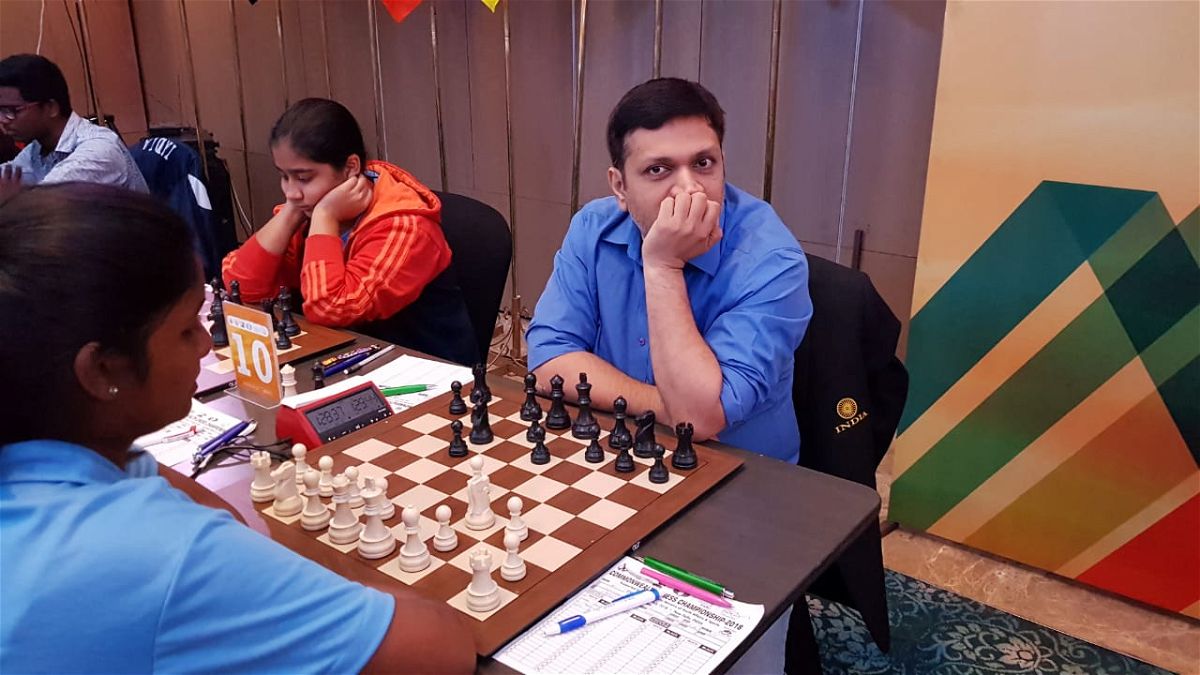 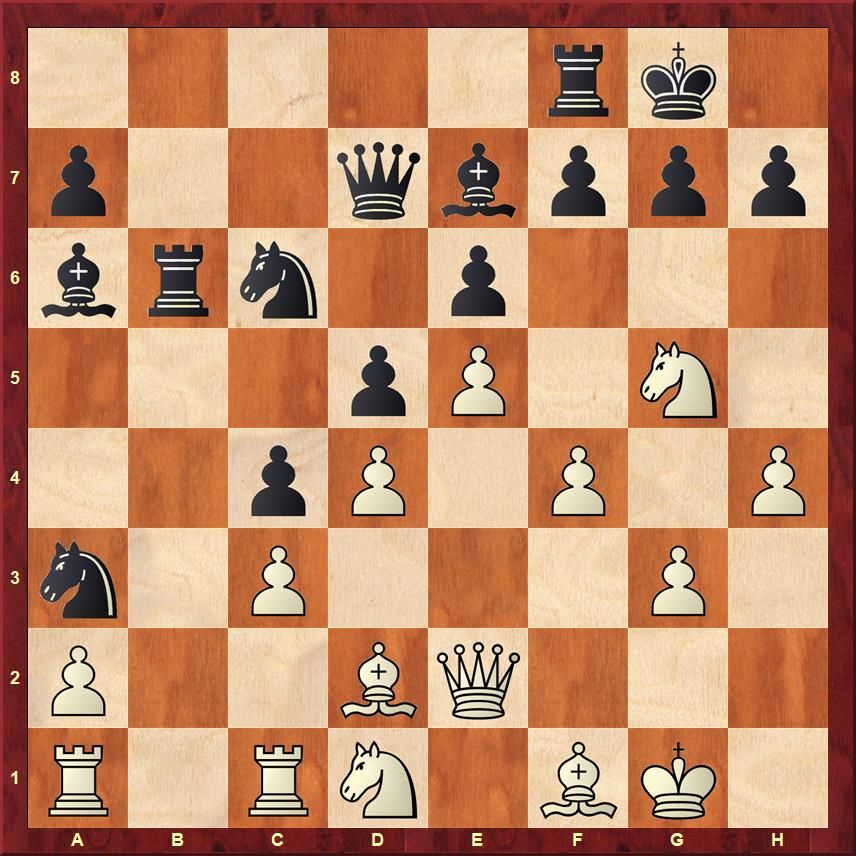 Black to play. What should he do?

There are 14 age category events going on simultaneously. Many of the youngsters are playing in both open and their age group category! Three sections under-8 open and girls and under-10 girls start at 3 p.m. The rest take place in the morning at 9.30. The turnout has been so huge that there is hardly any space in the hall. Jam packed! 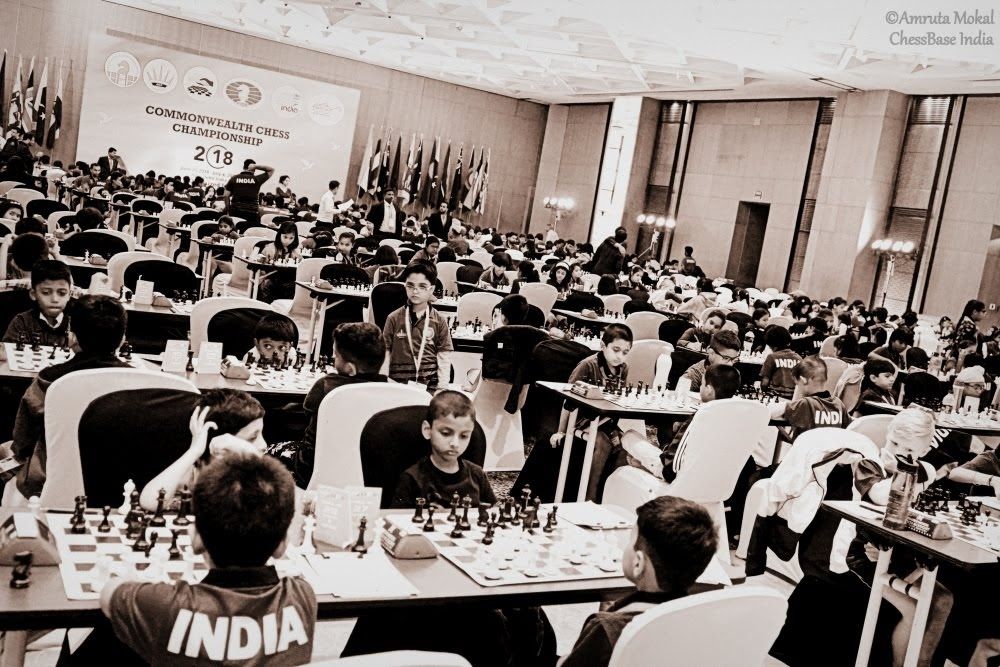 That's how it is! | Photo: Amruta Mokal

I always wonder what is it that gives the parents the patience and the energy to sit for hours and hours in the corridor while their children fight it out on the board! | Photo: Amruta Mokal

Many of the youngsters have been selected to the Commonwealth Championships because they finished at the top of their category in nationals. Hence, they get free lodging and boarding in Leela. So, many of the parents have booked a room in a nearby hotel and meet them before and after the round! A unique experience for the kids who get some independence and at the same time do not miss their parents! 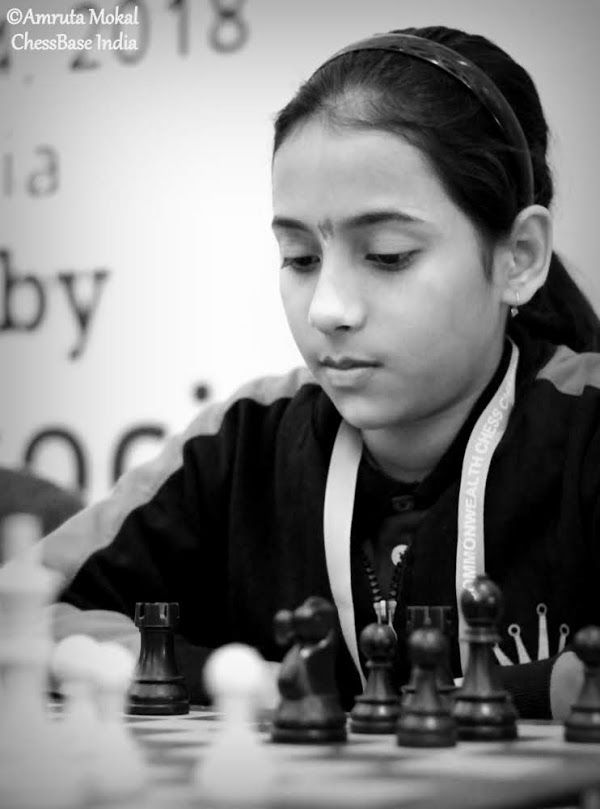 Divya Deshmukh is the top seed in under-16 girls. The 12-year-old decided to play in a higher age category to make it more challenging for herself! | Photo: Amruta Mokal 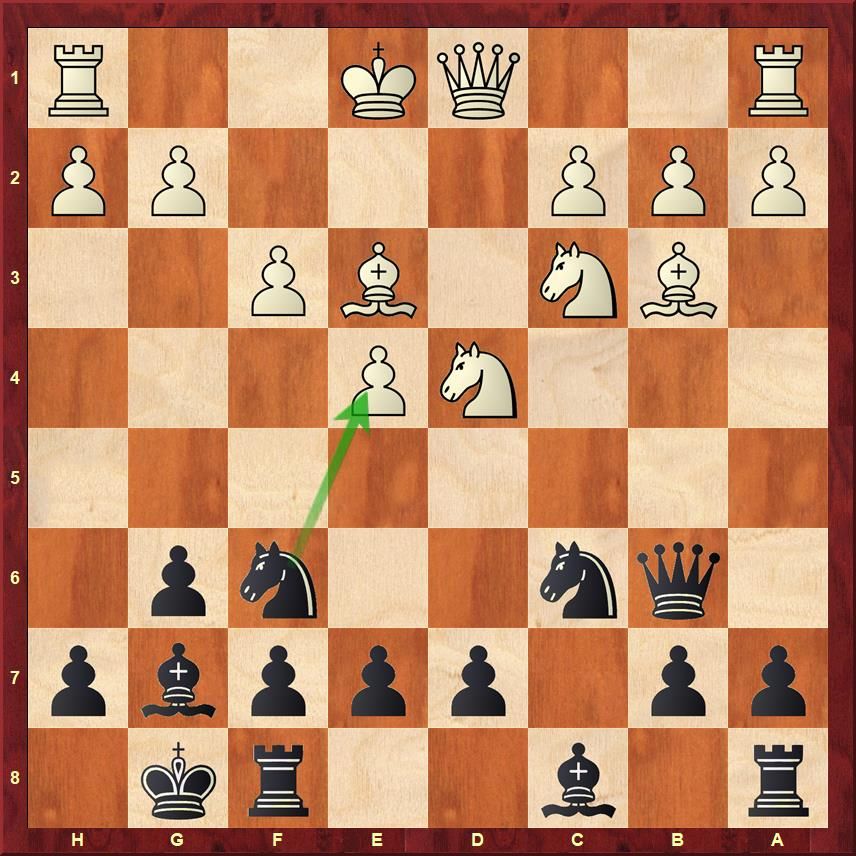 In this position Divya went for the move Nxe4. Is it a good move or bad one? 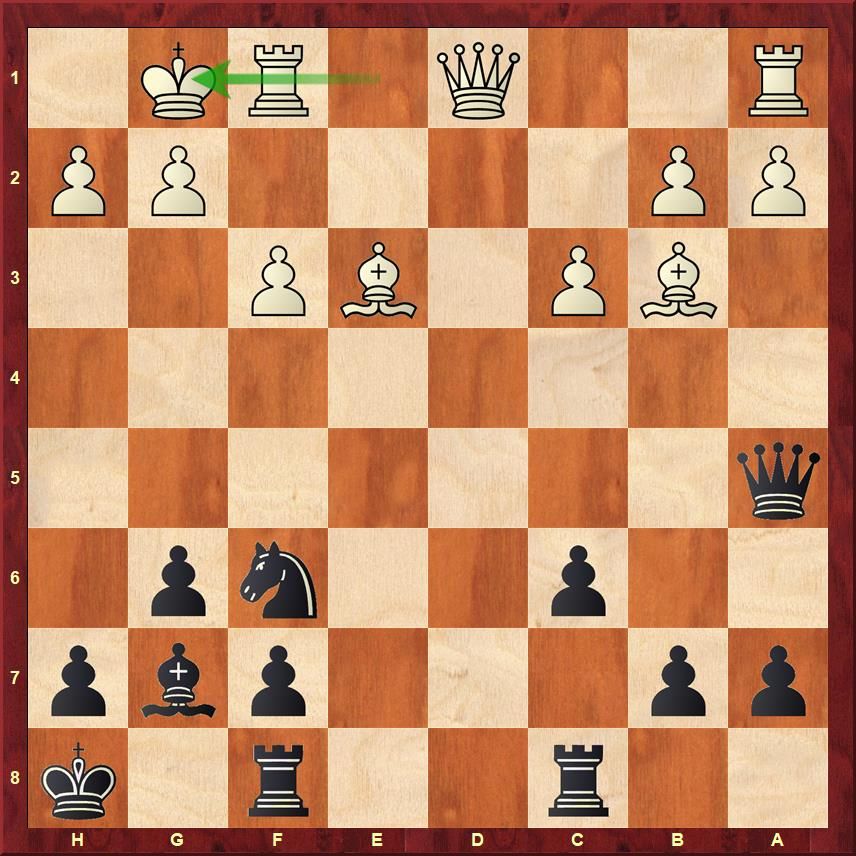 After a few exchanges we reached this position which is equal if Black now plays c5. But it is equal in such a way that against decent play, Black has no winning chances.

Equality with black pieces after 15 moves in the opening is good news. But when your opponent is rated 700 points below you on the Elo scale, you are not too happy. In such a situation, should you overstretch and try to extract water from stone or just be objective and be happy with the half point. It's difficult to say what is the right approach. I think from a long term point of view being objective is very important. For eg. look at the game below. Divya stretched and stretched and before she knew it, she was completely lost. It was only because her opponent agreed for a draw in a completely won position that she could survive. 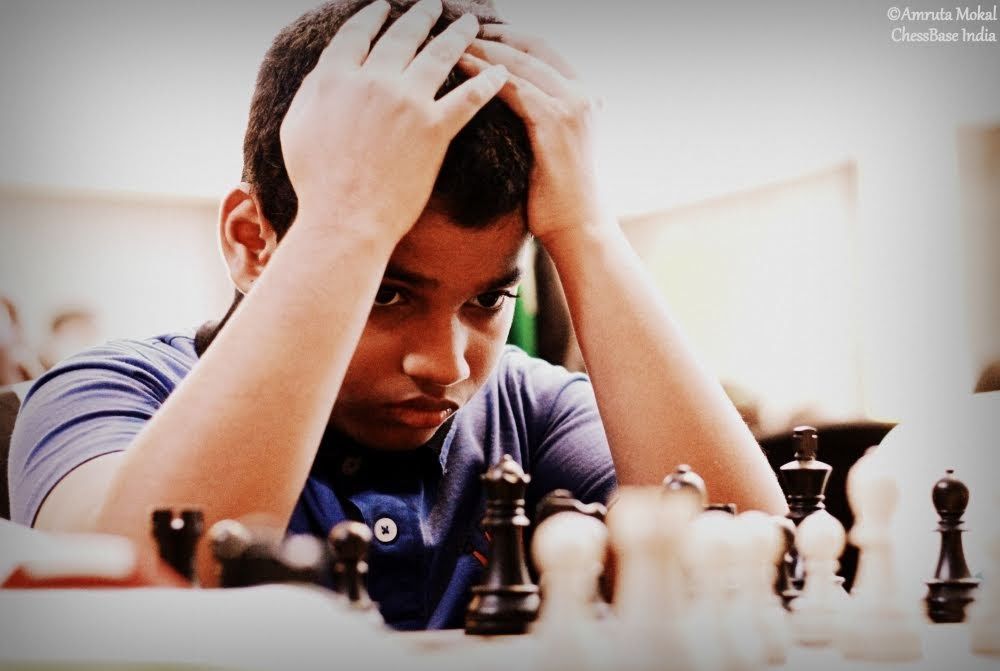 The boy to watch out for is Om Kadam. He is the top seed in the under-10 open section. And he is also playing in the afternoon. He won his game in the under-10 category and drew against Kushagra Mohan in the open. | Photo: Amruta Mokal 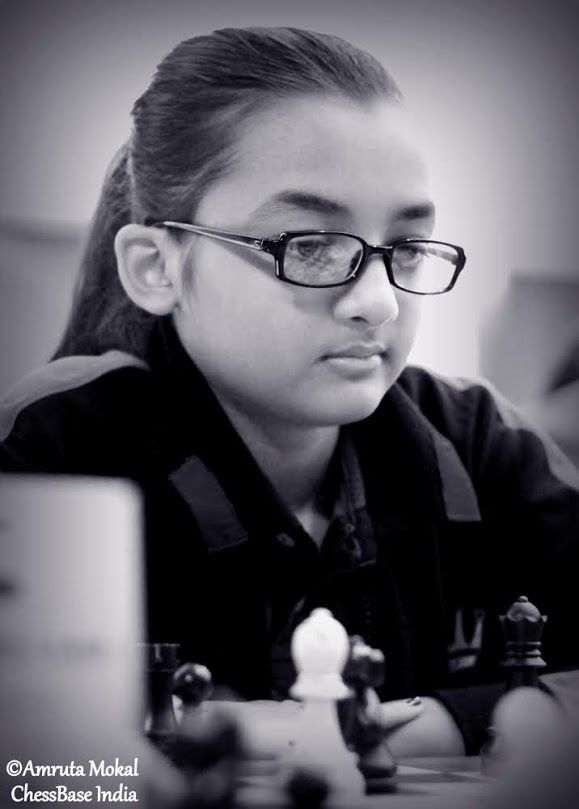 Vishwa Vasnawala with a rating of 1758 is not just the top seed of the under-12 girls section but is also ranked number one in India | Photo: Amruta Mokal 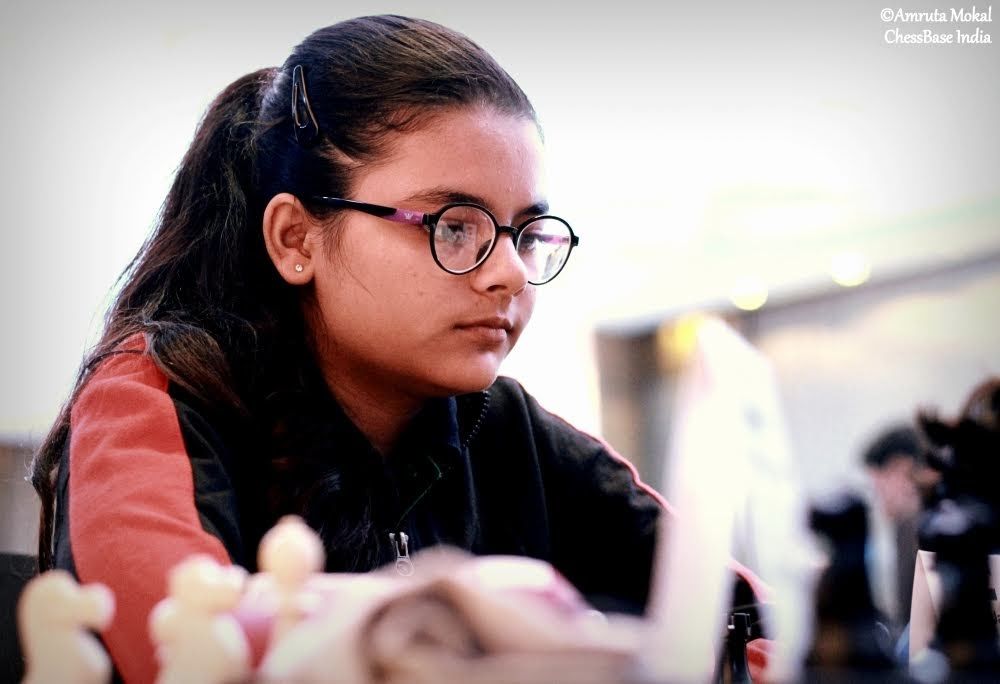 Nityata Jain, the pride of Madhya Pradesh is the top seed in the under-14 girls section. Nityata has been growing from strength to strength in the last couple of years and it is highly possible that she would become a WIM within a year! | Photo: Amruta Mokal

M. Mahalakshmi with a rating of 2238 is surely the favourite in the under-20 section of girls! | Photo: Amruta Mokal 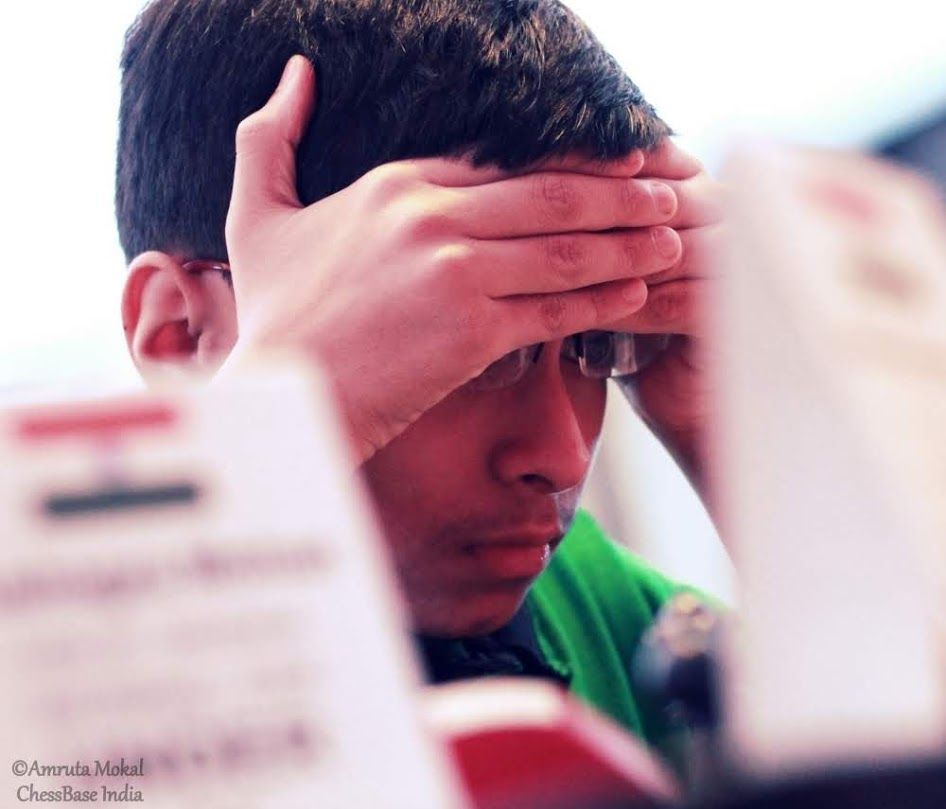 Kushagra Mohan is the top seed is the under-14 category. The boy has been fighting hard in the Indian circuit for many years now and has crossed the Elo of 2300. He is well and truly on his way to becoming an IM soon. | Photo: Amruta Mokal 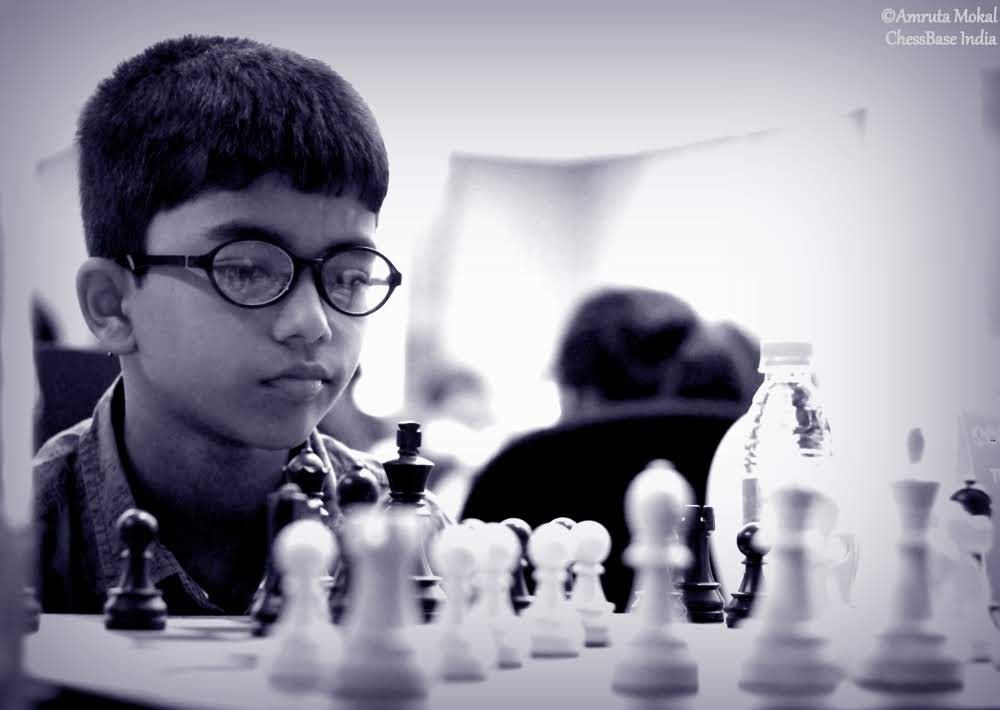 The top seed in the under-8 section Manon Reja Neer from Bangladesh | Photo: Amruta Mokal 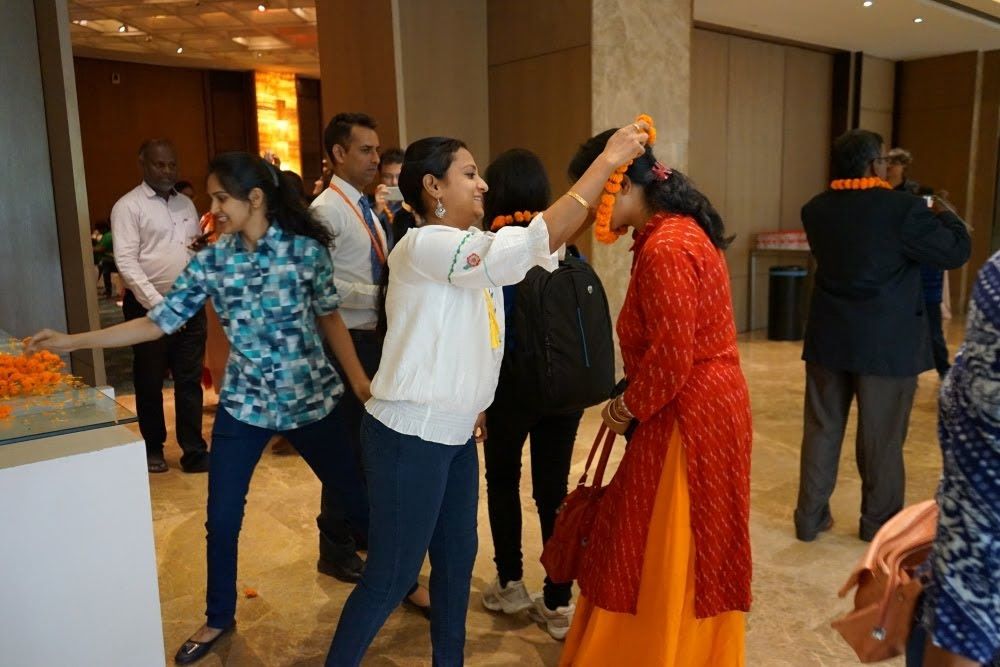 All the players, parents and officials were given garlands and welcomed for the opening ceremony! | Photo: Amruta Mokal 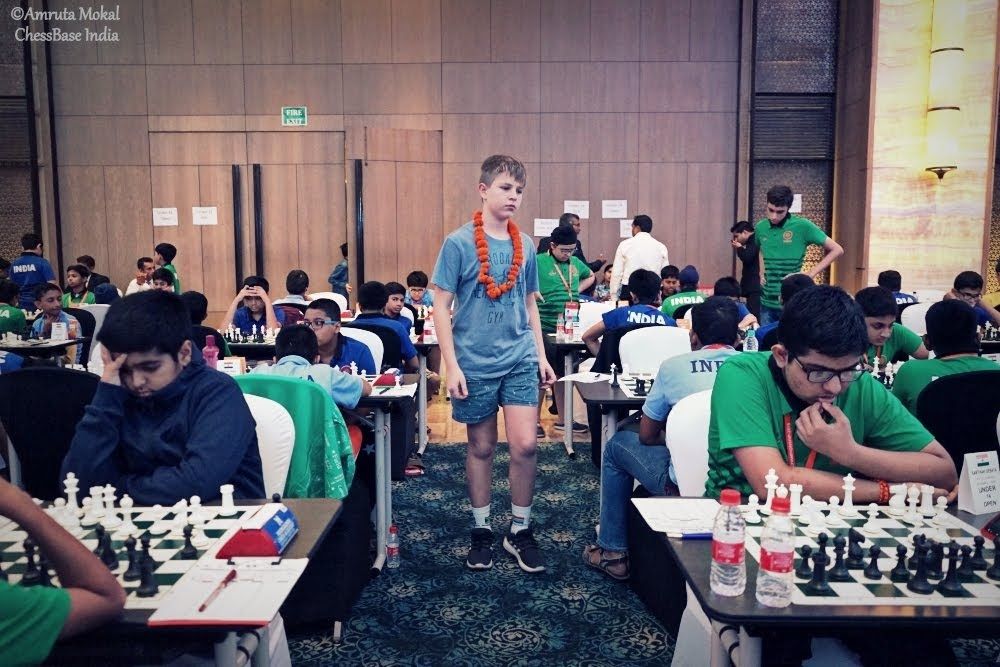 Some players didn't remove them for the entire duration of round one! | Photo: Amruta Mokal 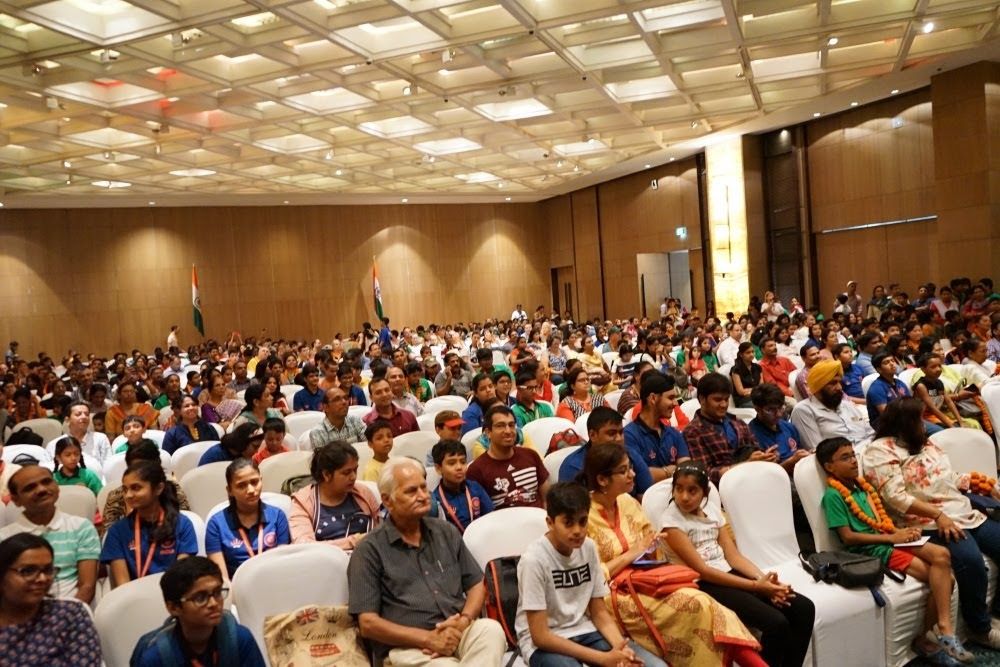 A huge turnout to the opening ceremony | Photo: Amruta Mokal 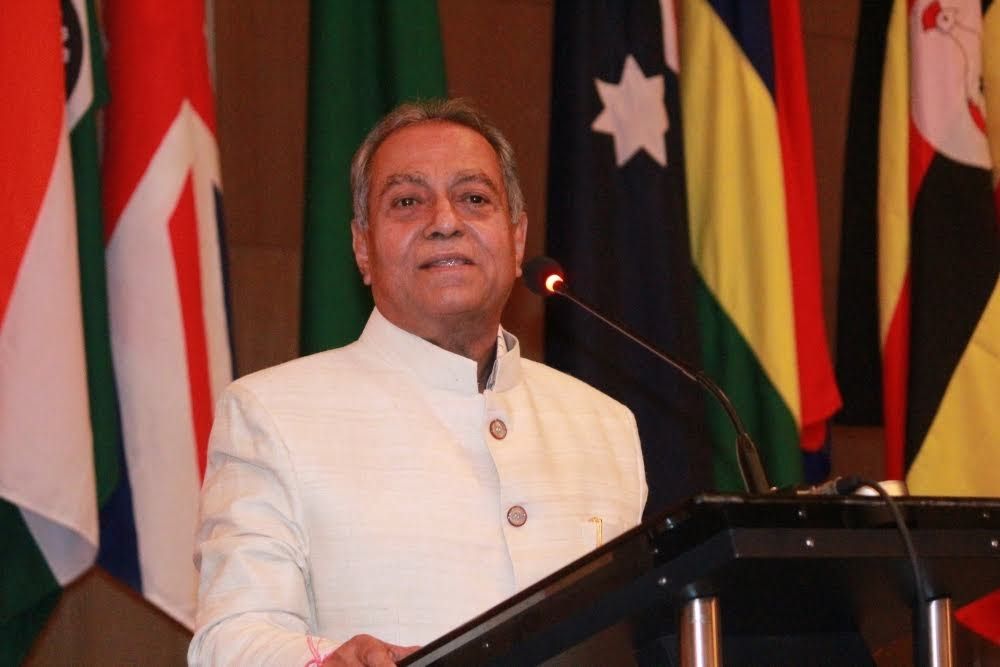 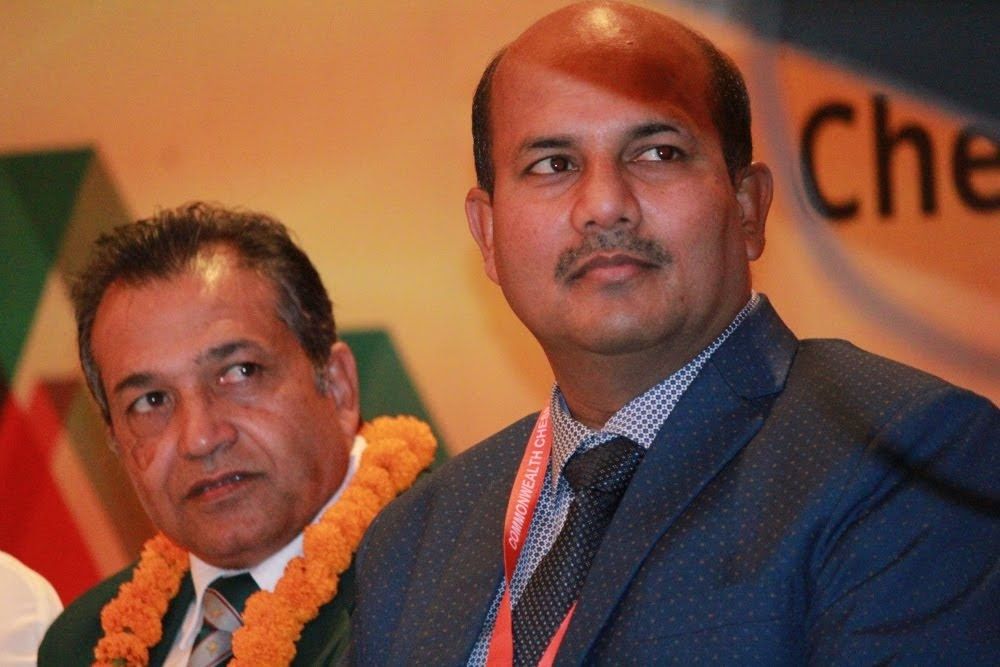 The man who has worked really hard to make sure everything is perfectly set for this grand event - Secretary of Delhi Chess Mr. A.K Verma | Photo: Amruta Mokal 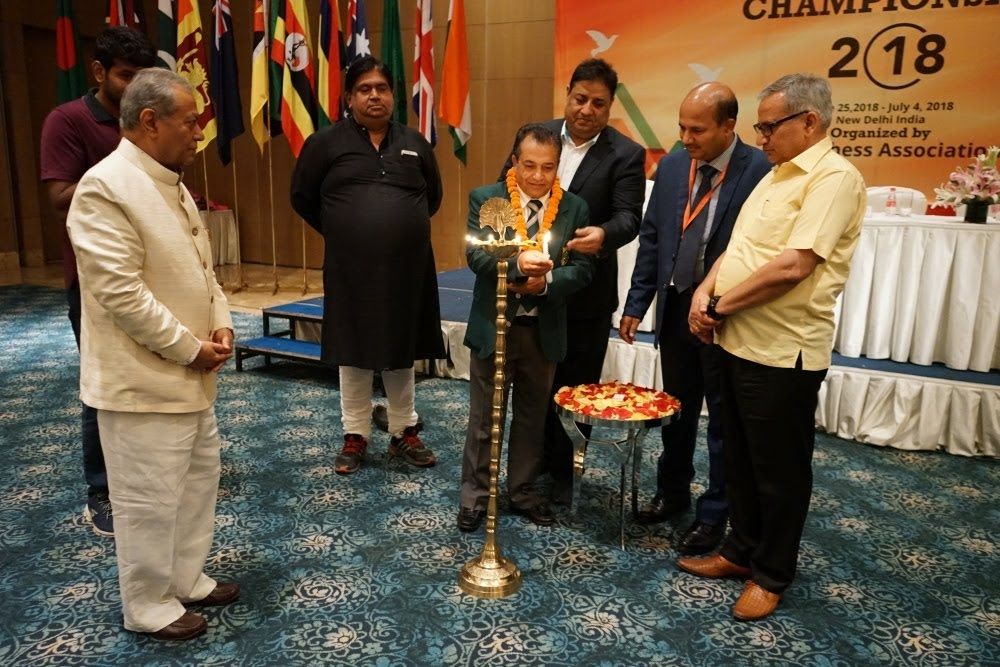 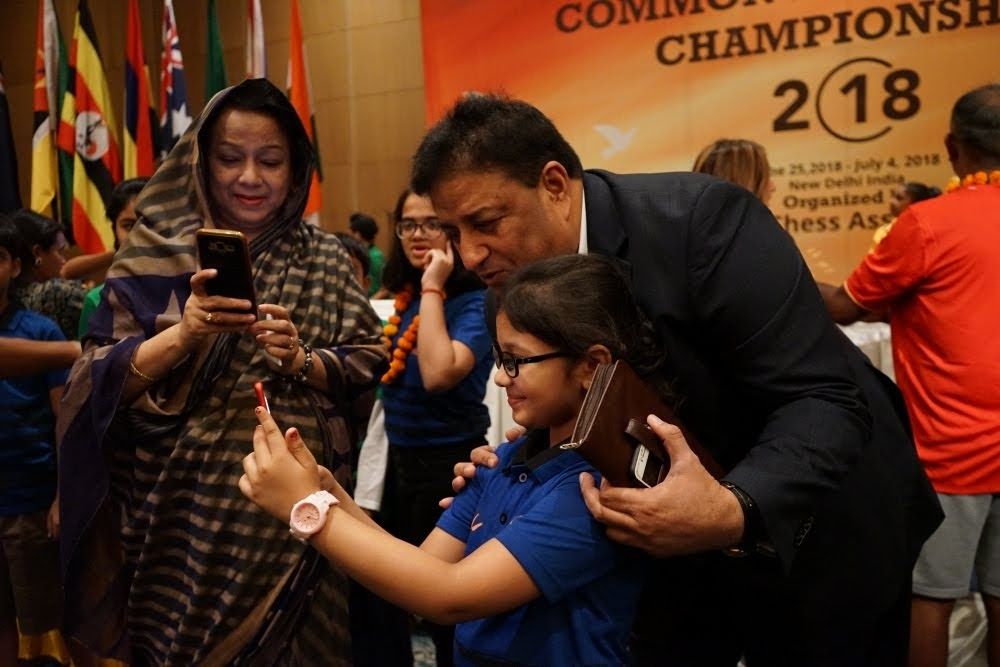 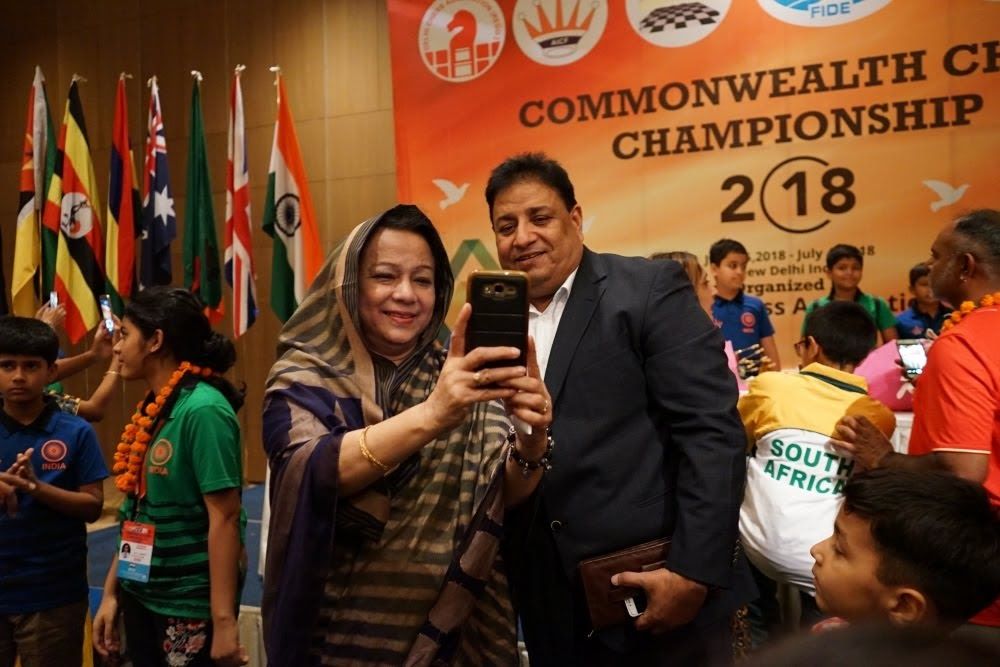 Rani Hamid is 73 years old, but she is well versed with the selfie technology! | Photo: Amruta Mokal

Round one overview of the Commonwealth Championships 2018
Bharat Singh Chauhan lauds Praggnanandhaa's achievement
The Opening Ceremony
Interview with Bhaskar, father of Savitha Shri