China vs The World: China lifts the trophy

The final day of China versus the world match featured some amazing miniatures, inspiring comebacks and also a few incredible blunders! While the World team failed to overcome their two-point deficit on the final day, they came close and made sure the Chinese did not declare victory without breaking a sweat. Day 2 report and games.

The Lee Hai Cup 2018, a.k.a. "China versus the World" came to a close on the evening of April 9th, 2018, at the Arcadia Hotel in Liaocheng, China. Going into the second day, the Chinese team was ahead by two points. At the end of the scheduled four rounds, both China and the World had scored two points apiece bringing the final score tally to 11:9 in favour of China.

Interestingly, the results of the first three rounds on the second day were just the same as on day 1. The first round of the day was a draw; China won the second one with a 4:1 margin and the World team came back with a 3:2 win in the third. 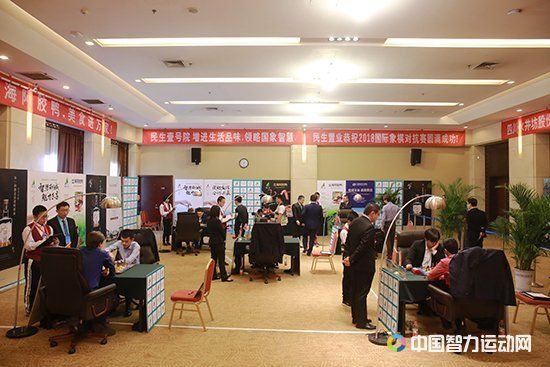 In the fourth round of the day (the tenth of the match), the World was in a must-win situation. Hopes diminished for the World team after Yu Yangyi demolished Dubov within 25 moves in a Pirc Defence. American GM Sam Shankland, who had had a terrible event so far, rose to the occasion at this point and scored a crucial win against Li Chao to level scores. Had the World team managed to pull off one more victory, they would have succeeded in levelling the match. But that was not to be; all three of the remaining games were drawn leaving China two points ahead in the final tally. 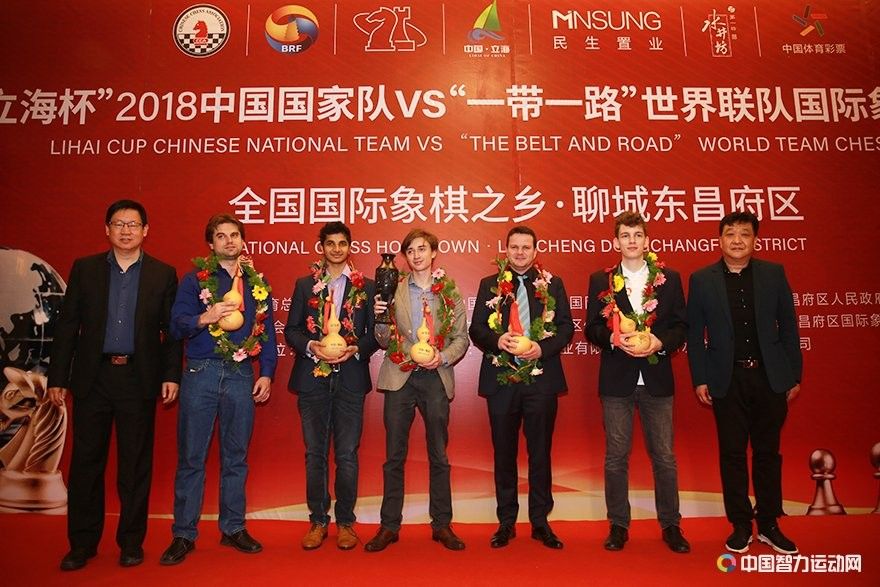 The world team at the closing ceremony | Photo: Official Website

In the opening round of the second day, the top board for the ‘Rest of the World’ team — Jan-Krzysztof Duda — scored his first win of the event against the second highest rated member of the Chinese team, Yu Yangyi. For Duda, this was a welcome victory especially after his disappointing show on the first day of the match.

Duda had the white pieces in the game and went for the fashionable closed Italian. Yu Yangyi broke open in the centre quite early and stationed his central pawns menacingly on e4 and f4. However, Yu began to falter around the 20th move and lost an exchange. With an extra exchange and an overwhelming position, converting the game was child’s play for the Polish GM. 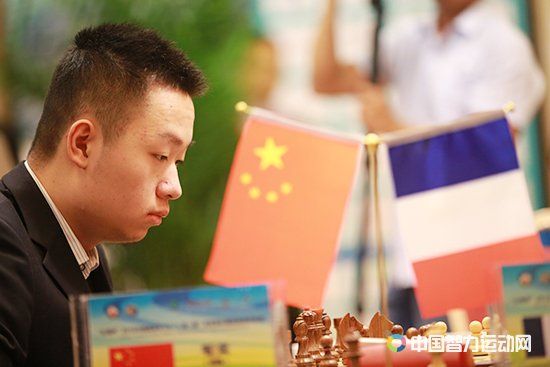 China’s strike in the round came on the second board where Wei Yi defeated GM Etienne Bacrot in merely 20 moves from the black side of a French Tarrasch. The game got extremely sharp within the first ten moves. Bacrot seemed to be in good control but an unfortunate blunder on the 20th move turned the game in Wei Yi’s favour. Bacrot resigned immediately after his opponent played the refutation.

Round 8 was a total disaster for the World team. China won this round with a score of 4:1, winning three and drawing two of the games.

On the first board, Vidit Gujrathi was beaten convincingly by the Chinese top seed, Ding Liren, in a King’s Indian Defence. Quite uncharacteristically, Vidit made some tactically suspicious moves in the middle game and ended up in a dead lost position. Ding missed the crushing exchange sacrifice 24.Rxd4 a couple of times before finally playing on his 26th turn. Once the exchange sac was on the board, unavertable mates loomed around the black king. Vidit resigned three moves later.

Yu Yangyi against Sam Shankland was another miniature that lasted only 24 moves. In a Ruy Lopez Archangel, Shankland was only slightly worse out of the opening when, on his 21st move, the American picked the wrong piece to place on the d6 square and had to resign three moves later.

The ninth round saw the rest of the world team make a nice comeback beating China with a score of 3:2. Also, the round was quite an entertaining one with three out of the five games finishing decisively.

On the first board, Jan-Krzysztof Duda crushed Li Chao from the white side of an English Opening. Having sacrificed an exchange earlier on the queenside, Duda generated an overwhelming attack on the black king. On his 26th turn, Li was forced to give up his queen in order to avoid mate and resigned soon after. 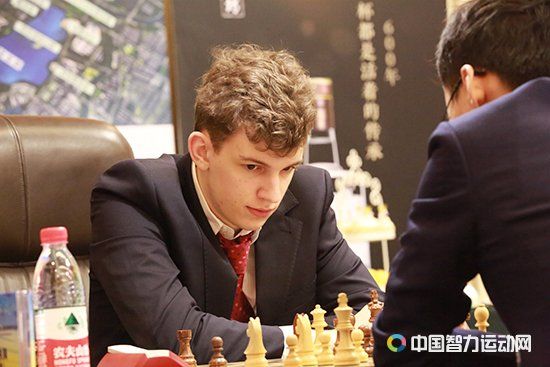 Duda during one of his earlier games | Photo: Official Website

In a more traditional kingside attack, Daniil Dubov got the better of the Chinese top seed, Ding Liren. The highlight of the game was the Russian GM’s positional queen sacrifice with which he mobilized his central pawns into dangerous passers.

Another startling highlight of the round was Etienne Bacrot’s patzer blunder in his game against Bu Xiangzhi. The Frenchman was already under a bit of pressure trying to put his opponent’s queenside passer under lock and key when he incredibly moved his rook to a square where it was en prise. Bu accepted the gift instantly and Bacrot had no option but to resign. 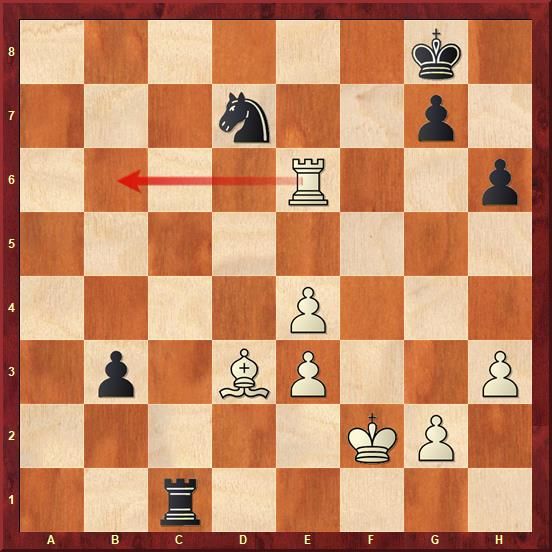 Believe it or not, Bacrot played Rb6 here!

The tenth and the final round, American GM, Sam Shankland won his first and only game of this entire match against Li Chao. After a tense middle game that arose out of a Benko Gambit, Shankland generated a strong initiative against the white king. Li Chao’s tried seeking counterplay against black’s king but his 37.Bf8 stretched it too far. Shankland broke open the kingside by taking with his rook on f2 and all kinds of mating threats loomed over the white king.

Yu Yangyi avenged the loss of Ding Liren in the previous round, beating Daniil Dubov in merely 25 moves. Yu Yangyi was only slightly better in this game when Dubov blundered and lost an exchange. The game did not continue for too long after this. 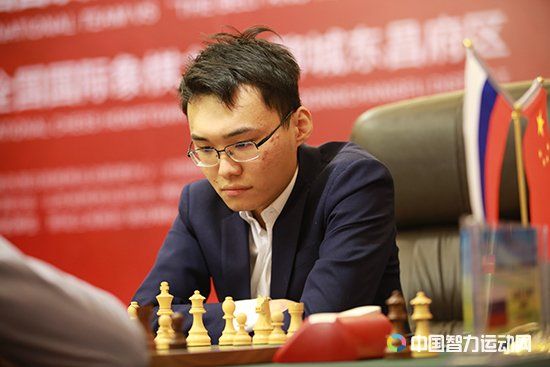 After Li Chao's loss, it was Yu Yangyi who saved the day for China by winning his game | Photo: Official Website

Performance Chart of all players

China vs The World: The Dragon Dominates