Sinquefield Cup 2018 Round 6: Caruana in sole lead after beating Karjakin

With a straightforward win against the former world championship contender Karjakin, current contender of the world championship Fabiano Caruana took the sole lead at the end of the round 6 in Sinquefield Cup 2018 and with this win Caruana has inched closer to Carlsen in the live rating list. If he is able to beat Carlsen in the epic 7th round encounter then Caruana would become world number 1 for the first time in his life. After a day off IM V.Saravanan is back again with his informative coverage of the event and we also have game annotations of So - Anand by Tanmay Srinath

Friday was a day of rain at Saint Louis, and as one reached the tournament hall, one couldn’t ignore the damp around the place, especially the ‘biggest chess piece in the world’: 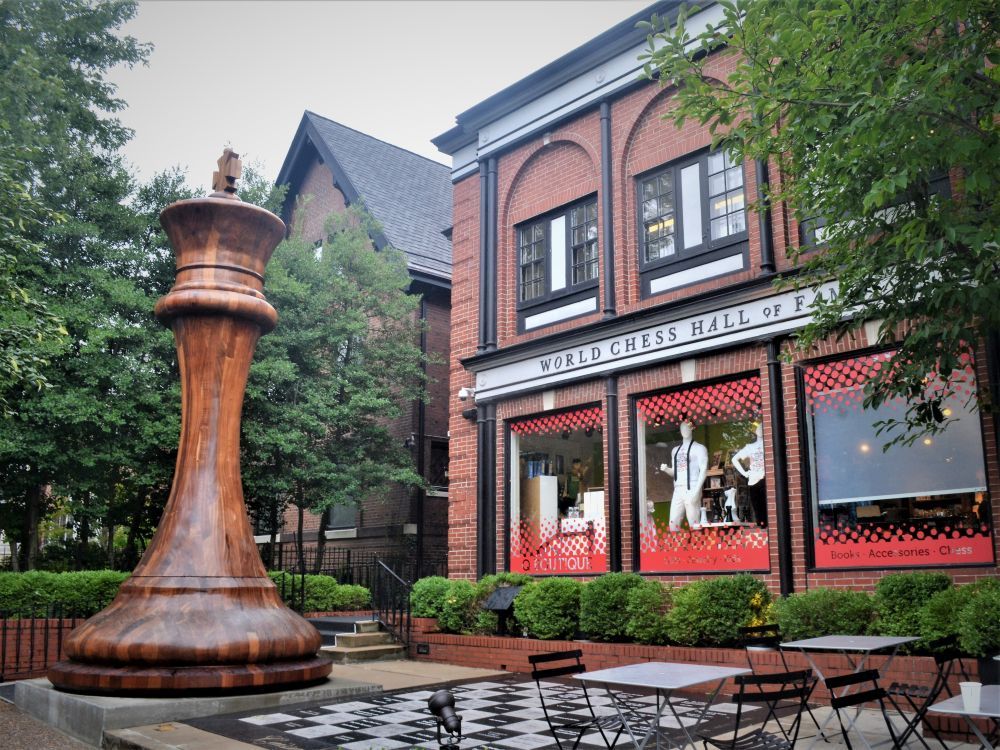 The huge King in front of the hall of fame, fresh with damp from the drizzle | Photo – V.Saravanan

Rain always brings out a feeling of sedateness, calm. But everything was bound to change within an hour of the start of the round...

On the rest day, we were treated to an inspiring spectacle from the world champion: 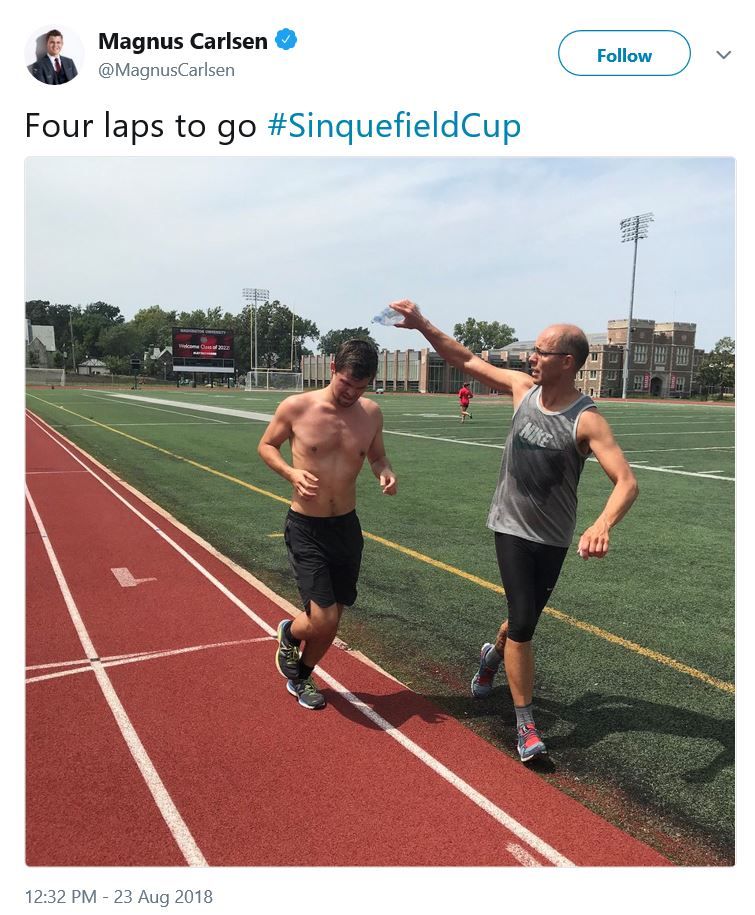 But not only to him, the rest day indeed seems to have done wonders to everyone’s spirits as the 6th round exploded at Saint Louis today, as full-fledged bare knuckle fights were witnessed on all the boards.

So Wesley was the first one create the buzz on Friday, with a Novelty on the 14th move in the Queen’s Gambit Declined, in the line Anand had used efficiently to shut down Aronian’s white in the previous round. Following the same line he came up with… 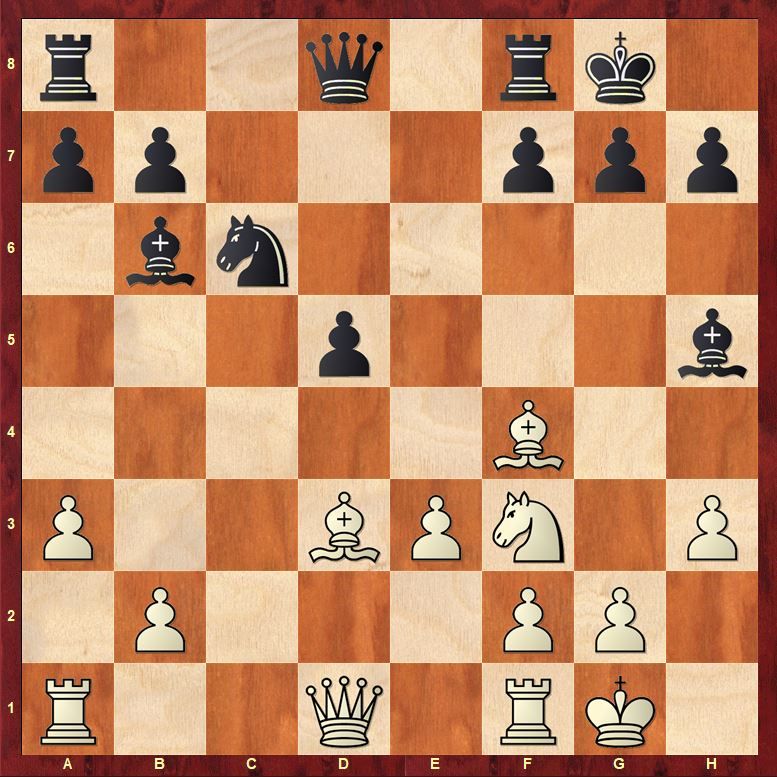 14.Bb1! Novelty. The most remarkable fact about this new move is that, it has not been played in Correspondence or Computer chess also. That’s a rare factor - in current top level chess, many moves get played on the board for seemingly the first time, but have already been played between Correspondence players or Computers, hence mostly assumed to be known by everyone even if it hasn’t been played before between humans. So, Wesley deserves all our praise for unearthing this remarkable move. 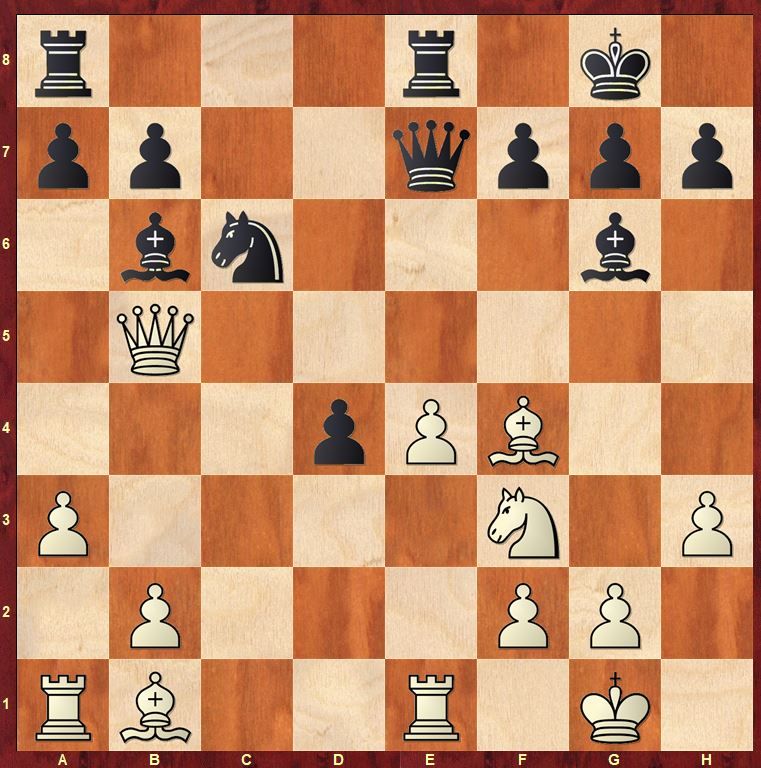 18...f6?! Here, Anand probably should have waited with 18...h6. 19.Nh4?! Wesley probably should have continued 19.e5 Bxb1 20.Rab1 fxe5 21.Be5 with some advantage. When Chessbase asked both the players after the game, Anand freely admitted that he ‘didn’t like my position, though I am not sure (at that time) how white could have improved his play after the opening stage”. But Wesley felt that he did not have ‘any significant advantage out of the opening’. 19...Bf7 20.Nf5 Qc5 with near equality. 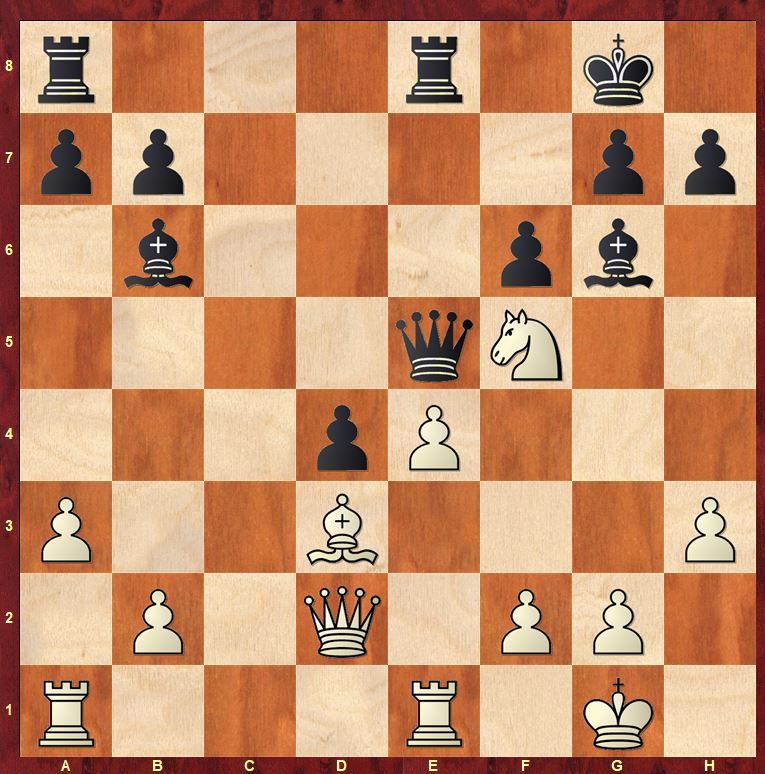 Here came one of Anand’s favourite elements of play, giving up his bishop for the knight: 24...Bxf5?! [Once again, black could have simply waited with 24...Kh8 or 24...Rac8] 25.exf5 Qd5 26.Qc2 Kf8 27.Re6? [Wesley pointed out to us that this was probably his biggest mistake in the game, preferring the simple 27.Rac1 maintaining the advantage] 27...Rxe6 28.fxe6 g6 and though white still held a little advantage, he couldn’t make such headway. 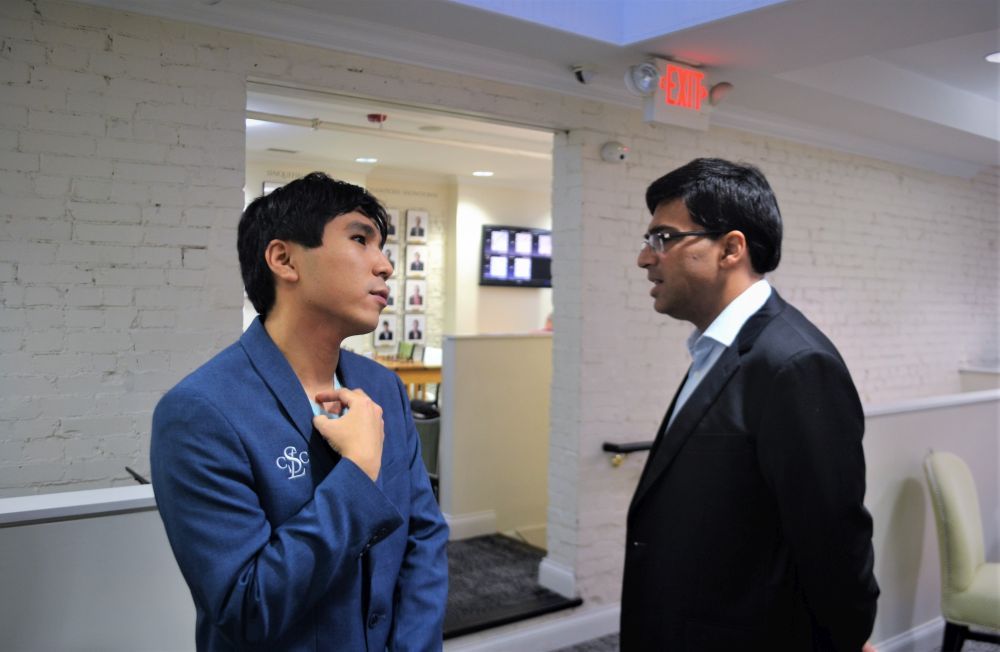 So and Anand chat up after the game, though both of them weren’t sure at this point if white missed any clear way to increase his advantage | Photo – V.Saravanan

But though Wesley’s game initially attracted lot of attention, by now the whole world was astonished to watch the world champion’s downslide: 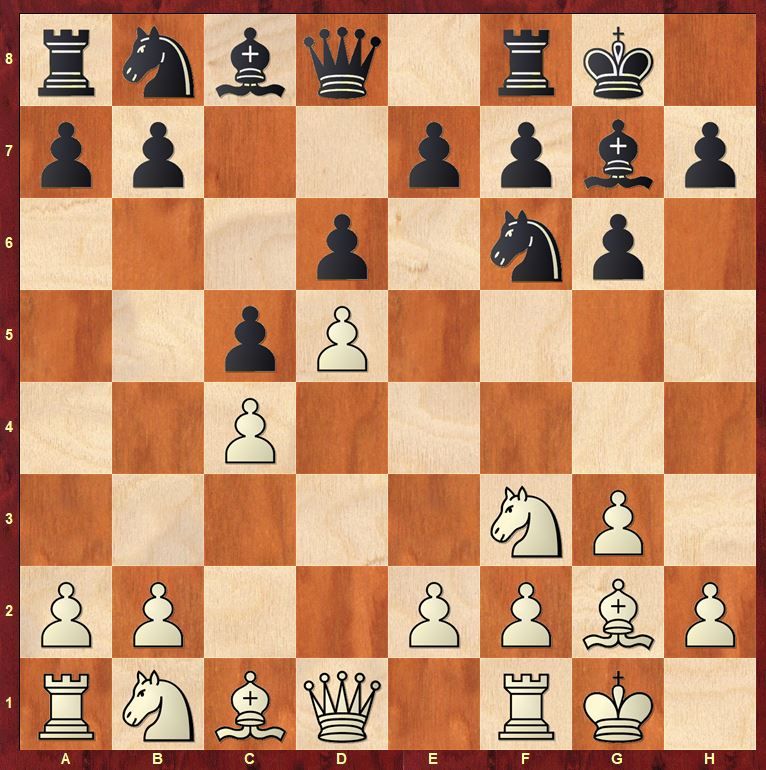 7...b5!? Though Carlsen has dabbled in the Benko Gambit a decade ago, this is the first time that he is playing it in a Kings Indian defence hybrid. Someone’s expanding his repertoire indeed! And once again, another inevitable question: is it another smokescreen before the world championship match?  8.cxb5 a6 9.bxa6 Bf5!?

This was a real surprise, as this is not the square you will envisage for the light square bishop in the Benko, but the a curious fact is that, this move has been played by Kasparov in 1994 and Anand in 1996!

The start of Carlsen’s problems could be fixed as the following position: 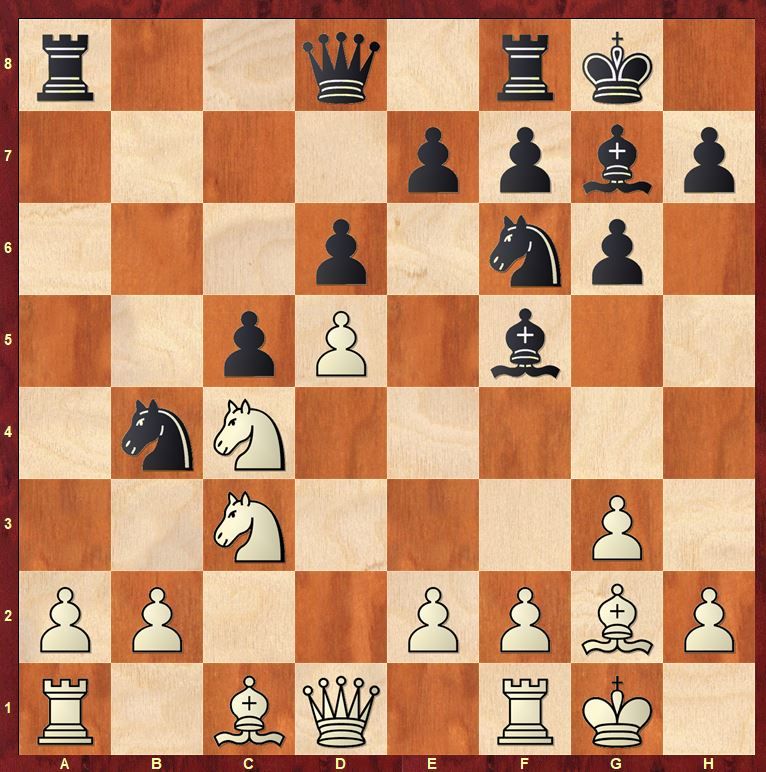 [14...Bxe4 was better here, as pointed out by Peter Svidler who was surprised by the speed with which Carlsen went for the text. In his colourful words, “For Magnus to play this fast in a position of such complicatedness, I think it speaks to a degree of shock. It is very very unusual for Magnus not to consider his possibilities quite carefully in a position this difficult and a game which is important… As every Russian schoolboy gets taught, you just sit on your hands - just don’t allow yourself to make a move!”] 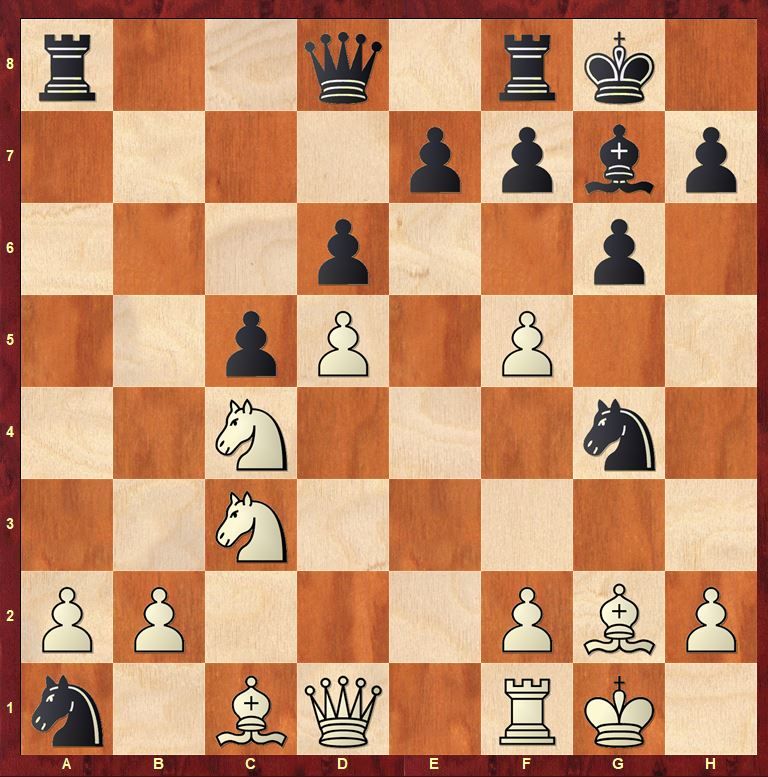 Now white can afford to support a2 first, and gobble up the knight on a1 in his own leisure. White is winning here! 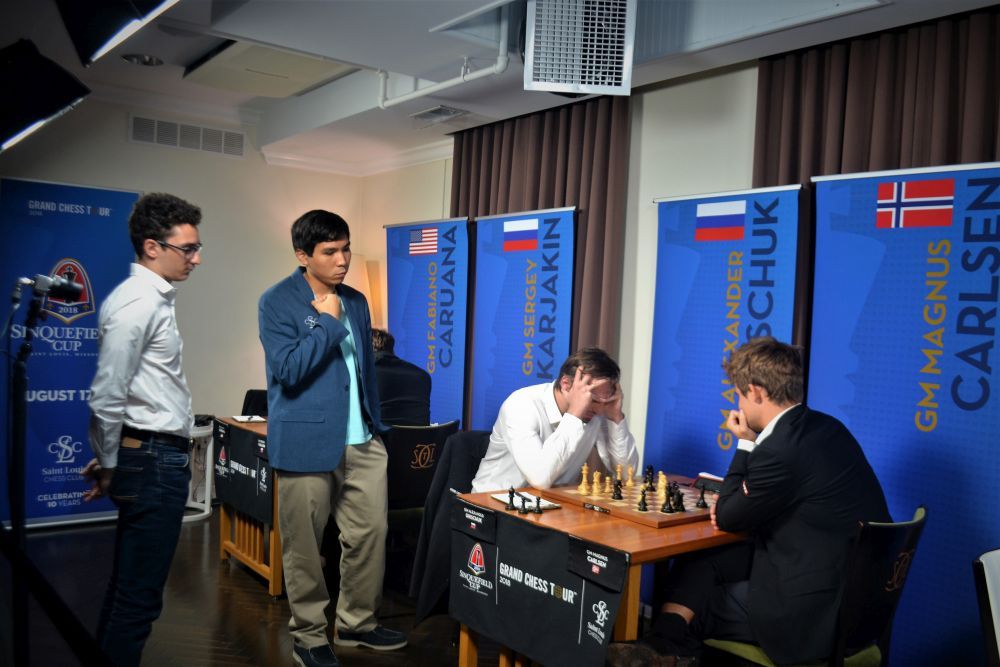 As the ancient Tamil wisdom goes, when an Elephant slips, word does travel fast in the jungle! | Photo – V.Saravanan 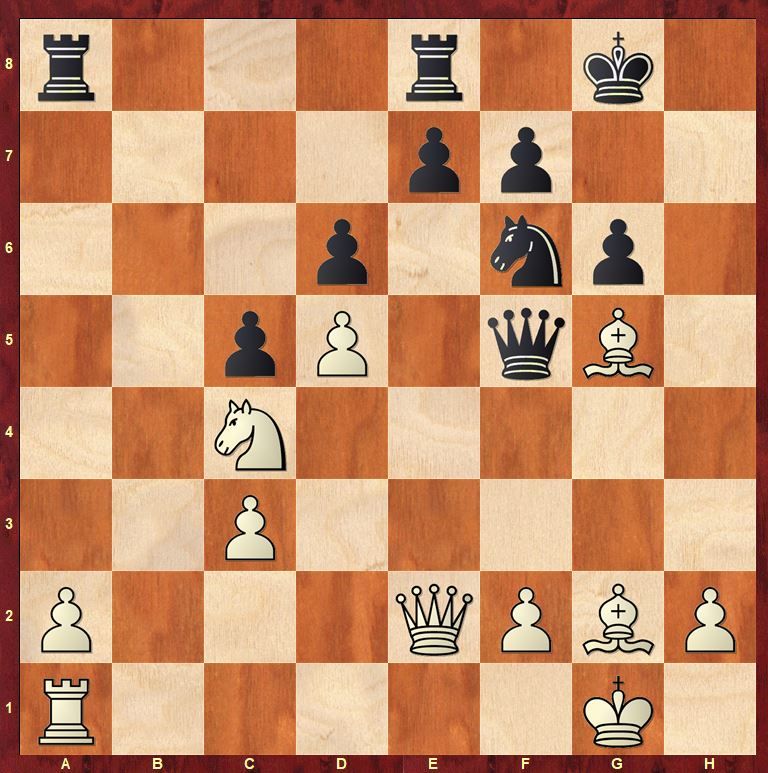 Looking at this position, Vachier-Lagrave admitted that he ‘thought Magnus was busted’. But here was Grischuk’s first slip, as he captured 20.Bxf6, when 20.h4 could have kept his large advantage intact. It is a typical engine suggestion, but it is not something you can decide on easily on the board. However, the logic behind the silicon suggestion is fantastic:

After 20.h4, black can never hope to capture on d5 due to a lot of simple tactics:

However, you cannot fault Grischuk’s decision, as he probably thought he could reach a ‘defined’ position and increase his advantage in an ending where his a-passer could be a trump.  He summed up his sins thus, “Somehow I already wanted to win without allowing any counterplay, and when you start to have this attitude too early a lot of times it leads to losing your advantage”.

Even though he still held some advantage, he missed a crucial move of Carlsen later on: 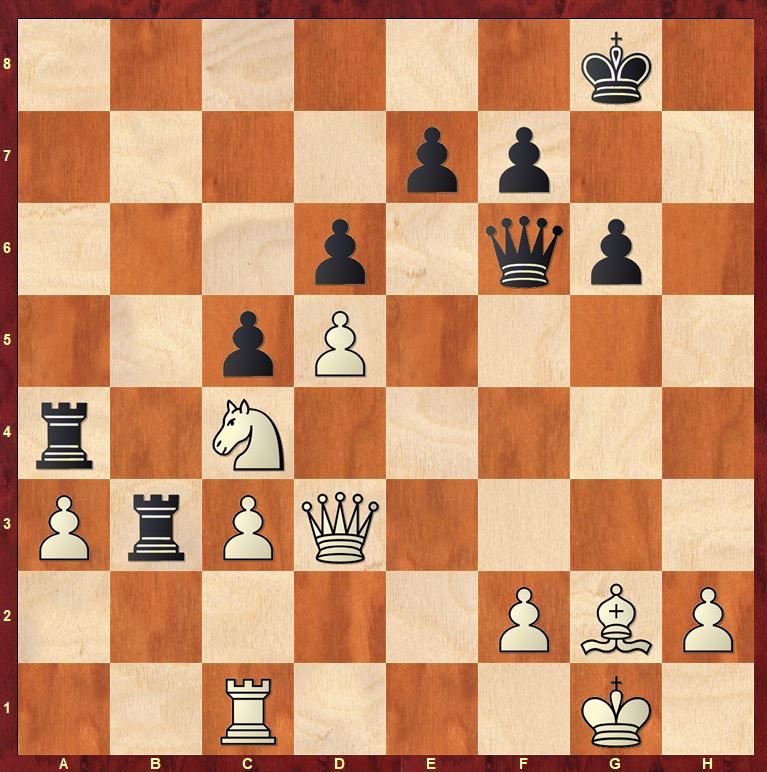 Grischuk was still under the impression that he was better here after 29.Qc2 but he had overlooked Carlsen’s counter 29...Qf4! and the game ended in a draw soon. 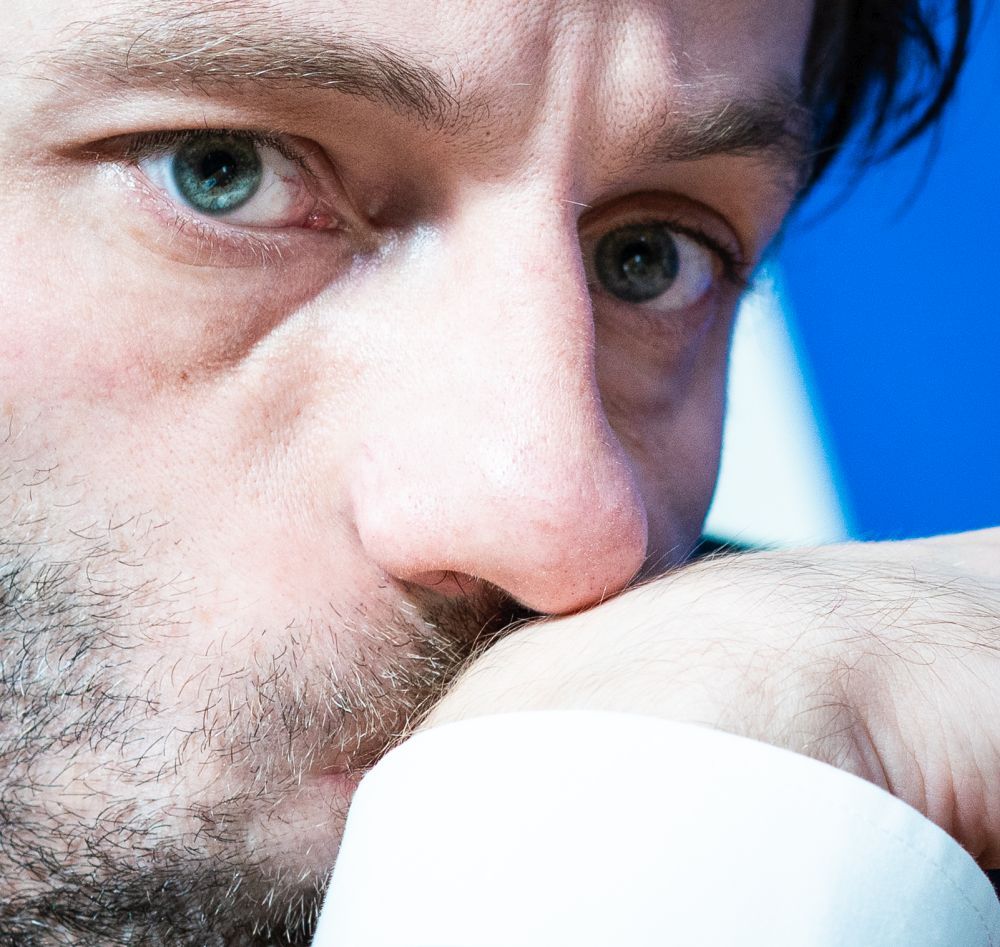 Another guy who missed out on converting a big advantage was Vachier-Lagrave: 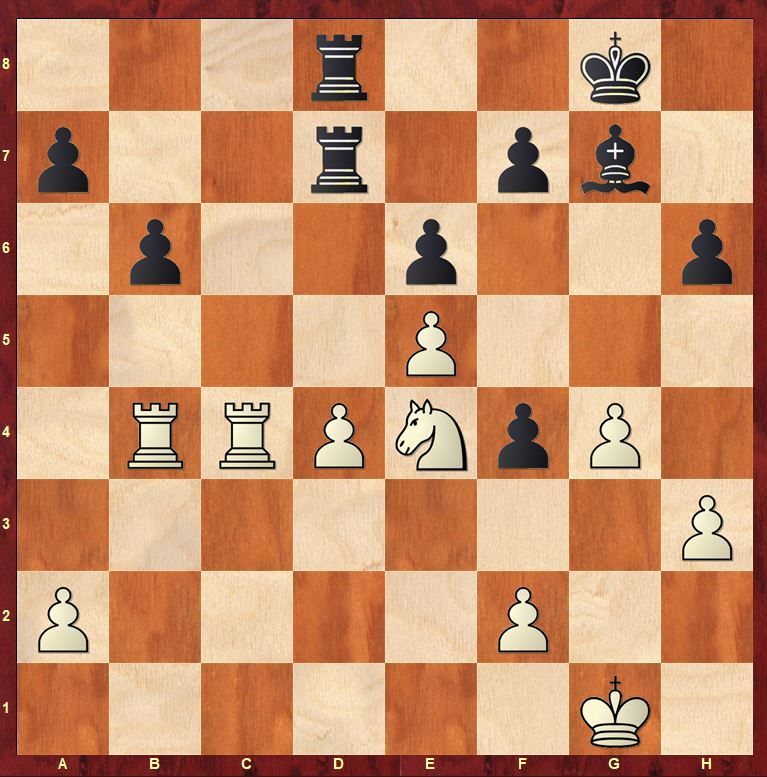 One guy who exudes a grim determination with his body language is Hikaru Nakamura. Leader of the Grand Chess Tour standings before this tournament, he is definitely thirsting for a comeback, and he has missed converting to wins in the previous two rounds. But a similar fate awaited him today also: 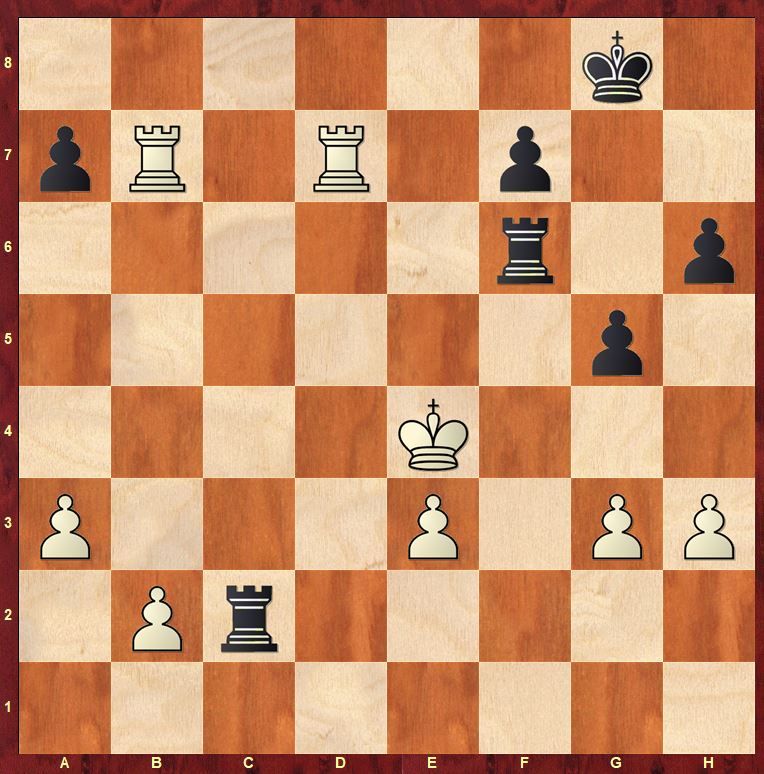 Mamedyarov voiced big surprise with this sequence of moves, “I don’t understand why he played this Rb8 check - 34.b4 is winning! I don’t think the position after 39...Rg3 is winning any more!” 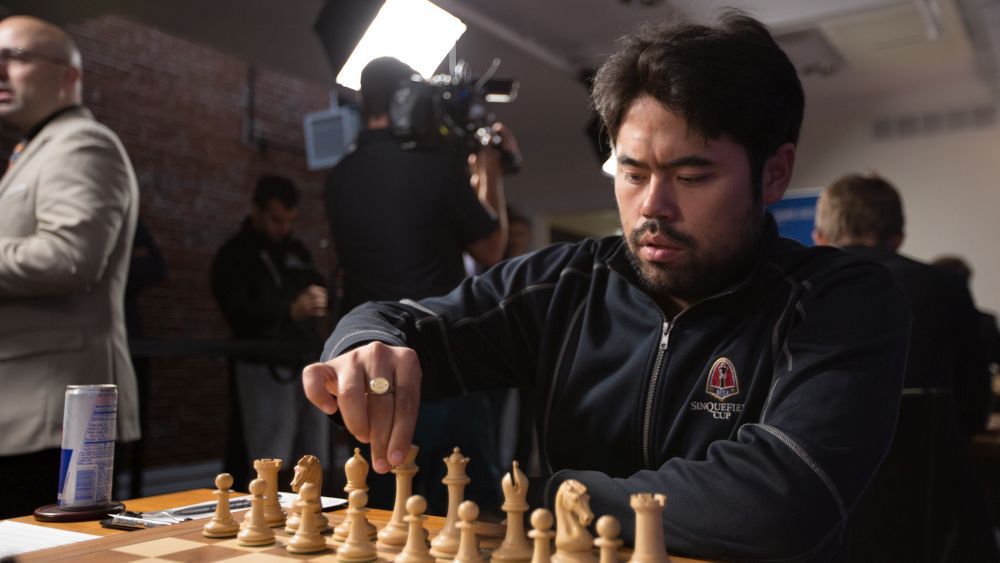 Going ahead, he even managed to get himself into a soup: 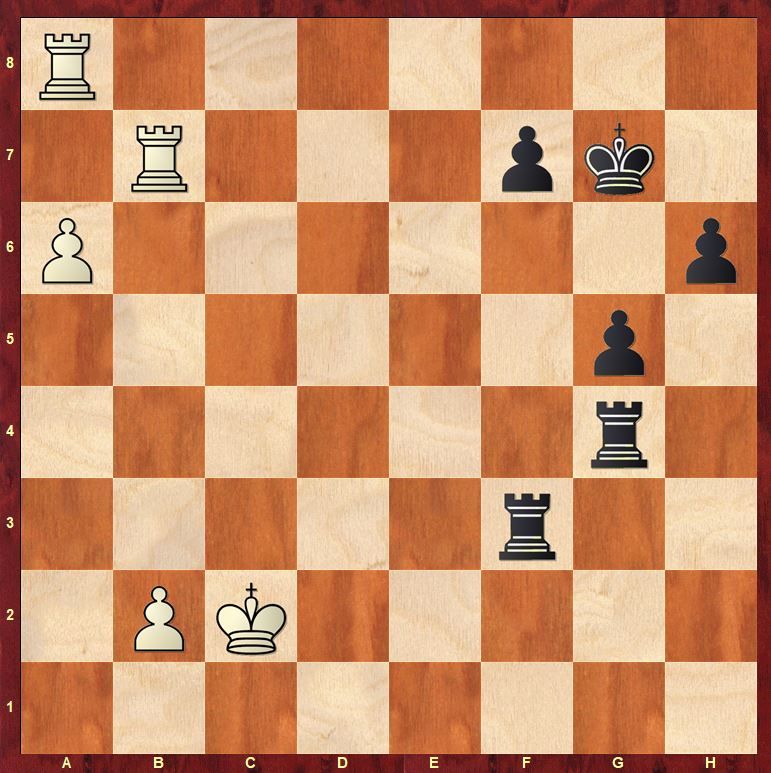 Don’t leave your seats yet. Just as this long rook ending was going on, we had some desperate people here at Saint Louis who wanted an early evening, including the… tournament director: 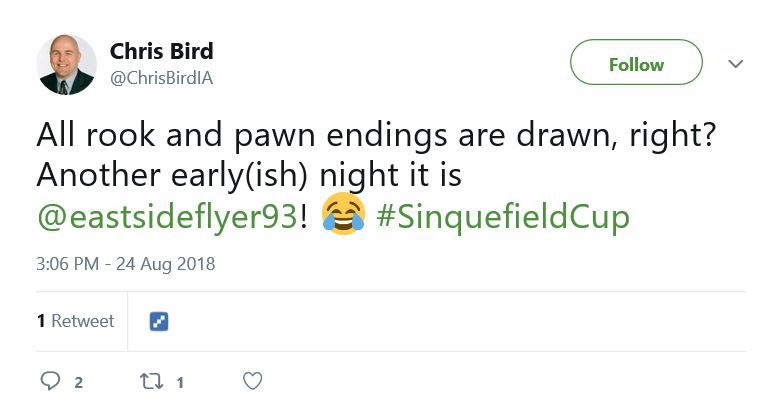 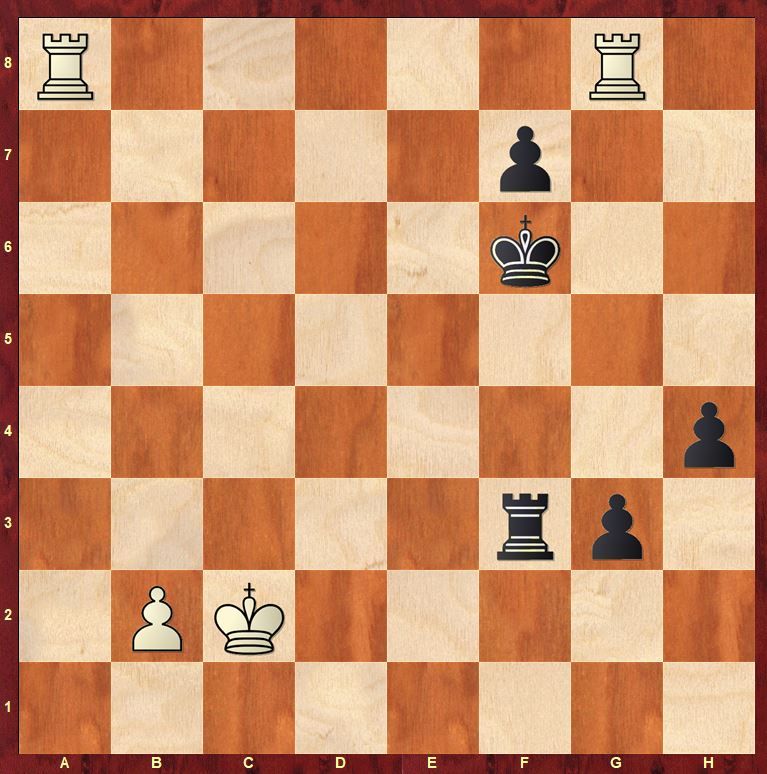 It is easily possible to write a small book on analysing this game, so we shall abandon it here for the reader’s further intrigues!

There is a huge buzz in Saint Louis on the upcoming world championship match between Carlsen and Caruana. When he enters the Saint Louis Club at the time of the round, Caruana almost always gets shouted with, “Good luck, Fabi!” by children, and a typical American, “Go get them, Champ!” by adults. He keeps it simply, honours as many people who come looking for autographs, and almost never disappoint fans. No wonder that Fabiano Caruana is right now the darling of the spectators who come to watch him play: 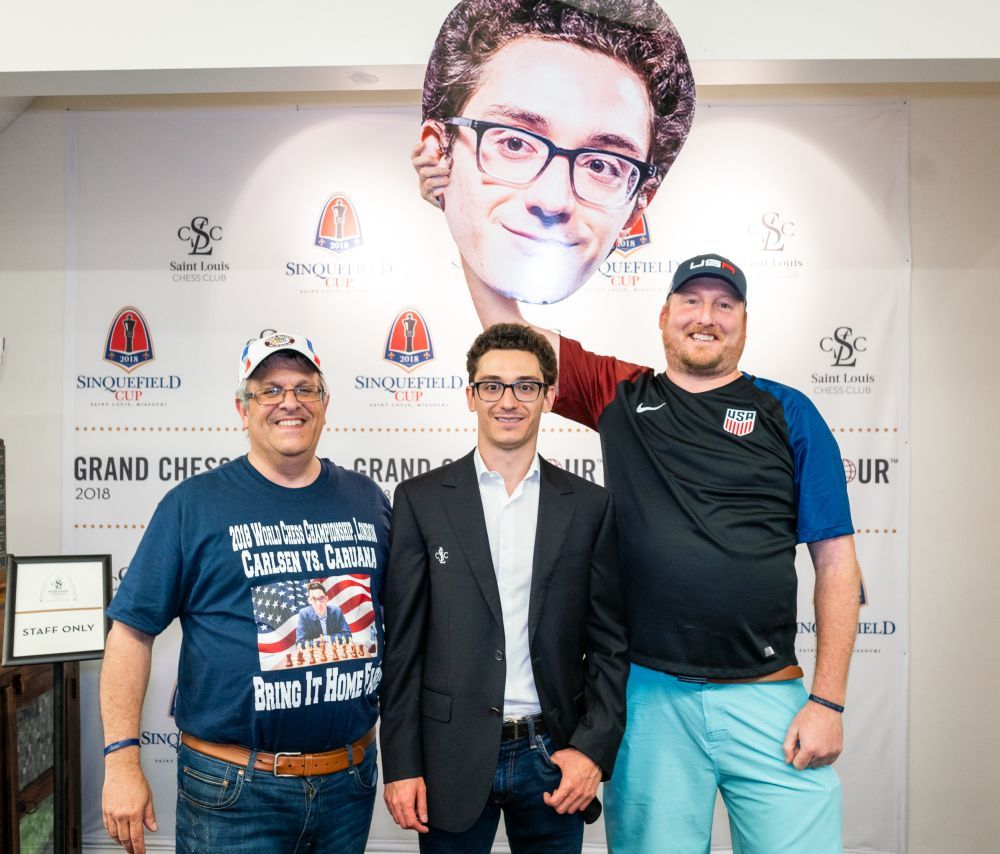 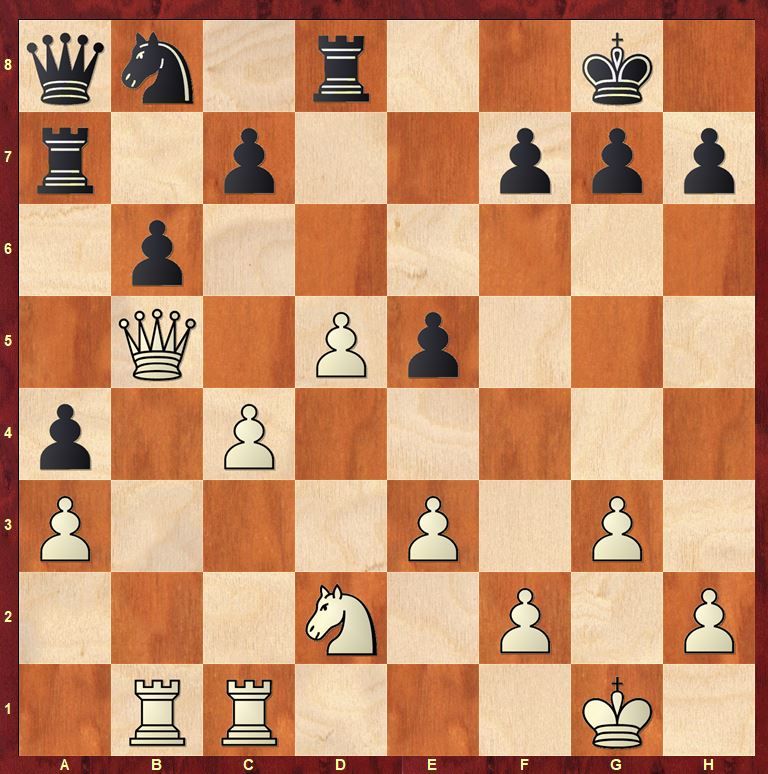 From all the mistakes of the day, we can only expect more of them in the coming days, and successful ones will probably be ones who avoid mistakes rather than those who make good moves… 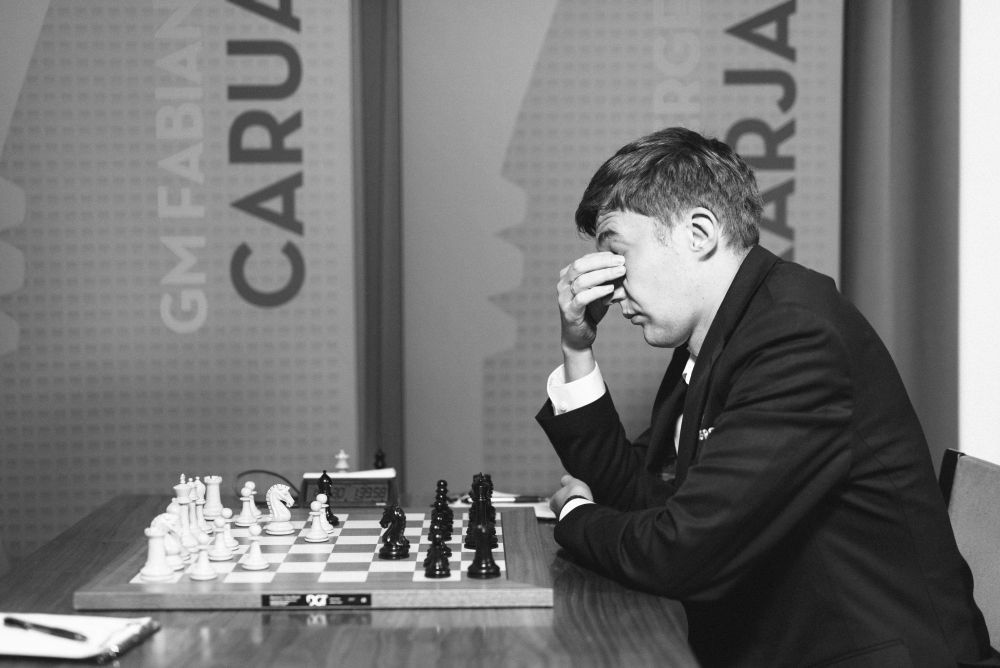 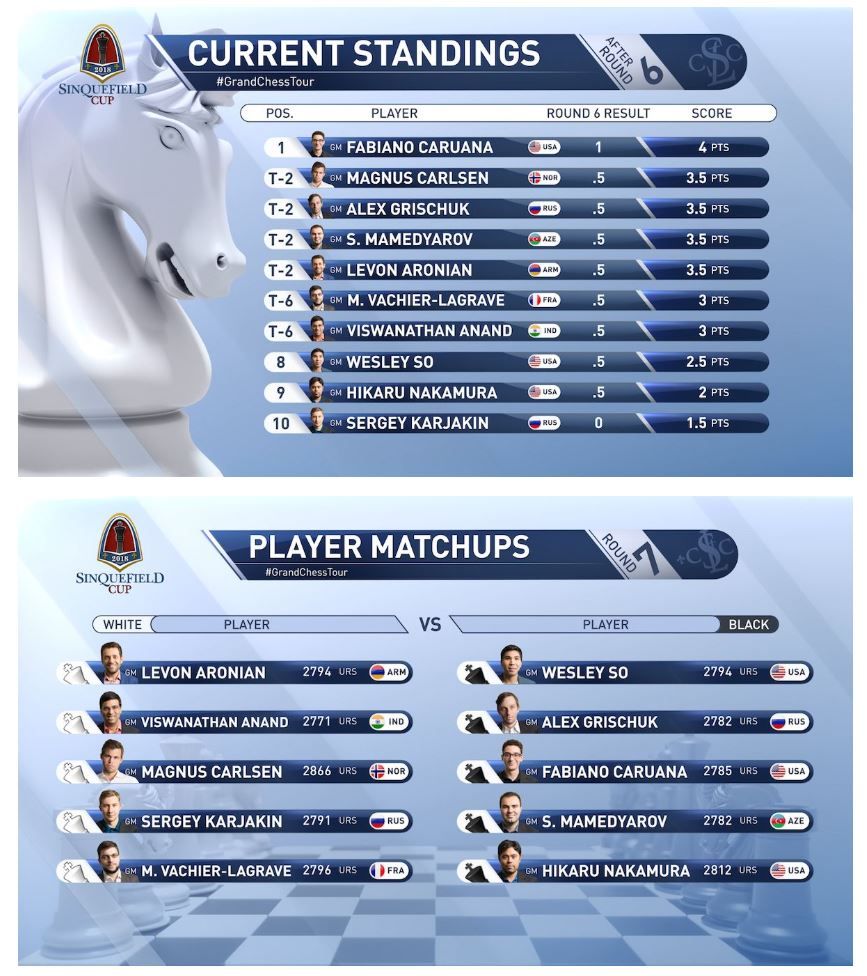