The seventh round of the 2018 Sinquefield Cup was the most awaited round of the event. The reigning world champion, Magnus Carlsen, was slated to face his title challenger, Fabiano Caruana, one last time before their World Championship match in London later this year. At some point, Magnus came very close to breaking through Caruana's seemingly bulletproof Petroff but with precise play, the newly elected world championship challenger managed to hold the mighty Magnus. With this draw, Caruana also maintained his lead in the tournament as all other games ended peacefully. We have a very exciting report of the round by IM V. Saravanan and annotations of the game Anand-Grischuk by Tanmay Srinath.

What do Americans do when a hurricane hits town? They first name it nicely, of course! Ever since the Sinquefield Cup started, this being the final showdown between the world champion and his challenger before their world championship, is the talk of the town. And their mutual encounter yesterday was nicely named ‘Super Saturday’.

When you reach the Saint Louis Chess Club and see crowds lining up to enter the tournament hall it hits you - it’s much more than just this game and tournament. This is a crowd to watch their own ‘Fabi’ take on the world champion today, to see a hint of a prelude to their summit clash in November. 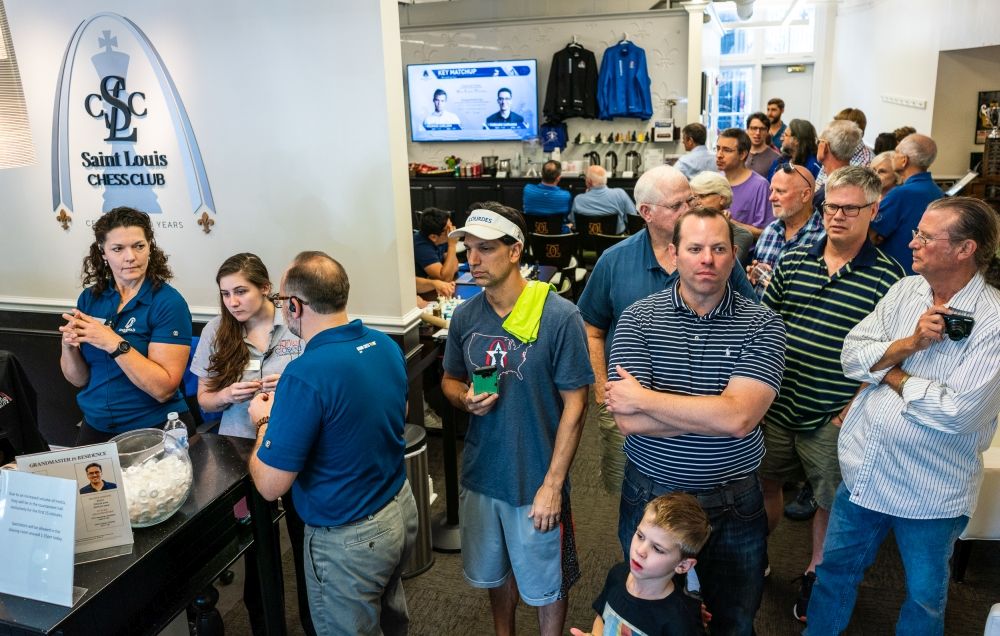 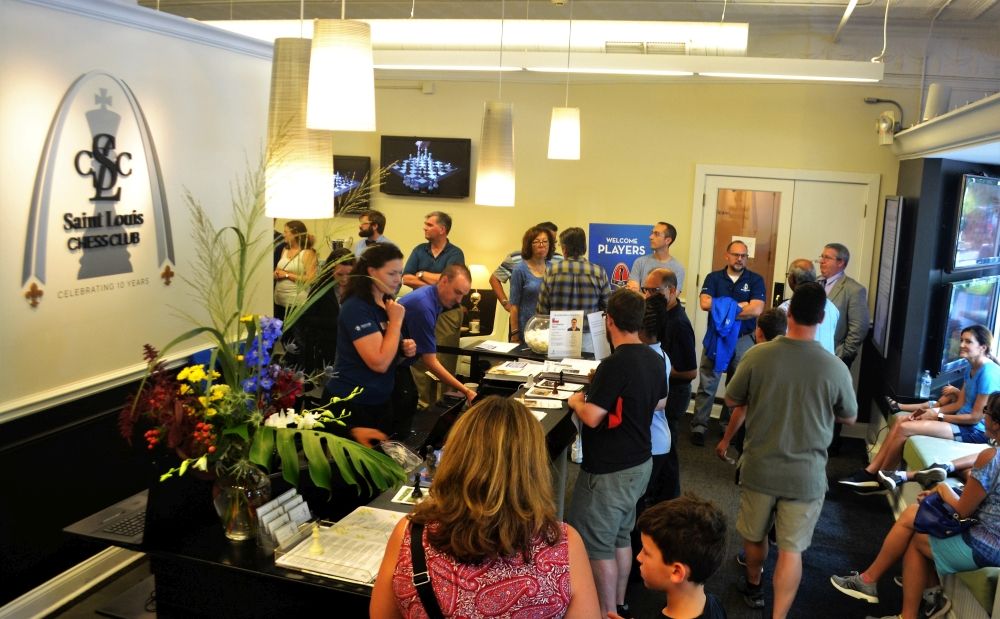 Crowded reception area where tickets were being sold | Photo – V.Saravanan 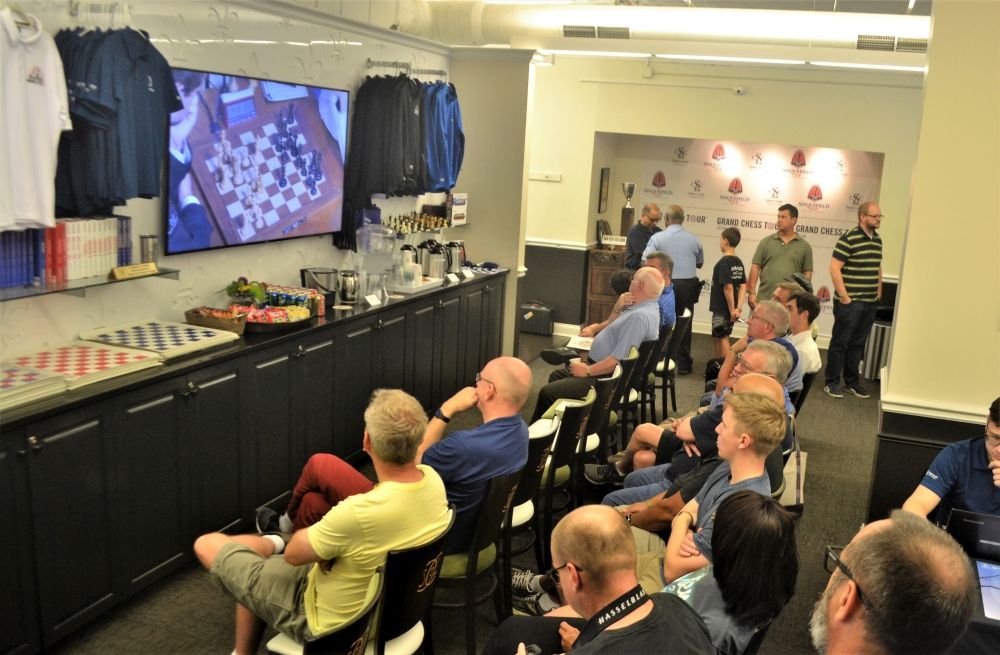 Then you go up the stairs to the tournament hall and then it hits you even more! Entry to the hall was restricted for about half an hour to allow only the press, and a good heap of sports channels have descended on the hall - Sports Illustrated, ESPN, HBO... 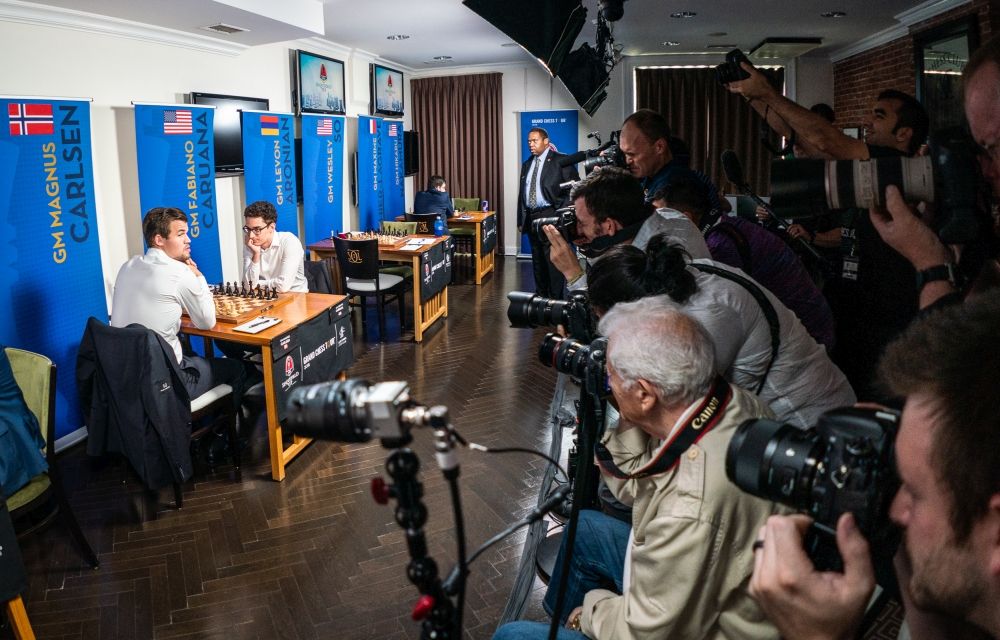 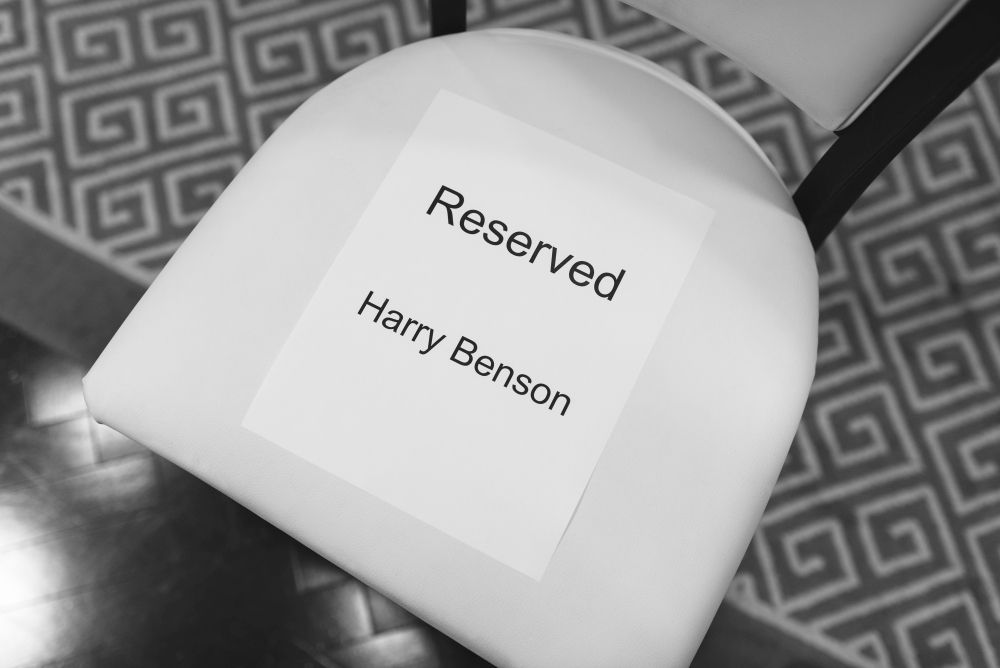 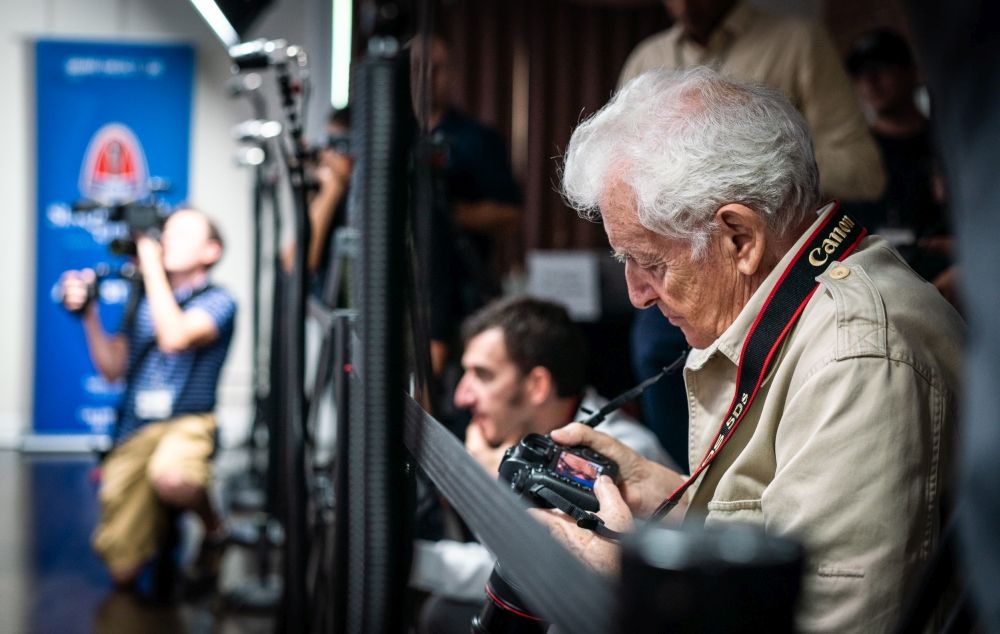 Then you realise - this encounter has attracted even acclaimed legends of photographers to Saint Louis! | Photo – Saint Louis Chess Club /Lennart

And then you spot Harry Benson himself! The iconic photographer with an endearing connection to our game, with his unforgettable portraits of Bobby Fischer. Is he getting ready for the next American World Chess Champion?

Scenario inside the tournament hall just after the start of the games, with only media allowed access | Video - V.Saravanan 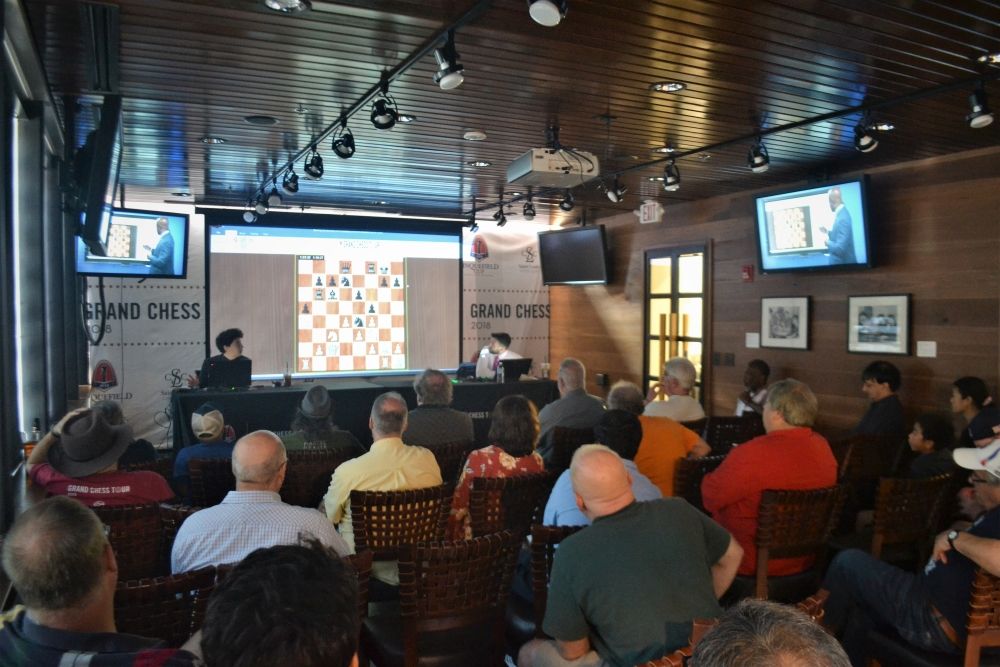 Onsite Commentary room with Grandmasters Alejandro Ramirez and Cristian Chirila is even fuller than their regular fullness | Photo – V.Saravanan

Amid all the hype, the game got on. Carlsen showed his class early on: 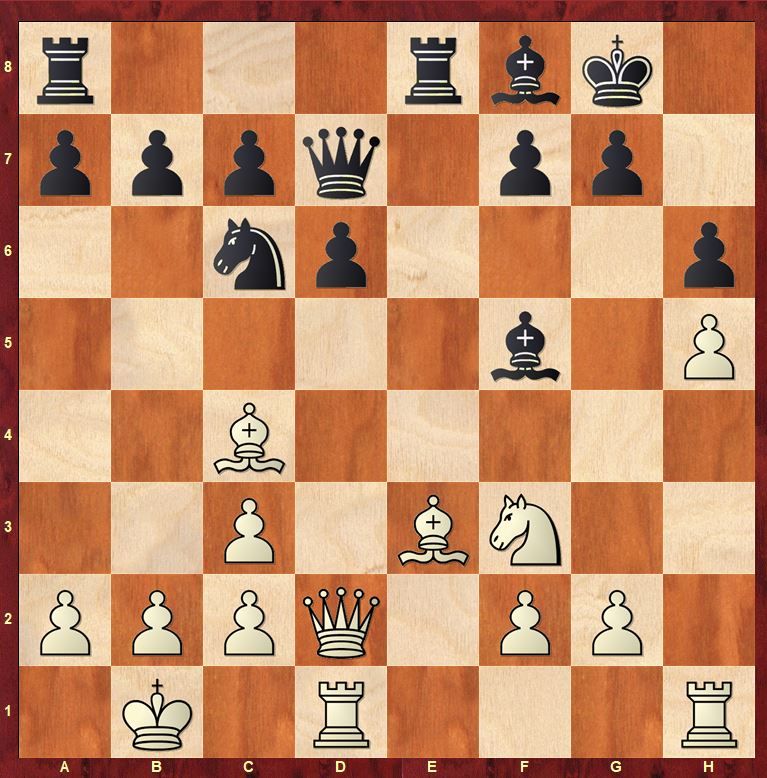 14.Be2!? Subtle play. Carlsen reasons that, at c4 the Bishop is misplaced, open to be attacked with ...Nc6-e5. Hence, he retreats the bishop before planning the advance of the g-pawn. Remarkable. Carlsen simply excels in identifying such deep resources. Only a thorough analysis of the position will reveal the soundness of his idea, but apparently Caruana panicked… 14...Bg4?! 15.Nh2 Bxe2 16.Qxe2 Ne5 [Black is getting ready for ...Qd7-c6 & ...Ne5-c4] 17.Bc1! [Now white is ready to roll his kingside pawns] 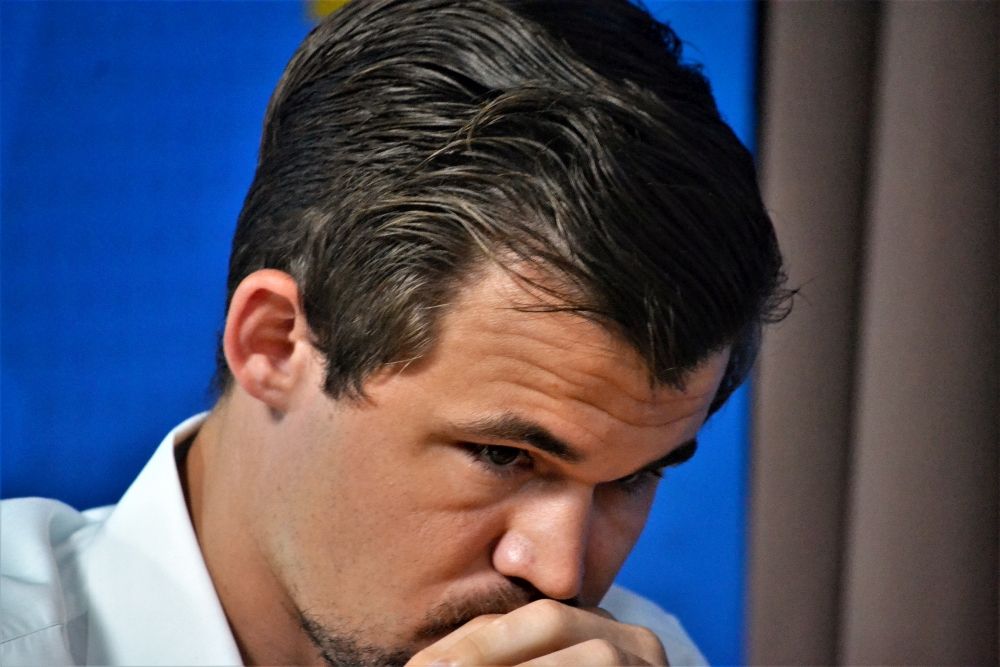 Carlsen gave a determined demonstration over the board | Photo – V.Saravanan 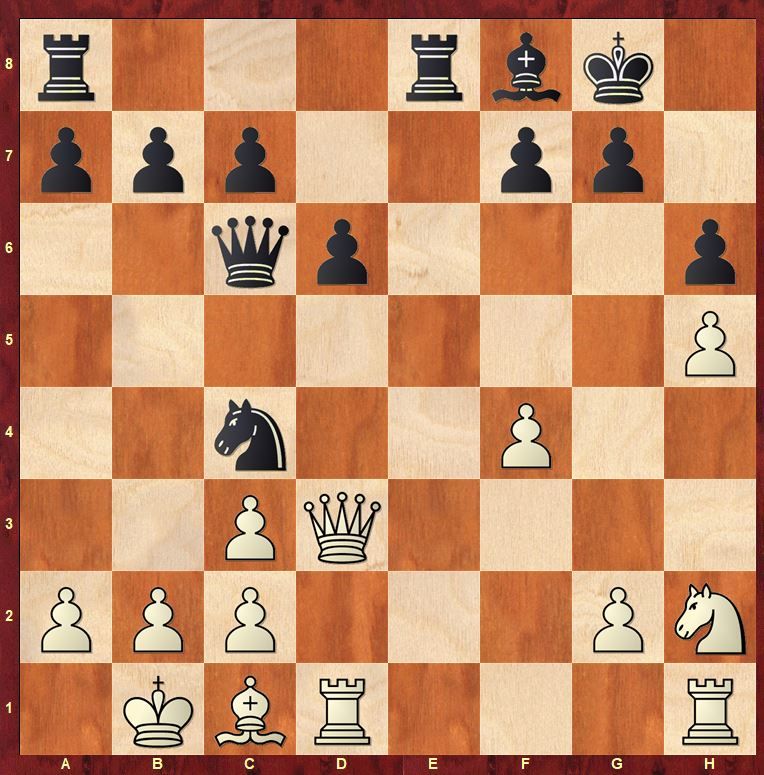 19...Qe4 [Hoping that a Queenswap will halt white’s attack on the kingside] 20.g4 Ne3 21.Rde1 Qxd3 22.cxd3 Nd5 23.Reg1 and white’s initiative cannot be underestimated. After indifferent play by Caruana, Carlsen was soon on his way to score a win, it looked... 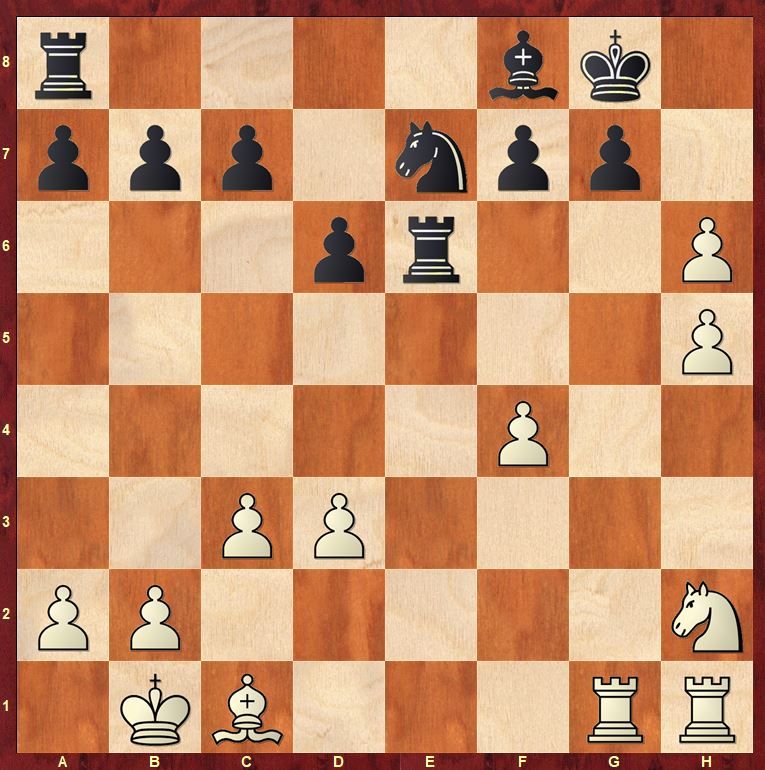 With his position apparently overwhelming, Magnus went to the confession booth here, and did an epic act - check it out yourself! 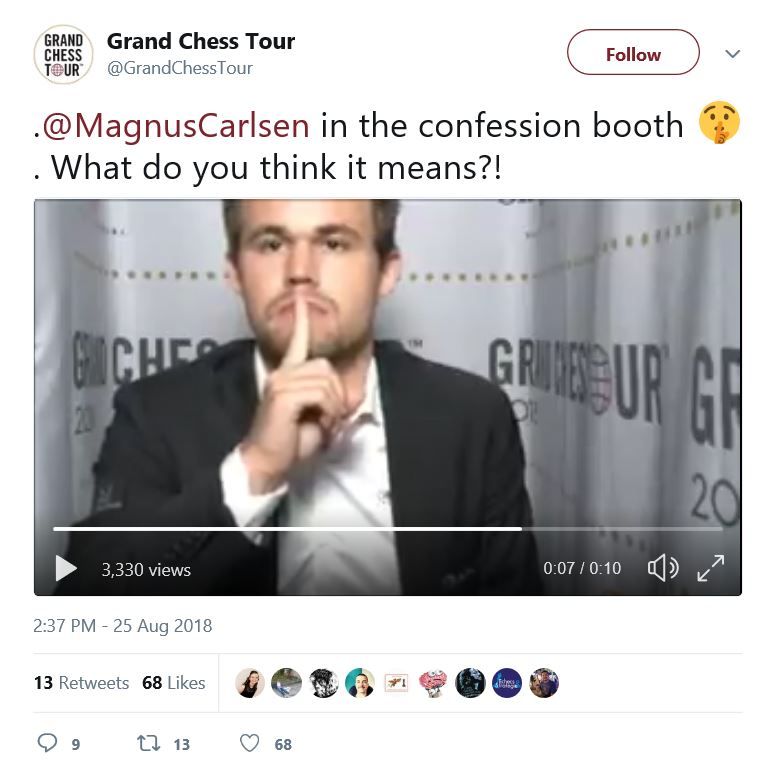 [Though this might remain an embarassment for Carlsen, we have to give it to him for showing a sense of fun and gamesmanship during the game. We need more competitors like him, don’t we?] 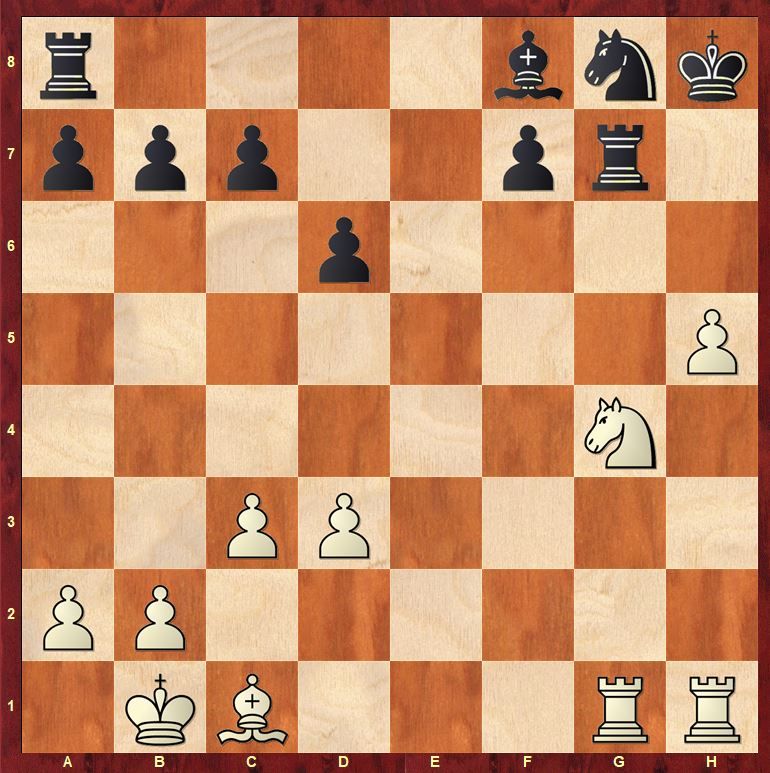 But we have to credit Caruana too - in a difficult position, the challenger played quickly and played the best defense to hold the draw. 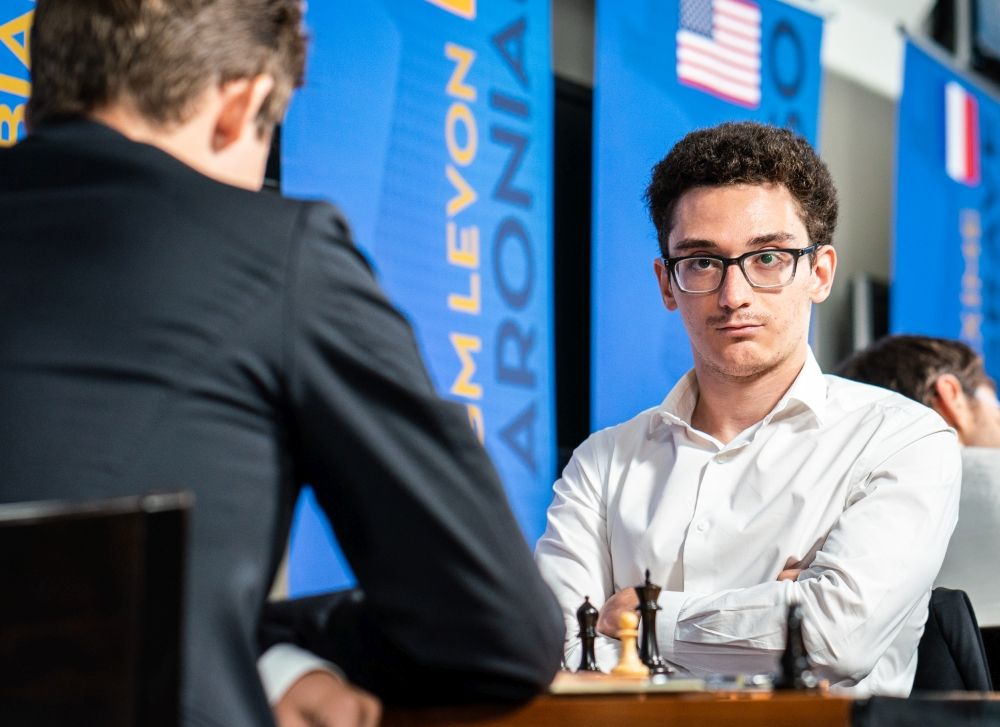 When the time came to repeat the moves and settle for a draw, the world champion was obviously distressed: 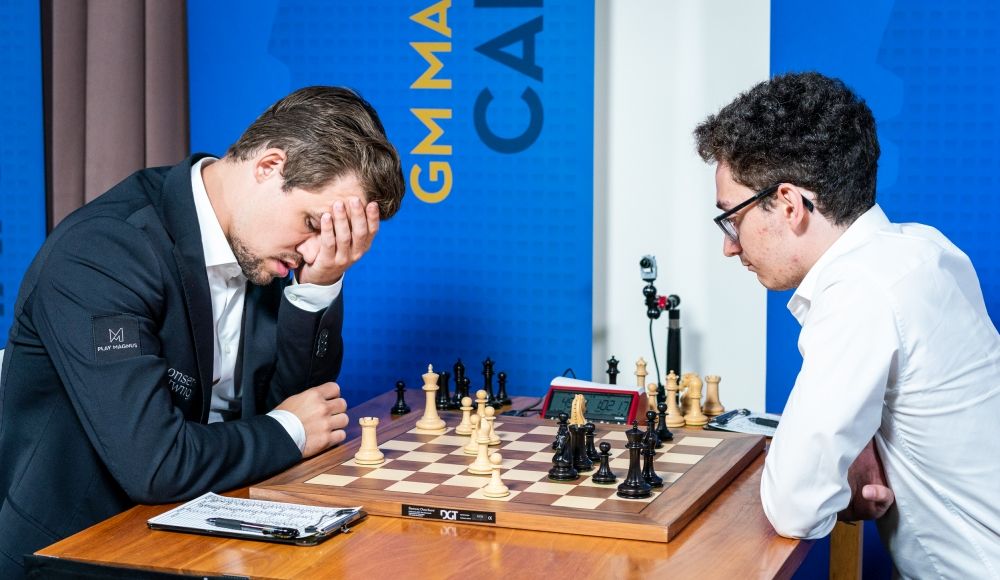 Uncharacteristically, he was very critical of himself in the aftergame chat: “In all of my games I am not being practical. I kind of follow my intuition to make decisions. It’s frustrating for sure....particularly today was not a good day. Draw with Fabi is not a disaster and I couldn’t calculate. Obviously there was a lot at stake today, obviously (I) was a bit nervous”. Remarkable words from the guy who is estimated to become an all-time great ever!

Reminded about his Confession Booth mischief, Carlsen chuckled, "That kind of backfired, eh? At that point I was pretty sure I was winning. I just wanted to have some fun. But it didn't work out”...

The commentary team had the mischief to play the Confession clip to Caruana too, just after the game, and Caruana gave a big grin,”I guess he thought it was already over. But it wasn’t!” and he gave a large grin too!!

There was nothing much happening in the other games, as fatigue is overtaking all these players who are nearing the end of the second tournament in succession. Only, Vachier tried to be nicely creative: 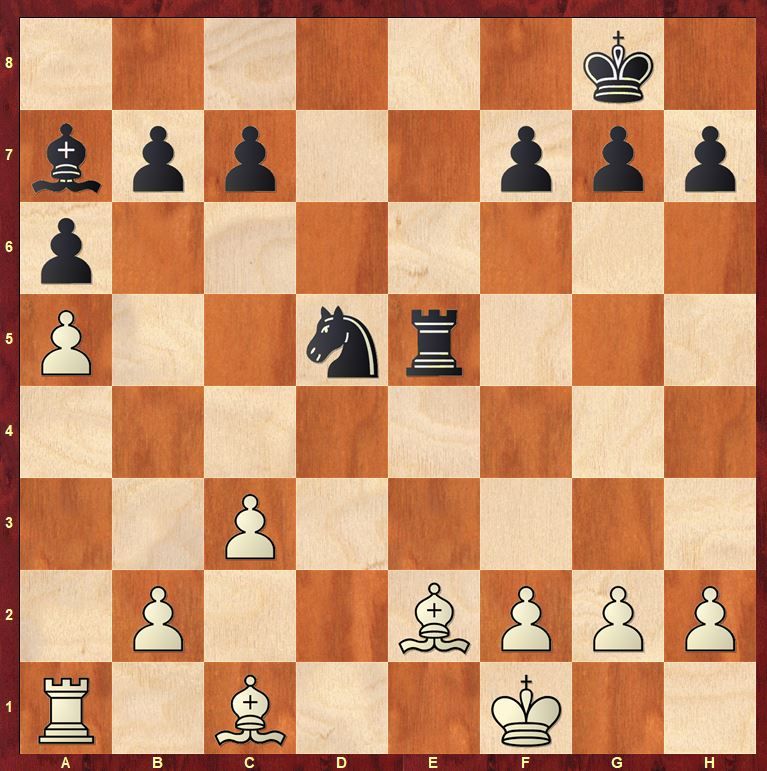 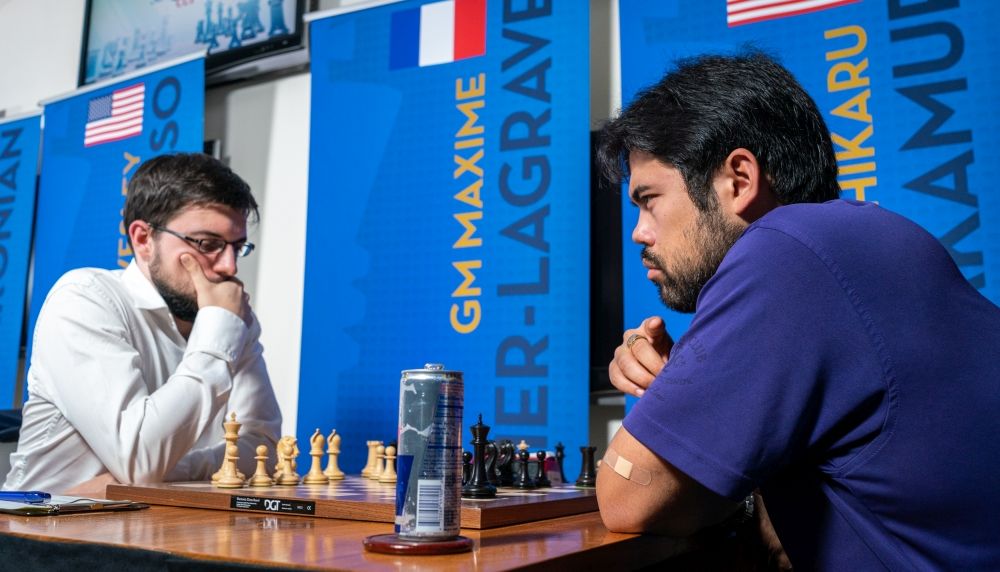 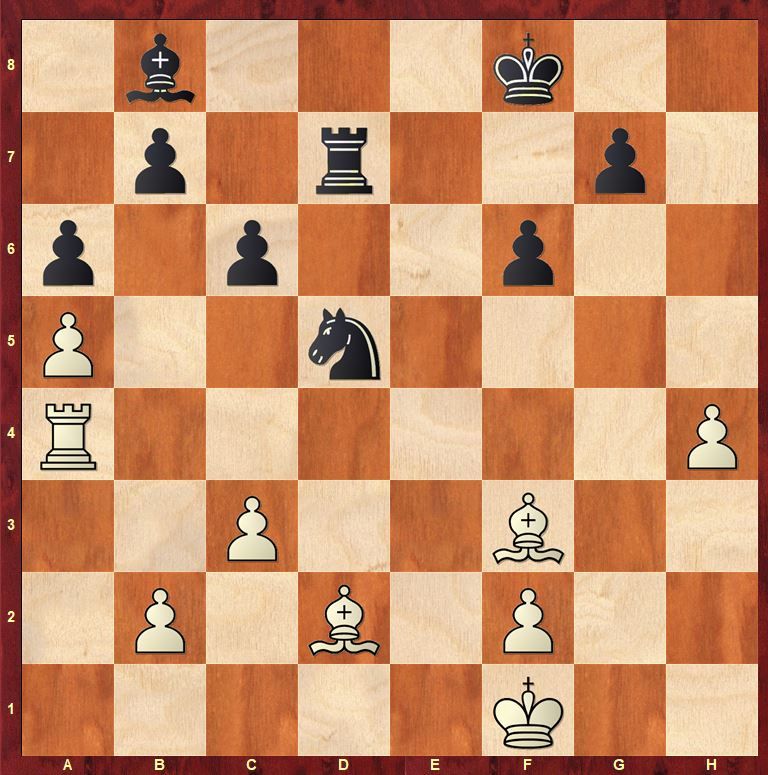 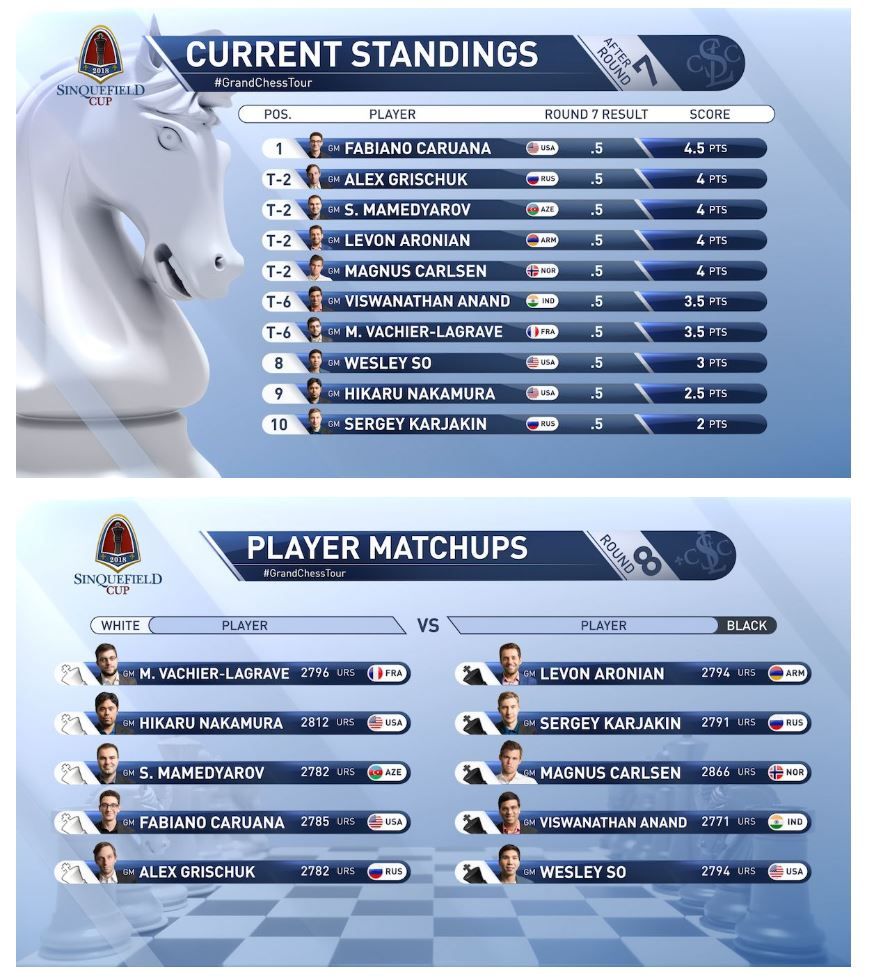