The last round of the Sinquefield Cup was one of the tensest in recent memory. Aronian, Caruana, Mamedyarov, Wesley So, Grischuk, Vachier-Lagrave, Karjakin were all fighting to make the top 4 to get into the Grand Chess Tour final. Carlsen was fighting for the title. Nakamura wasn’t fighting for anything but he was scheduled to play Carlsen with black! Find out below in the excellent report of IM V. Saravanan what happened in the last round of the Sinquefield Cup 2018 and game annotations of Anand-Mamedyarov by Tanmay Srinath.

Pressure is the word associated closely with modern chess. The ability to create and withstand pressure is what defines the class of any player, even the best in the world. But it is easier said than done to keep your emotions intact and withstand pressure indefinitely. That is why you see mistakes even at the topmost levels of chess, which keeps chess fresh and creative, even in the modern era of ridiculously deep opening preparation. We urge you to keep this in mind when studying games from this round!

The tournament hall at the beginning of the tense last round

The first game to get up and running instantly was Aronian - Grischuk. The moment Old Indian Defence appeared on the board, it was obvious that Grischuk had desperate ideas in his mind. Only, since he had a 42 minute think for his 10th move, after which it was just a question of when he was going to get into time pressure... 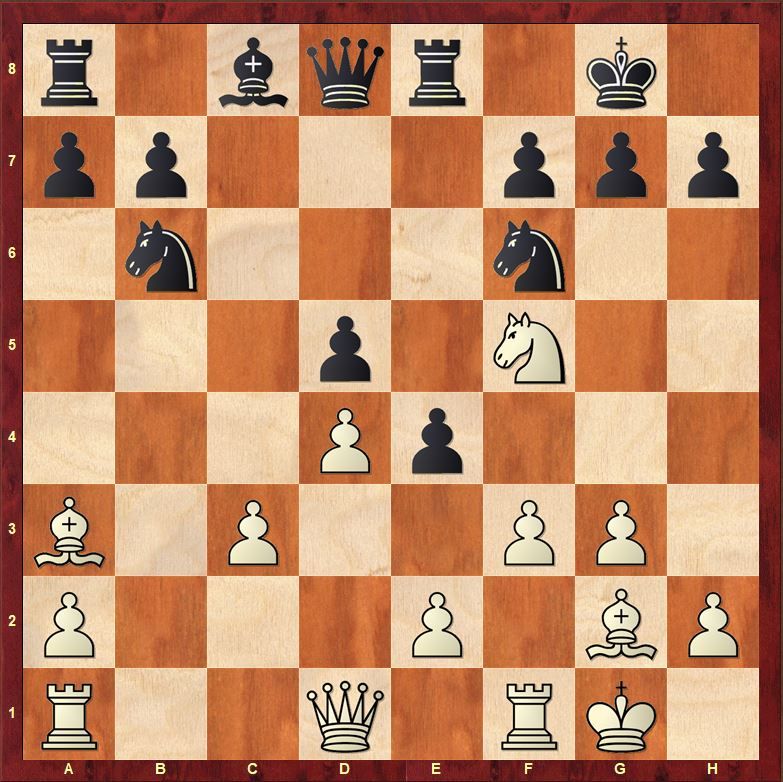 What to make of this position?! Making sense of the game by looking at general factors as pawn structures, piece placement, king safety etc. have gone out of the window long ago. It is next to impossible to understand this position unless it is thoroughly analysed. 14.Nd6 Nc4!? [All our marks to Grischuk for playing so boldly (desperately?) from the word go] 15.Nxc4 [15.Nxe8 Qxe8 16.Bc1 e3! and black has compensation] 15...dxc4 16.fxe4 Nxe4 17.Qc2 Qd5 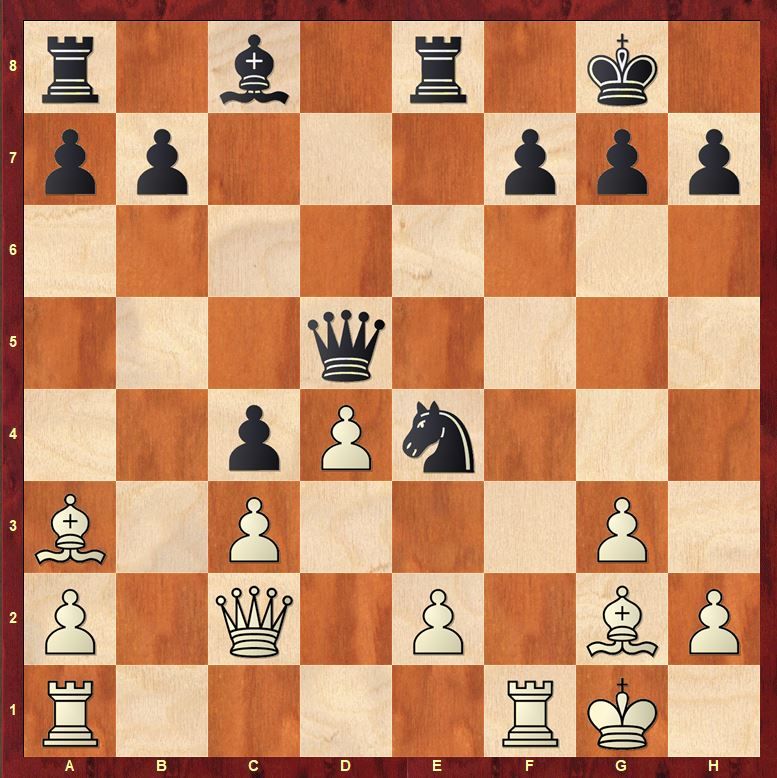 [Once he won the game, Aronian joked, “Now it is easy to call myself a hero!” Aronian’s strategy before the game was to play a normal game, with the mental makeup that it was okay if the game would end in a draw. After all, Grischuk was more desperate than Aronian to win this game, to have any chance of finishing in the top 4 in GCT placings.

He also understood that this was a very risky decision, but he ‘also remembered the champagne part’! Claiming that he got too excited and sacrificed on f7, he also factored in that Grischuk had only 9 minutes left to the time control at this point itself. 18.Rf4 would continue the balance, but he made the sacrifice believing he saw enough play for white, but he had missed a detail] 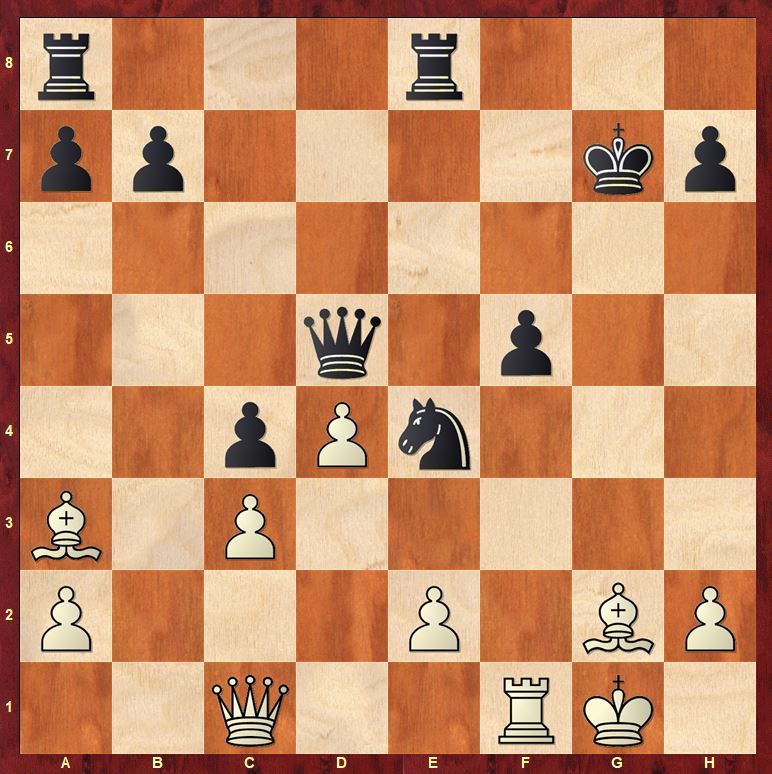 Have a look at the position without the use of a chess engine, and you will understand that Aronian’s boldness had a logic. It is next to impossible to defend this position with black pieces in practical play, especially when you have less than 10 minutes in your clock. 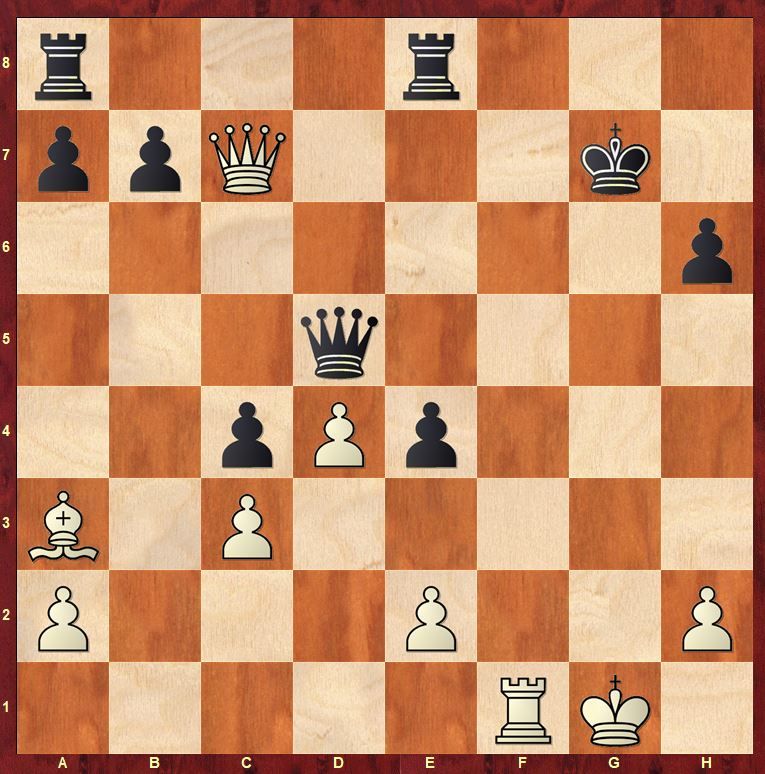 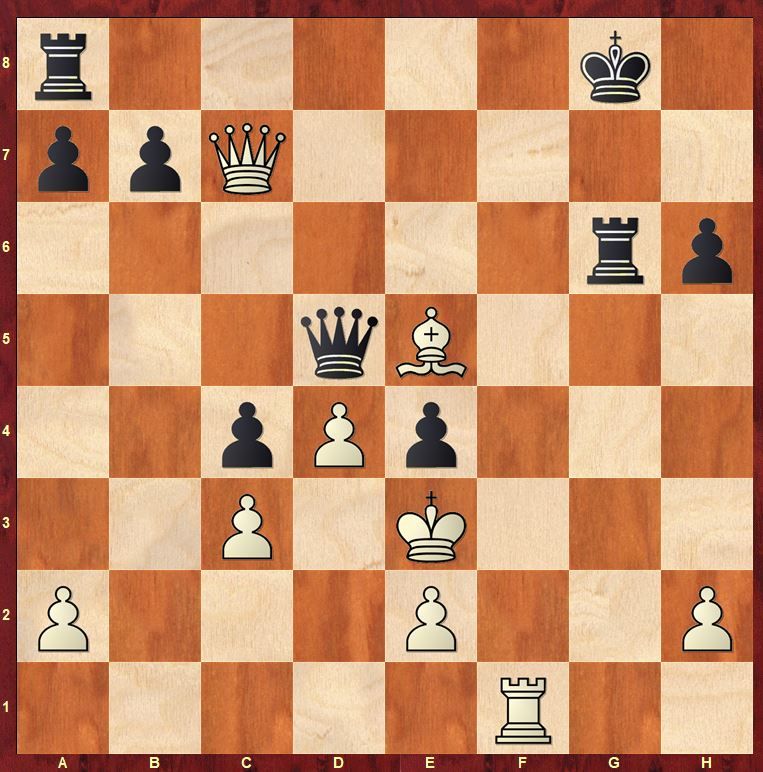 Triumph of white’s strategy. It is not everyday that one’s king gets as cosy as at a square like e3 in middlegame! Now that Grischuk was into his last couple of minutes, by now it was a question of when a blunder would occur rather than if… 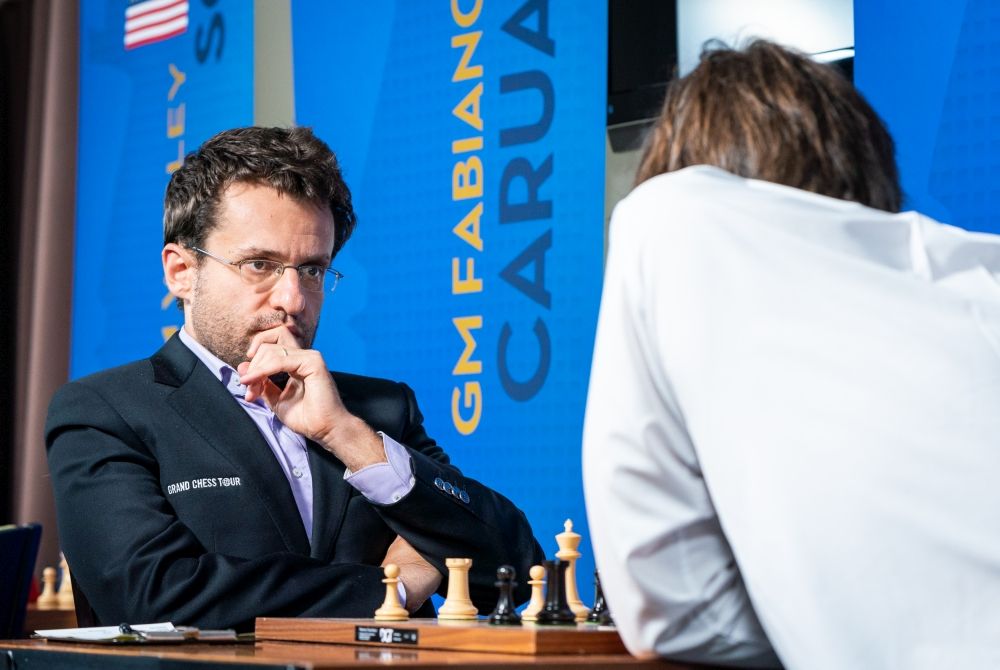 Chatting with Chessbase after the game, Aronian admitted that he had not anticipated the opponent’s opening choice for this game. ‘But I was sure that he will play an opening which he has never played before!’

Was it his intention to make this game a tactical battle? ‘Yes, I can play tactical. I am strong in playing in dynamic positions also, but I did not have any pre-game plan to make the game tactical today. I just wanted to play a game with pressure, and keep playing’. 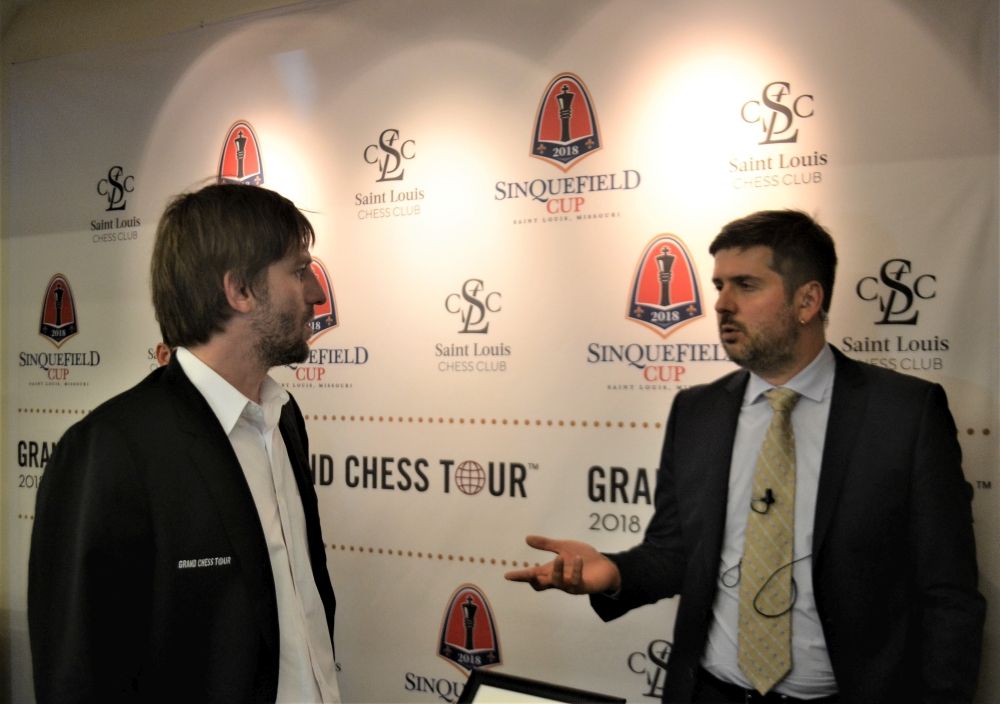 Grischuk in conversation with Peter Svidler just after the end of the last round | Photo – V.Saravanan

And of course, someone else was watching all this too! 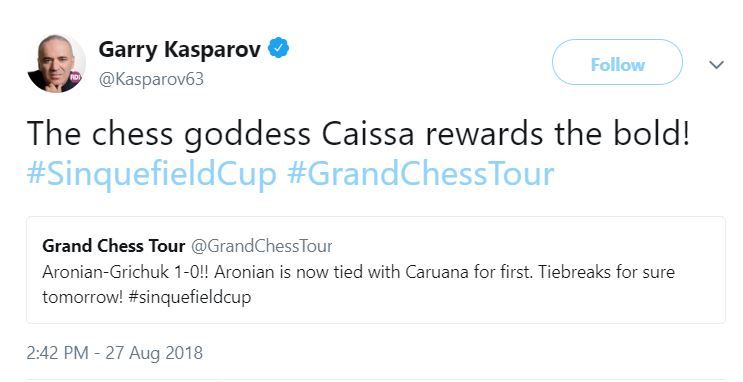 The other superhuman effort of this round came from the world champion. Carlsen had to win the final round game to hopefully catch up with Caruana, and the opening stage looked encouraging for him too: 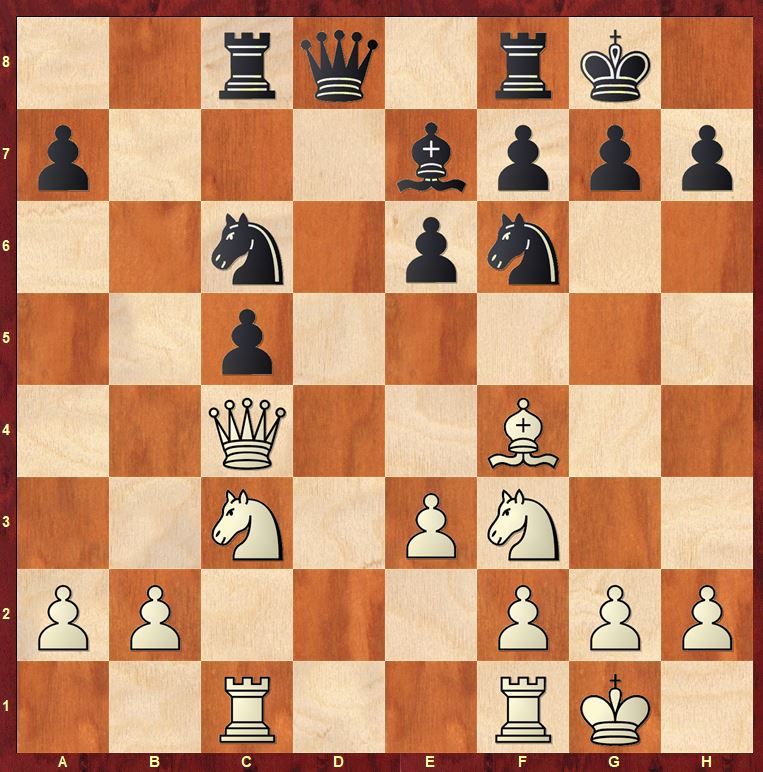 This was not an ideal opening to choose against the world champion, with fixed structural weaknesses bereft of dynamics. But probably one cannot control your opening positions so much… The game moved on and reached a critical position: 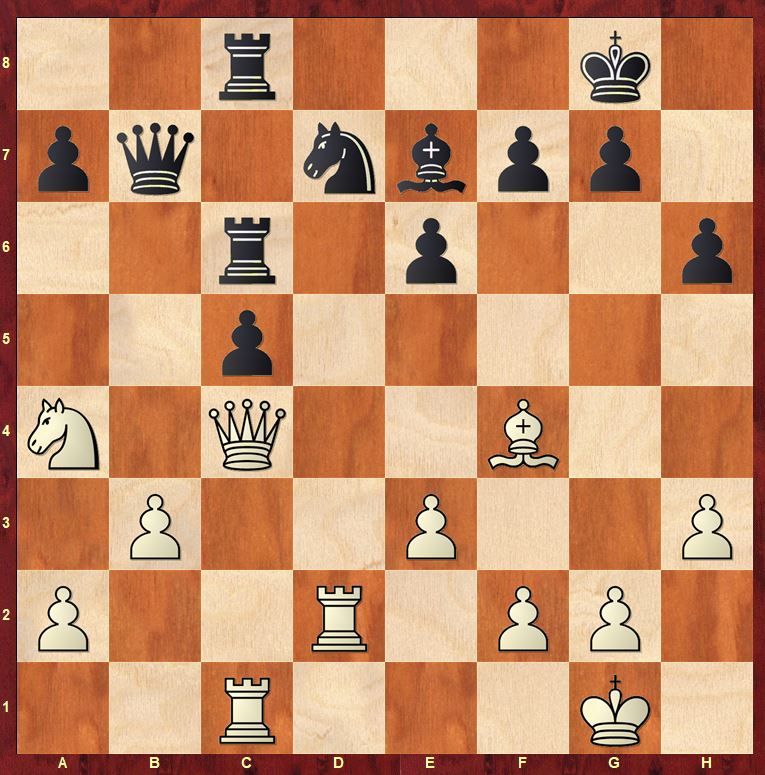 White is ready to double his rooks on the d-file, and you can feel the heat on black. That probably explains Hikaru’s choice here: 20...Nb6?!

Biggest artificial reliever of pressure is exchanging pieces or executing tactics. The former is the probable reason for Hikaru’s choice here. Definitely, he very well knows that ‘chop, chop, chop… is never a draw!’ But it is not easy to keep your nerves under check in the last round of a major event, facing this particular guy across the board.

The point is, even after the exchange of a strong c4-knight, white increases his advantage because of his complete control of the d-file here. Even though both the sides did not play the best moves further on, there was no question from here on that Carlsen was pressing, something which he does quite well: 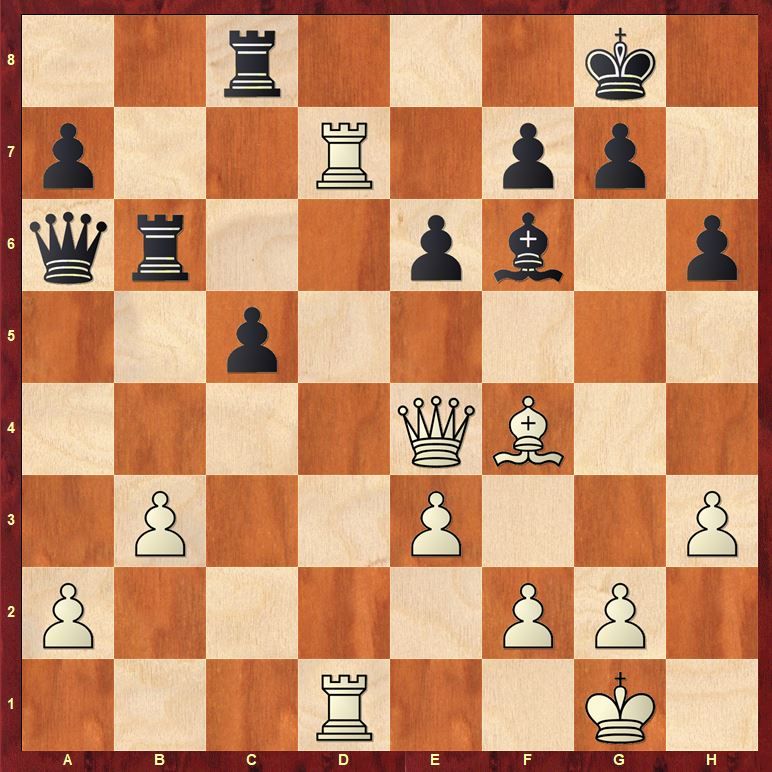 Somewhere along the way, Carlsen squandered his slight advantage and the game reached the following position: 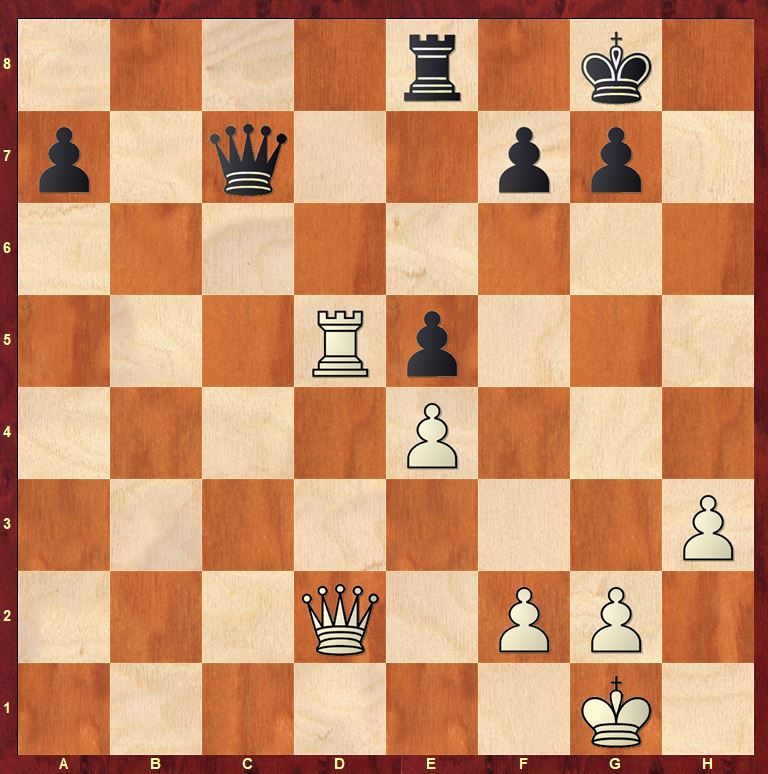 From here on, Carlsen maneuvered for another 20 moves back and forth. Standing in the lobby and watching the game, it was not difficult to get bored. But it was obvious that Nakamura was going under tremendous pressure, as he could not afford to let his vigil slip even for a moment. But I still couldn’t help asking Polish Grandmaster Grzdorg Gajewski, Anand’s second. “Does Carlsen really possess anything here to press for a win?” Gajewski answered, “That’s the point - Carlsen has scored so many times without possessing anything!” 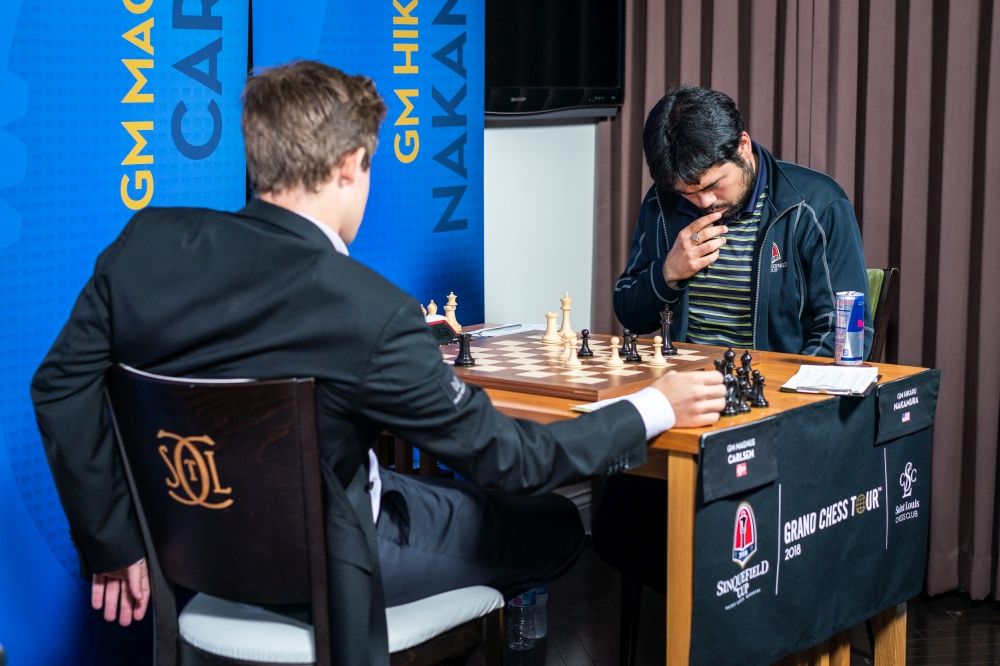 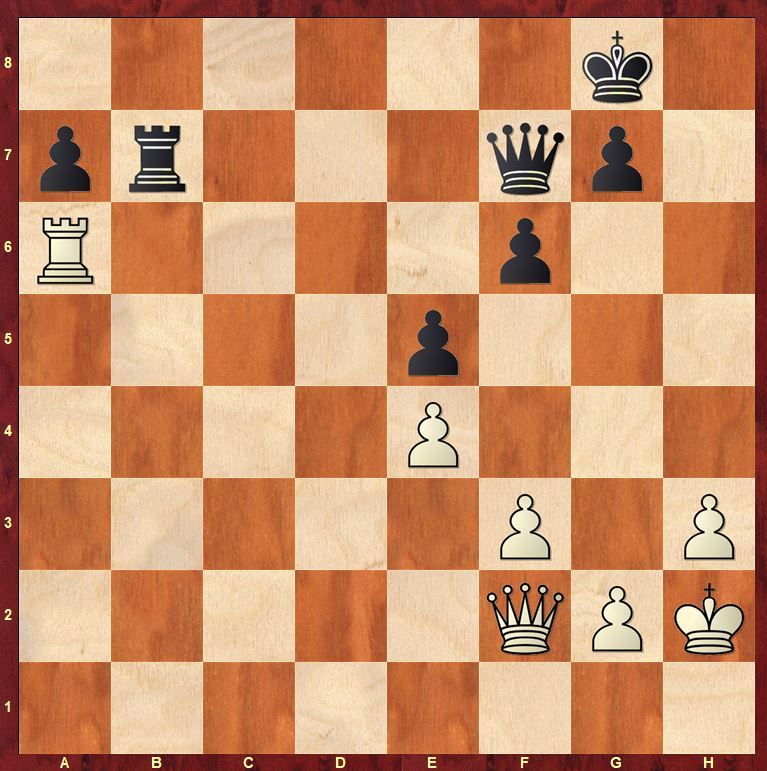 Carlsen finally decided to act here with 56.Qa2 Qxa2 57.Rxa2 and he emerged into the rook ending with a slight advantage. He remarked he felt ‘a little bit more optimistic’ here. 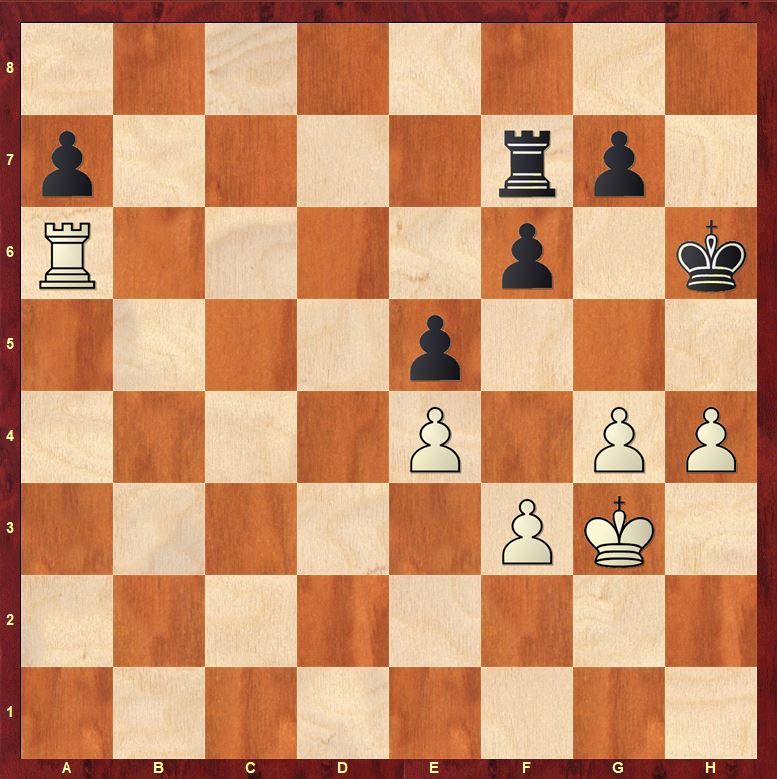 ‘He had so many defensive plans to choose from, and all of them should actually work. But he started to see some dangers, and eventually started to panic’ said Carlsen. 62...g5? A shocker! We will never really understand why Nakamura decided to commit hara-kiri here. 63.h5 and white has a permanent trump card here on the kingside. 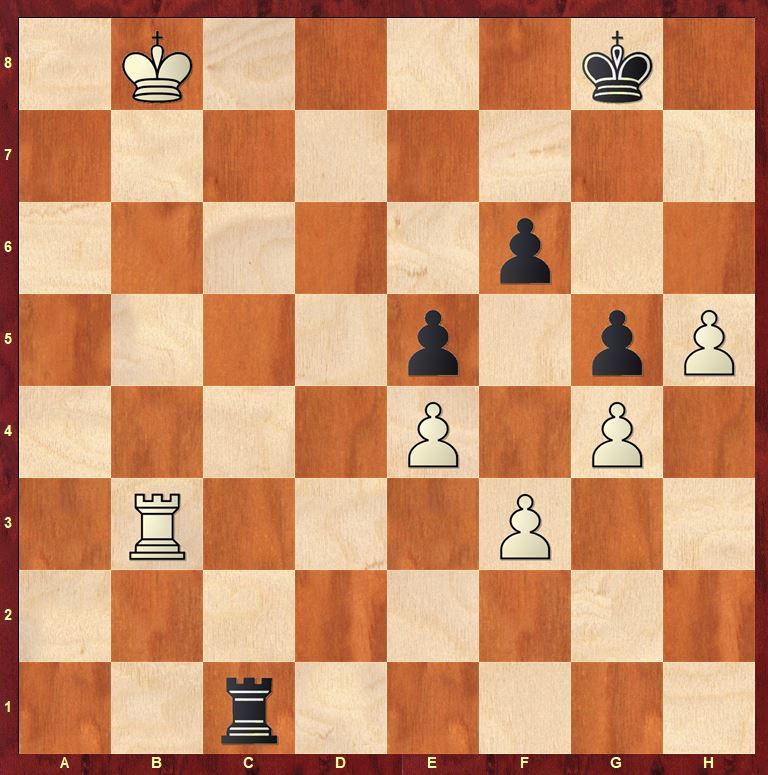 Strangely, the final manoeuvre of walking up the king is a familiar one which has appeared in a few games already, most notable being Gajewski - Vachier-Lagrave, Reykjavik 2013.

Without any doubt, Carlsen ‘felt great, as it made the difference between a mediocre tournament to a good one’.

Carlsen remarked, “It is extremely tough to grind out wins with these guys, so I am happy that I finished with +2”. Grinding out a win from one of these guys is what you just did, dude!

The sharp line employed in Anand - Mamedyarov was the first game to raise the bar in the last round shootout. Both the players are not strangers to this line, having even played each other the very same variation at the Tal Memorial Blitz 2016. Only, over the board, Shakh’s body language was much more confident, while Anand looked a tad nervous. 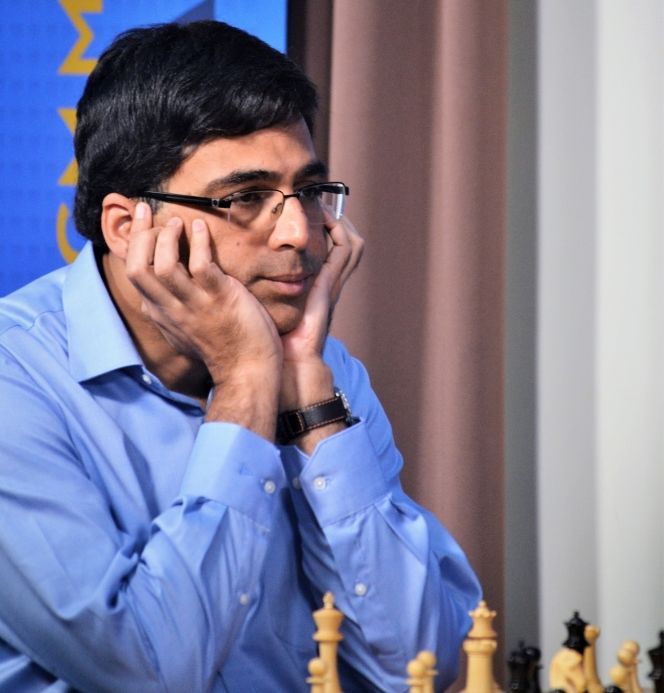 With so much at stake - qualification to London, even winning the Sinquefield Cup - Shakh admirably entered a sharp line of the Open Spanish for this crucial last round encounter. At some point, the position on the board looked messy and scary, till one powered on the database: 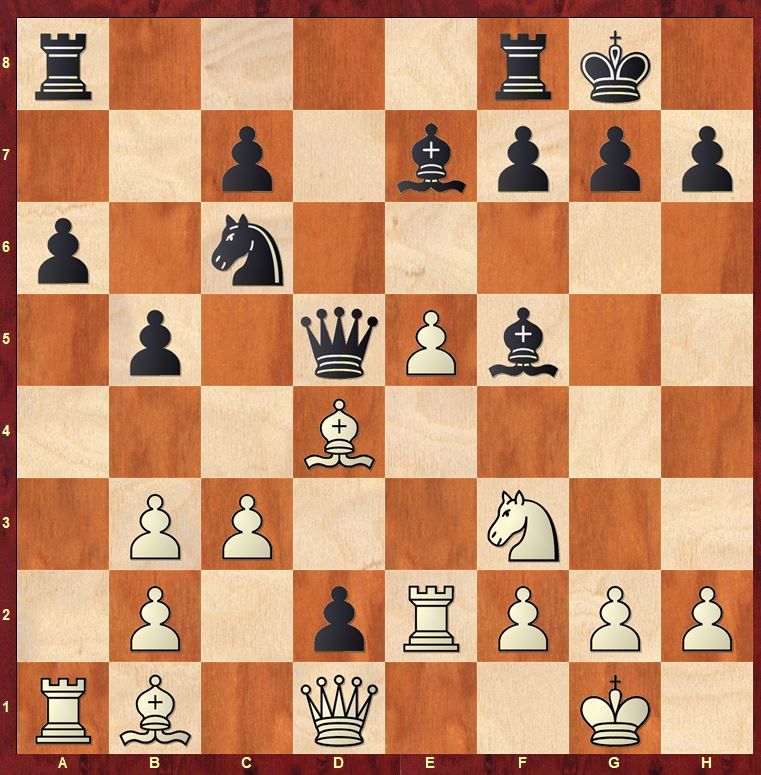 Vishy’s model of opening preparation discussed yesterday showed it’s hand here. Both the players continued blitzing off moves, and it was obvious that both came to the board definitely anticipating this variation. But Vishy seemed to be armed with his usual opening deep pocket: 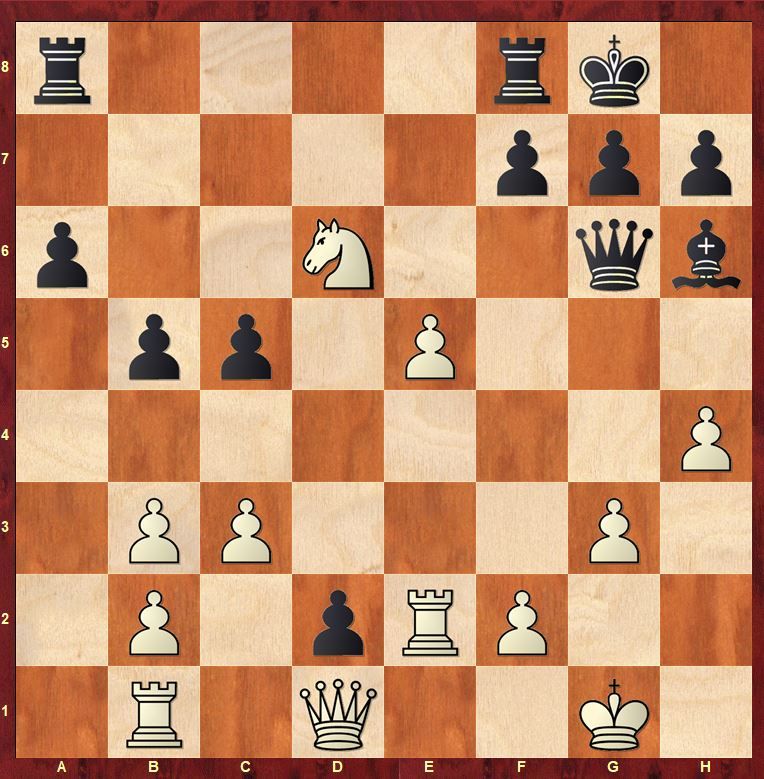 25.h5 Novelty. And as is common with modern chess opening preparation, this move has already been employed in correspondence games. 25...Qxh5 26.Rxd2 Qxe5 27.Rd5 Qf6 and white achieved a slight advantage here. But, from here on, Anand and Mamedyarov played near perfect chess, and there was almost no point where play could have been improved for both sides, maintaining near equilibrium all the way.

Gajewski was full of admiration for the near-perfect play by both the players, “Black was under pressure for a long time, and he (Mamedyarov) did defend quite well. This is a very high-quality game”. 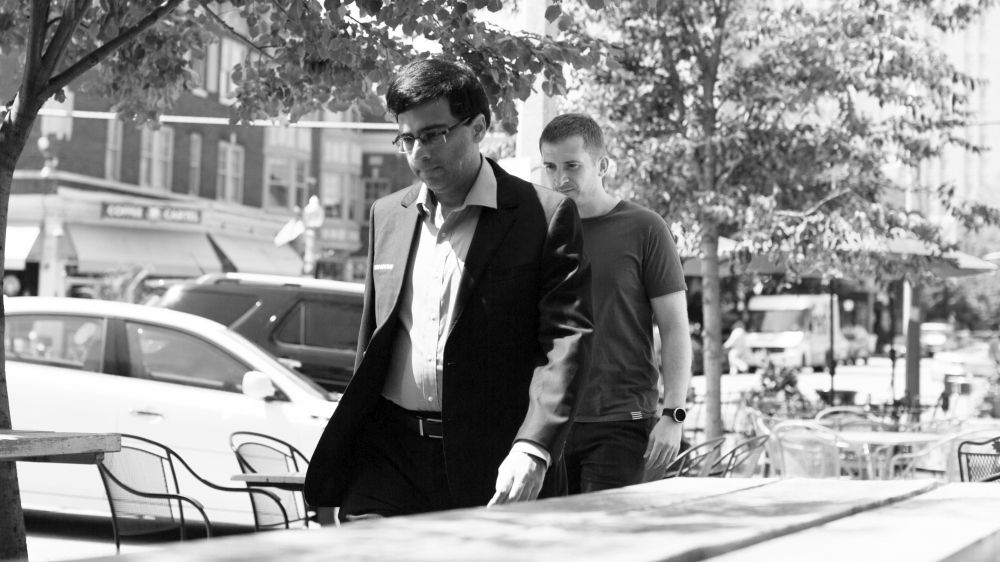 The following game was another example of two (probably) fatigued players in a long encounter with lots of twists and turns. But Vachier missed what looked to be a decisive advantage: 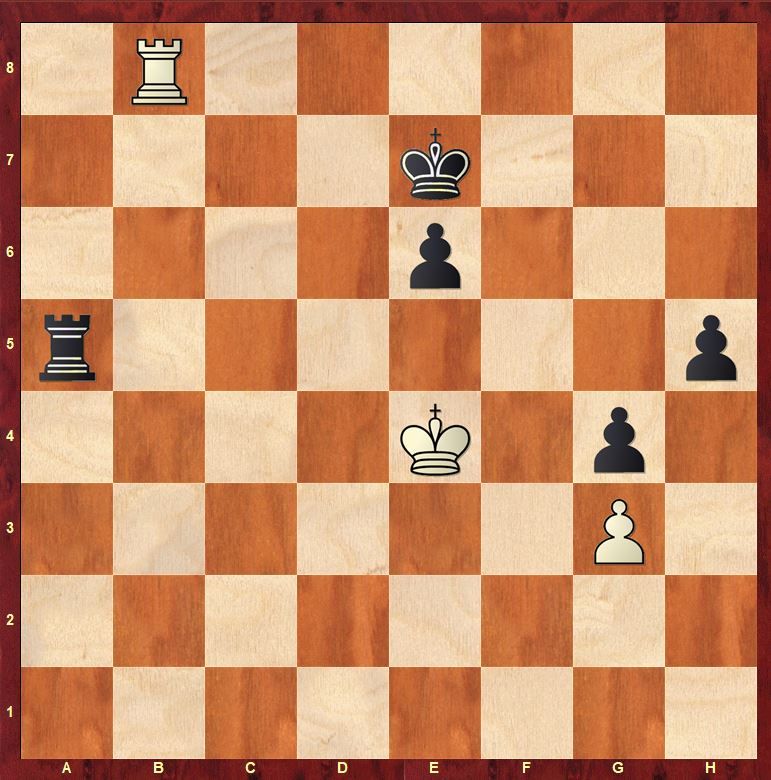 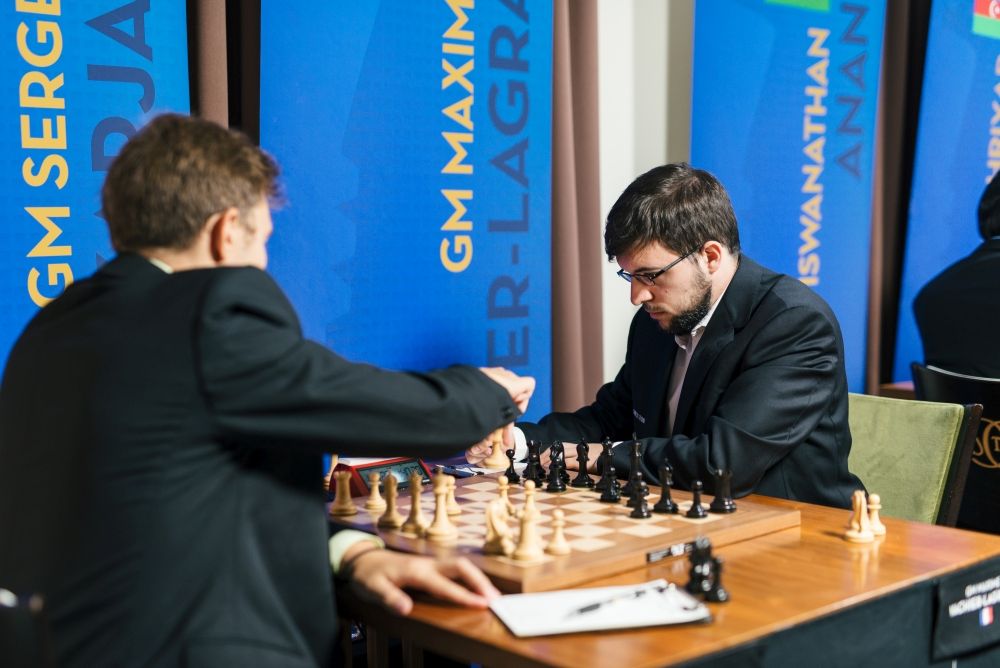 In an unexpected twist after the end of the last round, Carlsen, Aronian and Caruana reached a compromise to share the title of the Sinquefield Cup equally between them, instead of tiebreak match as per original rules.

Grand Chess Tour stipulates a tie-break match to decide the winner of an individual event in case of players scoring equal points and tying for the first place. Since three players tied for first in this tournament, the standard tiebreak methods applied showed equal score for all three players, which meant that one of the players were to be eliminated by a drawing of lots for the other two to qualify for the tiebreak match. This was objected by Carlsen who suggested an all-play-all play-off between all three of them to decide the champion, but this was not agreeable to Aronian and Caruana. Hence, they came to the compromise that they may be declared as joint champions of the event.

We cannot comment on the wish of the players or the organisers. The lingering questions are:

1. Why were the rules framed without anticipating such a finish to any tournament?

2. Why is it that no one thought of the fact that, among three (or four) deserving top finishers, it is cruel to remove one (or two) by lots letting the other two play the final?

3. Will this compromise been affected regardless of who finished at the top of the table? 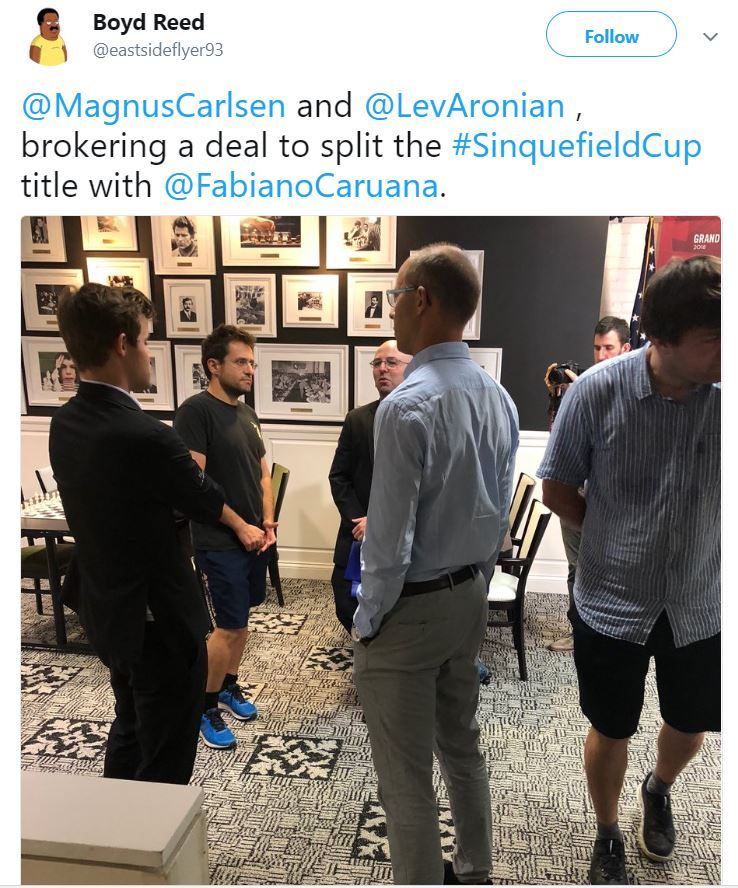 The compromise being worked out... 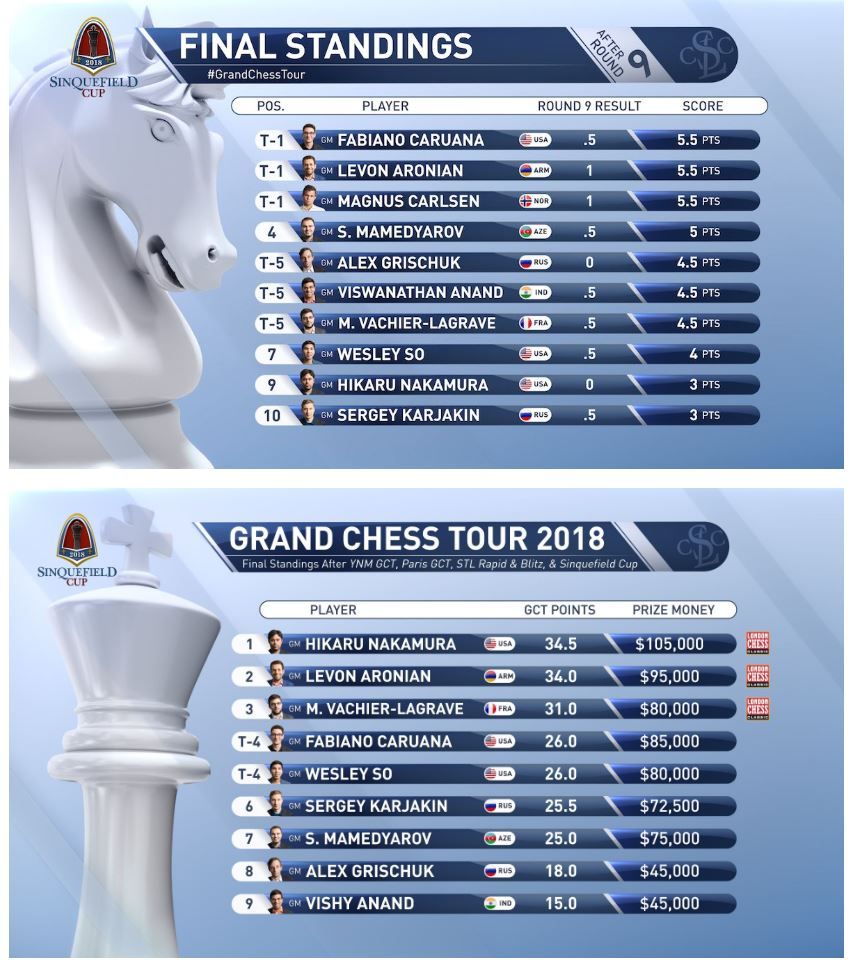