A visit to the World Championships in London + Game 9 analysis

The World Championship is the biggest spectacle that is out there in the chess world as on today. Very few people are fortunate enough to visit the venue of the tournament in person. Most of us have to follow the Championship online. So how does it feel to watch the match between two of the best chess players in the world LIVE? 12-year-old Yuvraj Kumar visited the playing venue in London and sent us his impressions about the same. Also in this article is the analysis of game nine of the match. ChessBase India did a live show with GM S.P. Sethuraman explaining the intricacies of the game and you can follow them in this report.

Watching the World Championship in person

Thanks to my poor health today, I witnessed something immensely memorable in my life. Yes, bad health! I was not feeling well this morning and thus got a leave from going to my secondary school. Thankfully, my father was at home and he had no class to teach today at his university. Around 9 a.m, I started to feel better and we decided to go to London to watch the ninth game of World Championship Match between Carlsen and Caruana. 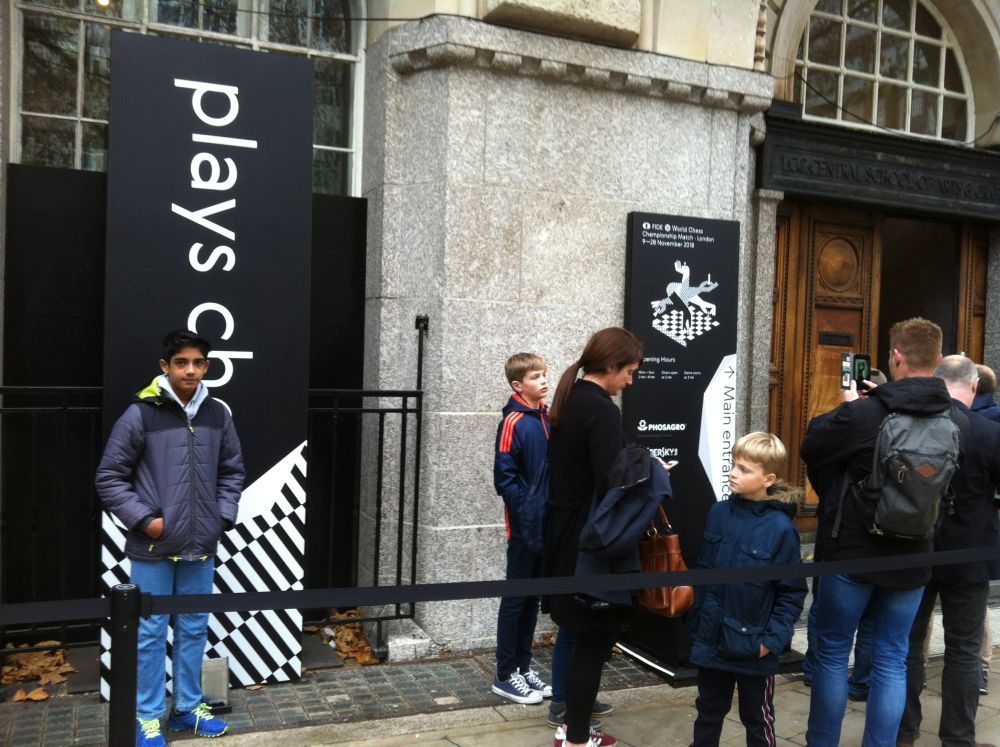 Waiting outside the college in Holborn

I was incredibly excited as until now, I had seen Magnus Carlsen and Fabiano Caruana only on a screen. We live in Bath—A UNESCO world heritage city (Only city of this fame in the whole country and one of the four cities in the entire world) which is about 90 minutes by train from London. By 12:30 pm we were in London and around 2 PM, we were at the venue. At 2:50 pm, we entered the main auditorium and waited patiently for the crunch moment when the two giants appeared amidst the melee of journalists. I must say that I was thoroughly disappointed to see the arrangements. 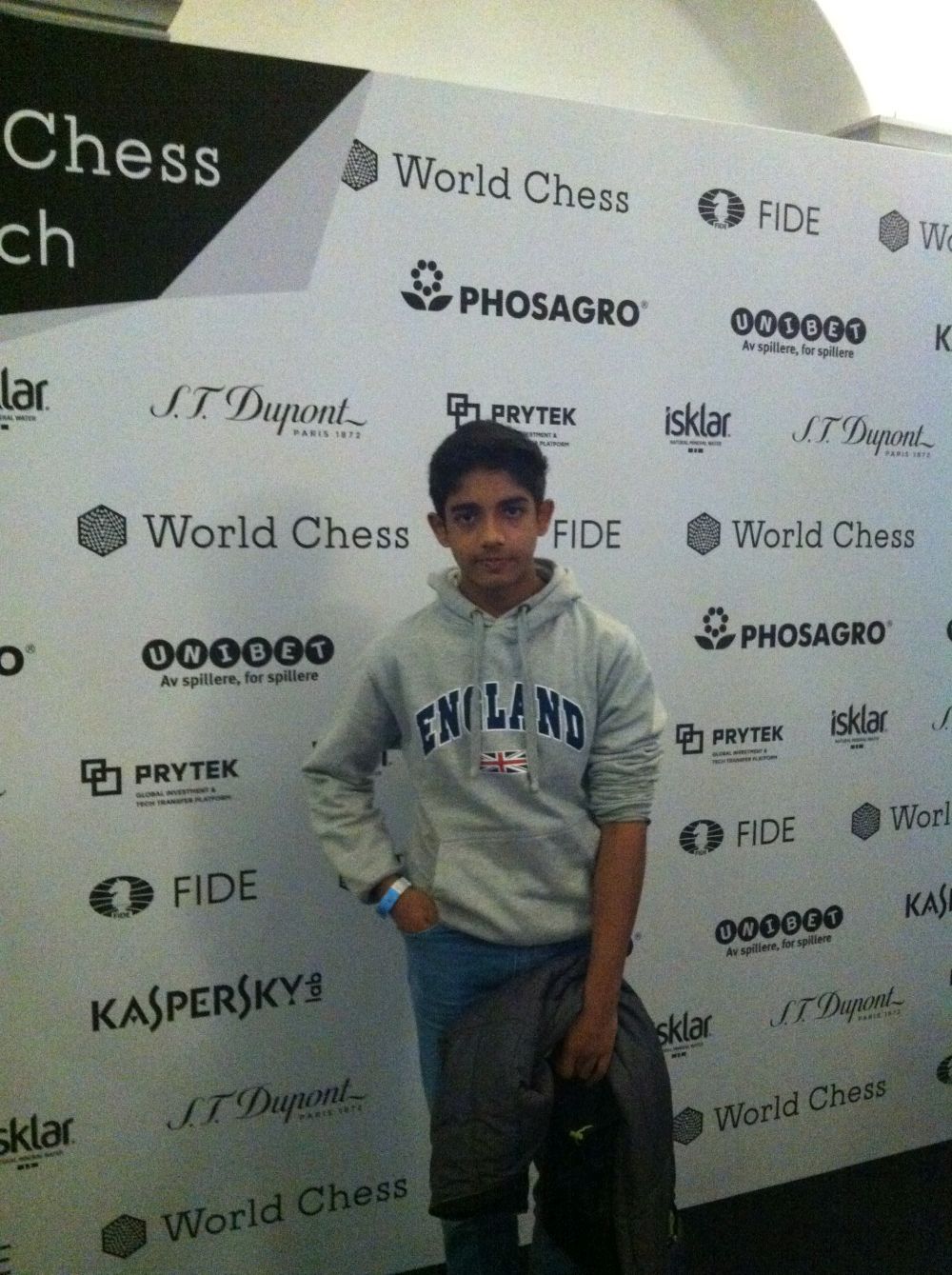 Not impressed by the arrangements!

Chess is not considered even a ‘mind-game’ in this country and the government does not extend an iota of support to this game. Not a single British kid gets any financial or moral support from the local or central government and despite these odds in the recent Chess Olympiad, England Men’s team fared better than several countries including India which is due to the spirit of culture of games and sports in this country. By any yard of measurement, England can rank in the top 8 strong chess nations on the earth and though it has not been able to produce a world champion yet, it did produce a player (Nigel Short) who played world championships against Kasparov in 1993. That championship was held in London 25 years ago and Kasparov had won 12.5 to 7.5 against Nigel.

I thought the auditorium was pretty small and a maximum of only 300 spectators were allowed in one go. The tickets for this tournament ranged from £70 to £400 (Rs. 38,000) which is incredibly costly, and a common person would be unable to pay such a large sum for witnessing one round of the match. There was no concession for the tickets for a child like me, neither was any concession for national players! Perhaps, the organisers should have arranged it in a much larger auditorium where spectators from all the corners could witness the game and players. The auditorium should have been big enough to accommodate 1,000 spectators at the least so that price of tickets could have been reasonable and chess as a game could have become more popular. 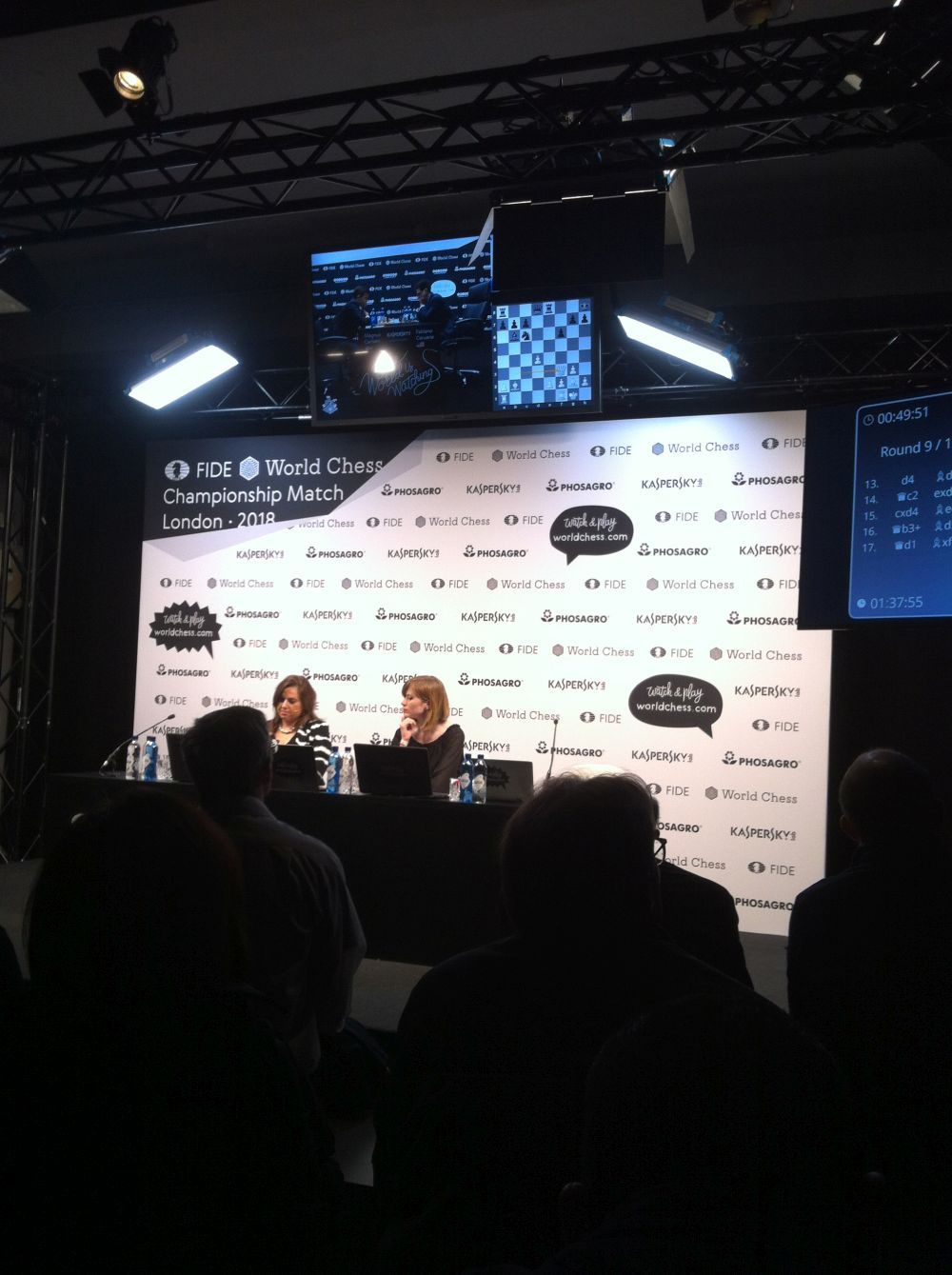 Apart from ‘Guardian’, there is not much coverage of Chess in the local print media and there is no report about this championship on the main television channels including BBC in the country. The commentary room where, Judit Polgar was commenting was also quite small. At the least that room could have been larger so that people could watch the live match through the LCD Televisions and hear the commentary at ease. Like the previous 8 rounds, this round also ended in a draw and during the press conference, I could see the frustration on the face of Magnus. He did admit that h5 was a mistake and perhaps, he should have played better during the middle game. I hope, the next 3 rounds end in decisive results for any player as I would not like that this championship is decided by rapid or blitz. 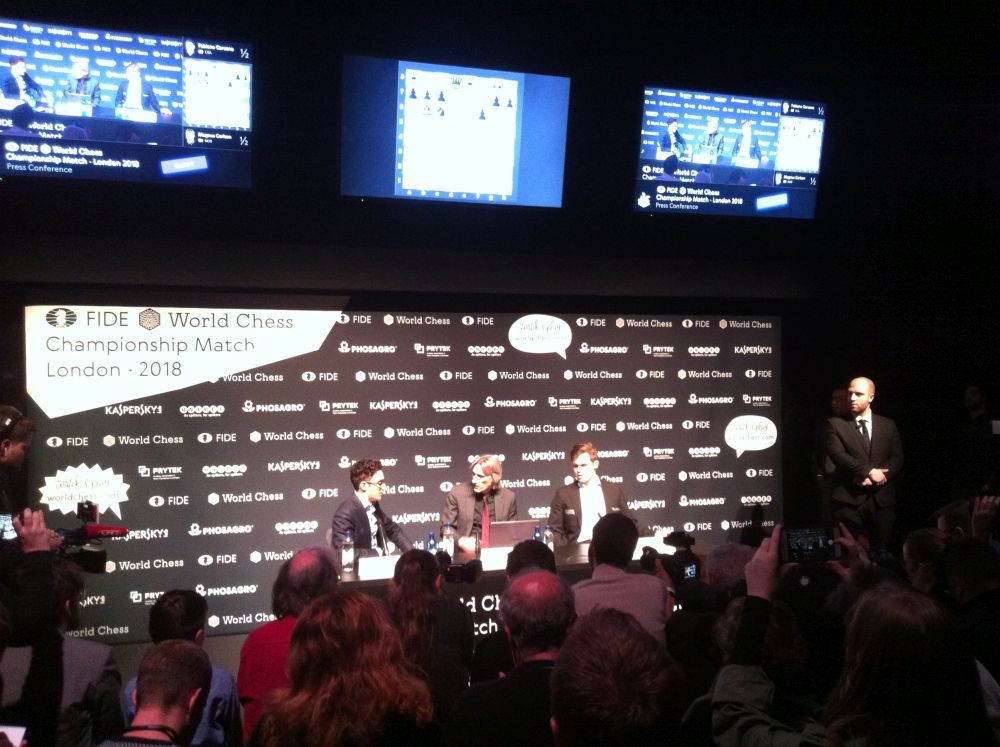 Caruana and Carlsen at the press conference

The general consensus among the GMs of India is that the match will go into a tiebreak. After 9 rounds it stands at 4.5-4.5 with 9 draws. But if it were to end in the classical time control, then it is Fabiano Caruana who has a better chance because Magnus just doesn't seem to be in his best form. In the ninth game of the match Carlsen had a clear advantage out of the opening. In fact this was the best position he had ever got with the white pieces in the match. People thought that this would be a long and tiring defensive task for the challenger, but Magnus lost his patience, something which he never really does, and the game ended in a draw. Let's have a look at how the events transpired. 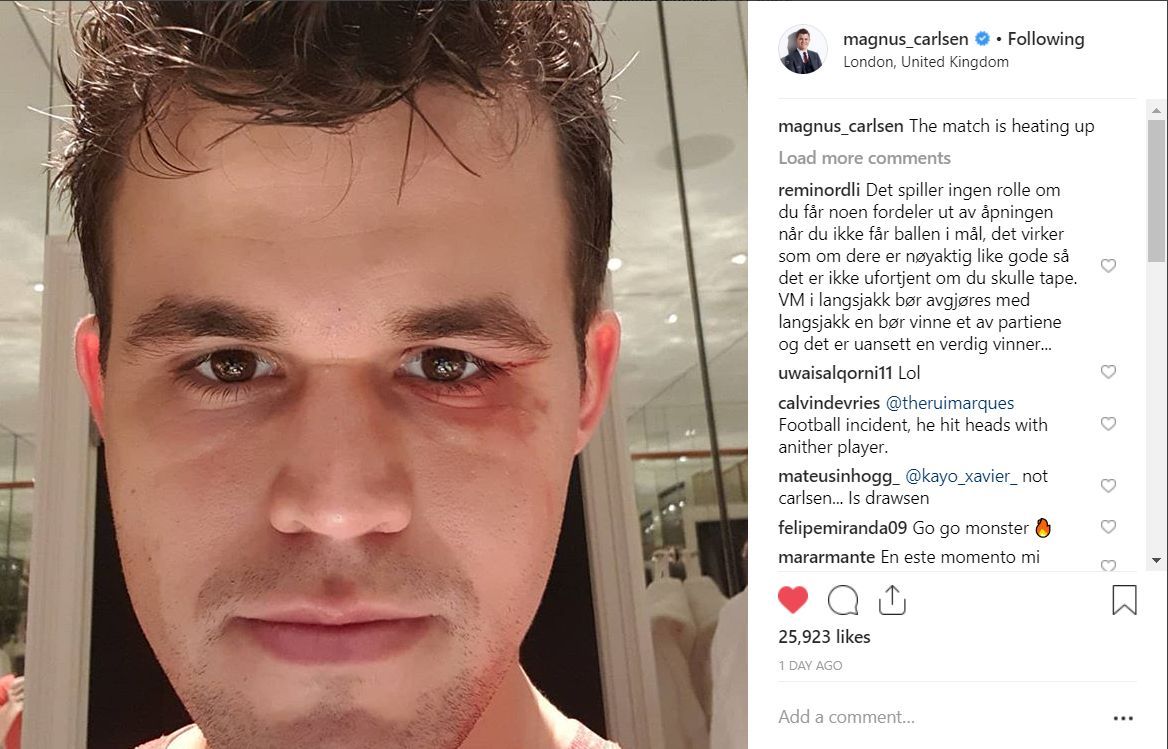 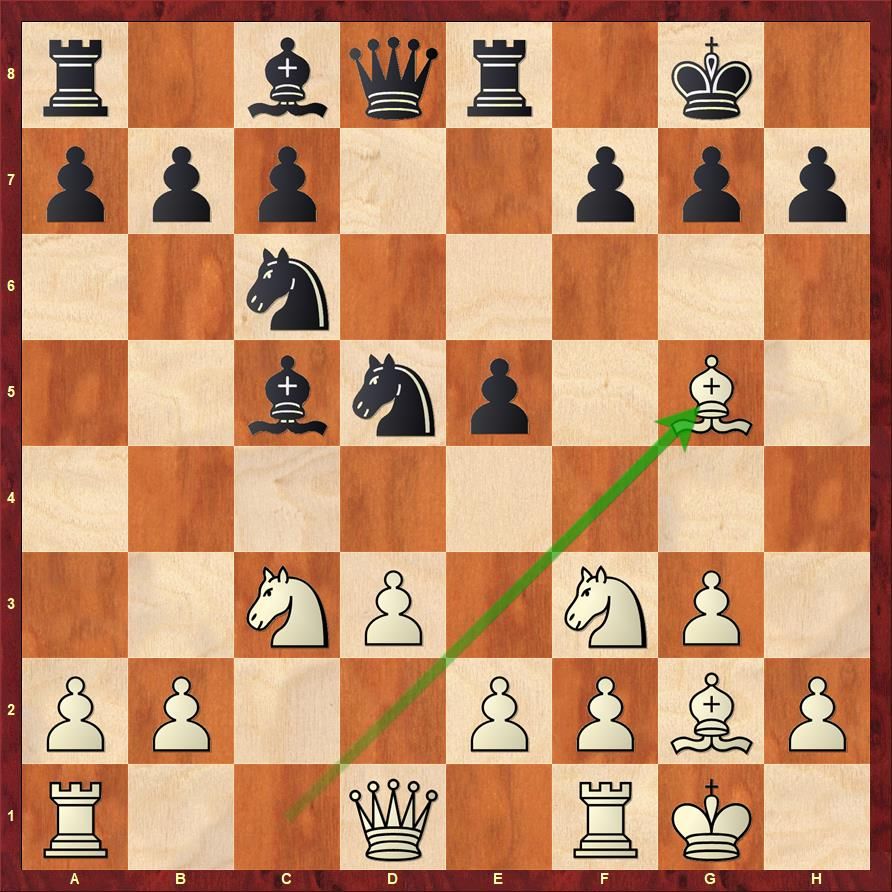 Bg5 was Magnus' innovation in the game. In game four of the match he had played Bd2. The main idea was not to play for an advantage, but to just get Fabiano out of theory. 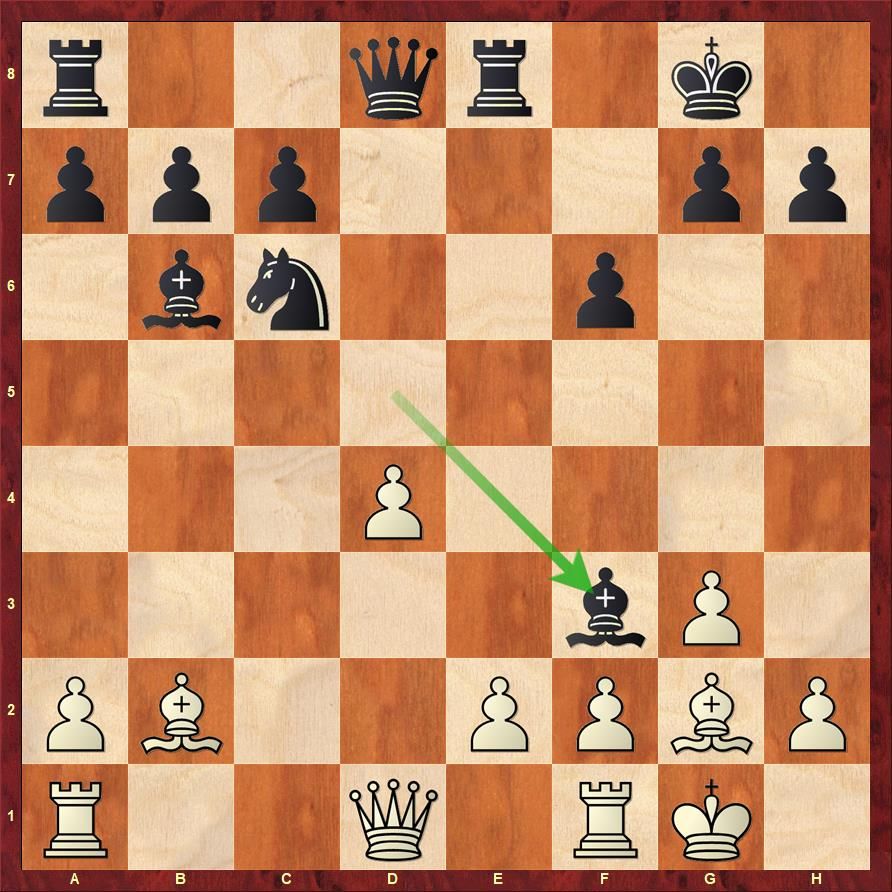 The position was round about even, but then Black took the knight on f3. This was an inexplicable decision by Fabiano because it let Magnus get a risk free edge 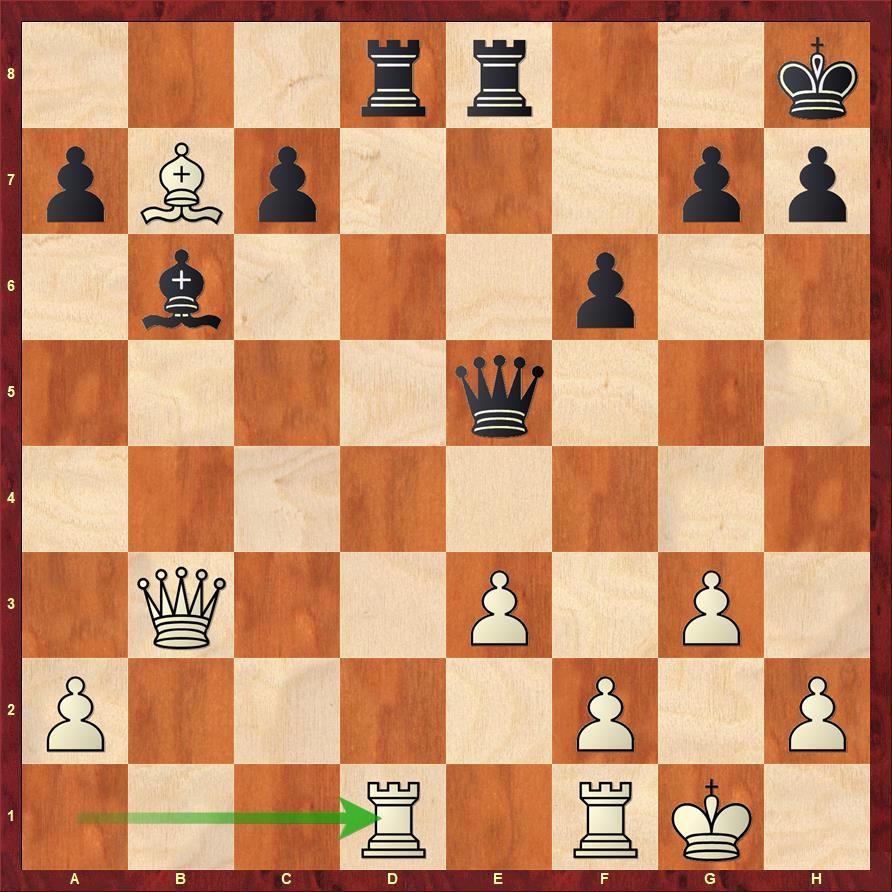 After all the exchanges on d4 we reach this position.

Now let's observe the position carefully. I was initially of the opinion that this is slightly better for White but should not be anything substantial. I was analyzing this game with GM Sethuraman and together when we began to analyze (I asking him questions, and he replying) I began to understand that White has really great chances. Now what made me change my opinion? Well, first of all the bishop on b6 is really bad. The pawn on e3 just kills the bishop on b6. On the other hand White's bishop on b7 is excellent. White has the opportunity to put pressure in the position with moves like h4 and a4. Black on the other hand has no real active plans. I think all of this put together feels like White has a great edge. 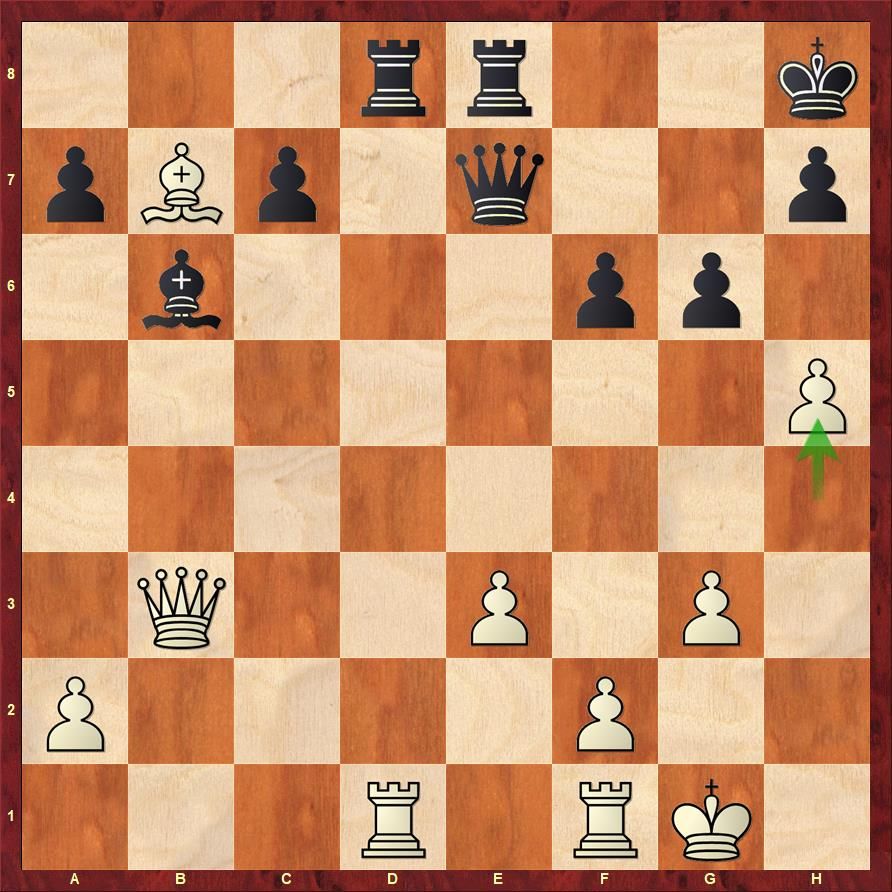 In this position, the move h5 by Magnus was just a bad one. He could have simply played Kg2 and put the pressure on. But he decided to force matters. Of course, Caruana simply picked up the pawn on h5, no matter how ugly it looked. His plan was simple. He wanted to play ...h4 and gain more counterplay. Magnus stopped Caruana's idea with Qc4. And in came the move ...f5! This is what Magnus missed. Now there is no way to stop the pawn coming to h4. Fabi executed the move h4 soon and the game petered out into a draw.
Analysis with GM Sethuraman
Game nine report by Daniel King
Analysis in Hindi by Niklesh Jain