Nobody deserved it more than Fabiano Caruana. He led right from the start at the Candidates 2018. He did have his hiccup in the twelfth round, losing to Karjakin, but he showed his mental toughness by beating Aronian in round 13 and Grischuk in the final round. With this he becomes the World Championship Challenger, the first American after Bobby Fischer in 1972. The match will be held in November 2018 in London. In this report we bring you all the updates that you need from Berlin with some excellent video reporting by Daniel King and team ChessBase.

A great round-up video by Daniel King for ChessBase

Fabiano Caruana was so close to becoming a challenger in 2016, but lost the last round to Sergey Karjakin. He had to wait two years, but he finally did deliver. Many of the people had Aronian as their favourite prior to the start of the Candidates 2018. Caruana is a great player but he lacks in him the quality to win an event like the Candidates, is what many said. Caruana maintained his lead right from the start until round 11. In round 12, he had a big accident in round against Karjakin. People started to feel that Karjakin would once again earn a rematch against Carlsen as the momentum was with the Russian. Many would have been depressed by this untimely loss, but Caruana said, "This loss made me play much more freely. Earlier I was tensed about my lead and how I must not lose it, and the loss in the twelfth round helped me to give my best in the 13th round." Caruana came back strongly and beat Levon Aronian in the penultimate round and Alexander Grischuk in the last round to win the Candidates 2018. 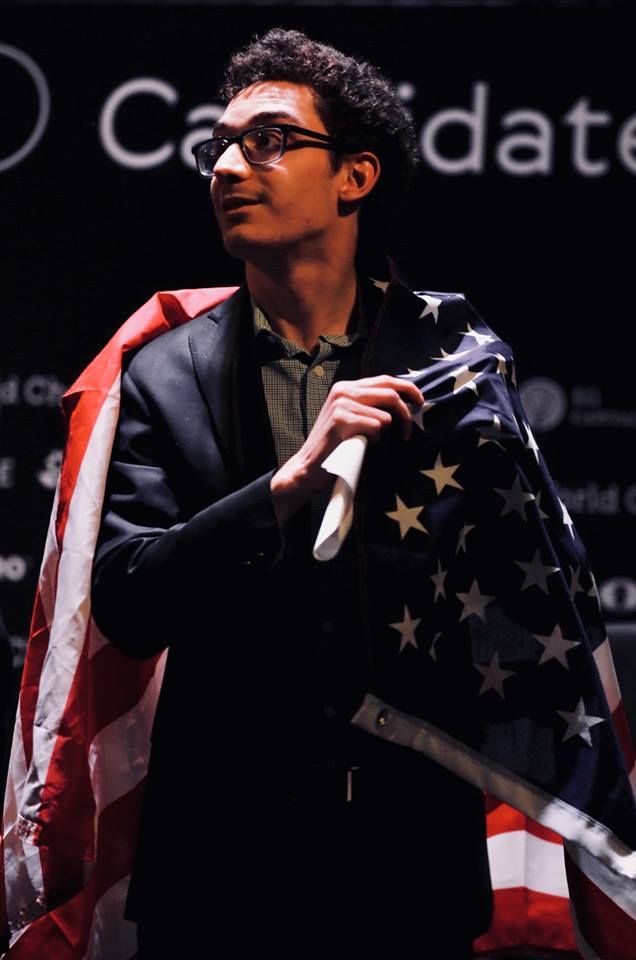 (Note: Many people are talking about Gata Kamsky's match against Karpov in 1996. But that was not an undisputed match and at that point Kasparov was stripped of the World Champion's title by FIDE and given to Karpov. When it comes to undisputed World titles Caruana is the first American after Fischer to play the World Championship)

What was extremely impressive about Fabiano is the fact that he kept his cool in the last round and brought home the full point. At some point the games had already ended in draws between Kramnik and Mamedyarov and also Karjakin versus Ding Liren. A draw would have been sufficient for Caruana to win the Candidates. But he played on and won the last round. "The position was just too good to agree to a draw," said Caruana in the post-game conference. 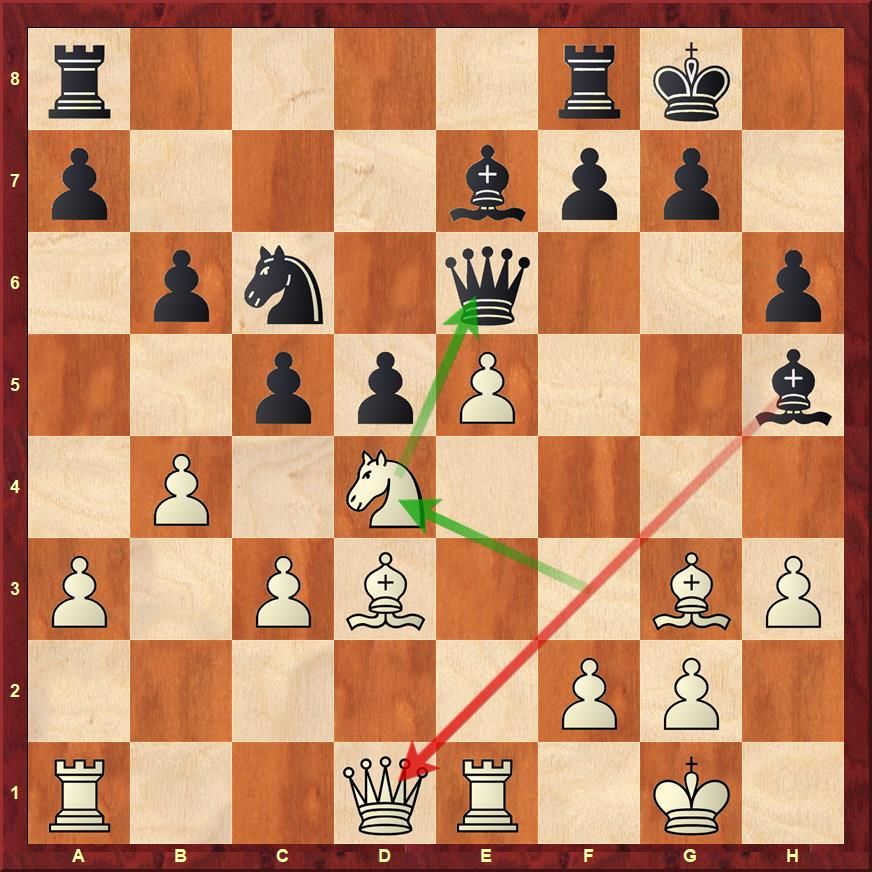 After attaining a fine position out of the Petroff Opening, things were looking good for Caruana. Grischuk couldn't handle the status quo any more and went for the forcing Nd4!? Fabi took on d1 and Grischuk captured on e6. The resulting position looked round about even but Caruana played a fine move in this position. 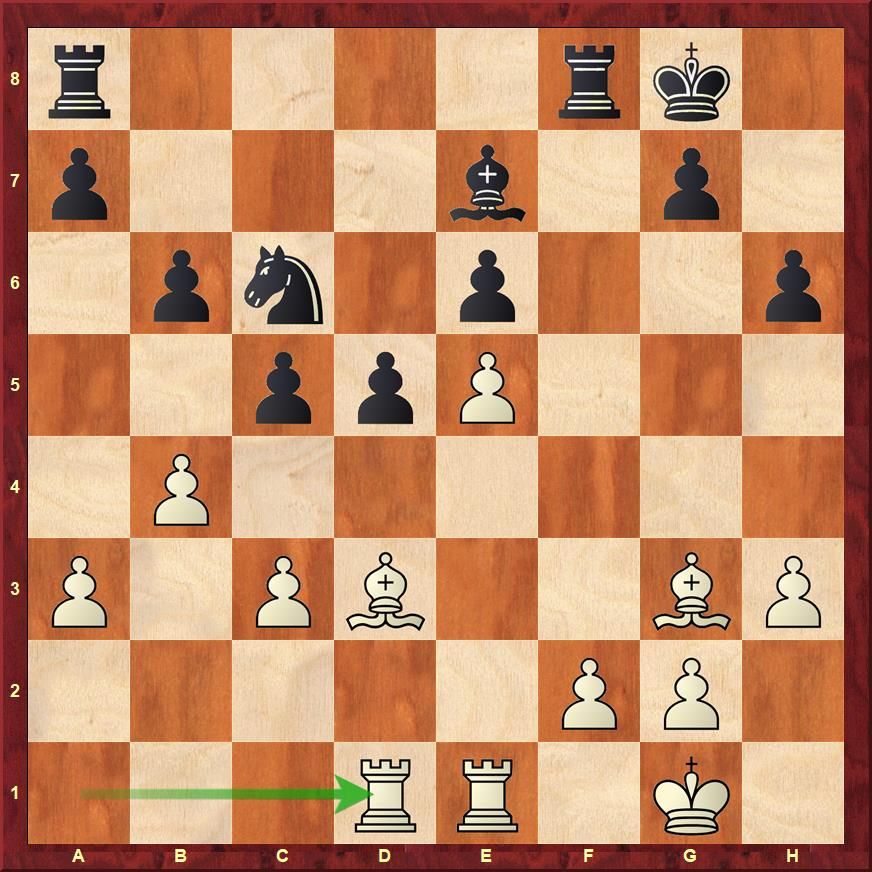 What would you play as Black here?

I like Caruana's decision very much. He played the move ...c4! Sometimes we reject such moves because we feel that the d4 square is weakened. But in this case there is no white knight which can safely sit on d4 and hence it makes complete sense for Black to play ...c4 and follow it up with ...b5 and later try for d4. At this point it was clear that Fabi was doing really well and could not lose the game. 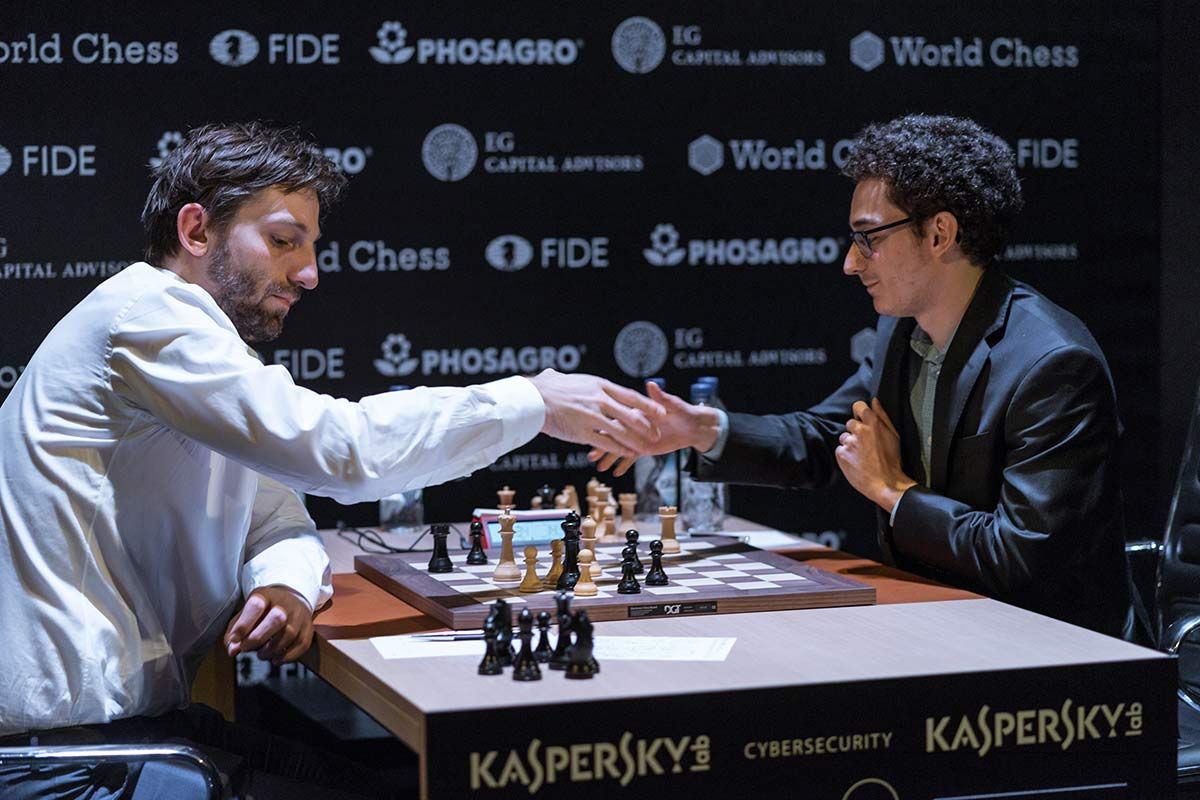 Grischuk was the first one to congratulate Fabiano Caruana! | Niki Riga

The final standings of the event 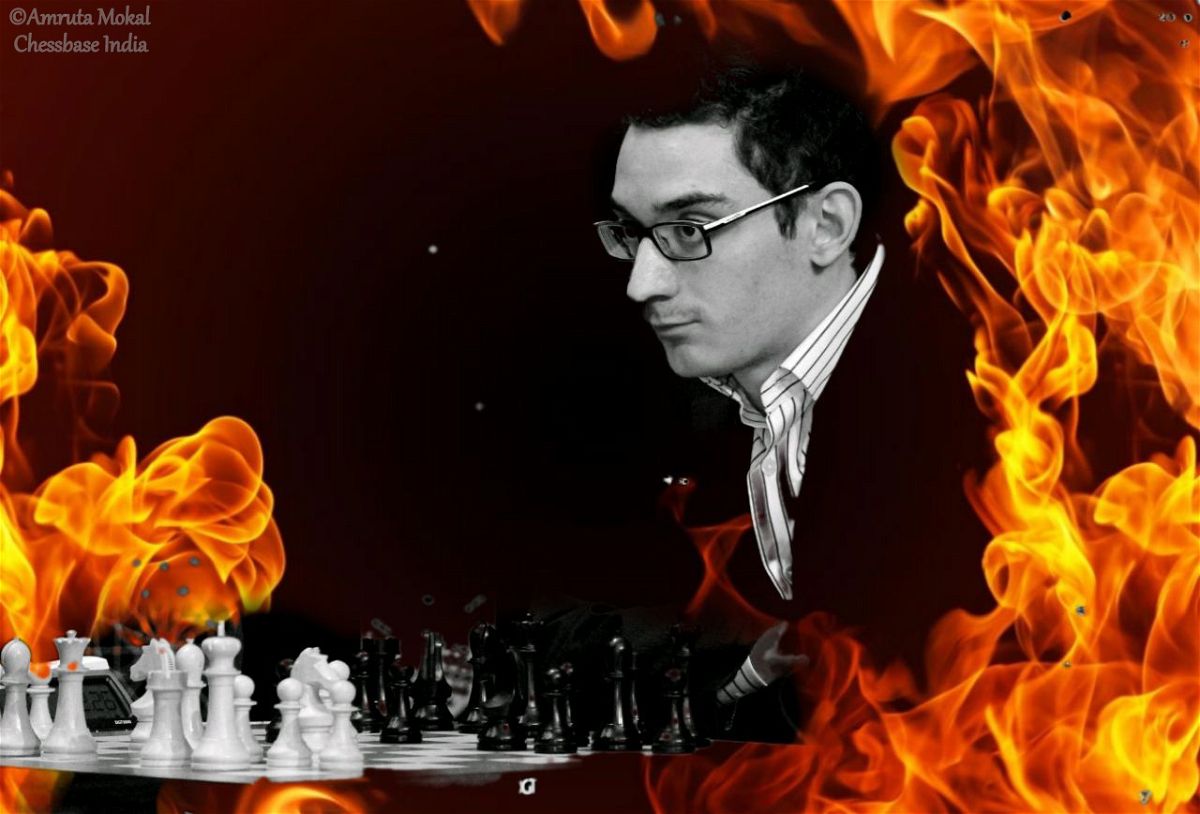 Caruana was on fire at the event winning it with 9.0/14 and a margin of one full point | Photo: Amruta Mokal 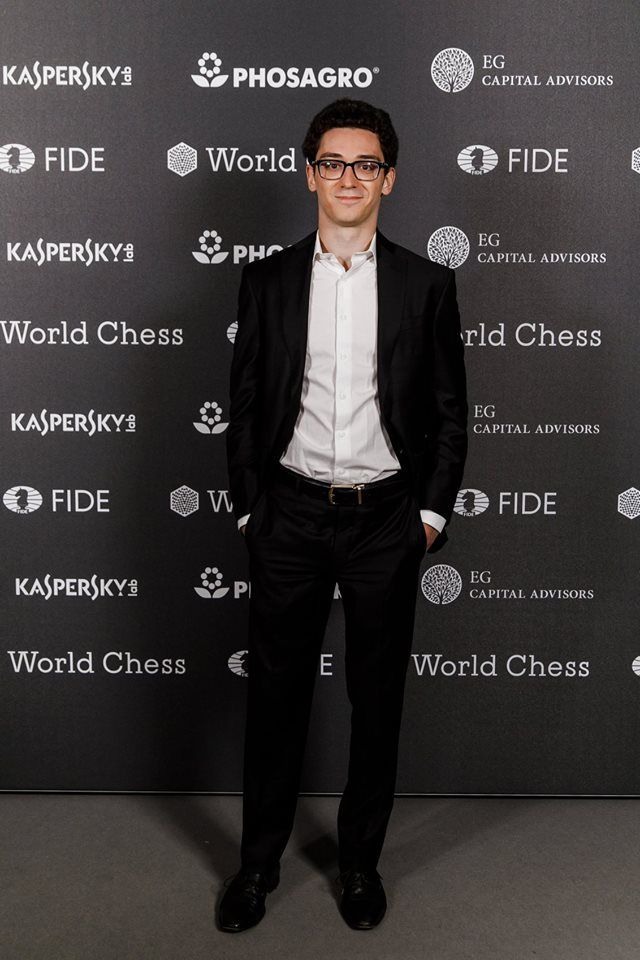 The look of a man who is happy with his life! | Photo: Nick Dunaevsky 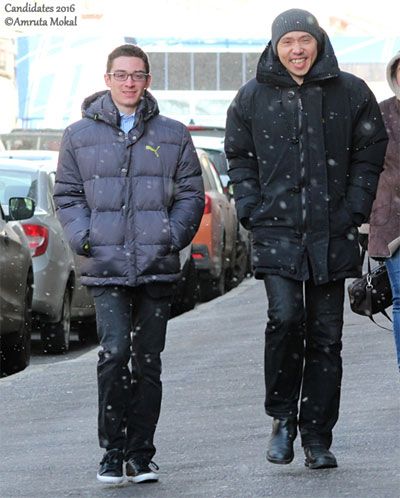 Caruana with Kasimdzhanov at the Candidates 2016 | Photo: Amruta Mokal

"What is it that makes Caruana a dangerous opponent for Carlsen," asked Daniel King to Kasimdzhanov. "Well, he has me!" was Rustam's reply. Surely Kasimdzhanov is a huge asset to Fabiano and with his experience of working for Anand in the past, he will ensure that Carlsen has a hard time in this World Championship Match. 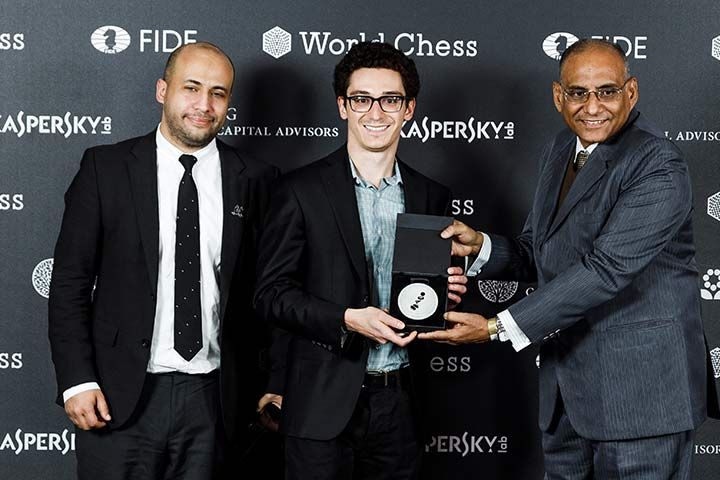 No matter who wins the event, there is always an Indian in the frame! D.V. Sundar presents the trophy to Fabiano Caruana. Ilya Merenzon, the CEO of Agon is also in the frame | Photo: World Chess 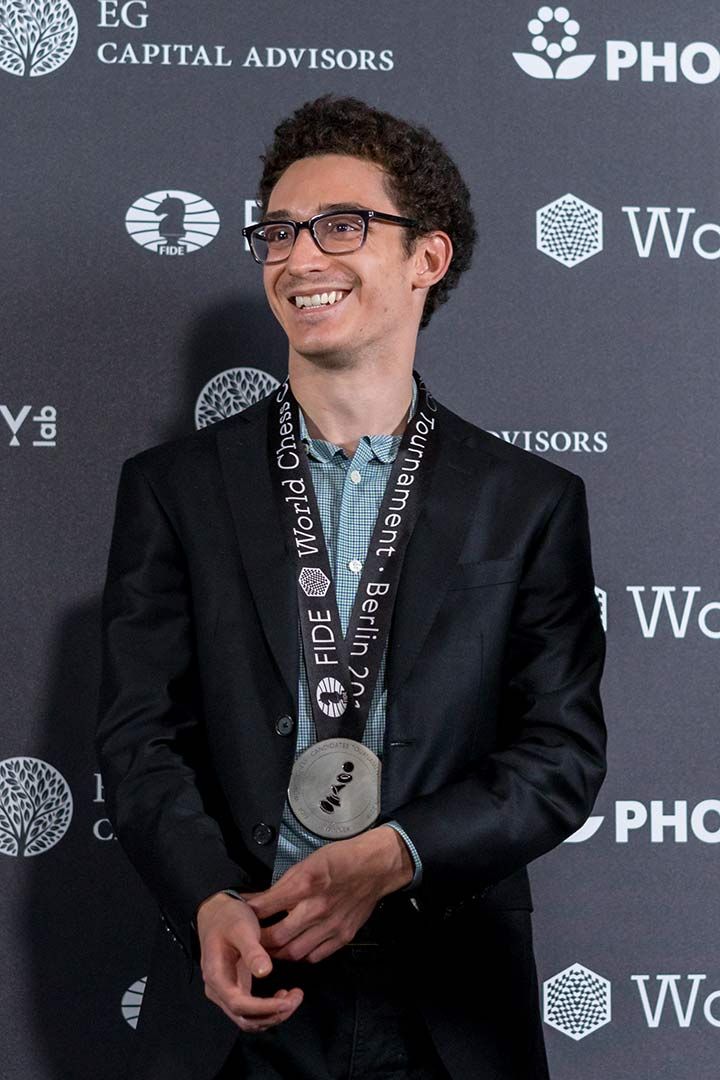 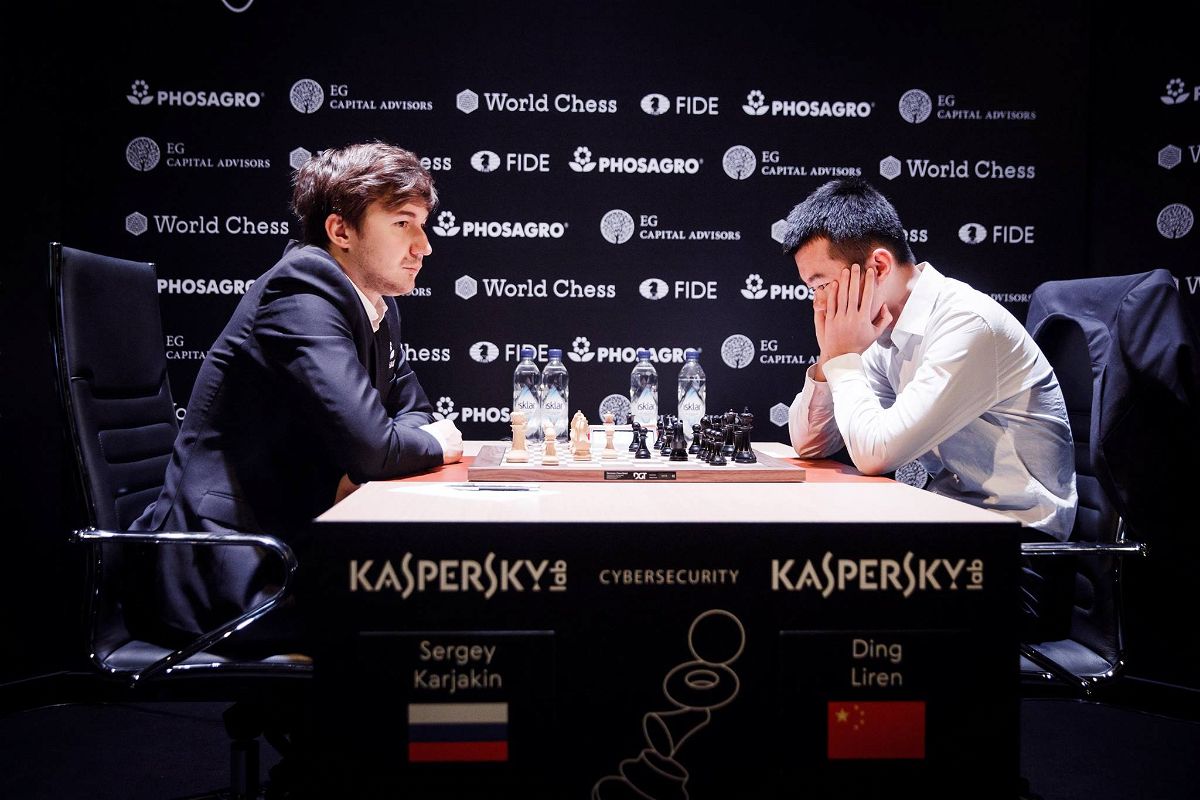 Ding Liren played some of the best chess of his life at the Candidates. 13 draws and one win! He did not let Karjakin win the last round | Photo: World Chess

One moment of the game between Karjakin and Ding Liren from which I could learn a lot was: 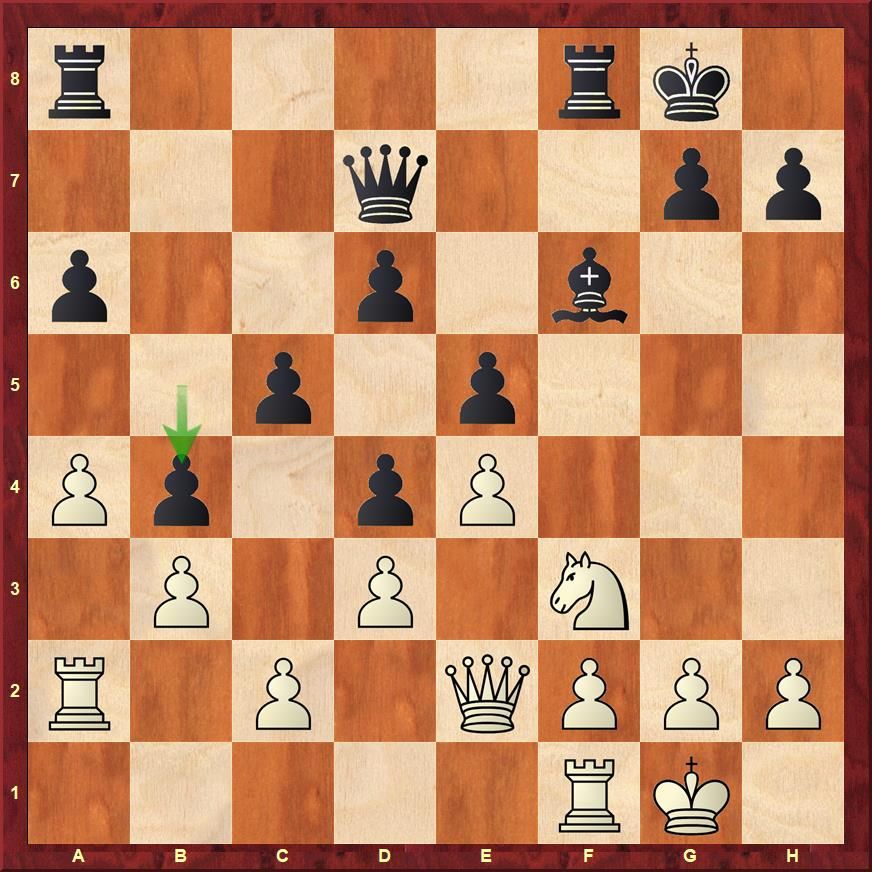 I thought that the move ...b4 was incorrect by Black. Mainly because it cedes the beautiful square on c4 for the white knight. But when you see the course of the game you realize that the idea behind it was pretty deep. 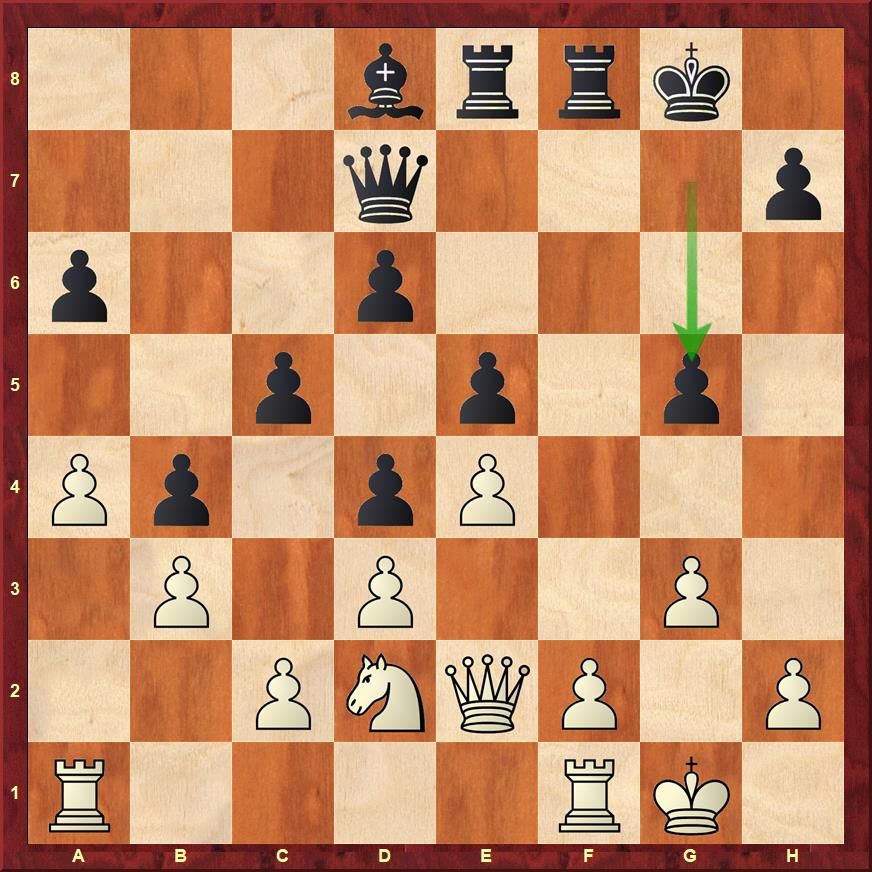 What Ding Liren did with ...b4 was to close the queenside entirely. And then he began his offensive on the kingside with g5 and pushing his pawns ahead. He did not have to worry about White's ideas of axb5. The Chinese player won two pawns and then went into an endgame. But his bishop was so bad tha Karjakin held the position without too many difficulties.

"I am happy with my performance!" Ding Liren speaks to Daniel King

Kramnik and Mamedyarov played a fighting game of chess. But in the end it was drawn. 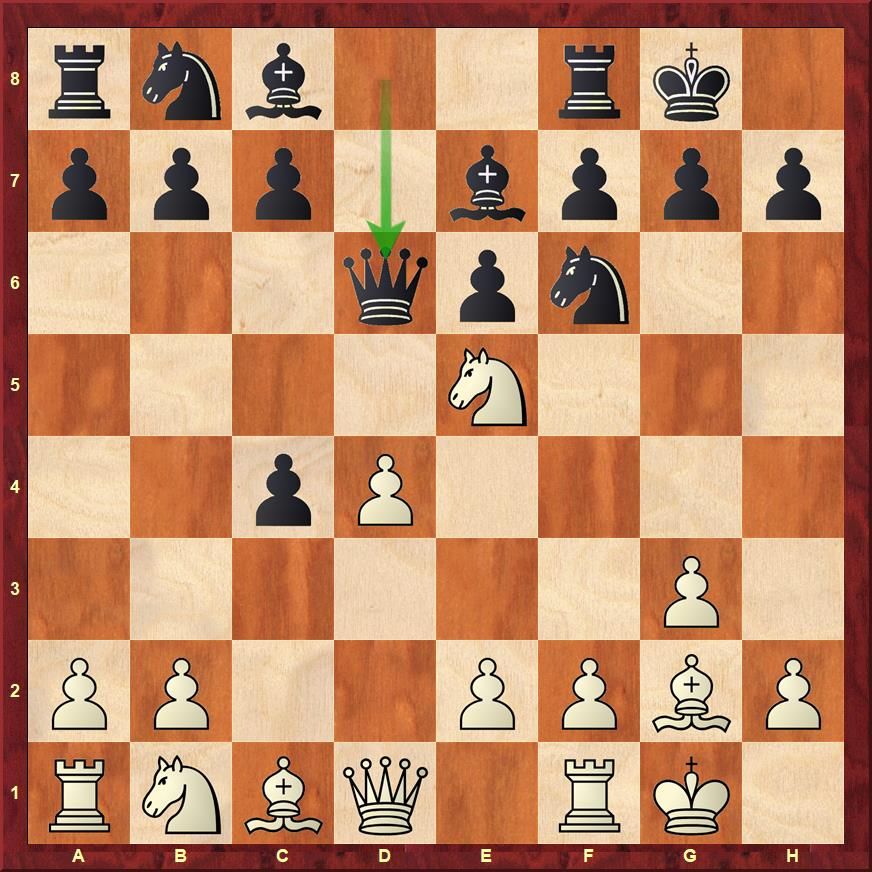 Shakhriyar Mamedyarov played an interesting opening idea with ...Qd6 but it was not sufficient to throw Kramnik off his balance, as the Russian played enterprising and imaginative chess 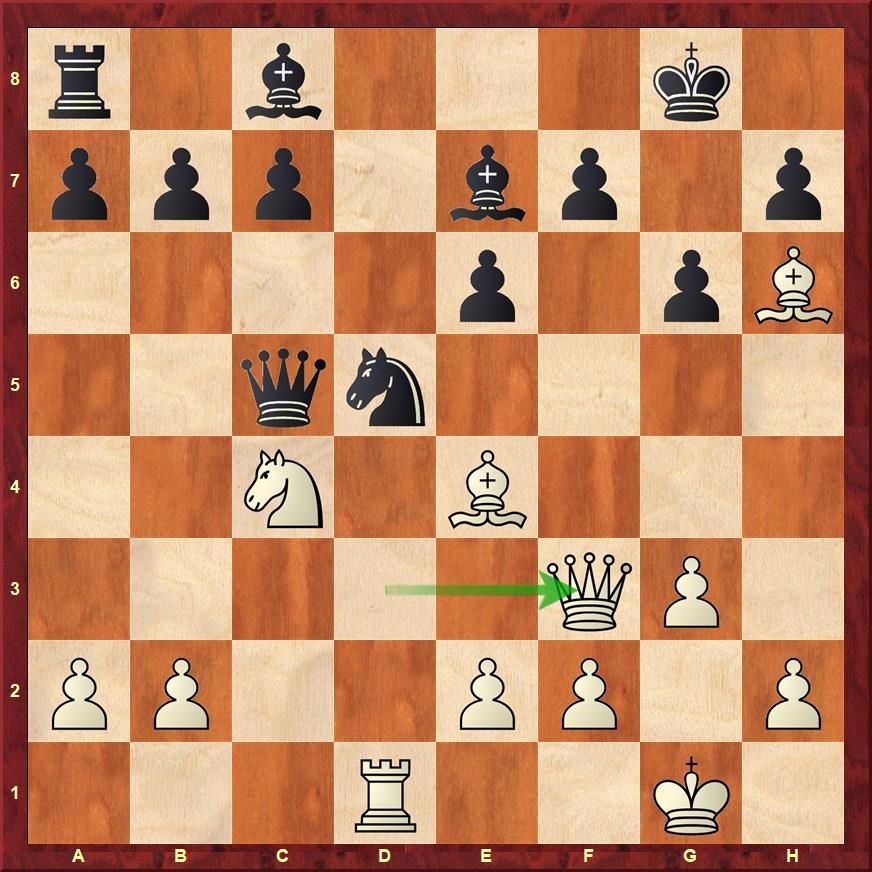 Qf3! was such a nice move to keep the pressure going on the position. White gives up his c4 knight but taking it would mean Rxd5 was possible. The position remained complicated and towards the end we did see some fireworks before the players signed the peace treaty. 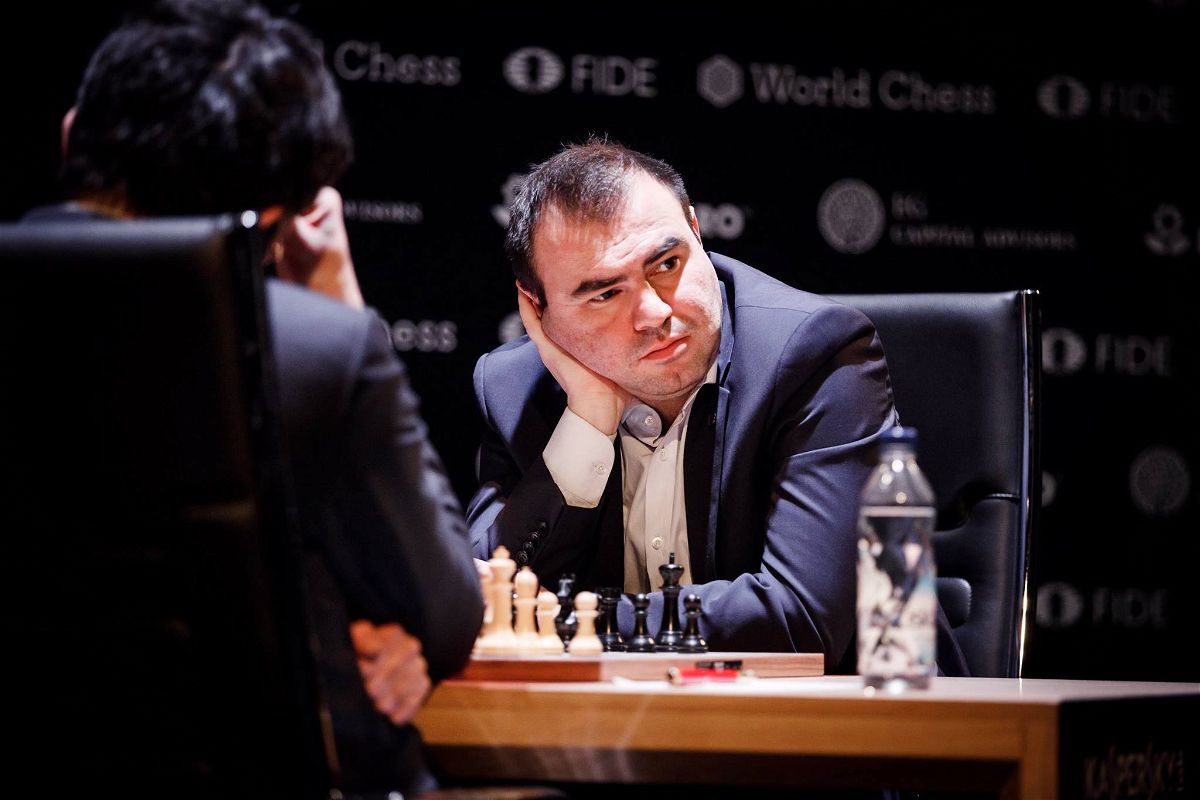 Mamedyarov played well in the event and was always in with a chance to win it, but eventually fell short
Wesley So speaks with Daniel King after the event
Daniel King tries to find out Aronian's reasons for not performing upto his potential

The World Championship 2018 will be held in London from the 9th to the 28th of November 2018. Both the players have played 52 games with each other as per my Mega Database, including all formats and Magnus has 21 wins to Fabiano's 11. In just Classical encounters Carlsen has a 17-13 lead. Who do you think will win the World Championship Match 2018? Leave your answers in the comments section below.

Been great fun following the candidates as a chess fan. Congrats to Caruana on a fully deserved victory, and good luck in November!

This video makes you believe that Caruana can give a tough fight to Magnus Carlsen! The way he keeps nerves in time pressure is just fantastic! 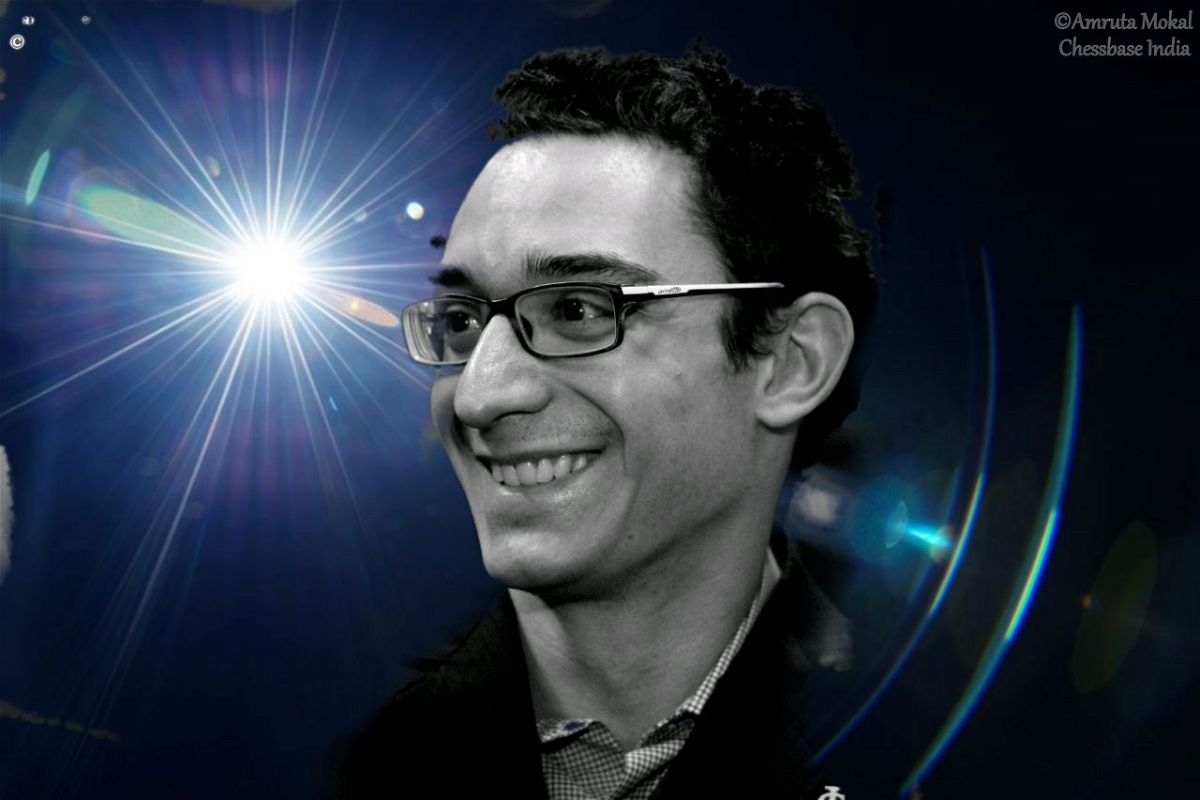 Various last round scenarios (just to show you how complicated it was!):

he wins the tittle straight away with 9 points...

*and Mamedyarov and Karjakin also draw their games then Caruana wins the title with 8.5 points

* and Karjakin draws/loses but Mamedyerov wins then Mamedyarov and Caruana finish with 8.5 points each. (As their head to head score and number of wins would be same, third tie break would be needed. Mamedyarov wins on SB)

*and Karjakin loses/draws but Mamedyerov wins then Mamedyarov wins the title with 8.5 points.

*and Mamedyerov and Karjakin both lose their games, then Caruana and Ding Liren finish with 8 points each but Caruana wins the title (Second tie break number of wins)

*and Mamedyarov draws and Karjakin draws then Caruana, Mamedyerov and Karjakin are tied on 8 points each. But Mamedyerov wins the title. (1st tie break head to head score)

*and Mamedyarov draws and Karjakin loses then Caruana, Mamedyerov and Ding Liren are tied on 8 points each. But Ding Liren wins the title. (1st tie break head to head score)

We thank Vishvesh Kochrekar for his analysis of all the scenarios!