Would you like to learn the Beasty Botvinnik with Erwin l'Ami?

Erwin l'Ami, a strong grandmaster, our good friend and the author of many ChessBase DVDs turned 33 yesterday! Erwin is one of the most colourful personalities in the world of chess and the number of roles he performs is quite mind-boggling. He is a well accomplished chess player with an highest Elo of 2651, second of Anish Giri, husband of IM Alina l'Ami and author of a number of best selling ChessBase DVDs. In this article we interview Erwin about his latest DVD - The Beasty Botvinnik in the Slav. Towards the end of the article we also provide you with a repertoire against 1.d4 for Black with 6 best DVD recommendations at a super discount. 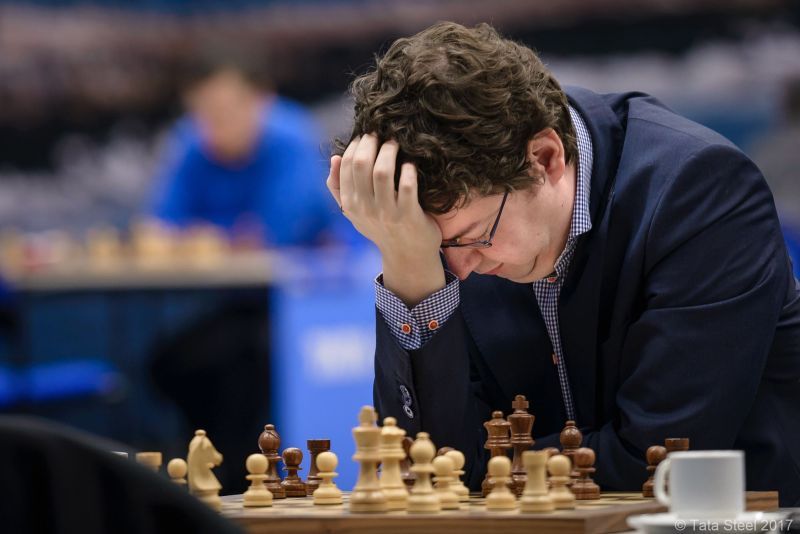 Oh God! I am already 33 years old! One of the finest Dutch grandmasters Erwin l'Ami was born on the 5th of April 1985 | Photo: Alina l'Ami 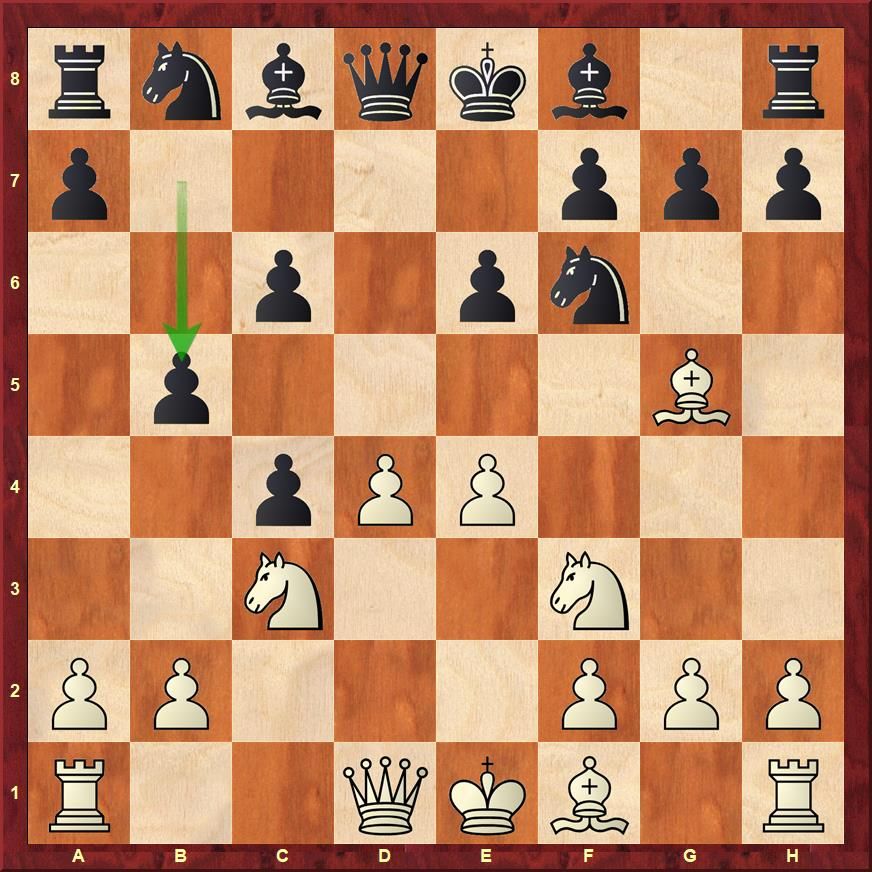 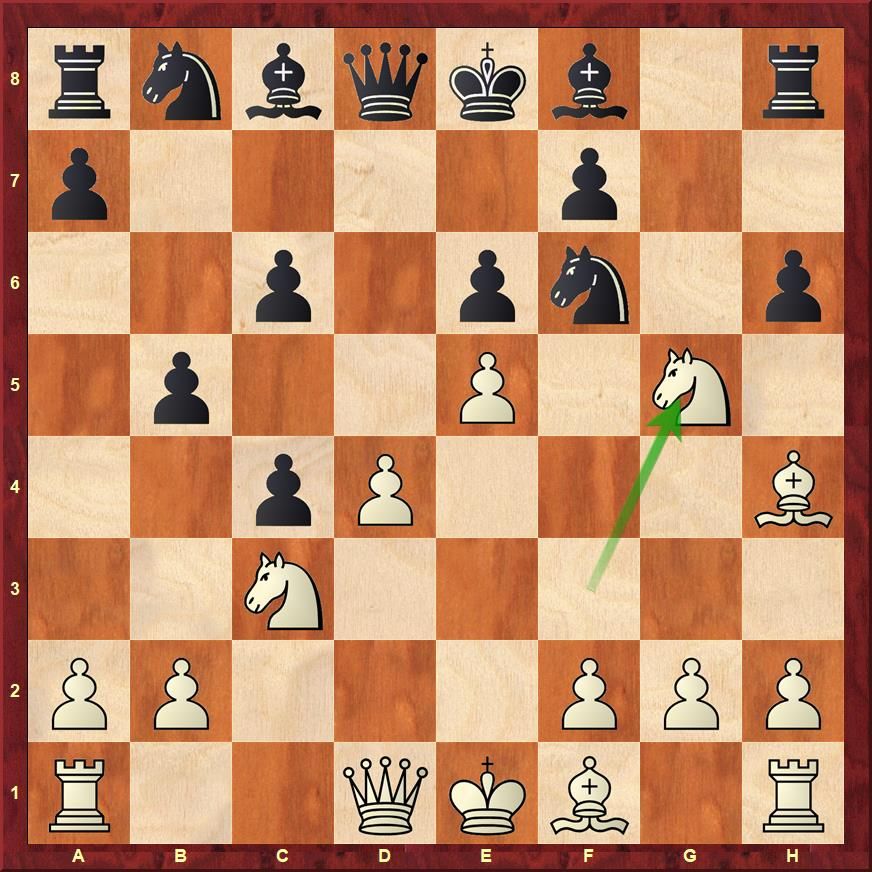 Of course 9.Nxg5! and the complications of the Botvinnik variation begin!

Erwin l'Ami explains in his introductory video that although the name of the opening is the Botvinnik Variation, still the first games that were played in this line were not by Botvinnik. He also tells us about a German player named Klaus Junge who played 6 games in this line before he met with a tragic death at the age of just 21 years.

Erwin l'Ami's intro to the Beasty Botvinnik. I like the way he gets down to business immediately without beating around the bush! 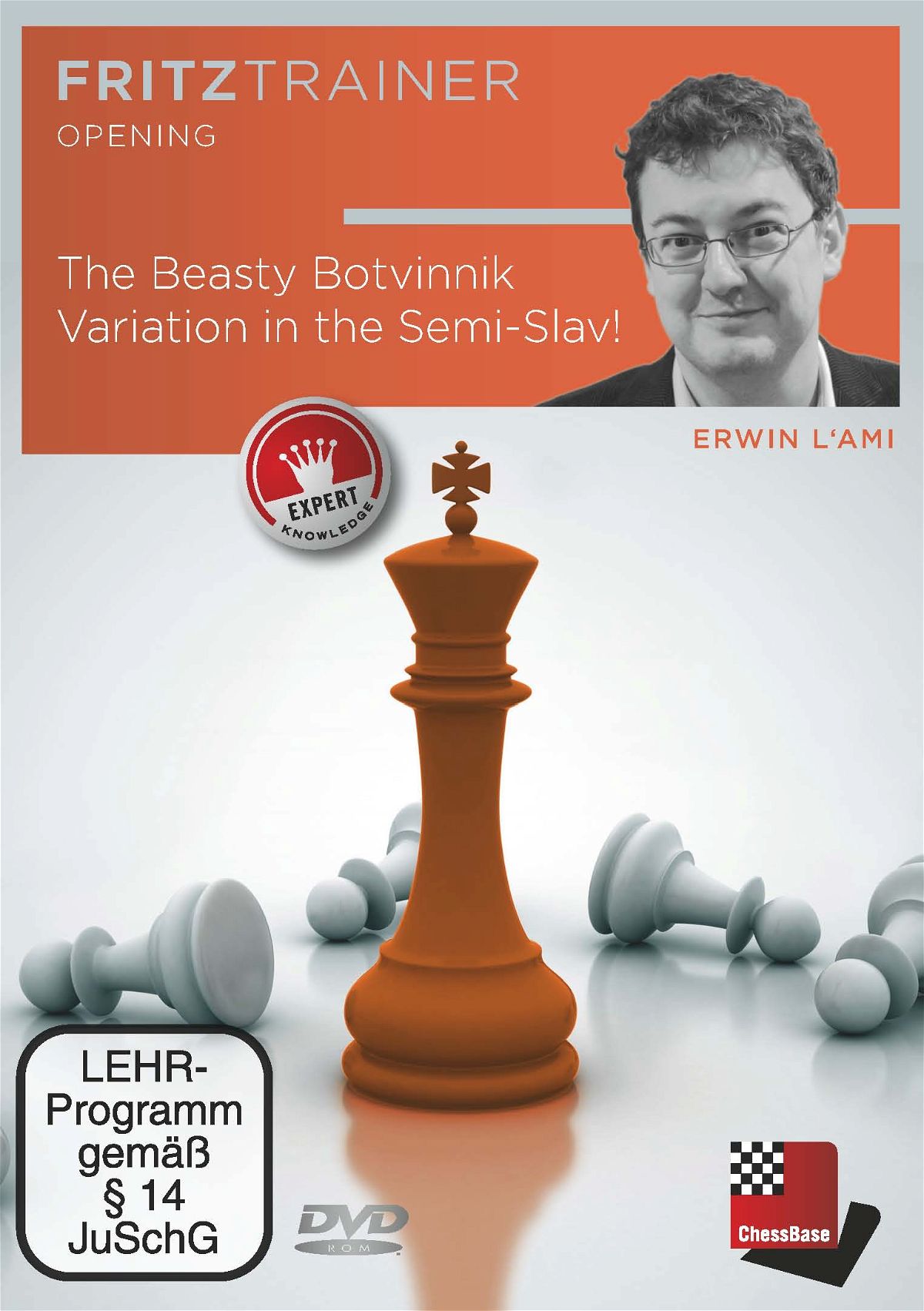 Here's a small interview with Erwin about the DVD that he has made. It gives you an insight into what you would be looking at if you bought the DVD.

Sagar Shah (SS): Is this DVD only from Black's point of view or also from White?

Erwin l'Ami: The DVD offers a sharp Botvinnik repertoire against the Semi-Slav for players with the black pieces.

SS: Many people think that the Botvinnik variation is dead. It has been analyzed until the end. What is your opinion?

EL: After his 1927 World Championship match with Alekhine, Capablanca famously expressed his fear that the QGD would destroy chess because of its drawish nature. 90 years on we still find new ideas all over the place. As yet, there are no truths in chess and I have no doubt that a few years down the line I will discover a lot of room for updates on my DVD as well. 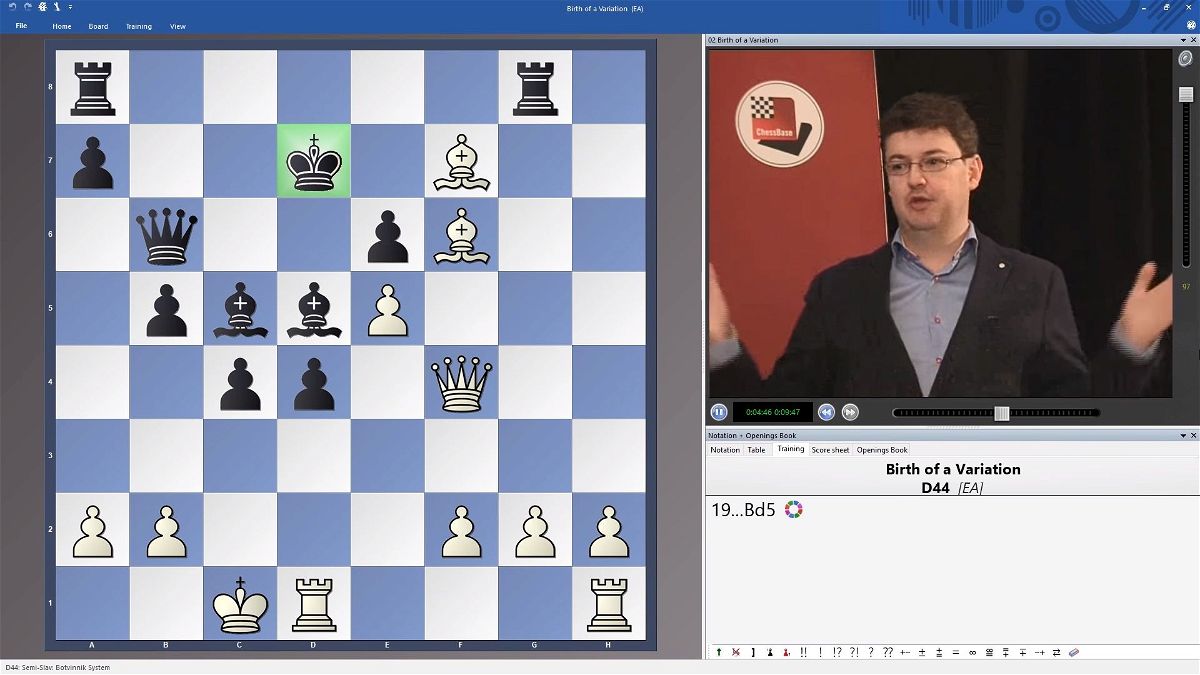 Having a nice time with the complexities is Erwin l'Ami!

SS: We do not want you to spill all the beans here, but what was the novelty or a new idea that you found and you are really proud of.

EL: In the main line with 16.Na4 Qb5 17.a3 I decided not to focus on 17...Nb8 which is considered the main line these days, especially in correspondence chess, because I found the line that occurred in, for instance, the game Ding Liren-Yu Yangyi to be depressing and very hard to play for black in a practical game. 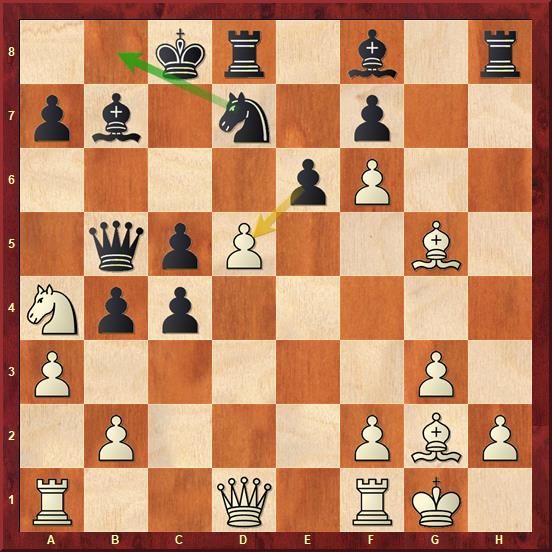 Yu Yangyi went for 17...Nb8 with black in this position and suffered for a long time. L'ami, however, suggests the move 17...exd5 instead.

SS: Which is the most critical line for Black according to you?

EL: A few years ago 19.Bf4 was very hot in the line that I just mentioned above, but the novelty wore off I think and nowadays 19...Bh6 20.Bd6 Bf8 is considered to be ok for Black. I, of course, go through those lines on the DVD. I devoted most attention to 19.Be3 but it would be a pity to reveal too much here (smiles).

My approach, in general, was very ambitious, trying to revolutionize the Botvinnik to an extent, find some new ways of approaching the main lines as Black. In many lines, you will find that I stray away from what is known as the 'mainline'.

SS: What are the major takeaways for the student who watches this DVD entirely, apart from learning the Botvinnik Variation?

EL: In the initial video's I try to give an overview of typical positions that may arise in the variation. We look at illustrative endgames with Black having the usual queenside majority and White pushing on the other wing. Typical manoeuvres, tactics, the positioning of the kings, such things. I hope that prepares viewers to not only try and memorize the lines (which is hard!) but also be confident to actually play the line.

SS: You are a husband, a chess player, a second (to Anish Giri), and now a regular author of DVDs for ChessBase. How do you find time to do all of this? How do you manage your time?

EL: I enjoy being all those things so I assume that makes it a lot easier. I don't feel like I'm lacking time in any way!

Building a repertoire against 1.d4 with some of the best ChessBase authors: 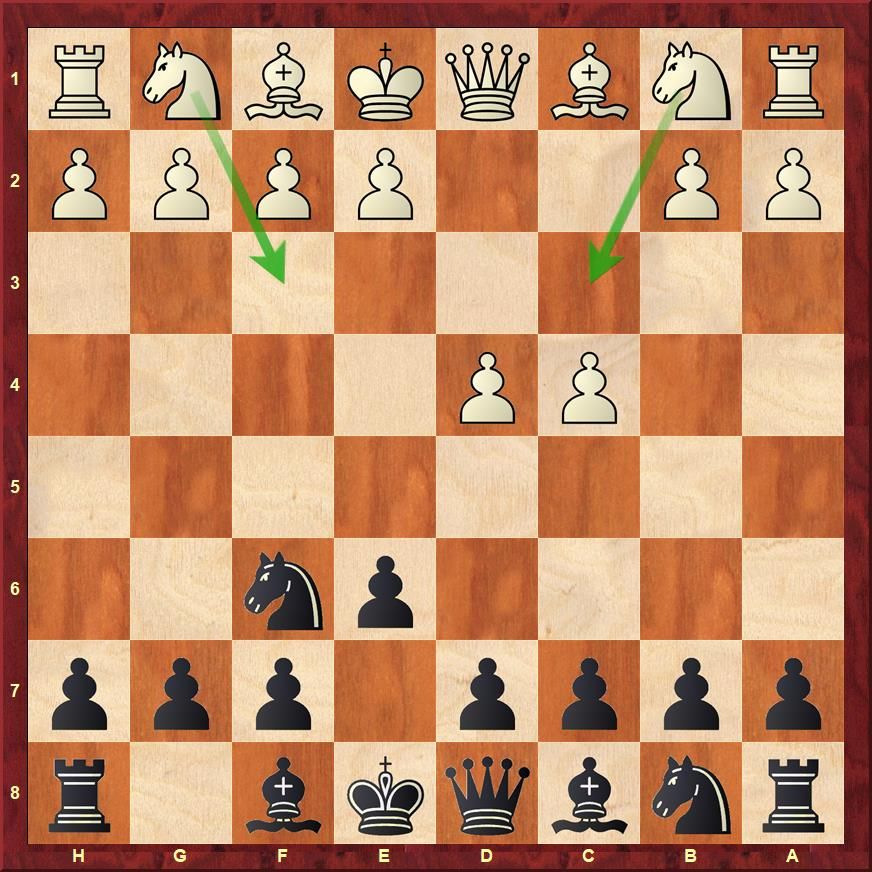 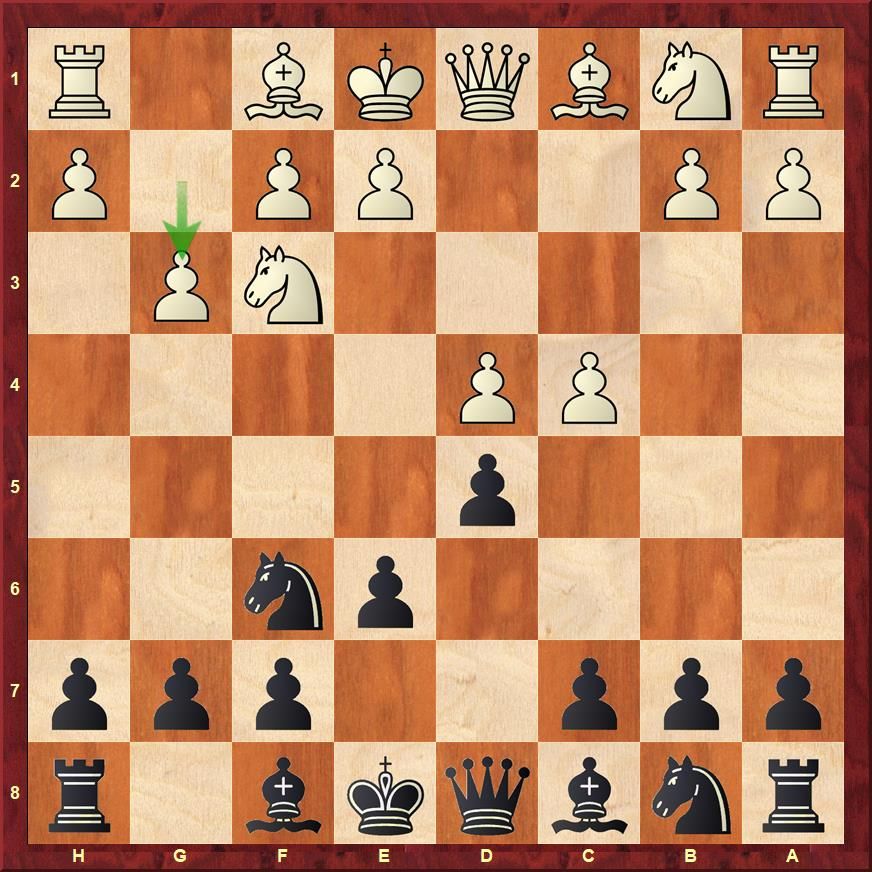 If White plays the Catalan with 4.g3 then you have Daniel King's Powerplay 24 to help you. 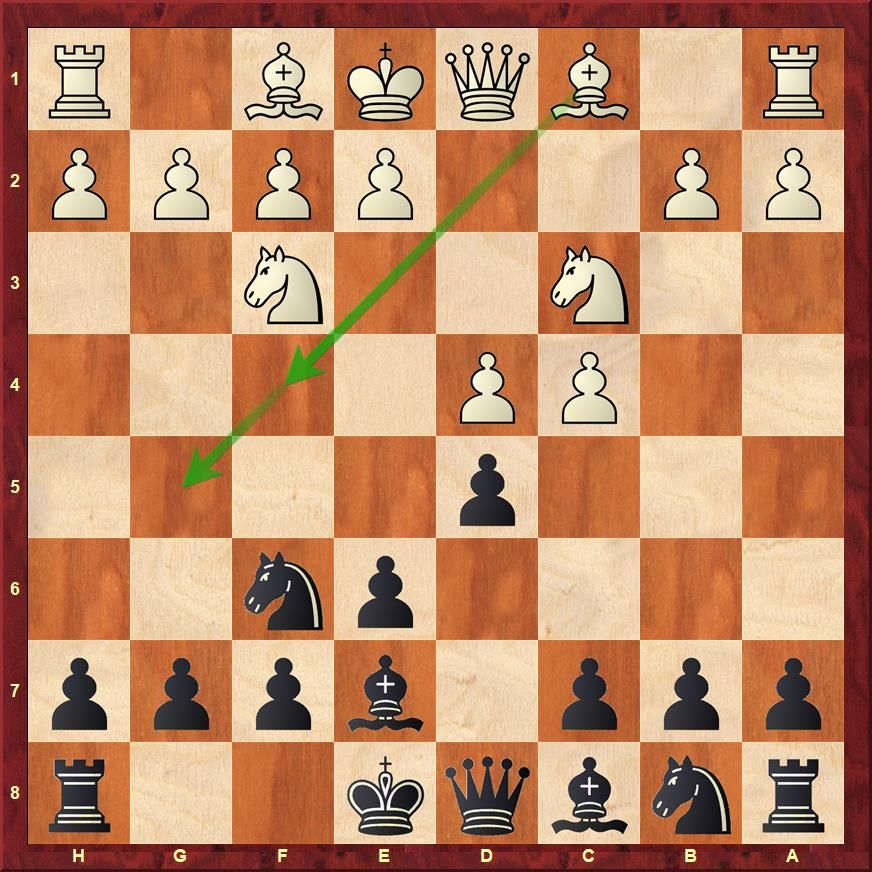 Now White has two options 5.Bg5 and 5.Bf4. Both of these are covered in detail by Daniel King in Powerplay 23 which deals with the Queen's Gambit.

There can be some days when you are in a must-win scenario and you want to play something aggressive. We would recommend you to enter the Semi-Slav territory with 4....c6. 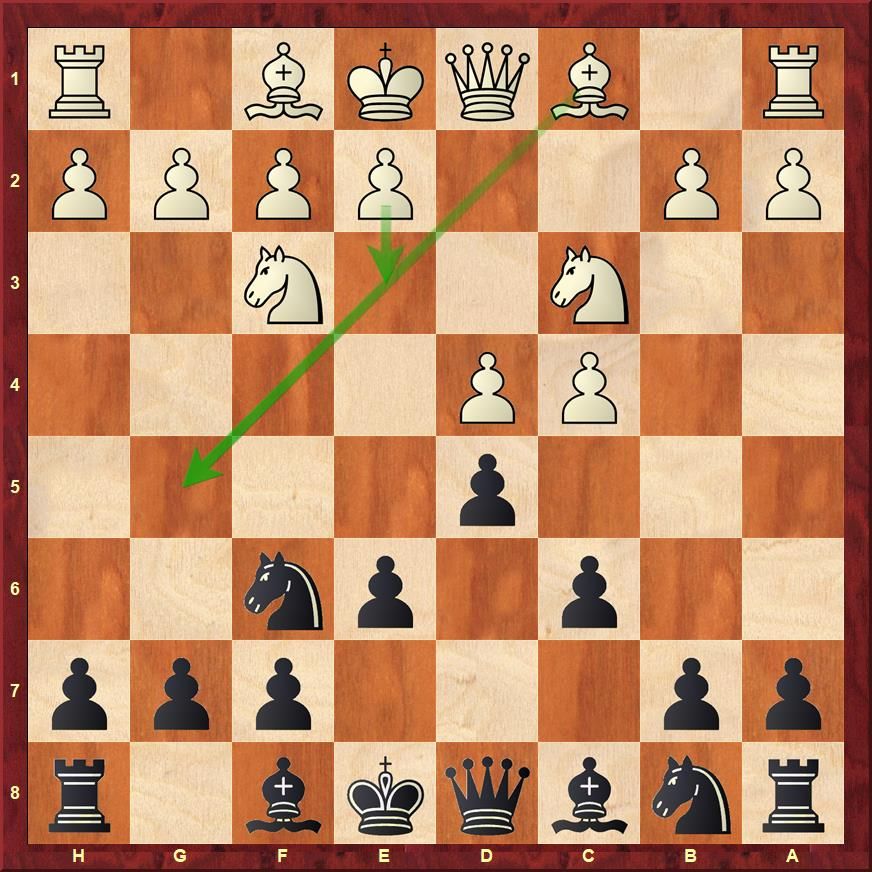 If your opponent plays 5.Bg5 then you can go for the Botvinnik Variation starting with... 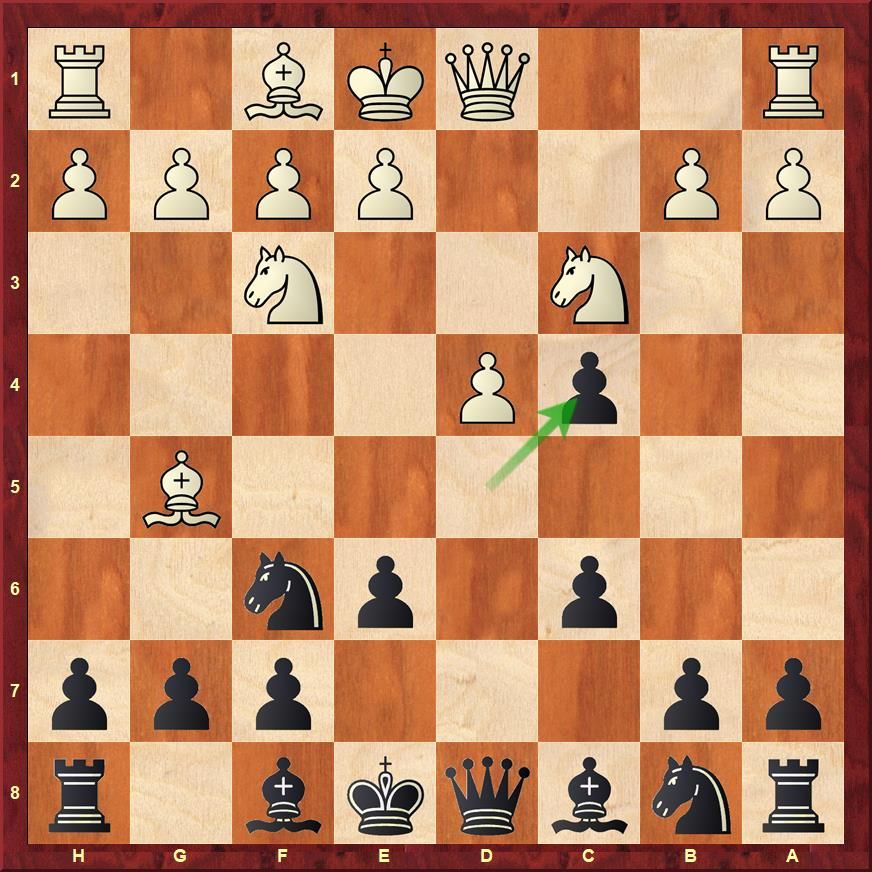 ...dxc4. Here the Beasty Botvinnik varition by Erwin l'Ami will be your guide.

In case White doesn't go for 5.Bg5, but instead chooses 5.e3 then we are in the Semi-Slav territory: 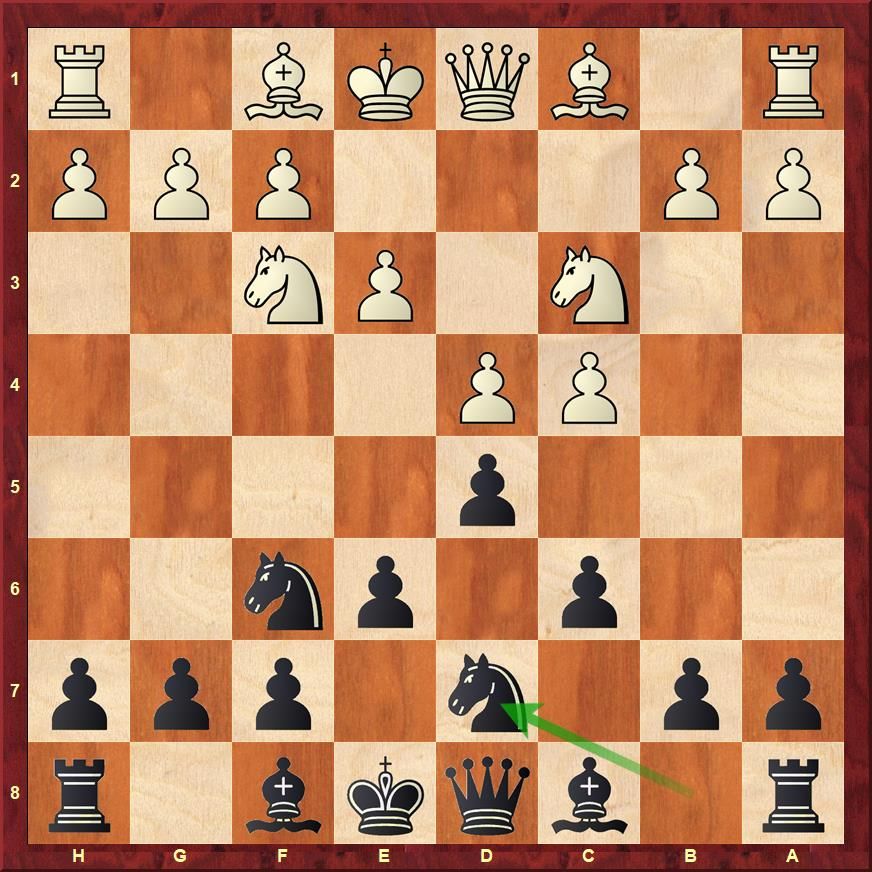 Coming back to the 3rd move: If your opponent plays 3.Nc3 then my recommendation would be to play the Nimzo Indian with 3....Bb4 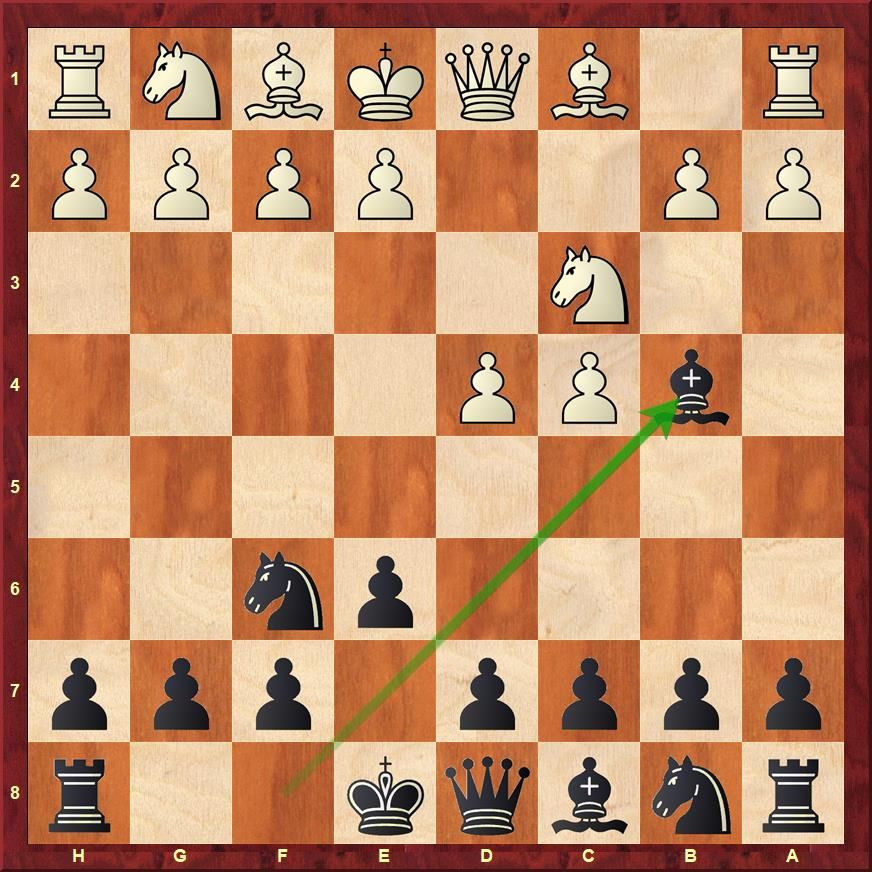 Nimzo Indian is an extremely important opening with many branches and theory, but we have a big expert who has made a latest DVD (release date 6th April 2018) in the form of Rustam Kasimdzhanov. His name of the DVD is "A lifetime repertoire - play the Nimzo Indian" 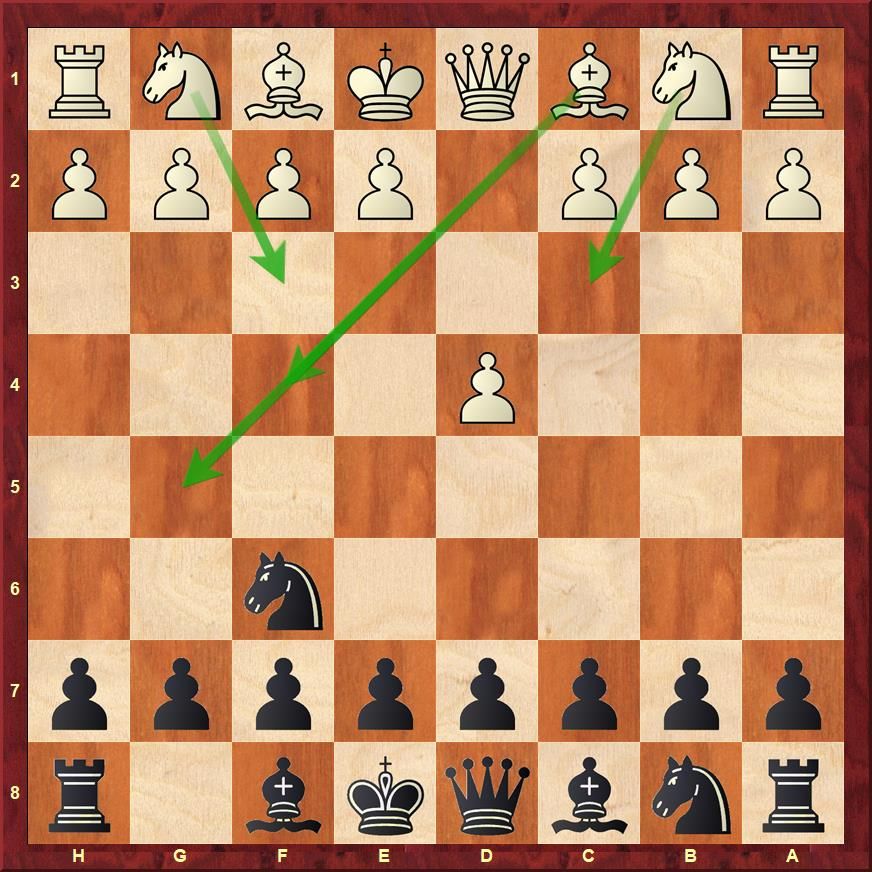 Just to be 100% sure, after 1.d4 Nf6 there are many deviations like the London, Torre, Trompowsky, Veresov etc. Daniel King covers all of this in his Powerplay 25 DVD. 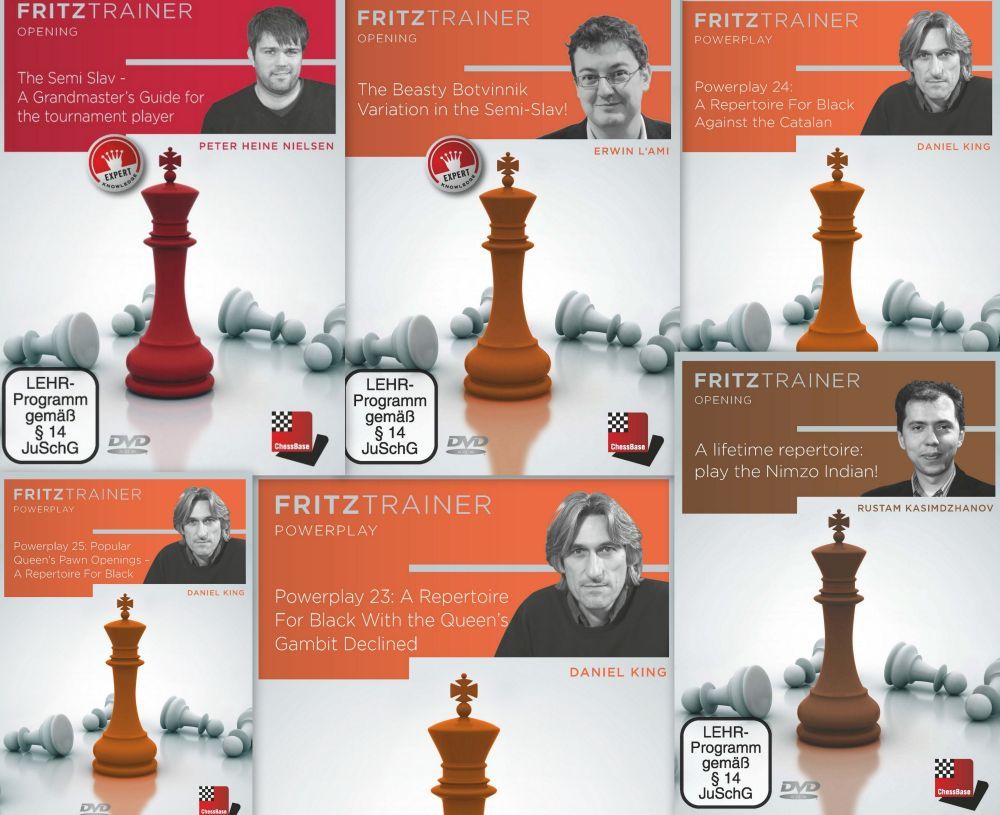 Here are the original costs of these products on ChessBase India: