The Asian Amateur events have been quite neglected by the chess community in general. Unlike the youth events at the world or asian levels podium finishes at these events is not as prestigious. However, Thai organizer Sahapol Naknavich and his team have found a winning combination whereby they were able to invite players from 23 countries and also have a separate women's section with 33 entries. How did they do it? We tell you about it in this article. Djumaev Bakhtiyor is at the top in the open while Loreshyl Cuizon leads in the women's section. Complete report by FM and chief arbiter Peter Long.

Report by Peter Long and Photos by Suchart Srisawat

It can be argued that the Asian Amateur Championship has not been an event very much in demand with either players or host countries. However, Thailand Chess Association (TCA) this year is proving to have found a formula that if followed would almost certainly ensure that subsequent championships would prosper. Given the usual chess organiser model which largely depends on participants essentially financing the event through entry fees and official hotel charges, the Asian Amateur in the past without the numbers and prestige of youth championships would find itself in some largely obscure city with something like 80 percent of the players local and without sufficient women playing to have a separate section.

Chiang Mai, Thailand has potentially changed that! The 95 participants in the Open Chanpionship and 33 participants in the Women Championship might not seem a big number but it is enormous because when looking back at previous editions, it is hard to see anywhere as many as the 23 different countries being represented and with local participation less than 50 percent! 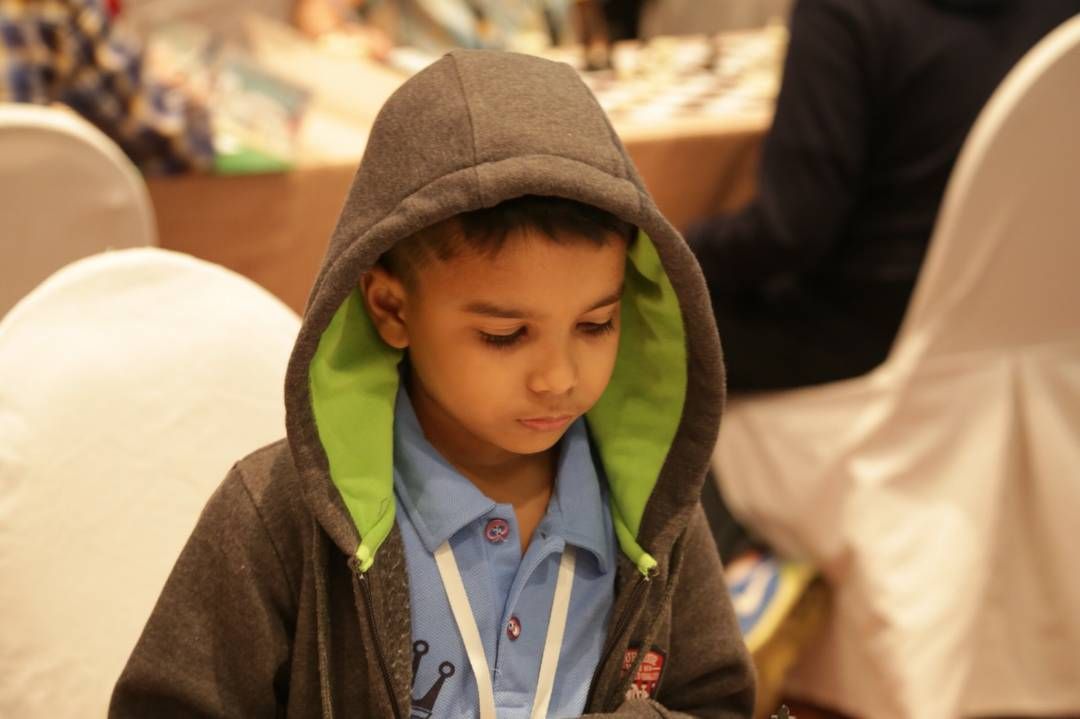 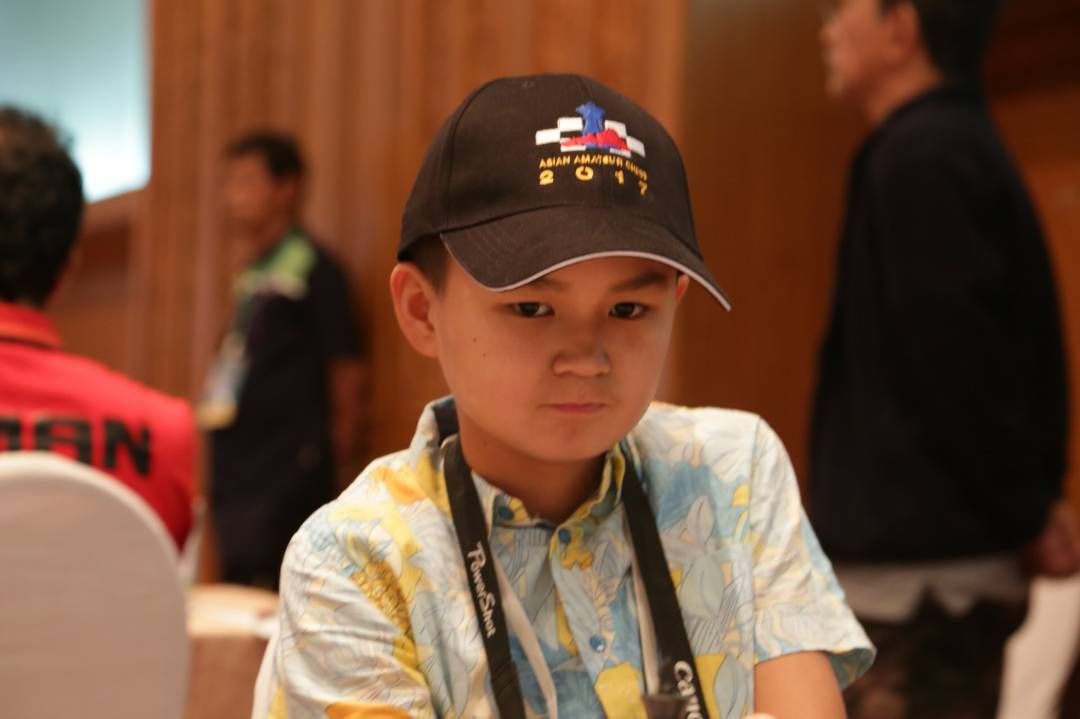 The one with a cap! 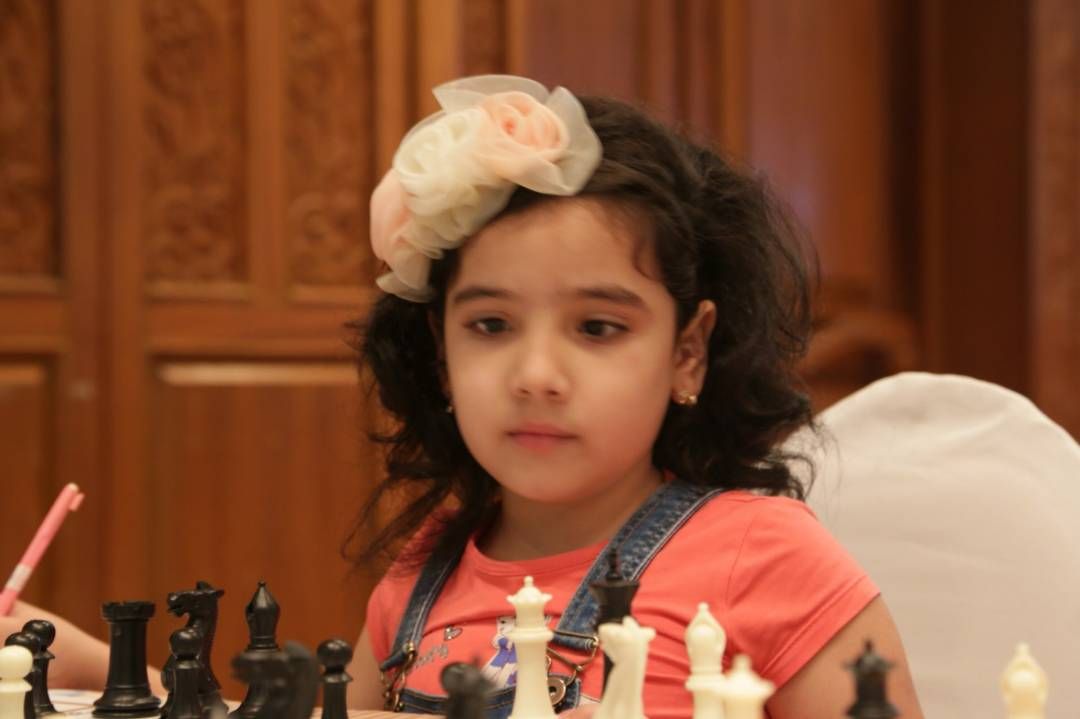 Little princesses were not to be left far behind! 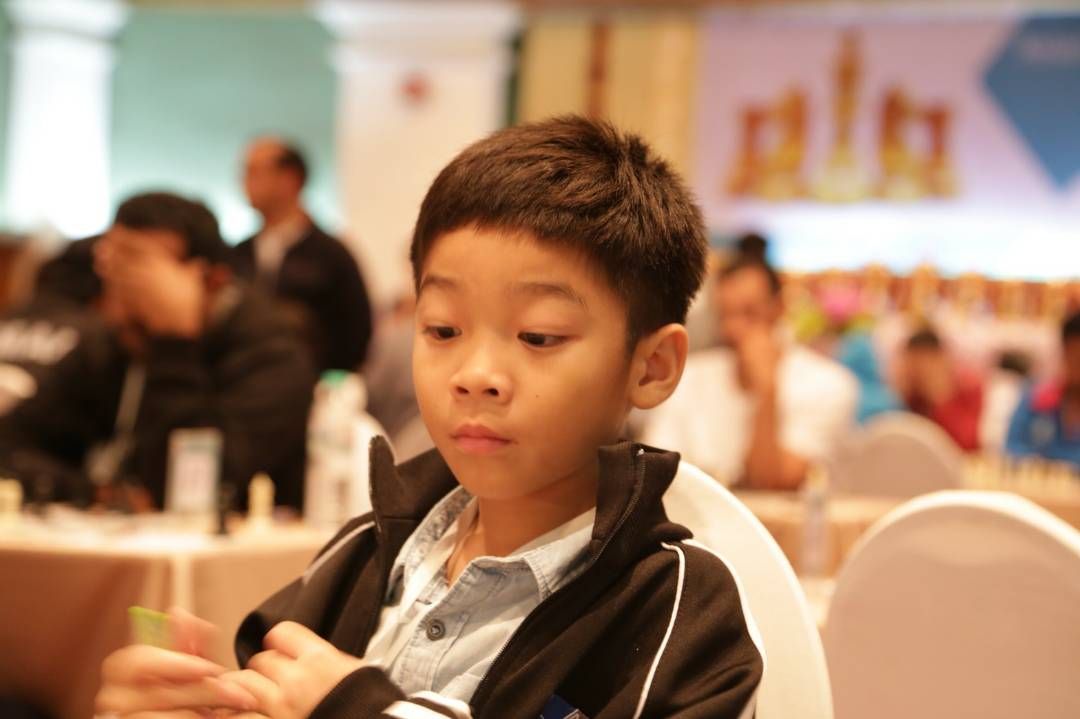 The "Oh my God! Did I just blunder" look! 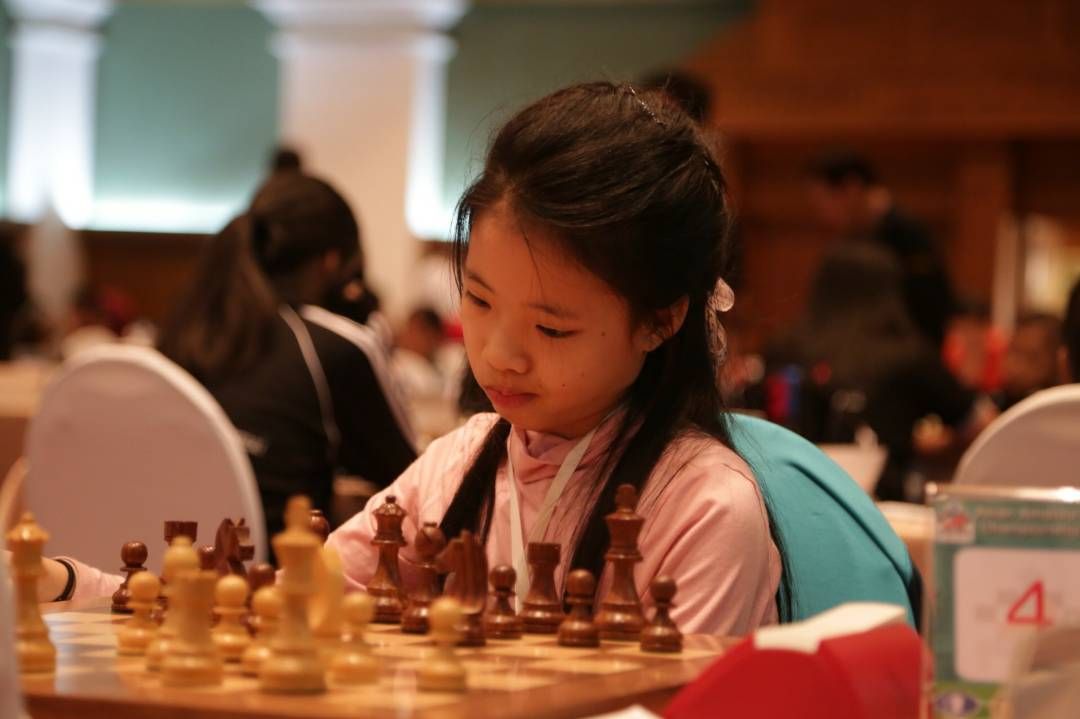 "I ain't too happy with my position!" 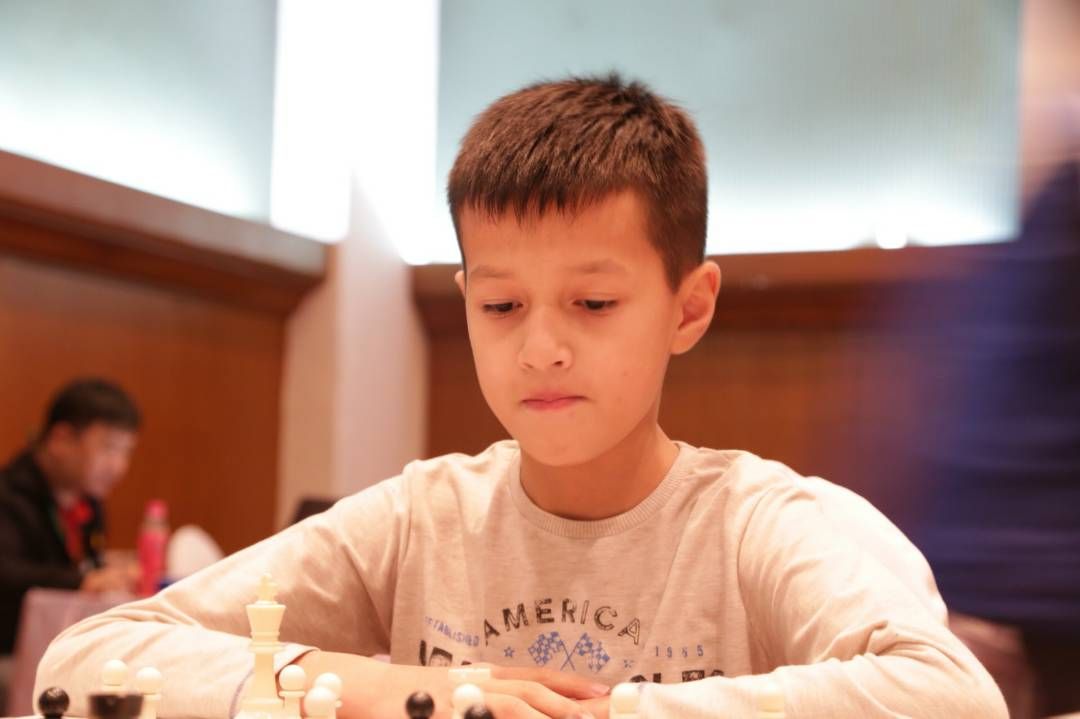 So what has the organiser - International Organiser Sahapol Naknavich - done right? First is that it is Thailand and Changmai is not only this tourist friendly country's second city but also a wonderful world class destination in its own right with its own identity and blend of unique attractions. The organisers made it affordable with an excellent hotel located within an integrated shopping complex cum convention centre which is just twenty minutes from the airport but even more importantly in the heart of the city and surrounded by Nimman, the coolest neigbourhood with an abundance of dining, spa and hangout and adjacent to many of the city's iconic temples. With all this, chess is still taking centre stage, and a high level of organisational competency on show - from a successful live games broadcast to well implemented anti-cheating measures and the accommodation of visually handicapped players. 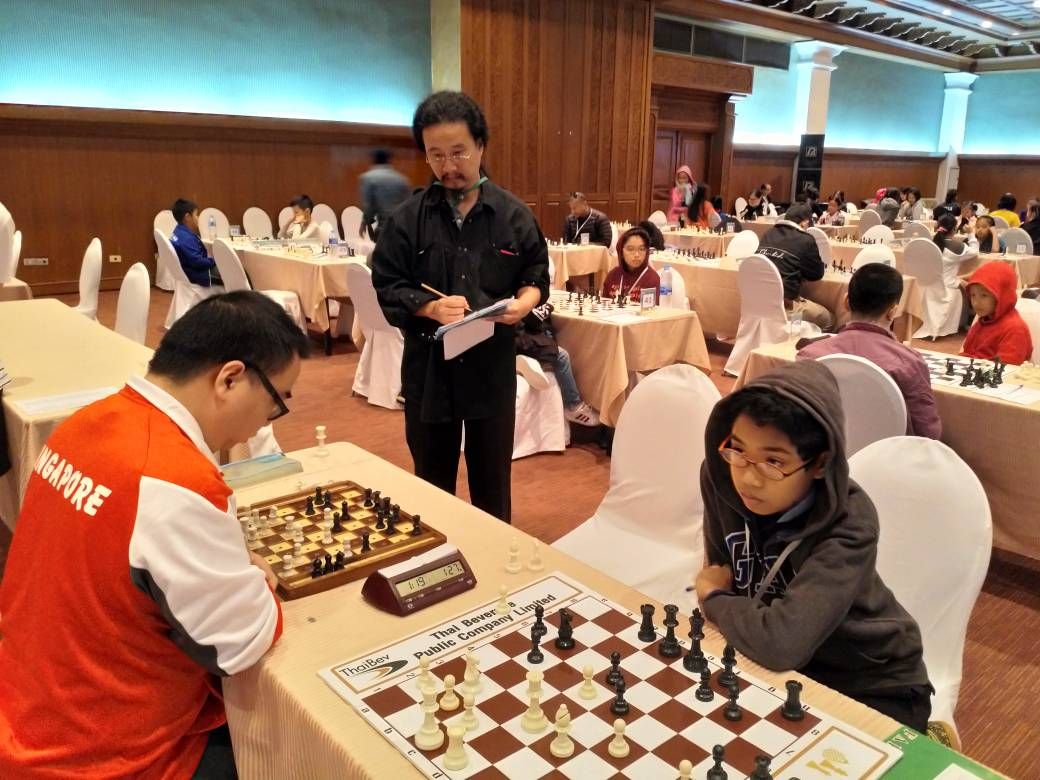 Sant Pongkiettisak has many talents including skills to facilitate participation of handicapped players. Here is Edwin Tan Yong Xhao from Singapore 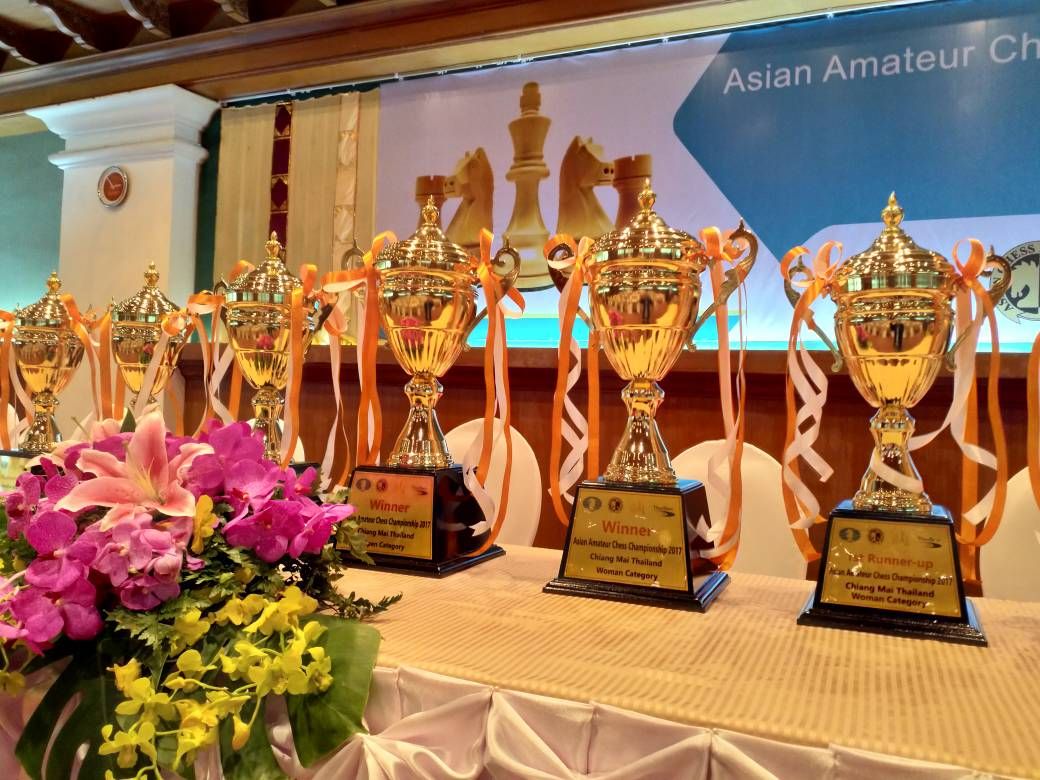 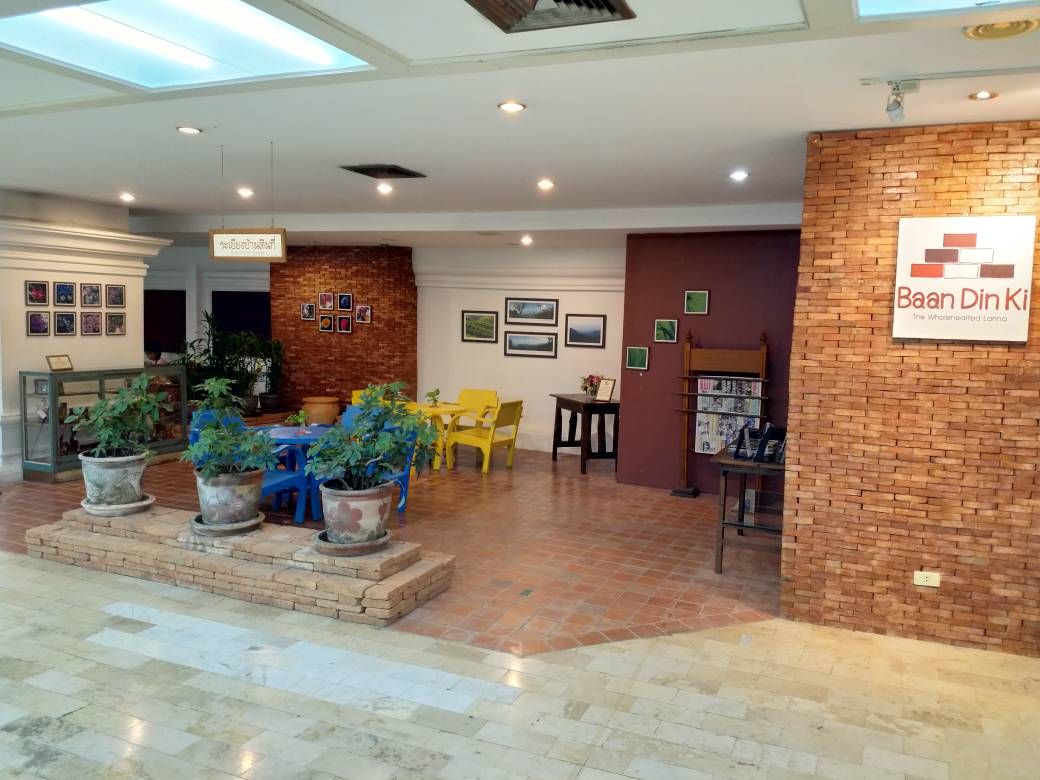 There are hangout places everywhere 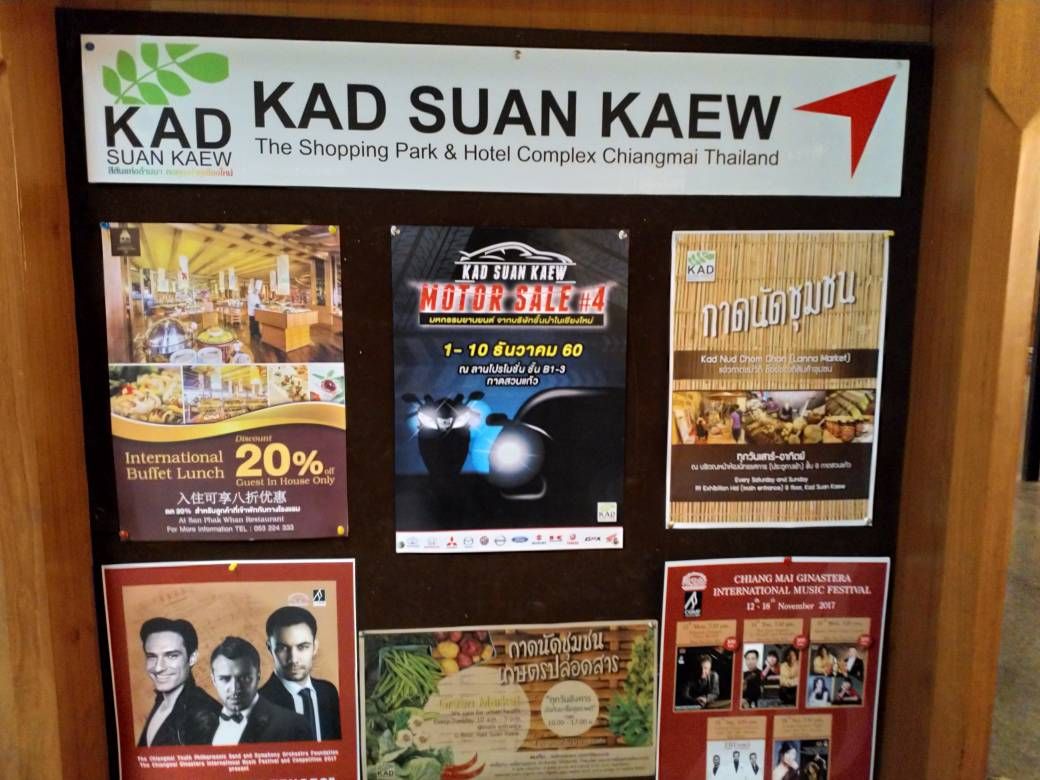 Integrated Shopping and Hotel Complex with endless events going on 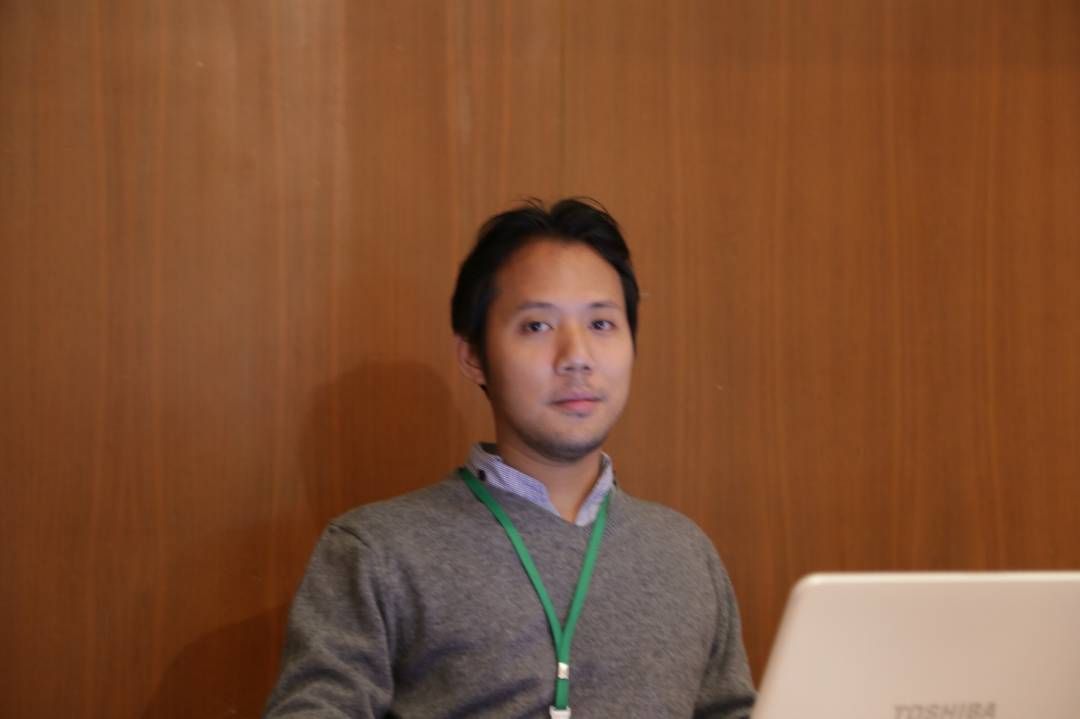 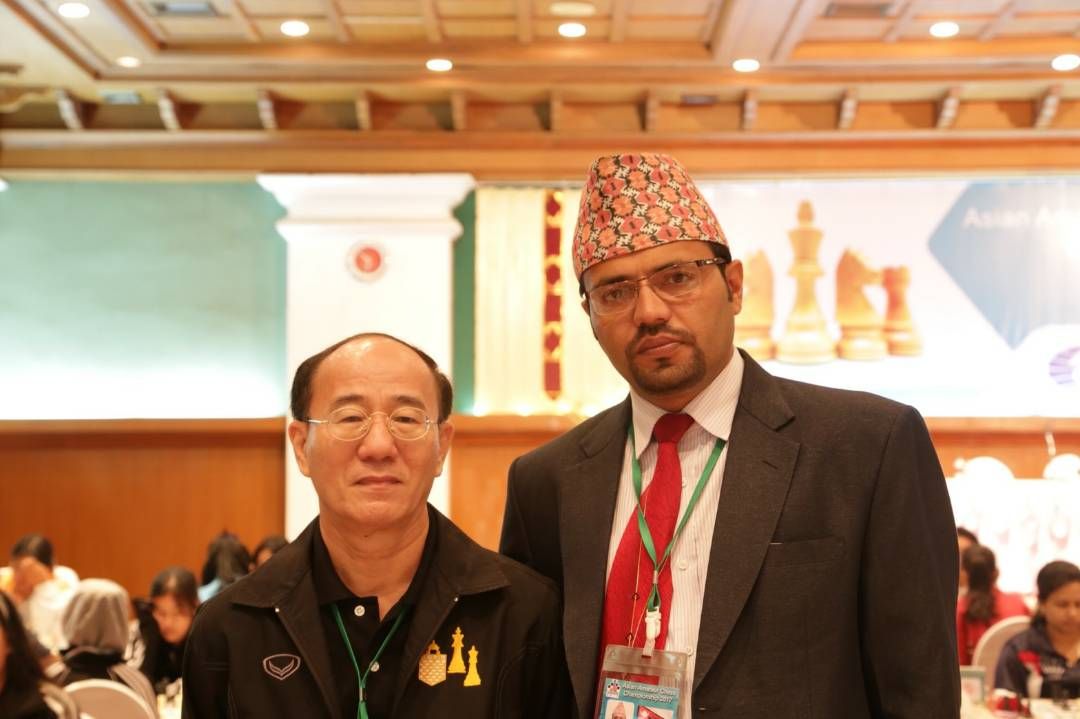 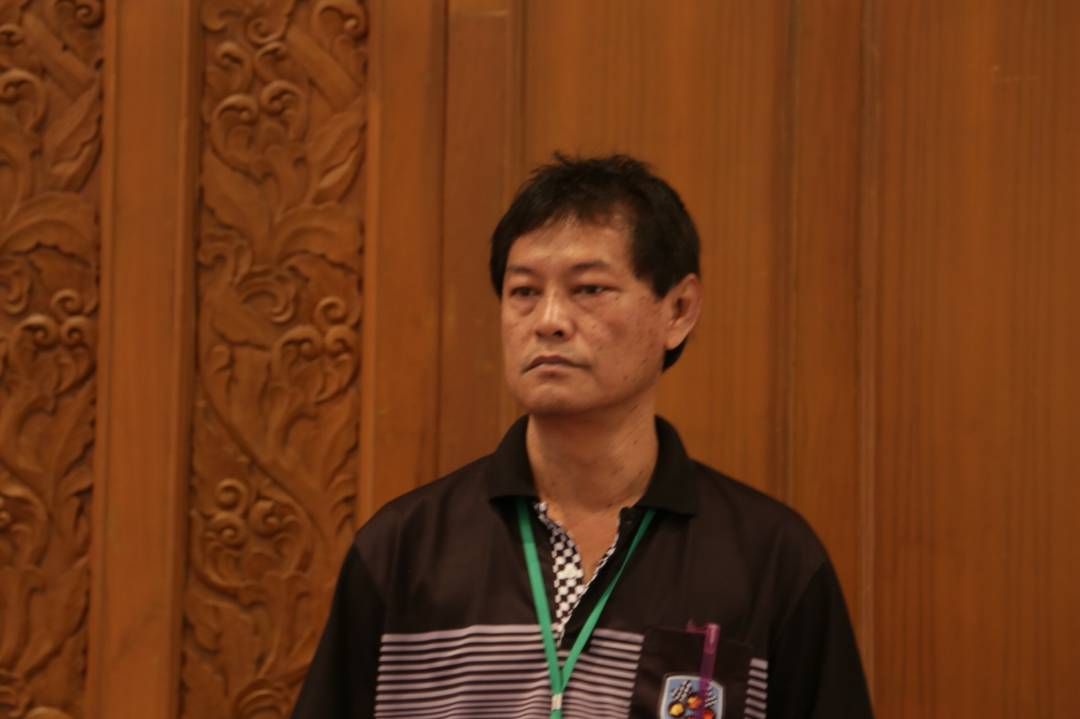 Thanaphon Thanarotrung would have been one of the favourites to win if he did not opt to be an arbiter!

In round five of the championships, potentially decisive encounters took place. On top boards, the Open saw top seeded Japanese Ryo Shiomi who had earlier dropped half a point against the unfancied Malaysian Emir Rusyaidi Ahmad Nazari play the leader, Singaporean Matthew Lau Ende while the Women saw the impressive and heavily favoured Filipino Loreshyl Cuizon take on the only other woman with 4/4, India's G Sandhya. When the dust cleared, Shiomi was again the leader, but now joined in a four way tie on 4.5/5 by Mongolia's Dagii Gaandulga who had very much the measure of UAE's Sultan Al-Zaabi in Board 2, Kyrgyzstan's Islam Baiysnov who beat his fellow Japanese Satoshi Hirao, and Uzbekistan's Bakhtiyor Dhumaev who beat Kazakhstan's Abdikhadir Yakhiyayev. 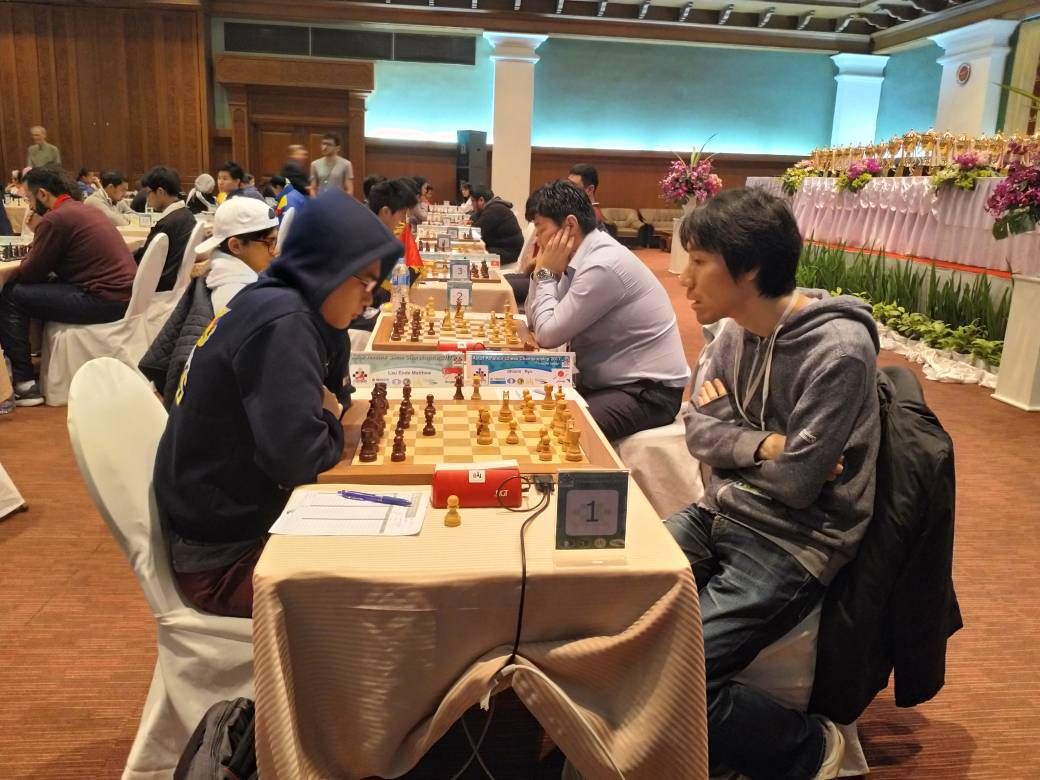 There is however only one leader now in the Womens, Cuizon, now on 5/5 and a point clear. She however had a real fight with Sandhya who after fighting back from a worst position then managed to overpress trying to win a rook endgame where she really could not lose. 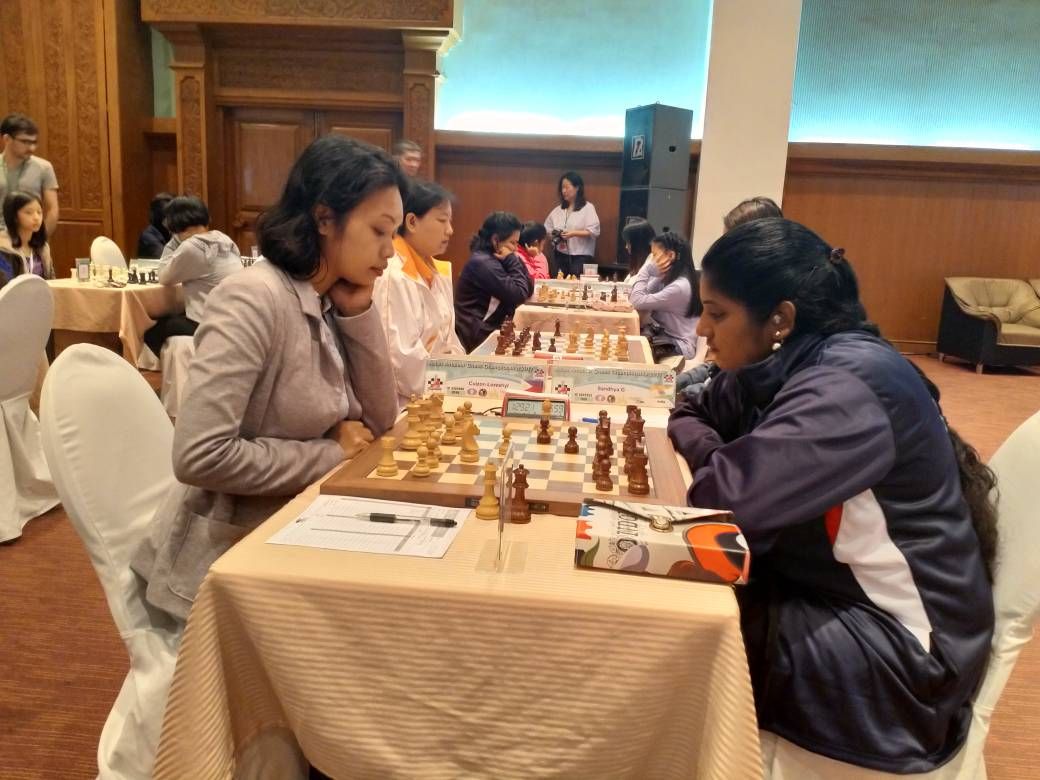 Top board clash between Cuizon and Sandhya

Djumaev Bakhtiyor scored a win against top seed Ryo Shiomi and then backed it up with another win over Ganduulga Dagii. He currently leads the open section with 6.5/7.

In the women's section Loreshyl Cuizon is the leader with a half a point margin over G. Sandhya. She is currently on 6.0/7.

The previous day, Sunday 26 December saw the visit of the very hands-on TCA President Kittirat Na Ranong who as always shunned the limelight and preferred to engage and encourage both the tournament officials and the local chess community. It was also an opportunity for TCA board members to visit the event and hold a meeting to address current matters. 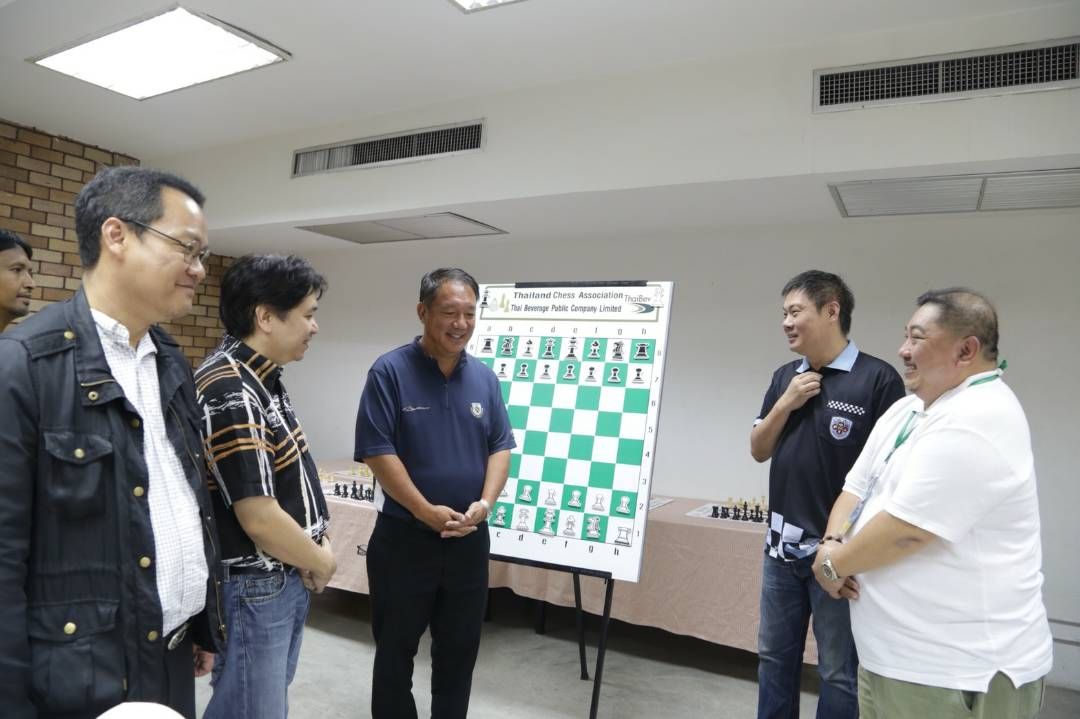 Chiang Mai, Thailand will be the host of the Asian Youth Championships from 1-10 April 2018 and this will be followed soon after by the long running Bangkok Club Open Championship which will be held in Pattaya this time around and so there is something for all chess lovers who wish to take full advantage of wonderful experience that is playing chess in Thailand!