Asian Continental: Can Sethuraman do in 2019 what he achieved in 2016?

Sethuraman S.P. caught Abhijeet Gupta in a superior knight versus bishop ending, and won with a fine display of endgame technique. Murali Karthikeyan overlooked a tactical point and suffered yet another defeat at the hands of  Rinat Jumabayev of Kazakhstan. S.L.Narayan's scything king-side onslaught in Sicilian Sveshnikov proved too much for Vidit Gujrathi. Elsewhere, in the women's section Bhakti Kulkarni went down to Phạm Lê Thảo Nguyên after a grinding 89 moves duel. Bhakti suffered her second defeat in a row. It was round 8, the penultimate round of Asian continental open and women's championship 2019 and we now have a sole leader in Sethuraman SP of India!

Sethuraman is the sole leader in the Open Section

Sethuraman S.P. has emerged as the sole leader after beating Abhijeet Gupta in the eighth round of the Asian continental 2019. It was a Grünfeld Defense and the former was able to get into a minor pieces ending where his bishop proved superior to his opponent's knight. 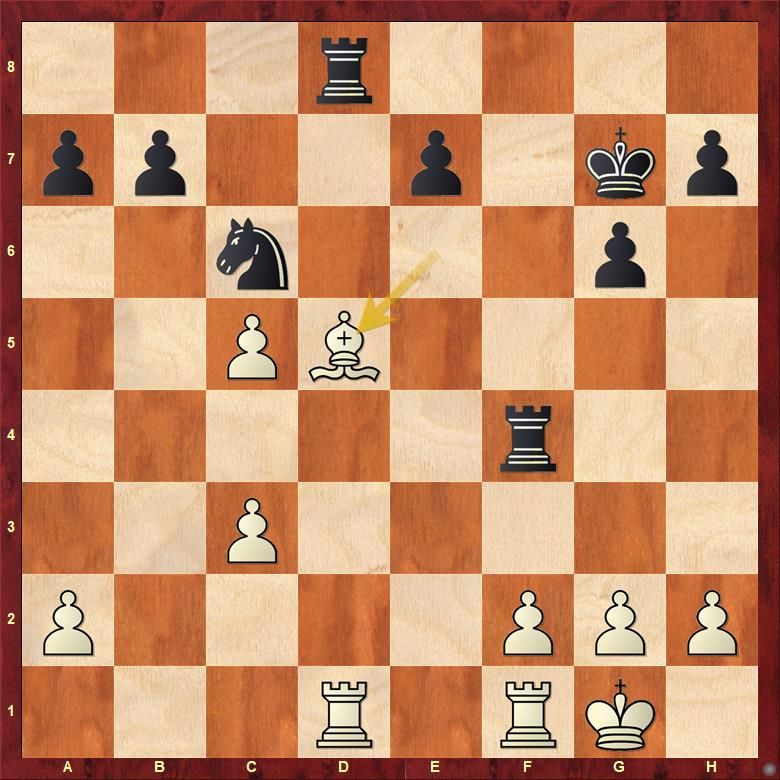 18...Kf6 19.Rfe1 Ra4 could have been a logical continuation for Black here which leaves about even chances but in the game 18...Na5?! was played - this seems to be a waste of tempo, the knight doesn't have much to do on a5 and has to be brought back soon enough. 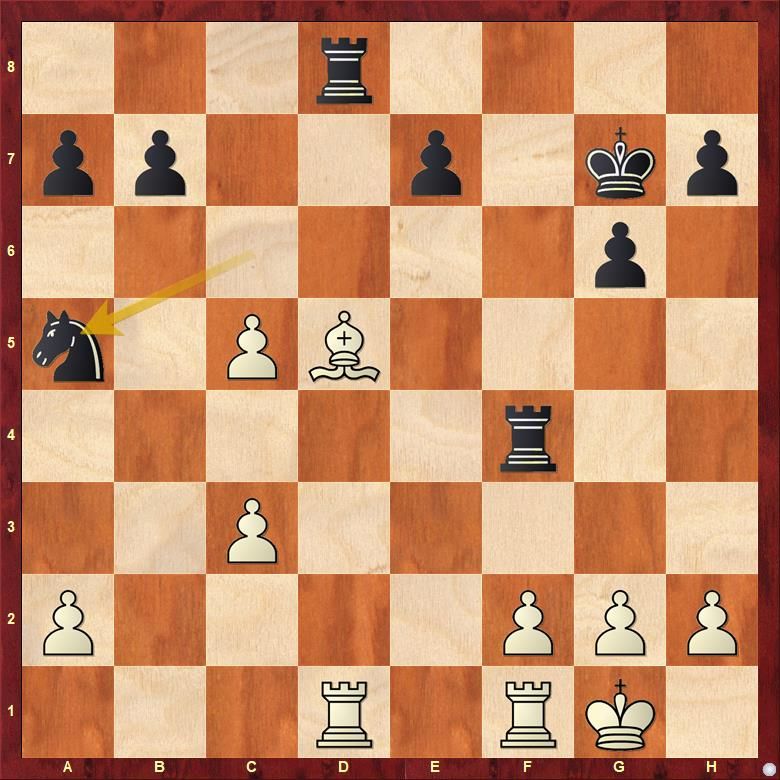 18...Na5 was a crucial mistake in Black's play - What do they say about knights on the rim?

Fast forward a few more moves, a pair of rooks have come off the board and Black's knight is starting to face issues! 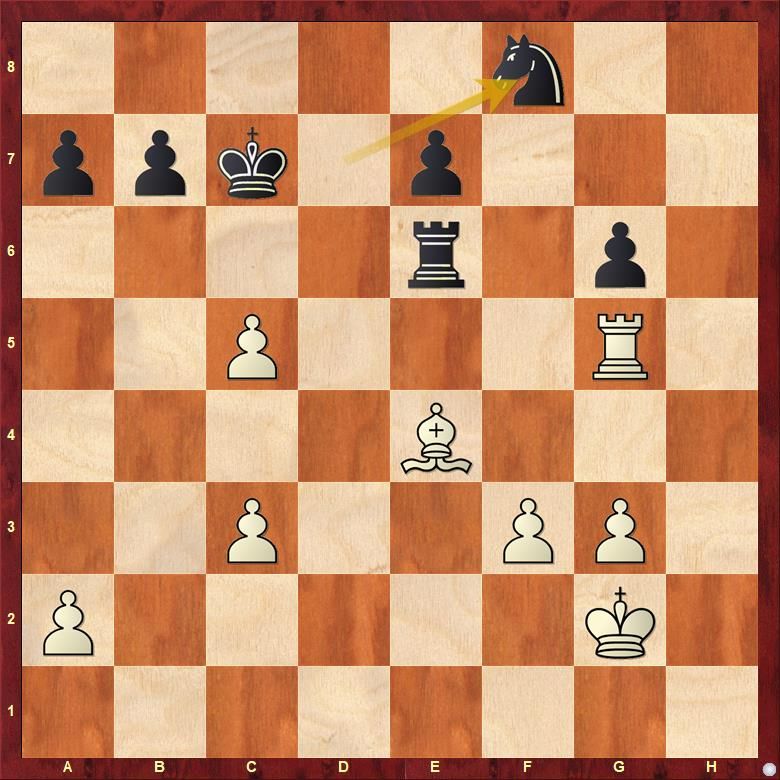 Position after 30...Nf8: The g6 pawn is a serious weakness and the black knight is tied to its defense 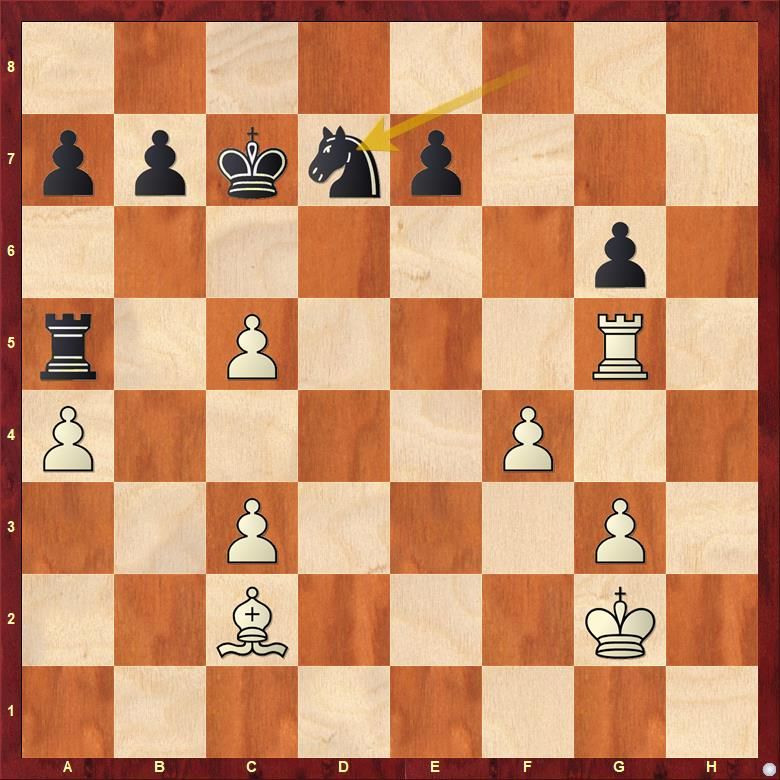 34.c6! creates amazing thrust here and indeed was played in the game. After 34...Rxg5 35.fxg5 Nf8 it was clear that White is winning - the white bishop is a better piece than that knight on f8 tied to the defense of the g6 pawn. 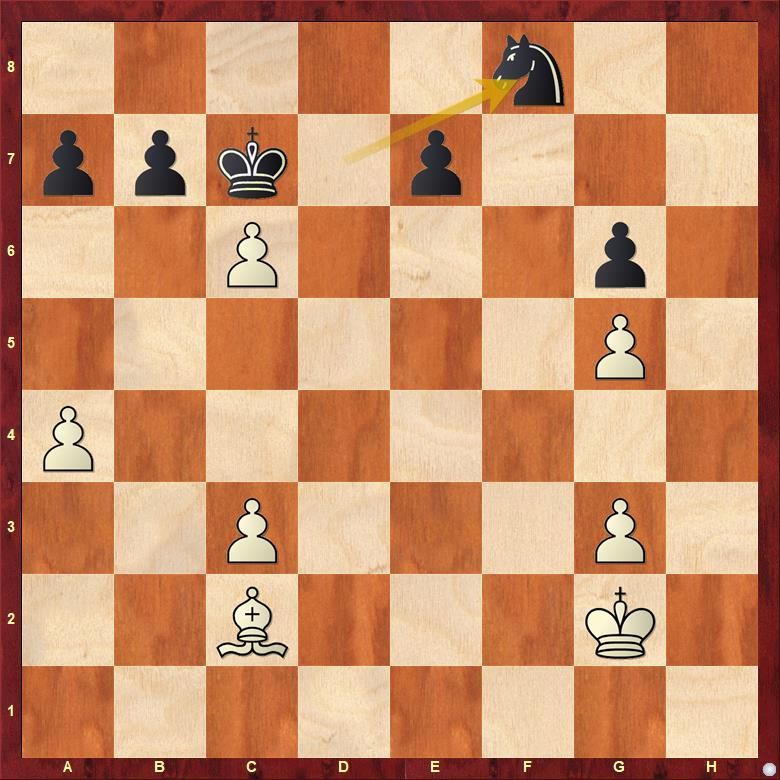 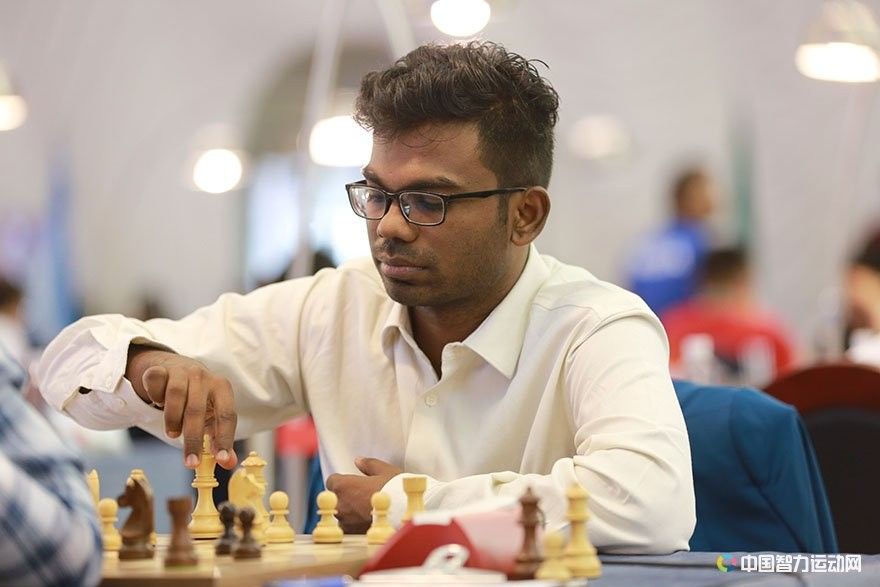 Sethuraman had won the Asian Championships back in 2016. Can he repeat his success?

Murali Karthikeyan suffered his second defeat in a row, this time against Rinat Jumabayev, surprisingly falling prey to a tactic in the middle game. 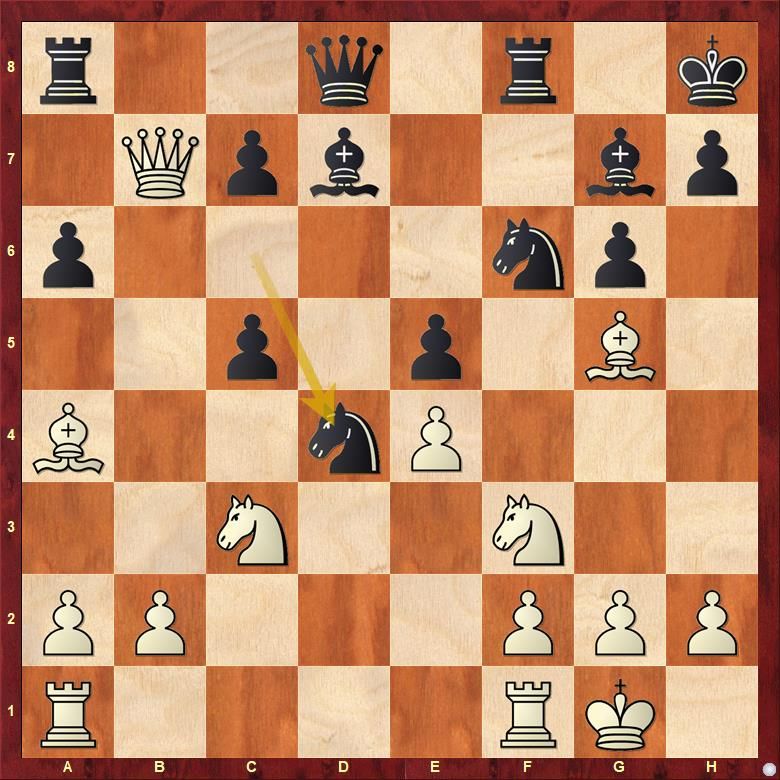 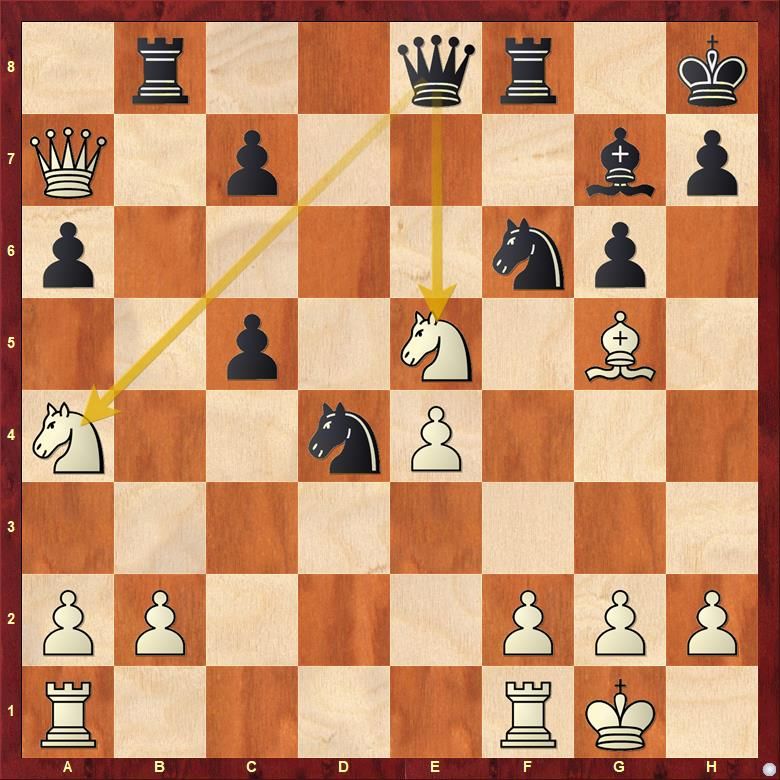 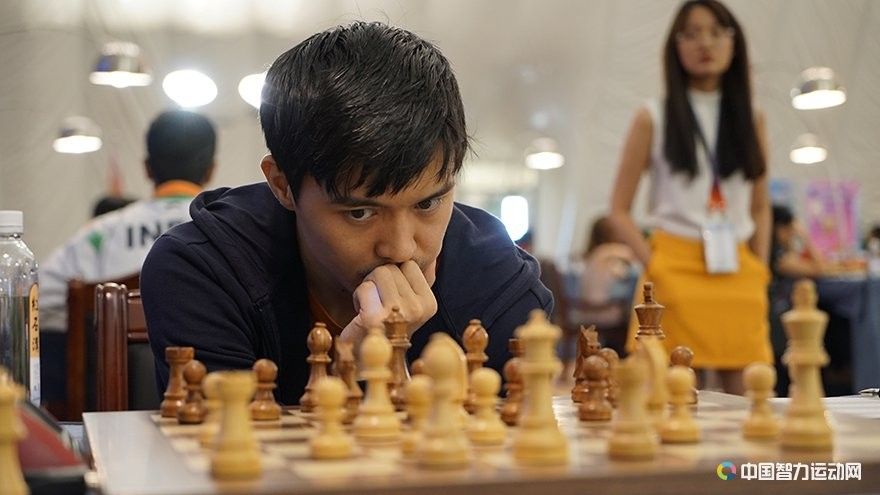 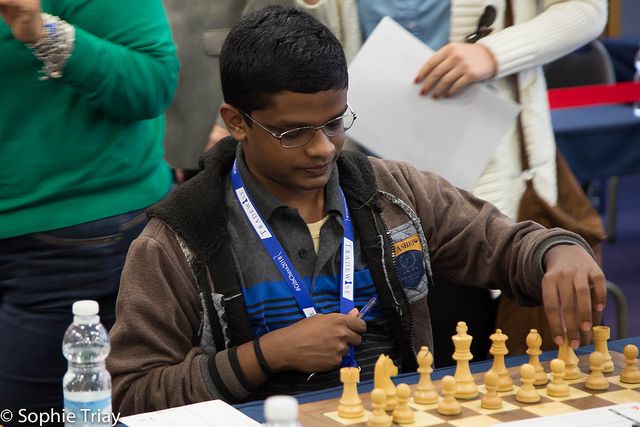 S.L Narayanan scored a win in a very tense game against Vidit Gujrathi to strengthen his chances of qualifying for the World Cup 2019 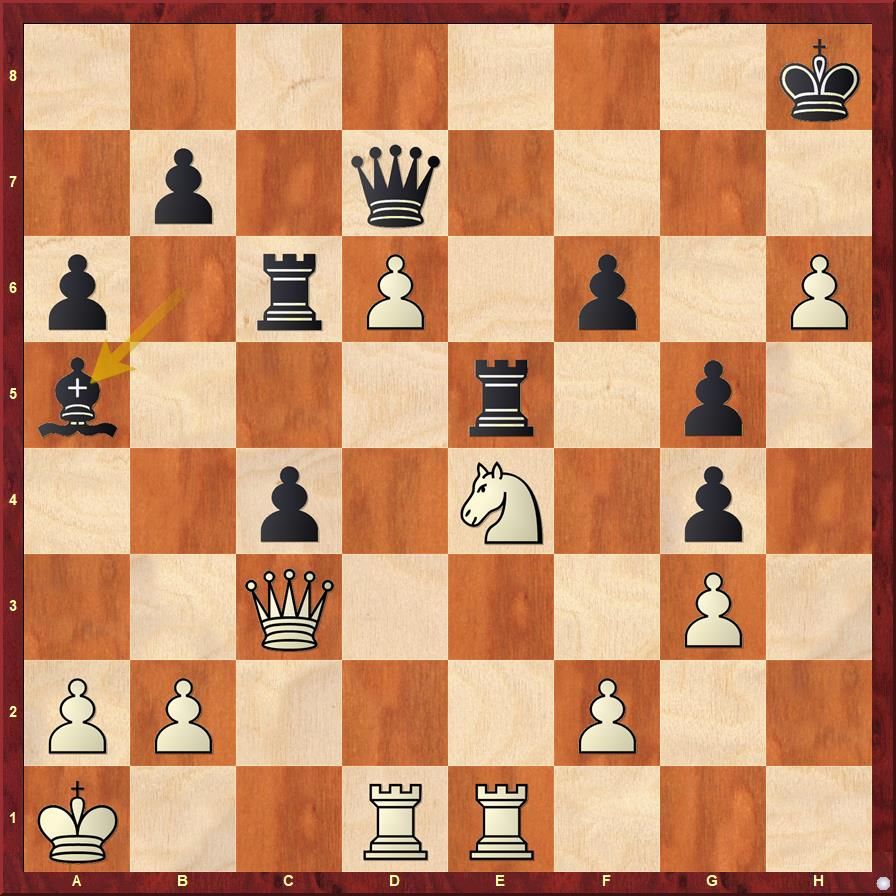 White to move and sacrifice the queen!

Narayanan came up with the fantastic move Qxa5! The queen had to be taken and after Nxf6, the knight, rook, d6 and h6 pawns create a deadly attack against the Black king. The end was very attractive!

Bhakti Kulkarni went down yet again and this time to Phạm Lê Thảo Nguyên in the penultimate round of the event. In what was a tooth and nail fight, fortunes changed hands multiple times, but in the end it was the Vietnamese International Master who came out strong. 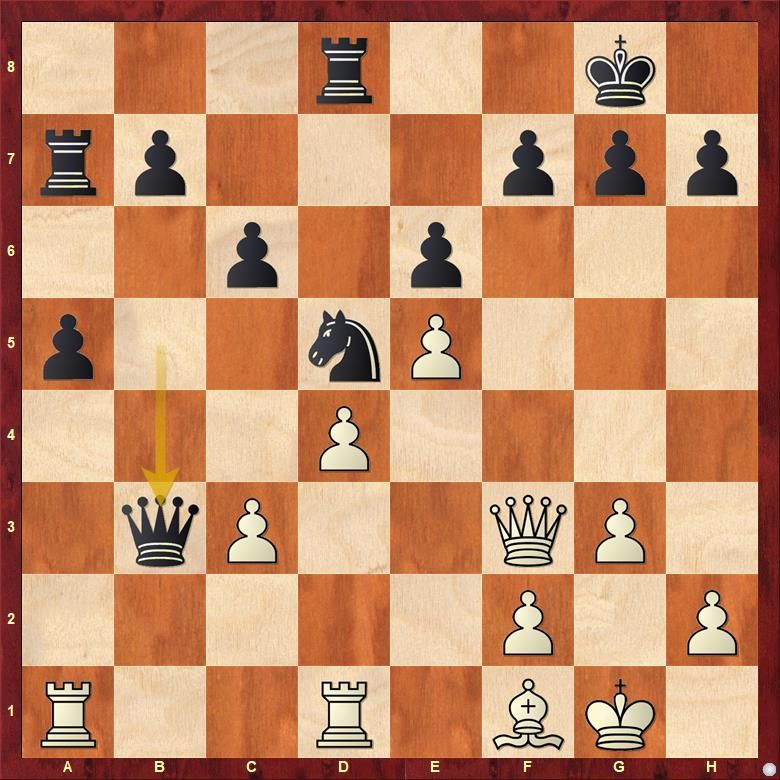 Black already seems to have an edge in the above position with his queen-side pawn majority ready to march down the board. White took swift measures with 27.Rdc1 a4 28.Bd3 g6 29.Bb1 a3 30.Ba2 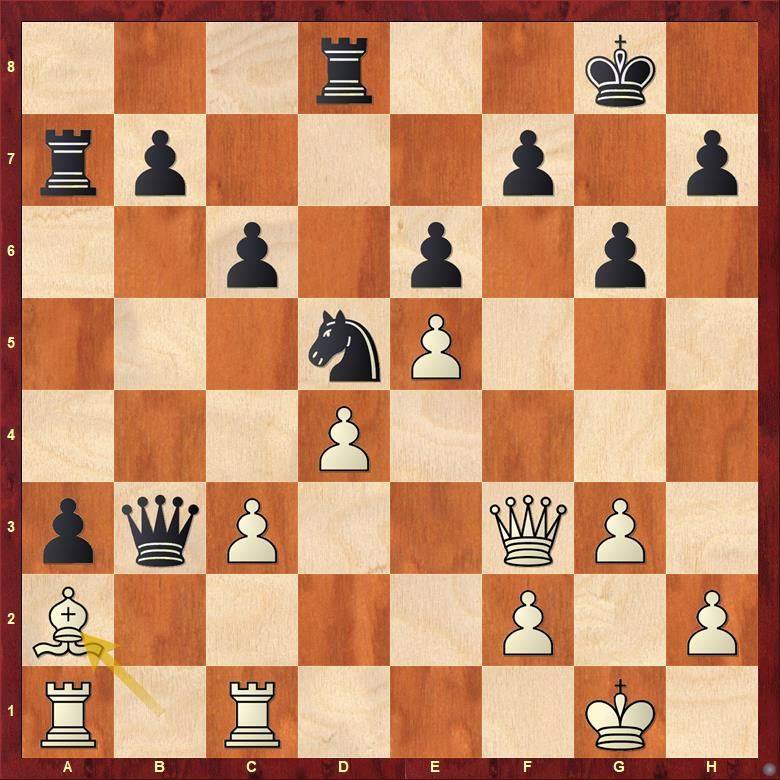 Next, pragmatic steps were taken to create chances on the other side of the board, 30...Qa4 31.h4 Qa5 32.h5 Rd7 33.hxg6 followed, and now the logical move would have been 33...fxg6, capturing on g6 with the f-pawn and opening up the seventh rank for the rooks. But Black went 33...hxg6, this brought back balance as now White can create effective counter-play with Qg4, Kg2 followed by Rh1 etc. 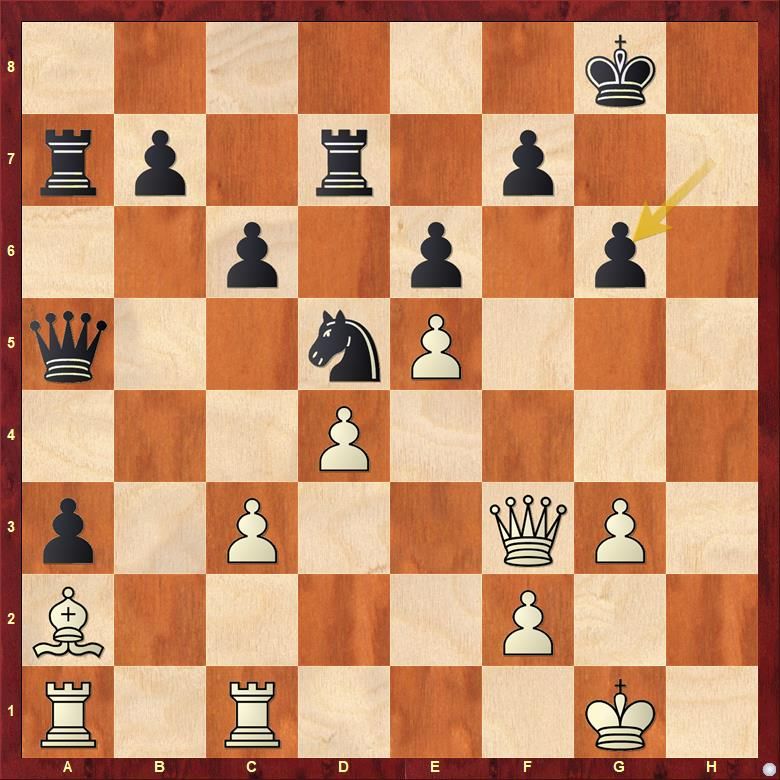 After 33...hxg6 White can create strong play along the open h-file

The game continued 34.Kg2 Qd8 35.Rh1 f5, In this position White visibly has a strong initiative on the king-side. 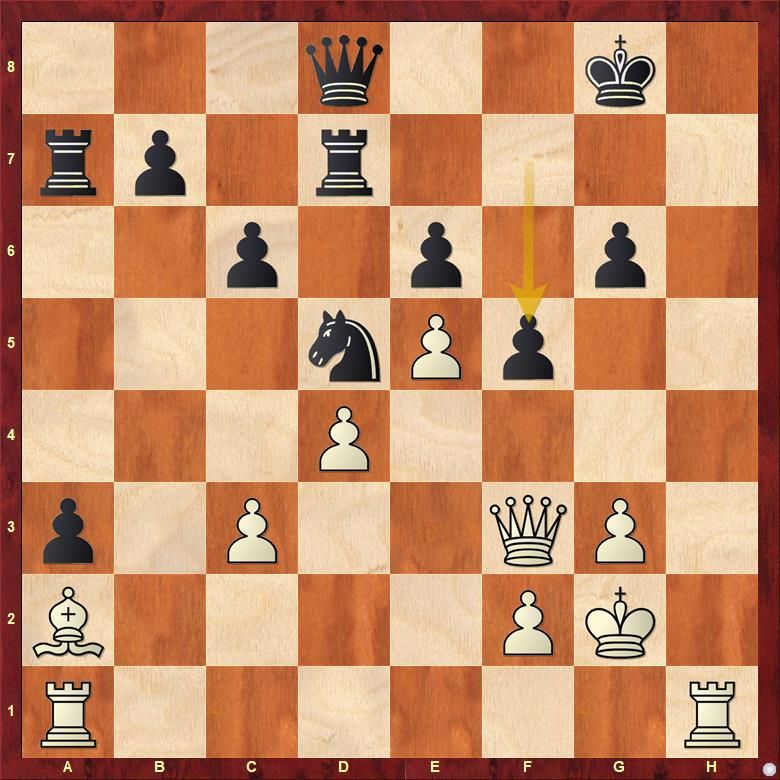 In the game White took on f5 en passant but this was a mistake. Instead 36.c4 Nb4 37.Qe3 Qe8 or simply 36.Rh6 would have been the correct way to push for the advantage. 36.exf6 allowed 36...Rf7 and then came another turning point. 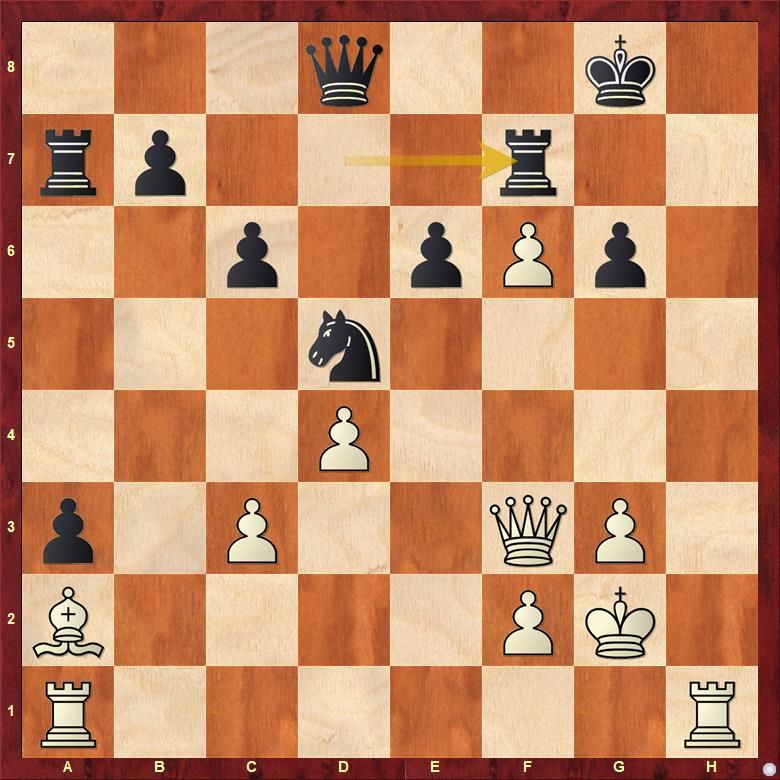 White's best chance now lay in simplification with 37.Bxd5 Qxd5 38.Qxd5 exd5 39.Ra2 followed by Rha1 leading to an even position. But in the game 37.Qd3 was played and Black replied 37...Qxf6 seizing the initiative. 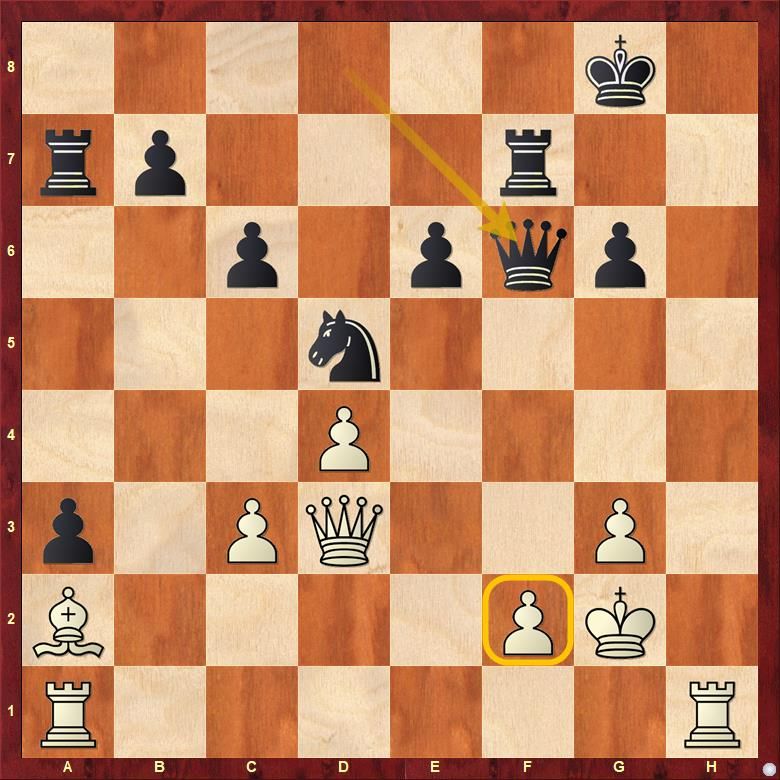 After 38.f4 Qf5 39.Qxf5 exf5 Queens were traded and a few more moves later the following position was reached: 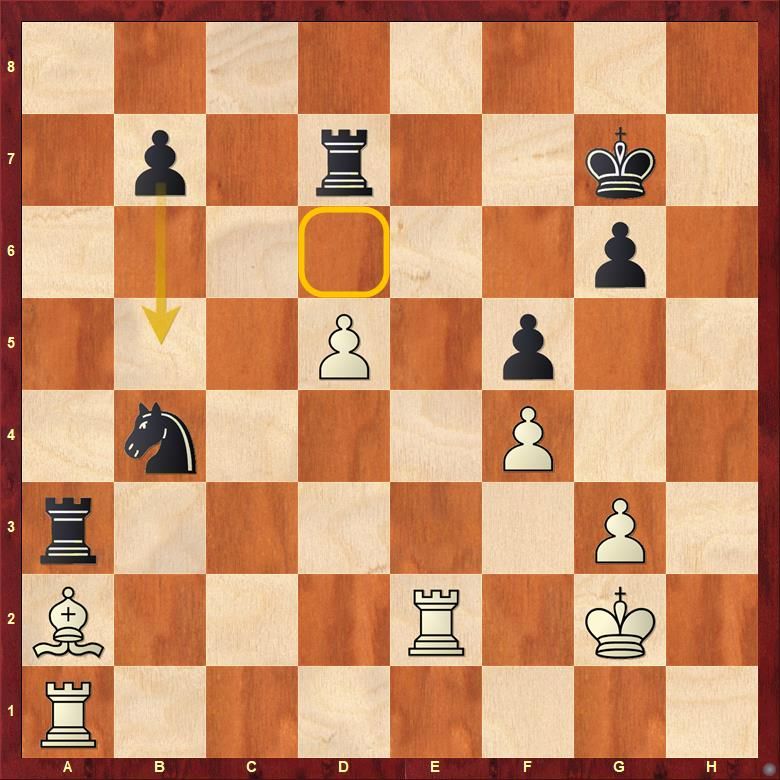 After 46.cxd5: Black is ready to blockade White's d5 pawn with Rd6 and his own b-pawn is ready to roll over!

Eventually, the minor pieces too got exchanged and a rook-pawn ending was reached where Black had an extra passer on the b-file. 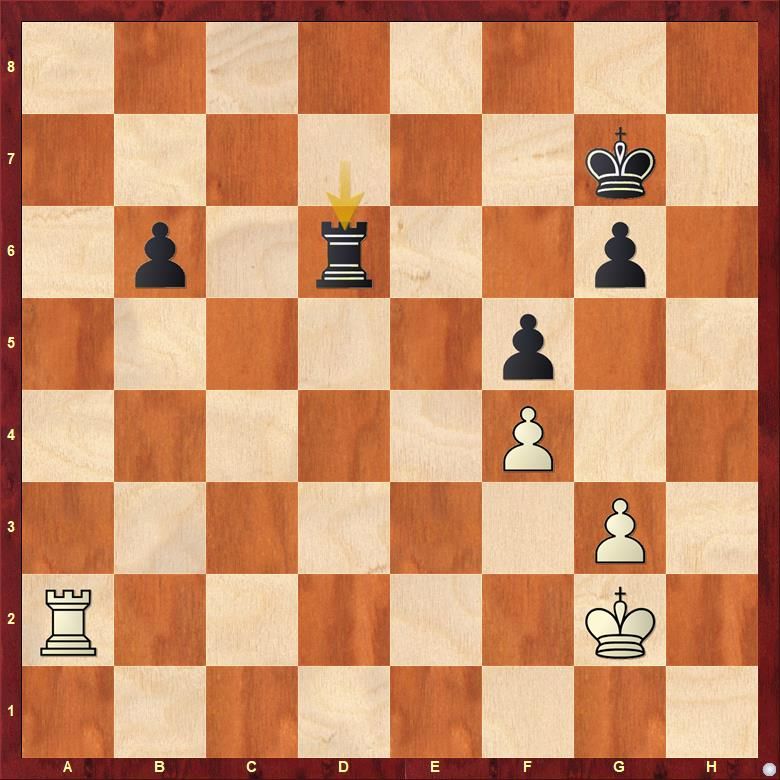 It was now only a matter of technique for Black to convert this position which was slowly but surely done in the game. Bhakti fought hard but had to call it quits on move 89 and with this loss she slipped to the sixth spot on the rank-list.

In spite of these two losses in round seven and eight, Bhakti still remains the best performing Indian player at the event. Next best is R. Vaishali, who scored a win over Gulmira Dauletova. 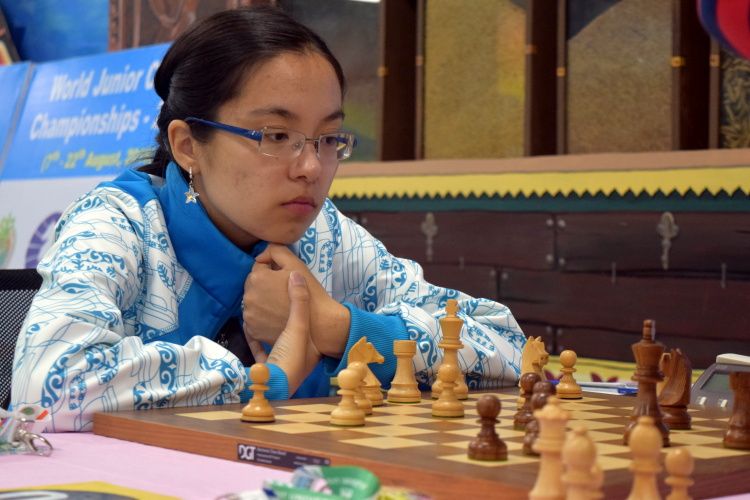 Dinara Saduakassova is the sole leader of the event with 7.0/8 going into the final round