SBI Life Chess Festival in Mumbai was a unique tournament organized by Praful Zaveri with one round every day in the evening. Children didn't have to miss their school and could still enjoy the tournament. Grown ups could enjoy chess after a hard day at work. FM Sajandas Joshi made a comeback to chess after many years and was leading the tournament, but in the fateful final round he lost to Atul Dahale, while Amardeep Bartakke managed beat Gopal Rathod. Thus Atul and Amardeep were tied at the top with 7.5/9, but the latter was adjudged as the champion due to a better tiebreak.

In an amazing turnaround, 3rd seeded Amardeep Bartakke of Railways won the 5th edition of SBI Life Chess Festival of Russia FIDE Rating Chess Championship, which concluded at the Cultural Centre of Russia. The unexpected results of the 9th round encounters made a mockery of the all the predictions. 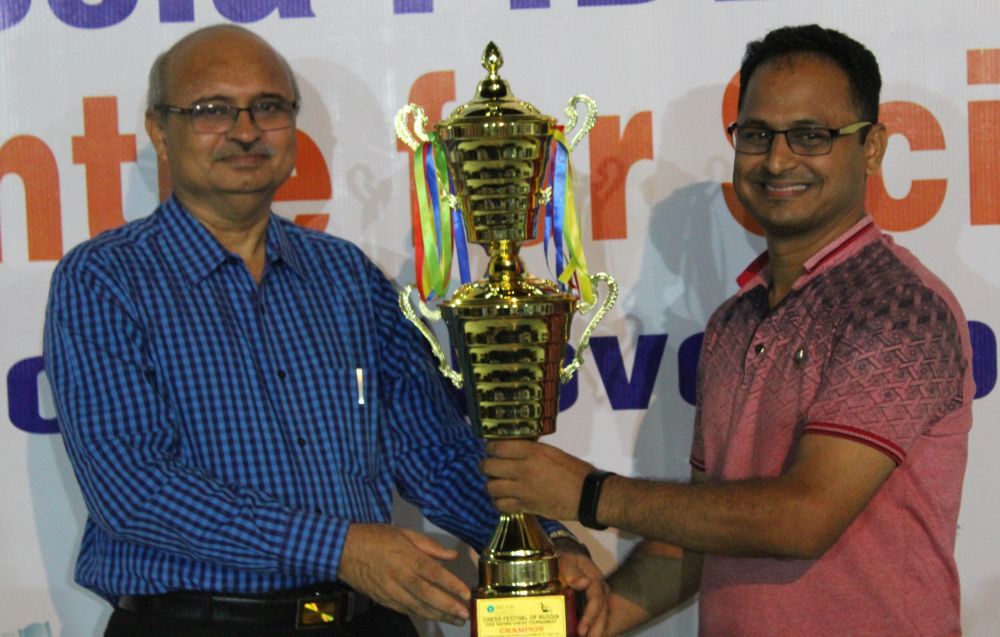 Amardeep Bartakke won the SBI Life Chess Festival of Russia. With it he took home Rs.25,000 and this glittering trophy. But, we are getting ahead of ourselves. Let's rewind to the final day of the event. 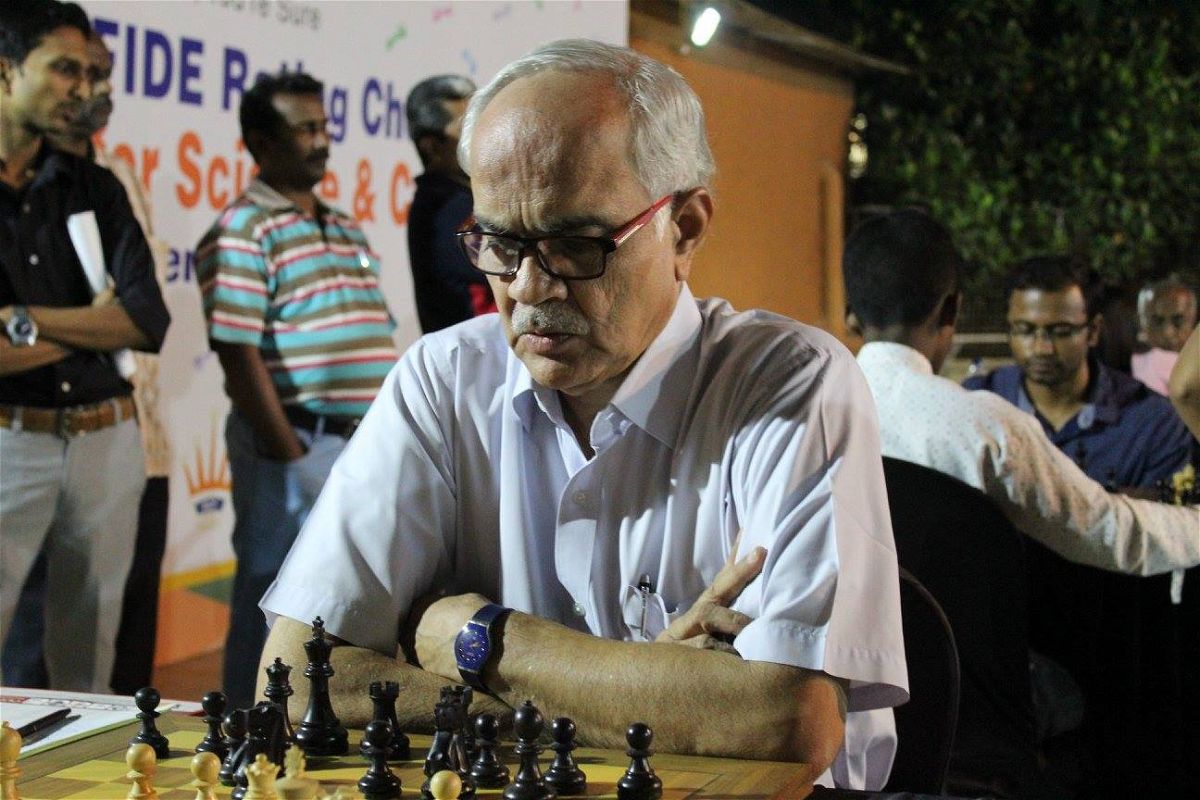 FM Sajandas Joshi was sitting pretty at the top with a cushion of half-a-point and was expected to clinch the title. However, in a must-win situation, top-seed Atul Dahale, who was trailing by a half-a-point, came out all guns blazing in a Slav Defense opening. He played the pawn sacrifice variation in the Classical Slav. FM Joshi was equal to the task and defended accurately and it appeared that his extra material and better position would determine the outcome in his favour, but to everybody's surprise, a dubious knight sacrifice on move 25 turned the tide in favor of Dahale and thereafter it was just a matter of applying correct technique. FM Joshi resigned on move 48. 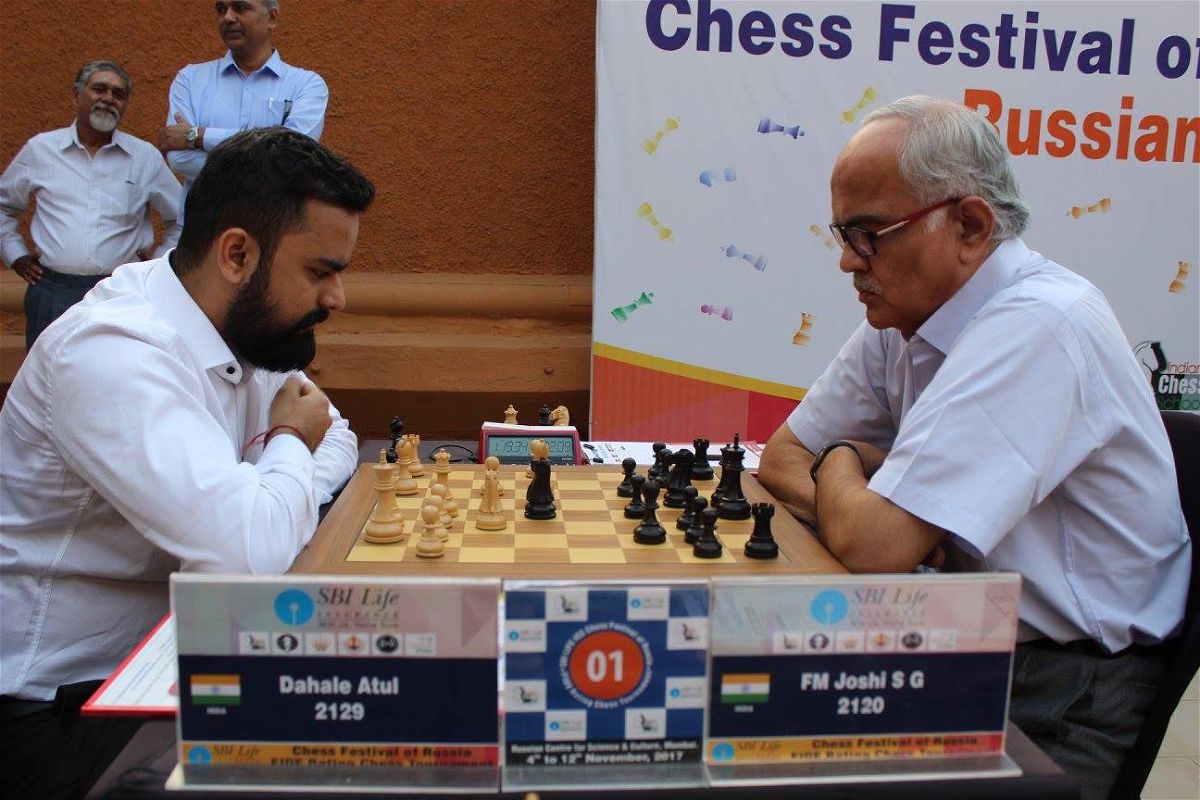 It must be mentioned that Atul Dahale managed to score 7.5/9 without playing the second round. So in effect his score was an impressive 7.5/8. We asked Atul to send us the game against Sajandas Joshi with his annotations. He obliged. Here is the battle with some instructive notes by Dahale:

Luck also deserted FM Joshi as the result on board 2 did not go his way - Gopal Rathod got a winning position against Amardeep Bartakke after 30 moves from the White side of Sicilian Defense game but was not able to find the correct continuation. Thereafter the game appeared to be steering towards a draw but a wrong pawn push on move 43 changed the equation of the game in favor of Amardeep. Bartakke played immaculately to score a full point. This victory of Amardeep and Atul Dahale propelled them to top with a score of 7.5/9 points but the tie-break favored Amardeep, who was declared the champion.

Here's the final round game annotated game by the eventual winner Amardeep Bartakke: 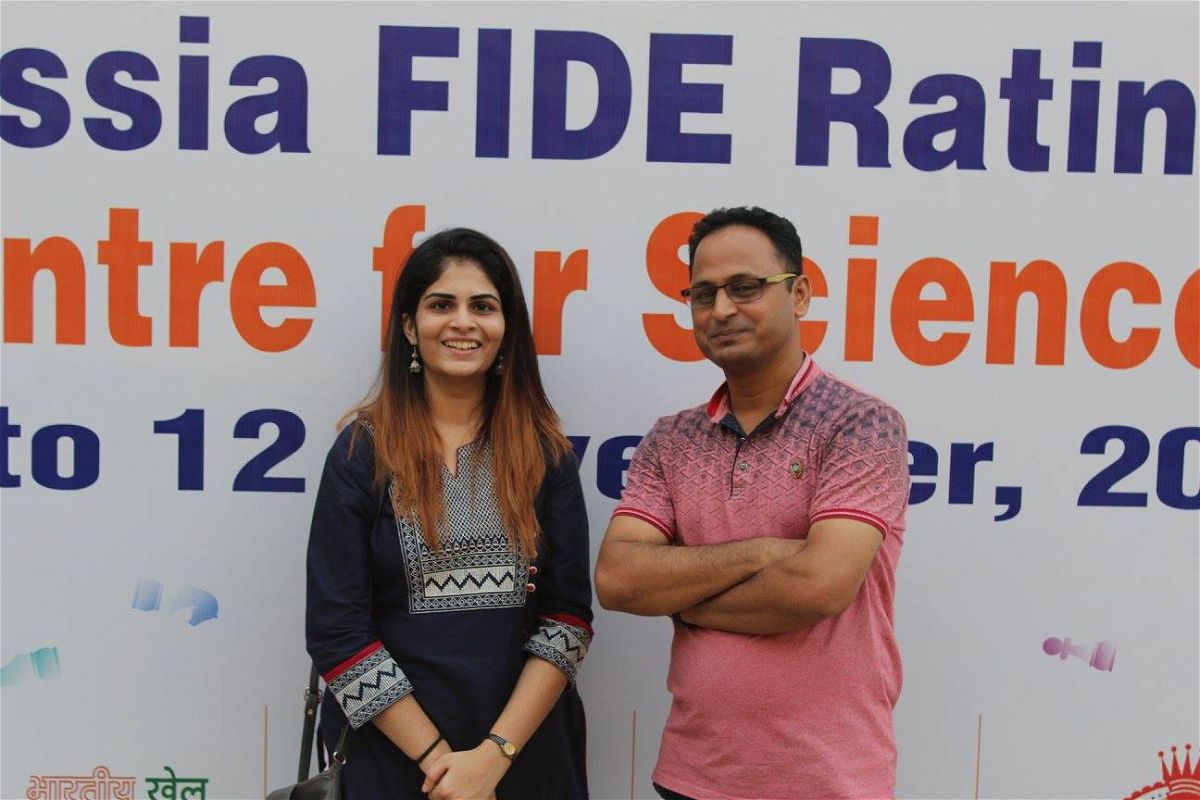 Playing a game or not, Amardeep is always in a good mood! Here is seen with local player Vrushali Deodhar. 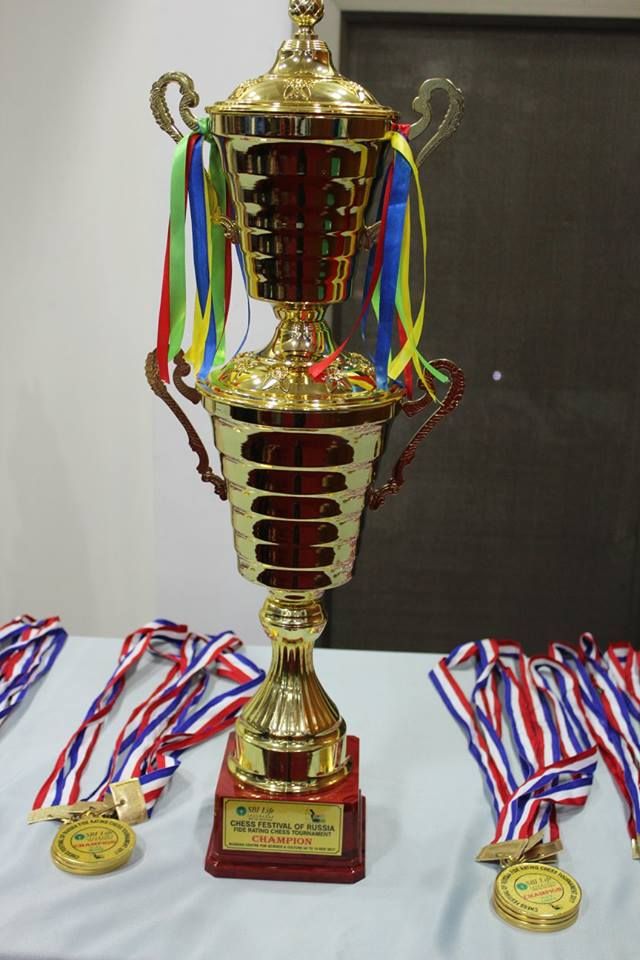 The glittering trophy that was awarded to the winner! 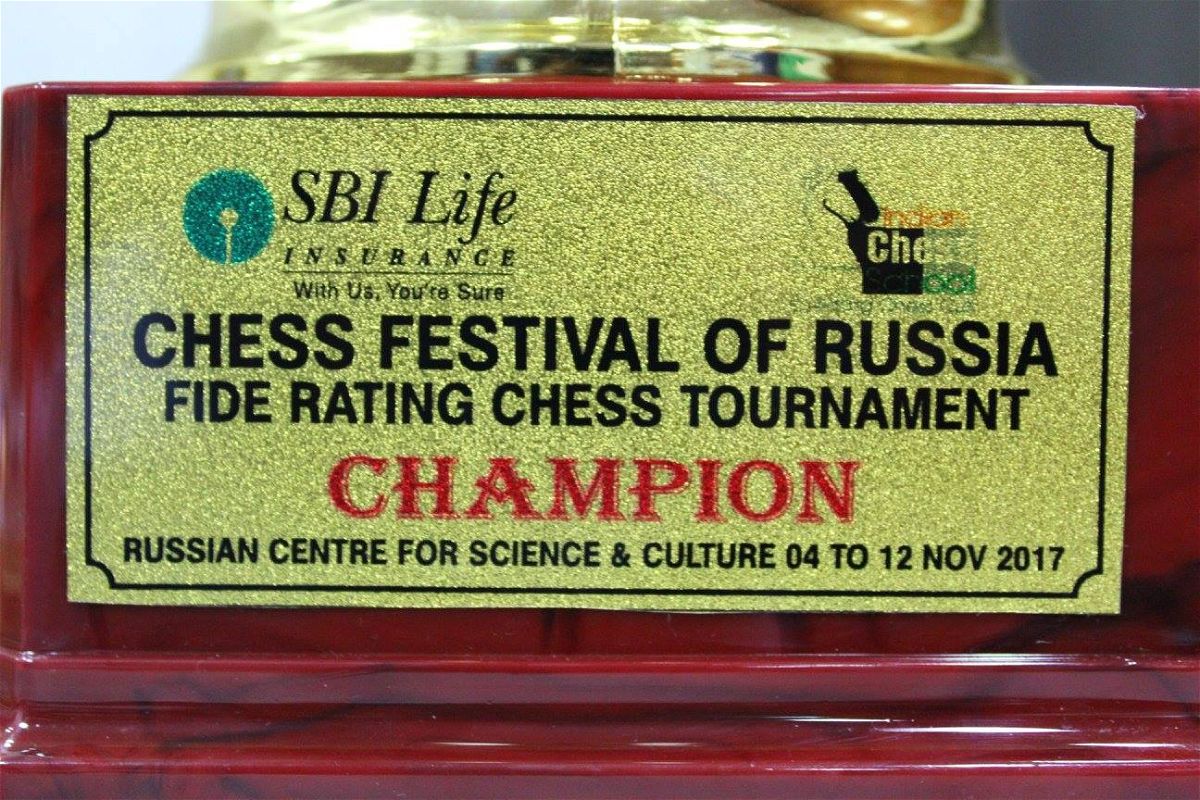 Amardeep bagged the glittering SBI Life trophy and a purse of Rs.25,000/- whereas Dahale got Rs.20,000/- FM Sajandas Joshi had to be content with 3rd place and a prize of Rs.15,000/- Mumbai University player, Sanjeev Mishra capped his fine run with a 4th place and a prize of Rs.10,000/- while a surprise was created by 12 year old, Aniruddha Potawad, who secured 5th position after scalping 6th seeded Tejas Joshi to win Rs.5,000/- The prize distribution ceremony was presided over by Dronacharya Awardee and FIDE Chess Trainer, Raghunandan Gokhale. A total of 10 cash prizes amounting to Rs. One Lakh and 24 medals were awarded to the the age-category winners. Prizes from fifth to tenth spots all received Rs.5,000. The event was conducted by Indian Chess School in association with Cultural Centre of Russia. 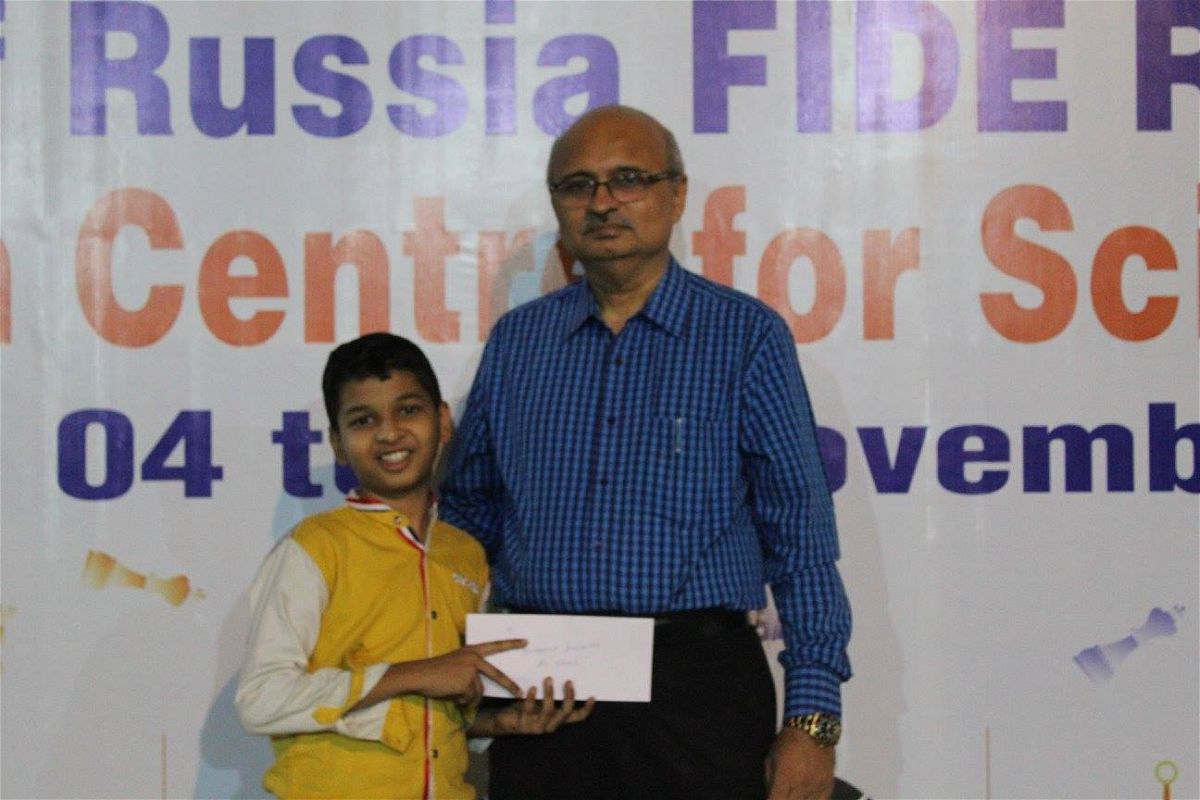 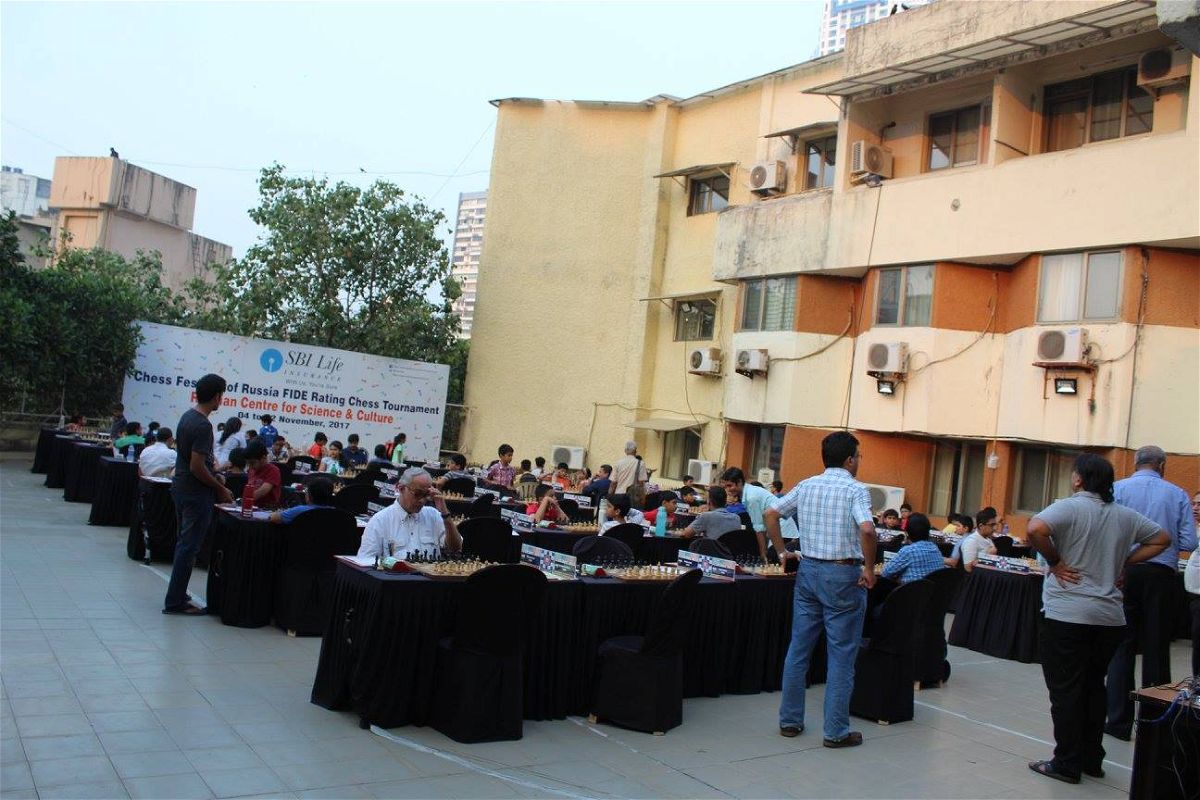 The rounds were held in the terrace of Russian Centre of Science and Culture. Everyday one game which began at 5.30 p.m. This meant that kids didn't have to miss their school! 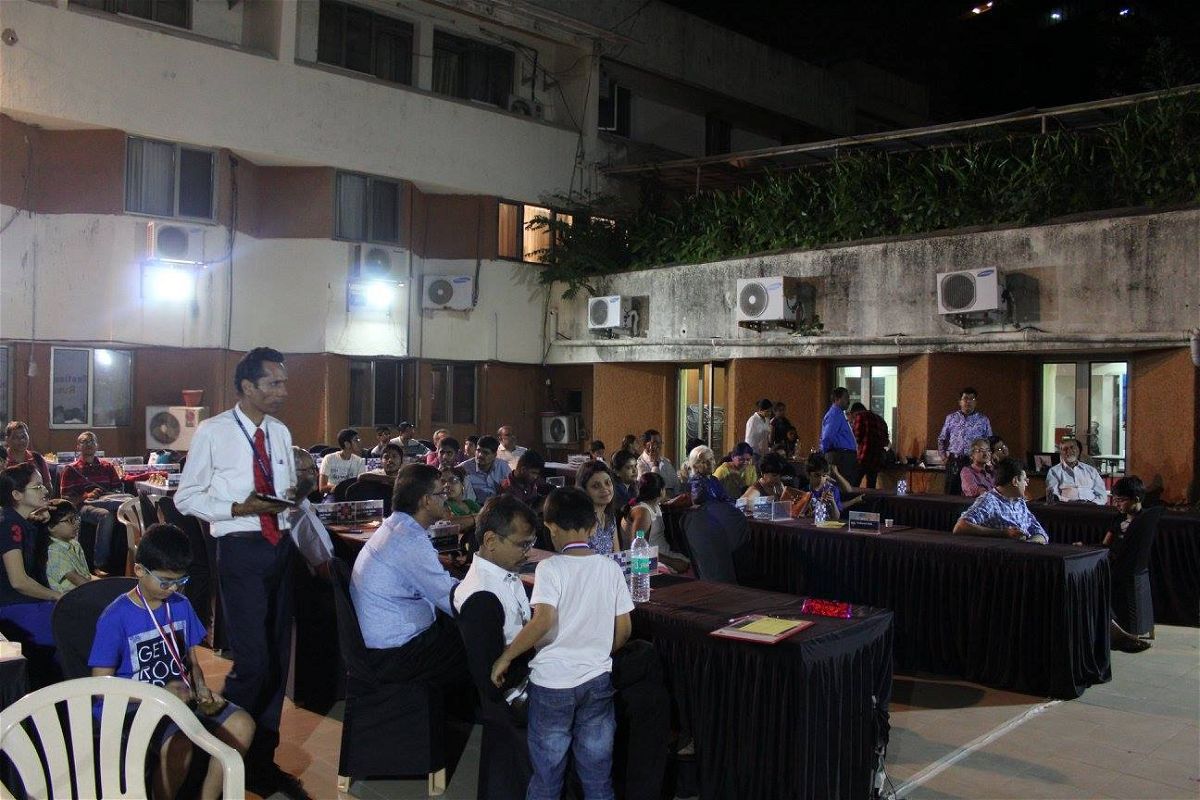 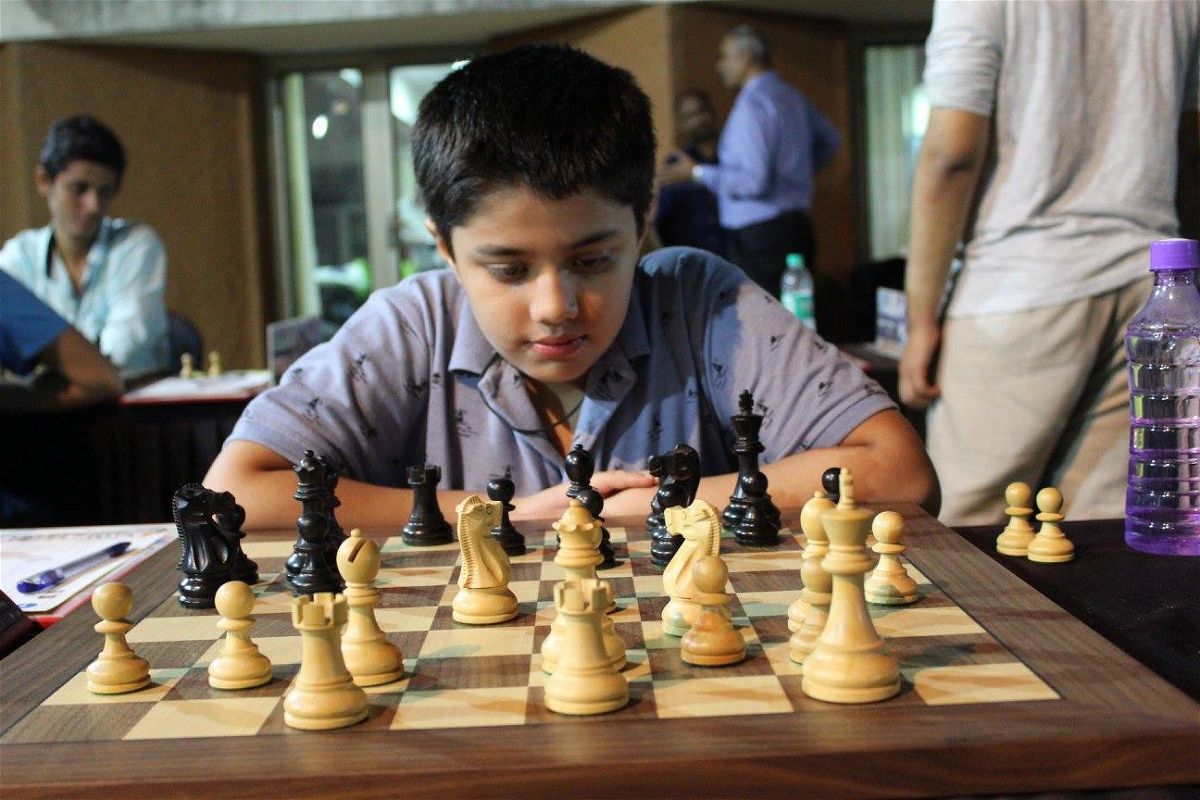 Enchanted by the 64 squares! 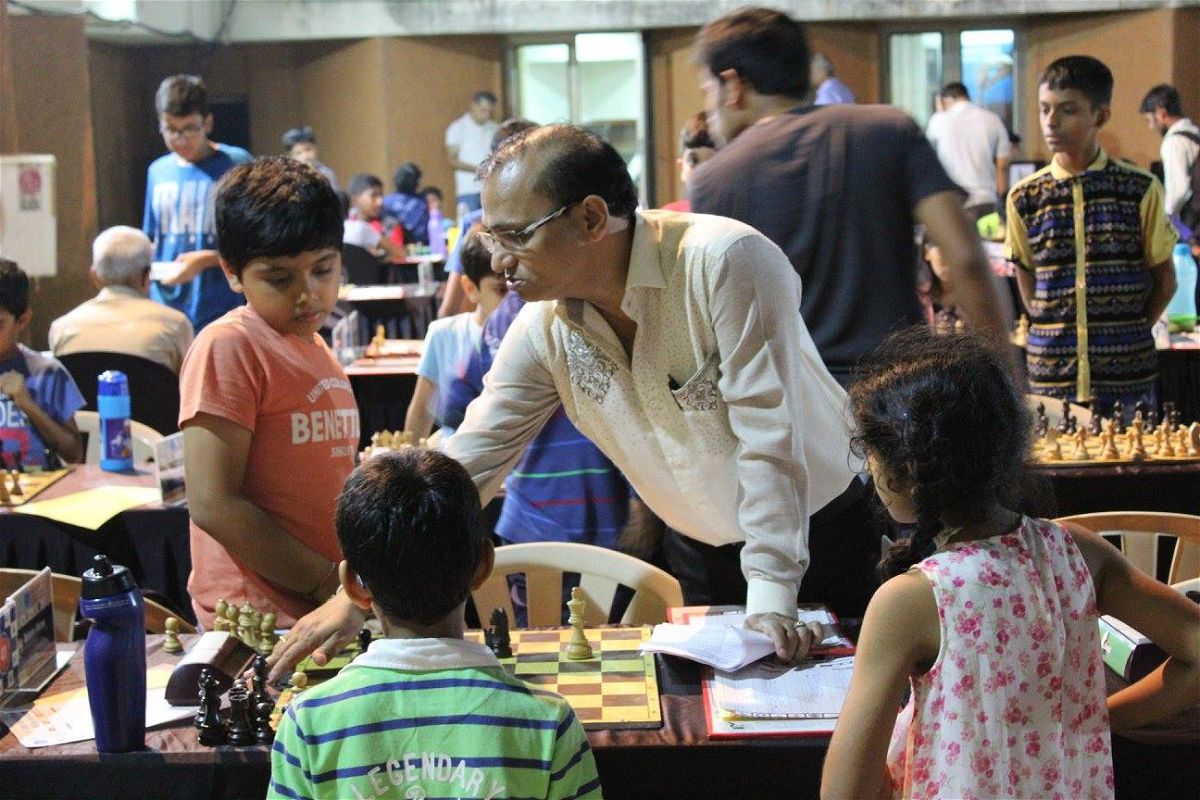 Prem Pandit, the chief arbiter of the event, did a commendable job 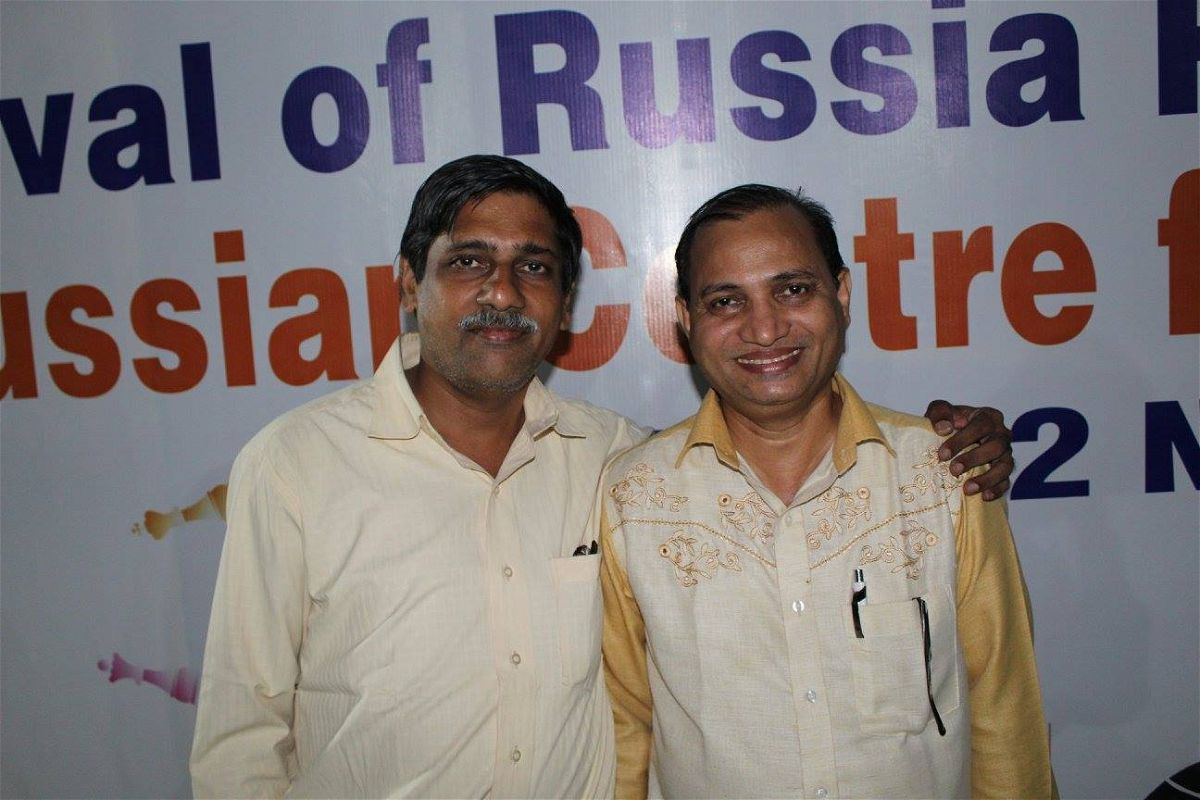 Sandesh Nagarnaik with Prem Pandit. Sandesh was responsible for the live transmission of the games. 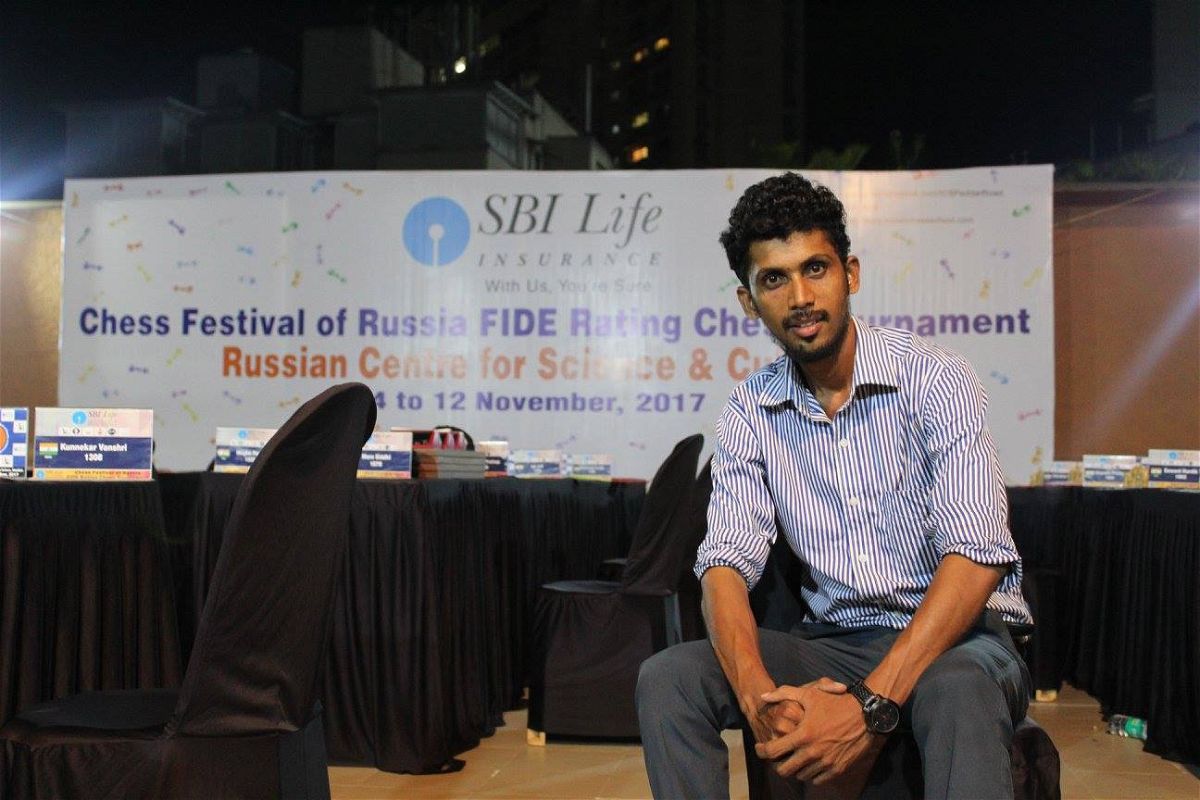 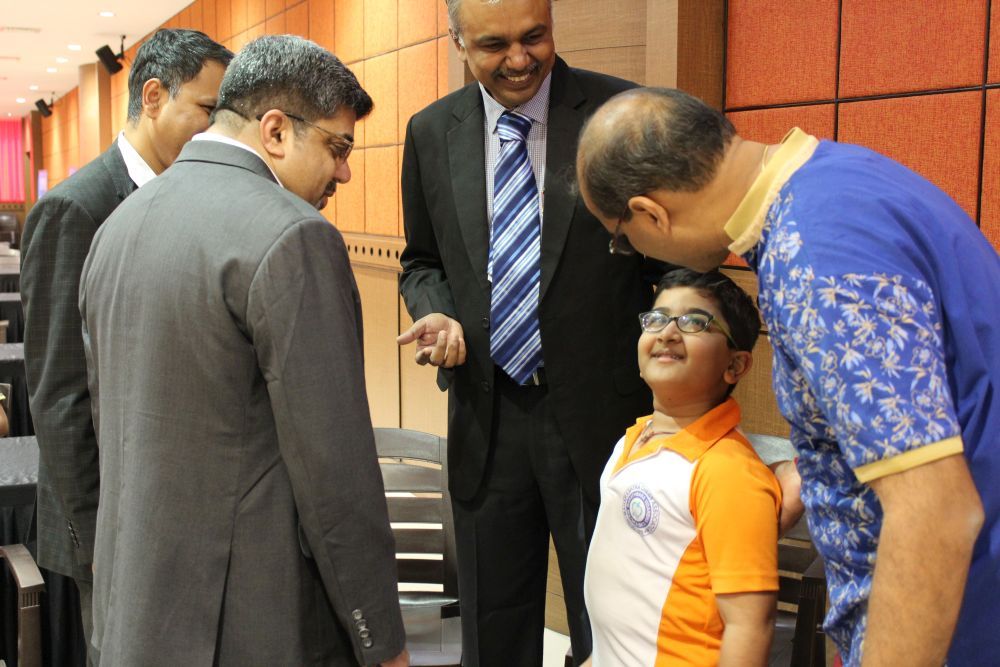 This picture is taken from National Amateur 2016. In it is Mr. Anand Pejawar (left) - the Executive Director of SBI Life. This is the fifth consecutive year that SBI Life is supporting chess in the city.

Final Rankings after round 9 When you grow old and look back, these medals that you had won as children evoke in you a sense of accomplishment! 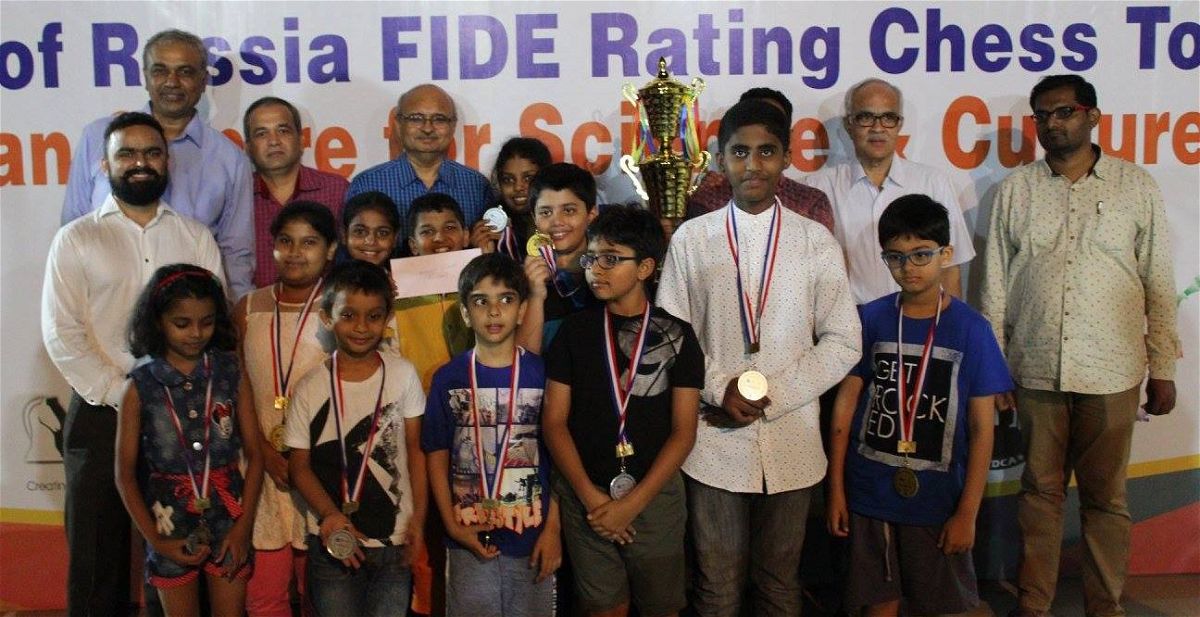 A group picture of all the winners

Sajandas Joshi was one of the top players of Mumbai in the past. Recently he had been inactive due to his coaching and other commitments. Thanks to the evening schedule of the event, he made it a point to play the tournament. 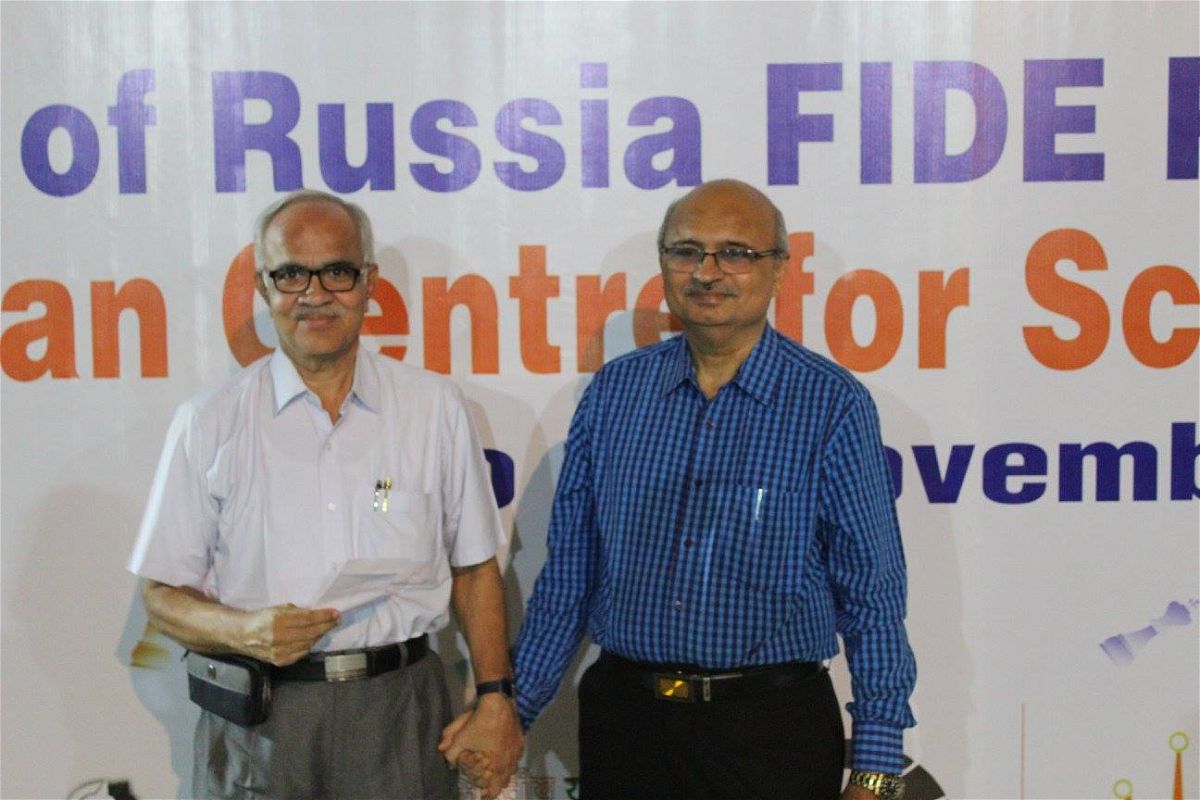 We asked Raghunandan Gokhale to tell us something about his friend Sajandas Joshi and this is what he said:

"Sajandas was very strong player in his teens having won Capt. Ranade Memorial Tournament (one of the few tournaments held regularly at that time) in 1976 ahead of then National Champion Raja Ravisekhar. Very few people know that Sajandas has beaten Levon Aronian when the latter was IM but very strong player in Linares,1997. Sajandas is an excellent coach with lot of patience and ability to work hard. If you see his games, you will make out that he was equally strong in all departments of game like attack, defence, endgame, middlegame etc. It was unfortunate that he could not become at least an IM because of lack of opportunities when at peak."

Of course, we contacted Joshi and asked him to treat our readers with the game against Levon Aronian! 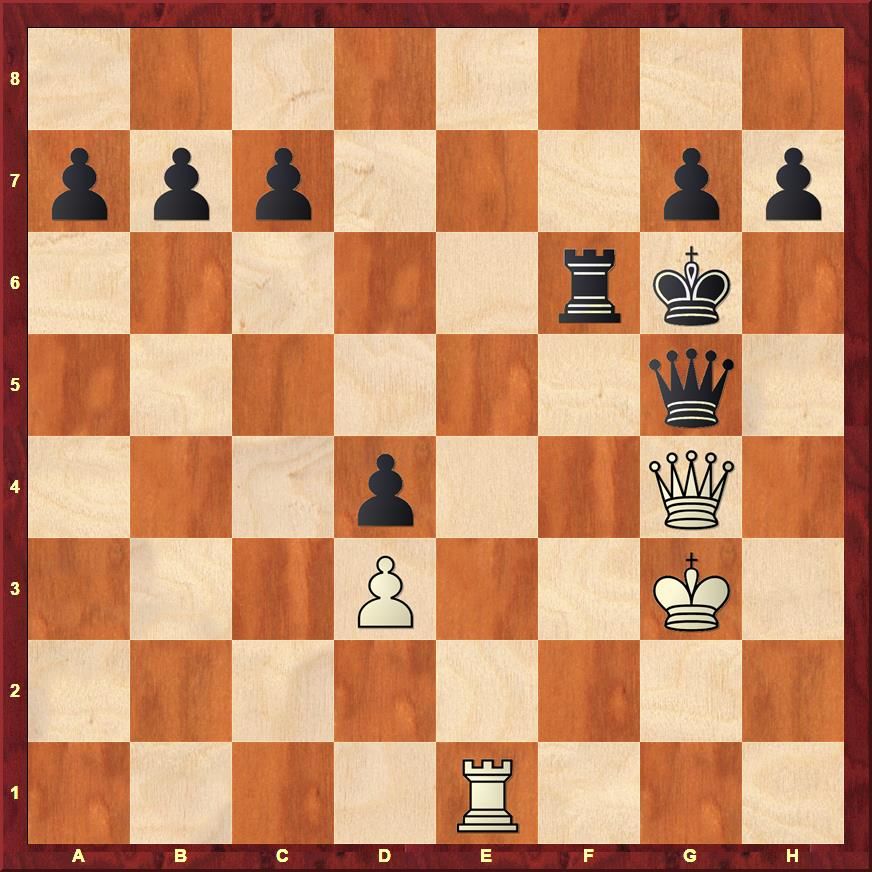 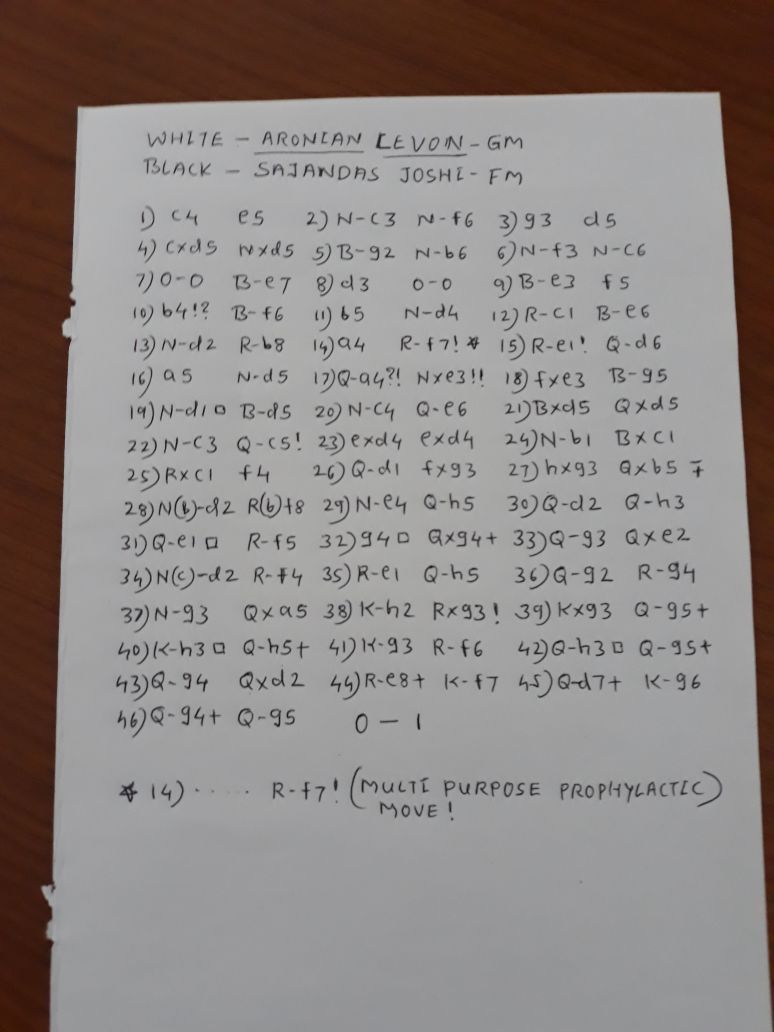 The game Aronian - Joshi written down on a paper by the winner!
On a parting note we leave you with one of Sajandas Joshi's best attacking efforts. This came in 1993 against the then talented youngster V. Saravanan. 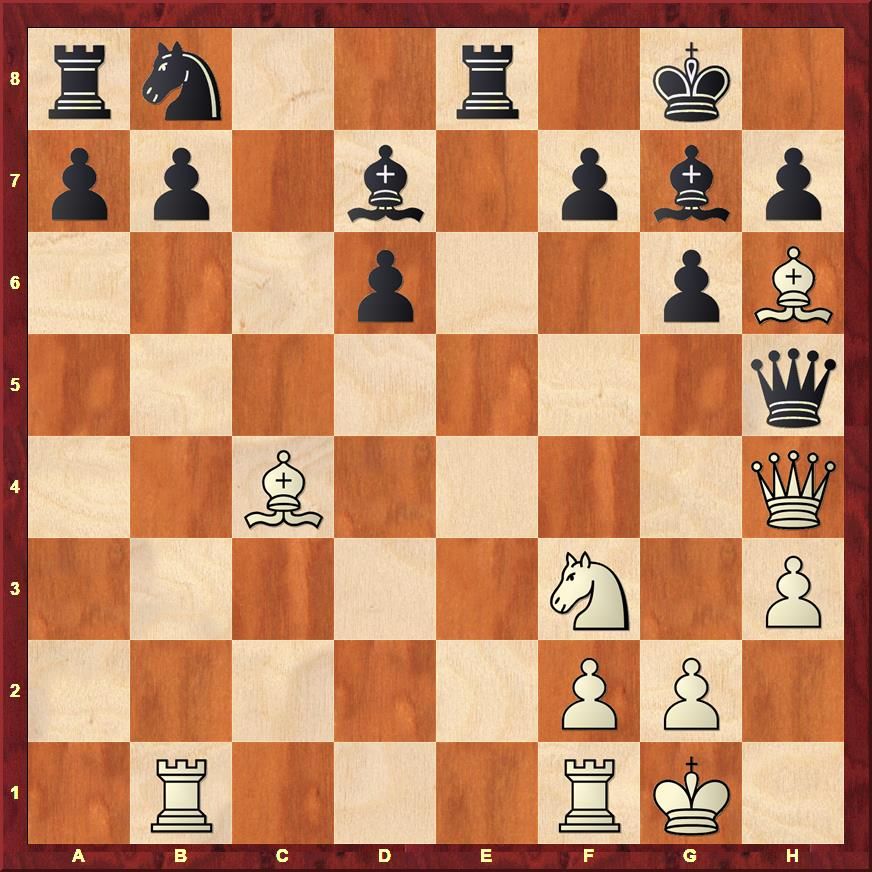 White to play. Calculate all the way until the end and then see the entire game below.

FI Praful Zaveri is the founder of Indian Chess School Academy. He is a popular trainer in Mumbai and also the author of the critically acclaimed Chess Course book for beginners. His vision is to build the chess culture in his hometown Mumbai as well as India and help the country produce many more grandmasters in future. For this he has been the organizer of some huge projects like the IIFLW tournament, regular high class events, training sessions, the Aagaard camp and also the tournament director of the above event!