One of the biggest results from the Altibox Norway Chess came in the sixth round when the American number two, Wesley So won the first ever classical game of his career against Magnus Carlsen. For Carlsen, this was his first loss not only of the tournament but of the year. So ventured the waters of a harmless looking but well prepared Exchange Slav to pull out this victory. All other games of the day were drawn: Anand drew Mamedyarov; Aronian drew Caruana; and Nakamura signed peace against MVL. Carlsen still leads the tournament with 3.5/6 but So, with his score of 3.0/5 has a game more than Carlsen in Norway. Round 6 report.

Carlsen suffers his first loss of the year

The sixth round of the Altibox Norway Chess was yet another round to have ended with only one decisive game. But what was special about this game was that it was the tournament leader and world champion, Magnus Carlsen, who was on the unfortunate end of it. For Carlsen, this was not only his first loss of the tournament but also the year. Carlsen was slated to play GM Wesley So in round six and was pretty confident that he will be able to hold the game.

“I can’t remember him (So) ever being close to beat me. If I want a draw, I will often get it easily,” Carlsen had said a day before the game.

Wesley So won his first ever classical game against Carlsen in round 7 | Photo: Lennart Ootes

Wesley had the white pieces in the game and opened with the Exchange variation of the Slav Defence. This isn’t, of course, the most testing line against the Slav but So said after the game that he was taken by surprise by Carlsen’s choice of the Slav. He further added that he had studied the variation recently “and what’s the point of studying if I am not going to play it?” he reasoned.

Seeing his opponent’s unambitious opening, Carlsen perhaps suspected that So might go all out for a draw. So, on his 6th turn, Carlsen avoided going for the old main line of this variation that leads to symmetrical structures. Instead, he went for provocative moves. But despite his best efforts, a somewhat symmetrical position did arise on the board.

Out of the opening, Wesley was a tad bit better thanks to his active knights but, at the same time, was a little concerned about Carlsen potentially launching an attack on the kingside. Carlsen did not go for this but rather chose to temporarily win a pawn. Wesley not only won it back easily, he was also able to win another one of Carlsen’s pawns in the middlegame. Carlsen made a few careless moves following this and this gave So a very tangible edge.

Once the position was ripe, Wesley rolled down his pawns like tiles in a Tetris game. Carlsen’s 42nd move 42…a4 was really the last nail in the coffin. This not only allowed So to hack a pawn off Carlsen’s queenside, it also mobilized his passer on the queen bishop file. Just two moves later, Carlsen resigned.

“It’s my first classical victory against Carlsen which, for some reason, took a very long time to come. But I finally managed to catch Magnus on his off-day,” said Wesley in his usual modest manner.

While So became the second player to score a win at the Altibox Norway Chess, Indian ace, Viswanathan Anand continued his streak of draws. Playing against Shakhriyar Mamedyarov, Anand played his sixth straight draw in the tournament. 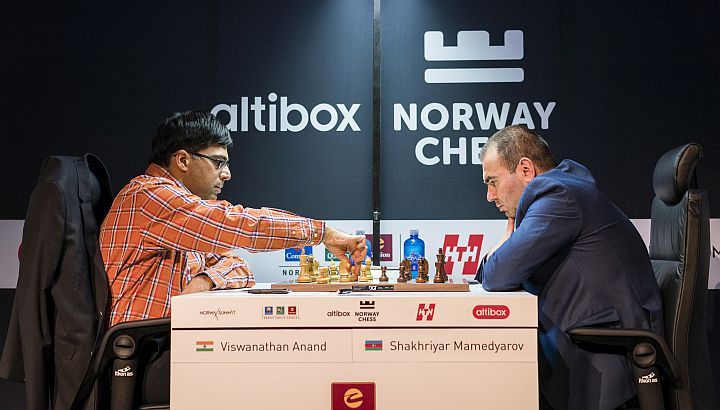 In the game, Mamedyarov went for the 3.g6 line of the Spanish Opening which Anand admitted to have expected “very cursorily” before the game. “To be honest, I did not know the theory here very well, in this line,” Anand said after the game. He was also slightly critical of his eleventh move, 11.Re1, which he said wasn’t the sharpest.

Mamedyarov also agreed with Anand on this and went on to say further that he felt his position was slightly better after Anand’s eleventh move.

Anand did find all the right moves after this but the position, as Anand himself admitted, had fizzled out and there was hardly anything to play for. A mass exchange of pieces soon followed and a draw was agreed after 32 moves. 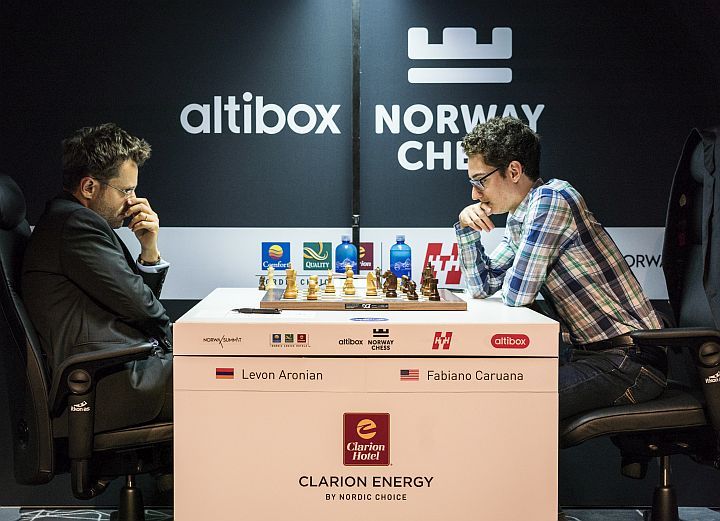 A slightly shorter draw than this one was the game between Levon Aronian and Fabiano Caruana.| Photo: Lennart Ootes

Aronian, who had the white pieces, opened the game very enterprisingly by sacrificing a pawn on the sixth move of the game. But his opponent, Caruana turned out to be thoroughly prepared for all of his tricks. Grabbing the offered pawn, Caruana induced several exchanges and by the time the players were out of the opening phase, a completely equal position was reached. In fact, by the 25th move, nothing but rooks and a bunch of pawns remained on the board. Having a rook and three pawns apiece after 28 moves of play, the players agreed to a draw. 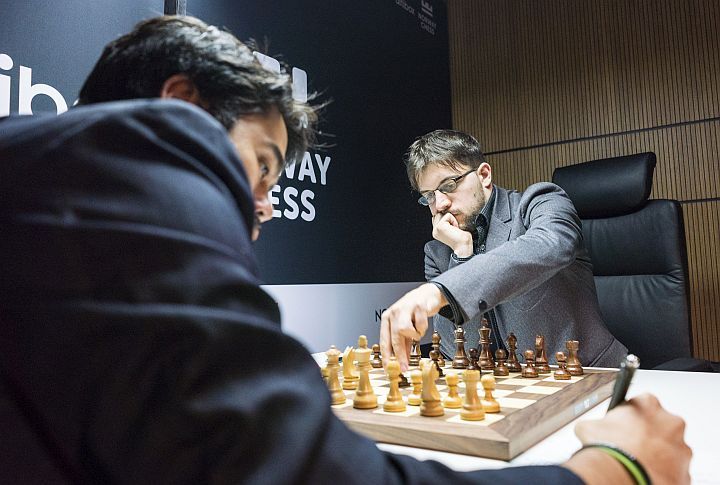 Hikaru Nakamura’s game against Maxime Vachier-Lagrave also piqued the interest of the commentators when it began | Photo: Lennart Ootes

Avoiding the Frenchman’s favourite Najdorf Sicilian, Nakamura opted for a rarely played system against the Sicilian defence. Vachier-Lagrave continued in Najdorf style nevertheless pushing his king’s pawn to e5. When Anand saw this he was initially shocked as the move blocked the diagonal of black’s own bishop but on closer inspection, he was left impressed by this choice of Vachier-Lagrave. By the time the game had reached the endgame, Nakamura’s light-squared bishop was imprisoned behind its own pawns. But even inside the pawn chain, the bishop did a decent job of holding white’s position together. By the time the 25th move was reached, the position was dead equal. The players shuffled pieces around until they had reached the first time control before agreeing to a draw.

After the sixth round, Magnus Carlsen is still leading the event with 3.5/6. Wesley So is just half-a-point behind with a score of 3.0/5. What’s noteworthy here is that So has a game more to play than Carlsen and hence the world champion’s extra half point might not account for much. Vishy Anand is yet to win in Norway, but he hasn’t lost either. He stands at 50% having scored 2.5/5.