Games in Stavanger did not even last three hours last night. Quick draws were seen on all of the five boards. In fact, Caruana's game against Mamedyarov finished as early as on move 26. The other games made it to move 40, but it was more a matter of appreciating the rules than hunting for winning chances. Anand's game against Nakamura looked promising but a tactical sequence by the American GM left nothing in the position to play for. Magnus Carlsen also played an interesting novelty against Karjakin but this too led nowhere.

The day of all draws

A rather sedate second day came to a close in Stavanger at the Altibox Norway Chess on Tuesday evening. All of the games finished in draws and none really sparked much interest. Magnus Carlsen, who had sped past the field with a win in the previous round, thus retained his half point lead. 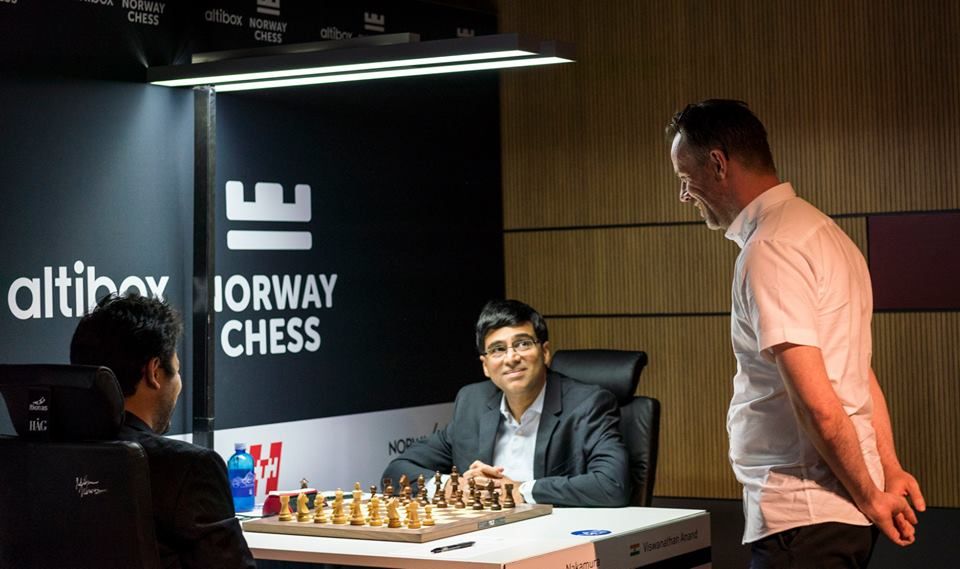 Anand and Nakamura, moments before their game | Photo: Lennart Ootes

Indian ace, Viswanathan Anand, was pitted against American GM Hikaru Nakamura in this round. The game began with the exchange variation of the Queen’s Gambit where, Nakamura, who had the white pieces, chose the modest 6.h3. Anand struck out quickly in the centre in response and darted the novelty, Bxd4 on his 11th turn. With this, he was eventually able to inflict a weak pawn on Nakamura’s queenside. However, Nakamura had good piece activity to compensate for the weakness.

On his 20th turn, Nakamura temporarily sacrificed a pawn and, after a tactical sequence, won it back while liquidating the position into a rook and pawns endgame. Both sides had a trio of pawns on the queen’s wing in the resulting position and it was clear already that the game was headed towards a draw. Nevertheless, the players shuffled pieces until pawn symmetry was reached and signed peace on the 39th move.

“That's what happens in chess now. A lot of positions look really cool, but you know just from using the computer so much that there always are resources to defend,” lamented Nakamura after the game. 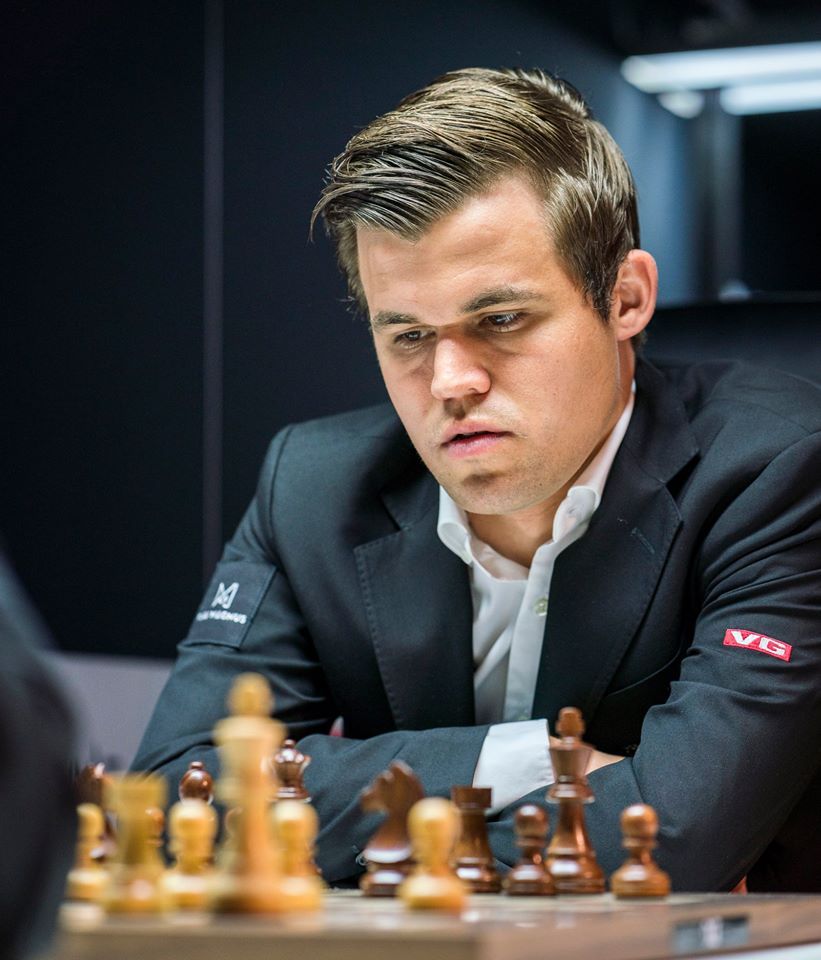 Like Anand, Magnus Carlsen also uncorked an opening novelty in his game against Sergey Karjakin sacrificing a pawn on his 14th turn. This did not lead to much, however, as it only induced more exchanges. Within the next ten moves, an endgame was reached with both sides having two rooks and five pawns apiece. The game went on for another 20 moves but the result was never in doubt.

Talking about his novelty, Carlsen said, “It’s not easy to find because Black gives up both a pawn and a tempo.” 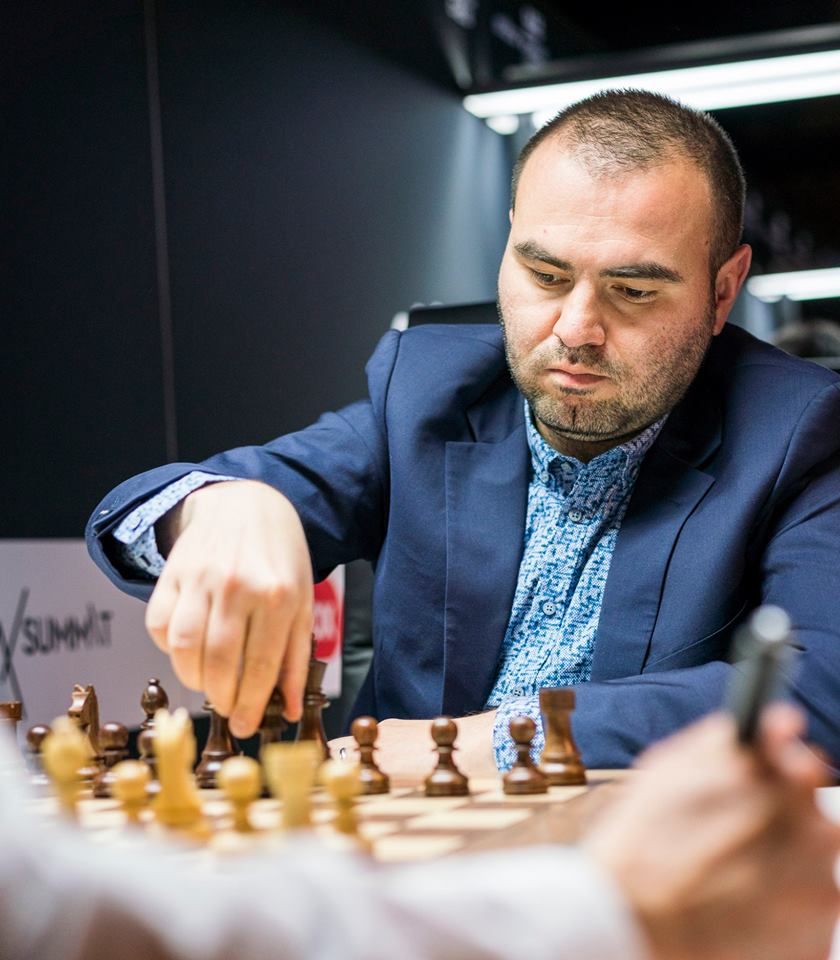 Shakhriyar Mamedyarov’s game against Fabiano Caruana was the quickest of the day | Photo: Lennart Ootes

With the black pieces, Mamedyarov took a page from Caruana’s book in the opening and essayed the Petroff Defence, one of the pet openings of Caruana. Caruana went for the most aggressive setup with 5.Nc3 that entailed opposite wing castles. But just as he was about to generate an initiative on the kingside, a queen trade led the game into an endgame that was slightly better for white. But Caruana wasn’t able to keep this slight edge for too long. On his very next turn he allowed Mamedyarov’s rook an active spot on g2 that rendered the position completely equal and a repetition of moves followed soon afterwards.

Mamedyarov said after the game that he thought he was a bit better in the final position but took the repetition since he had to go to the dentist the next morning. The Azerbaijani GM was on the brink of withdrawing from the tournament due to the toothache that he has been suffering. 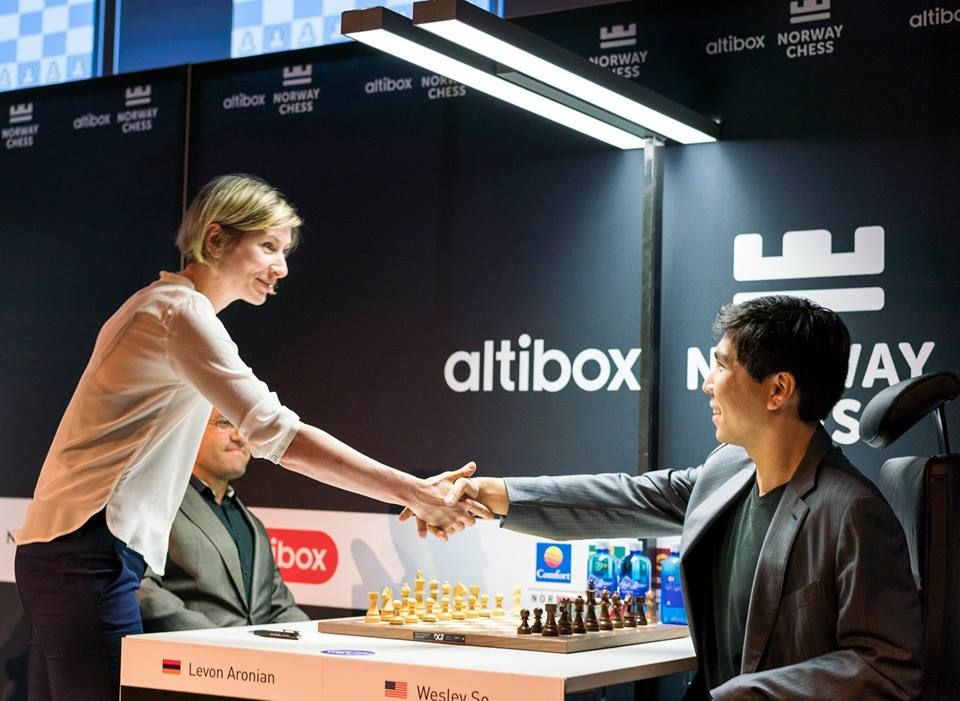 Aronian’s game against Wesley So was no barnburner either | Photo: Lennart Ootes

The two played the Catalan in which the Armenian star had the white pieces. Like most other games, this one, too, had witnessed a queen trade and a mass exchange of other pieces before the 20th move was reached. With rooks and bishops of opposite colour in combination with a bunch of pawns, play dragged on until the first time control was reached before peace was signed. 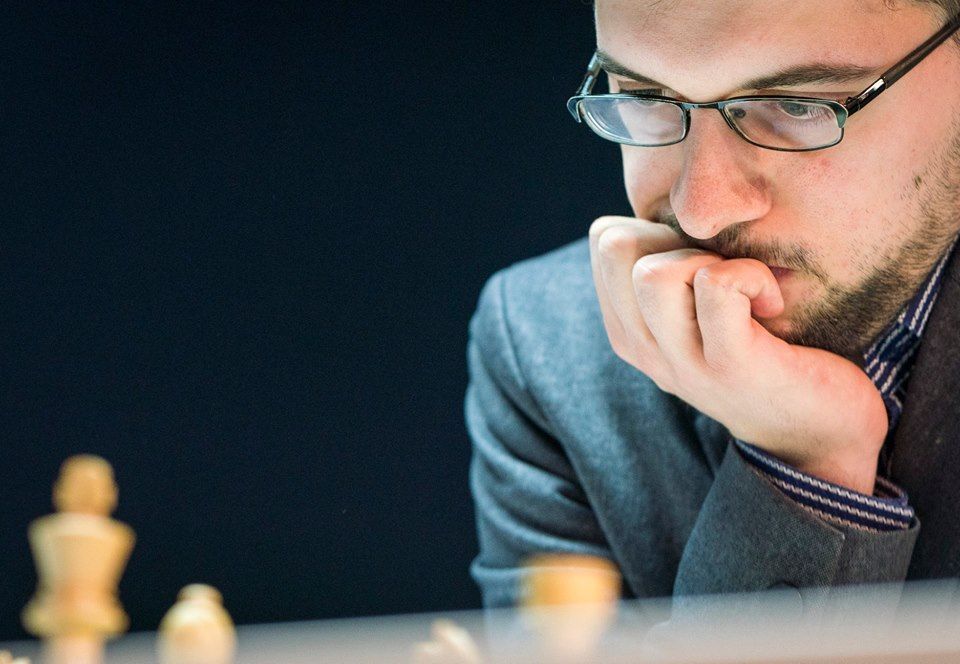 Maxime Vachier-Lagrave tried to mix things up a little in the opening by choosing the King’s Indian Defence instead of his favourite Gruenfeld to counter Ding Liren’s queen’s pawn opening. But Liren’s solid setup did not allow the Frenchman deal much damage. For the most part, play revolved around the centre unlike on the wings as is usually the case in this opening. After timely exchanges, a queen and knight versus queen and bishop endgame finished in a draw by perpetual checks.

For Ding, this draw meant that he has reached his 74th undefeated classical game. In the next round, he will face the Madras Tiger, Vishy Anand, with the black pieces. Other pairings of the round include the all American clash between Wesley So and Hikaru Nakamura, Magnus Carlsen against Aronian, Mamedyarov versus Karjakin and Maxime Vachier-Lagrave against Fabiano Caruana.