"When I first entered the chess arena in Bangalore in 1992, we used to have 50 entries in a tournament," writes Sushrutha Reddy. "The winner always used to be an adult and state tournaments had very less participants." All of this began to change as like minded people like Reddy and other coaches implemented the chess in schools project in the city of Bangalore. Chess started to flourish in the city and a glorious example of this is the Akshayakalpa Children's Chess League held on 13th of August 2017 with 408 participants. A report on this mammoth event.

When I first entered the chess arena in Bangalore 1992, we used to have about 50 entries in a tournament. If the entries were close to hundred, we would consider it as a very good number. Another observation I had made was that the winner of the Tournament often was an adult who was aged 25 plus! The age category State Championships had extremely less participation. Thus, in the year 1994, I came to a conclusion that Chess had to be included in Schools for active participation of children.

Little did I know then that I would go on to become a pioneer in promoting Chess in Schools in Bangalore. The origin of my involvement in Chess training in Schools goes back to 2006 when Hanumantha, the current Vice President of United Karnataka Chess Association, pleaded with me to take up a Summer Camp in Chess at Bangalore. I reluctantly took it up and loved the experience. Within a month thereafter, I left my job at a Company called e4e and decided to take the plunge into Chess full time.

The plan was to push Chess across Schools and also Organize as many Chess Tournaments as possible to create an awareness amongst the public. The first School I trained was GEAR Innovative International School with whom I had a working relationship until 2015. The School, under Dr. Srinivasan, gave me full support and I must say my evolution as a Chess Coach happened due to GEAR!

Creativity and Communication skills is an asset in the Teaching profession and I used these strengths of mine to generate interest levels amongst Children. Next, I decided that Chess in Bangalore required a dedicated Team who can promote it and cannot be done by an individual alone. I managed to bring in my close friends - Durgesh Kumaraswamy, Gavi Siddayya, Karthik Shetty and Sanjay Sindhia – and each of these trainers contributed immensely to the growth of Chess in Bangalore. As the years rolled by, we had more and more children enlisting themselves for Chess training. Each of the trainers mentioned above became a brand themselves and were now well known in the State. In the year 2015, my cousin Shashi Kumar, who heads Akshayakalpa, returned to Chess and decided his Organisation will be involved in promoting Chess in Bangalore. This came as an added boost to promoting Chess Tournaments in the city. Thus, after a series of events promoted by Akshayakalpa, we arrived at the Event that was organized on August 13, 2017. We named it as the Akshayakalpa Children’s Chess League. The League was invitational and Teams from Chess Shoots Academy, Innovators Chess Academy, Greenwood High, Silicon City Academy of Secondary Education, GEAR Innovative International School, Sri Aurobindo Memorial School, Delhi Public School and National Public School (HSR Layout) were invited to take part.

The Event had a special rule. Children from the participating Schools were not allowed to represent any Academy.

A total of 408 participants took part in the Event which was conducted across three Categories (Classes 3 and below, Classes 4 and 5, Classes 6 to 10). Vasanth BH, Karnataka’s most popular Arbiter, was the Tournament Director and was ably assisted by a Team of Arbiters that included Saleem Beig, Vijay Kumar, Supriya Reddy, Gavi Siddayya, Hariharan Subramony and Sanjay Sindhia. Silicon City Academy of Secondary Education, Bangalore’s most popular School in Chess, was the perfect host as they took care of the Arbiters by providing Breakfast and Lunch. Before we get into the results of the Tournament, due credit must be given to Jayaram Ramanna who is the nephew of Hanumantha. His return to chess after a sabbatical of ten years gave an added impetus to his Uncle Hanumantha, with whom he formed the Chess Shoots Academy which is the numero Uno Chess Training Institution in Bangalore today.

In the Open Category, Chess Shoots Academy expectedly dominated the Akshayakalpa Children’s Chess League by winning the overall Event. Innovators Chess Academy finished Runners Up. In the Girls Category, the domination at the School level over the last decade has always been between Greenwood High and Sri Aurobindo Memorial School with either of the Schools finishing first or second in almost all Inter-School Chess Tournaments conducted in the City. The same happened in the Akshayakalpa League, with Greenwood High winning the Girls Category while Sri Aurobindo Memorial School finished Runners Up.

The Overall Winners and Runners Up were decided using the method provided below:

Teams achieving the following Positions in their respective Categories generated the corresponding number of points.

The School/Academy that accumulated the most (and second most) number of points were declared the Winners and Runners Up.

Category Three in the Open Category was won by the Chess Shoots Academy Team comprising of Tejas Cavale, Patrick P Johnson, Monosij Roy and Amaey Advait had a walk in the park by scoring a perfect 12/12. ICA ‘B’ Team (Avi Jaiswal, Avichal Jadeja, Shreyas Shashi Kumar and Krishna Ravi) finished second with 9 points. Greenwood High ‘A’ Team (Aman Deepak Thadani, Varun Agrawal, Zain Muhammed and Vishesh Agarwal) finished third with 9 points as well. It must be also noted that Vaibhav Kalpaka of class 3 in National Public School (HSR) played in this Category and scored 6 points out of 6 and won a Board Prize. 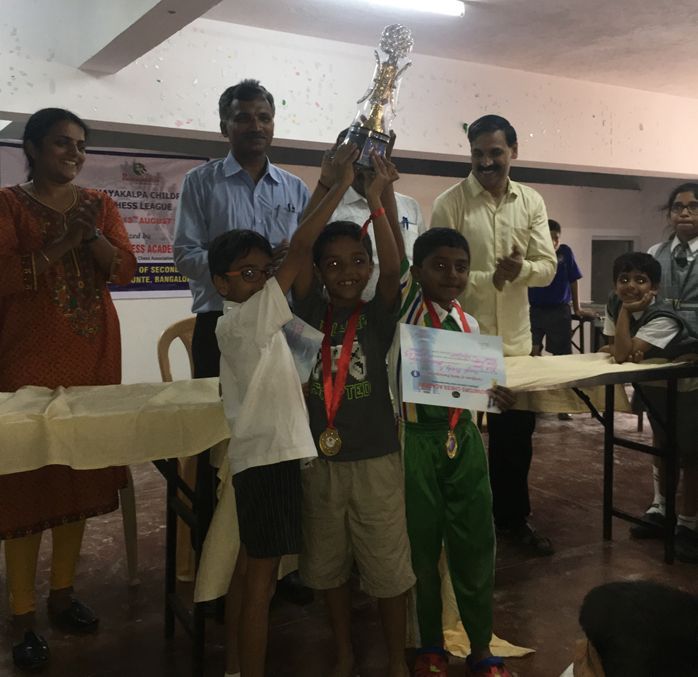 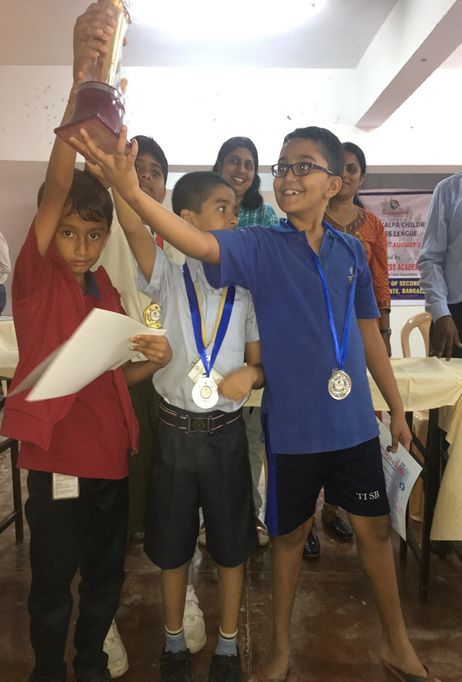 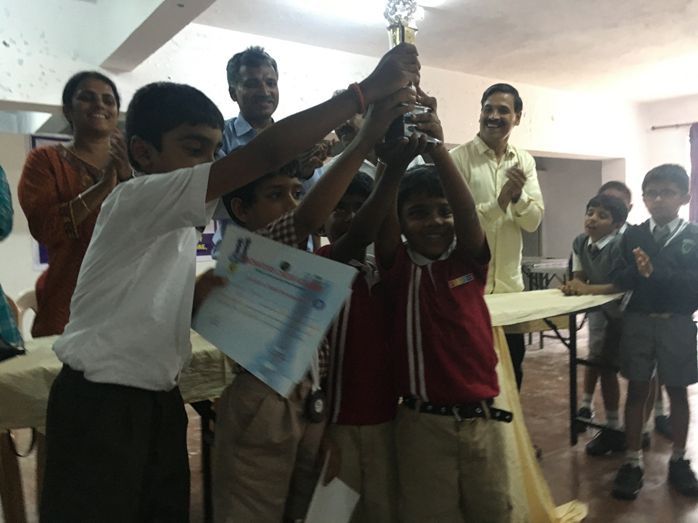 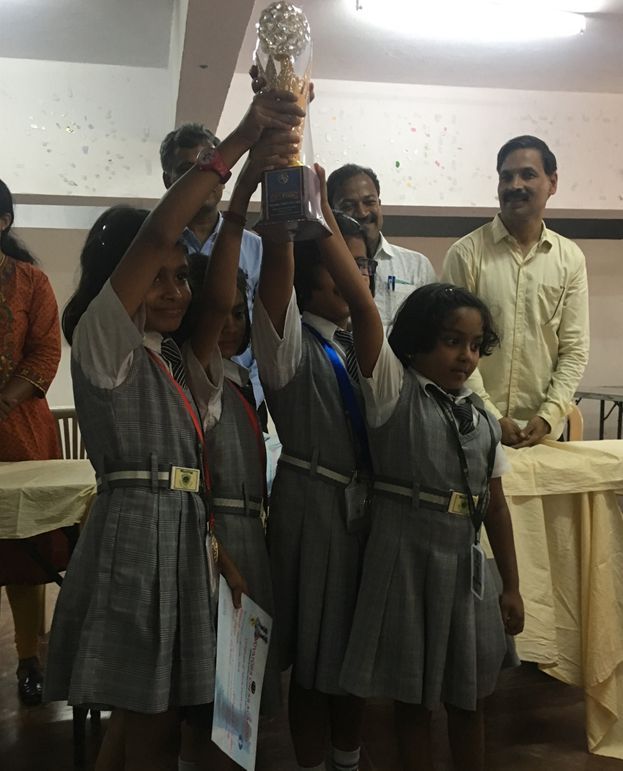 Greenwood High ‘A’ Team won the Girls section in Category One. 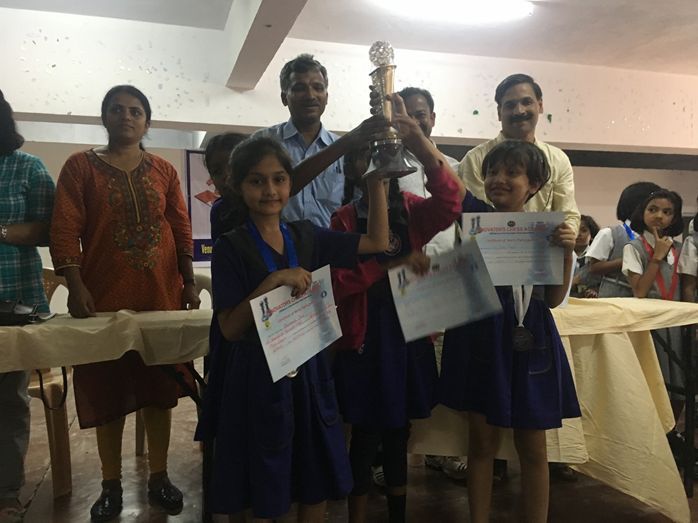 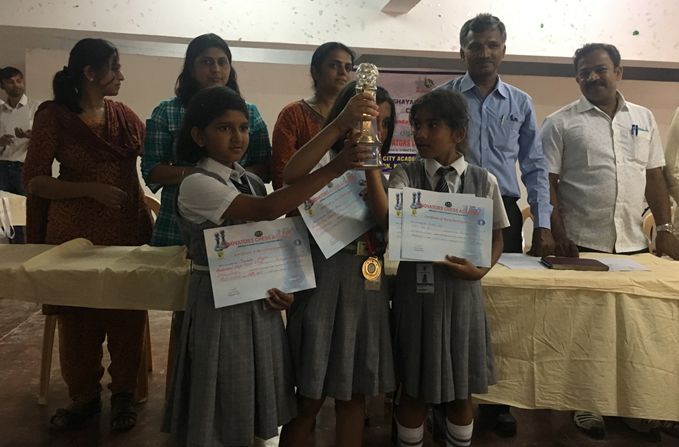 Greenwood High ‘B Team finished third in Category One Girls 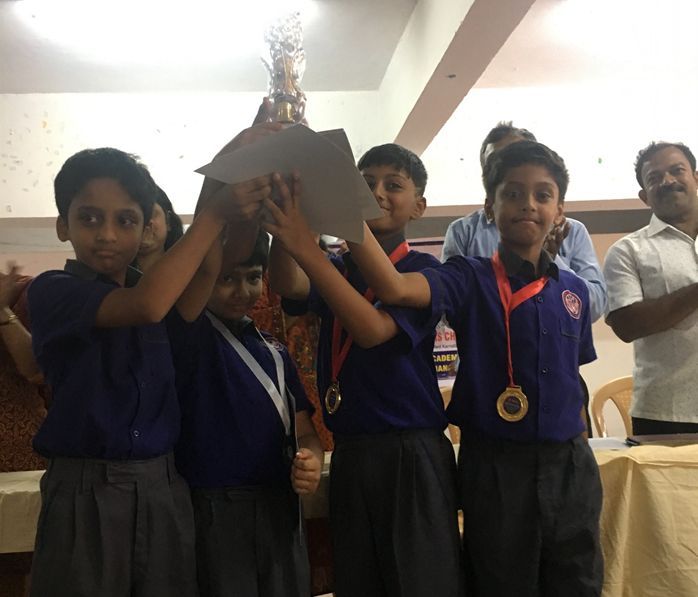 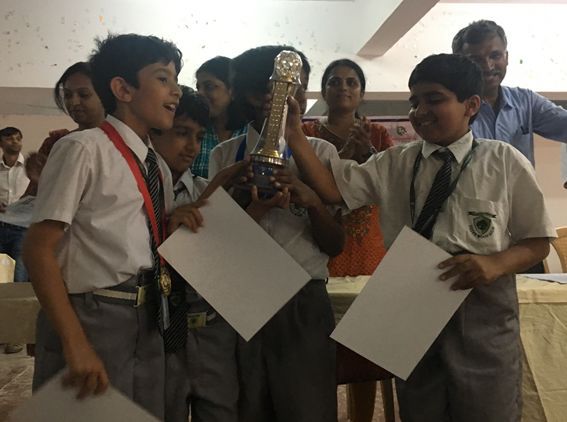 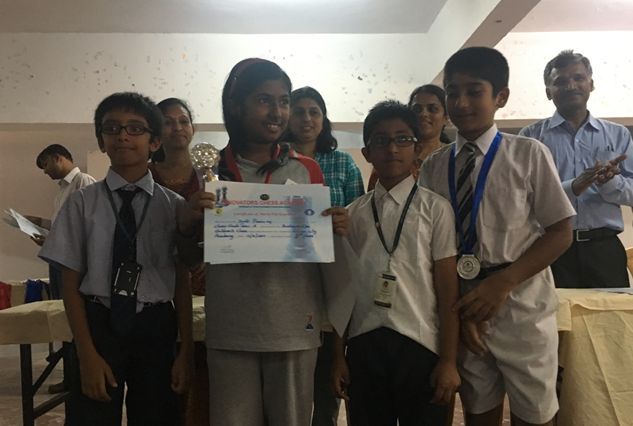 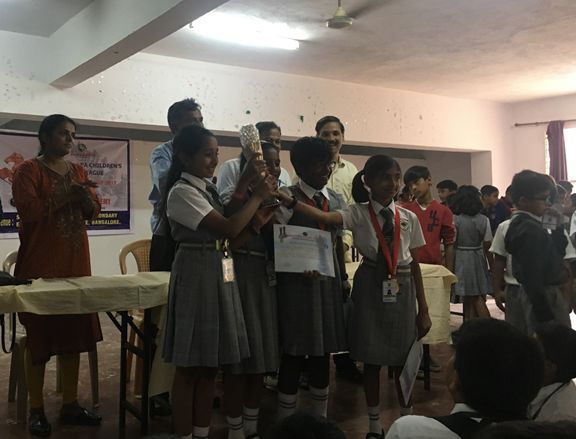 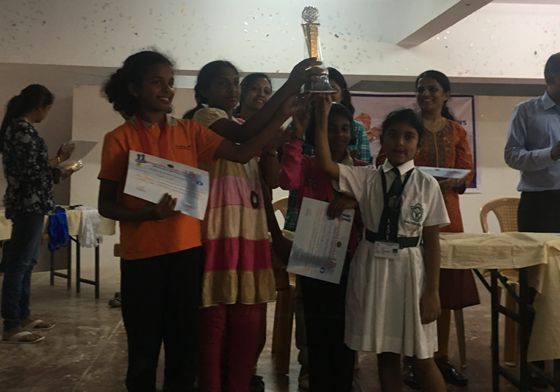 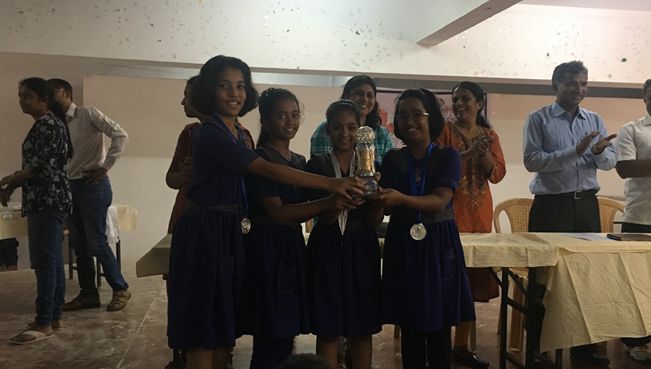 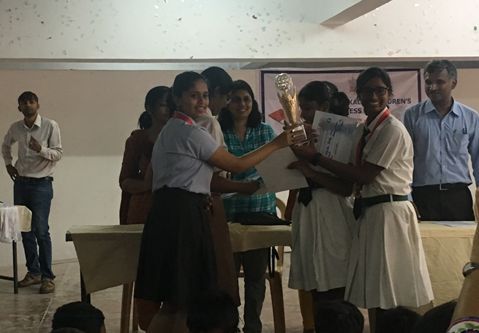 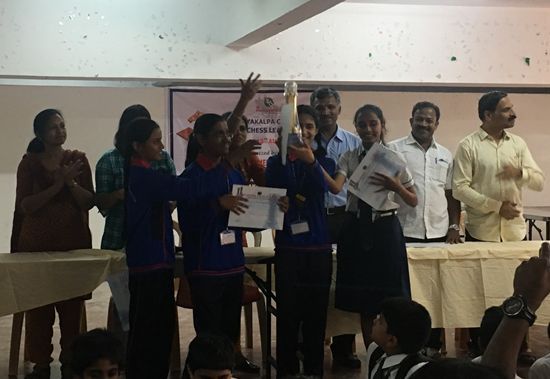 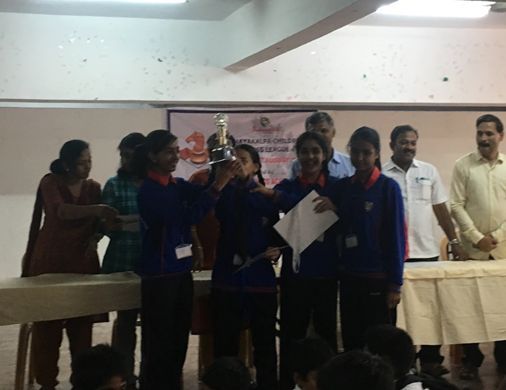 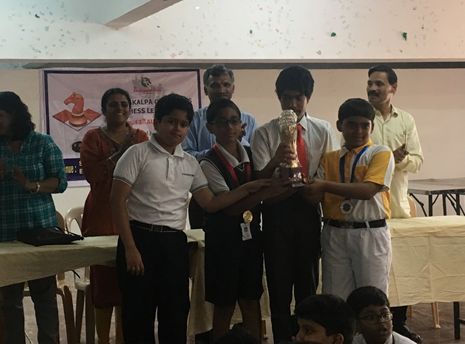 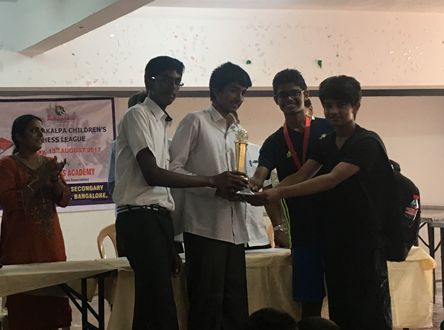 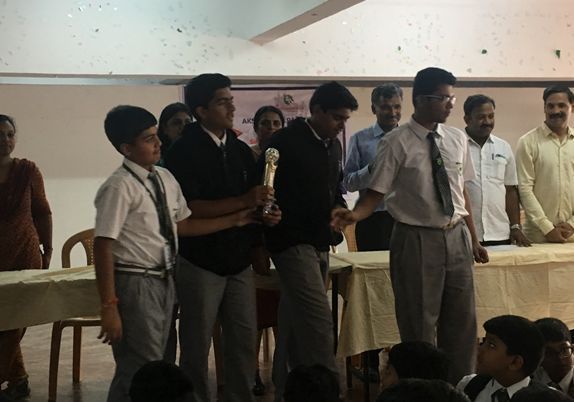 Greenwood High finished third in the Open section of Category 3 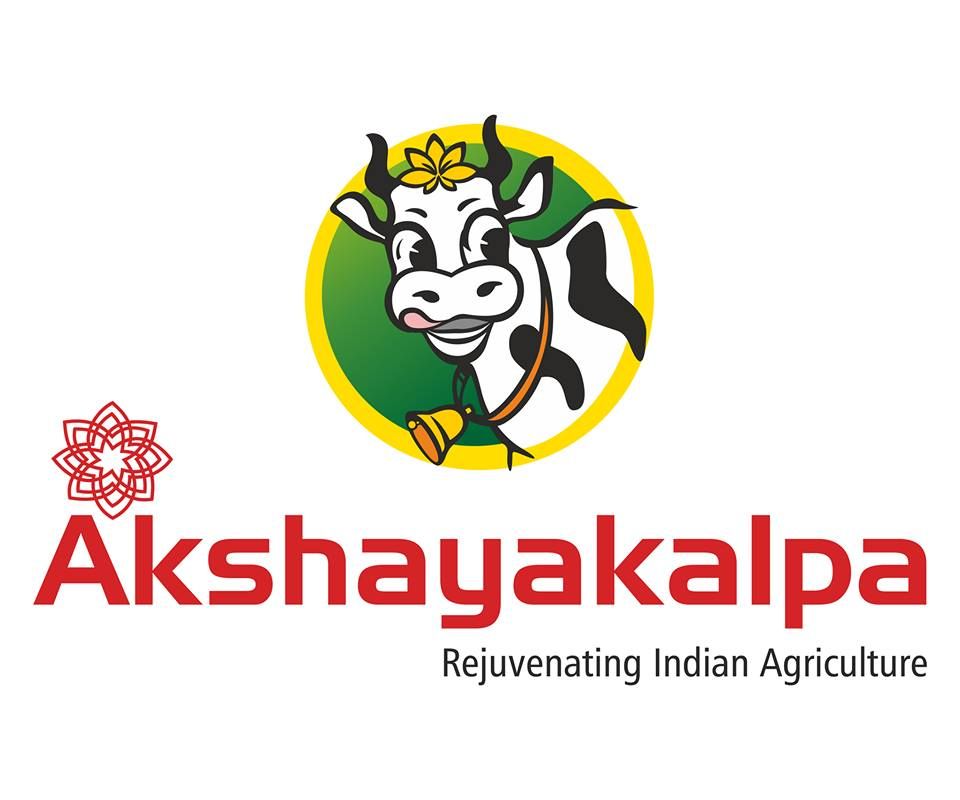 The CEO of Akshayakalpa, Shashi Kumar dreams of organizing a chess tournament for more than 5,000 people and making Bangalore a hub for chess akin to what Saint Louis is in USA. The company is making great contribution to chess in Bangalore, Karnataka and India.

Sushrutha Reddy is a well-known organiser who has been promoting chess at the grassroot level in Bangalore, Karnataka. Currently a chess coach at six schools, he has worked as the Joint Secretary of United Karnataka Chess Association and had been the chief arbiter at almost all tournaments in Bangalore held between 2000 and 2003. He is an occasional writer and had written the cover story on the Fischer-Spassky World Championship Match for The Week magazine in the past. Besides this, he owns the Innovators Chess Academy which has organised more than a hundred Chess Tournaments during the last thirteen years.

Future grandmasters of Karnataka Part I