With the finale drawing closer, Murali Karthikeyan and Aravindh Chithambaram scored two big upsets beating Vladimir Fedoseev and Martyn Kravtsiv respectively to take joint second spot on the leaderboard. The two are only half-a-point behind the leaders at 5.5/7. Nihal Sarin, while also being in contention for the title is also inching closer towards his final GM norm. In round 7, he drew effortlessly against Constantin Luplescu to come upto 5.0/7. Arjun Erigaisi also moved closer to his GM norm with a quick draw white against GM Amin Bassem.

Karthikeyan and Chithambaram in a six-way tie for second!

Round 7 of the 25th Abu Dhabi Masters 2018 witnessed a sedate draw in its headlining game between the two tournament leaders, Daniil Dubov and Anton Korobov. The biggest beneficiary of this development turned out to be local GM Salem AR Saleh who defeated the Vietnamese number one, GM Le Quang Liem to join Dubov and Korobov at the top of the leaderboard.

Young Indian Grandmasters also scored a fair bit of upsets on the top boards. The biggest of these was scored by GM Murali Karthikeyan. On board two, Karthikeyan brought down the fifth seed of the tournament, Vladimir Fedoseev and is currently in a six-way tie for the second place.

Fedoseev was definitely looking for a win in this game. His opening choice of the Sicilian Najdorf with black only affirmed to this. And for the most part of the game, it was indeed Fedoseev who was pressing for a win. In the middle game, the Russian Grandmaster had launched a dangerous looking attack on the white king. 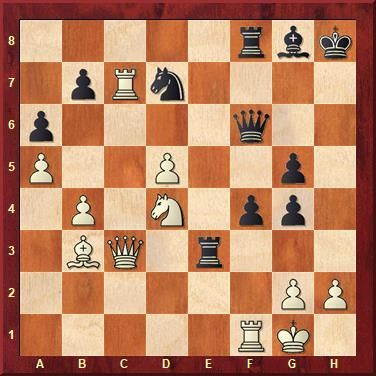 Black’s kingside attack looks dangerous but after black’s last move, white gets to enter an endgame with an extra pawn. White could simply defend his queen with 32.Qd2 and after black defends his knight with 32…Ne5, white has the tactical shot 33.Qxe3 fxe3 34.Rxf6 Rxf6 35.Re7, collecting the e3 pawn on the next turn.  Karthikeyan did find Qxe3 but he played it straight away without 32.Qd2 and Ne5 in the mix. This allowed white to recapture on f6 with the knight and take on d5 after 32.Qxe3 fxe3 33.Rxf6 Nxf6 34.Ne6 Nxd5. Also, in the ensuing position, white remained with his e3 pawn after the text sequence.

Nonetheless, the resulting position was still equal. But in his zeal to win, Fedoseev made a suicidal pawn break on his 39th move that tipped the game in Karthikeyan’s favour. 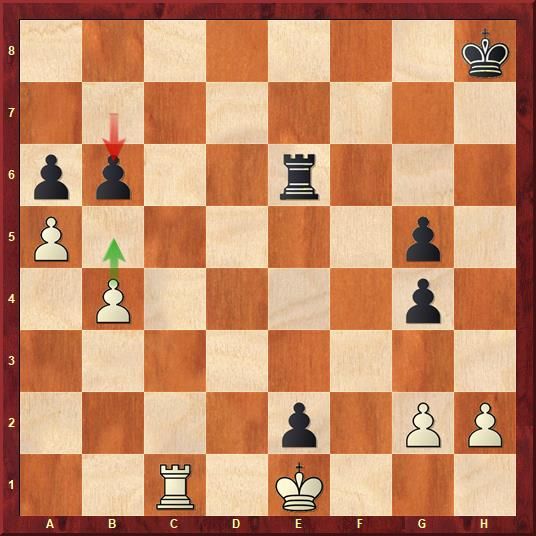 Black played 39…b6 here, allowing white the counter-break 40.b5. Now white is just winning as at least one of his pawns marches to the queening square with decisive effect. 40..axb5 was played in the game while 40…bxa5 loses to 41.Rc6. 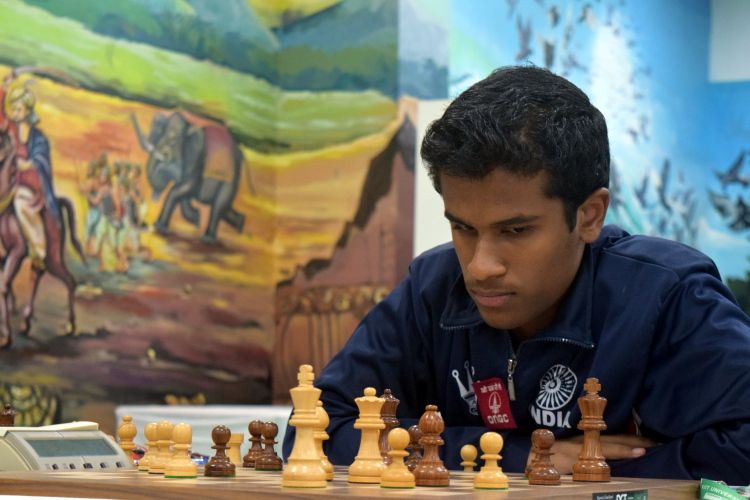 GM Murali Karthikeyan brought down the tournament's fifth seed, Vladimir Fedoseev after the latter's over-ambitious play in the endgame

Another Indian sharing the second place in this six-way tie is the Chennai based Grandmaster, Aravindh Chithambaram. Chithambaram was playing Ukranian GM Martyn Kravtsiv and pulled off a win in a Scotch Defence game.

Aravindh had the white pieces in the game and, as is typical in the Scotch, got an equal position out of the opening. However, Kravtsiv tried a bit too hard to prevent the enemy king from castling and got into a worse position. 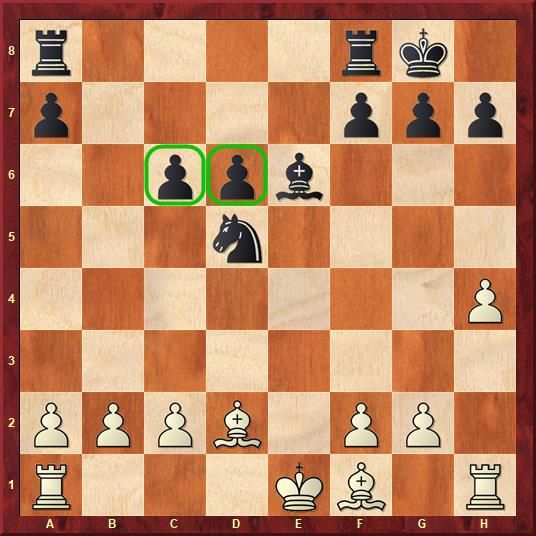 Black’s pawns on c6 and d6 are quite precarious here. Not only do they look potentially weak but also, if Black is not careful, one or both might fall off like autumn leaves in no time. Kravtsiv played 14…Bg4 here and after 15.f3 Re8+ 16.Kf2, succeeded in preventing white from castling.

The downside to this is that this allowed white to connect his rooks and now black’s central pawns are much more vulnerable. In just a few moves, both pawns fell and Aravindh was in a clearly winning position. 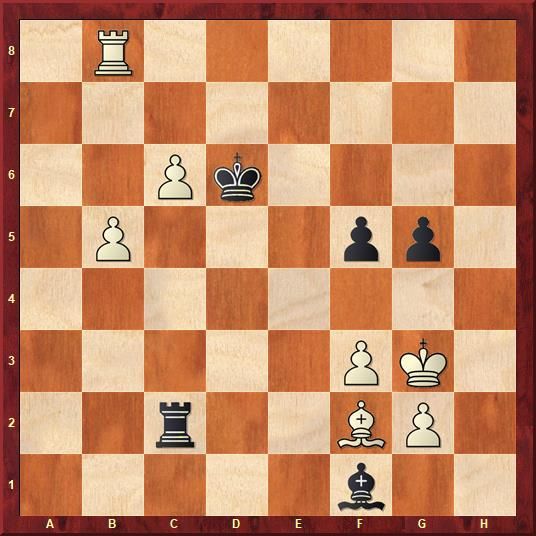 Here, white seems to be giving the position some final touches before forcing resignation. But the position got much trickier quite soon. The computer suggests 48.Rd8+ Kc7 49.Rd7+ Kc8 and 50.Rd5, after which it all looks straightforward. Aravind chose to push his passer here with 48.b6, however, and allowed 48…f4+. White recovered the piece here after 49.Kh2 Rxf2 and 50.Kg1. 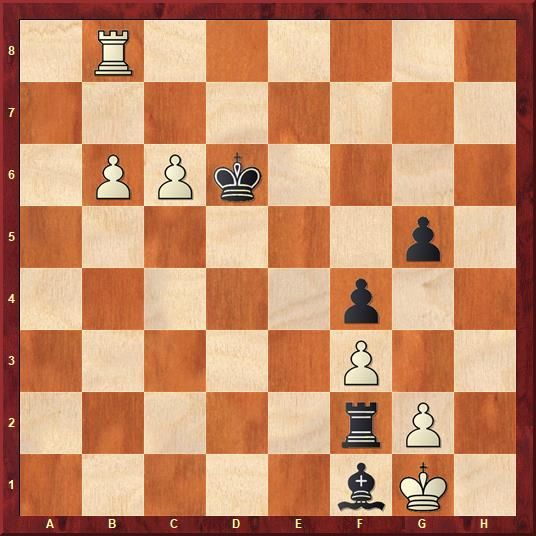 But here, after 50…Rb2 51.Kxf1 Kxc6, the position went from being clearly winning for white to one where black had fighting chances. The tricks still haven’t ended though. Aravindh very cunningly gave up a pawn here with 52.Kg1! 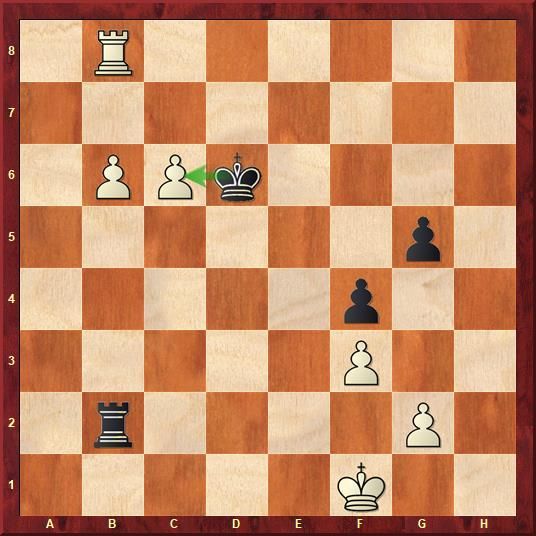 If black takes on b6, the white king just collects everything on the kingside with Kh2-h3-g4. The fun part is, black could have enjoyed full equality one move ago had he not hurried to take the c6 pawn and played 51…Rb1+. Now, after 52.Kf2 Kxc6, the white king needs longer to reach g4, allowing black enough time to bring his king to the kingside to defend.  Lots of skirmishes ensued after this but Aravindh came out on top at the end. 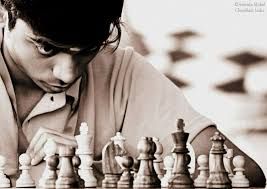 Meanwhile, IM Nihal Sarin also inched closer towards becoming India’s 53rd grandmaster, holding GM Constantin Lupulescu to a comfortable draw with the black pieces. Nihal essayed the Queen’s Indian Defence in the game and came up with a novelty on his 14th turn which led to a quick liquidation of the position. In the ensuing heavy piece endgame, Nihal’s d6 pawn looked a little weak but with his active pieces, he held the draw without batting an eye. 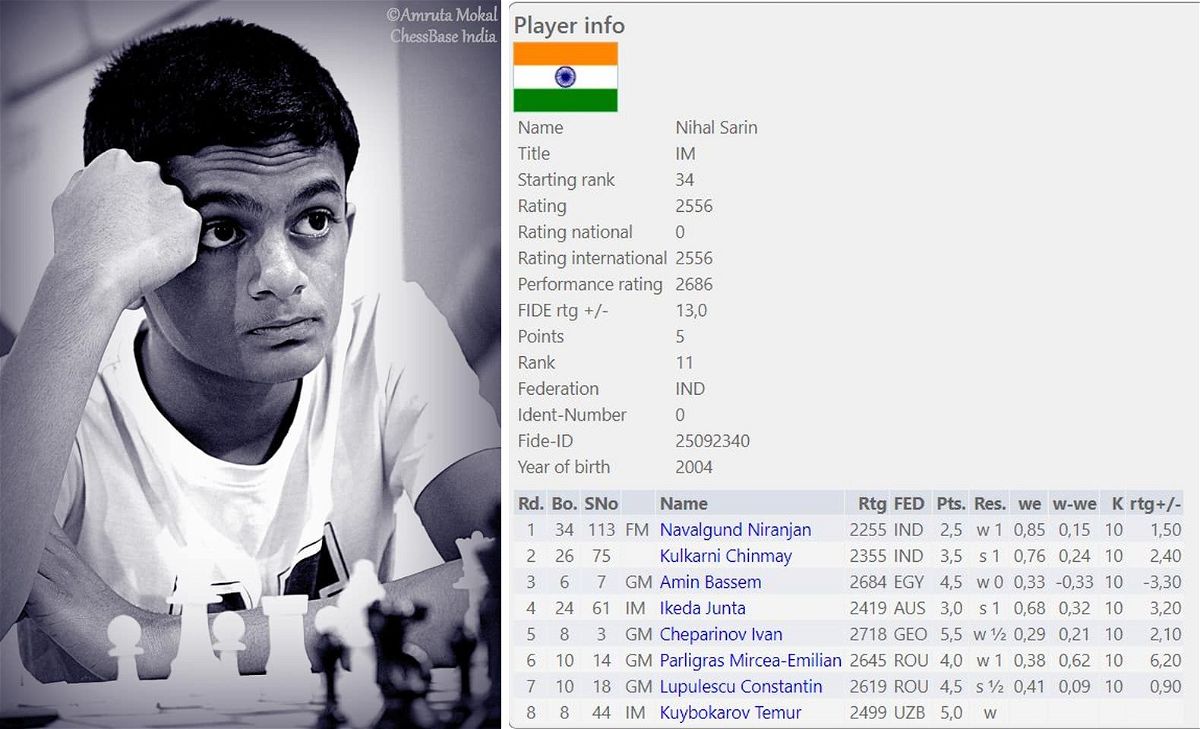 Another young Indian, IM Arjun Erigaisi is also heading strongly towards his GM norm. In round 7, Arjun held the Egytian number one GM Amin Bassem to a draw without breaking a sweat. The game only lasted 19 moves in a Classical King’s Indian Defence. Going for an early Queen trade with the white pieces, Arjun ensured that he got a safe and solid half point. So far, his performance rating has been a stunning 2586. If he could maintain his solid play in the next two rounds, he might as well become another GM norm scorer from India! 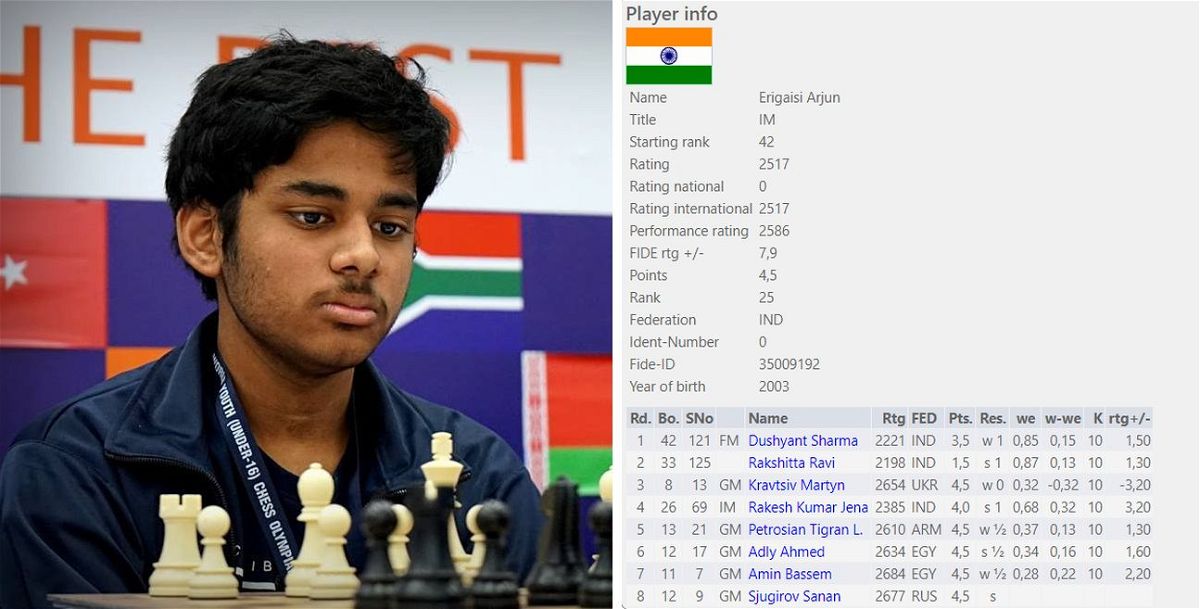 Arjun Erigaisi is another Indian who is very close to his GM norm | Photo (L): Amruta Mokal