An hour with the God of chess!

Many people in India started playing chess by listening about the exploits of Vishy Anand. For many Indian chess fans, Viswanathan Anand is the God of chess. To get a glimpse of him is a dream of every chess player. To talk to him would be asking a bit too much. But playing a game against him! Now that's just impossible. Well, not for Prasanna Rao! In the year 2000, this seven-year-old boy from Dombivli, Mumbai, got a chance to not only meet Anand, but also play an hour long game against him! Now Prasanna is 23 years old, an IM with three GM norms and 2464 rating, but that hour spent with Anand still remains the most special memory of his life till date!

The hour I lived!

I wanted a headline a bit more crazy because a game with a world champion of chess does not happen everyday. It unequivocally deserved a better headline but then there are some things in life when least emphasized has more effect. I exert my mind to find words that could denote the game I played with WORLD CHAMPION V.Anand. While writing this piece it still sends shivers to my spines, nerves and gives pain to my arteries. I think it does even more than that. Freezes the brain itself. So at 3.a.m, I start writing this article. Crazy as the game chess, crazy as me.

Even though I have an awful memory (irony of my life!), I still have vague but bright memories of the match I played with Mr. Vishy in 2000 just after he became World Champion in Tehran, Iran. Anand won his first world title beating Spaniard Alexei Shirov in the final. It was a knockout tournament held in two cities. New Delhi hosted the first leg and the final was held in Iran.

Lead up to the game-

I remember I won a school tourney in Dombivli (My hometown), a tense sixth round game which I emerged victorious and got the title. So after winning the tournament, my mom comes up to me and says, “Son, since you have won the tournament your gift is you are going to meet Mr. Vishy Anand." I looked up to my mom and said, "Are you like kidding me"? (Definitely, I would have not said it this way but something equivalent to it, I presume)

Then with some train travels, going to Bhandup ( I eventually found out later that it was Anand's brother's place) I was sitting on a sofa waiting for the world champion to arrive and surprise, stump and shock me. Even up to this point I was not genuinely believing that I was going to meet Mr. Vishy Anand. THE VISHY ANAND?

And then Mr. Vishy Anand comes from that corridor, walks up to me, and gives me a handshake. My eyes lit up like a 3-year-old kid after seeing an ice-cream. 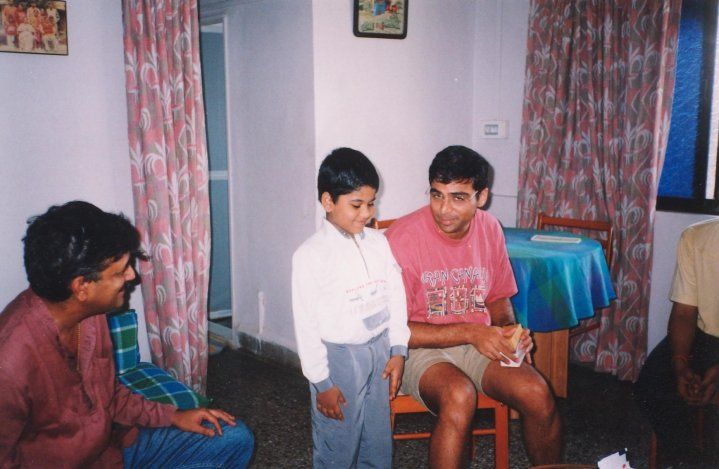 I could not believe he was Anand. COULD JUST NOT BELIEVE. I had to pinch myself hard, pretty hard just to make sure it was not a dream? NO. I have met Vishy Anand! THE VISHY ANAND!

With all the numbness, dumbness, awesomeness surrounding me my mom popped out the idea of me playing a game with the World Champion. My hands went cold, heart stopped pumping and I looked up to him and gave a wry smile thinking "You can't beat me! I just won a tournament!"

I arranged the pieces slowly, precisely, keeping the pieces at the center of the square (at that moment everything mattered) and took the white pieces without asking him and giving him the look " I am the kid! Let me at least have that color. ( I did that, certainly)

I played 1.e4, he played c5. Normally when you play c5 from black, you are going to play for double-edged positions. I had this vague theory when I was young and later realized how vast chess is. He played the Scheveningen variation. I blitzed my theory knowledge to almost 17 moves (I was proud of it when I was young, but today it all looks elementary where the computers have taken the preparation a notch higher). He was playing fast, I tried to match him by playing at his speed but you cant keep it up with the speed king for a long time. After a while, I simply missed a tactic, lost a pawn and gradually the game. The game duration was for more than an hour. THE hour I lived! 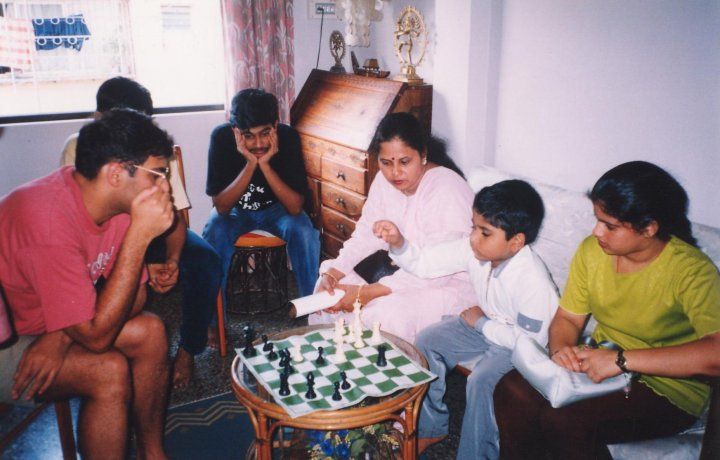 Look at the queenside!

After obviously losing the game, Anand gave me a pep talk. The one advice which sets apart from the rest is "You should practice chess as you brush your teeth everyday". Simple but effective. These words were going to be etched in my mind forever. After that, I have had many encounters with Anand and the feeling maybe has sunk in. But that day it was distinctive. The day which could change the course of my life. 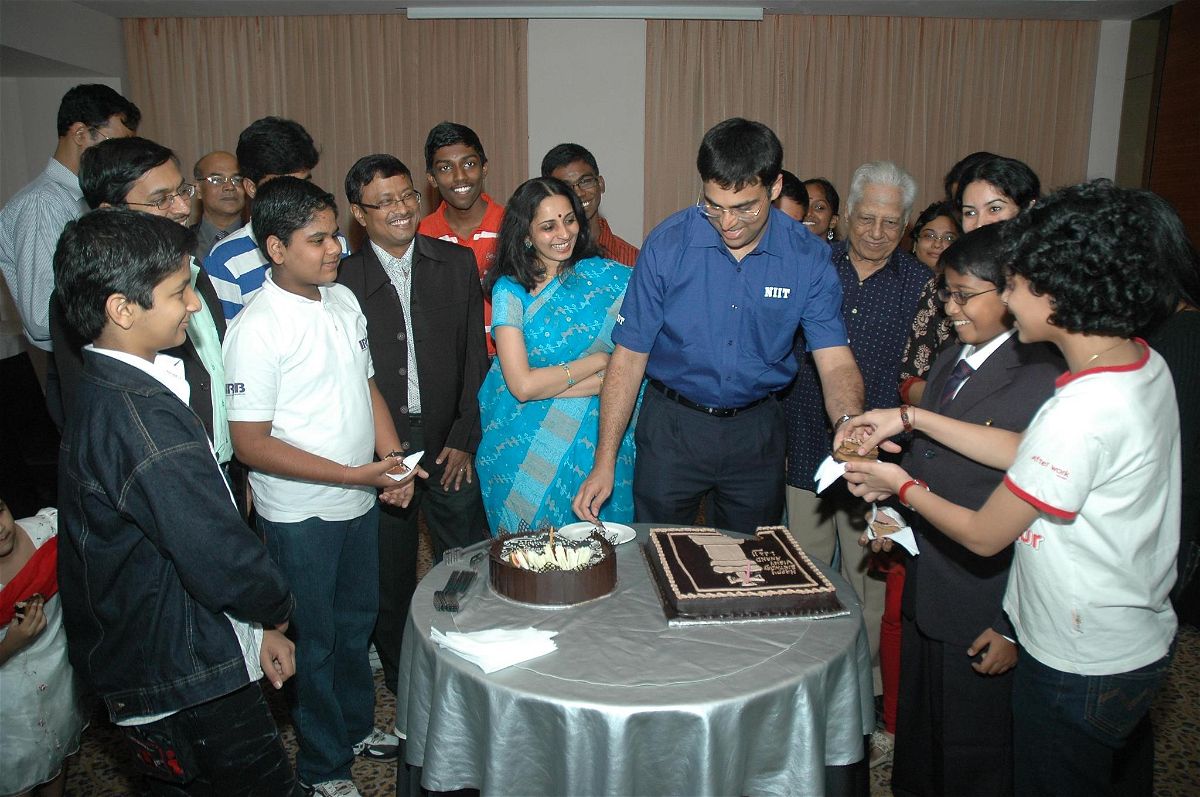 How many chess players can you recognize from this image?

If you are a chess player and an Indian, then Mr. Vishy Anand is a GOD to you. You meet Gods in your dreams and as people say in heaven. But it was a bit different for me. IT WAS A REALITY! People have asked me billions of times what inspired me to play chess and this article is my answer to all. So here I am completing the article at 5.a.m and signing off!

Subsequently Vishy Anand tweeted about this article and it gave Prasanna a surreal feeling:

Keep a track of such interesting stories by visiting Prasanna Rao's blog: 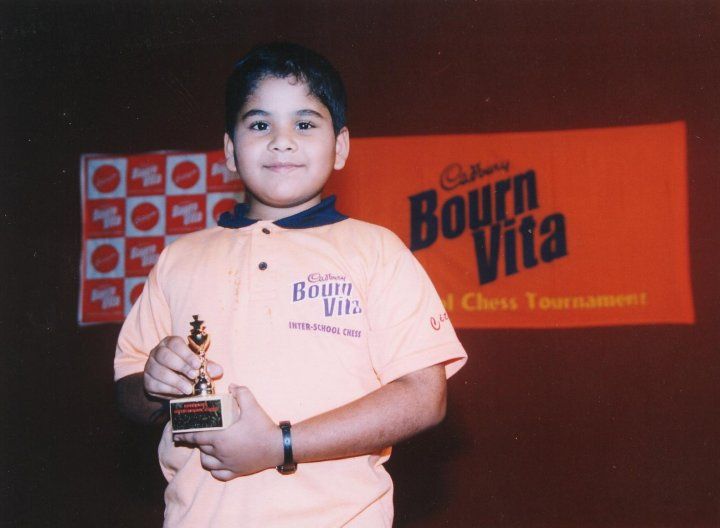 Prasanna Rao was one of the most talented players of Mumbai in his childhood. (As you can see in the picture above, he is holding the trophy of the famous Bournvita tournament in the city). The grown up Prasanna (image below) is now 23 years old, an International Master with three grandmaster norms with a rating of 2464. He considers chess to be his "professional hobby" and is currently doing his masters in Informational Technology and Management at the University of Texas, Dallas. 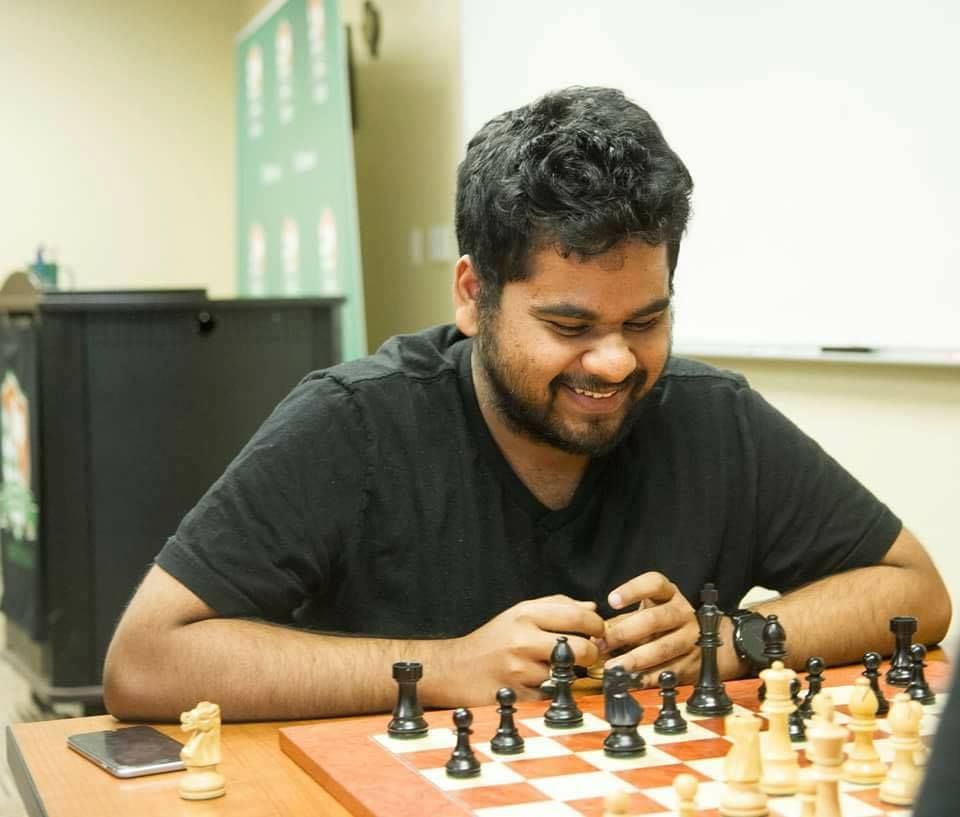 Prasanna in 2017, practicing chess in UTD