Everyone loves to play blitz! But two guys from Himachal Pradesh Hansraj Thakur and Hitesh Azad decided to take this a notch higher. They played non stop blitz for 53 hours, 17 minutes and 49 seconds and 303 games to create a world record for the longest period of playing non stop blitz chess games. They bettered the total time of Jacek Gajewski and Wojciech Waruga who had played a total of 514 blitz games in 50 hours. Hansraj and Hitesh sat across each other in Mandi, Himachal Pradesh and played chess for over 53 hours as a part of endeavour to spread awareness about the upcoming Loksabha elections in the country. In this article FI Praful Zaveri tells us all about this new world record. We also have all the 303 encounters, just in case you would like to check the quality of the games.

India – the world’s largest democracy - is getting ready for its ensuing general elections - billed as ‘Desh Ka Maha Tyohar (‘Country’s Biggest Festival’) – in April/May 2019. The Election Commission of India - an autonomous constitutional authority responsible for administering this process is performing a herculean task of getting rolls ready and asking its citizens to exercise their right. And, to the surprise of one and all chess is playing a big part in this drive! How? You may ask! Well, Mandi – a small town nestled in Himachal Pradesh - took a big initiative of wooing voters through chess by arranging a Non-Stop Blitz Chess Marathon from 4-6 April 2019. 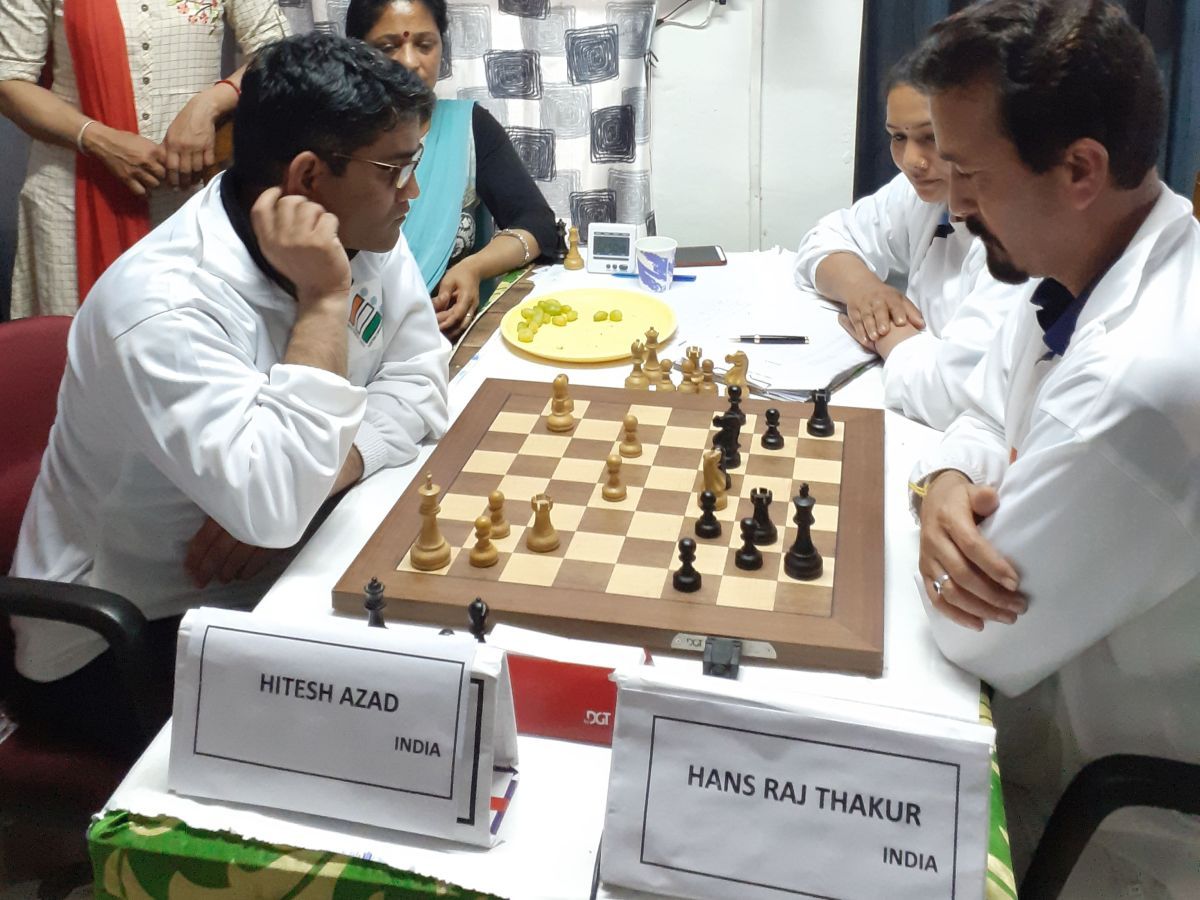 Two men who decided to make the 64 squares their world for the next two days!

Two players, Hansraj Thakur and Hitesh Azad decided to better the world record for non-stop Blitz, which was created by Jacek Gajewski and Wojciech Waruga. The Polish duo had created a world record by playing non-stop blitz for a whopping 50 hours, 1 minute and 7 seconds from 15 to 17 December 2018. They played a total of 514 games (time-control not available) with Gajewski winning the close contest with 259.5 to 254.5 scored by his rival. You can browse the details of the world record here.

When the idea of creating this record was brought to the author of these lines by Ramesh Khachi, national arbiter, I told him that a record has its authenticity if the games are not only recorded but also broadcasted live simultaneously. As such, on my recommendation it was decided that besides non-stop video recording, the game were to be transmitted live on Followchess and other prominent websites of the world. Since the exercise involved literally staying awake for nothing less than 60-hours with intermittent breaks, we had one DGT Board Operator, Vivek Mahajan at the base station and FA Sandesh Nagarnaik monitoring the games from Mumbai through Team Viewer. 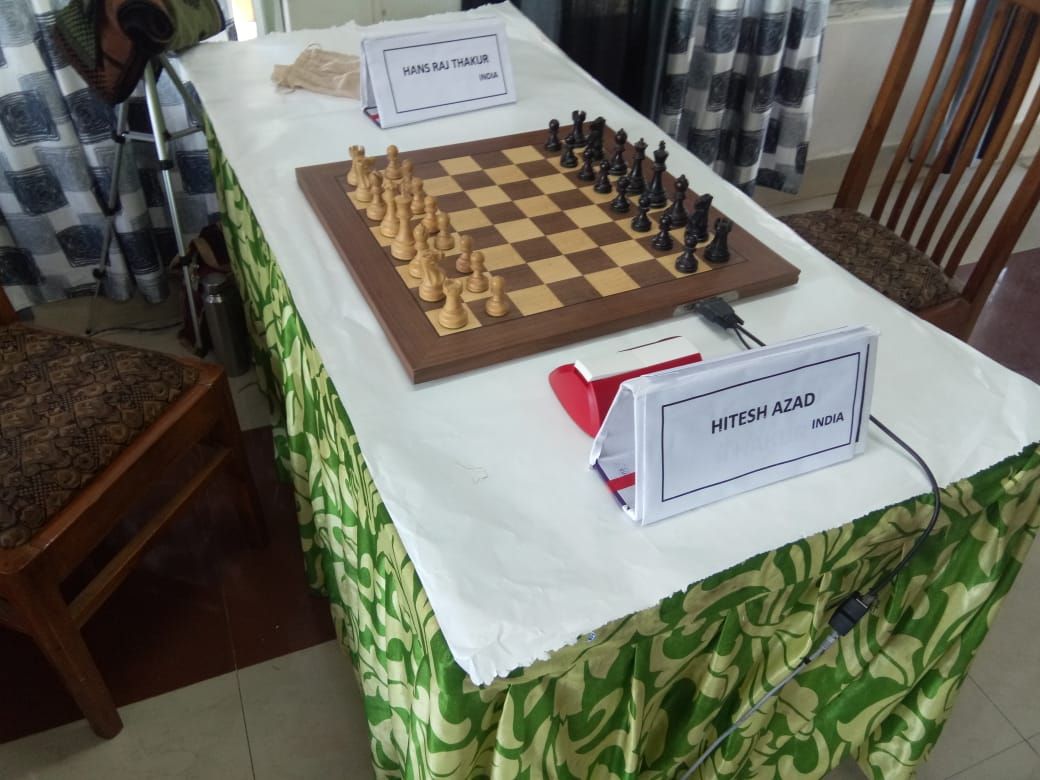 Everything is set for the longest blitz match to begin!

Thus begin the contest on 4 April 2019 at 11.15 am with a time-control of 5 minutes per player with players alternating the colours after every game. The rule allowed players to accumulate 5 minutes for every hour of games played. Thus, after 10-hours players were allowed to take a break of 50-minutes. However, they showed tremendous grit and determination by hardly having any break in-between excepting for a few minutes technical break of re-setting the board after the end of each game.

On 6th of April 2019 at around 01.00 pm, the players after playing a whopping 303-games spanning over 53 hours, 17 minutes and 49 seconds the players broke the existing Polish record to stake a claim for a new record. 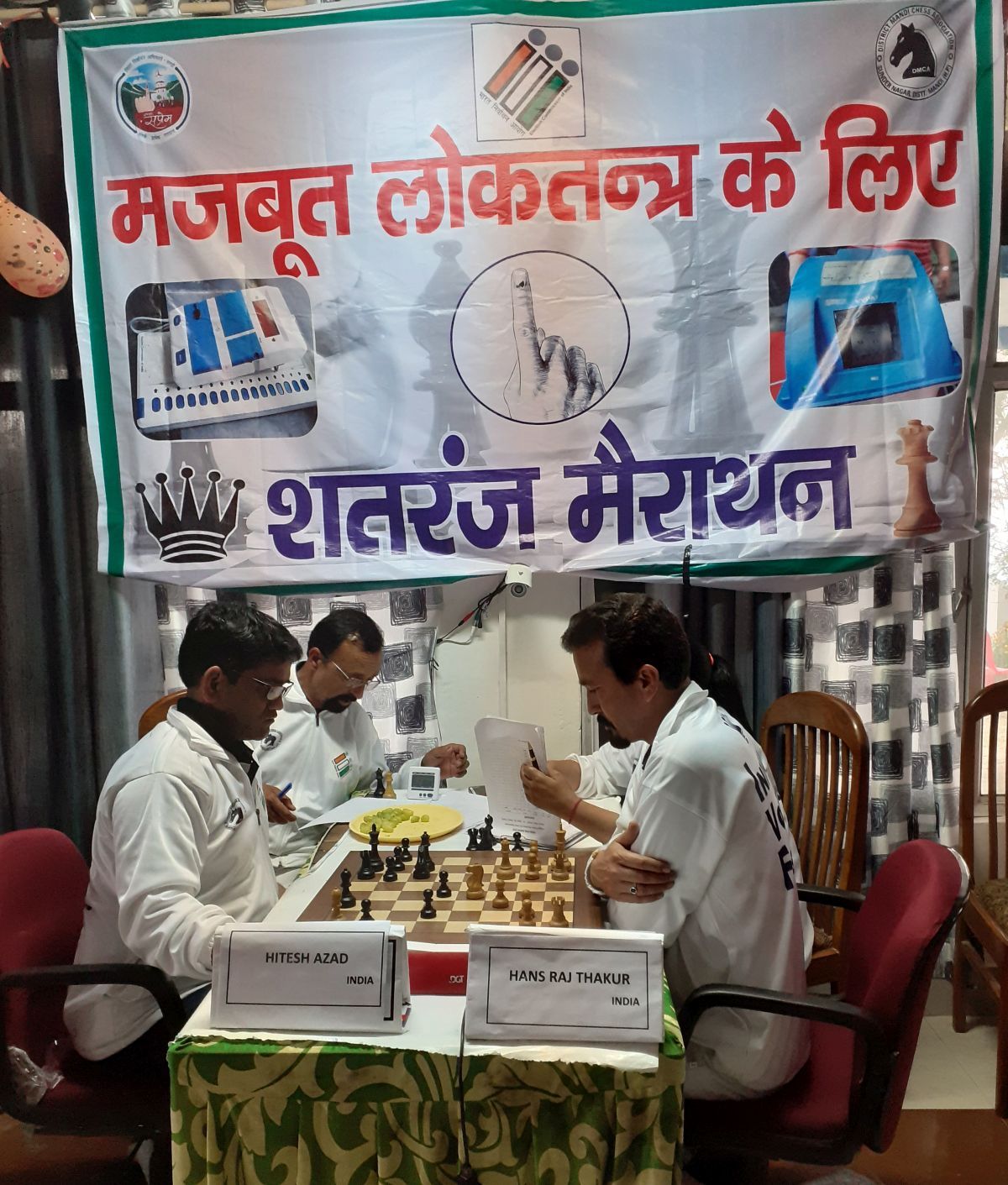 I browsed through the database of games and here are few statistics;

The players deserves our heartiest congratulations in every sense – for displaying extreme strength beyond what is believed to be normal.  I personally feel that this is one more feather in country’s glittering cap of chess achievements. The team of arbiters and volunteers lead by Ramesh Khachi also stayed awake throughout 2 nights to keep the morale of players going. We also had FA Sandesh Nagarnaik, who was monitoring the game from Mumbai, also staying awake with Vivek Mahajan to ensure that games broadcast went on smoothly. Thanks also to Asim Pereira of FollowChess who ensured uninterrupted broadcast of games. We now hope that this feat gets recognition by the Guinness! 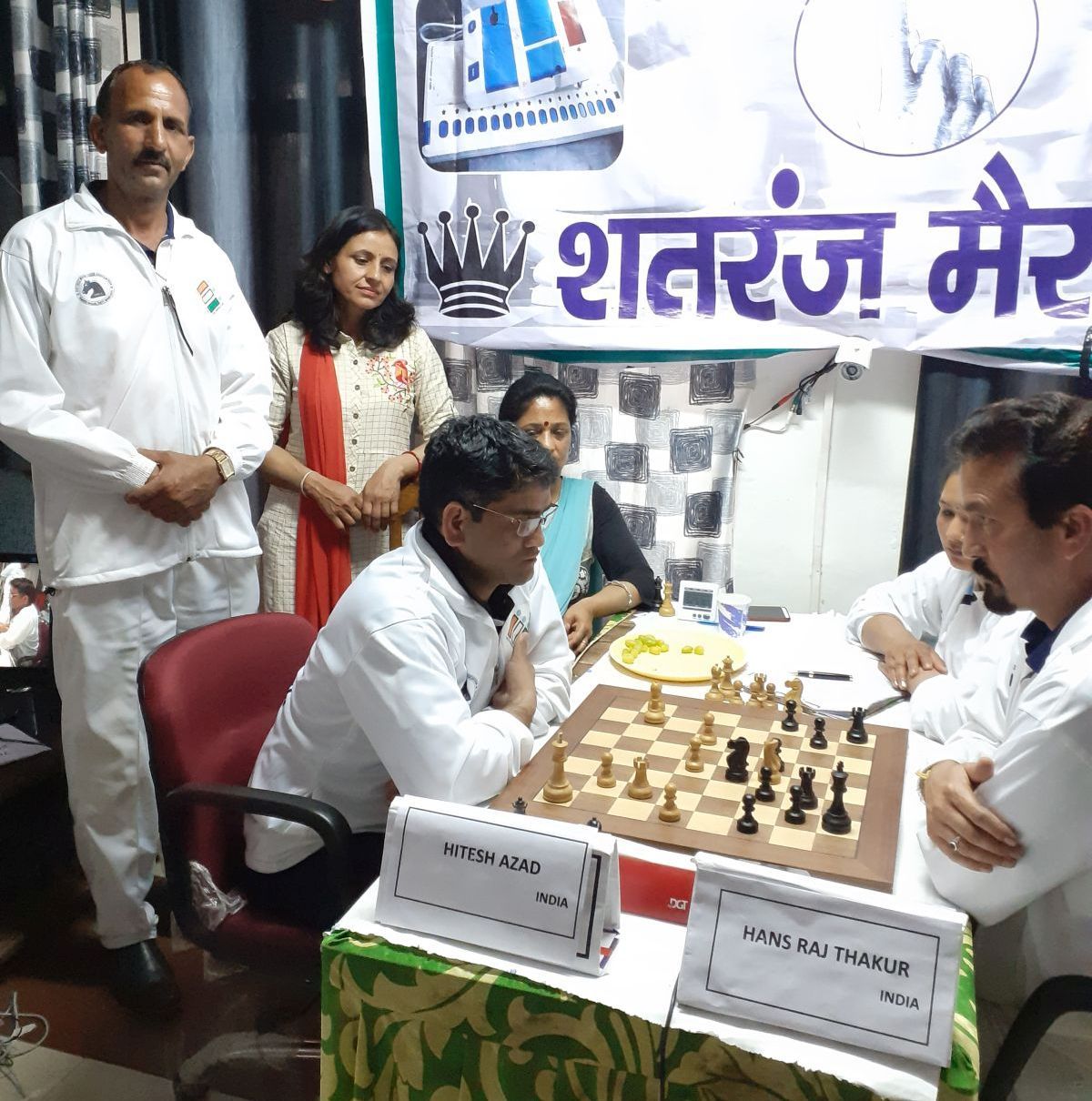 Ramesh Khachi (left), the organizer of the event with the players and volunteers

Replay all the 303 games 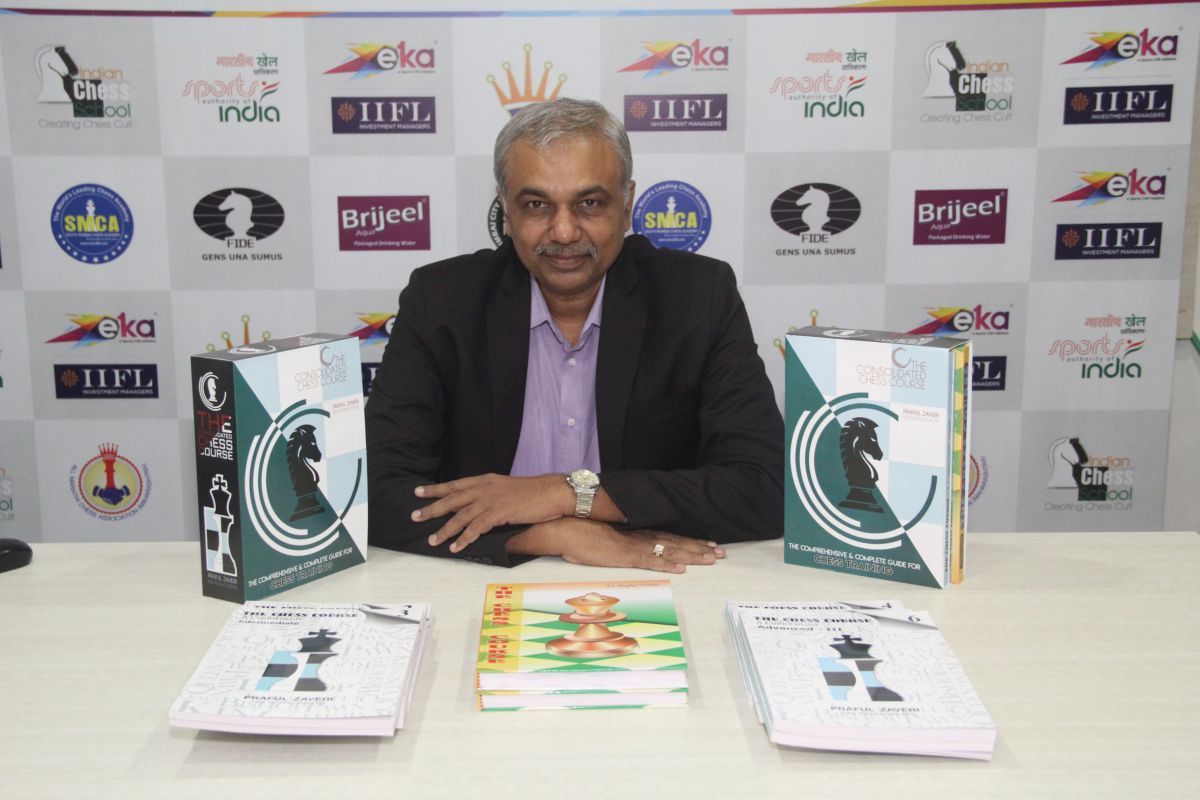