Save our friend Mangesh

Robert Frost once famously said that if he had learnt anything about life, it is that it goes on. People around the world die in a number beyond our imagination but people are born in even greater numbers -- the cycle will continue without waiting for you and me. But often, when you really want to help somebody, save a life, it is more a question of the will to help by joining hands than anything else. Mangesh Parab, a chess playing friend like we are, was diagnosed with cancer in 2004, and three operations later, he is free of his brain tumour, but with one last detail to attend to -- chemotherapy for a year. A physical battle with the emperor of maladies has failed to break the man, although he lies on the battlefield awaiting his comrades' help. He is fast running out of resources, and now the only way he can continue a year's treatment is with our help. An appeal from a fellow chess lover. 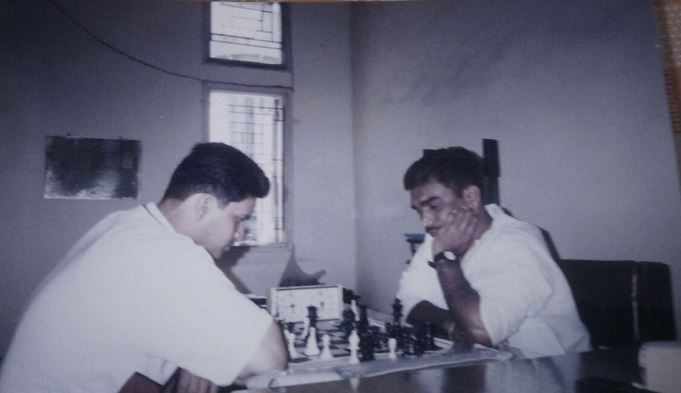 I became acquainted with Mangesh Parab nearly 40 kilograms ago (being a huge fan of GM Eduard Gufeld’s writings, I follow his system of counting!) during our frequent visits to the Zandu Canteen to play chess tournaments – considered the ‘Mecca’ of the Bombay’s chess life before it closed its doors in the year 2008, to give way to concrete jungle.

For a layman, the word ‘Zandu’ would be a pointer to nothing more ‘Zandu Balm’ the famous Indian Ayurveda brand to cure headaches or made more famous (infamous?) by Bollywood in the movie ‘Dabangg’.

However, for generations of chess players, including the young talented crop of players that followed us, ‘Zandu’ was a word revered in every sense for what it contributed to chess!

You ask an ‘old-timer’ like me and I can vouch that whenever I hear this word, I become nostalgic about the good old days! It takes me down the memory lane where it was a sheer delight to just play there and, at the same time be in the company of few veteran players, who played their game with repartee and running commentary simultaneously!

It was wonderful to hear the self-proclamation of octogenarian, Godbole Saheb at the top of his voice: 'Godbole is the greatest player India has ever produced!' Or, the unique style of K.C. Kar to declare checkmate - suddenly getting up from his seat with triumphant declaration 'K.C. Kar checks and mates!' We have always been taught (and now teach!) to examine all possible checks but the golden rule of Ganapthy was oft repeated at almost all the games by these fun-loving players with the punch-line: 'Ganpathy says, never miss a check!' It would be worthwhile to collect all these anecdotes and write a book on it but, that is for some other day and some other time.

Coming back to Mangesh, he too was a chess fanatic and dreamt of becoming something in chess. Like most of us, his passion for chess turned into a profession by training young kids in a period of chess boom fuelled by a great organizer, Vinay Shetty with the conduct of ‘Bournivta Inter-School Chess Tournament’ – an event, which changed the face of Mumbai chess for a decade from 1995 to 2004.

However, fate struck Mangesh in 2004 when he was diagnosed with a malignant brain tumor. It was indeed a big blow to any person who is in the youth of his life, vibrant with energy and eager to fly.

He was operated successfully with a positive note by the doctors that chances of relapse, if any, is a possibility only after 15-years or so. Mangesh took the fight to this disease by actively engaging in training young kids and, it appeared that spectrum of relapse has been left behind. However, as in chess, calculations do go haywire in life!

Mangesh had a relapse in the year 2012 when he was required to be operated for the second time followed by the third surgery in November 2015 when the entire tumor was successfully removed. But to see that this dreaded disease does not recur, he is required to take 12 cycles (monthly) of Chemo at Tata Memorial Cancer Hospital.

Not to count the physical toll, the treatment has created a big financial burden for Mangesh as he is no longer able to train and is now solely dependent on the salary of his wife. The insurance Medi claim has already been used for the operation, which had amounted to Rs.8,00,000/-.

As such, I call upon the chess fraternity to rise and ‘Save Mangesh’. You can contribute by sending direct transfers to the bank account of Mangesh:

Persons who are contributing to the ‘Save Mangesh’ campaign are required to mail me their details: prafulzaveri@hotmail.com or on my mobile: 9820 547 548.

We will be publishing the name of all the donors who have contributed (subject to their approval).

P.S.: A gentleman and his chess playing family, upon hearing this appeal, immediately came forward, giving Mangesh a month's buffer. Let's contribute and help a friend win this fight. It will make you happier than the money you spend on movie tickets.